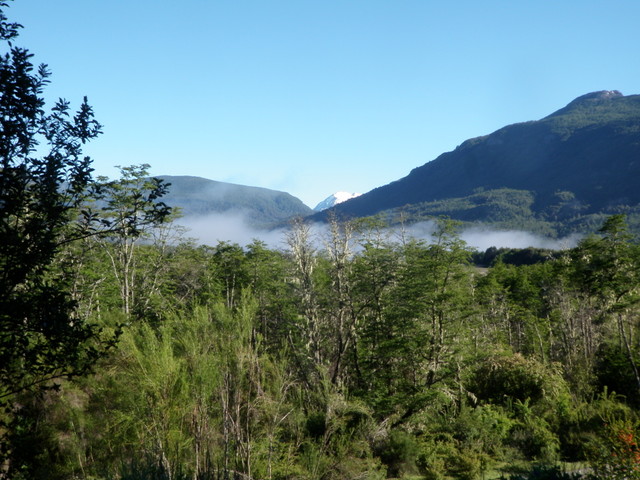 Saturday would be my last day of fishing in Argentina, at least in 2013. At dinner on Friday night Diego asked me if I’d be happy to return to Lago Roca with Todd, and I replied in the affirmative. Monte and Nikki planned to do the horseback fishing venture that Todd and Mary enjoyed on Thursday. I didn’t want to hold up Todd, so I woke up a bit earlier than normal, ate breakfast and emerged from the wader room ready to fish by 9AM. Todd was also ready to go, so we threw our rods and dry bags in the truck, and Santiago drove us the short distance of less than a mile to the beach along Roca where the small boat was moored. 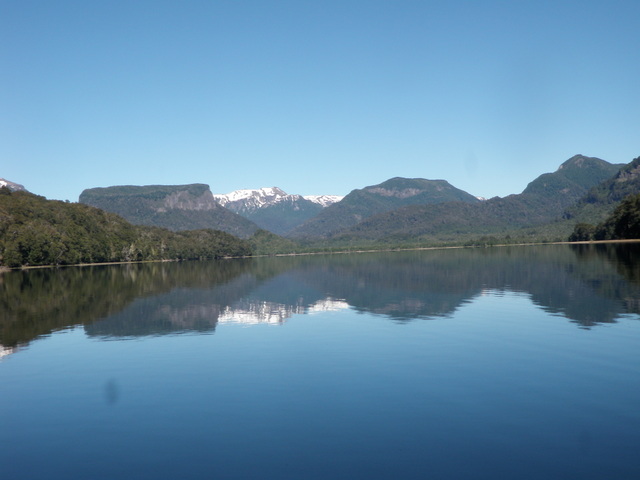 Saturday was shaping up to be the warmest fishing day of the week, and it didn’t take long for me to remove my layers and get down to just my fishing shirt. The temperature probably peaked in the 70’s in the afternoon. Todd began in the front of the boat, and I took my place on the rear platform in front of the motor, and we agreed to swap places after lunch. Diego spotted a mayfly on the water before we began, so he took one of my parachute hoppers and clipped off the legs and suggested I cast it as a mayfly imitation. This is how we began along the grass bed right next to the boat ramp, but after ten minutes or so, my fly wasn’t producing so Diego switched it for a deer hair dragon fly. 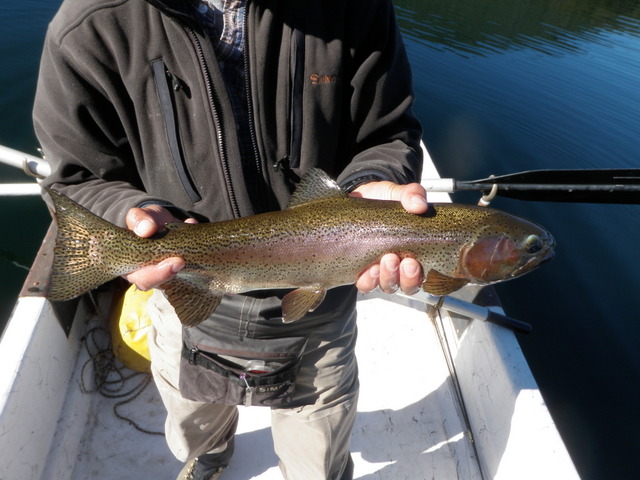 Dave’s First Fish on Saturday on a Deer Hair Dragonfly

The three of us moved away from the boat area and drifted to the lower shallow end of Roca where there were numerous areas with tall clumps of grass rising above the water. I connected with the first fish, a nice 22 inch rainbow and then followed up with a 20 inch brook trout, but then I didn’t see any action for an hour or so. There was a period where quite a few fish were rising, but Todd and I were getting refusals so Diego experimented with a few different versions of the dragon fly imitations to no avail. Finally we left the shallow grassy area and moved to some new shoreline, and Diego converted us both to sinking lines with a small olive streamer, and using this approach I landed another fine brook trout and rainbow trout. These fish were the typical 20 inch strong and colorful fish that I was used to catching in the Rio Manso drainage. 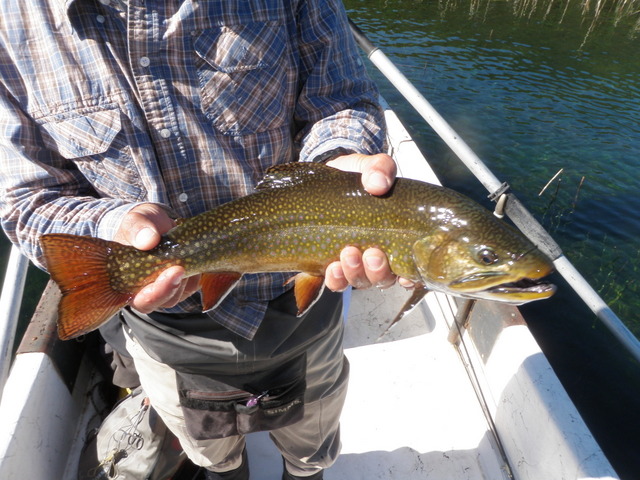 Another Huge Brook Trout Later in the Morning

I’d experienced a fine morning when we stopped for lunch at a spot where a small creek entered the lake; and while Diego set up, Todd and I fished the inlet area. I continued casting the beadhead olive streamer in the drop off on the left side of the current and landed a 20 inch brook trout and a 15 incher as I lifted the streamer just beyond the drop off. This fishing was similar to what I experienced on Friday, but after landing two fish, I was unable to entice further action. I was curious if I could repeat the success of the previous day with my articulated damsel fly, so I tied it on for a short while, and discovered it was not the hot fly on Saturday that it had been on Friday. I did see numerous dainty damsel flies and in fact more than I’d observed on Lago Fonck. 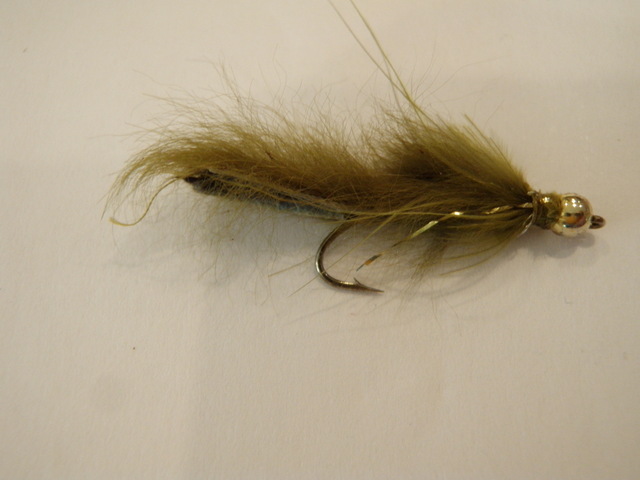 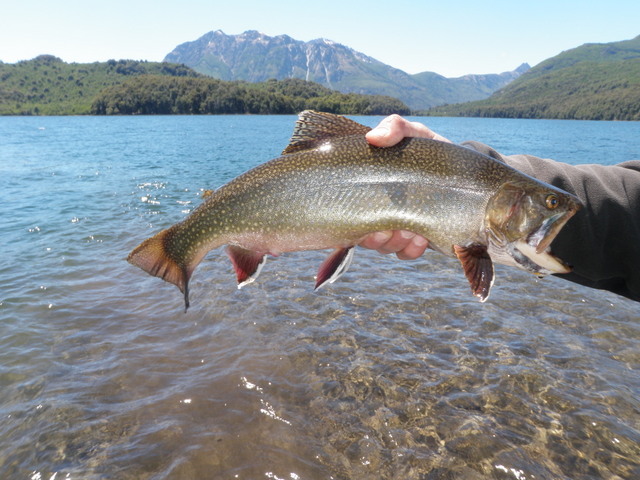 A Fat Brook Trout Landed Near Inlet to Lago Roca

After lunch with the sun bright in a blue sky and the wind beginning to kick up, Diego decided that we would drift the weed beds. I remembered doing this briefly on Tuesday at the very end of the day when Jane and I were with Matias. Roca contained numerous weed beds, but we approached the largest one that stretched across the lake roughly 1/4 of the distance up from the launch area. From a distance the weed beds looked like wide brown ribbons in the clear aqua colored water. A dense cluster of long aquatic plants with wide leaves grew from the bottom of the lake to within six inches of the surface, and the fish seemed to congregate along the edges.

Todd was having some success with a Fat Albert foam fly with rubber legs, but Diego rigged up my four weight Orvis Access rod with a different foam attractor. Todd and I had switched our positions as planned after lunch so I was now in the bow of the small boat, and we began drifting over the weed beds. Diego positioned the boat upwind and beyond the part of the weed bed that extended furthest away from the shore and then allowed the boat to drift on a diagonal over the widest section. There were open spaces and troughs throughout the widest part of the vegetation. As the boat approached the weeds, Todd and I would throw 30-40 foot casts in front of the boat, and we were aided by a significant tail wind.

It didn’t take long before Todd began to experience some hot action on his Fat Albert, and he was having a great time fighting the hot fish with his five weight and pressuring them to keep free of the weed stalks. I meanwhile wasn’t seeing as many rises to my fly, but I did have my opportunities. Over the course of the afternoon we probably drifted over the weed bed area ten times; and each time that we’d finish, Diego would man the oars and row against the wind until we were once again above the weeds. As mentioned, I had my opportunities as I hooked but did not land five fish. One got off after being hooked for five seconds, so I didn’t feel too bad about that, but the others dove into the thick aquatic vegetation and wrapped the line around the subsurface vines.

The four weight just did not have the backbone to pressure these large fish and prevent them from entering the weeds, nor was it strong enough to horse them out once they made the dive. Toward the end of the weed fishing period, I decided to exchange the spool on my six weight from the sinking line to a floating line, and I began to cast a deer hair dragonfly on the heavier rod. I hooked a hard fighting fish on the bigger rod, but the increased leverage didn’t matter as another nice fish worked its way free of the fly in the weeds.

Finally in the late afternoon in the last 30 minutes before quitting I hooked and landed a 20 inch rainbow above the weeds. It was a fairly frustrating afternoon due to the lost fish, but I finally managed to overcome the vegetation and land a decent fish. It was now approaching 5PM, and Diego radioed the lodge so a pickup truck appeared, and we climbed on to shore, gathered our gear, and returned to the lodge. 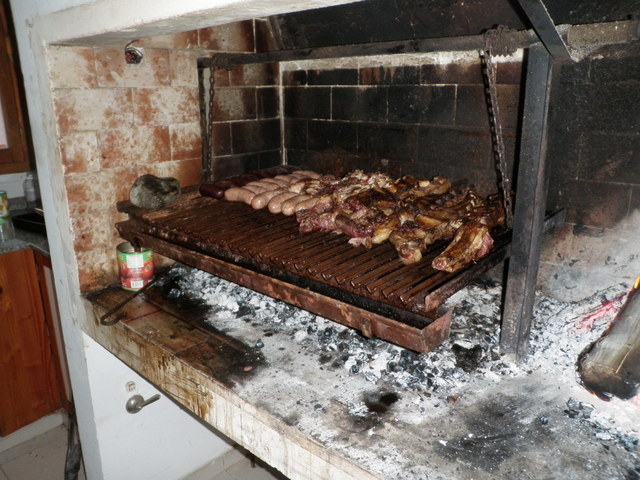 The owner of the lodge, Roberto Pandolfi, had returned from a business trip, and all the guests joined him on Saturday night for an Argentine asado. There was malbec wine and way too much food as we ate salad and grilled vegetables and four types of meat. There were steaks, chicken, and huge fat Argentine sausages. Todd had landed a large brook trout that swallowed the fly to the point that the fish was surely going to die; so we took it back to the lodge, and it became a tasty part of the asado. 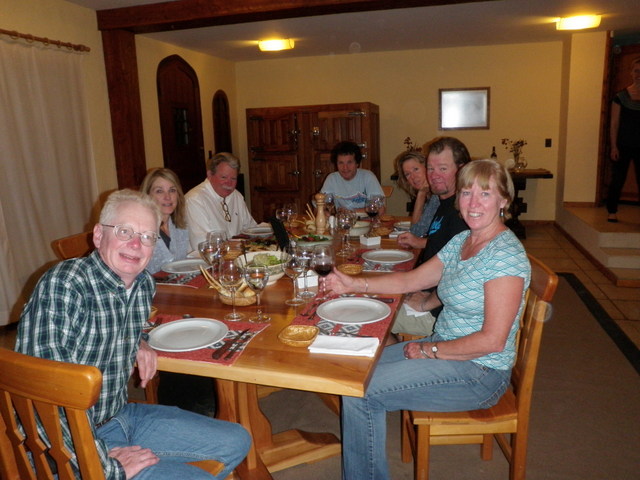 My inability to land some large fish in Roca was a bit frustrating, but it was still a fine ending to a great week at Rio Manso Lodge. I landed seven fish, with six being 20 inches or greater, and the weather was the nicest of the week. The asado and meeting Roberto were a nice way to cap off an excellent week of fishing.