Finally after five enjoyable days in Buenos Aires and Bariloche, Jane and I were prepared to reach our ultimate destination, Rio Manso Lodge. We repeated our routine from Sunday morning when we mistakenly thought we were being picked up, including a delicious breakfast at Lirolay Suites. Unlike Sunday, however, when we arrived at the office we met the two couples from California that would be joining us for a week at the lodge. We introduced ourselves to Monte Baker and his friend Nikki Collins and Todd Pershing and friend Mary Docek. At the scheduled time of 9:30 two trucks arrived in front of the office, and Jane and I climbed in the rear of one cab with a driver named Santiago and a passenger named Matias. We would later discover that Matias was one of our guides. The other couples climbed aboard the other truck, and we were on our way to Rio Manso Lodge.

The trip lasted 1.5 – 2 hours, and we had to reach a certain point before 11AM, as the road was open to only northbound traffic between 11AM and 1PM, and we were traveling south. When we reached the stretch of road that was one-way, it was easy to see why, as the dirt road narrowed to barely one lane and climbed high above a large lake with a monster drop off on the outside with no shoulder to serve as a margin of error. We paused at one point where we entered the national park so that our driver could purchase admission tickets for us visitors. Finally after a week of anticipation we crossed the crystal clear Rio Manso River and then made a left turn and entered the parking area of the lodge. 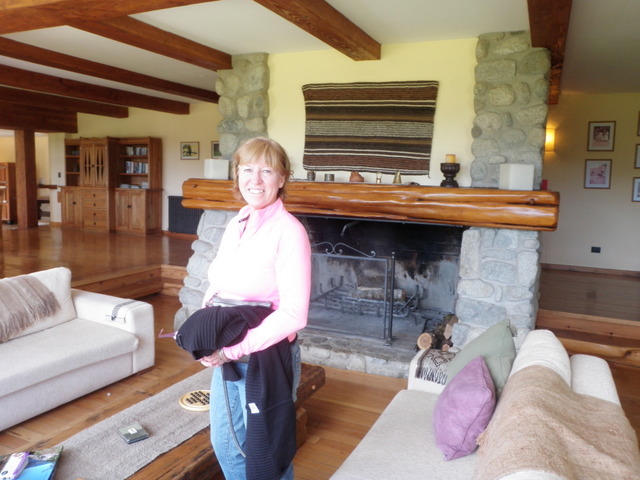 The lodge was a beautiful two story building constructed with natural logs and perched on the top of a hill with gorgeous views all around. The staff unloaded our luggage and took it to our assigned rooms while Jane and I entered the lodge and were introduced to more staff members. We went through the fishing area to the great room where a large fireplace was the centerpiece, and we were immediately offered drinks. After a brief amount of time to tour the impressive facility, Diana, our concierge for the week, announced that the fishing members of our group should prepare to fish. The guides would be waiting outside when we were ready. This was music to my ears.

I hurried upstairs and gathered the necessary gear from my luggage and returned to the wader room where I organized my fishing belongings into a dry bag and pulled on my waders and wading boots. The wind and chilly temperatures we experienced in Bariloche extended their reach south to Rio Manso as apparently a cold front had moved through on Sunday, so I wore two layers plus a raincoat to serve as a windbreaker on top. When I was prepared, I stepped outside and was greeted by Matias, the very same person who rode in the truck with us from Bariloche. Matias first asked what types of rods and lines I had, and after hearing I had a 6 weight with a floating line and an interchangeable spool holding a sinking line, he suggested I configure the six weight with the sinking line and also rig my four weight with a floating line. 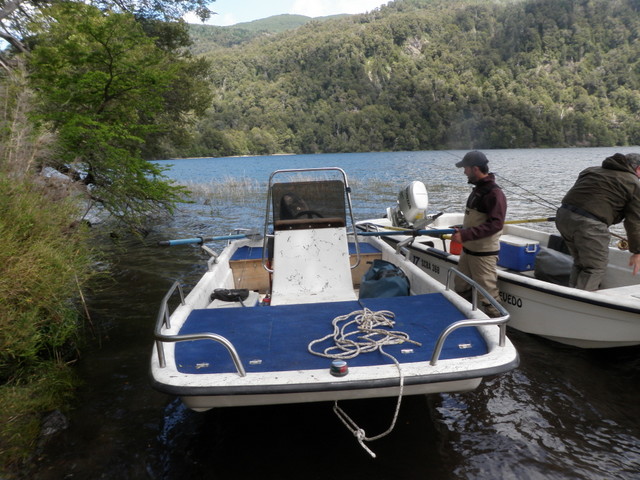 Our Boat for Fishing Lago Fonck on Monday

We threw all our gear in the truck and jumped in, and then the driver transported us a short distance on a rough dirt road to the shores of Lago Fonck. It probably took 20 minutes to make this trip, and when we arrived Monte and Todd were already assembling their rods and preparing to fish with their guide Niko. There were two flat bottom boats pulled up on the shore with outboard motors in the rear and oars positioned in the center position. Carpeted casting decks were evident in the front and rear of the boat. While Matias helped launch the other boat with Monte and Todd, I assembled my rods, and when Matias returned his attention to our boat, I was prepared and excited to begin my fishing adventure in Patagonia.

The wind was gusting and the cool temperatures that probably never surpassed the high 50’s cut through my layers. I was wishing I’d brought a fourth layer as ridiculous as that may sound for late spring in the southern hemisphere. The other boat appeared to head immediately to the larger Lake Fonck so Matias motored a short distance, and we began fishing not too far from the boat launch area. Matias instructed me to begin with my four weight, and he tied on one of the chubby Chernobyls that I’d purchased. It had two large cream colored poly wings on top of a tan foam body and a dubbed yellow tan abdomen. This fly didn’t provoke any action so after a brief trial Matias clipped it off, sifted through my three fly boxes, and much to my surprise tied on one of the Chernobyl ants that I tied myself. This was rather flattering, but would it work?

It didn’t take long before I hooked a small rainbow, but halfway between the point of take and the net it escaped. I lost my first South American hook up, although I wasn’t really disappointed because the rainbow was probably an eight inch fish. I continued casting the Chernobyl with the pink foam indicator on top and eventually spotted a rise, set the hook, and felt significant weight. Unfortunately this fish after leaping from the water made a sharp move away from me and snapped off the fly as if the hook was a minor annoyance. I was quite disappointed with this turn of events because this fish carried some significant weight, and I was now 0-2. Matias consoled me, but also admonished me for trying to pressure the fish immediately upon hook set. He suggested that I set the hook and then lower the rod and allow the fish to take some line before stripping or reeling in line. This sounded reasonable, but I was in an extreme adrenalin fueled state trying to land my first Patagonia fish, so I took some deep breaths and tried to relax. It was very difficult. 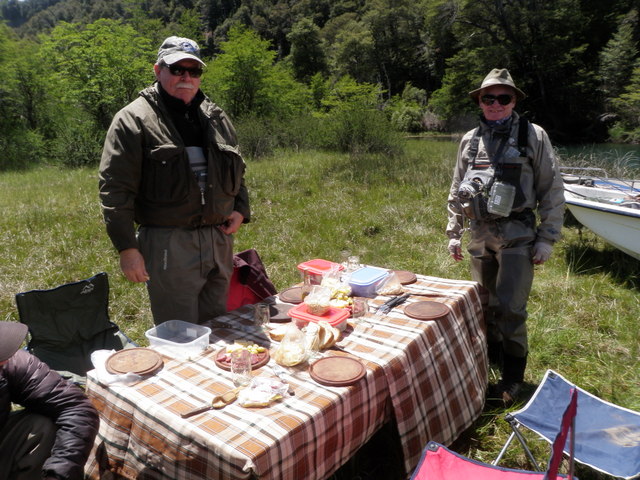 Just before lunch we drifted into a small cove on the east side of the lake, and as I cast I spotted a dark image slowly cruising a couple feet out from the bank. I semi-calmly picked up my fly and cast it five feet ahead of the direction of the cruiser. I held my breath as the fish swerved slightly to the right and elevated a bit, but it was a refusal as the fish dropped back a few inches and passed my offering. Matias moved the boat a bit further so I could cast under some overhanging branches, but then we retreated to a nice grassy beach area so he could test the firmness of the ground and grass as a lunch location. It wasn’t long before Niko, Todd and Monte arrived, and the guides set up the tables for lunch. Niko fired up a grill and cooked steaks, and Matias got out the appetizers and poured glasses of wine. I continued to cast from shore to the area where I’d seen the cruiser, and Monte walked further along the shore to the place with the overhanging limbs. He was stripping a white streamer and hooked and landed a nice brook trout while the rest of us looked on.

I clipped off my Chernobyl ant and tried a size 14 caddis while we waited for the guides to set up lunch, and then I spotted a solitary mayfly, so I tried one of my size 16 gray comparaduns as a callibaetis imitation. Nothing worked, so I put my rod in the boat and joined the others for lunch. The lunches were amazing with wine, beer and water; appetizers, salad, a main course and dessert. I don’t typically eat dessert at lunch and dinner, but at Rio Manso I was consuming sweets at breakfast, lunch and dinner.

After lunch Niko and crew returned to the large upper lake while Matias and I continued to prospect the edges of the small lake. The wind really kicked up in the afternoon, and Matias felt we were better off in the more intimate and protected small lake, and I could see merit in his logic. In addition because of the significant wave activity, he decided to go to streamers and subsurface techniques. He looked at my fleece wallet and much to my surprise selected a gray ghost, so I tied that on my six weight sinking line and fished it along the edges of the lake. It would have been a thrill to catch a fish on this streamer that I tied 20 years ago, but unfortunately it didn’t produce.

Matias changed tactics once again and fired up the outboard, and we bucked the waves and wind and went through a small channel that connects the lakes and stopped at the very southern end of the large lake. He pulled out the fly box containing flies purchased at Royal Gorge Angler and extracted a large olive streamer that had a tan rabbit strip and dumbbell eyes and attached this to my line. I began chucking this weighted hunk of fur toward the reeds that lined the south shore. I was having difficulty getting the fly to the surface because of the sinking line, so Matias demonstrated how to make a roll cast to bring the fly up and then quickly backcast twice and then shoot line on the final forward cast. This greatly improved my efficiency, and I finally felt something hammer my fly so I set the hook and played a 15 inch brook trout to the net. I was pretty excited with this first catch, but would later realize this was small compared to the average Rio Manso lake fish. 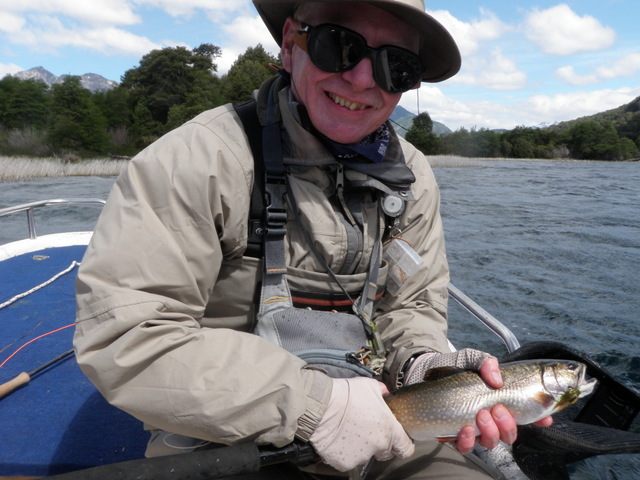 After this success I worked the streamer for a couple hours with no success other than refinement of the roll cast and backcast routine. By 4PM my arm, back and shoulder were beginning to ache so we returned to the smaller more sheltered lake, and I switched back to the four weight with the Chernobyl ant. Matias rowed us into position upwind of a shallow cove with several long clumps of reeds and tall grass protruding from the water. I began to shoot long casts into the reeds or right in front of them using the strong tailwind and finally began to see success. Between 4PM and 5:30PM I landed four nice rainbow trout in the 16-20 inch range on the Chernobyl ant. After covering the inner edge of the weeds, Matias allowed the wind to blow the boat over top of some fairly dense grass and reeds so that I could place some long casts in a small but deep lagoon bordered on all sides by vegetation. I had a refusal from a nice fish in this area and then landed a rainbow. 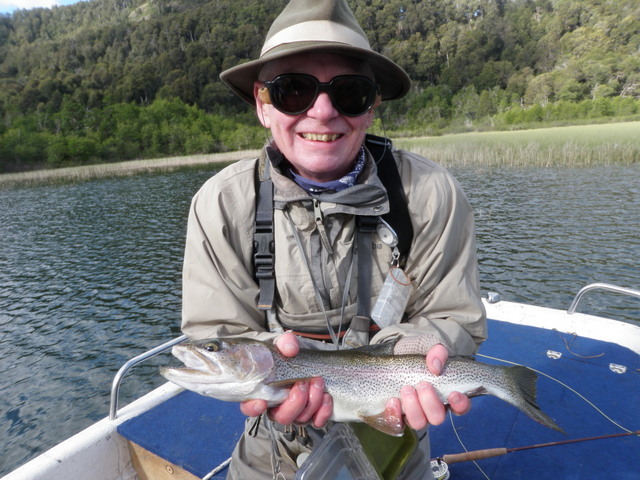 By 5:30PM I was quite weary and chilled so Matias radioed the lodge and a truck arrived to transport us back to a roaring fire. Jane was there to greet me after getting acquainted with the other non-fishing guests. The weather provided very difficult conditions on Monday with cold temperatures and strong wind, but I’d managed to land five decent fish and acclimated to my guide and the fishing methods of Rio Manso. The fishing wasn’t what I expected, but it was only day one and surely the weather and temperatures would improve. Would they?