Jake Chutz is the Sales Manager for Montana Fly Company, and he invited me to join him for a day of fishing on the Elk River near Fernie, BC in August. We floated the river from Hosmer to Fernie on 8/8/2014, and we used a Jake’s gulp beetle nearly the entire time. I landed twenty fish over the course of the day, and all but one or two succumbed to the size 10 foam terrestrial. The west slope cutthroats loved the fake beetle, and quite a few of my landed fish measured fifteen to seventeen inches.

This was my first introduction to Jake’s gulp beetle. My fishing partner, Jake Chutz, was the designer, so he obviously knew it was an effective imitation. During the morning and late afternoon we fished a beetle with a deep purple dubbed body, and during the middle of the day we switched to a version with a red body. Both seemed to produce equally based on my unscientific observation. 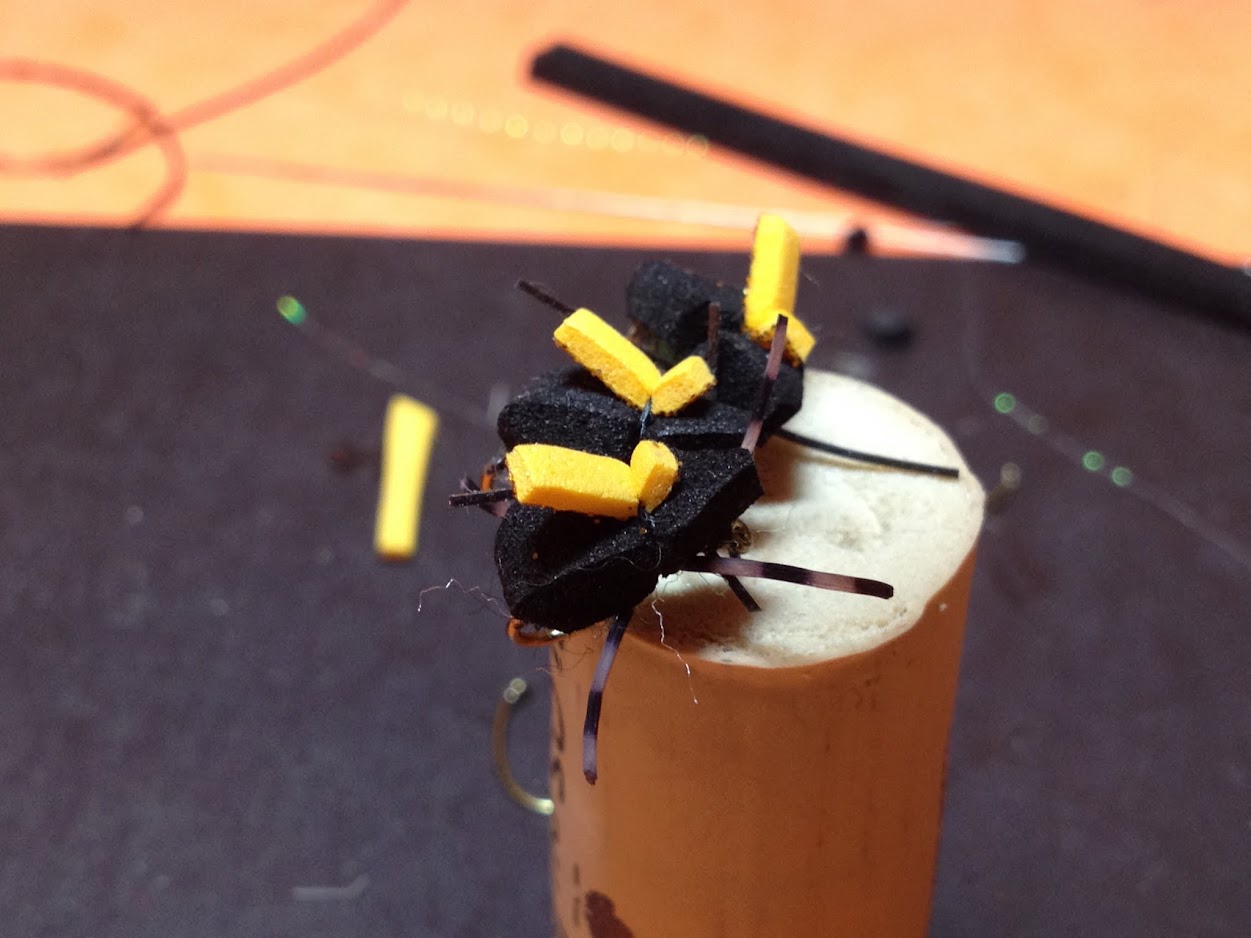 At the end of my trip to British Columbia, Jake allowed me to retain the size 10 gulp beetle with a purple body, so I stuffed it in my front pack. I gave it a try on the East Fork of Brush Creek when I returned to Colorado, but it did not produce any results. I essentially forgot about my gift fly until I visited the Big Thompson River on September 30. The resident trout began to refuse my Chernobyl ant, and I pondered what sort of adjustment to make. Jake’s gulp beetle leaped into my mind, and I knotted my sole size ten to my line. Much to my amazement the Big Thompson trout feasted on my lonely beetle with confidence. Since it was the only one in my possession, and I wanted to use it as a model to tie more, I was extremely protective and checked the line for abrasions frequently. This is something I rarely do, although I probably should.

I landed twenty-eight fish that day on the Big Thompson, and most gulped the beetle. On subsequent trips to Clear Creek, the same scenario played out where fish rejected the large Chernobyl ant but did not waver in their approach to Jake’s beetle. On two separate occasions I sat down at my vice and produced three size 12 gulp beetles, so I was adequately prepared for my remaining fall fishing trips. 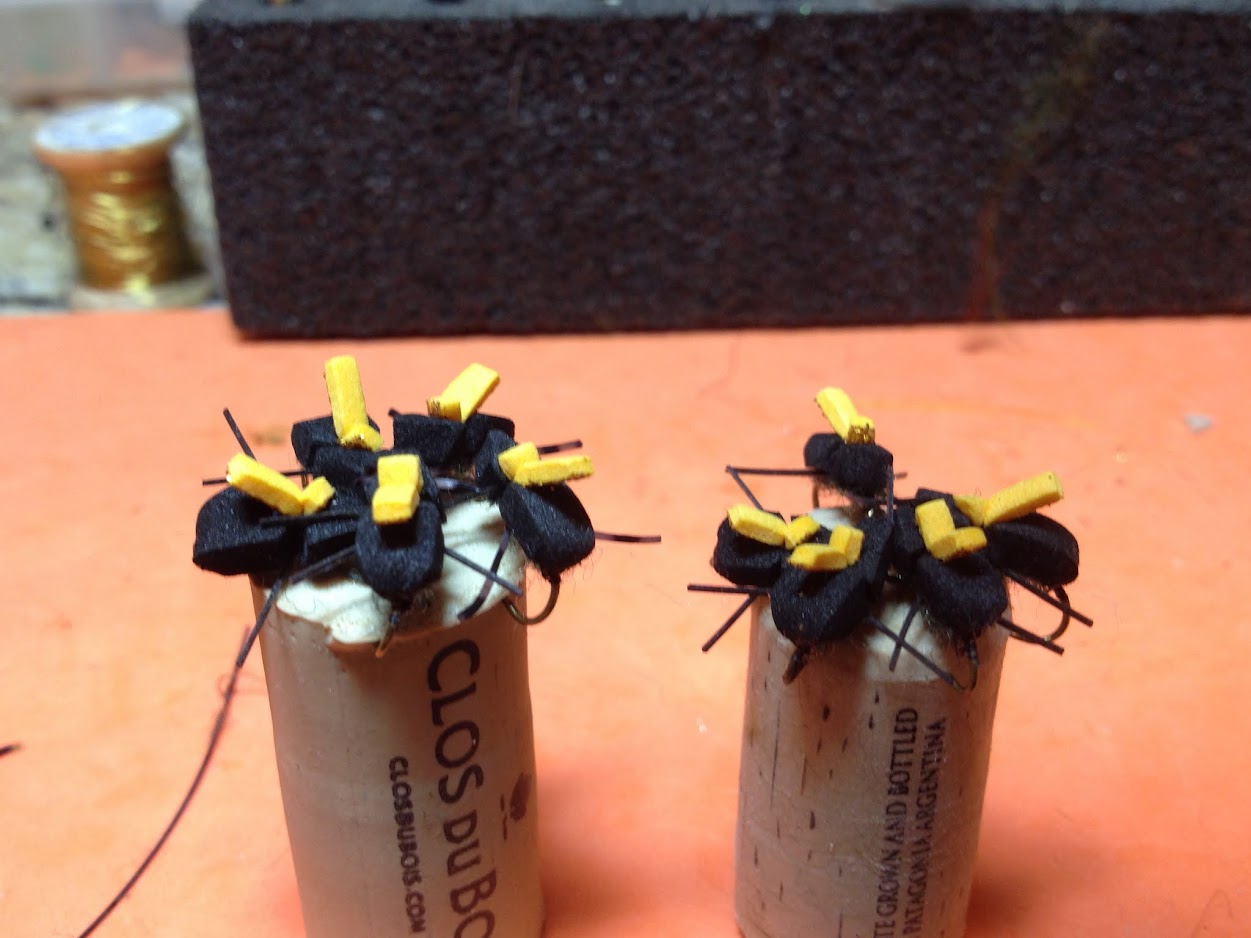 After a long and unseasonably warm fall in Colorado, some cooler temperatures and rain arrived on October 21. This forced me to take a break from fishing, and I used it as an opportunity to kick start my production tying in preparation for the next season. What better way to begin my tying than to crank out twenty Jake’s gulp beetles. I made ten size 12 beetles with a peacock dubbed body, and today I expanded my inventory with ten size tens. Half of the size tens have a peacock dubbed body, and the other five have a red body. The red body worked on the Elk River, so I needed to have some to test in Colorado. I’m also hopeful that the red body will be an answer to the phenomenon of a trout rising to a red strike indicator. 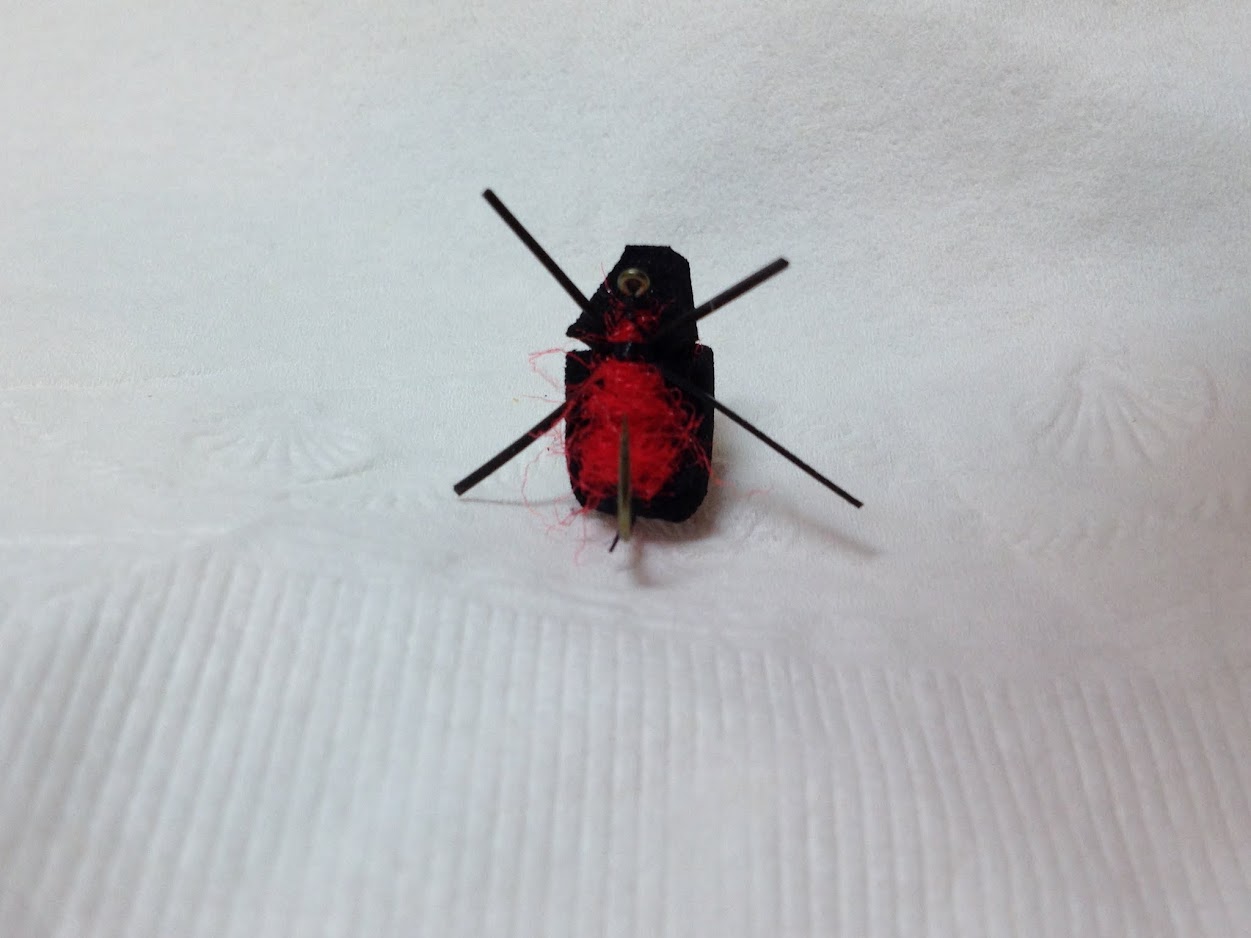 Since I did not have tying instructions, I developed my own through trial and error. Here they are if readers wish to try:

2. Attach black thread and wind it a good distance down the bend of the hook. This is important. If the tie down is too far forward, the fly will have too much bare hook shank visible after the foam is folded forward. I also coat the thread with head cement before proceeding.

3. Take a strip of black foam that is cut so that the width equals the hook gap. Create a V in the end that you will tie down.

4. Place the V portion of the foam on top of the thread wraps so that the non-tapered portion lines up with the beginning of your thread wraps on the bend, and then wrap the thread around the V portion of the foam and bind it securely to the hook. When you reach the end of the foam, wrap back to the starting point. I’ve started tying a whip finish knot at this tie down point, but do not cut the thread. Also I coat the entire foam tie down area with head cement. These are all steps that help prevent the foam from twisting around the hook shank after extended use.

6. Tie in two sets of fine rubber legs on either side of the hook shank where the thick dubbing tapers to thin.

7. Fold the foam forward over the top of the body and use your scissors to snip a slit on both sides at the point where the legs are tied to the hook shank. Be careful not to snip too deeply as you need a decent amount to remain to securely tie down the foam. I snip the side closest to me, and then fold it back to its original position and snip the opposite side across from my first slit.

8. Once the slits are created, fold the foam back over the top of the body and tie it down through the slits with three or four solid wraps.

9. Carefully cut off excess foam so that it ends just over the hook eye. Make sure your legs are out of harms way when you cut the foam..

10. Carefully create tiny notches where you made slits by cutting out a tiny amount of foam in front of the slit. Again make sure the legs are not in the way.

11. Turn the fly upside down and shape the small foam head by making angled cuts from the end back to the notches. Avoid snipping the legs as you do this.

12. Position the fly right side up, and tie in a narrow section of brightly colored foam as an indicator. I prefer bright orange.

13.  Move the thread underneath and make five wraps between the eye and the point where the foam is tied down underneath the head.

14. Whip finish and coat the thread wraps with head cement.

15. Trim the legs and indicator to the proper length. 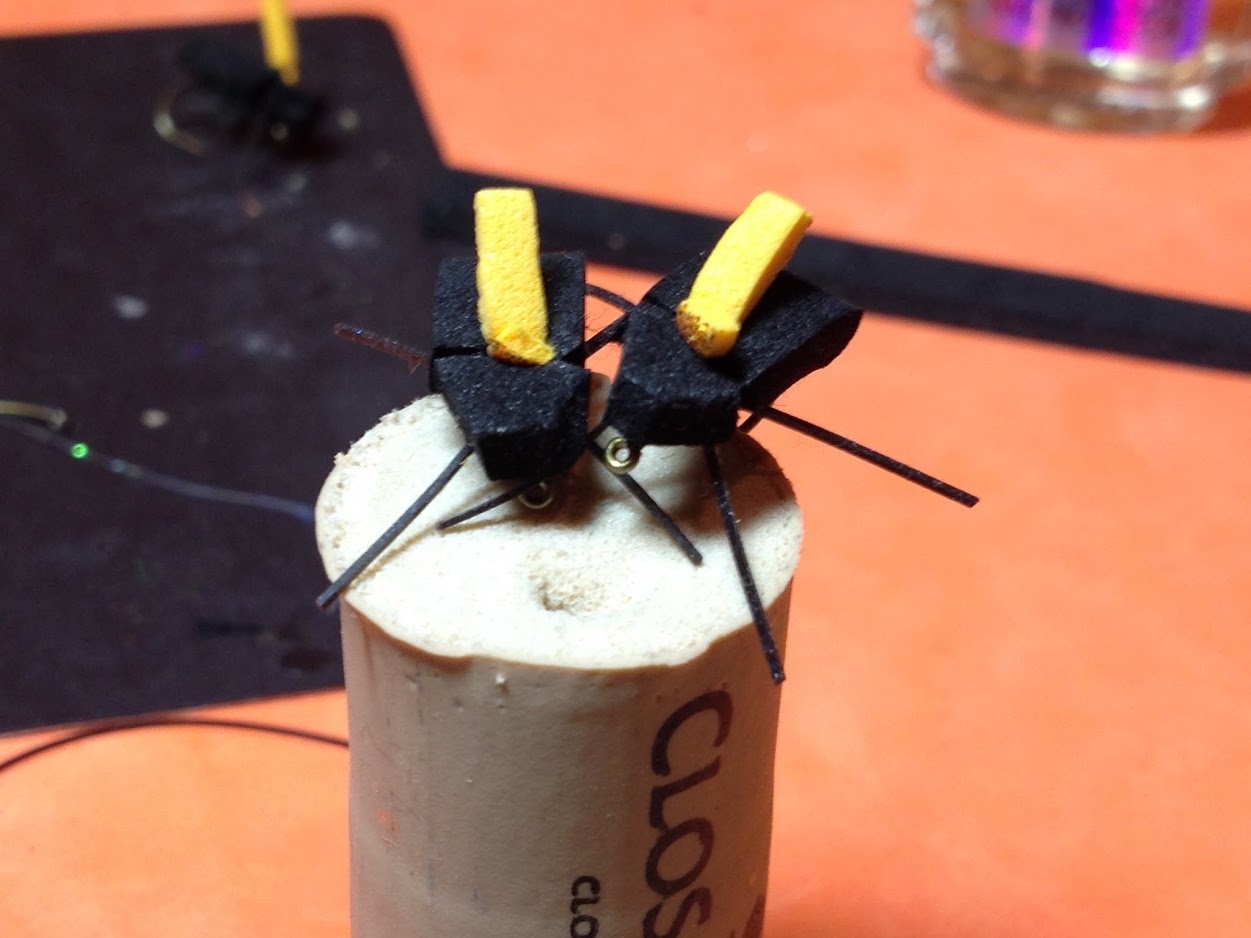