My expectations were low, and on Friday April 19 the end results confirmed my suspicions. After a superb float trip with our guide Charley on Thursday, Dave G. and I planned a morning of wade fishing, before we departed for our return journey to Eagle, CO.

Several known factors influenced my apprehension regarding our effort on Friday. The weather forecast suggested temperatures ten degrees higher than Thursday with no chance of precipitation. This translated to a bright sun and cloudless blue skies, and these conditions generally translated to challenging fishing. The blue winged olive hatch commenced at approximately 1:30 PM on Thursday, and the fishing from the drift boat was very slow until after lunch, when the small mayflies triggered the feeding habits of the resident trout. We were committed to departing by 12:30 in order to fulfill our obligation to arrive for dinner by 6PM. I suspected that our stream time would not overlap with elevated feeding activity. Nevertheless I was hopeful that we could connect with a fish or two in our limited allotment of time and based on our results of Thursday, we knew that some quality trout made the Green River their home.

After our fourth meal at the Flaming Gorge Lodge and second breakfast Dave G. and I checked out and drove to the large parking lot at Little Hole. Little Hole is seven miles below the dam and serves as the take out for float trips through Section A. We were already attired in our waders and fishing gear, and our rods were rigged with the three fly configuration created by our guide; so after paying the $5 day use fee we were on our way. Dave G. and I began hiking upstream using the Little Hole Trail, and we immediately encountered a cluster of bank fishermen. Several of these anglers appeared to be merely holding their claims to prime stream real estate with the expectation of a hatch in the future. This observation and the number of vehicles in the parking lot caused concern to occupy my brain waves. 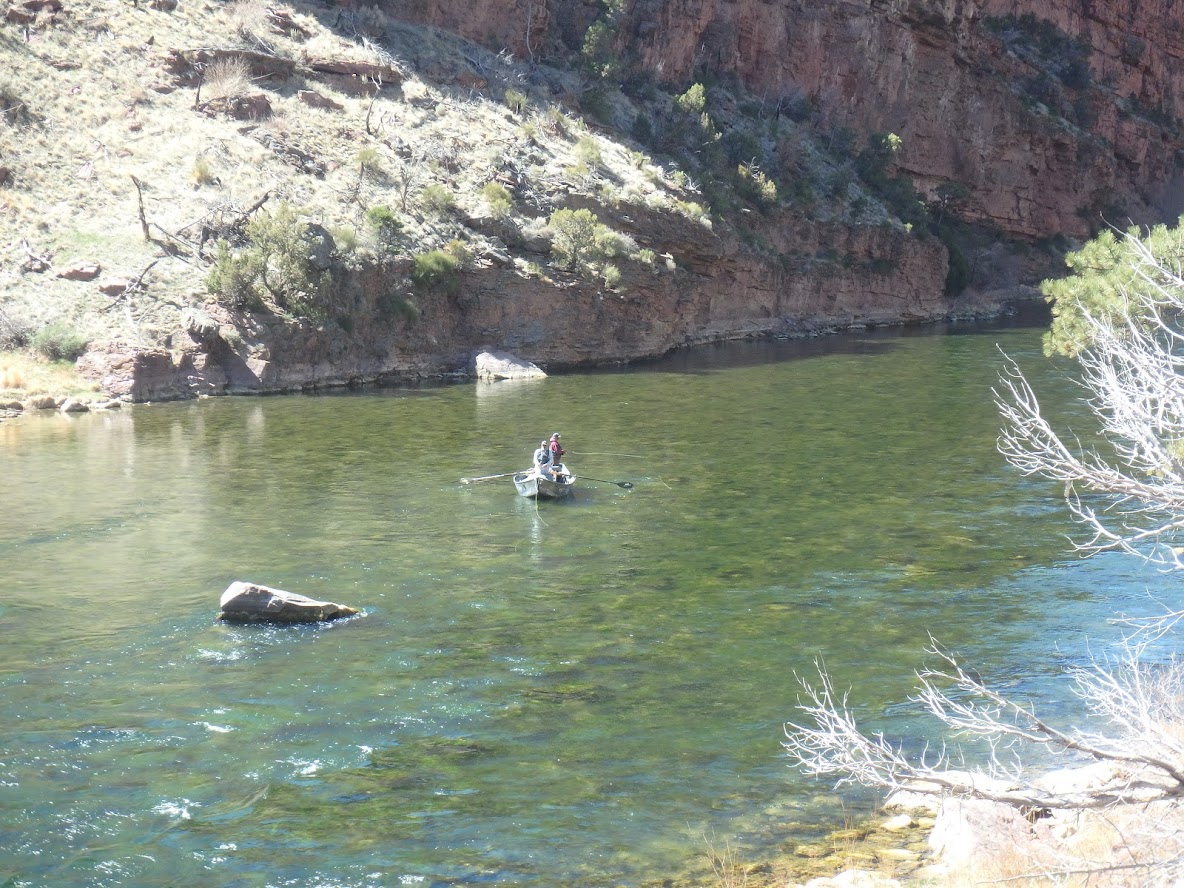 I set my Garmin watch on walk mode at the outset, so I knew, that we hiked for 1.2 miles, until we approached a decent stretch of water that was unoccupied. Dave G. and I decided to take advantage of the space, and we defined twenty-five yard sections to probe with our holdover flies from Thursday. All the flies on my line were of a similar genre. They contained tungsten beads and gray or olive bodies with a wire rib. In addition, two displayed short tails, and the top two flies were knotted to four inch droppers that angled away from the main line. I added a small clear thingamabobber near the end of the fly line, and I began to prospect my chosen beat.

I focused on smooth water, since Thursday’s experience demonstrated that the trout preferred slow spots next to faster runs. I made upstream casts with dead drifts, up and across lobs with a swing at the end, and casts directly across with some active manipulation. None of these techniques tempted a single trout. I reached the point where Dave G. entered, so I circled around him on the path and claimed a new section with promising water. When Dave G. reached my entry point, he also performed a circumnavigation maneuver. At this location I was twenty-five yards below him, when I noticed a severe arc in his rod. I paused to observe, and as I looked on, he manipulated a thrashing fish toward his net. I quickly retrieved my camera and shot a short video of the fish sliding over the lip of the net and the subsequent sag created by a surprise fish. 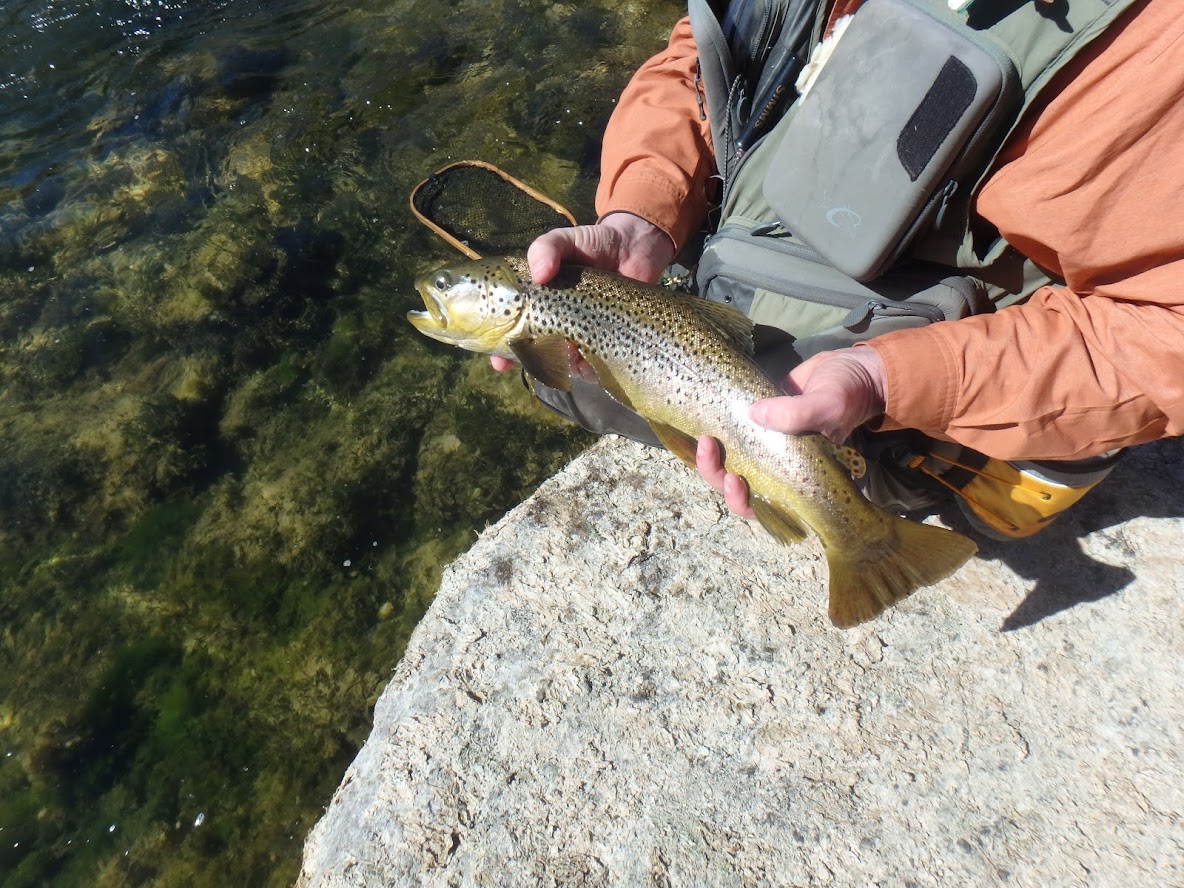 Dave G. asked me to take some photos, so I rested my rod and flies on a rock and made the short walk to his rock, where I snapped a pair of grip and grins. Afterward I resumed my futile efforts in the attractive water between us. I exited the river once again, when I arrived at the vicinity of Dave G.’s fine catch, and I once again cut to the trail and began another upstream migration. During this cycle, however, I encountered a large cluster of bank fishermen spread over a .2 mile section of the Green River shoreline. This area was adjacent to a pair of vault toilets, and I continued until I was beyond the last angler. I felt I was now safe to cut at a ninety degree angle to the river, so I did so and found myself at the tail of a gorgeous long shelf pool. Surely this attractive section would end my fishing drought on Friday, April 19. 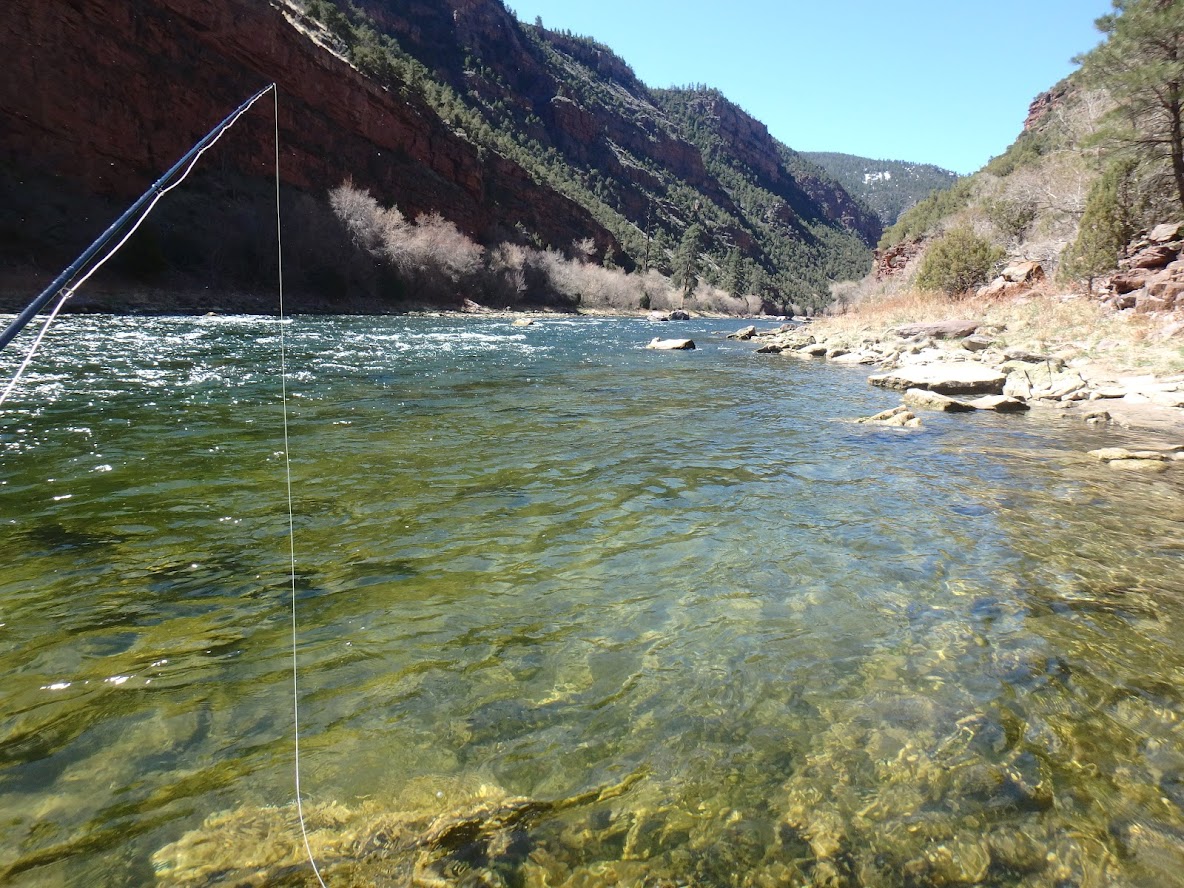 Looked Perfect But No Success

By now my line contained an ultra zug bug in the top position, a size 22 beadhead RS2 in the middle, and the baetis nymph that carried over from Thursday. I methodically covered the long shelf pool with drifts through the slow water and along the current seam, but once again my efforts to land a single fish on Friday were thwarted. When I reached the top of the pool, Dave G. arrived, and we concluded that it was time to begin our hike back to the parking lot in order to make the 4.5 hour drive and arrive at Eagle, CO in time for dinner.

I clocked the return hike and determined that we were 1.8 miles from the parking lot at our farthest point. I anticipated the high sun and the lack of insect activity, but I underestimated the number of wading fishermen above Little Hole. We basked in the sun and exercised our legs with a nice hike in a spectacular canyon, but I was unable to fool any brown or rainbow trout along the north bank of the Green River. I was not significantly disappointed, since my expectations were very low, and I reminded myself that Thursday was an outstanding day.