I last floated the Green River in northeastern Utah on 04/12/2002, so when my friend Dave Gaboury called to suggest we book a trip to celebrate his recent retirement, I responded with an enthusiastic thumbs up. I dug out my reports from earlier experiences, and a quick review revealed that the middle of April enabled us to encounter dense blue winged olive hatches. Armed with this information I contacted Spinner Fall Guide Service and booked a float trip for April 18, 2019. Spinner Fall was the very same guide service, that I used in the 1990’s and early 2000’s; and I was pleased to discover that Scott Barrus, my previous guide, was now the owner of the popular guide business out of Dutch John.

I drove to Eagle, CO on Wednesday April 17, and I transferred my gear to Dave G.’s car. Within thirty minutes we were on our way to the Flaming Gorge Resort, where we had reservations for Wednesday and Thursday night. On Thursday morning Dave G. and I hit the Flaming Gorge Resort restaurant for breakfast, and then we drove to the assigned meeting place in Dutch John, where we met our guide for the day, Charley. Scott was booked with other customers, so he assigned Charley to us, and we were quite pleased with the selection. 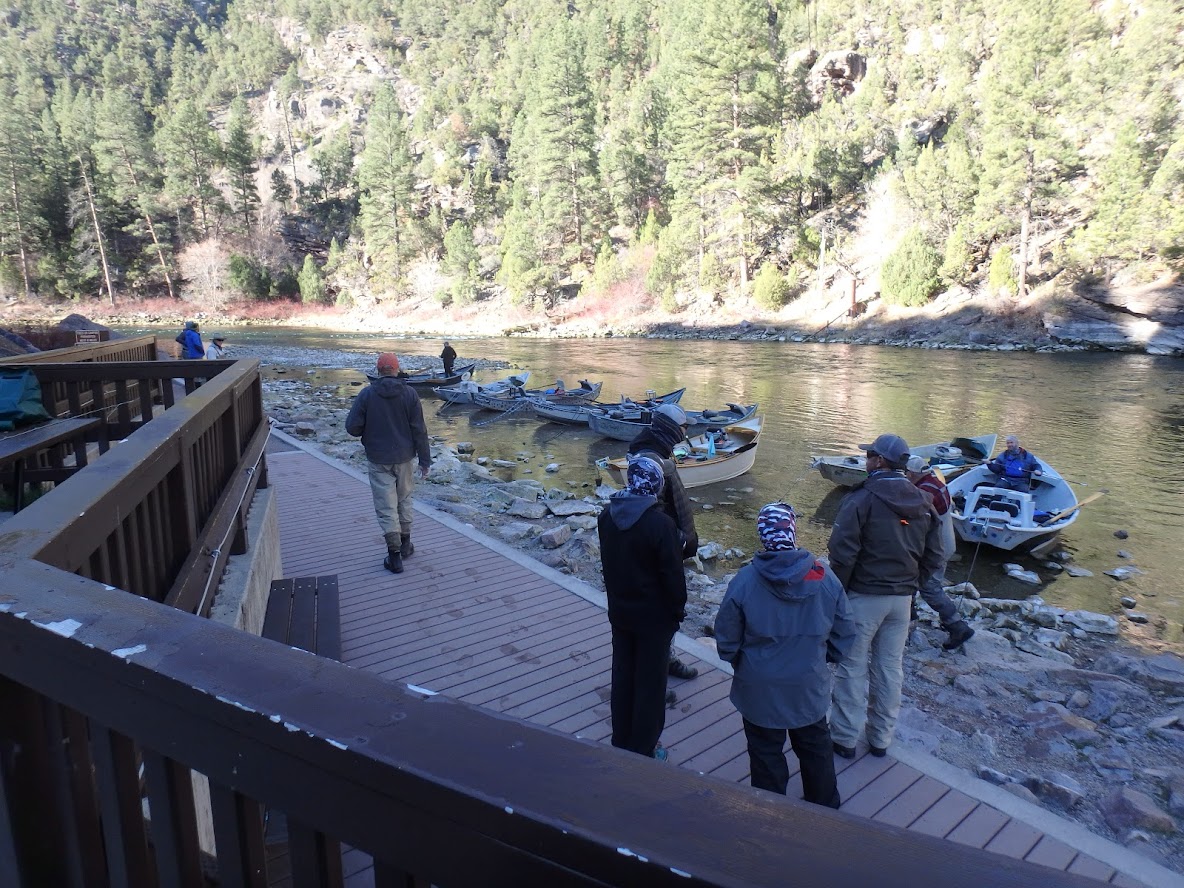 The temperature was in the low forties, when we launched below Flaming Gorge dam, and the thermometer peaked at sixty in the afternoon. Thursday proved to be a very pleasant day for a float through the canyon tailwater of the Green River. The sky remained cloudless during our entire stay on the river, as we drifted under deep blue skies and bright sunshine. Flows were reported to be 950 CFS, and according to our guide, Charley, this was low compared to historical averages for April. 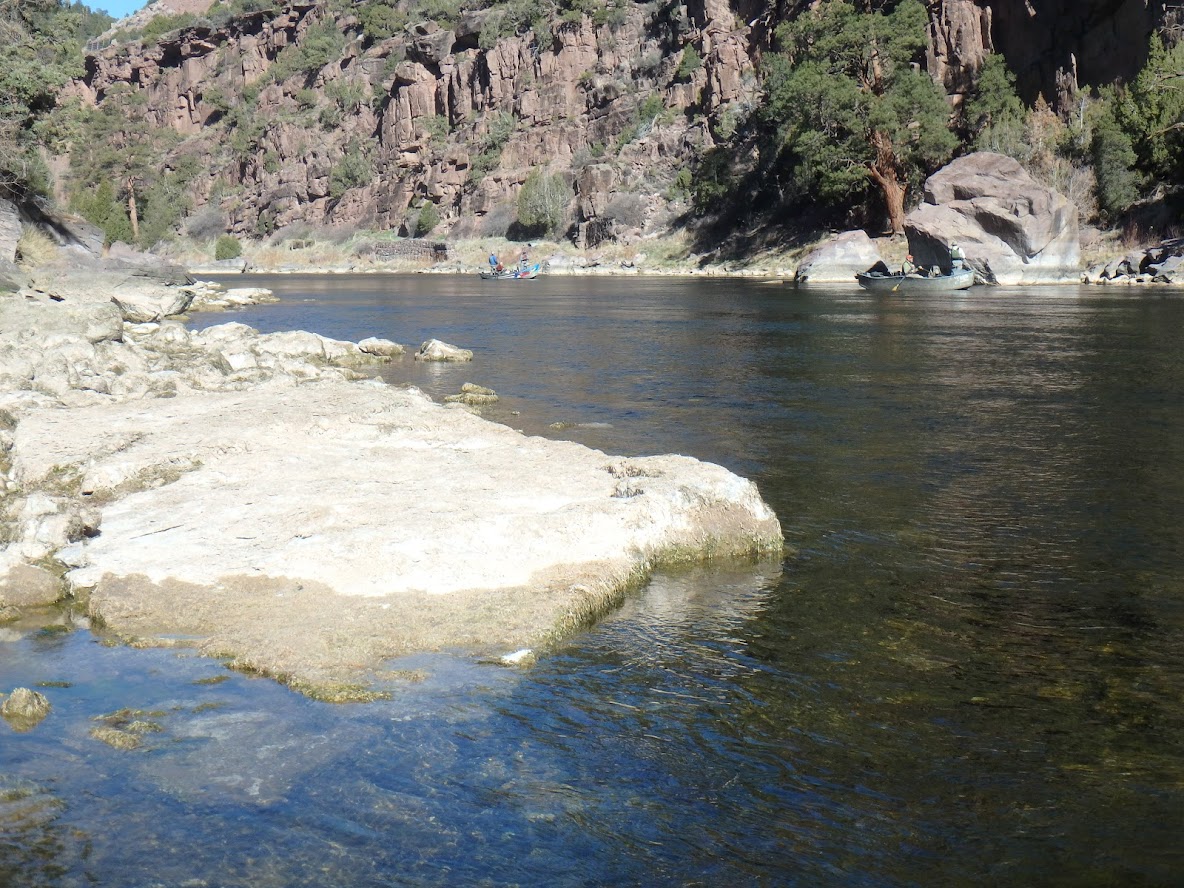 Dave G. occupied the bow of the Boulder drift boat, and I held down the rear for the morning session. Quite a few boats were lined up at the launch, and we departed in a pack. It was rare during our float, that we did not enjoy the company of at least one other drift boat. 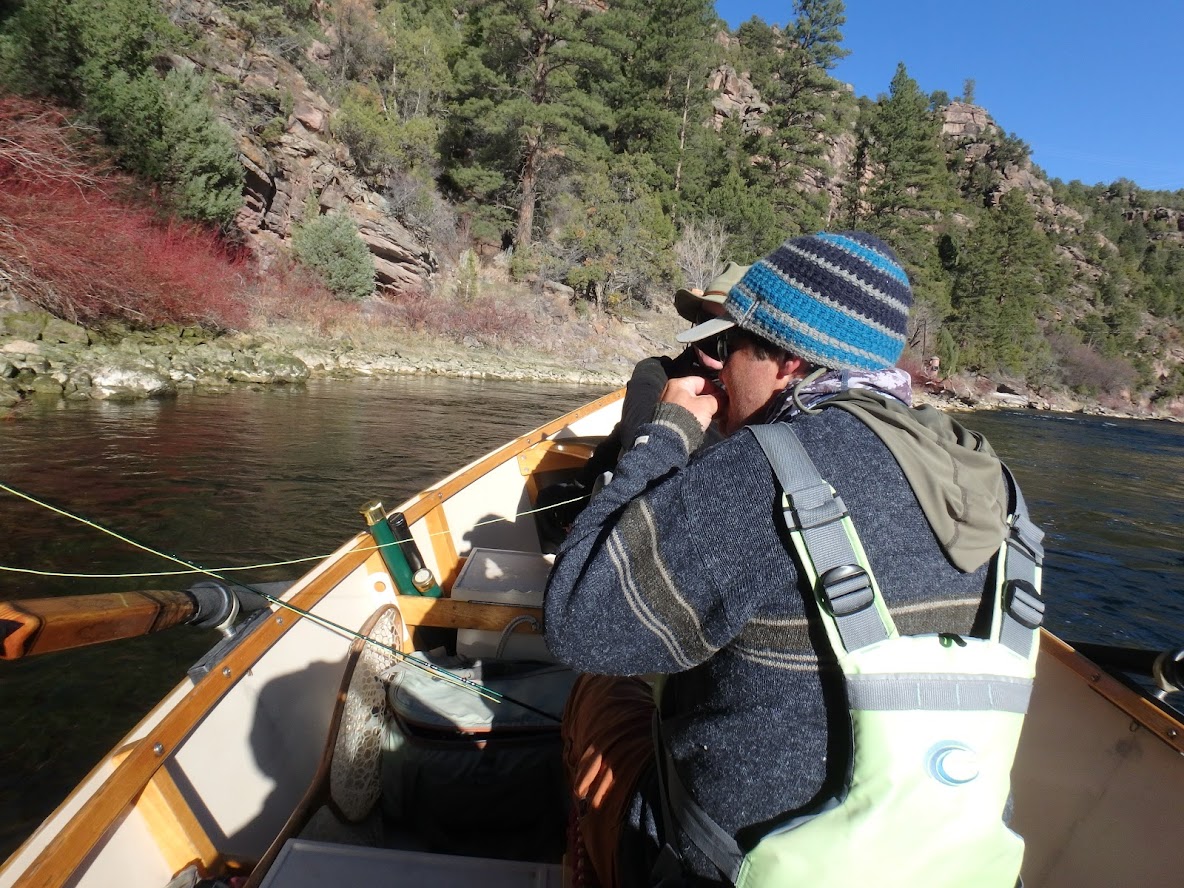 Charley rigged both of us with nymph setups. He attached an eight inch butt section of red monofilament to the fly line with a loop to loop lock. A small inflated water balloon served as the strike indicator at the end of the red monofilament section. Next Charley ran five feet of level 5X fluorocarbon from the indicator, and then he knotted two flies with tungsten beads to the fluoro. The upper fly was attached to one of the five inch tag ends of a surgeon’s knot. At eleven o’clock Charley reconfigured with a three fly arrangement, and in this setup two flies were affixed to surgeon knot tag ends. All three flies were small ribbed nymphs with tungsten beads. Two had tails and one was more representative of a midge larva. 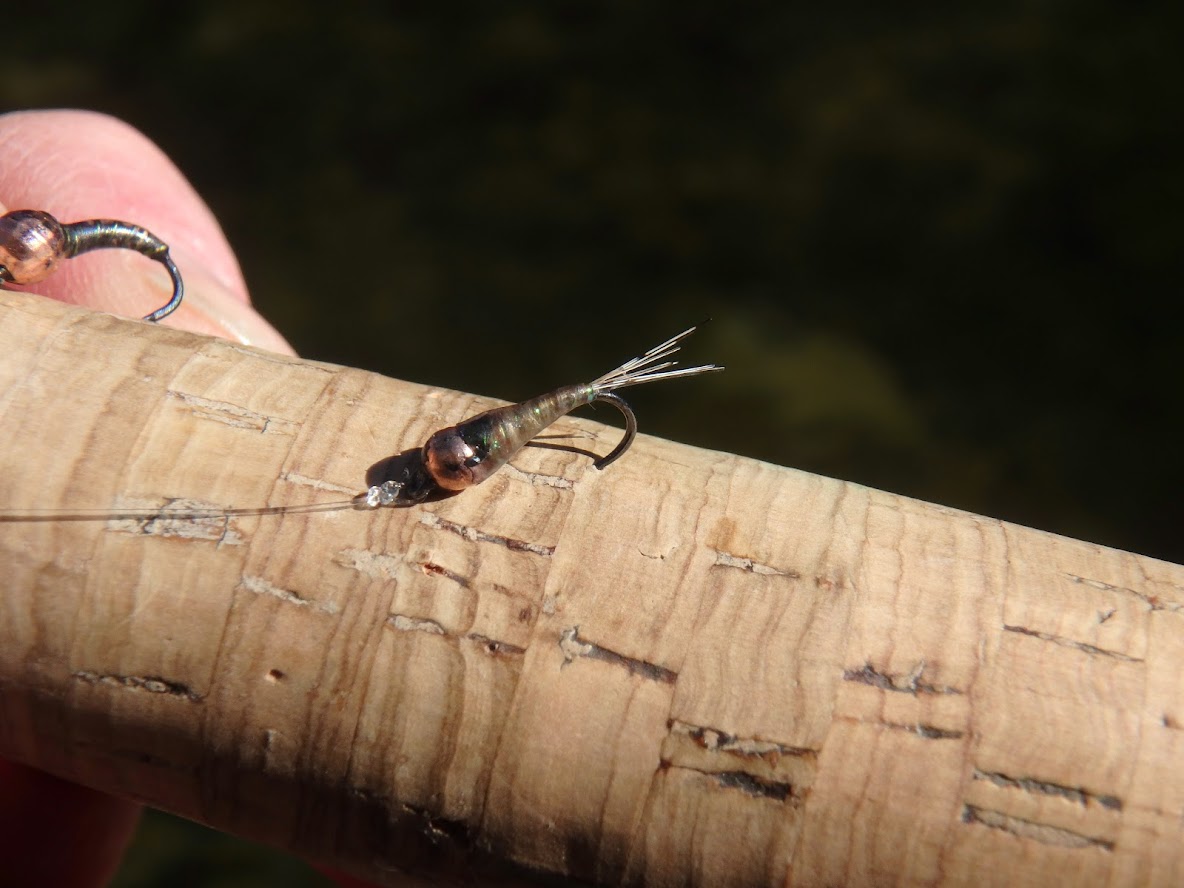 During the first hour I landed a gorgeous eighteen inch rainbow and a fourteen inch brown trout. In addition I experienced three temporary hook ups, but the late morning was a dead time consumed by hours of fruitless casting. 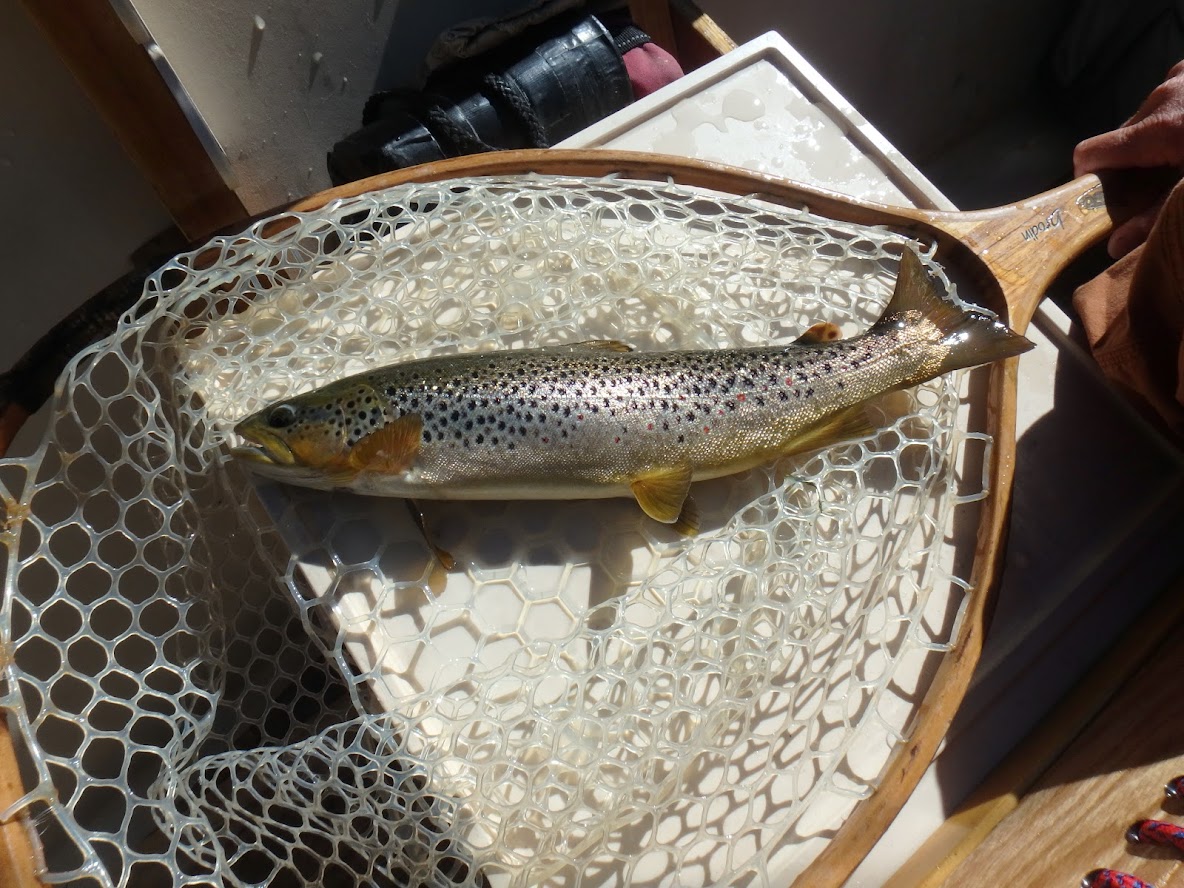 A Brown from the Morning 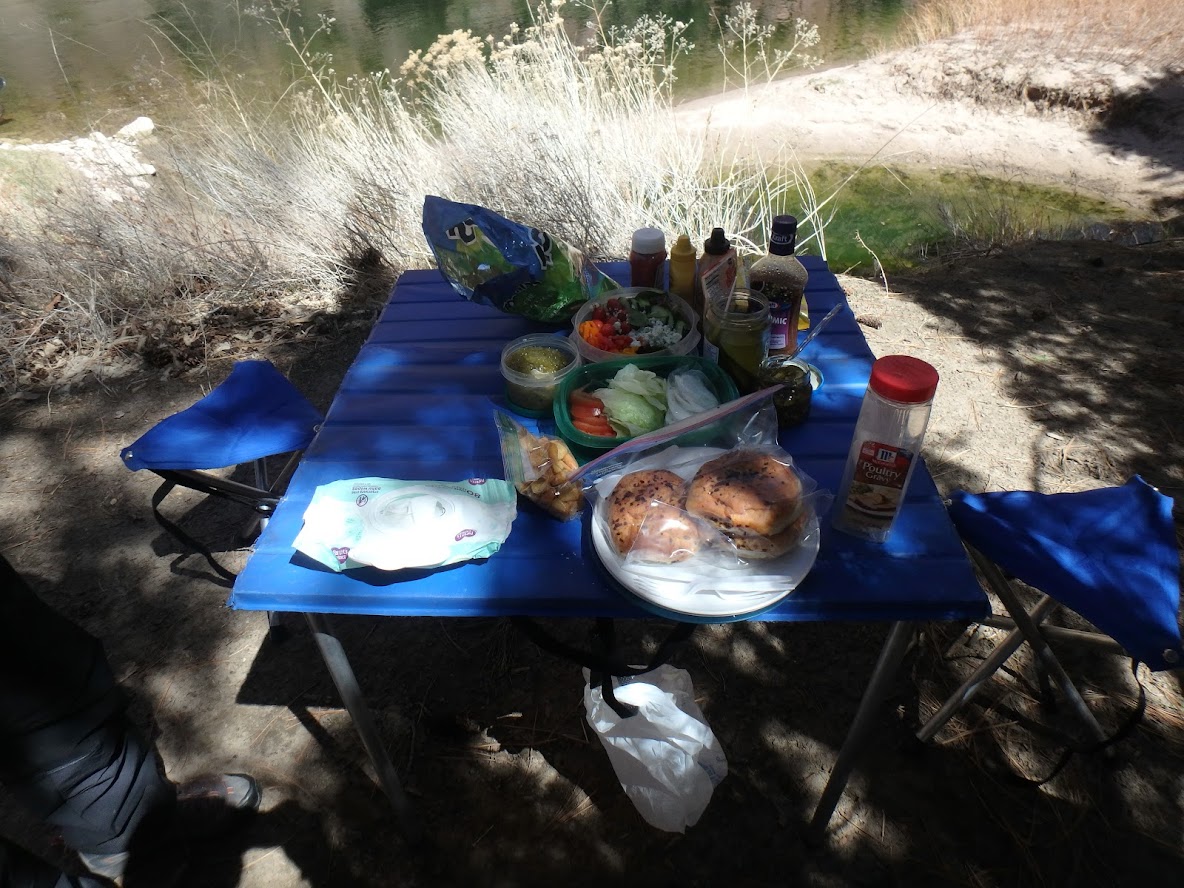 After a streamside lunch of burgers and salad, we resumed our float. By 1:30 we began to observe occasional blue winged olives, as they skittered across the river in response to the intermittent blasts of wind. Charley reconfigured our lines once again with a smaller balloon indicator and three BWO nymph imitations spaced two feet apart. He explained that this set up would cover the entire water column, as the trout reacted to active baetis nymphs. The lighter weight and smaller indicator were also more conducive to prospecting the shallow rocky riffles along the bank. 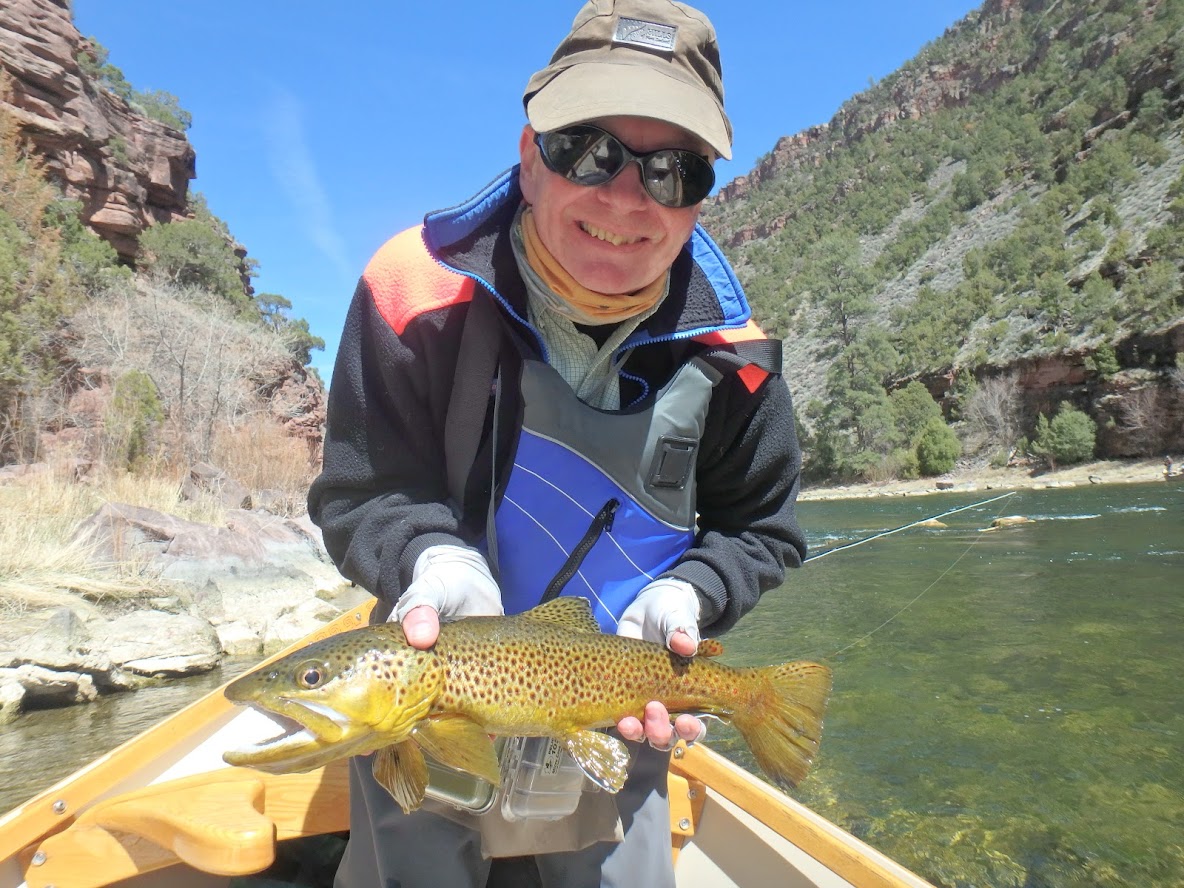 Dave G. and I switched positions, and the combination of the baetis emergence, a lighter rig, and being in the front position propelled me to improved success. From 1:30PM until 4:00PM I landed thirteen trout and one large whitefish to bring my trout total to fifteen on the day. Yes, it was a fun day on the Green River. Five rainbows occupied my net along with ten brown trout. Included in this tally was a nineteen inch brown and an eighteen inch rainbow. All the other fish, except for two small ones netted near the takeout ramp, were in excess of fourteen inches. 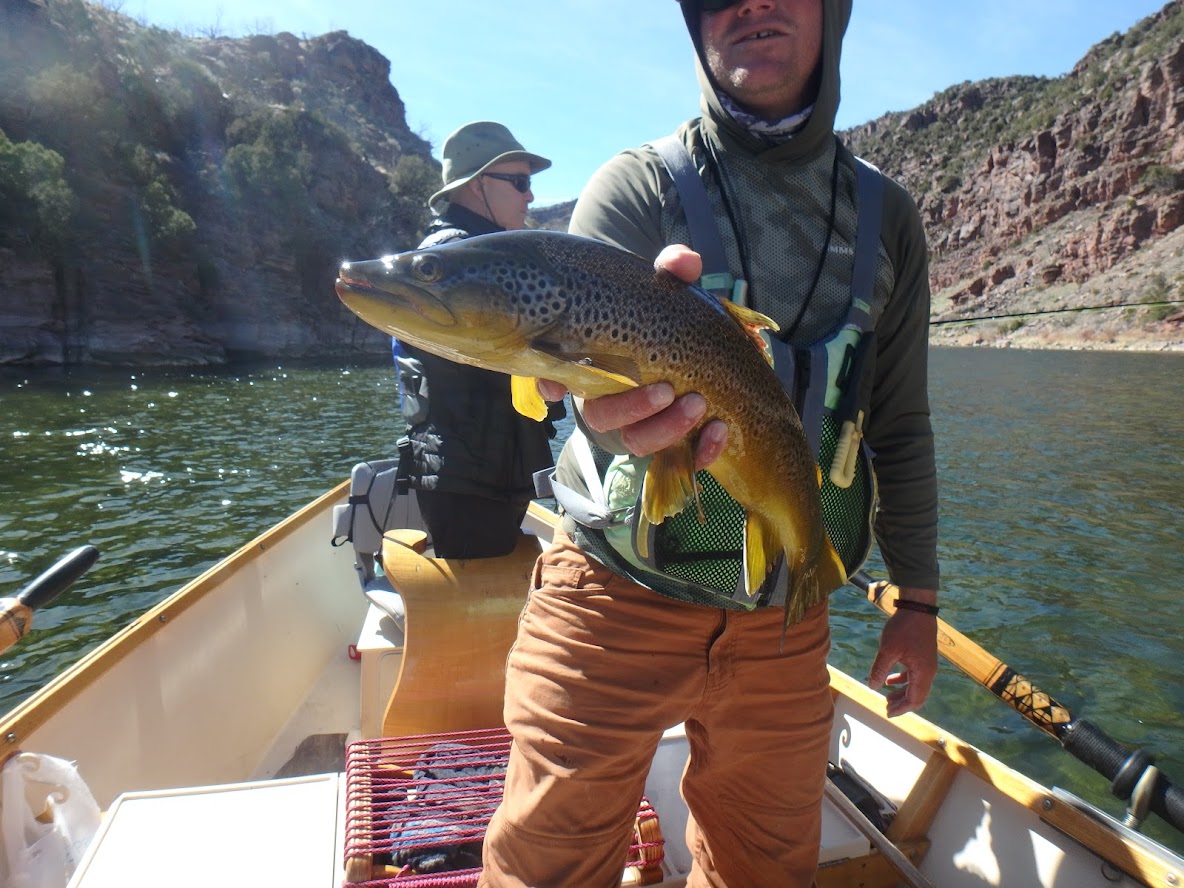 Happy With This Green River Catch

I bought into Charley’s pleas to fish the smooth slower moving slicks, and this paid off with a burst of action. Several browns materialized from fairly shallow riffles near the bank, and this conformed with Charley’s prediction. In short we had a blast. Dave G. tallied twelve on the day in addition to my fifteen. The river residents never fed on the surface, but they clearly went into feeding mode on the active nymphs. The number and quantity of fish landed on April 18 was excellent.