Location: Downstream border with public and private water between mile markers 11 and 12

Jane wanted to camp at Reudi Reservoir near the Frying Pan River in 2012, and she had not yet realized that goal. Who was I to stand in the way of such a simple request? We planned to make the trip on the weekend of September 15-16, but Jane needed to work through Friday, so I planned to drive west early and snag a campsite and do some fishing.

Originally I hoped to make the drive on Wednesday evening and be in position to fish on Thursday and Friday; however, some wet weather moved through Colorado on Tuesday evening and extended through most of Wednesday. Along with the wet weather came a trailing cold front with lows in the mountains dropping below freezing. I didn’t relish a wet cold evening, so I decided to pack everything on Wednesday, sleep in my bed in Denver, and get an early start on Thursday morning. This worked according to plan and I arrived at the Little Maud campsite by 11:30AM. It was a cool day as forecast with temperatures never rising above the high 60’s. I immediately paid for three nights for campsite 5 at Little Maud and prepared a quick lunch and then drove back down below the dam to the pullout above fallen tree pool. This is roughly .2 miles above the private water. The fishing pressure seemed uncommonly light and initially I had the entire stretch from the private water to mile marker 12 to myself.

I walked along the shoulder of the road as far as I could go before encountering the private water no trespassing sign and dropped down to the river. There was a hops vine with creamy flowers surrounding a reflector post where I entered the river so I stopped and took a couple photos in memory of my friends who were gathering the flowers to make beer during the first night of my previous visit to the Frying Pan. 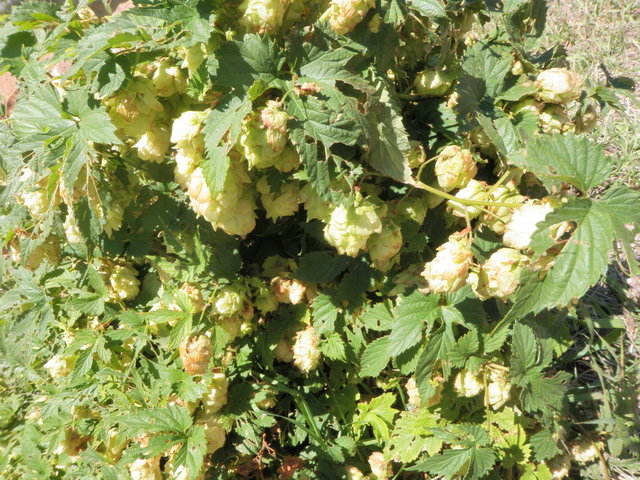 When I got in position I tied on a Chernobyl ant and beadhead hares ear as I wasn’t seeing any hatching activity at noon. I fished this combination along the bank upstream to the point of the small island just below the fallen trees and received only looks with no takes. At this point I crossed the channel closest to the road and circled below the bottom point of the small island and explored the right braid. Near the top of this channel tucked behind the island and hidden from view from the road was a nice little pool roughly 10 ft X 15 ft in size. A log extended across the top 1/3 of the pool and as I stood and observed the pool some mayflies began to emerge and fish began to rise. I could see at least five rising fish in this small pool and the mayflies appeared to be the variety with a light yellow body and light olive hued wings.

I elected to tie on one of the size 16 comparaduns I tied the previous afternoon in anticipation of this very situation. There was a fast run between me and the pool but I countered this by flicking my fly to the pool and then holding my rod tip high to keep the fly line out of the fast current. In short order I landed a medium sized brown and then a very nice chunky brown that was feasting right along the edge of the current seam. There were more fish in the pool and they continued to feed, but before I could tempt them with my fly, two fishermen arrived on the road side of fallen tree pool. The first guy began fishing along the road, but his friend arrived and was making motions like he wanted to cross and fish where I was headed, so I quickly reeled up my flies and moved to the very tail of fallen tree pool to claim the spot I was targeting to ultimately end up at when a hatch might begin. 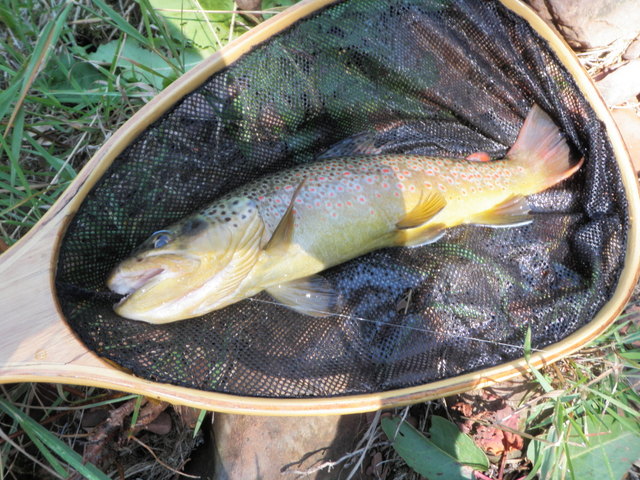 I immediately spotted rising fish at the tail just above the dead trees, but as I looked up the river I could see fish rising sporadically throughout the run and pool. I stayed with the yellow comparadun and picked up a few small to medium browns, but then I began to experience rejections. With my polarized sunglasses I could see fish move toward my fly and then turn away. This was not encouraging. I switched from the yellow comparadun to the light gray variety that I renamed the money fly. The intensity of the hatch increased and chaos broke loose between one and three o’clock. There were yellow mayflies and gray mayflies and green drakes. When I saw the green drakes I immediately tied on my Wellerfish paradrake. It wasn’t receiving any attention until I spotted a nice fish actually jump out of the water six inches and eat a natural green drake. I made a drift over this area and the same fish made a beeline for my paradrake, and I landed a beautiful deep bronze colored Colorado cutthroat trout. It was a thrill to catch this rare beauty for the Frying Pan on my newly minted Wellerfish paradrake. 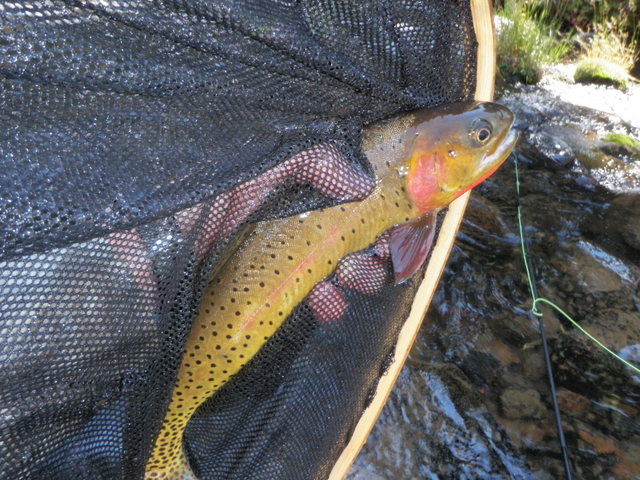 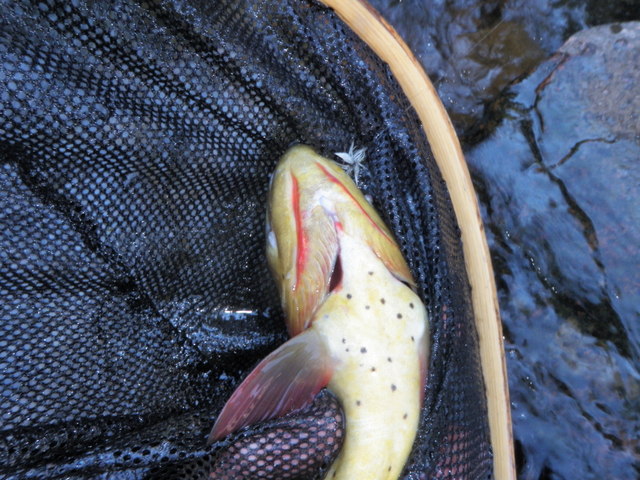 This was a highlight, but the two hours were largely frustrating as I cast over many rising fish and managed to land only five fish over the two hour time period. This may not sound too bad, but you had to see the dense hatch of different mayflies and the number of aggressively rising fish to understand. A green drake landed on my hand for a short period and it was much smaller than I remembered and also smaller than the Wellerfish paradrakes that I tied. I had a couple size 14 versions that I tied in a previous year, and I tried one of these for awhile and landed one brown, but it definitely wasn’t producing in a desired manner.

By 3PM the hatch had subsided a bit, and I decided to relinquish my hard earned spot at fallen tree pool although one of the other fishermen along the road had moved on. I decided to return to the 10 X 15 pool for unfinished business. After realizing mixed results with the green drake, I exchanged it for the money fly so that’s what I began offering in the 10 X 15 foot pool. The hatch wasn’t as intense as between 1 and 3, but PMD’s were still floating up from the river at a decent rate. Quite a few fish continued to feed in a slow methodical manner in the small slow moving pool. Much to my amazement I landed 4-5 fish from this small area as the cold water residents rose and sipped in the money fly with confidence. One of my catches was another chunky 15″ brown. 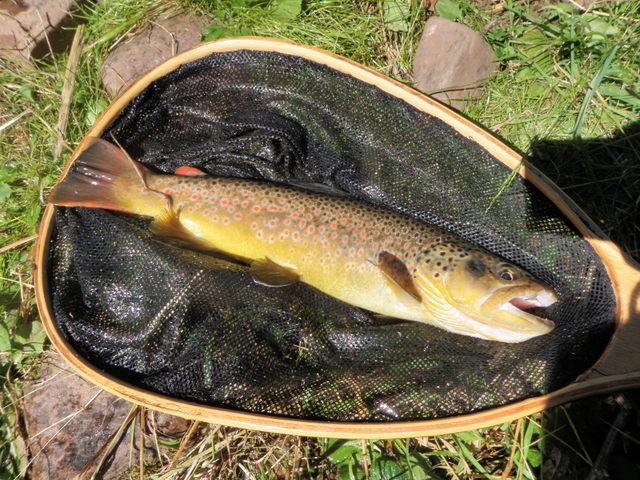 Deep Coloration on This Brown

After fishing out my hidden pool I realized that the supply of gray comparaduns (money fly) in my frontpack foam patch were pretty mangled so I returned to the car to replenish with new money flies that I tied the past winter. I transferred three or four to the trash/refurbishment cannister and replaced with four fresh new comparaduns. I put on my fleece as it was a cool day and I planned to continue fishing into the early evening as the shadows lengthened across the river. Armed with new flies and extra warmth I stood on the shoulder of the road and gazed at bush rock riffle below me. I couldn’t spot any fish as had been possible on my last trip, but I moved into position below the end of the riffle and fanned some short prospecting casts of the money fly across the riffle and landed two medium fish, one rainbow and one brown.

I considered moving across the river to the triangular area where I’d experienced frustration and then success on my previous trip, but that part of the stream was covered in shadows and the slightly higher flows suggested a more challenging wade two-thirds across the river, so I opted to walk further up the road to the two channels around a narrow small island. I expected the left channel to remain in the sun, and in fact this was the case when I arrived at the bottom of the shallow smooth stream section. I observed several rises in the smooth water, but could only entice one small brown to my money fly. I slowly moved up the left channel prospecting likely holding lies with no success until I eventually reached the top of the island. 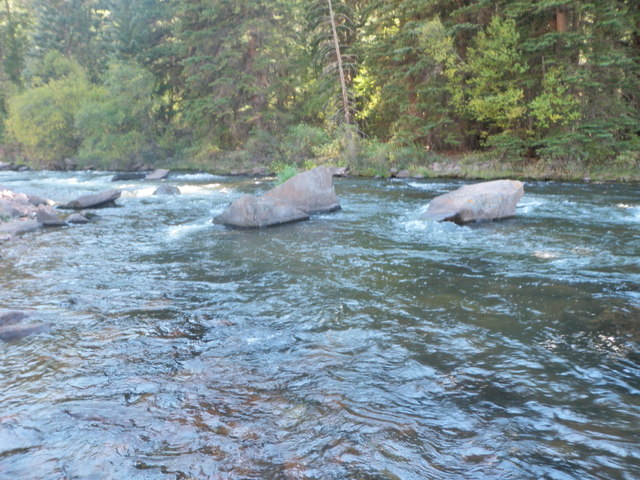 Rainbow Was in This Area

I could spot a rainbow flashing occasionally to feed in the area below where two currents merged to create a short run in front of a large rock. I worked my fly over this fish and also higher up in the pocket between the merging currents. On one of these drifts I lost sight of my fly and lifted to locate it, and I felt the weight of a nice 14″ rainbow. The small comparadun got submerged in the swirling current where the flows met, and the rainbow sucked in my dry fly as a wet fly! 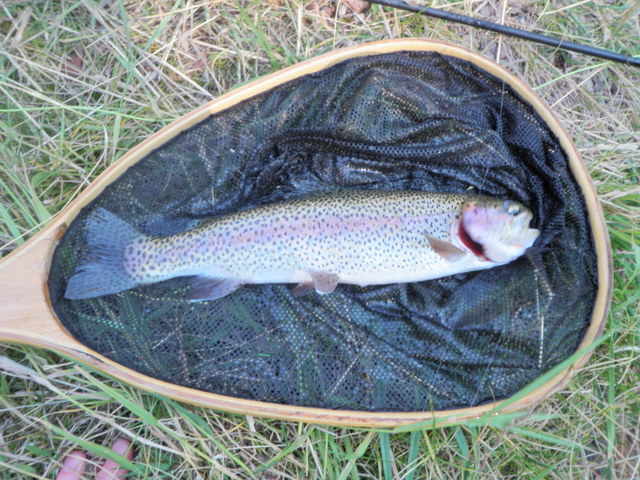 Rainbow Taken at Top of Island

Next I decided to return to the bottom of the island and explore the right channel, and I was most interested in checking out the large rectangular rock pool at the top. However as I crossed the bottom of the slow smooth left channel again, I noticed several fish rising. For some reason I felt more confident in my fly and decided to give this another chance. It was a good decision as I landed two nice rainbows and one 12 inch brown with one of the rainbows taking the money fly after it sank. This may point toward using a light gray body wet fly in future situations such as this. Ironically I read an article in Fly Fisherman a couple days later that suggested that close to 75% of flies eaten during a hatch are cripples and emergers. 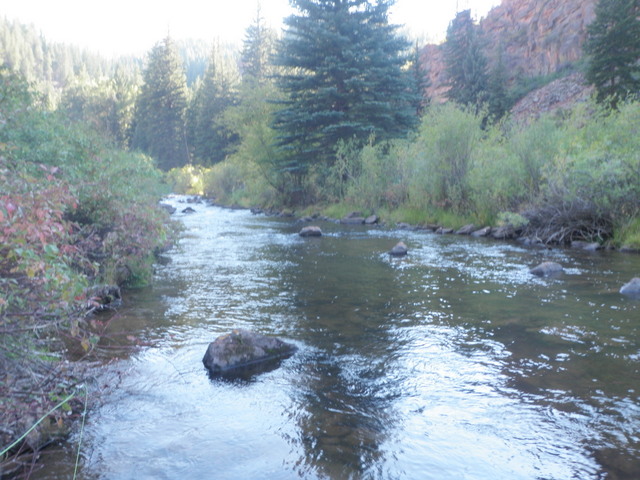 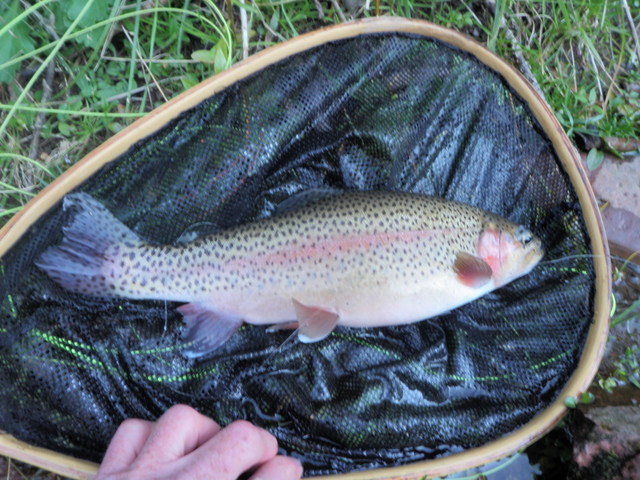 By now I had landed 19 trout on this cool chilly Thursday and it was getting late in the day and I was tempted to hook my fly to the rod guide and return to the car to warm my feet. But I also felt this ridiculous desire to reach 20 trout, so I circled back to the bottom of the island, and this time fulfilled my intent and moved to the right channel and waded along the island side to large rectangular rock pool at the head. I made a prospecting cast near the tail of the pool and five feet away from the left bank and nailed a small brown to reach 20. I wasn’t quite satisfied with using a nine inch fish for number twenty so I shot a couple casts to the top of the run below and next to a large boulder on the left side and landed another brown of 10-11 inches in length. 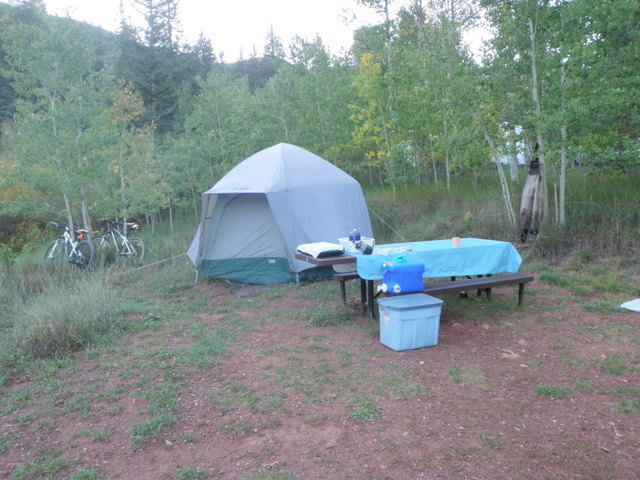 No. 5, Little Maud at Reudi Reservoir

At this point I called it a day and returned to the car and eventually to my campsite where I put up the tent and prepared dinner. It turned out to be a another great day on the Frying Pan River, although I was frustrated by the 1 – 3PM period. Clearly I didn’t have the answer as evidenced by my sporadic success and usage of multiple flies with numerous refusals. On the other hand I demonstrated that persistence, stealth and pursuit of less obvious locations can yield great returns.