After a rewarding day on Sunday, I had two more nights reserved at the Comfort Inn in Carbondale, and I planned to leverage the accommodations into two more days on the Frying Pan River tailwater. The freestones in the area were out of play due to high and turbid run off conditions. Unfortunately, the weather was not cooperating with my plans; as rain, snow and cold temperatures rolled into the Roaring Fork Valley on Sunday evening. I reviewed my Weather Underground forecast for Basalt, CO, and I noted that the rain was expected to clear on Monday morning, so I decided to hang out in my room and read, until the pavement dried. I researched pickleball in Carbondale and determined that drop-in play was available from 7AM until noon. Prior to the weather deterioration, I gave thought to playing pickleball in the morning before migrating to the Frying Pan for the afternoon. With the change in weather I decided to dress in my pickleball attire and check out the courts and play for an hour or two and then proceed directly to the Frying Pan for some afternoon fishing.

The first part of this plan evolved nicely. I arrived at the courts, and two players sat on the bench waiting for more to arrive. They welcomed me, and within ten minutes a fourth joined us. For the next three and one-half hours I enjoyed myself immensely playing against new and skilled opposition in Carbondale, CO. As the games progressed, the weather worsened, and the wind was an ever-present hindrance to controlling the light pickleball. A heavy layer of clouds shrouded the peak of Mt. Sopris, which was constantly within my view from the courts, and I decided to forego fly fishing for the active game of pickleball on Memorial Day.

Tuesday was my getaway day, and after bypassing fly fishing on Memorial Day I was anxious to pay another visit to the Pan, before embarking on my return drive to Denver. Once again cold temperatures were forecast for the morning, so I enjoyed the warmth of my room, before I checked out at 10:15. The short drive south on CO 82 and then through Basalt delivered me to a roadside pullout along the lower Frying Pan by 10:45AM, and I was perched along the river fly fishing by 11:15. I chose my Sage four weight and rigged it with an amber ice dub chubby Chernobyl, salvation nymph and sparkle wing RS2. These were the flies that produced solid results on Sunday, so why not default to them again on Tuesday? 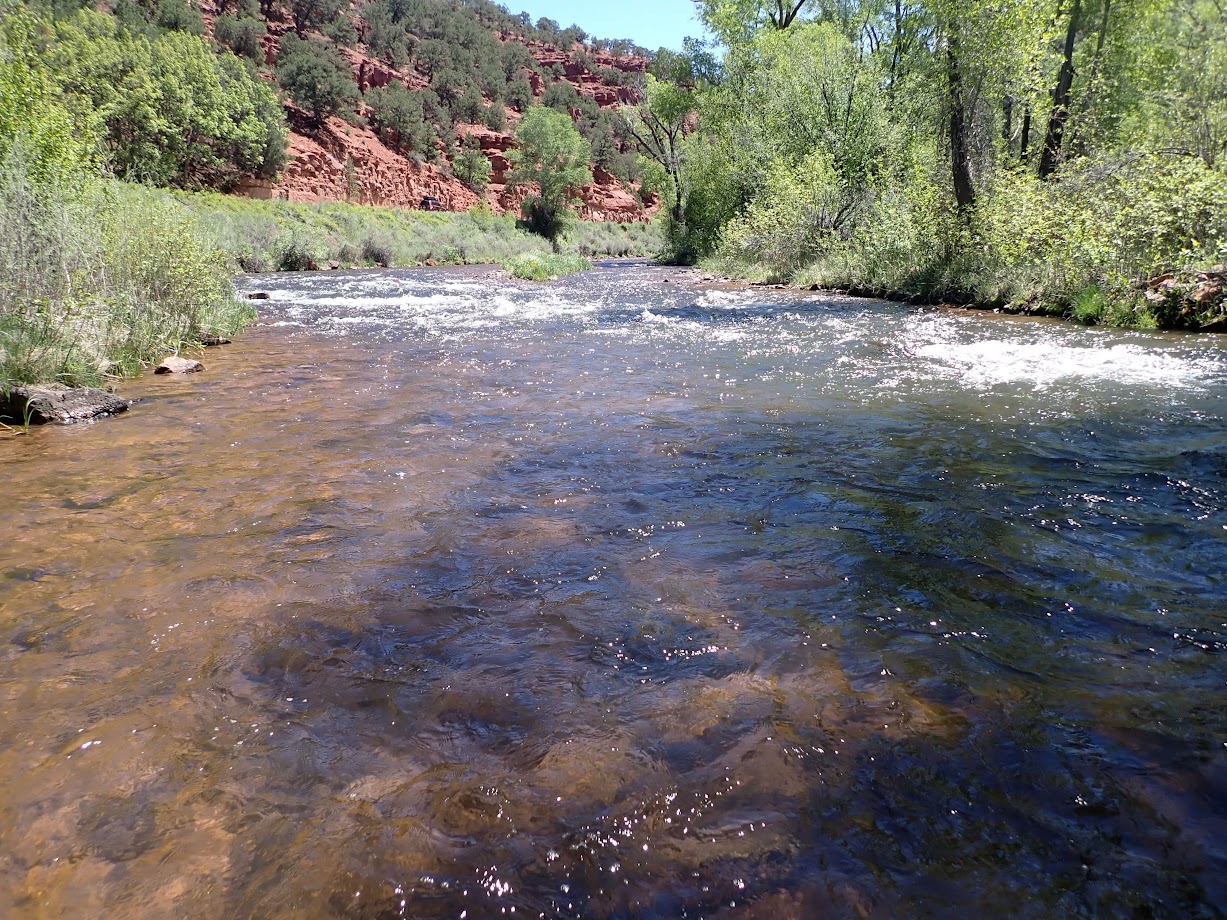 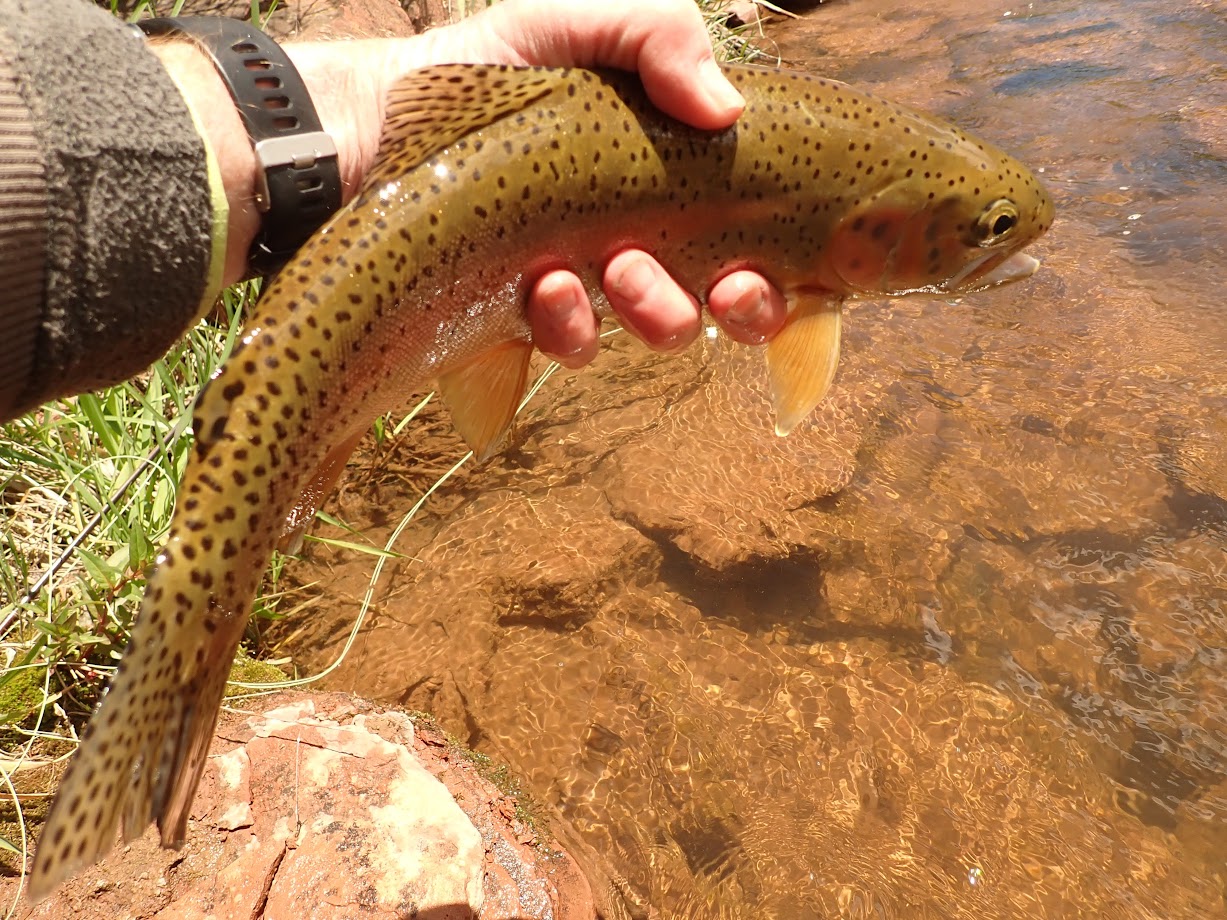 Happy with This Landed Trout

I worked my way upstream over the next two hours and landed four trout. An eleven inch brown chowed down on the salvation in the early going, and then after a long dry spell I landed two browns barely over six inches plus the fish of the day, a deeply colored cutbow that smacked the amber ice dub body chubby Chernobyl. My results on the lower river were better than what I achieved on Sunday in the early going; however, I was disappointed, and I decided to once again move to the upper section. I packed my car with my gear and made the drive to the river area between MM10 and 11. 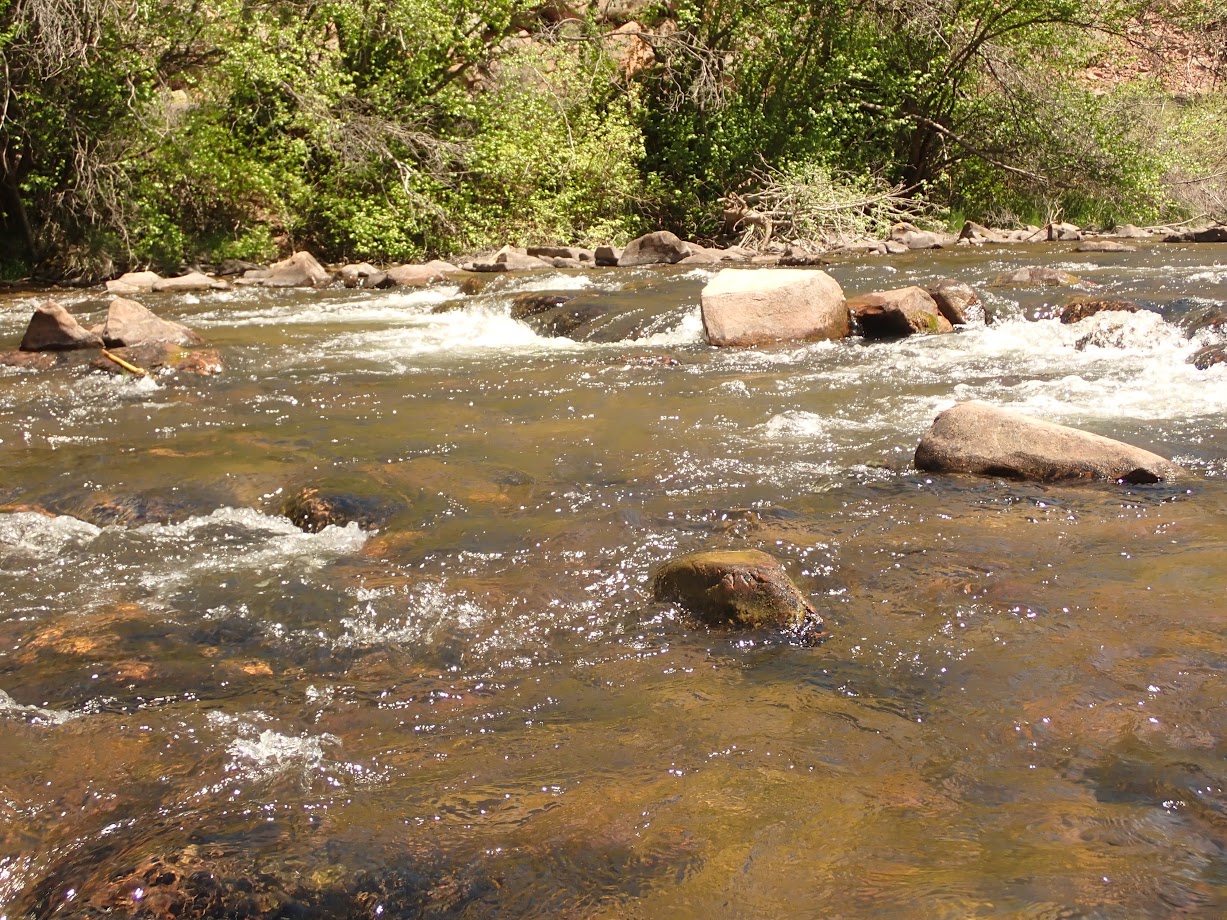 I spent the remainder of the day probing the pockets and deep runs upstream from where I ended my day on Sunday. Throughout this time I maintained the chubby Chernobyl and salvation nymph, but the third fly cycled among an ultra zug bug, hares ear nymph, a classic RS2 and the sparkle wing RS2. The fish counter elevated from four to twelve, and the salvation was responsible for all these trout except for one aggressive brown that chomped the chubby Chernobyl. The eight later afternoon fish included one nice rainbow plus seven brown trout. Several of the browns were in the twelve inch range, but most of the netted fish fit in the eight to eleven inch slot. 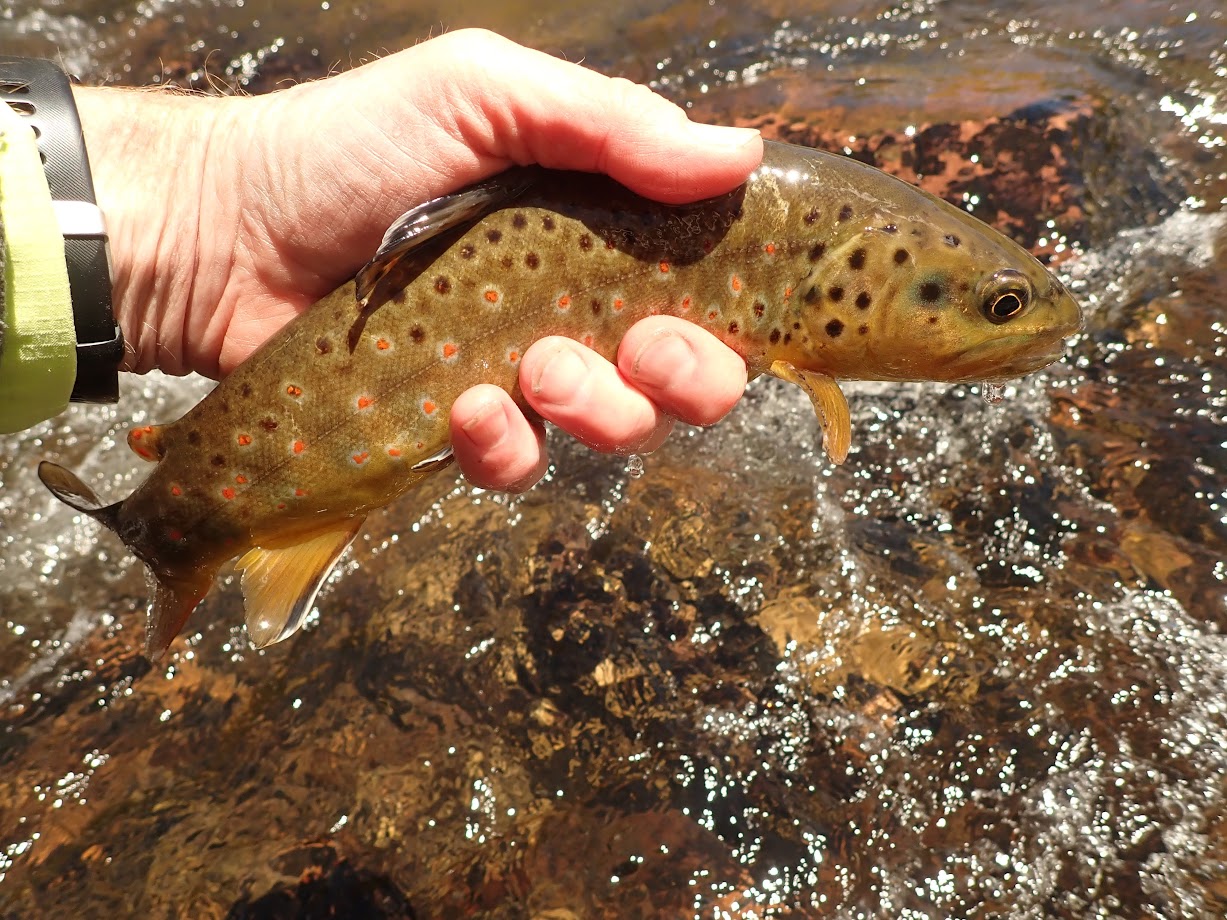 I lost six flies during my Tuesday wanderings, and all were due to human error. I actually dropped five of the flies in the river, when I failed to realize that the leader broke, while I rescued them from streamside shrubs. I was quite disturbed about this turn of events. The final demonstration of human blunder occurred at 3:30PM, and this provided a convenient excuse to end my day.

Tuesday was a mediocre day in my opinion. The weather was pleasant, but the fishing was relatively slow, and the average size of my catch was below my expectations for the Frying Pan River. However, with most options blown out across the state, I felt fortunate for the opportunity to cast in moving water on May 31, 2022. With my daughter, Amy, now living in the Roaring Fork Valley, I foresee more visits during the 2022 fishing season.