True to my vow to fish backcountry trout streams until the air temperatures dropped to more favorable levels, I visited the Elk River in Routt National Forest on August 9, 2022. Jane and I reserved a campground in the area, and I was perfectly positioned for a day of fly fishing. With the high temperature expected to touch the eighty degree mark, and the flows at seasonal lows, I decided to launch my fly fishing adventure early. This commitment to morning fishing placed me on the stream by 9:30AM.

I rigged my Orvis Access four weight and tied a size 14 purple haze to my line and began tossing the attractor dry fly to every likely fish holding spot. The haze yielded one eight inch cutthroat in the early going, but then I covered a decent amount of stream in the next fifteen minutes with no additional interest from the assumed resident fish. I plotted a change of course, and I knotted a peacock body hippie stomper to my line and then added a beadhead hares ear on a 2.5 foot dropper. 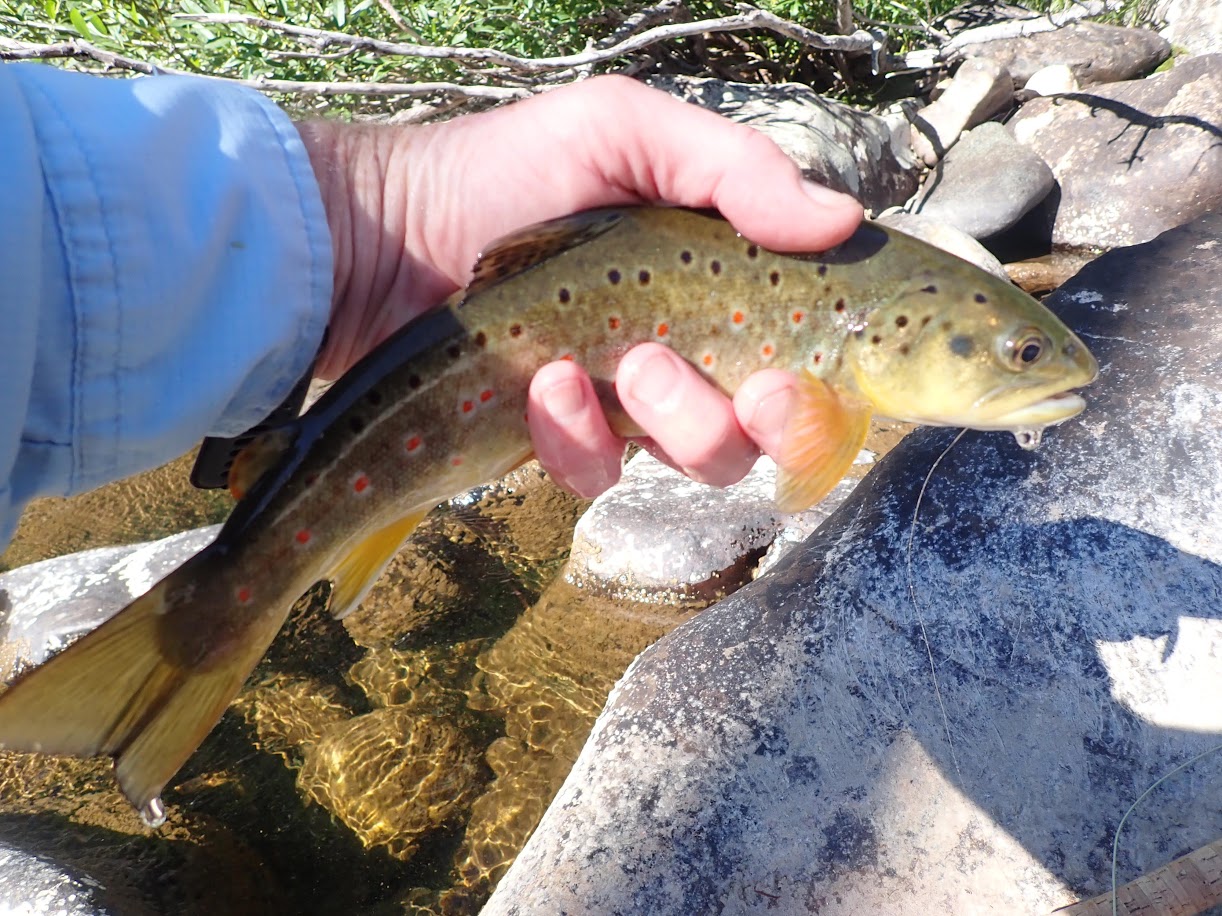 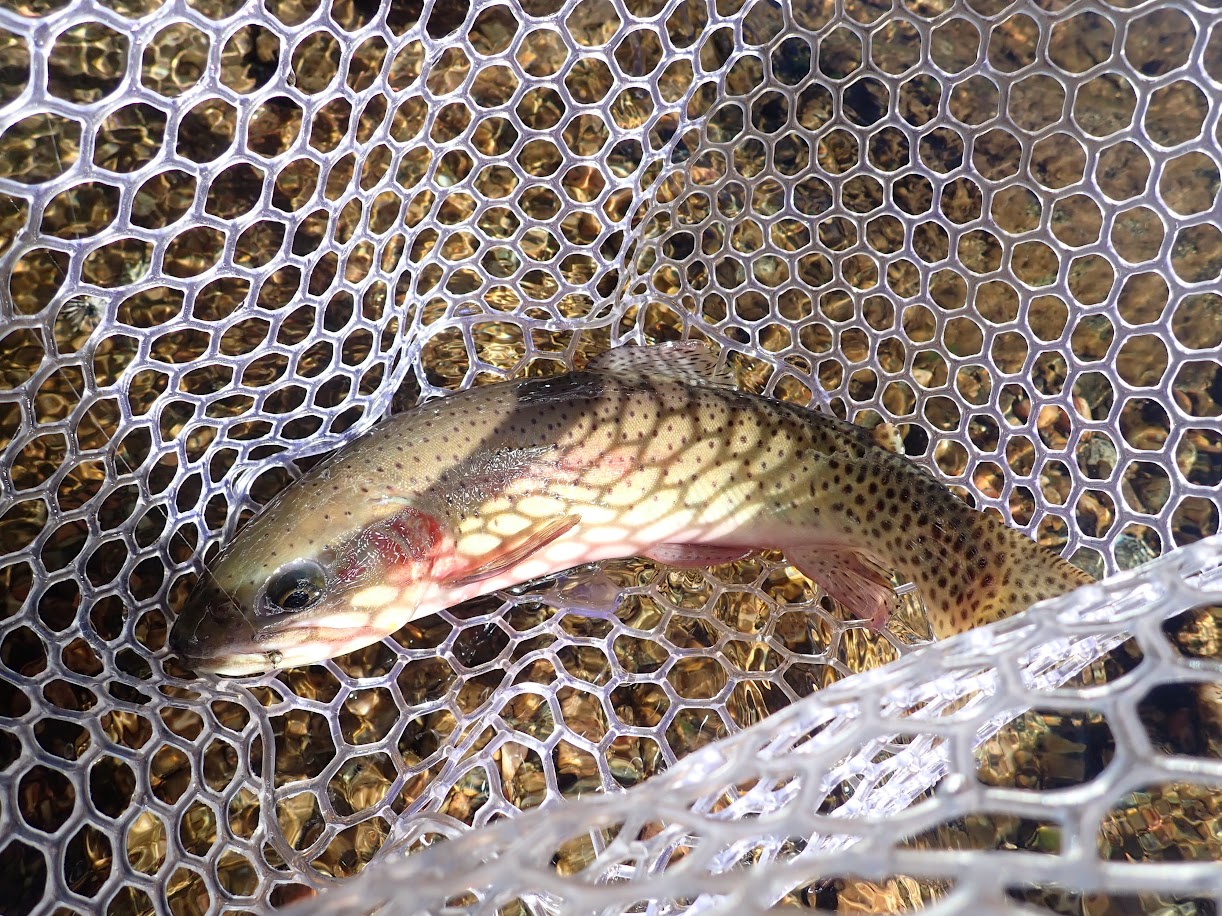 Success. The dry/dropper approach began to click, and I built the fish count to ten, before I broke for lunch at 11:45AM. The morning fish tally included brown trout and cutthroat trout. I expected cutthroats, and I was more than pleased to land some gorgeous wild trout, but the brown trout were a bit of a surprise. During my last visit to the Elk River, I landed a handful of browns, but they were all quite small and barely exceeded my six inch cut off for counting. One of the browns that thrashed in my net on August 9 was a splendid fifteen inch specimen, and several browns in the twelve and thirteen inch range joined the mix. The hares ear nymph accounted for the bulk of the trout, with a couple crushing the hippie stomper as well. Needless to say, I was thrilled with my results during the morning session. 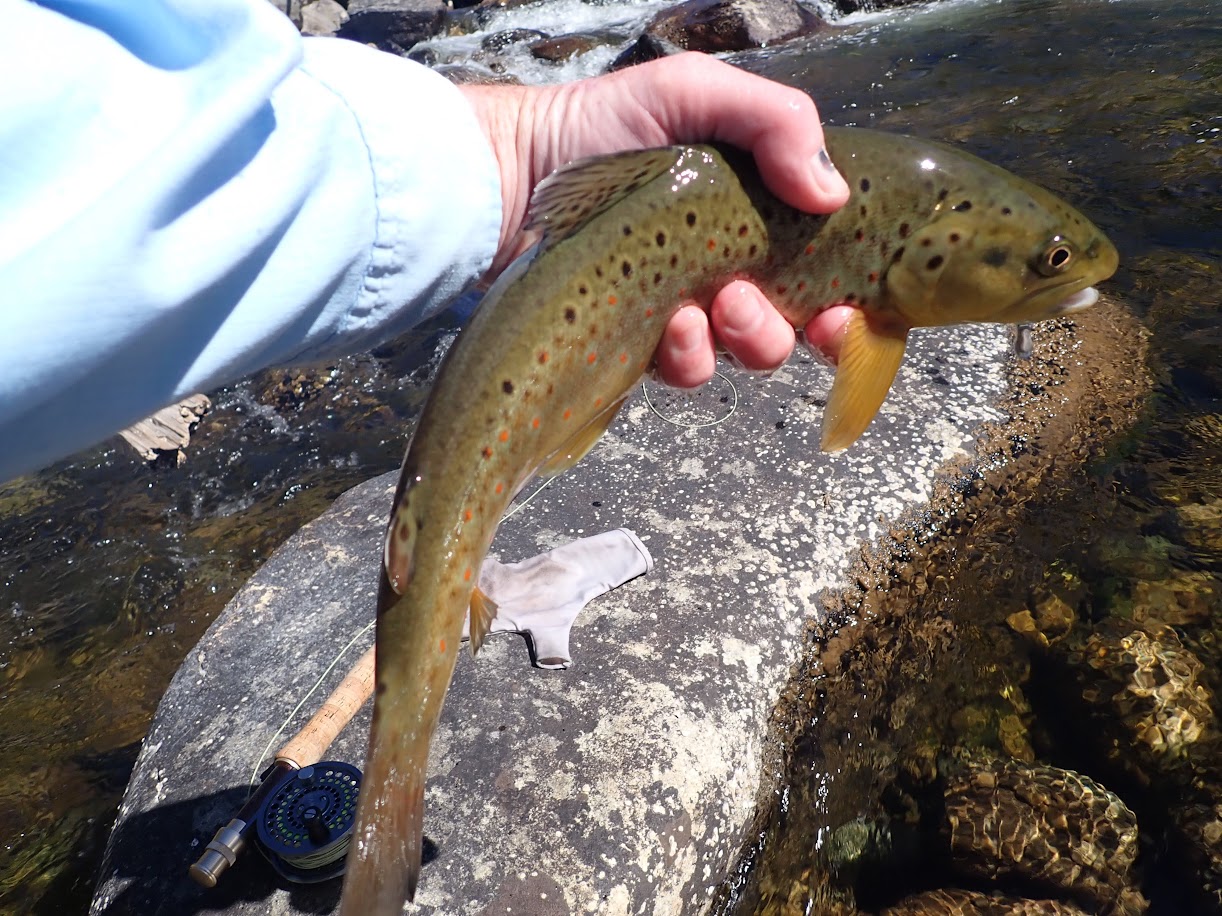 Monster for This Body of Water 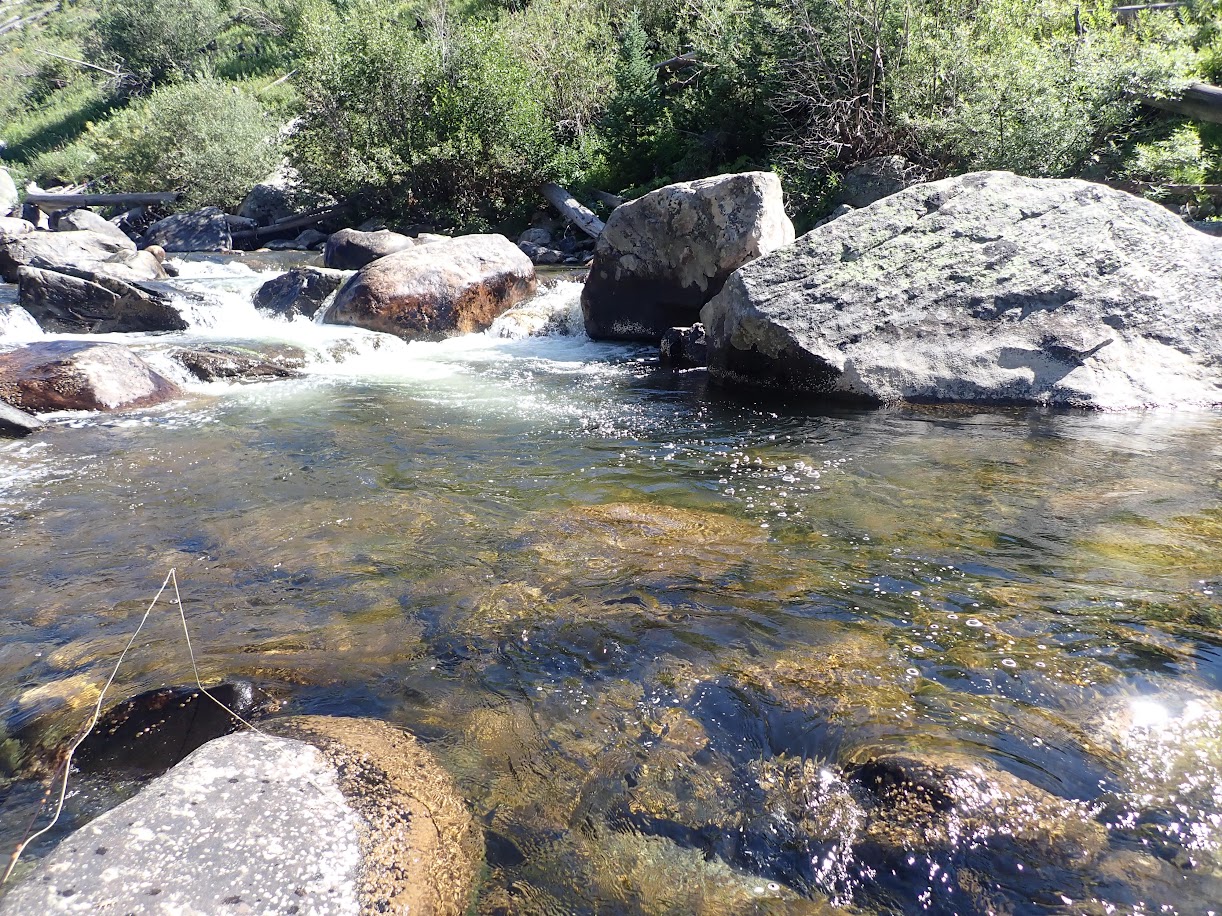 After lunch I pulled out my stream thermometer and submerged it in a deep run for two minutes. When I extracted it, I was pleased to note that it registered 58 degrees, so I continued my upstream progression. I concluded that it was safe to fish for another couple hours, and that is exactly what I did. I remained with the stomper/dropper combination, and it continued to perform well in the early going. Once again the hares ear was the main fish taker, but the ratio shifted a bit toward the surface fly, and as was the case in the morning, nice cutthroat trout in the eleven to thirteen inch range dominated the net. In nearly every prime pool with significant depth, I could rely on a colorful cutty to rise and slowly engulf the hippie stomper, or in some cases nab the hares ear near the tail of the pool. 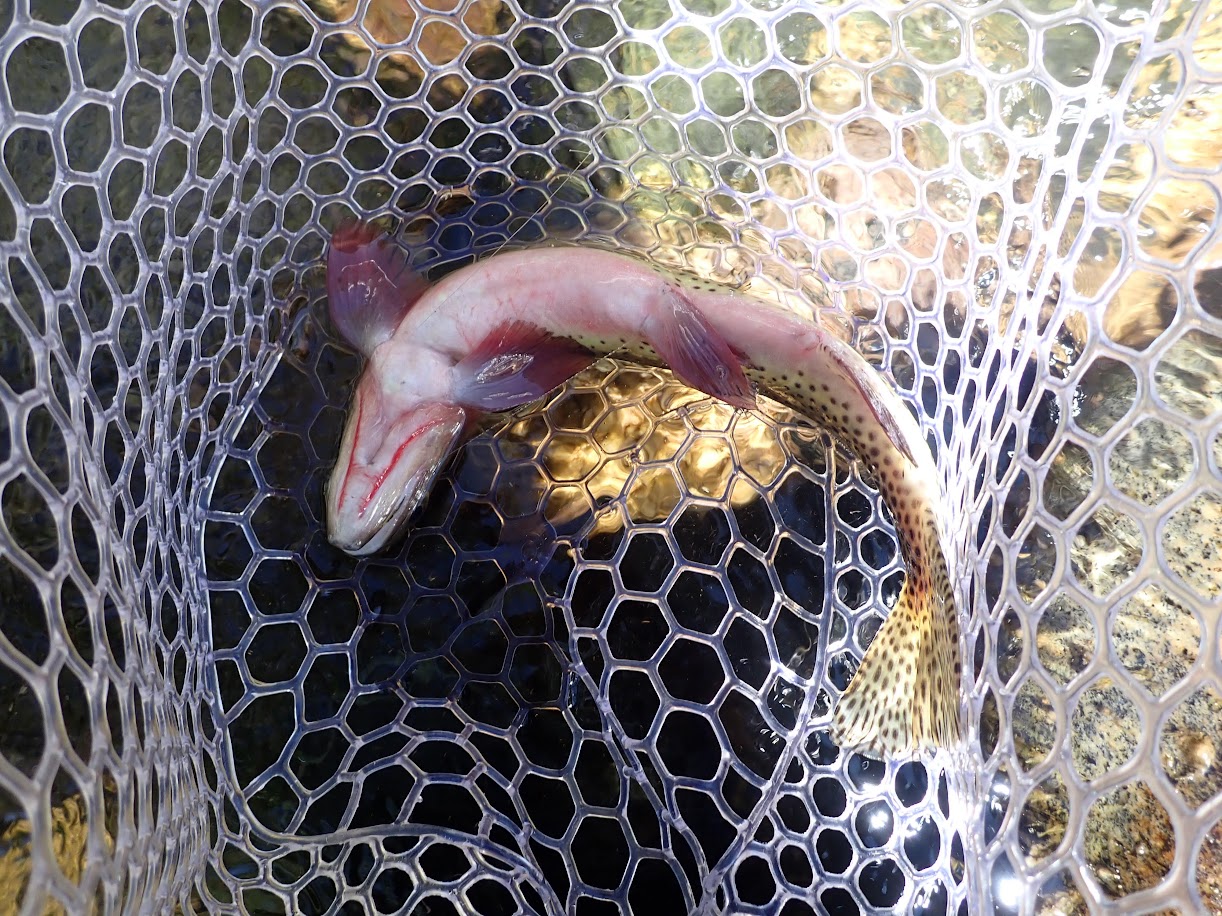 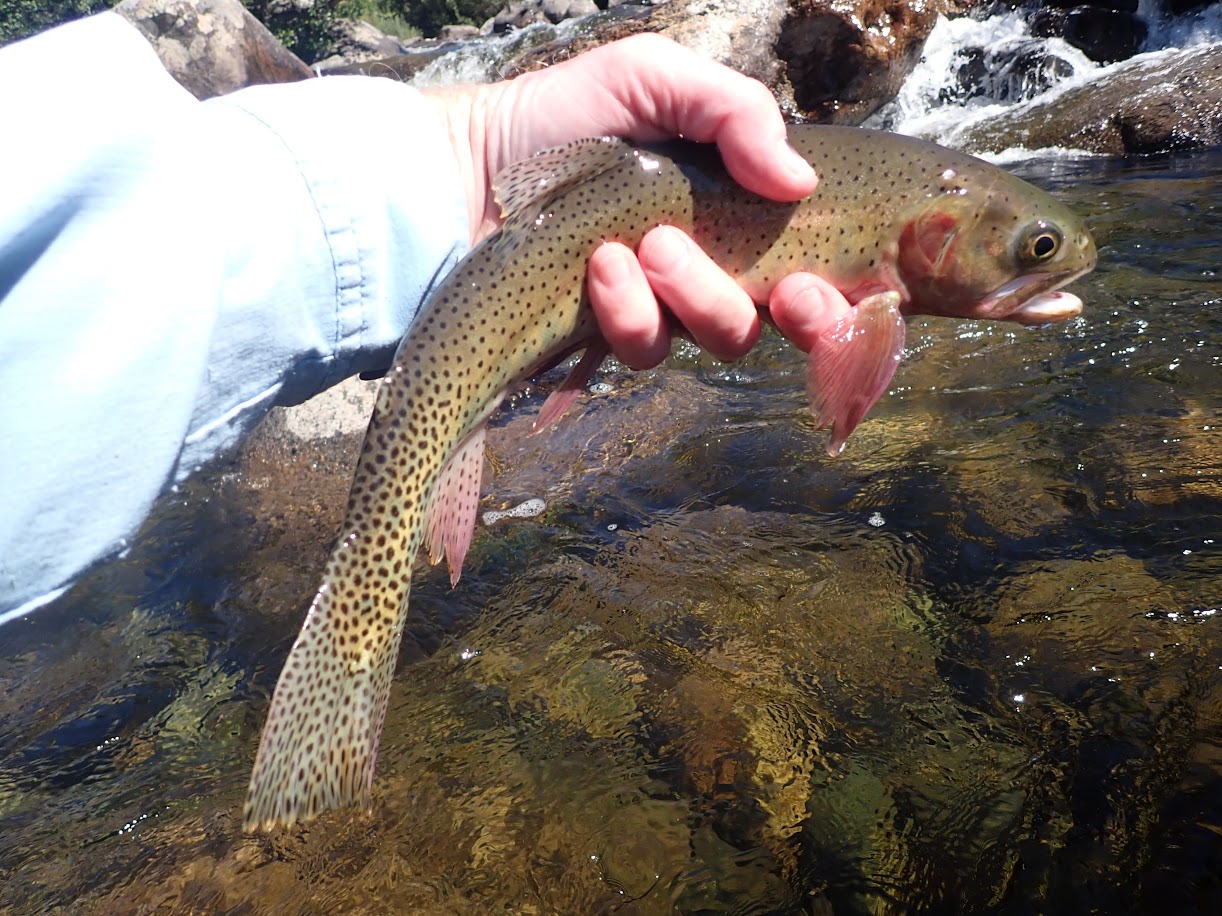 After an hour or so of this enjoyment, I landed a few brook trout. The hares ear’s effectiveness waned, and the hippie stomper was refused. This pattern indicated to me that the trout were switching to surface feeding, so I shifted to a double dry approach. I stuck with the hippie stomper as the front fly and trailed a size 16 light gray deer hair caddis. The stomper continued to demonstrate its effectiveness, albeit with a fair number of refusals, but the caddis was ignored. Once again I assessed the offerings, and this time I replaced the caddis with a size 14 yellow stimulator. Surely the yellow sally that is so pervasive in Colorado was a food source on this stream. 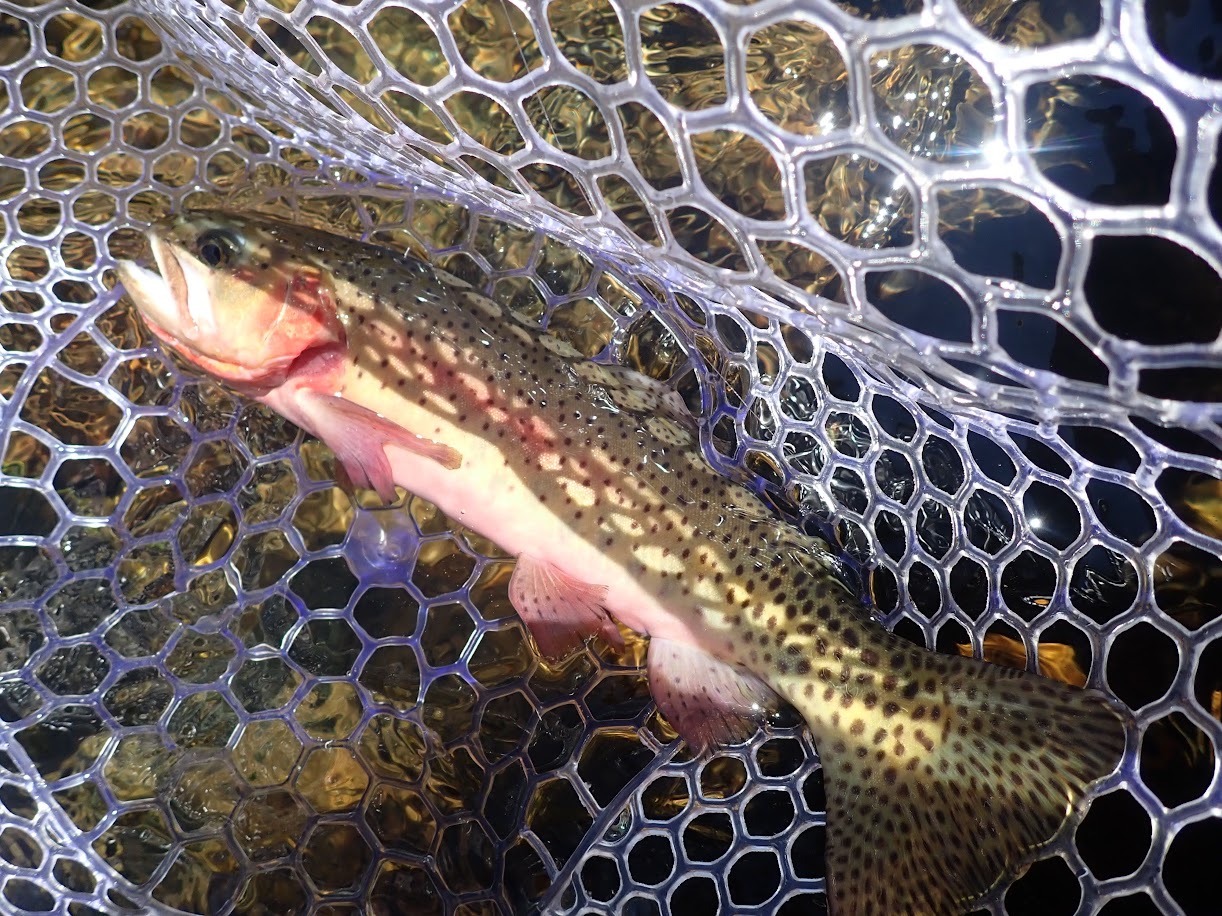 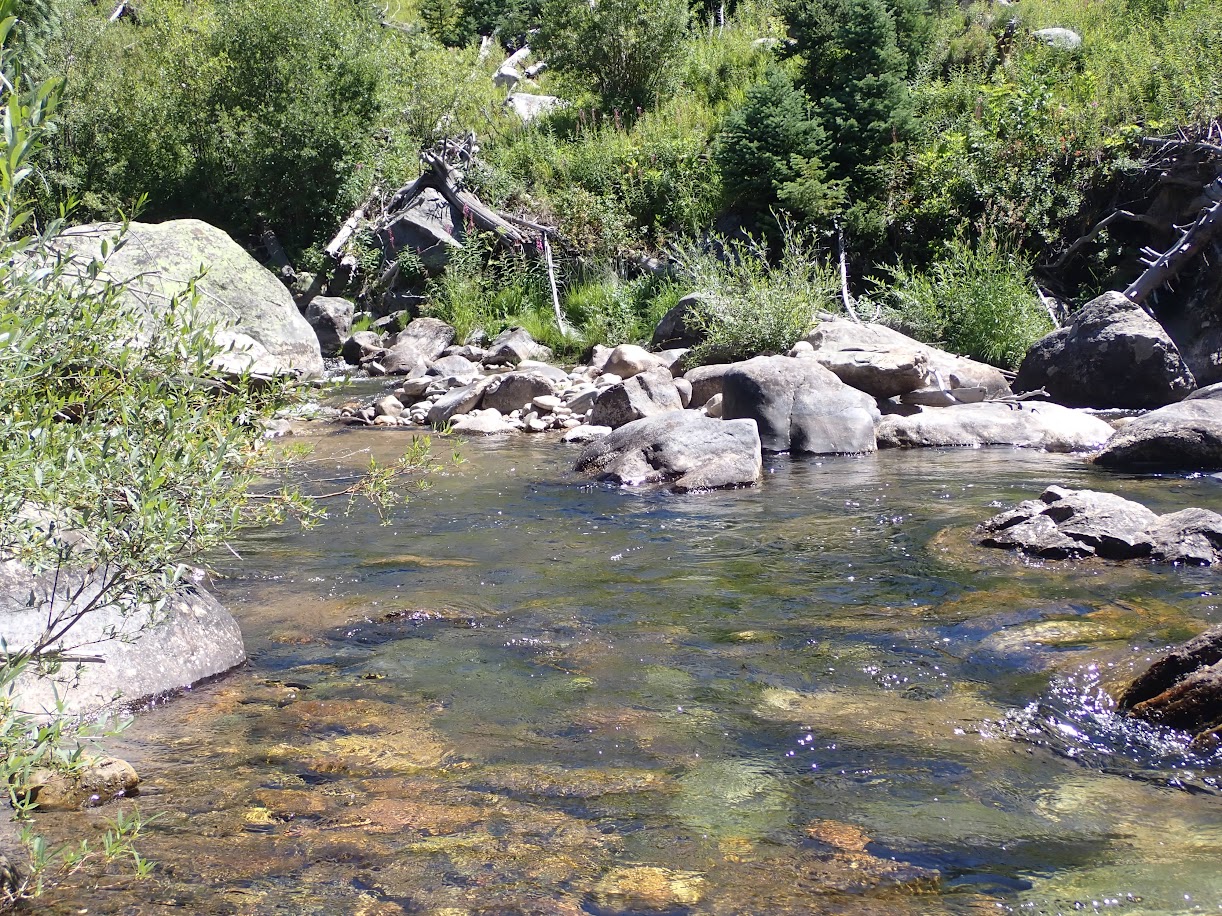 The double dry clicked for awhile, and I elevated the fish count to twenty-five, before I quit at 2:30PM. The action on the double dry was fair, but not as effective as the dry/dropper earlier in the day. Some of this may have resulted from the warmer air temperatures, and some may be attributable to fewer quality pools. The success rate between the hippie stomper and stimulator was roughly equal. 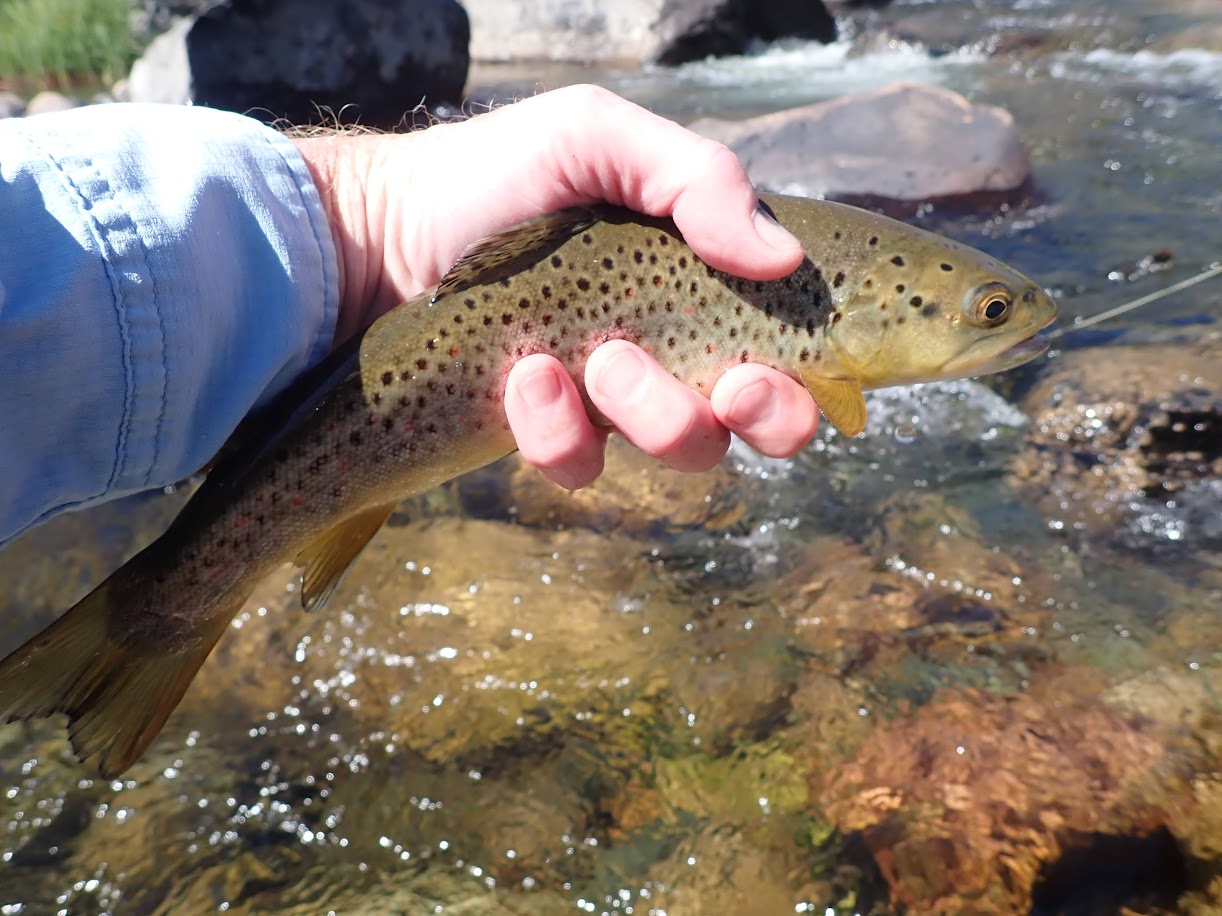 At 2:30PM I reached a convenient exit point, the catch rate slowed to a snail’s pace, and I was concerned about dangerous water temperatures; so I called it quits and returned to the trailhead. What a rewarding day on the Elk River. I landed twenty-five trout including magnificent and brightly colored cutthroats and aggressive brown trout. The fish count also included four brook trout, and one of them was a small stream monster in the twelve to thirteen inch range. Hopefully I will have an opportunity to return to the Elk River again next year. 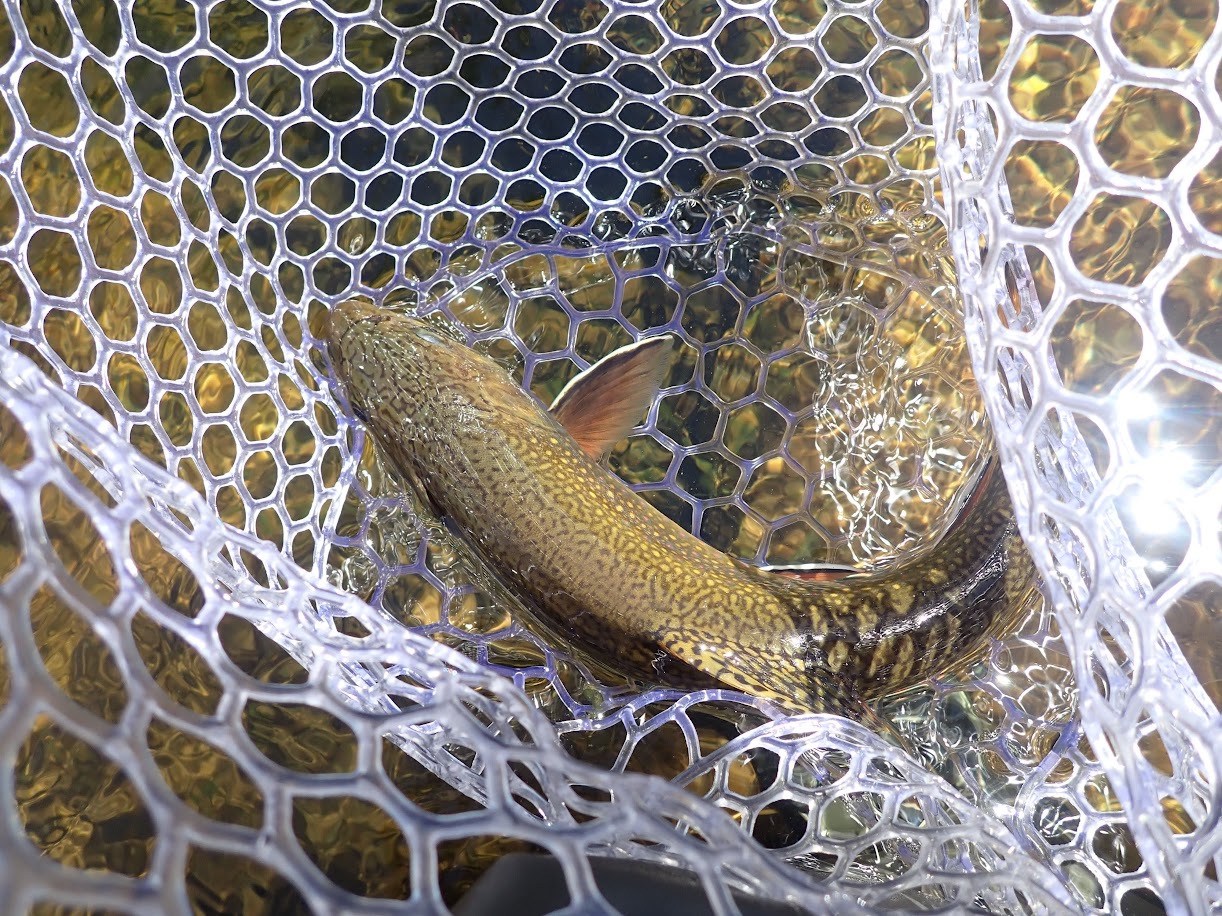 Beast of a Brook Trout a Big Surprise 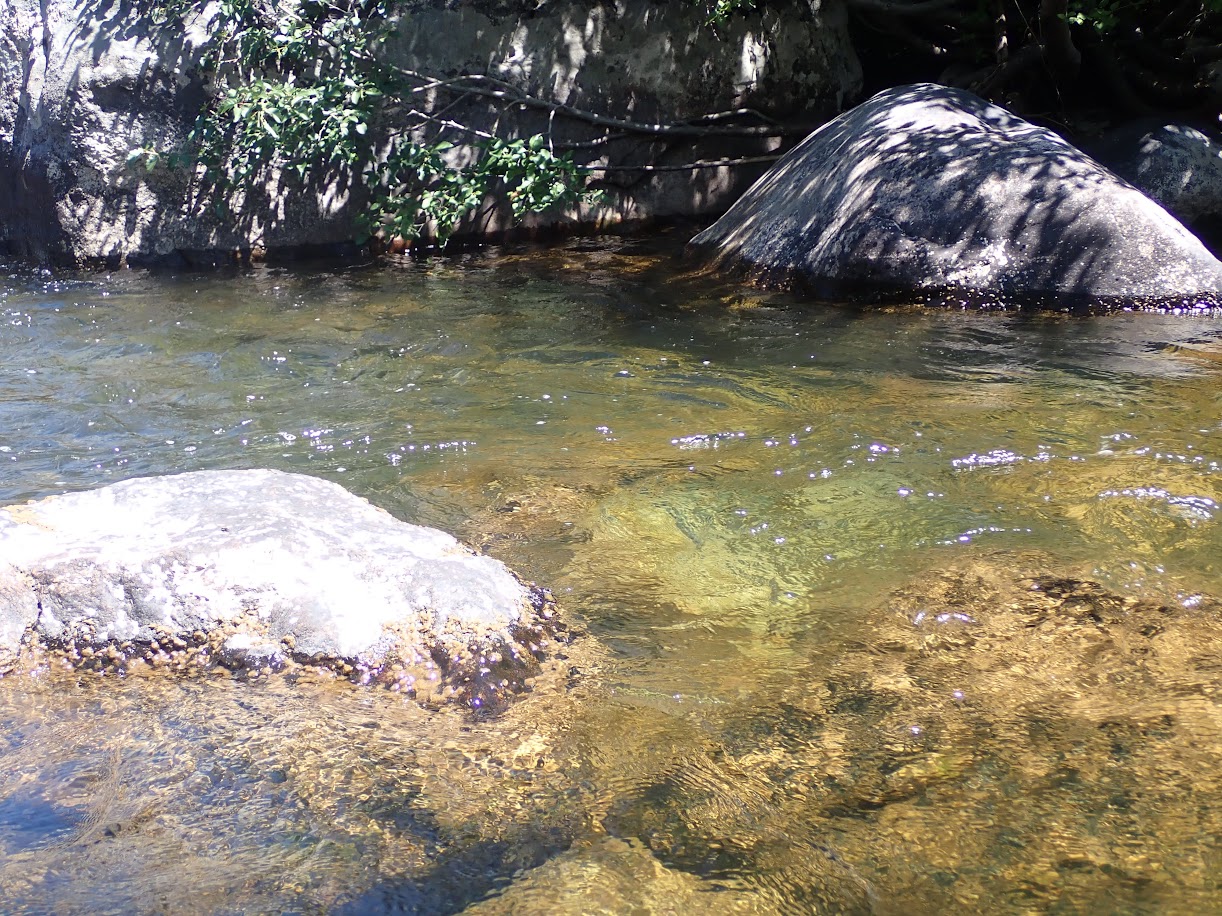 Brook Trout Was in Front of the Boulder Along the Bank