After completing a hike with my daughter, Amy, along this creek, I was apprehensive about my day of fishing on Friday, September 2, 2022. Although the stream corridor was stunning in beauty, the relatively low and extremely clear flows suggested that stealth and caution would be required to connect with a few fish. In fact, during our hike along the creek, I was unable to observe a single fish in spite of extreme clarity.

The temperature was in the mid-sixties, as I began my hike, and the bright sun and clear skies caused the air temperature to peak around eighty degrees by the time I quit at 3:30PM, but the water temperature remained ice cold from its source at high elevation. When I arrived at my chosen starting point, I knotted a tan pool toy hopper to my line and then added a salvation nymph and a black sunk ant. I was concerned that the three fly dry/dropper might create too much impact and spook the skittish residents, but I was certain that the trout were hiding in the faster and deeper oxygenated runs, and I needed a buoyant top fly to support the two subsurface offerings. 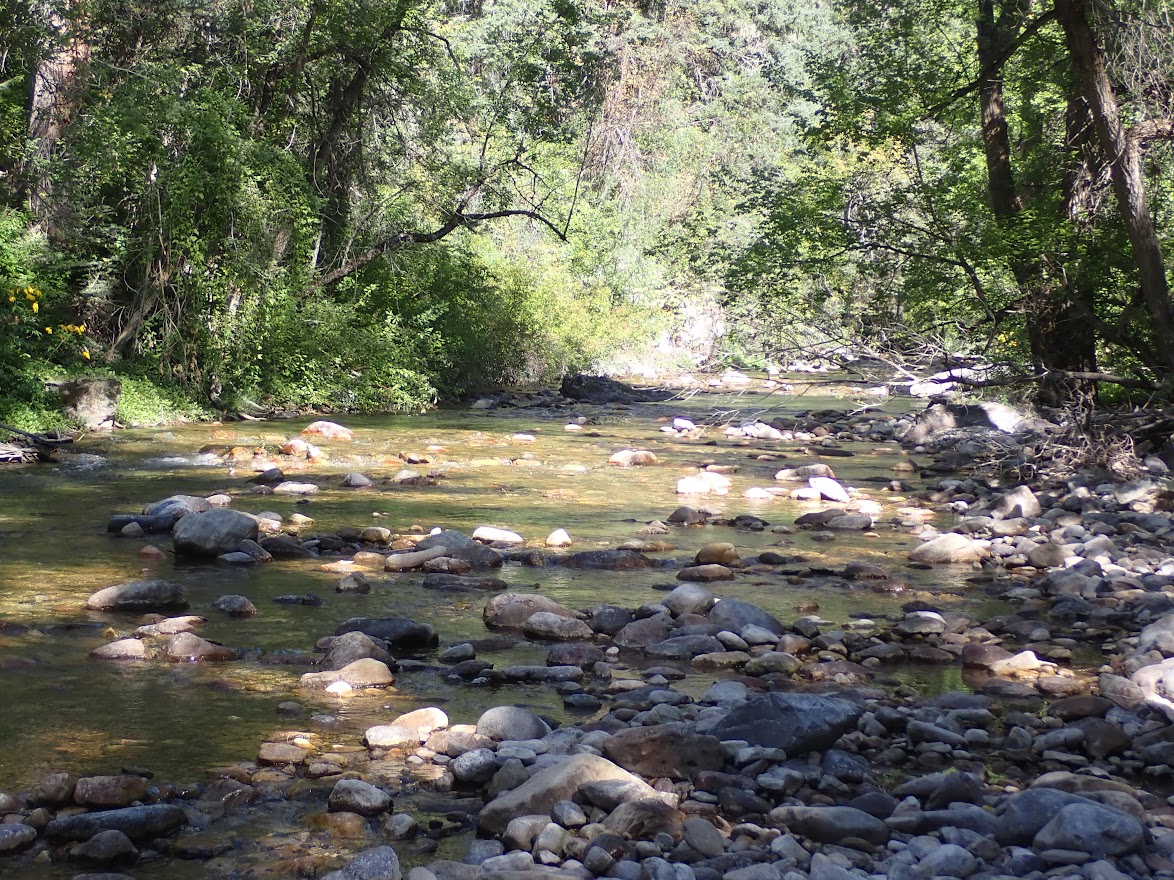 My approach paid dividends in the morning, as I landed nine trout, before I broke for lunch next to a massive hole by a large uprooted tree. The hopper attracted its share of refusals, but it also accounted for four of the nine trout, while three grabbed the salvation and one nipped the sunk ant. Two of the landed AM fish were in the thirteen to fourteen inch range, and they eventually represented my best trout of the day. After lunch I tossed the dry/dropper in the deep slow moving pool next to the root ball, and another respectable thirteen inch brown trout attacked the salvation, as the fish count mounted to ten. I photographed and released the welcome catch, and then I noticed a small triangular slot between the fast current, an exposed boulder and a large rock with a vertical wall. The main current was deflecting off the wall, and this created a nice deep hole upstream of the deflection.  I dropped a short cast in the tight space with no reaction, but a second flick caused the water to erupt, as a heavy trout crushed the hopper, with its momentum carrying it above the surface. I responded with a hook set and then applied side pressure to prevent the prize from heading downstream under a small cluster of branches. My efforts were to no avail, and the irate trout snapped off two flies. By this time I had removed the trailing sunk ant. Needless to say, this angler was quite upset with this turn of events. Not only did I lose perhaps the heaviest fish of the day, but I was now faced with re-rigging my entire setup. 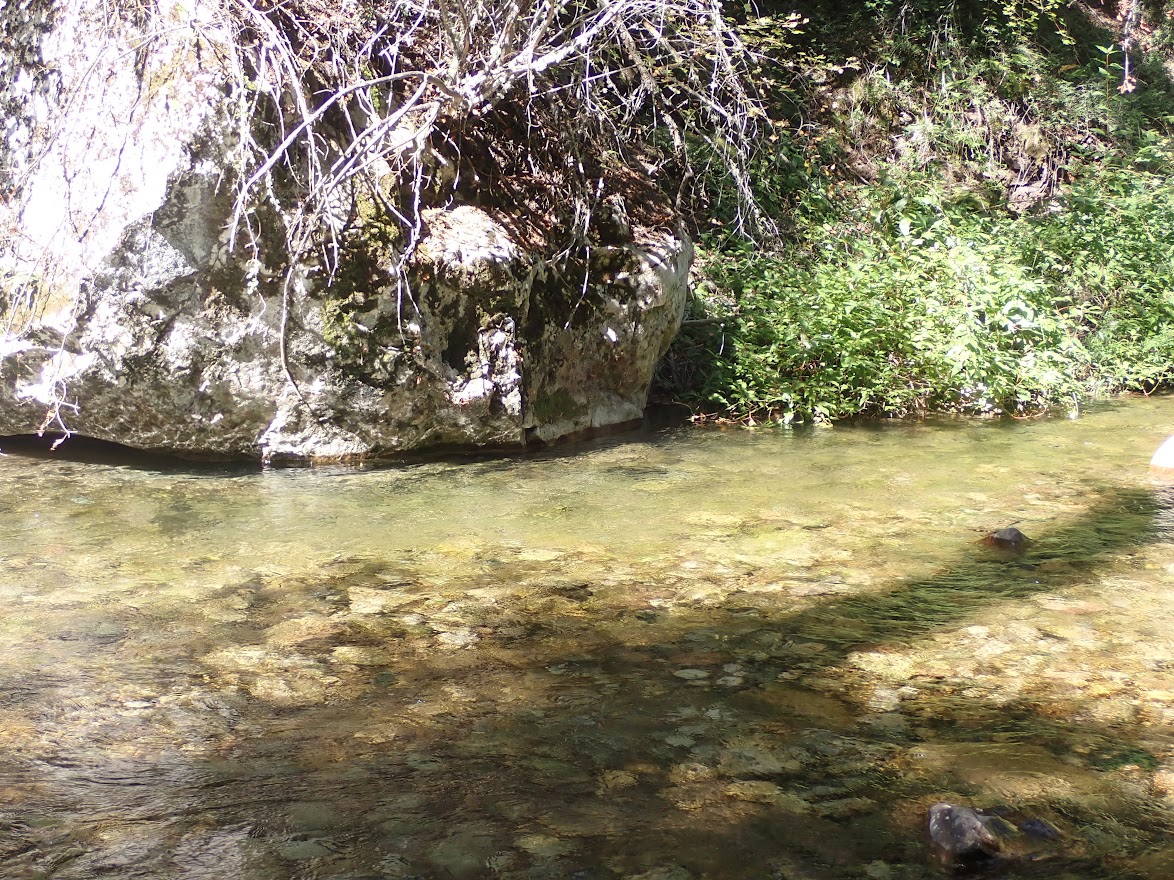 Home to a Nice Brown Trout 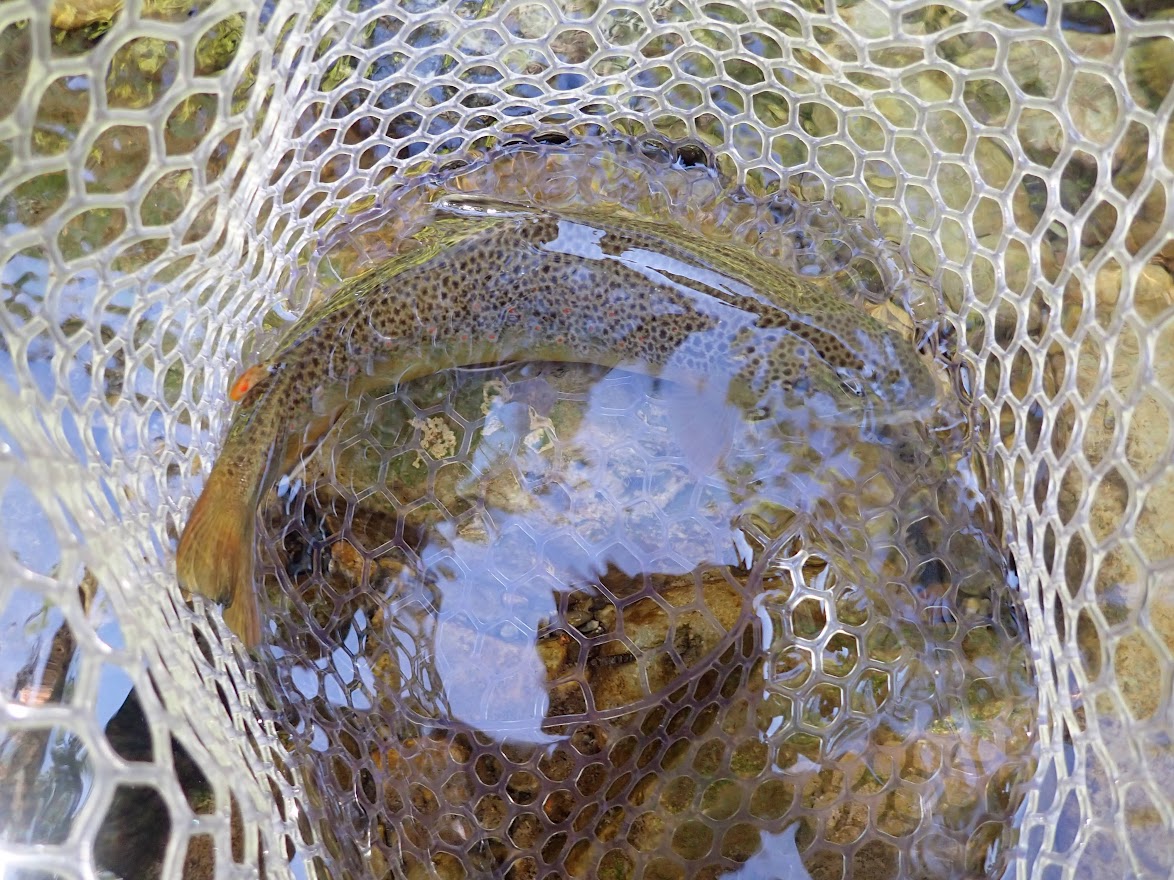 I plucked another pool toy hopper from my box and tied it to the 5X tippet. This hopper contained an amber ice dub body, and then I added a new salvation nymph to replicate my previous arrangement. I continued upstream with this combination and elevated the count to twelve, before the frequency of refusals to the hopper forced me to reevaluate. 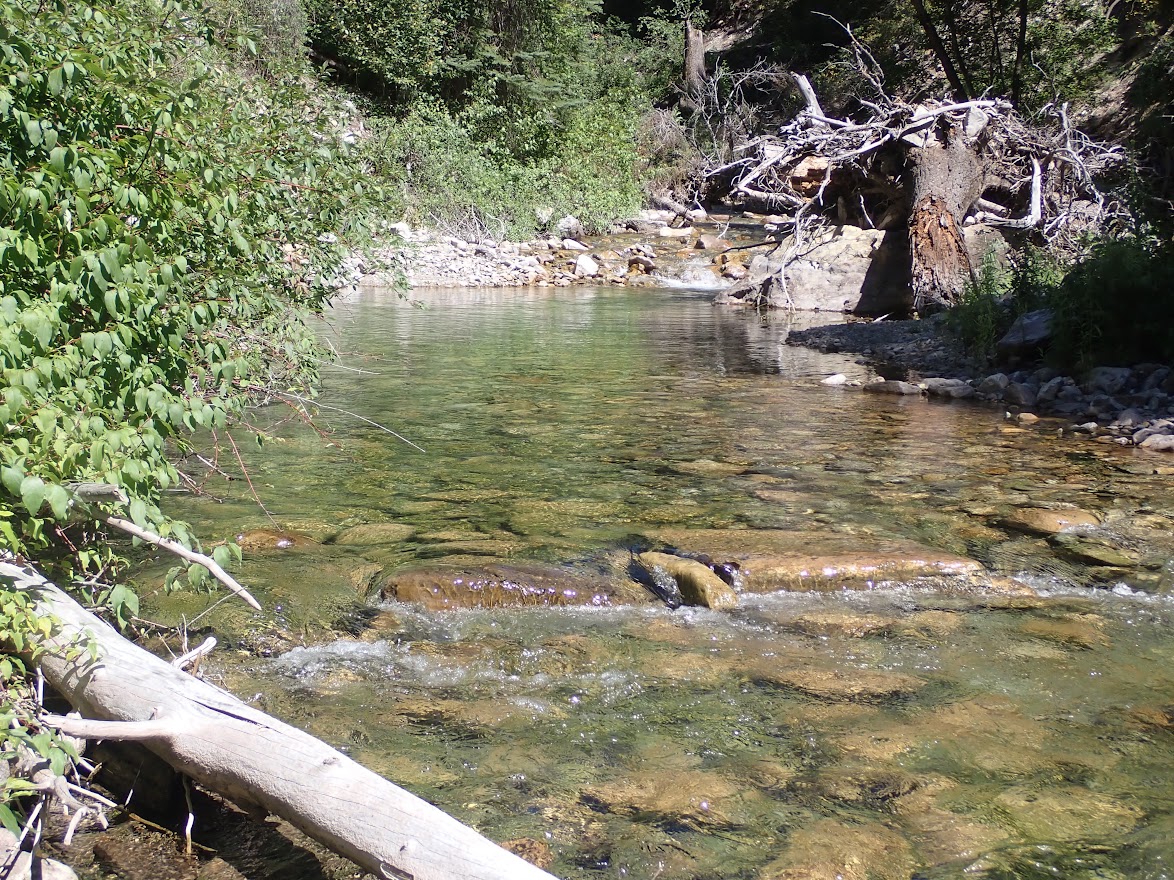 My Lunch Pool from Below 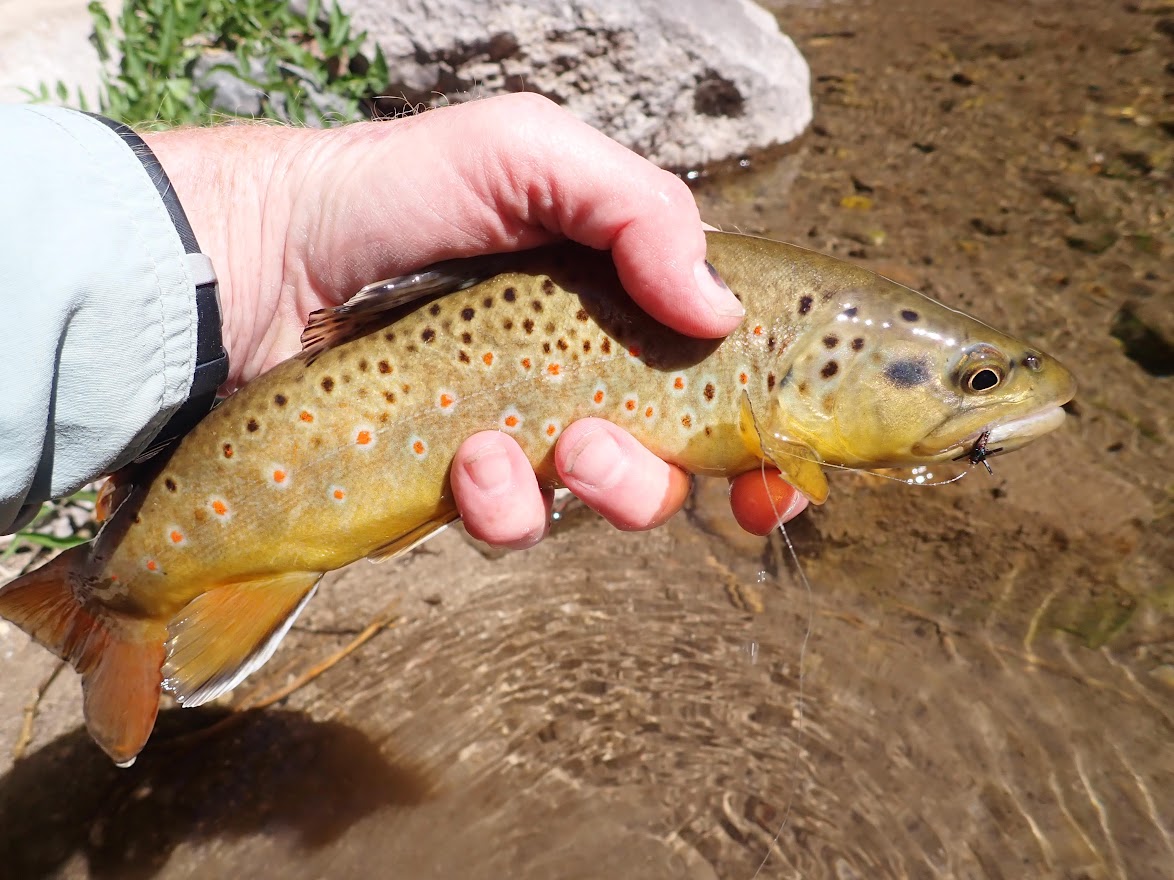 Salvation in the Corner of the Mouth

I paused and pondered and decided to continue with the dry/dropper, but I downsized the surface fly to a size 14 peacock body hippie stomper. My choice proved to be on the mark, and between 12:30PM and 3:30PM, when I retired, I increased the fish counter from twelve to thirty-four. Five of the afternoon netted trout were browns in the twelve inch range, and the remainder measured between six and eleven inches. The salvation accounted for 60% of these fly eaters, and 40% responded to the hippie stomper. 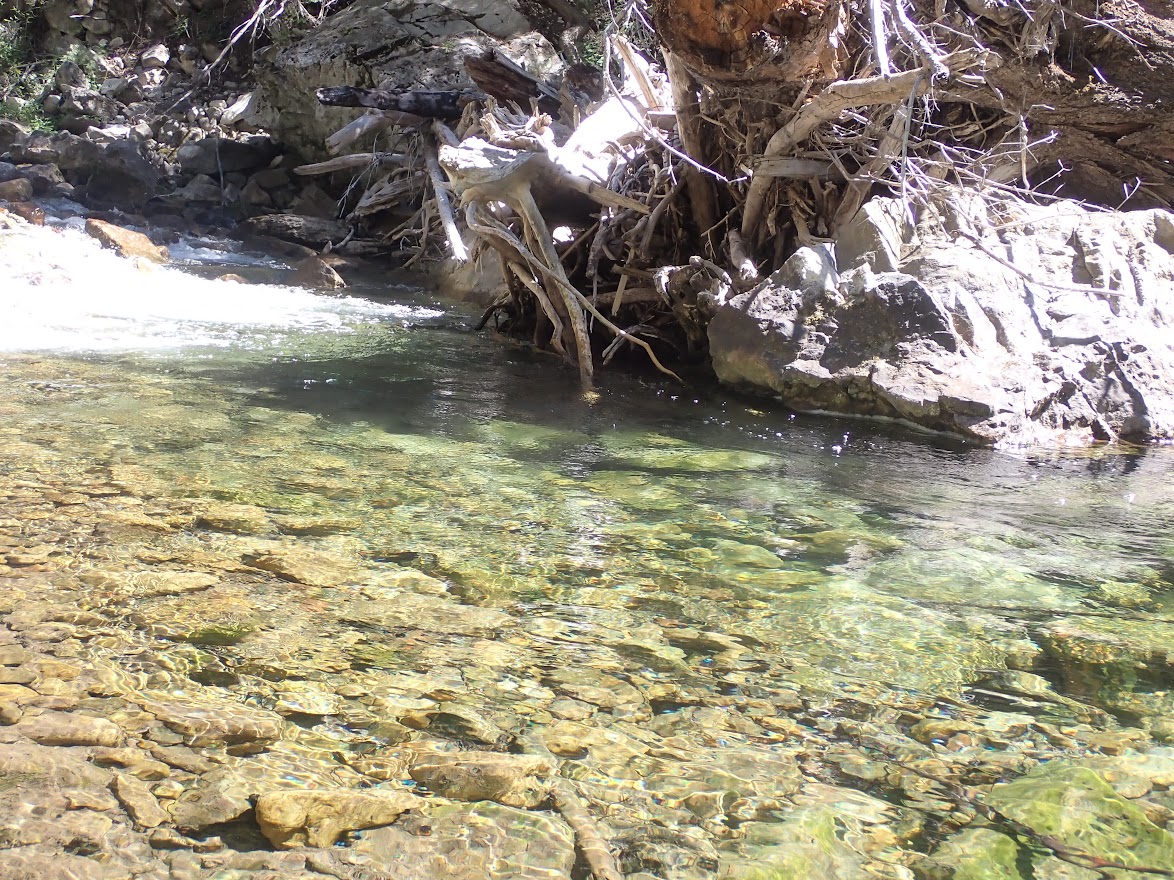 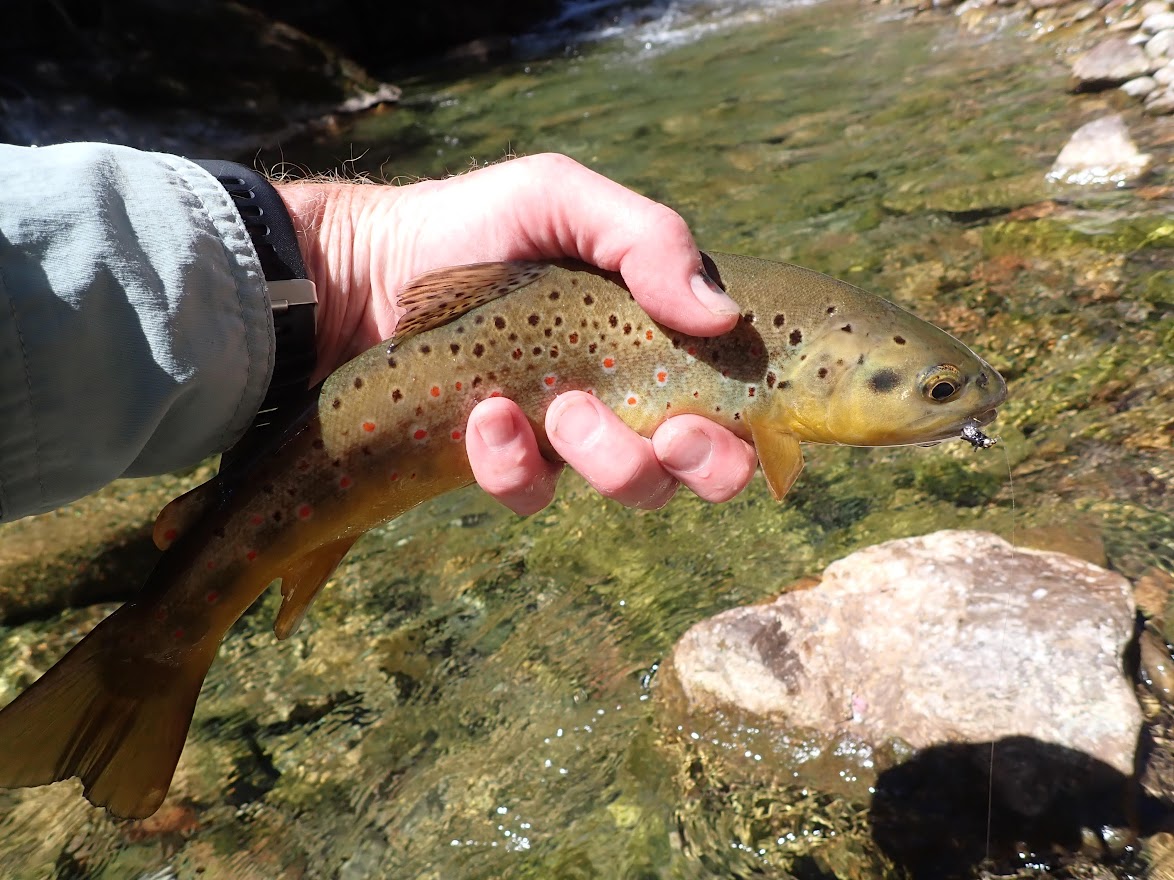 Happy With This One

I had a blast during my first visit to the high country creek on Friday. I moved steadily and kept my distance from the prime locations. This required longer than normal casts, but fortunately the creek was wide enough to enable long back casts. Deploying only one nymph minimized messy dry/dropper snarls and in turn allowed my flies to be in the water more than in my hands unraveling monofilament snarls. What a joy to watch trout magically materialize from what appeared to be a rocky streambed devoid of life. Even a small fish was a welcome surprise in these challenging conditions. 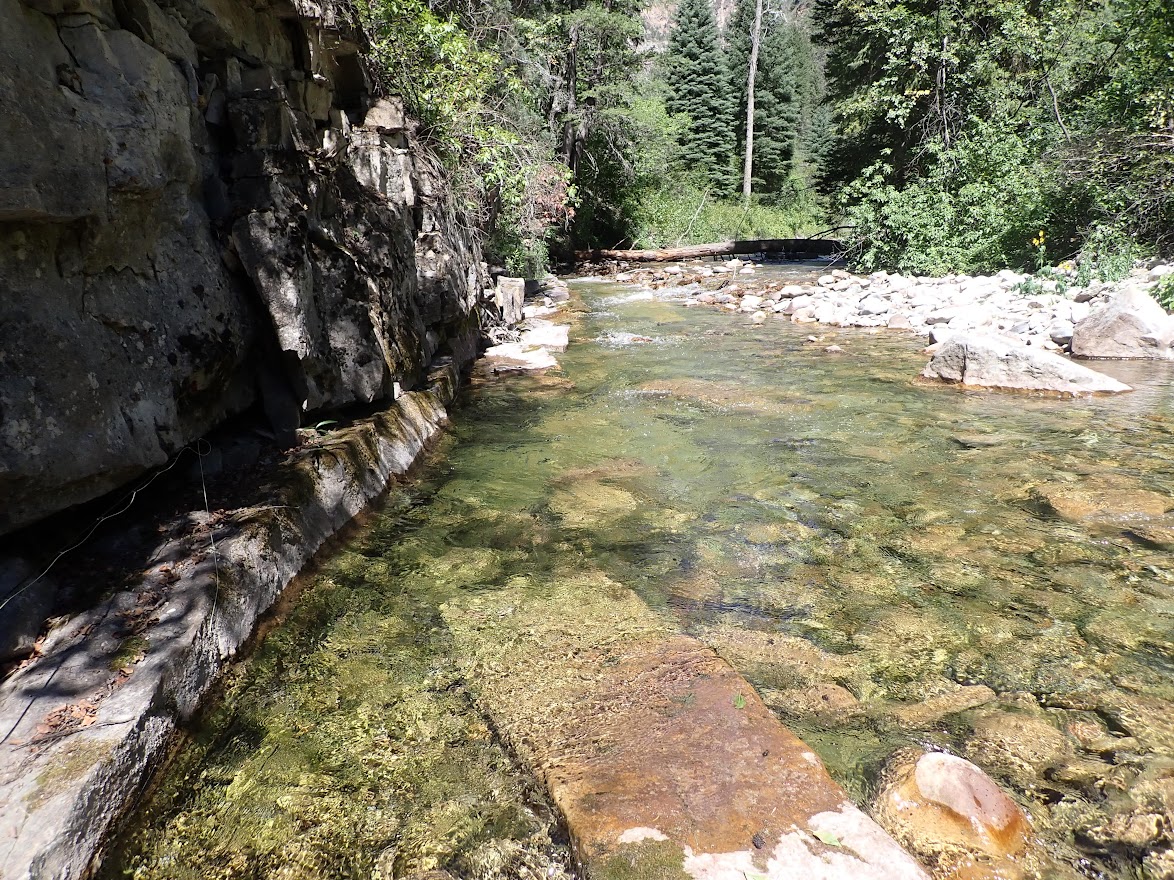 Hole Along the Ledge 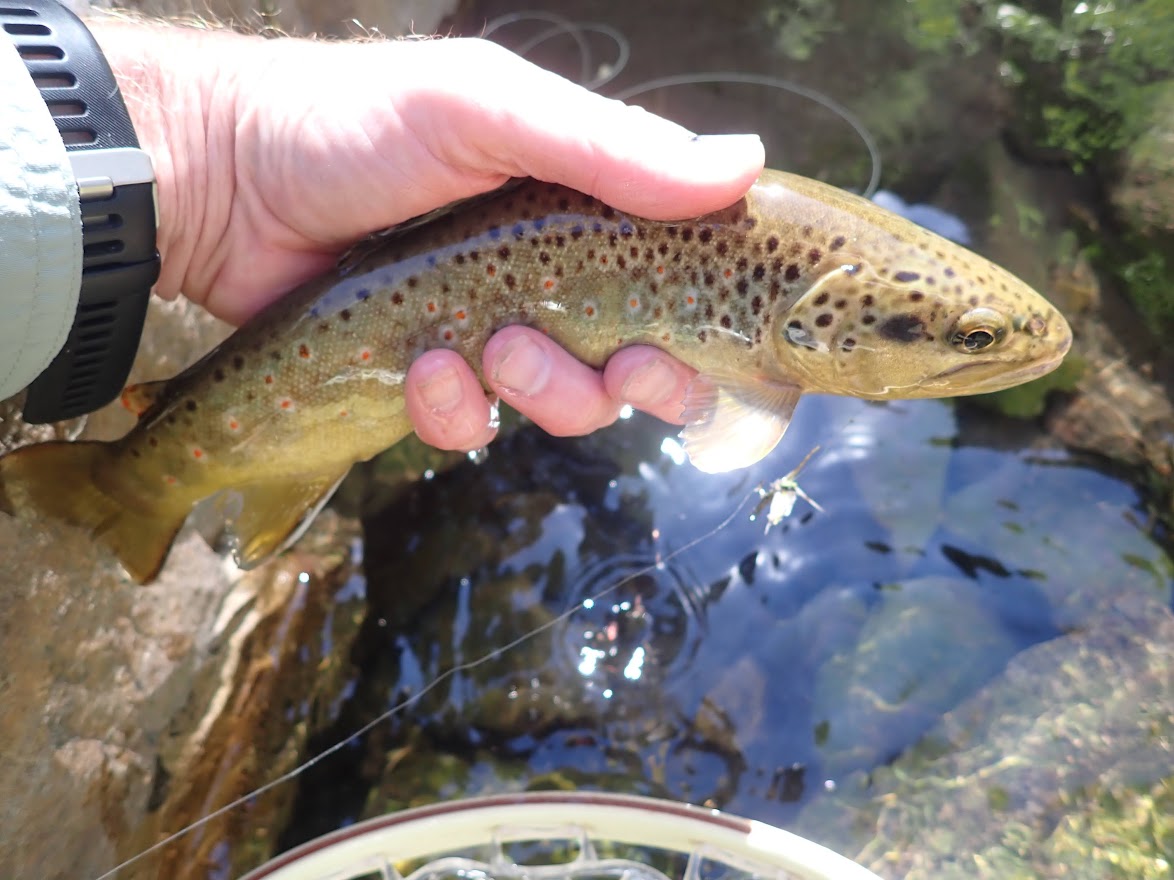 During my time on the stream, the most productive water type was riffles over moderate depth, and this condition tended to occur at the tail of deep pools. I am always amazed when a trout grabs my nymph, as the top fly accelerates at the lip of a pool, but this was a frequent occurrence on Friday. A few very visual surface grabs of the hopper and stomper in deep runs along the bank were also valued encounters. 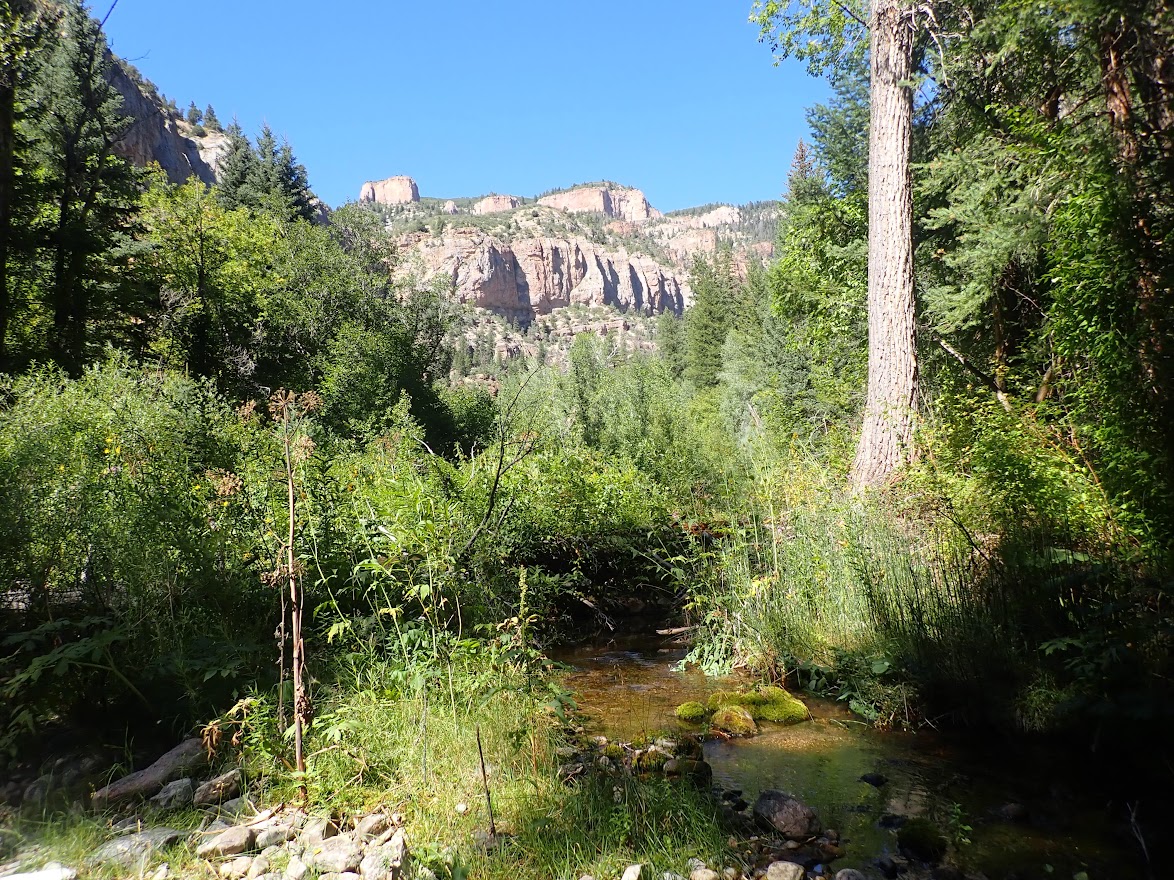 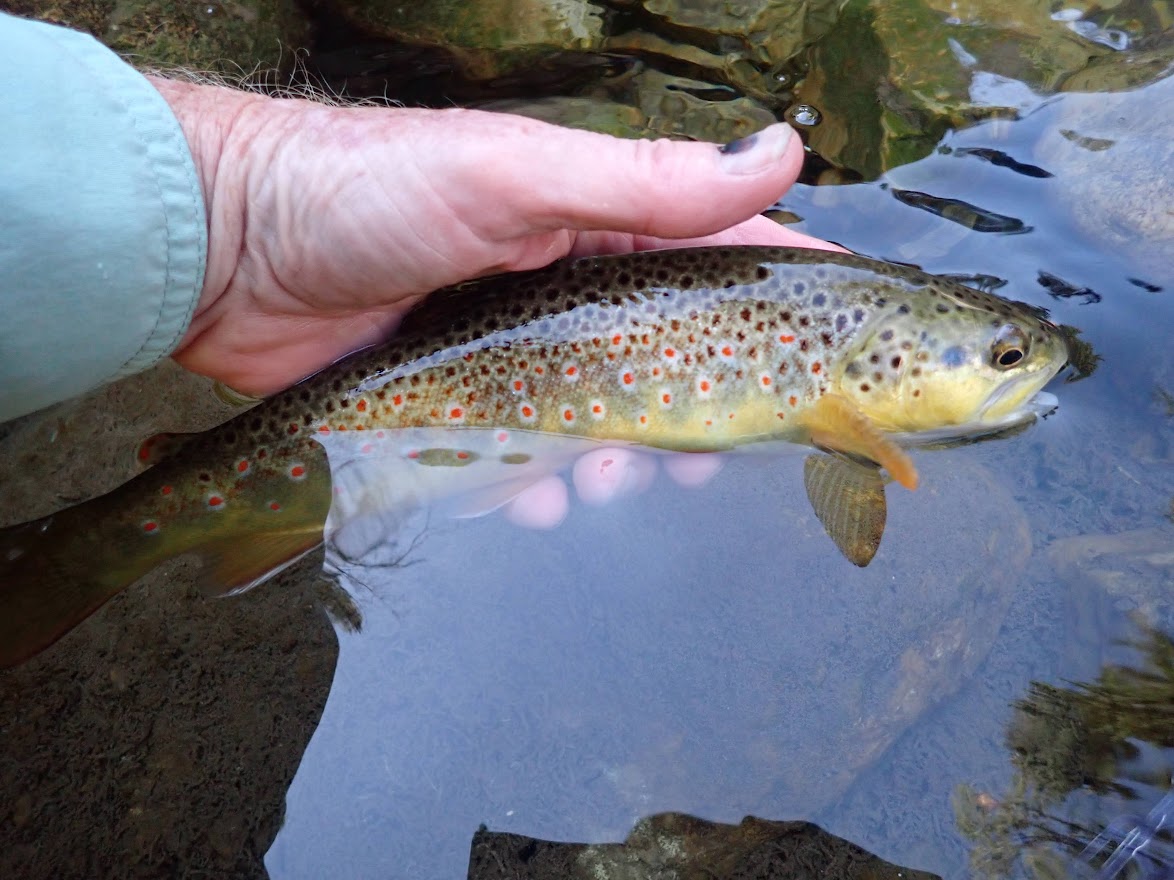 My morning apprehension gradually disappeared, as I learned to read the water and coaxed fish from spots that looked devoid of life. The combination of the gorgeous setting; cold, clear water, and willing trout certainly made this a destination I look forward to visiting again in the future.