I was eagerly anticipating an October trip to South Boulder Creek, but when I reviewed the flows at the DWR website, I was shocked to learn that the releases from Gross Dam were lowered from 103 CFS three days ago to 7 CFS. 7 CFS is comparable to fishing in puddles between exposed rocks, and it is not my idea of sporting fly fishing. I considered alternative options, and with temperatures peaking in the low 80’s in Denver I decided to take advantage and made the two hour drive to the Eagle River near Avon, CO. I knew from looking at the DWR site that the Eagle in this area was extremely low at 56 CFS, but past experience taught me that a fairly reliable blue winged olive hatch spurred surface feeding. I was banking on meeting this emergence on Tuesday, October 13 to offset the low and clear conditions. 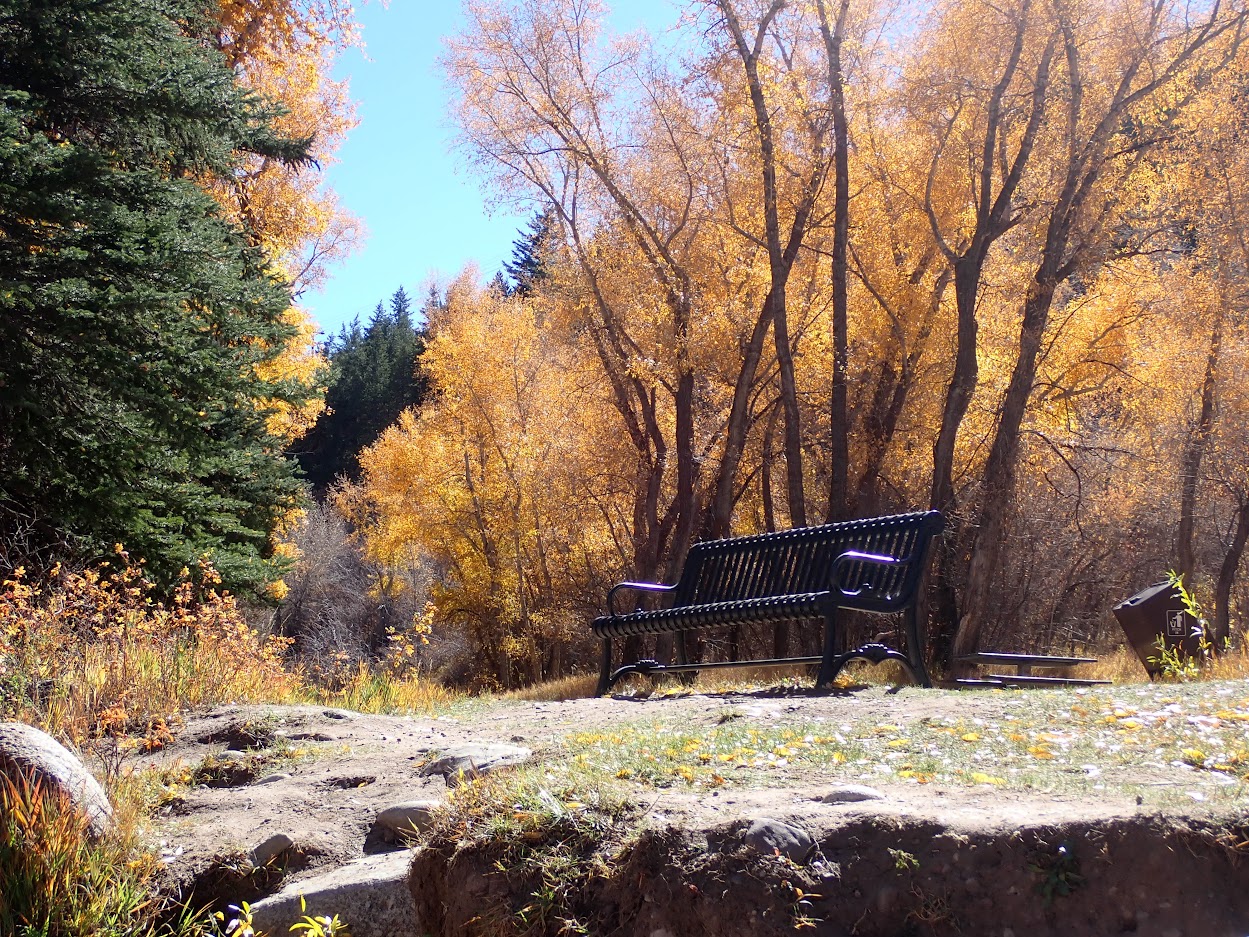 I arrived at my chosen destination on the Eagle River near Avon, CO at 11:00AM, and by the time I put together my Sage four weight and gathered all my gear and hiked to the river, it was 11:30AM. I observed the main pool for a bit, but I saw no signs of blue winged olives or surface feeding, so I rigged with a tan pool toy hopper, beadhead pheasant tail nymph and classic RS2. I prospected the upper section of the gorgeous pool next to me, but evidence of the presence of trout was absent. I progressed above the pool, and I began to explore what appeared to be marginal glides and relatively shallow water between an array of exposed boulders. I sought the places with the most depth, and I was shocked to connect with the best fish of the day in one of the easily overlooked locations. The rainbow trout stopped the hopper in its tracks, and after a relatively short battle, I slid my net beneath a sixteen inch beauty. The RS2 was barely snagged in the thin membrane of the bony jaw of the deeply colored fish. In addition to the substantial rainbow trout I also landed a ten inch brown trout on the RS2. 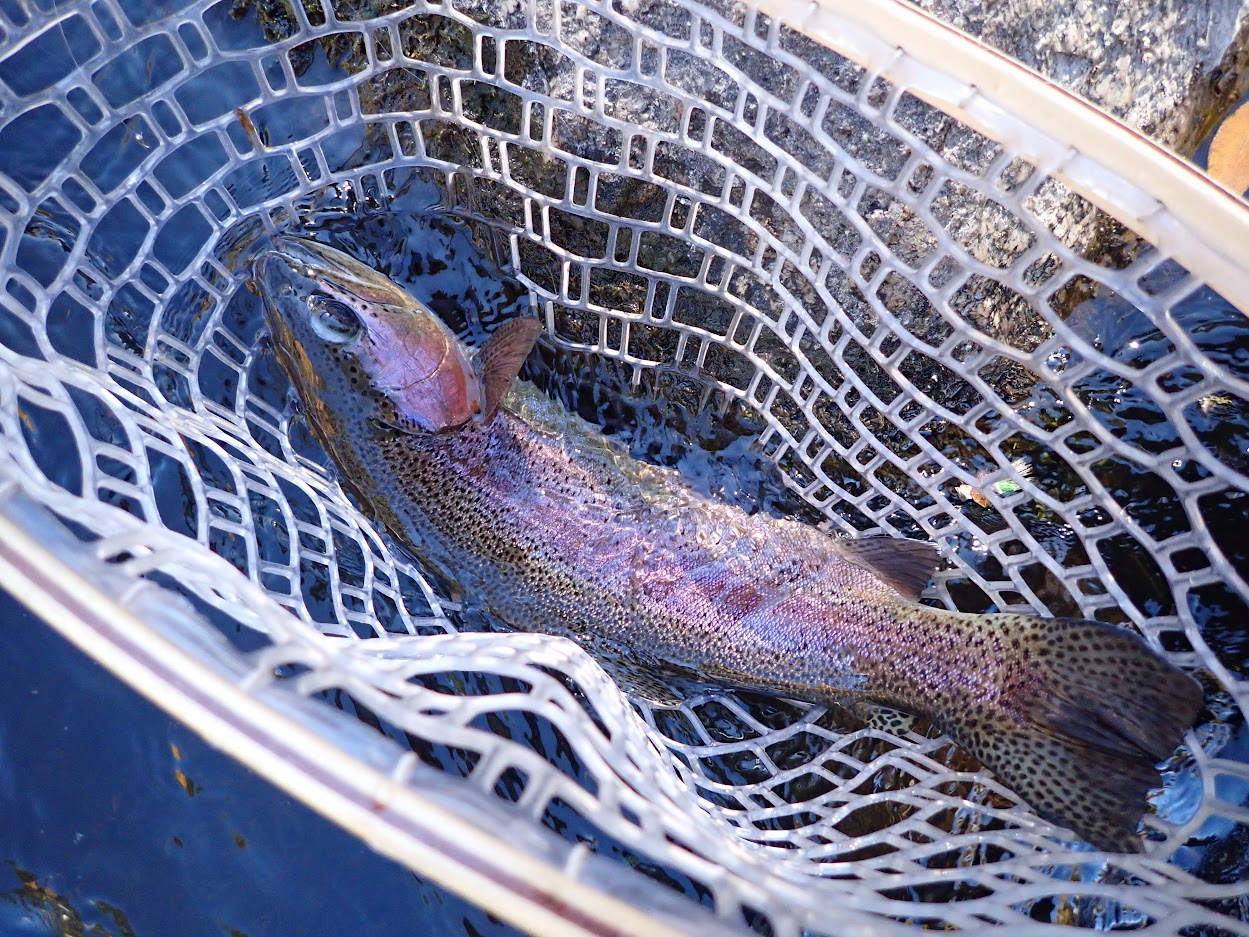 When 1PM arrived, I climbed to the bike path and returned to the main pool in anticipation of some BWO hatching activity. I was disappointed to see only placid water riffled by the intermittent gusting wind. I dug my raincoat from my backpack and pulled it over my shirt to act as a windbreaker, and I was pleased to have the extra layer in my possession. I decided to cover the nice run and riffles below the main pool, but this area yielded only a refusal. After a thorough search I moved to the tail of the huge main pool, and I covered the bottom third of the deep slow moving section with the dry/dropper, but the effort was purely an arm exercise. 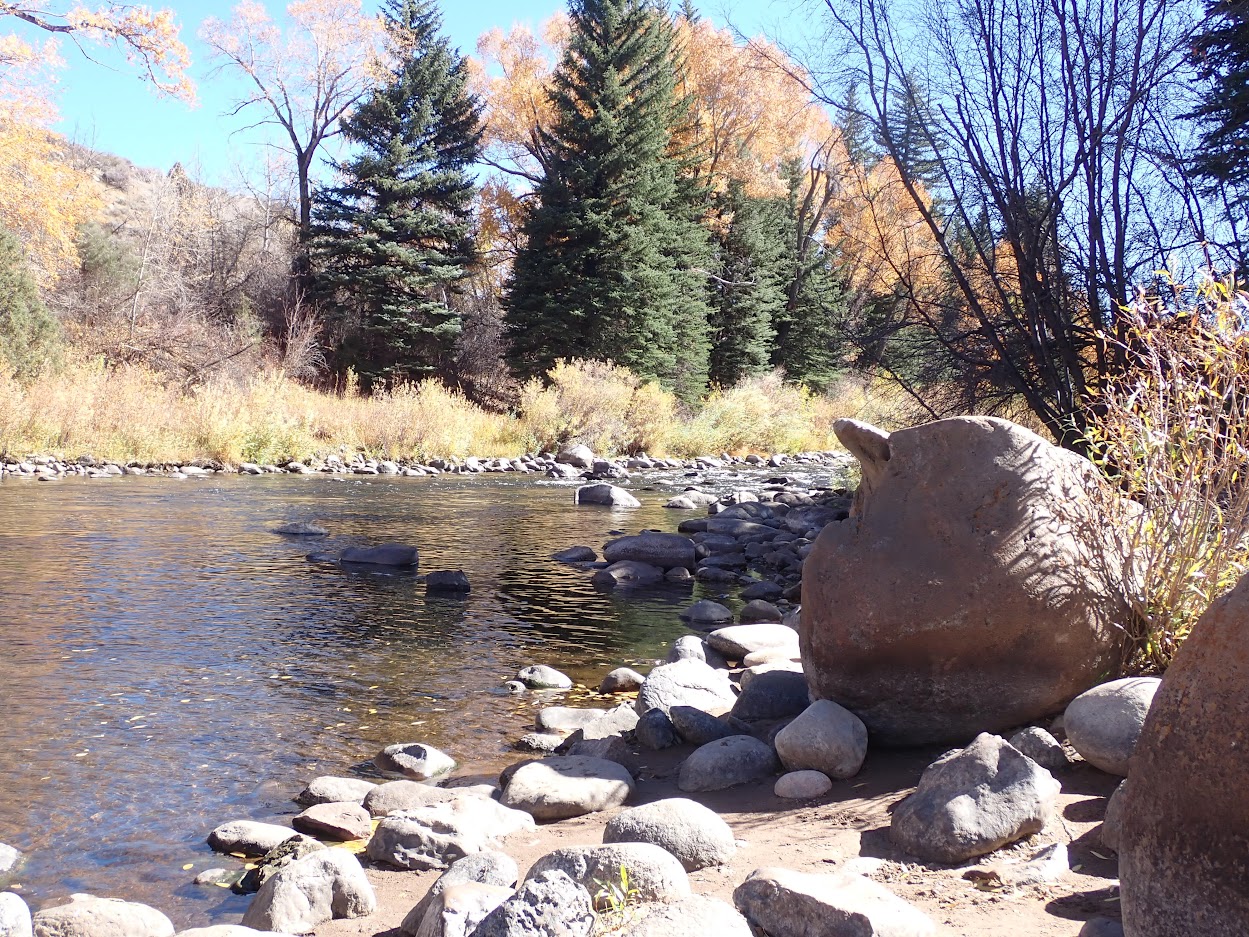 I was set up for fishing the shallow riffles in a manner similar to the earlier session, so I cut back to the south bank and hiked up the bike path to my exit point at 1PM. I re-entered the river and spent the next two hours prospecting the most promising glides that offered a bit of depth, but the results of this focused fly fishing were disappointing. I recorded temporary hook ups with two small fish and landed another small brown trout to bring the fish count to a meager three. I an effort to boost my confidence I reminded myself of the sixteen inch rainbow that filled my net earlier. 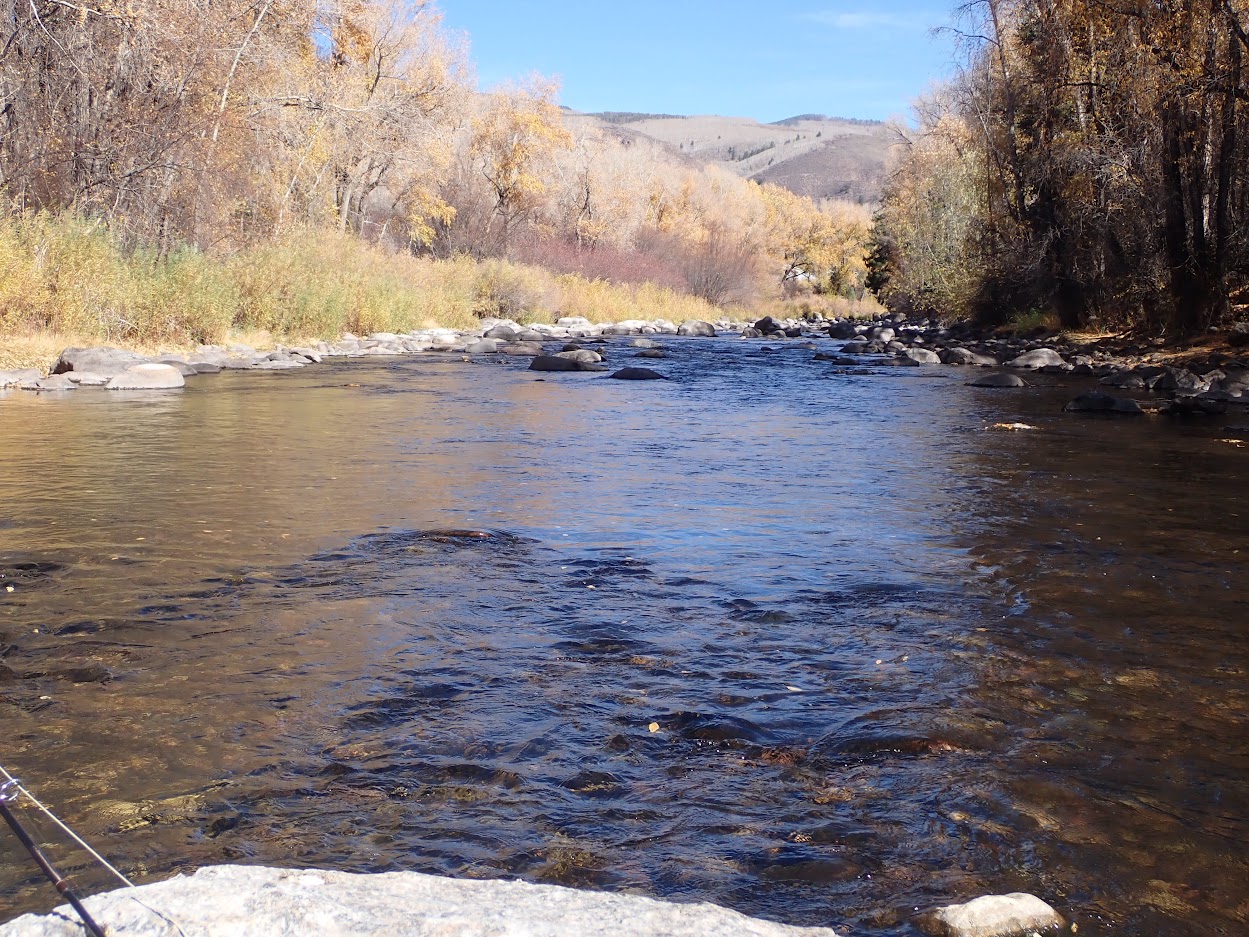 Much of My Day Was Spent on Inconspicuous Water Like This

At 3:30PM I grew weary of the fruitless wading and unproductive casting, so I decided to retreat back to my home base; the large pool where I began. I commenced fishing at the top of the pool, where I began my day, but my confidence was low, and I sensed that I was passing over fish that were holding deeper in the cold mountain water. I decided to commit to some deep nymphing, and I removed the dry/dropper flies and then crimped a split shot to my line and fastened a New Zealand strike indicator one foot below the end of the fly line. The NZ strike indicator attachment process went much smoother than the flawed experience suffered during the previous week on the Arkansas River.

I began working the center current, the seams and shelves next to my position; and after five minutes of unproductive casting the flies caught on something, as they began to swing at the end of the drift. I flexed the rod a few times, and It was clear that the snag was relatively severe. The depth and swift current precluded any attempt to save the flies, so I applied direct pressure and snapped off the beadhead pheasant tail and RS2. I patiently reconfigured my line with a salvation nymph and sparkle wing RS2 and resumed casting, but at 3:30PM my wish was finally fulfilled. I began to notice dimpling rises along both sides of the current seam. Once again I turned my attention to knot tying, as I removed the deep nymphing paraphernalia and replaced it with a single size 22 CDC blue winged olive. The pace of feeding accelerated a bit, as four or five trout fed fairly sporadically in my vicinity.

Unfortunately the wind was gusting upstream and some shadows covered the area next to me, and these natural impediments created an extremely challenging situation. It was impossible to track the tiny CDC tuft, although I set the hook several times, when I spotted rises, where I estimated my fly to be. The ploy did not work, and I was frustrated with my inability to track my small fly. I waited all day for the emergence, and now the conditions were conspiring against my efforts to take advantage of the long overdue hatch. 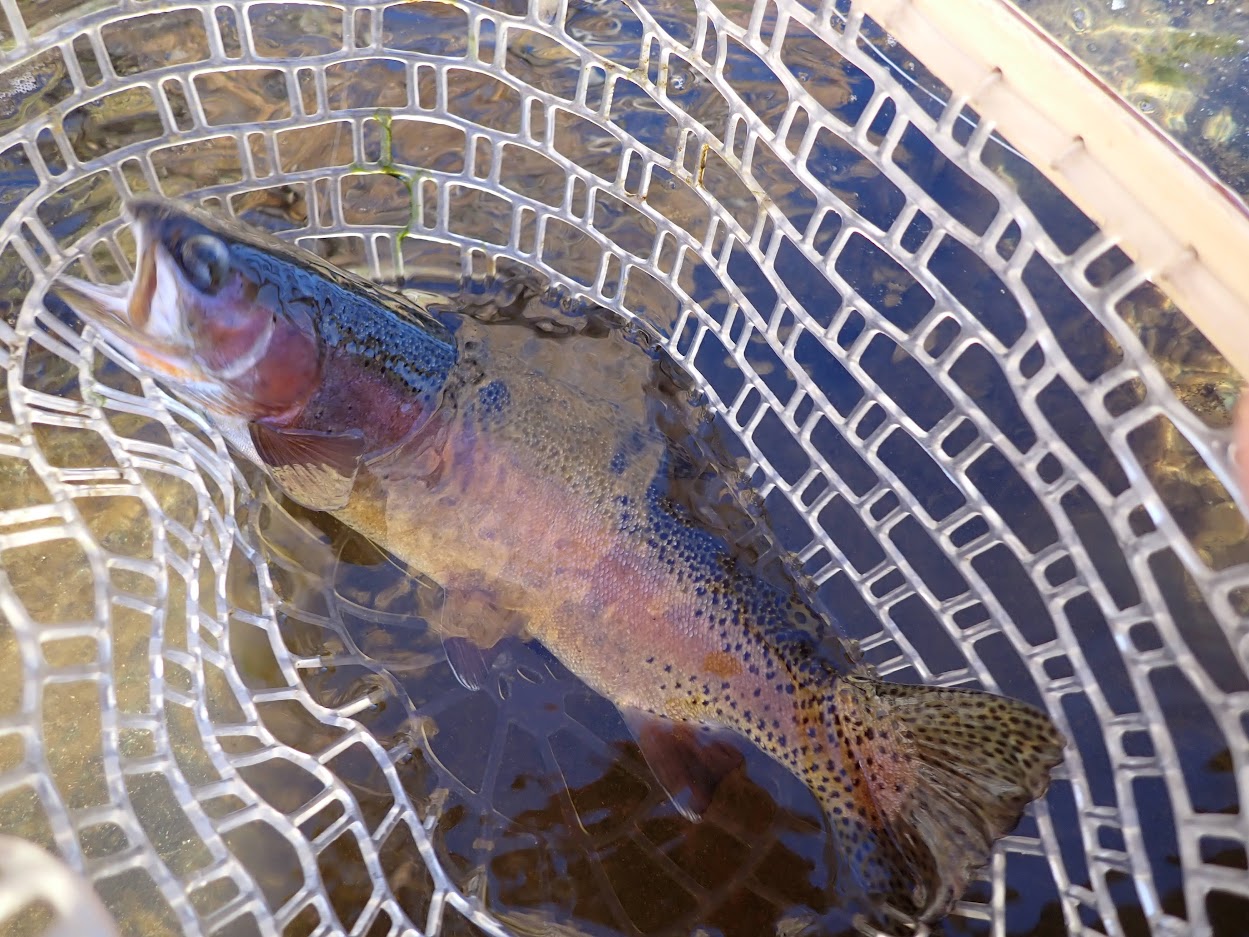 Deep Colors on This Cutbow

I paused to consider my options and noticed that the north side of the center seam was bathed in sunlight. I decided to circle along the south shoreline of the large pool, cross at the tail and then work upstream along the north bank. In this way I could approach the trout directly across from me with upstream casts and the wind behind my back. It took some doing, but ten minutes later I was positioned at the bottom of the shelf pool on the north side of the river. I carefully observed the area, and I was pleased to discover that four or five fish continued to feed. I picked out two that were across from me, but after an abundant quantity of casts, I was forced to acknowledge that my fly was not to their liking. Meanwhile a pair of trout rose more steadily in the secondary feeder run directly above me. I began to execute some forty foot casts and checked my cast at eleven o’clock, so the fly fluttered down to the faster current. I was unable to track the fly in the swirling water, so I resorted to the “guess-set” technique. On the fifteenth drift I spotted a dimple along the left side of the secondary seam, and I raised the rod firmly. Instantly I felt the power of a fine rainbow trout, and it dazzled me with an extraordinary aerial display that included at least five leaps above the surface of the river. 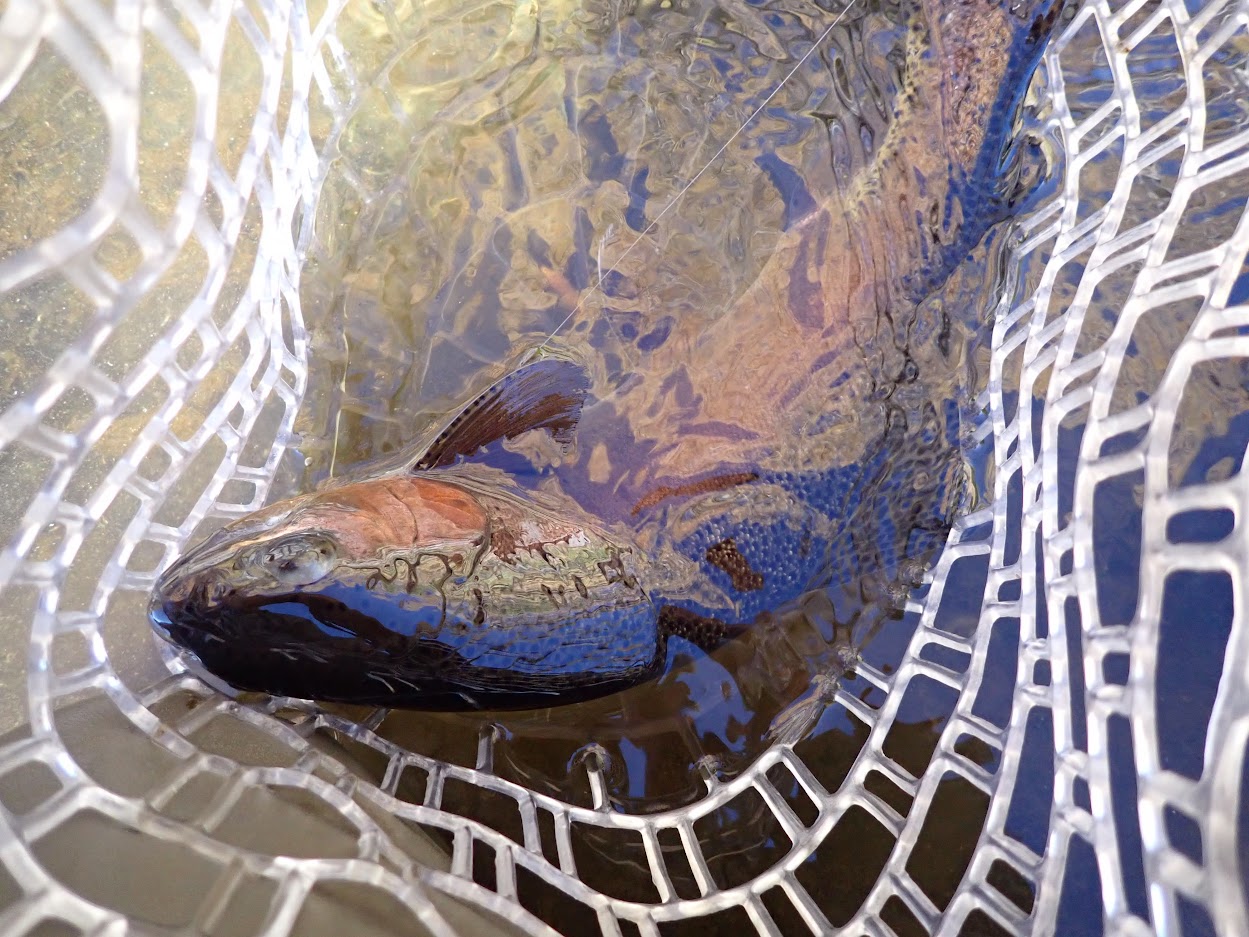 I Love the Net Shadows on This Shot

This rainbow measured around fifteen inches, and it possessed a significant girth. I was very pleased that my circuitous route to the opposite side of the river was rewarded with a fourth trout. After I released the brute, I resumed casting, but the surface feeding waned. In a last gasp attempt to fool another trout I replaced the CDC olive with a size 20 soft hackle emerger. I applied floatant to the body of the wet fly to make it float, and I sprayed casts across the wide shelf pool area; but, alas, the late ploy did not produce.  I reeled up my line and called it a day and then crossed in the wide shallow area above the long pool.

Four fish in 4.5 hours of fishing is clearly a low catch rate, but two rainbows in the fifteen to sixteen inch range compensated for the lack of volume. The cool wind, lack of clouds, and low clear water presented very challenging conditions, so I was pleased with the success that I managed. Bright sun, lack of clouds, and low, clear water seems to be a recurring theme during the autumn of 2020. I will continue my pursuit of trout, until conditions become too extreme.