After a warm up on the Frost Creek Pond on Sunday, my friend, Dave G., and I decided to test the Eagle River on Monday, October 7. As we drove from his house to the river, he lamented a recent string of poor outings, when he managed only a few small fish. My expectations ratcheted downward upon hearing this news.

One location where Dave G. did enjoy positive results was the confluence of Brush Creek and the Eagle River below Eagle, CO, so that became our first stop. Unfortunately when we pulled into the open space parking lot, we noted two vehicles, and we concluded that the confluence section was the favored destination of the anglers that preceded us.

We amended our plans and decided to travel upriver to find a new location for our fly fishing adventure. I was surprised by how many pullouts along the Eagle River were occupied with vehicles on a Monday in October, but Dave G. and I concluded that many people extended their weekend stays through Mondays to avoid the heavy traffic on Sunday afternoon. The balmy autumn day may have been another contributor to the greater than expected river population. 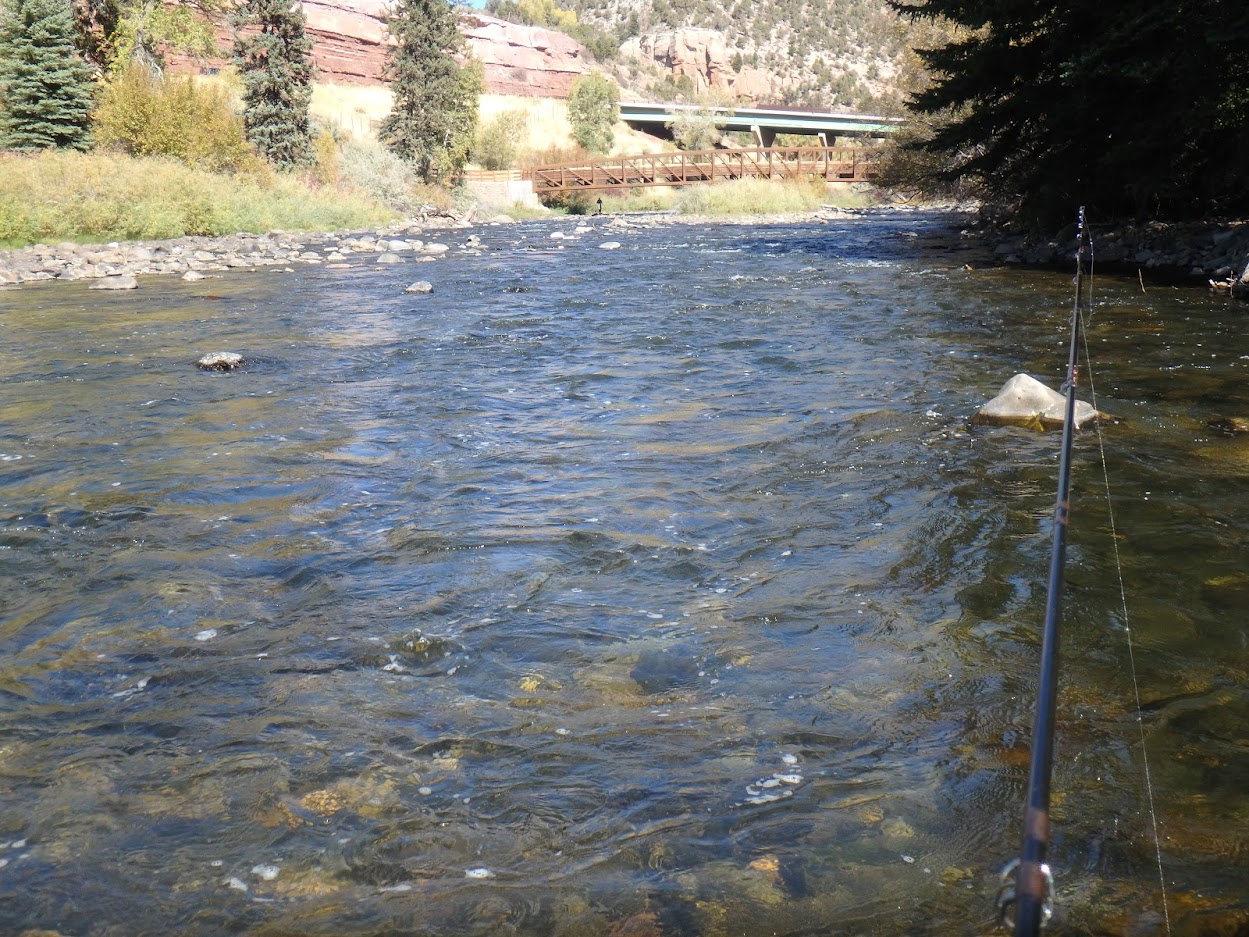 After a short drive we arrived at the Horn Ranch open space, and a cluster of cars filled the lower lot and the area next to the old concrete bridge. The new parking lot just below the Interstate 70 overpass; however, held only two vehicles, and we could see two fishermen in a quality hole just upstream. We gambled that a bit of walking would gain us separation and decided to make the north end of Horn Ranch our Monday fishing destination.

I opted for my Sage four weight on Monday, since it was less taxing on my wrist, and I expected to stay on the water for a longer time than Sunday. Dave G. and I crossed the new footbridge and ambled downstream along the recently completed bike path for a decent distance, until we found a worn path and cut over to the river. Dave G. remained on the west bank, and I crossed to fish up the east side. 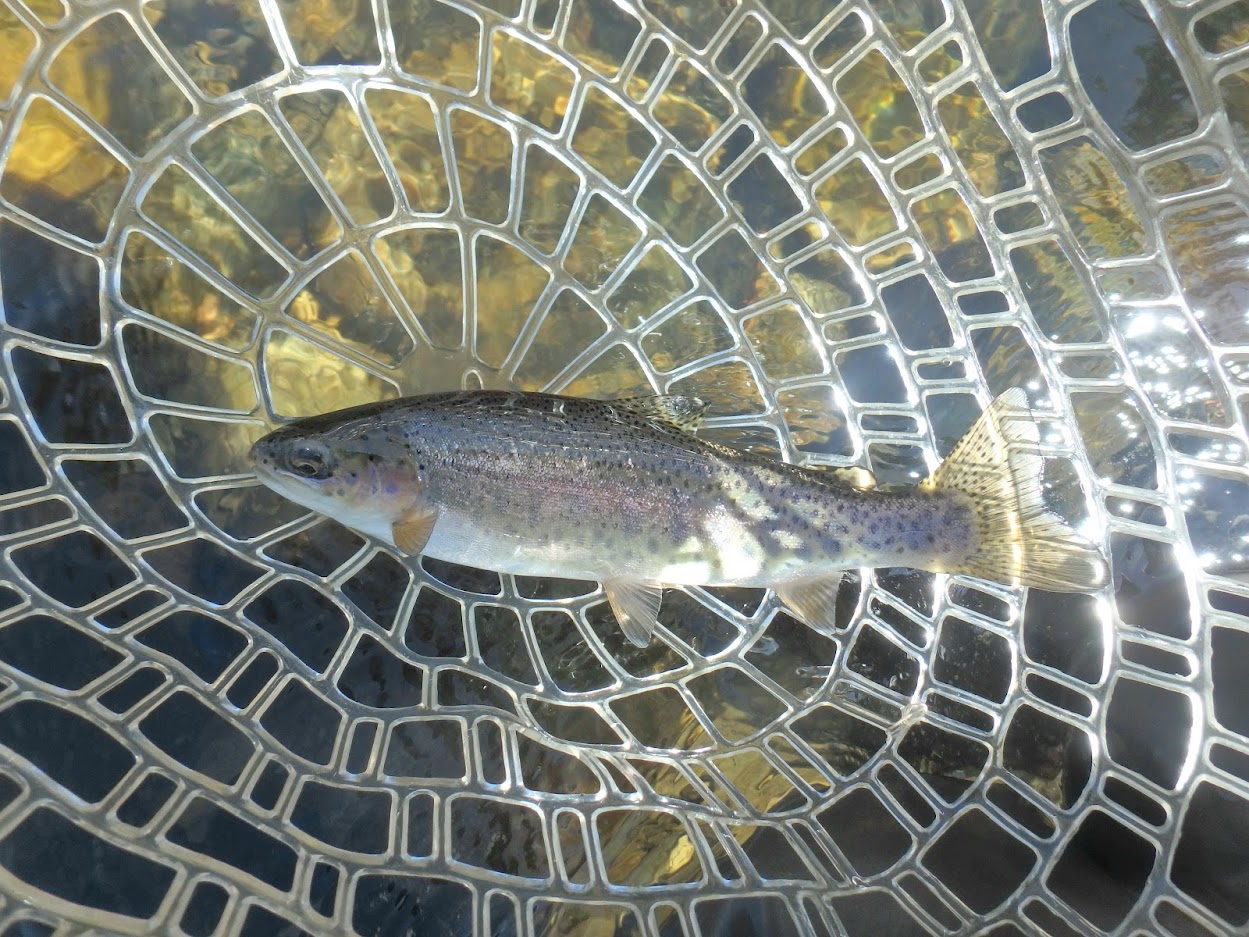 Small Rainbow in the Early Going

Flows were seasonally low, and the air temperature was in the upper fifties. I began with a tan pool toy, beadhead hares ear, and a salvation nymph; but after thirty minutes the fish count remained locked on zero. Dave G. picked up three fish on a Pat’s rubber legs, so I modified my lineup and replaced the hares ear with an iron sally. Another lengthy drought elapsed, and it was 1:30 PM, so I swapped the salvation for a RS2 with the hope that baetis nymphs were active. Finally this combination clicked, and I netted two six inch rainbows and an eight incher. The first small rainbow inhaled the iron sally, and the other two catches snatched the RS2. In addition I hooked and failed to land four trout including a rainbow that was likely fifteen inches or greater. Another ‘bow of thirteen inches was nicked in front of a large submerged boulder. 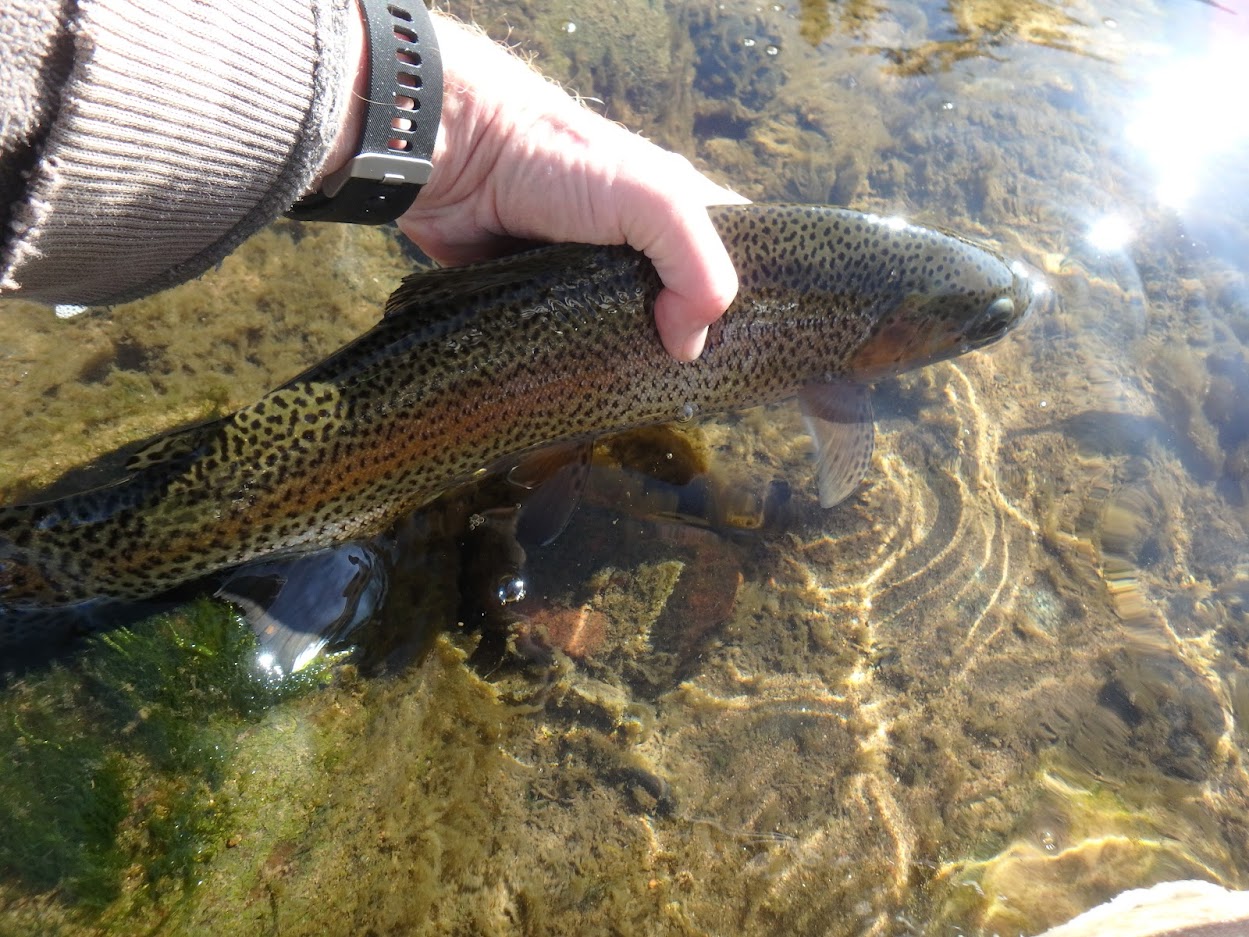 By 2PM we reached the footbridge, so we crossed and hiked downstream a second time to an old concrete bridge, where we munched our lunches. After lunch I once again waded to the east side of the river, and I began prospecting likely deep runs and moderate riffles. In the first twenty minutes I connected briefly with a muscular rainbow, but it quickly shed the small RS2. A short while later a sizable trout, possibly a brown, swirled around and then crushed the hopper. I maintained tight tension for a few seconds, and then another decent Eagle River trout escaped. Needless to say, quite a few angry expletives flowed from my lips. 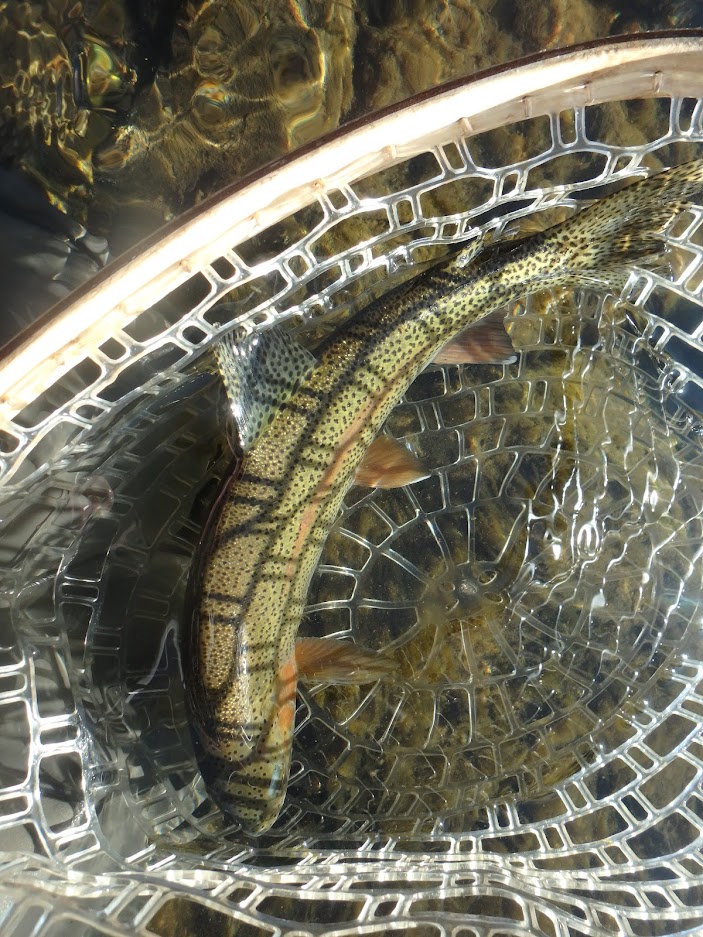 I persisted in spite of my ill fortune, and I was pleased to finally hook and land two very respectable rainbows of sixteen and fifteen inches. Both fish were very thick and fought valiantly to avoid my net. The last hour was very slow, and I finally found a path to the footbridge parking lot at 5 PM.

Five fish landed in five hours represented a very slow catch rate; however, the two late afternoon rainbows justified the effort. I was not without opportunities, as I hooked twelve fish and observed three refusals during my afternoon on the river. Dave G. logged a fine day with ten netted and six long distance releases. I explored a new section of the Eagle River, and I was favorably impressed. A future return is very likely.