Lady Luck withdrew her good fortune on Friday, September 11. After three spectacular days of fishing in the Flattops area of Colorado from Tuesday through Thursday, I returned to the reality of lower elevation fishing in early September.

I woke up early at the North Fork Campground and managed to pack up my camping gear and depart by 8AM. I was off to an early start and hoped to hit another river in proximity to my return route to Denver, but much to my dismay, as I turned on to the main gravel road that follows the North Fork of the White River, a large flock of sheep came into view ahead of me. There were gray chunks of bleating animals everywhere. They filled the road and spilled over into the brush on both sides of my return route from the Flattops. Two shepherds on horseback attempted to keep the group moving in a reasonably straight path. 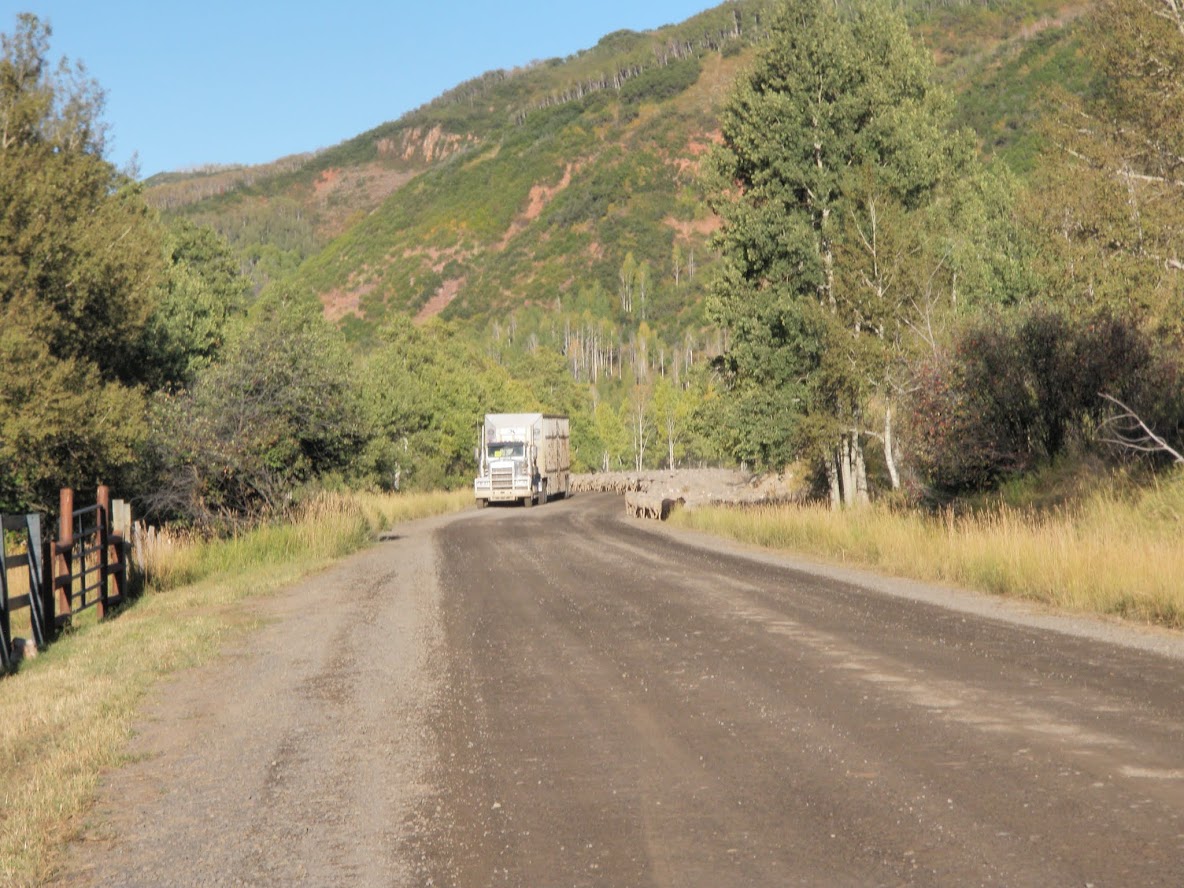 A Tractor-Trailer Passes Through the Flock of Sheep

I’ve encountered these September sheep roundups in previous years, so I knew the drill. I slowly pulled up behind the dense moving gray and white cloud and began to nudge my way forward. Slowly the flock parted just like the Red Sea at the command of Moses, and I was able to creep through the mass. Once I reached the other side, I drove a safe distance ahead, and stopped to retrieve my camera which was stowed in the back of the car. As I turned to snap a photo or two of the wave of woolly creatures, I noticed a large tractor/trailer was now following my path, and it was surrounded by the sheep just as I had been several minutes earlier. I took a photo of the large vehicle in the midst of mayhem, and then snapped a couple more of the flock totally covering the road. I determined that the tractor/trailer was actually the destination of the bleating mass, as they were probably being transported from their high elevation summer home to somewhere else down low. I choose not to think more about their future. 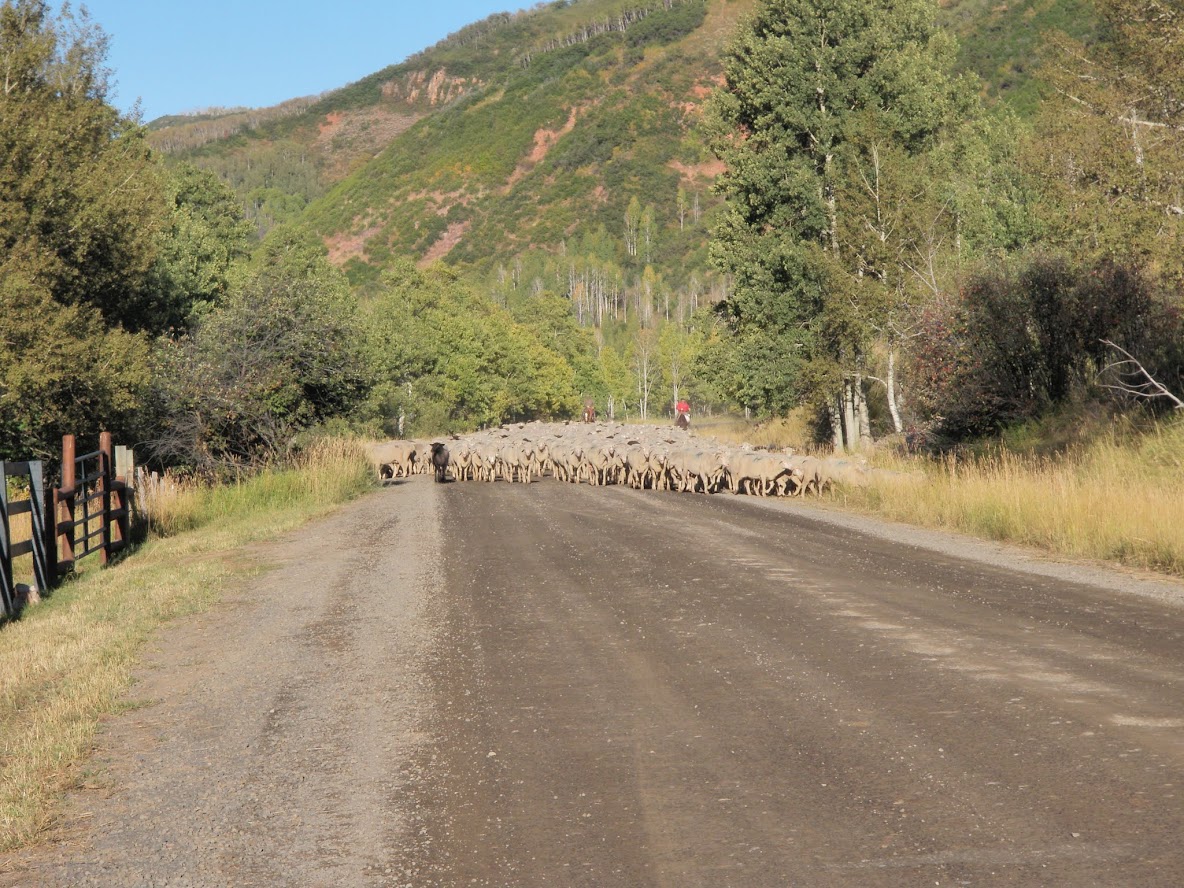 I Better Get Moving or Be Overtaken Again

Once I was beyond the animal traffic jam, I made good time and traversed the 36 mile gravel road to Phippsburg and then turned right and followed Colorado route 131 to Wolcott. At the end of July while biking through Glenwood Canyon with the Vogels, I became intrigued by the possibility of fishing the Colorado River between the Shoshone power plant and Grizzly Creek access. Friday was to be the day that I acted on this plan, so I took the entrance ramp to interstate 70 and traveled west. I knew that this was a bit risky, as extensive construction was taking place in Glenwood Canyon, and I was inviting possible traffic delays.

As I entered the canyon and quickly surveyed the river to my left, I was disappointed to see a deep dark green water color. This was not the clear conditions that I expected nor anywhere close to what I observed up close during our bike ride. The river however did not appear to be muddy or brown, so I consoled myself that there would be reasonable visibility along the edges, and that was the only part of the large dangerous river that I planned to fish.

Bad assumption. When I reached the construction zone, I discovered that I had to travel at 45 MPH through the entire canyon to Glenwood Springs before I could exit and then travel back east. When I motored beyond the power plant and gazed anxiously at the river, I was surprised to see that it was now the shade of coffee with an ounce or two of milk added. This was an unexpected and highly disappointing discovery. I made my U-turn at Glenwood Springs and traveled east to the Grizzly Creek rest stop where I exited and parked, so I could inspect the river more closely. I walked along the bike path until I reached Grizzly Creek which was running crystal clear, but when I cut down the bank of the main river, it was very opaque with no visibility along the edge. I tried to convince myself that perhaps a black fly that contrasted with the color of the river would yield success, but at that point I decided that I was only fooling myself, and the exploration of the Colorado River was best left to another time.

I re-entered the interstate and crept along at 45 MPH until I finally exited the eastern end of the canyon and continued along to the Eagle River. I fished the newly public Horn Ranch section of the Eagle for a couple hours in July, and this whet my appetite for more time on this stretch of water. I pulled into a parking space along route six halfway through the conservation land and another car preceded me. I decided to eat my lunch on the old concrete bridge, and as I wandered out to a position where I could look upstream and down, I was disappointed to see two fishermen. One gentleman had crossed the bridge and was thrashing through the middle of the river upstream, and another angler was positioned one hundred yards below the bridge on the side next to the road. This was actually where I wanted to fish, and I was tempted to drop in halfway between the downstream fisherman and the bridge, but I realized that if I were that person, I would probably be upset by such a move.

Crestfallen with another dose of adversity, I finished my lunch and jumped back in the car and drove another half mile to the Climbing Rock Campground. I parked and finally donned my waders and prepared to fish. I rigged my Sage four weight and walked across the railroad bridge to the north side of the river. The Eagle River is notoriously tough for me at the low flows of late August and early September before air temperatures drop and the fish become more active, and the temperatures in the low seventies on Friday seemed to place this outing in the doldrums period. I slid down the bank and began fishing in a delicious deep side pool above the bridge that featured a huge foam patch between the bank and main current.

I tied on a gray pool toy and then added a salvation nymph and ultra zug bug and began to prospect the attractive water before me. Unfortunately I methodically advanced through the long deep pool with no action, but then at the riffles at the head of the pool, the hopper dipped, and I set the hook and retrieved a twelve inch brown trout that fell for the salvation nymph. I was elated to avoid a skunking, and the feisty brown was actually beyond my expectations. 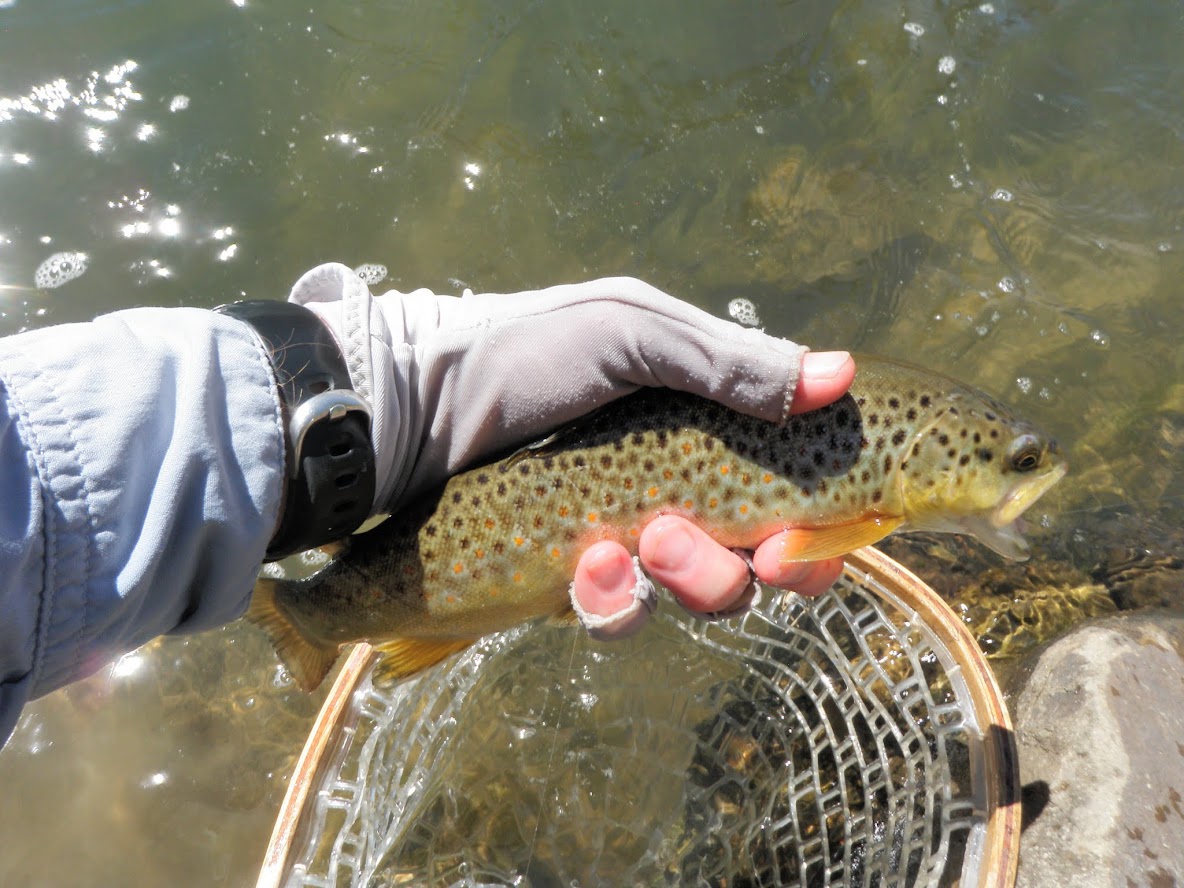 12″ Brown from the Eagle River

I continued fishing in this manner and landed a second smaller brown that snatched the ultra zug bug, and this fish came from a short but deep pocket along the bank. I was beginning to suspect that my best chances for fish were from pockets in the fast oxygenated water on a relatively bright sunny warm day. My optimism zoomed, and I skipped some slower moving water to reach more pockets, but I encountered a troubling sign. The large placard warned that there was no trespassing and no hunting, and this information was the product of Denver Water. I fished this area previously, so I rationalized that the sign was intended for hunters, and harmless catch and release fishing was exempt.

I ignored the sign and fished up the river for another fifty yards and actually hooked two more fish that escaped before I could net them, but I did not feel comfortable ignoring the sign. It clearly stated no trespassing and made no exceptions, and I did not want to ruin a wonderful week of fishing with a fine, so I elected to turn around and return to the public water. I ascended the path to the railroad bridge and then followed the tracks downstream before I cut back to the river via a path down a steep bank. The water below the bridge was much more placid and offered no pockets which would have been my preference. The deep pool in front of me with a steady center current screamed for a deeper approach than I could offer with my dry/dropper set up, so I converted to a strike indicator, split shot, and two nymphs.

I probed the top of the long deep pool with my nymphs but to no avail, and then I moved up to a wide shallower riffle section and worked the nymphs there. The nymphing gambit was not delivering results, and my watch was showing that 2:30 was approaching, so I called it a day and returned to the car. An uneventful two hour and fifteen minute drive returned me to Denver, and I could assert that I spent five hours driving and one and a half hours fishing on Friday. I avoided a fishless day by landing two small brown trout, and I gained significant appreciation for the fantastic experience that I enjoyed in the Flattops on Tuesday, Wednesday and Thursday.