No rain fell on Thursday evening and for a change Friday morning was dry and beautiful. Of course I spent the night in the luxurious downstairs bedroom at the Grubin house in Arrowhead. It was quite a contrast from sleeping on the hard surface in the back of my Santa Fe on Wednesday night.

Todd needed to attend a meeting on Friday morning, and the fishing before 11AM was marginal on recent outings, so I decided to stay at the house, eat breakfast, prepare lunch, and update my stream notes from Thursday. This proved to be a great plan, and I was anxious to hit the water when Todd arrived at around 9:30AM. We discussed options, and fairly quickly settled on the public water that begins at Miller Ranch Road and continues upstream across from the Arrowhead water that we fished on Thursday.

We drove both cars to a parking lot at a school just across the Miller Branch Bridge where we assembled our rods and began hiking along the gravel path that follows the river. We didn’t go very far before I scrambled down the bank and prepared to fish. The size 16 gray caddis from the previous evening was still attached to my line, so I decided to shoot a few casts upstream close to the bank, but on my first backcast I hooked a branch that was behind me. What a way to start a new day of fishing! I was skeptical that I could retrieve the fly, but I found a tall rounded boulder and perched on top of it and managed to pull the limb down to a point where I could unwrap the line and save the caddis fly.

As I was doing this, Todd reappeared on the path above me and pointed out that another fisherman was fifty yards above us on the same side of the river. He was going to block our upstream movement, and there was a chance he had just covered the water that I was entering. We decided to change our plan and walked across the bridge to the south side of the Eagle River and began fishing upstream. Once again this was Arrowhead water, but Todd was an Arrowhead resident, so we were legally able to fish on the south side of the river.

The flows had dropped to 450 cfs, and this is still high for wading, but we discovered that we could move around more than was possible on the previous day. I decided to forego the size 16 caddis and reconfigured my line with the yellow Charlie Boy hopper, beadhead hares ear, and bright green caddis. Once again Todd and I worked our way upstream and alternated stretches of water.

I discovered that the fishing was much slower than Thursday as I landed only three fish between 10:30 and 1:30PM. I did suffer some missed opportunities with several momentary hook ups, but the fishing was clearly more challenging than my recent experience. One of my landed fish was another nice 15 inch brown, and a small rainbow and brown represented the rest of my catch, and all the fish fell for the bright green caddis. 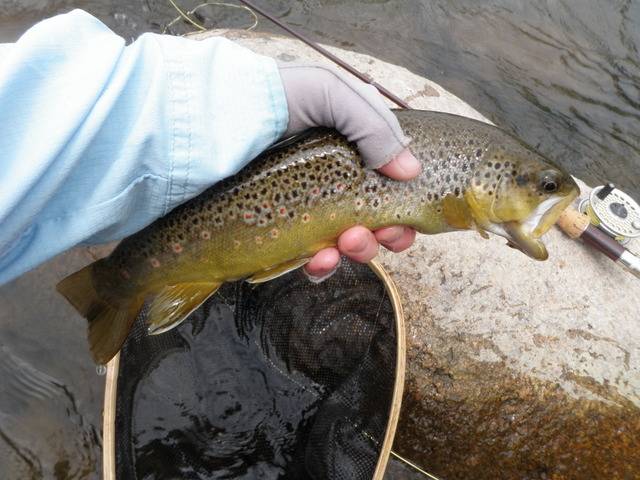 Meanwhile Todd was doing quite well with the bright green caddis pupa that I gave him. It was surprisingly cloudy and cool during the morning despite a five day forecast of high temperatures. In fact, cloudy overcast conditions generally indicate excellent fishing, and I began to wonder why that wasn’t the case on this Friday.

At 1:30PM Todd needed to return to his house to walk Quincy, and he used this as an opportunity to move his car from Miller Ranch Road to the same spot where we parked on Thursday. The sun came out around noon and warmed the air considerably, but after Todd departed some large clouds floated overhead and blocked the sun for long periods. Whether it was the cloud cover or the warming water temperature, by 1:30 pale morning duns made an appearance. The number of visible adults remained fairly sparse over the next hour, but I did notice a few surface rises at around 2 o’clock for a ten minute period. 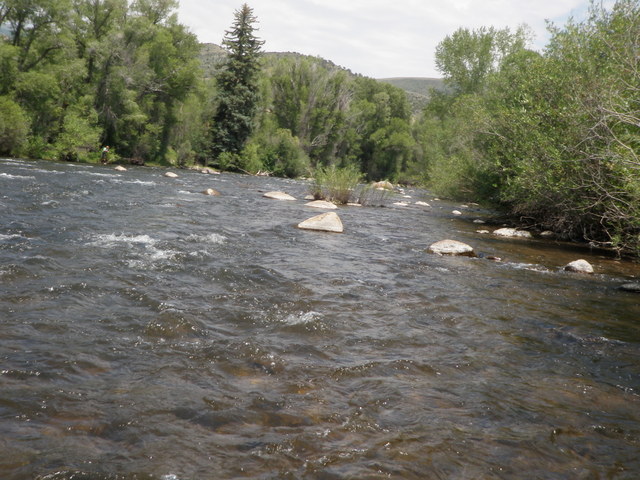 Despite the lack of surface activity, the fishing improved dramatically. I exchanged the Charlie Boy for a Chernobyl ant and kept the salvation nymph as my top subsurface pattern, but replaced the caddis pupa with a beadhead hares ear as the bottom fly. The Chernobyl ant and beadhead hares ear produced nicely on Thursday afternoon, and I hoped they would perform again on Friday.

As the sparse emergence commenced, I pressed on with the nymphs and all of a sudden they became a hot commodity. I prospected runs and riffles that passed over moderate depth, and fish seemingly emerged from nowhere to grab one of the nymphs. I also experienced the phenomenon of fish smacking the nymph as soon as it entered the water, and this reaction always surprises me. Particularly productive were the tails of runs in front of large rocks, as fish grabbed one of the nymphs as I lifted to make another cast. I was tempted to switch to a cinnamon comparadun when I spotted a few rises, but thought better of it and pressed on with the nymphs.

During this period I noticed that the salvation nymph was producing more than the hares ear, so I switched their positions, but this occurred near the end of the hatch. Between 1:30 and 2:30 I landed ten fish and five were in the 8-10 inch size range. Another four were around 12 inches in length, and one particularly memorable fish was fifteen inches or greater. I spotted this fish shifting back and forth grabbing food from the current above and to the right of a large submerged rock. I cast above its position, and my offering was ignored on the first drift. On the second drift, I thought the Chernobyl was beyond the trout’s position, but then I saw the fish make a quick move to the side, so I set the hook. Either the fish had changed locations, or it drifted back under the nymphs and took the salvation when it appeared to be escaping. At any rate it was a great visual snapshot, and I achieved closure by battling the fish to my net.

The hatch had almost ended when I lost the salvation nymph in the process of releasing a fish, so I replaced it with a beadhead pheasant tail to preserve my diminishing supply of salvations. I continued working my way upstream and covered a lot of territory as I prospected with the Chernobyl, hares ear and pheasant tail. It was amazing how attractive water that produced fish as expected a few minutes ago, suddenly seemed to be barren of fish. As it was later in the afternoon, I noticed that I was casting a long shadow upstream ahead of me, so perhaps this was affecting my success rate. 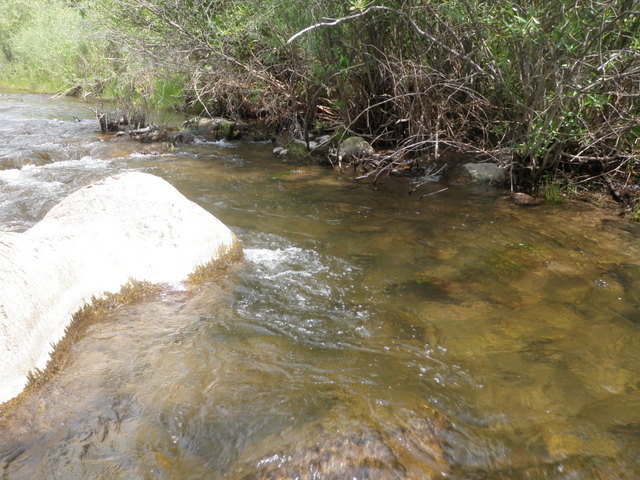 15 Inch Brown Came from Run Between Rock and Bank

I was beginning to despair of catching more fish when I reached a large protruding boulder with a small but fairly deep run between the boulder and the bank. The boulder offered me the opportunity to hide and thus prevent my shadow from overlapping the upstream area that I planned to fish. I shot a cast to the run on the other side of the boulder a couple times with no reaction, so I decided to cast further upstream beyond the boulder, and this did the trick. A fifteen inch brown emerged from nowhere and snatched the pheasant tail thus providing me with another highlight on the day.

Finally I reached the huge deep pool where we ended on Thursday, and Todd had returned to the river. I tried my flies in the head section where I hooked and landed the 15 inch rainbow the previous day, but only felt a momentary hook up with a 12 inch rainbow. I decided to explore the next sweet spot above the white water that spilled into the huge pool while Todd converted to an indicator and nymphs to get deeper.

As I approached a nice deep run I spotted a very large brown in a small depression in front of a cylindrical moss-colored rock at the very end of the pool.. Twice the fish reacted to the lift of my flies, but then it darted toward shore as it was apparently spooked by my shadow. Just as the large brown escaped, I saw a rise four feet above the depression in some riffly water so I shot a cast to that area. On the second drift I saw a small swirl, and reacted with a swift hook set. I felt the weight of a nice brown for an instant and actually saw the entire fish as it jumped from the water at the moment of the hook set. Unfortunately the hook came flying free as it appeared that the fish took the Chernobyl ant and spit it out while in midair.

With these two disappointments under my belt, I waded upstream along the bank a bit further until I saw a marginal run that split exposed rocks on both sides. The water was fairly shallow at this location, but did probably reach a depth of three feet in the center. I decided to allocate a few casts to the area, but I didn’t see any fish with my polarized lenses, so I was fairly certain that the casts would be fruitless. Again I was shocked when on the third drift a brown materialized out of nowhere and grabbed the pheasant tail as it tumbled by. I landed a 14 inch brown trout for my last fish of the day. 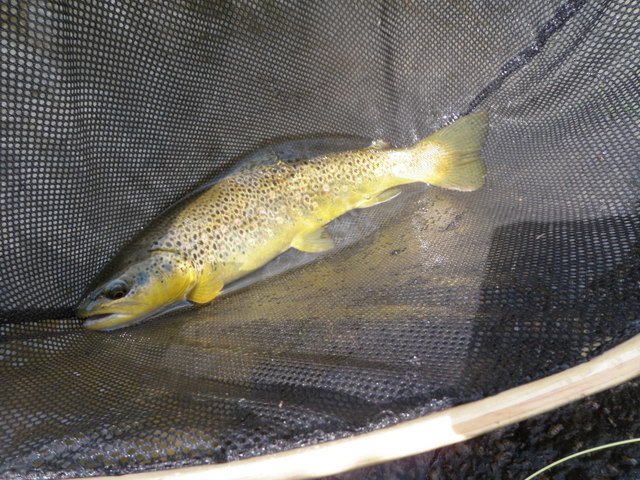 Another Fine Brown Deep in the Net

At 1:30 I was willing to accept a poor day of fishing, but rationalized it as an offset to my spectacular Thursday. By 4 o’clock I landed fifteen fish including four brown trout that were measured in the fifteen inch range. Friday was a late bloomer and eventually equaled most of my other days on the Eagle River. Todd drove me back to my car, and I removed my waders and stashed my fishing gear and returned to Denver. The weather difficulties of Wednesday evening were fading memories replaced by visions of hungry trout grabbing my flies as they drifted by. 2014 has restored my faith in the Eagle River and elevated it to a top destination for future trips.