Location: Between Wolcott and Eagle.

Jane reserved a condominium in Eagle-Vail for the Fourth of July weekend, and we arrived at our temporary lodging on Wednesday, July 1.  The original plan incorporated a full day guided float trip on Thursday, July 2, 2020; but my fishing partner suffered a setback in his recovery from shoulder surgery, so we delayed that highly anticipated outing. This circumstance produced a large hole in my calendar for Thursday, so I took advantage with a wading trip to the Eagle River. My most recent visit to the Eagle River was June 23, 2020, when the flows hovered between 1,100 and 1,000 CFS. I followed the DWR charts with keen interest, and I was pleased to see a trend line that depicted a steady descent to the 600 CFS range. I anticipated a river that remained high enough to push the fish to the edges, and from previous years I knew that dense hatches of caddis, pale morning duns and yellow sallies could be expected. In short, I was pumped for some outstanding fly fishing on the Eagle River. 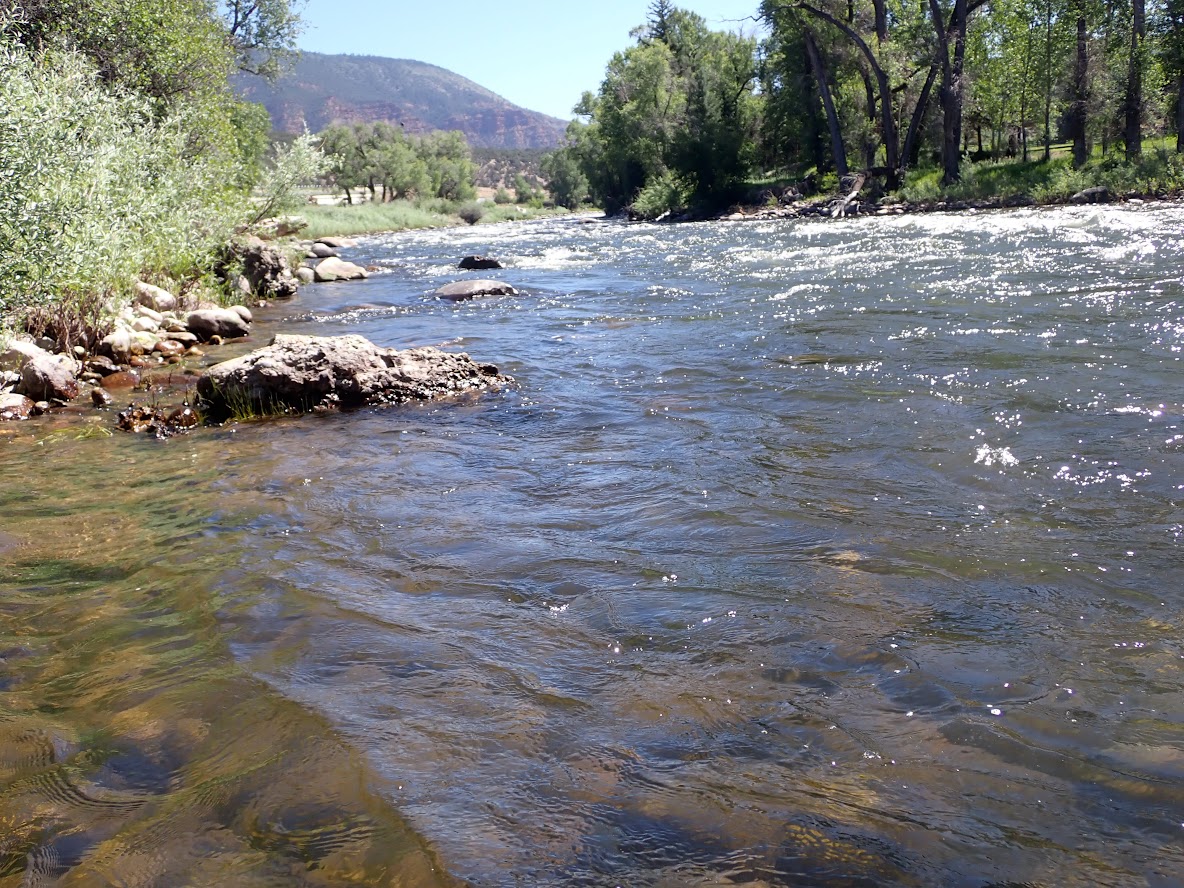 Cannot Wait to Probe This Area 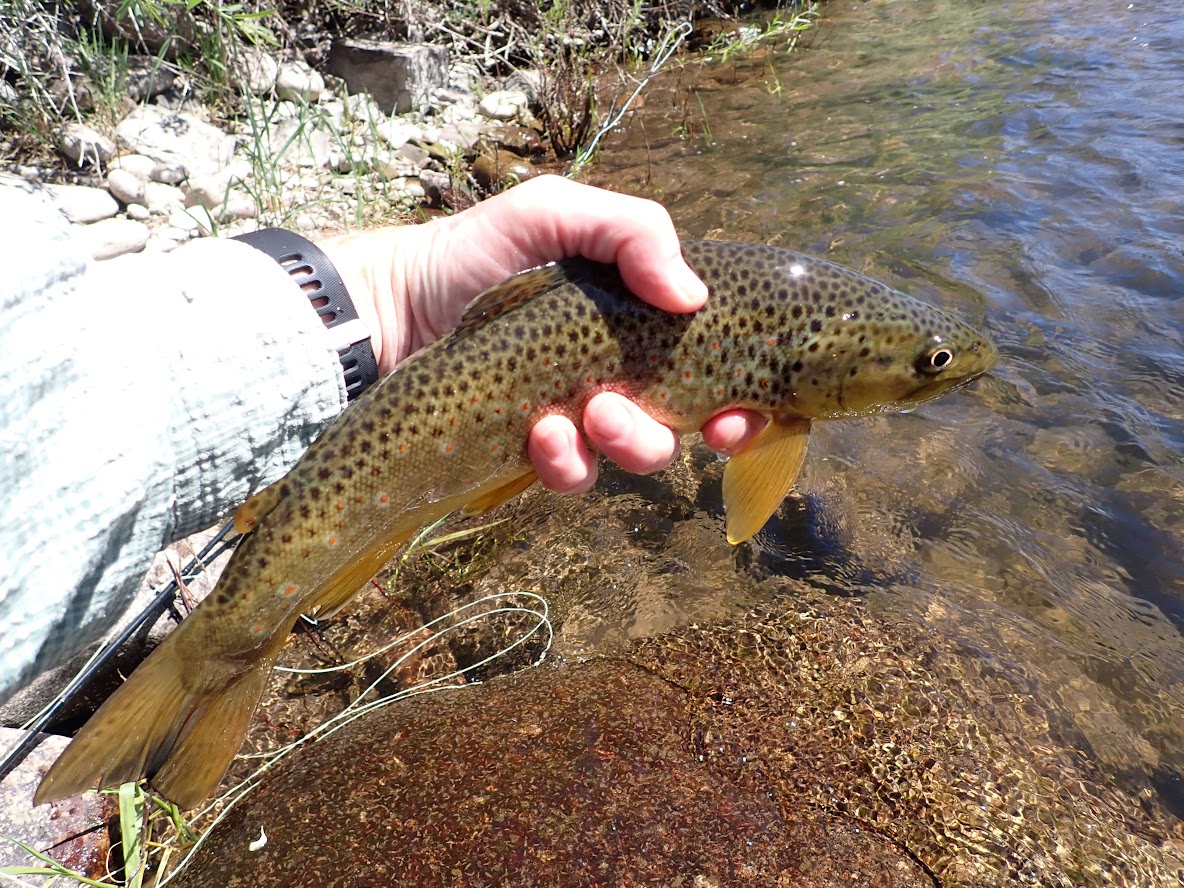 Number One on July 2

The high temperature spiked at a warm eighty degrees on Thursday, and the flows were indeed in the 600 CFS range. More cloud cover would have been welcome, but conditions were mostly conducive to a fun day of fishing. I arrived at one of my favorite roadside pullouts by 10:00AM, and after I assembled my Sage One five weight and jumped into my waders, I made the hike to the river. I began probing the probable fish holding spots with a size 8 yellow fat Albert, iron sally, and salvation nymph. These flies remained on my line for most of the day except for a period around lunch, when I replaced the salvation with an emerald caddis pupa and later with a hares ear nymph. The pupa and hares ear each produced one fish, however, when I spotted an increased quantity of pale morning duns in the afternoon, I reverted to the salvation nymph. Other than the caddis pupa and hares ear eaters, the iron sally accounted for sixty percent of my landed trout with the salvation responsible for the remainder. 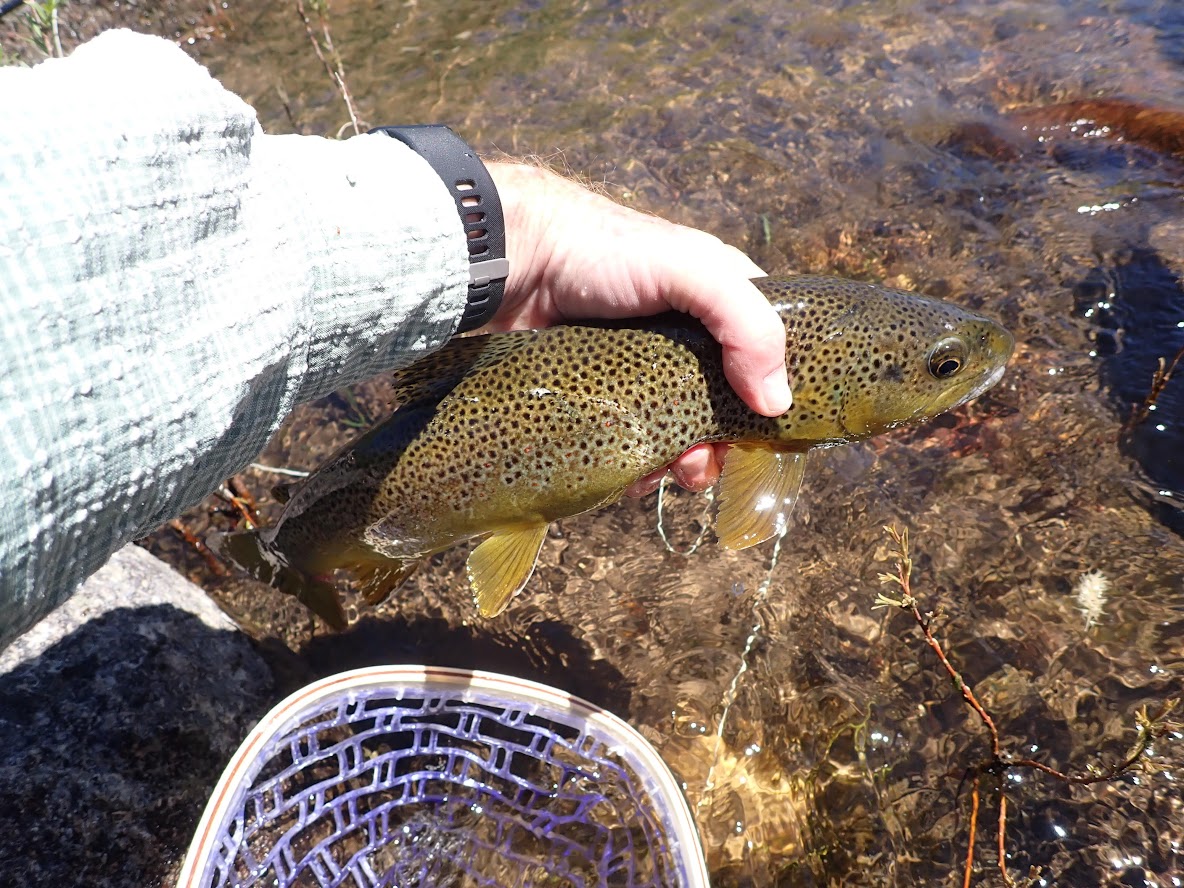 Between 10:30AM and 11:45AM, when I paused for lunch, I landed four robust trout. Two were fine brown trout in the thirteen inch range, and the other two were rainbows. The iron sally fooled the first three, and number four was the victim of the emerald caddis pupa. 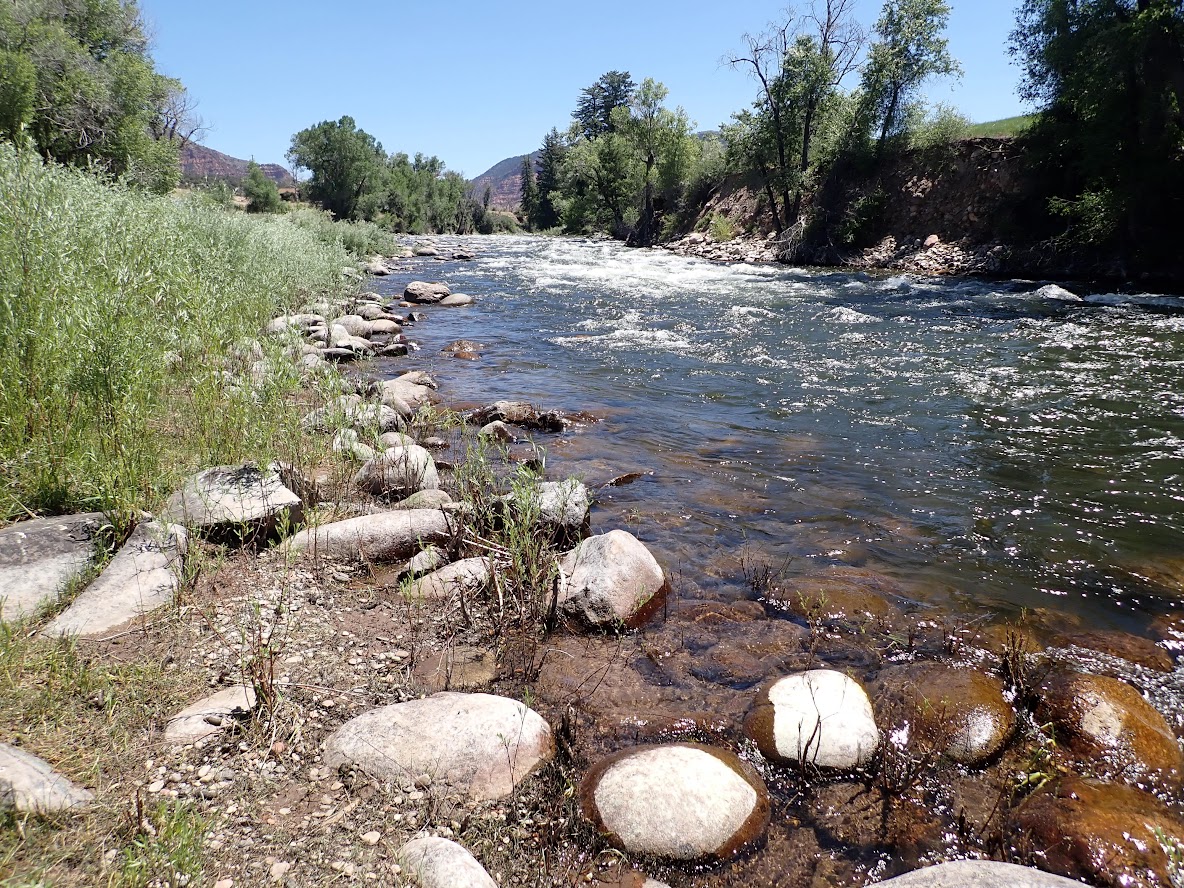 After lunch a blizzard hatch of yellow sallies commenced, but surprisingly I never observed surface rises. With the relatively high water and no rising activity I stuck with the iron sally, and it rewarded my confidence during the hatch, but it was not as effective as I anticipated given the abundance of stoneflies in the air. Caddis adults were prolific among the streamside bushes and willows, but the trout never expended the requisite energy to chase the erratic surface dippers. 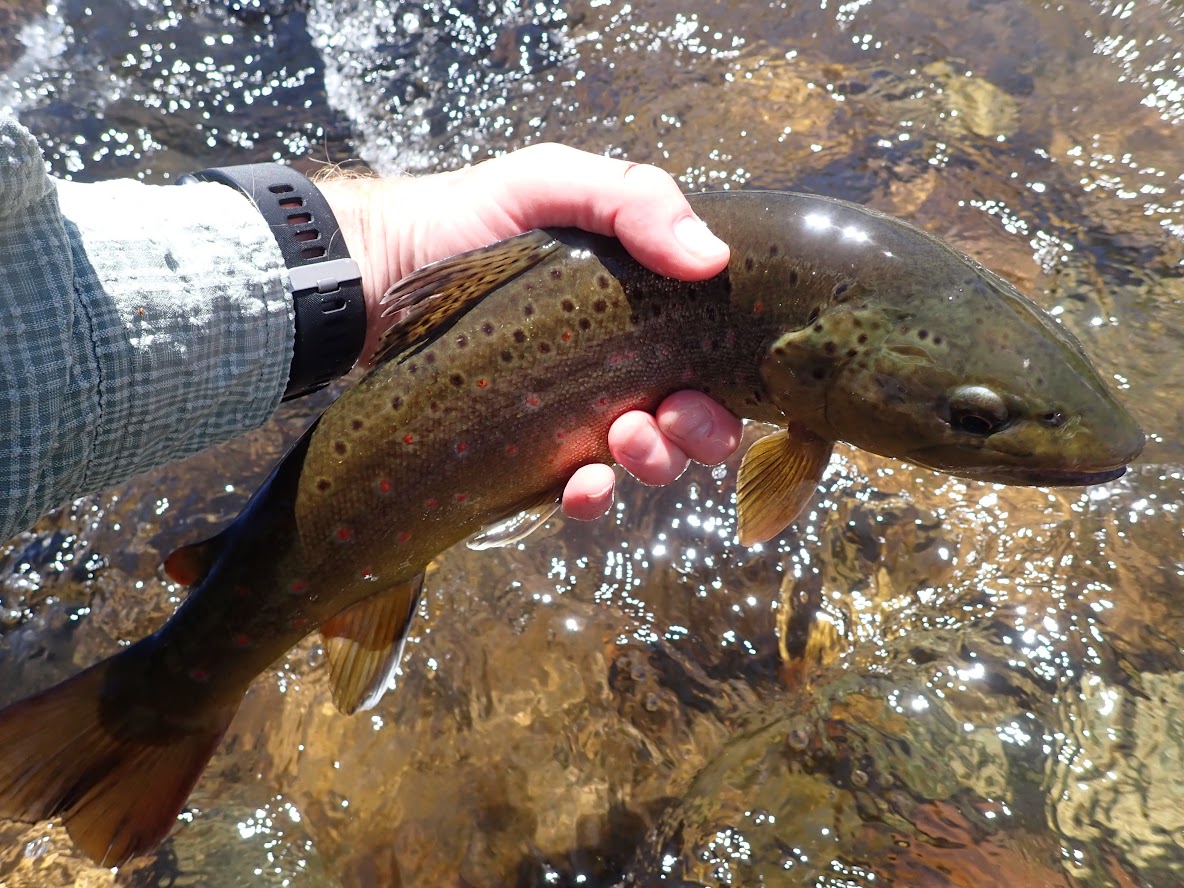 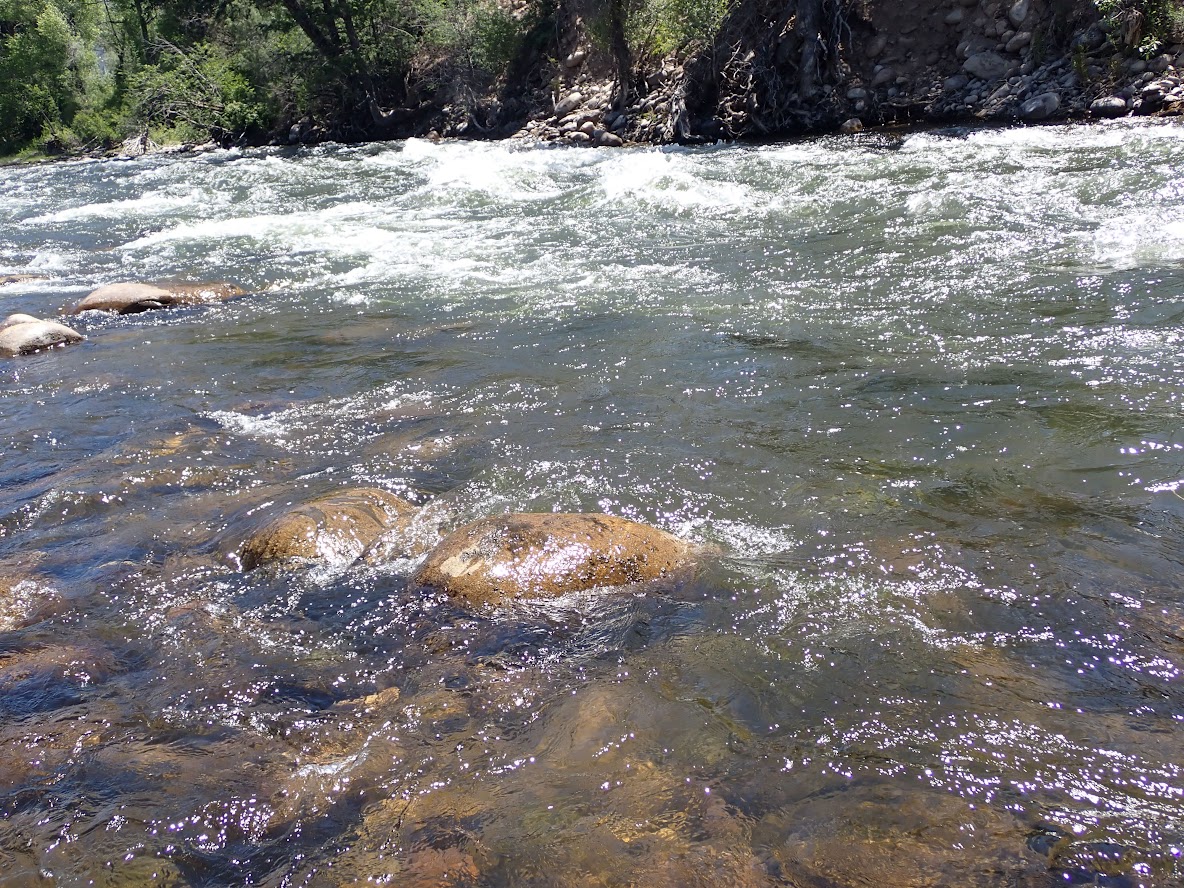 By the end of the day at 3:30PM the fish count climbed to thirteen. The afternoon fish were the best of the day from a size perspective. In fact, other than the rainbow that was fish number two on the day, all the Thursday trout were twelve inches or greater. My net was visited by a sixteen inch rainbow and a fifteen incher as well. Three brown trout stretched the tape to fourteen inches. There was no magic formula to catching fish on Thursday. I moved upstream at a steady pace and fished areas with slower velocity and moderate depth. Current seams were popular spots as were swirly water at the top of long deep runs and riffles. The pale morning duns never developed into a significant factor, and this was a disappointment, and the yellow sally emergence was heavy but brief, and it also did not provoke surface feeding. 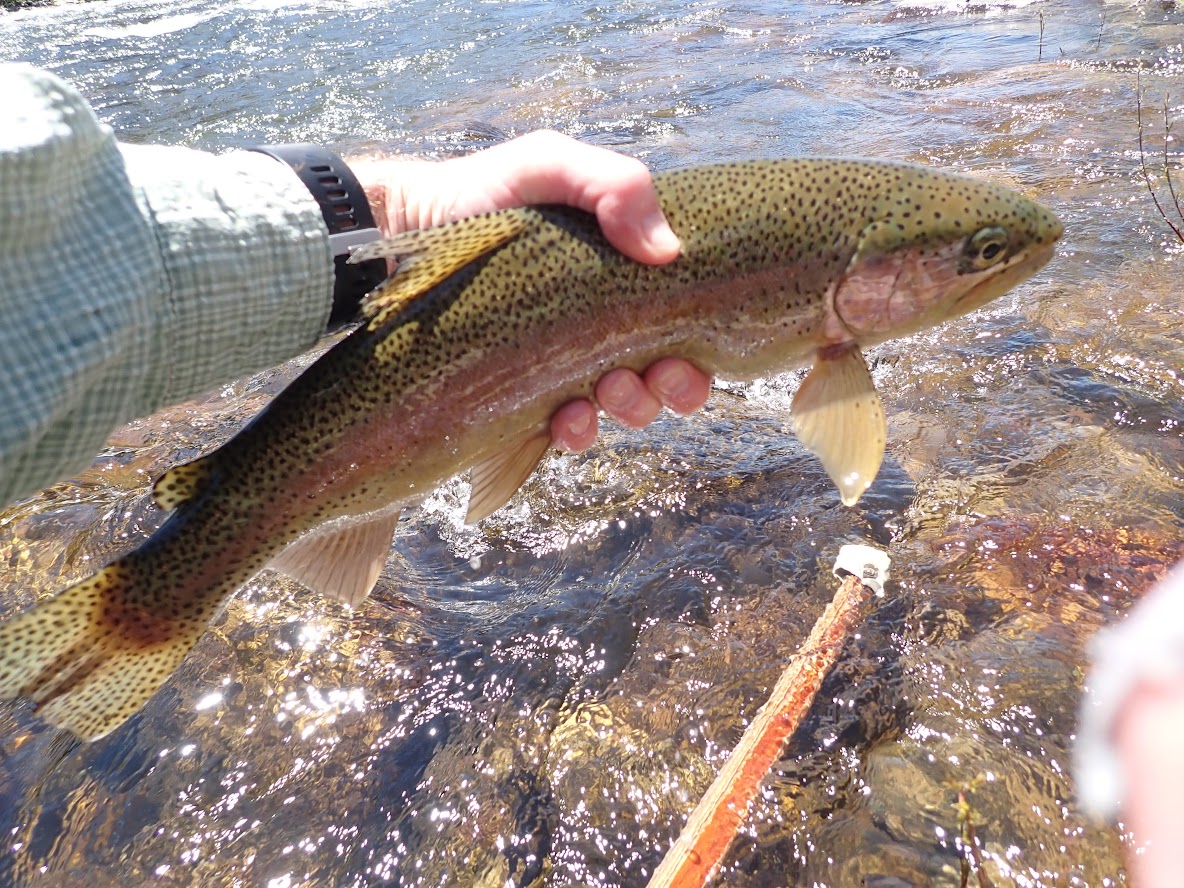 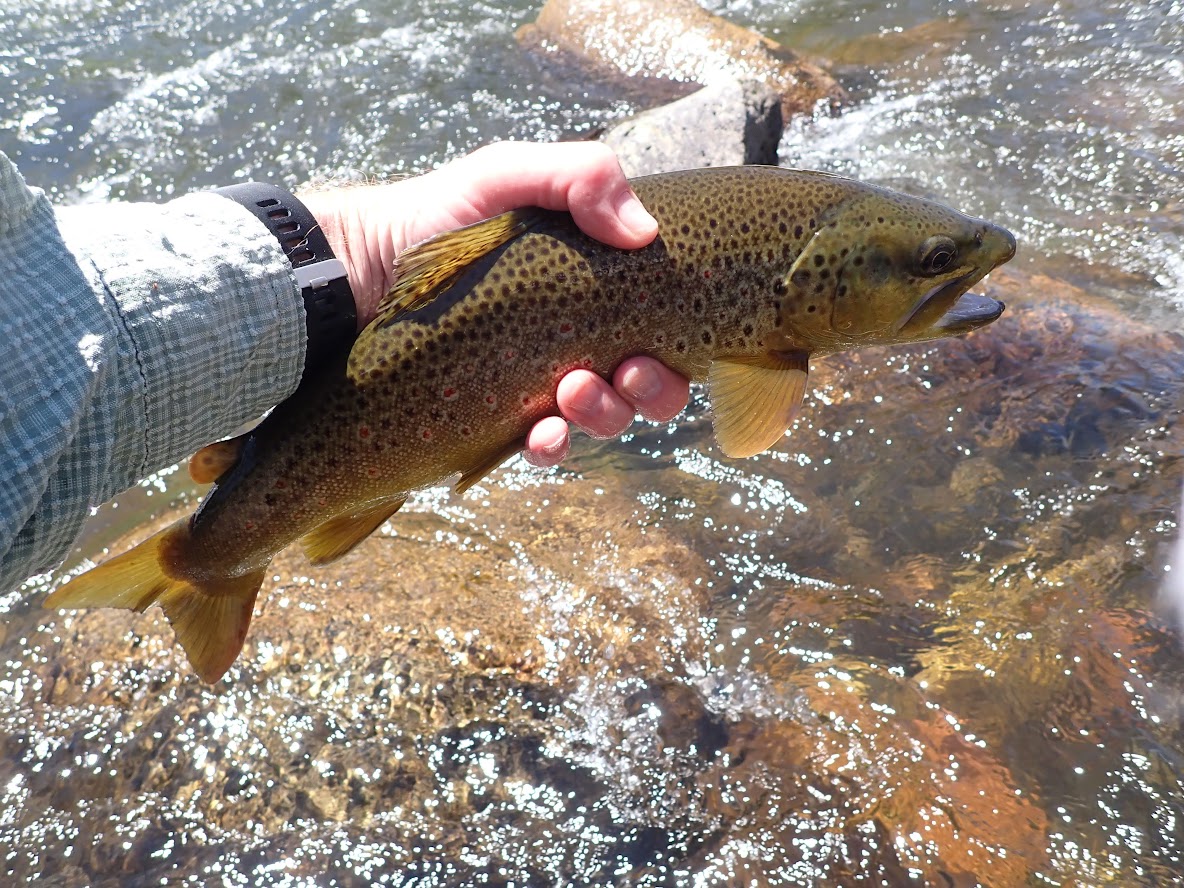 In summary, it was a pleasant and enjoyable day on the Eagle River. As flows drop, and the air temperature remains elevated in the eighties, the Eagle River’s productive days may be limited, so I was pleased to extract one more excellent outing from the popular Colorado River tributary. 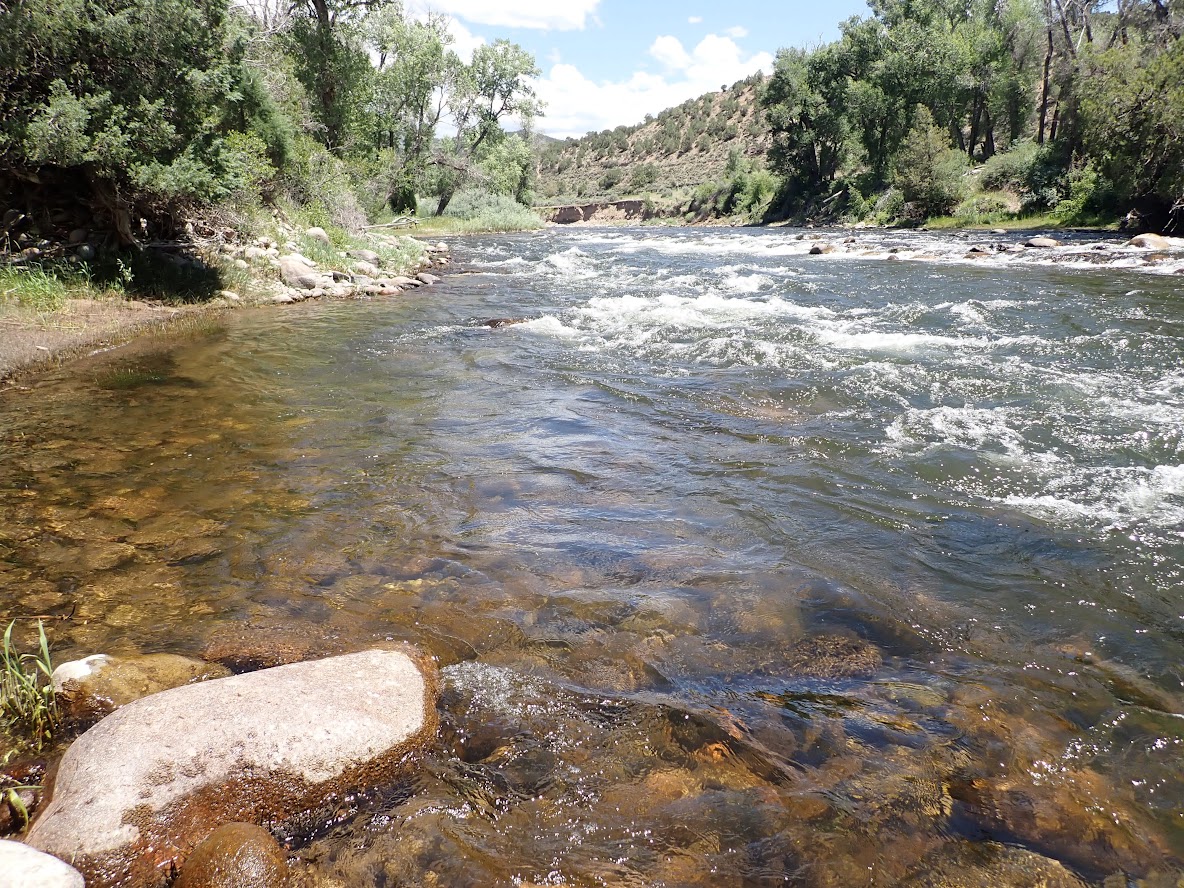