Flows were in the 1100 to 1000 CFS range on Tuesday and remained comparable to Monday. Tuesday also developed into a very nice day with abundant sunshine for much of my time on the water, and the high temperature surged into the middle eighties. For variety I decided to try a section of the Eagle River, that I had not fished in at least ten years. I quickly climbed into my waders and once again assembled my Sage One five weight and then ambled over the open grassy area, until I was on the bank of the rapidly flowing river. During the morning I fished a nymph rig that featured a slumpbuster and a 20 incher. I decided to go big and deep. The versatility provided by the slumpbuster enabled me to fish it dead drift similar to a nymph, or to strip and wiggle it like a streamer. These innovative (for me) approaches sounded great in theory, but they failed to deliver a trout to my net. After a decent trial period with no action I began to substitute new subsurface patterns including an ultra zug bug, emerald caddis pupa, bright green go2 caddis pupa, and a brown X leg nymph. None of these combinations provoked so much as a look.

Many years ago I fished this stretch of the Eagle River, and I remembered an extensive section of pocket water, where I experienced an abundant amount of success. I set a goal to seek this area again with the hope that it would salvage my day. The highlight that stood out in my memory was fishing a size 12 stonefly nymph with a peacock dubbed body and a mylar wing case in deep pockets along the left bank, and larger than normal brown trout surprisingly ravaged the large offering. Could I duplicate this experience on Tuesday? 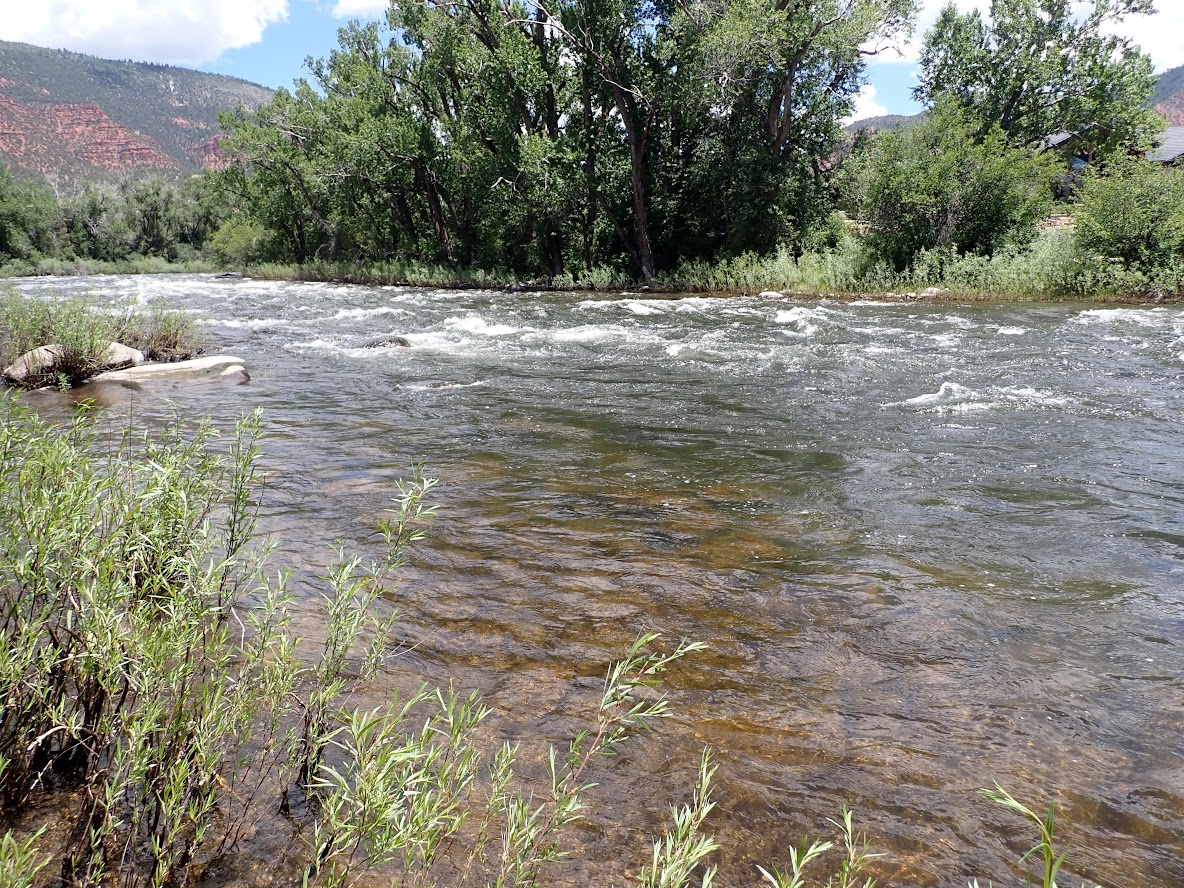 By noon I rounded a bend, and ahead of me was the sought after pocket water. At 1,000 CFS most of the pocket water was off limits except for the left edge, but this was the area that I targeted. The nymph set up was proven futile, so I removed the indicator and split shot, and knotted a size 8 Chernobyl ant to my line along with a brown X leg nymph and bright green go2 caddis pupa. I covered some nice riffles of moderate depth, and my slump continued, but then I arrived at a long slow moving shelf pool next to the fast current seam of the main channel of the river. I lobbed some casts, and as I followed my fly, I noted a pair of rises above me in the pool. I scanned the water for a food source, but I saw none. 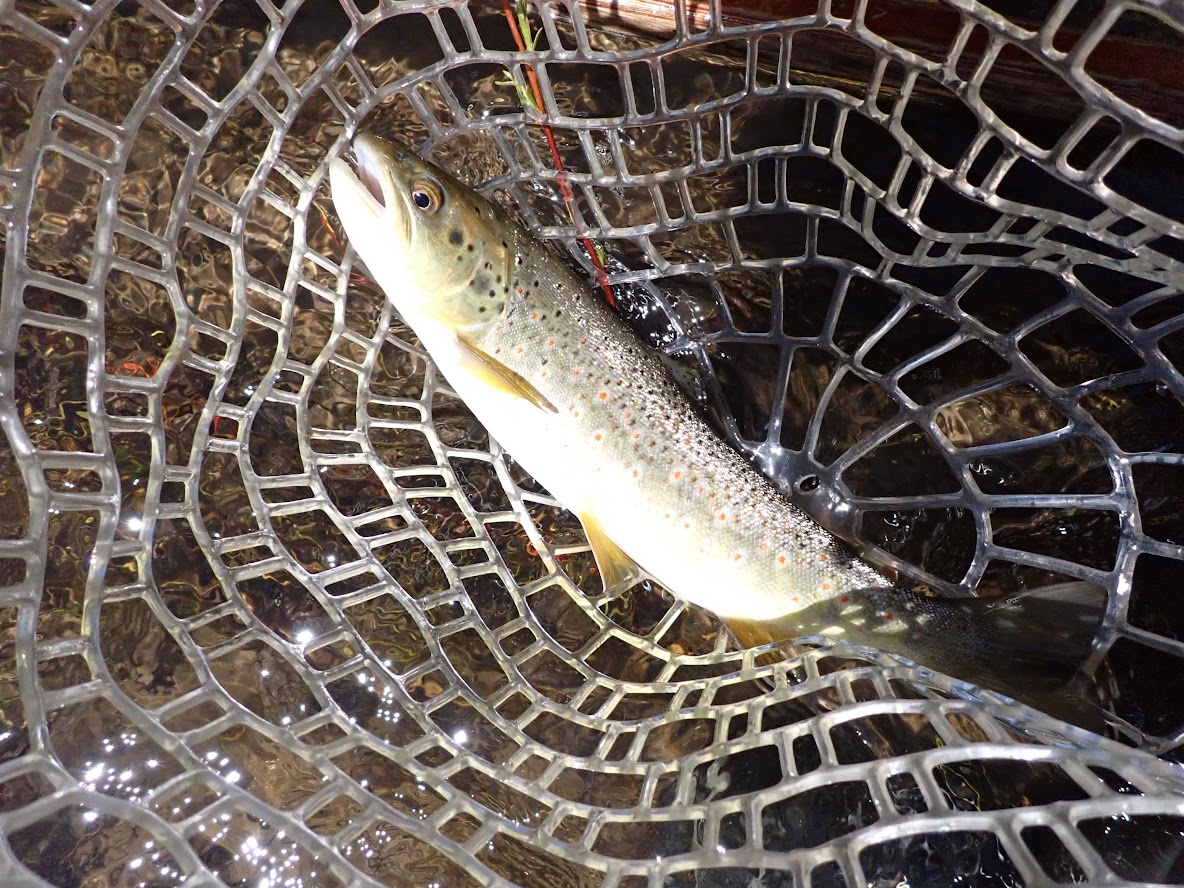 After a few more unproductive drifts I once again saw a rise in the lower third of the pool, and this time I spotted a fluttering caddis, as it disappeared in a swirl. While this scene transpired, I began observing some small size eighteen pale morning duns, but actually witnessing the demise of the caddis prompted me to tie a size sixteen gray caddis to my line followed by a size 16 juju emerger to cover my bases. The second cast to the area of the rise prompted a swirling take, and I netted a twelve inch brown for fish number one on the day.

I continued casting higher in the pool, and on one of the drifts a fish elevated but refused the caddis. I speculated that perhaps pale morning duns were also on the menu, so I converted to a size 18 cinnamon comparadun. I never duped the looker, but I fooled a decent rainbow to the left of an exposed rock at the top of the run. Unfortunately the stripe-sided fighter quickly escaped the grip of my hook. 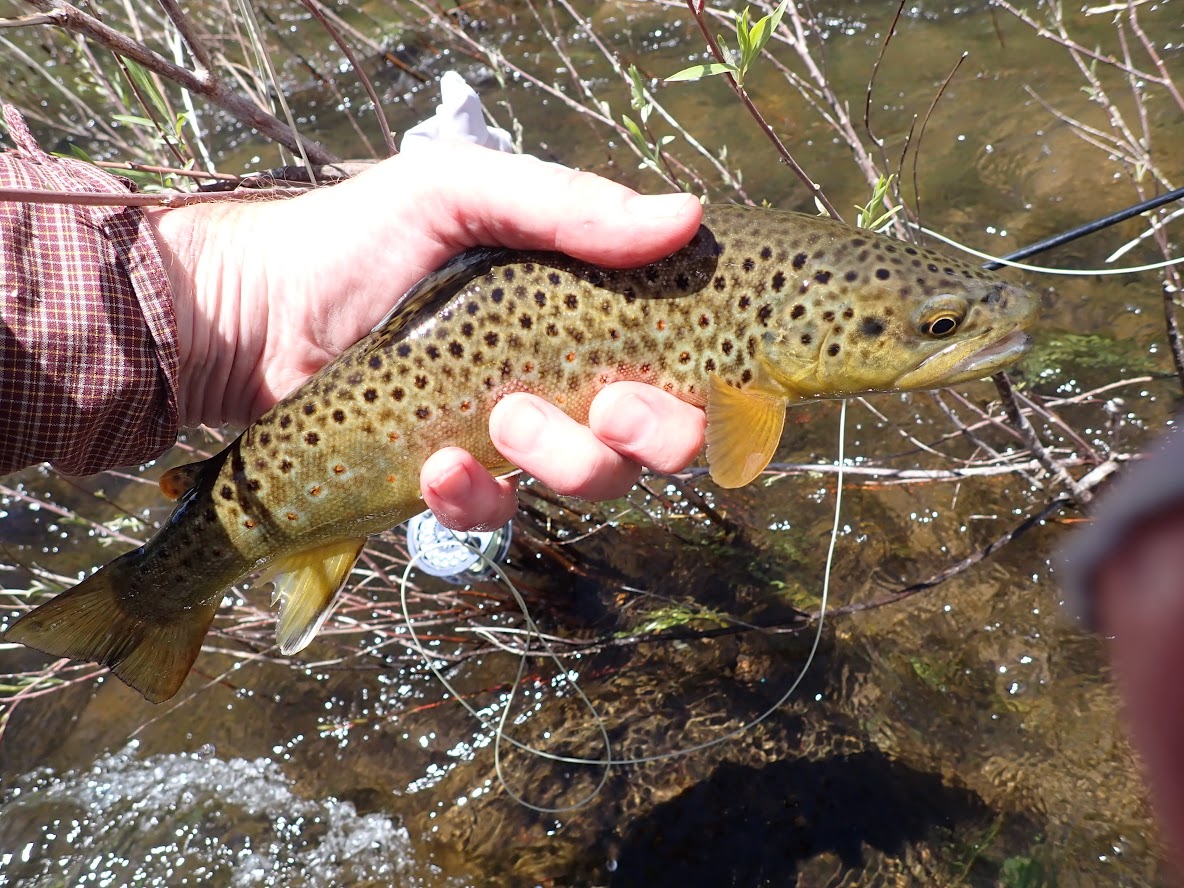 I progressed upstream, and in a marginal short run of moderate depth I netted a second twelve inch brown trout. It rose twice to naturals, before my imitation fooled the aggressive eater. After releasing number two, I continued along the left side of the pocket water, until I encountered a large green sign that proclaimed private property. I was unclear whether this was the end of the lease, but not willing to take any chances, I retreated. 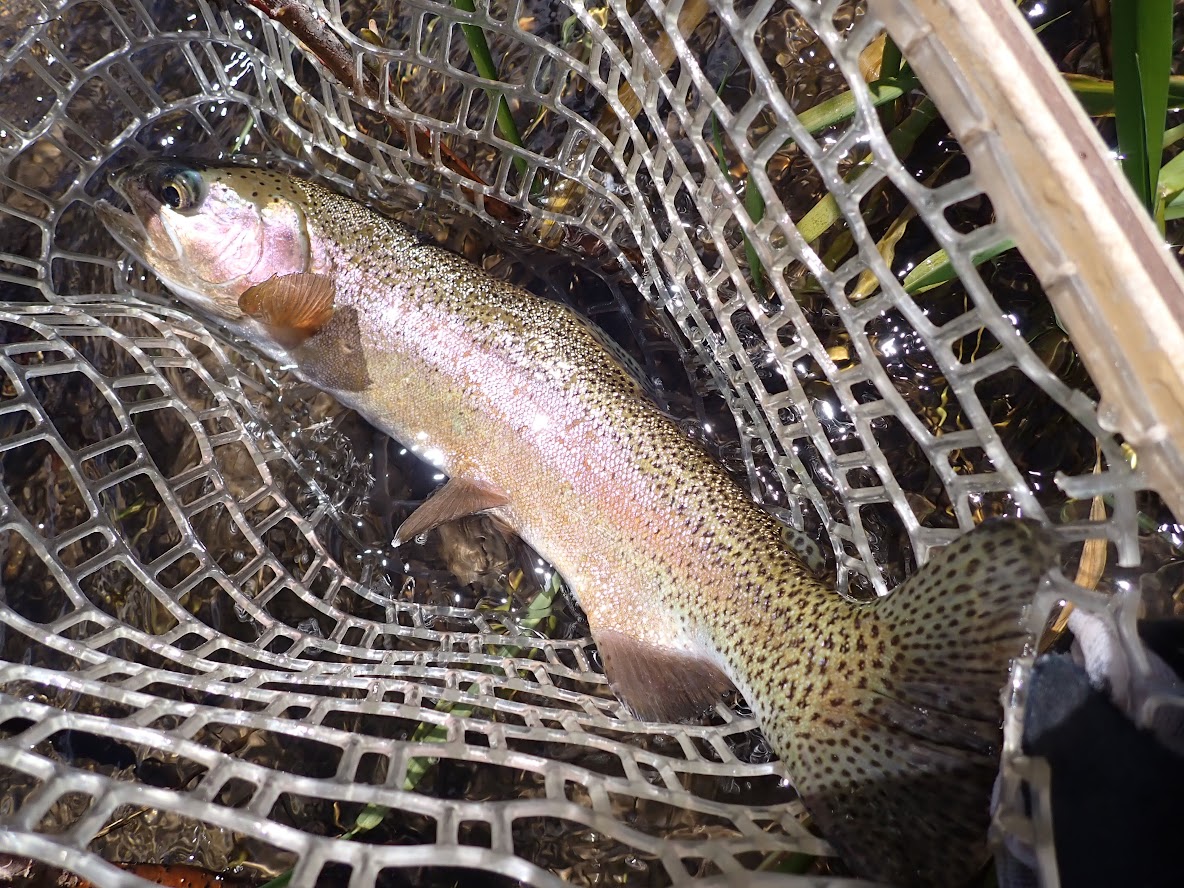 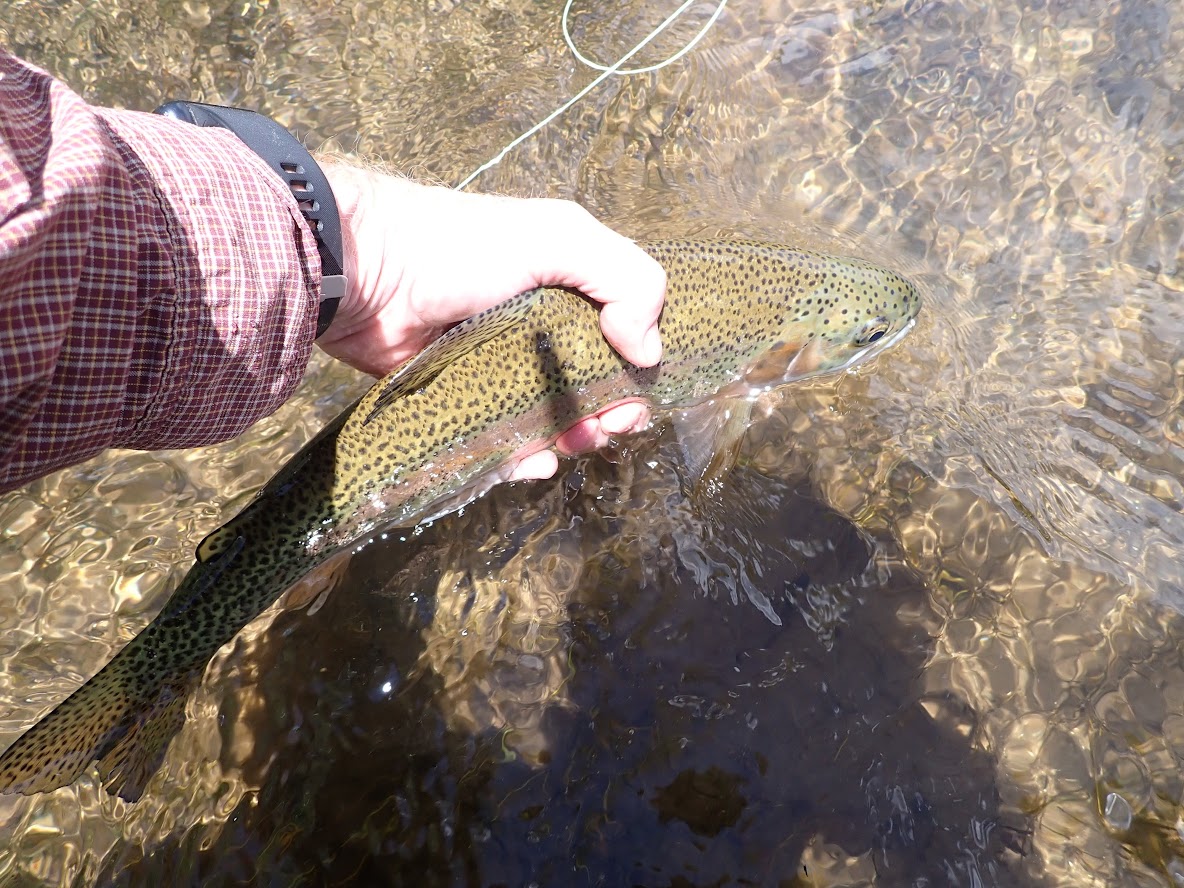 About to Glide Away

When I approached the shelf pool again, I circled wide to remain out of view and approached from the downstream side. Rising fish were no longer present, however, occasional pale morning duns made an appearance. I decided to go subsurface and configured my line with a tan ice dub chubby Chernobyl, an iron sally, and a size 16 super nova. The super nova was intended to imitate the nymph stage of the pale morning duns. The tactic paid off, as I landed two rainbows in the fifteen inch range on the nova. It required quite a few fruitless drifts, before the trout responded, but persistence paid off in a big way. A third fine rainbow crushed the super nova, as soon as it hit the water at the top of the pool, but it leaped and tossed aside my fly within a few seconds. 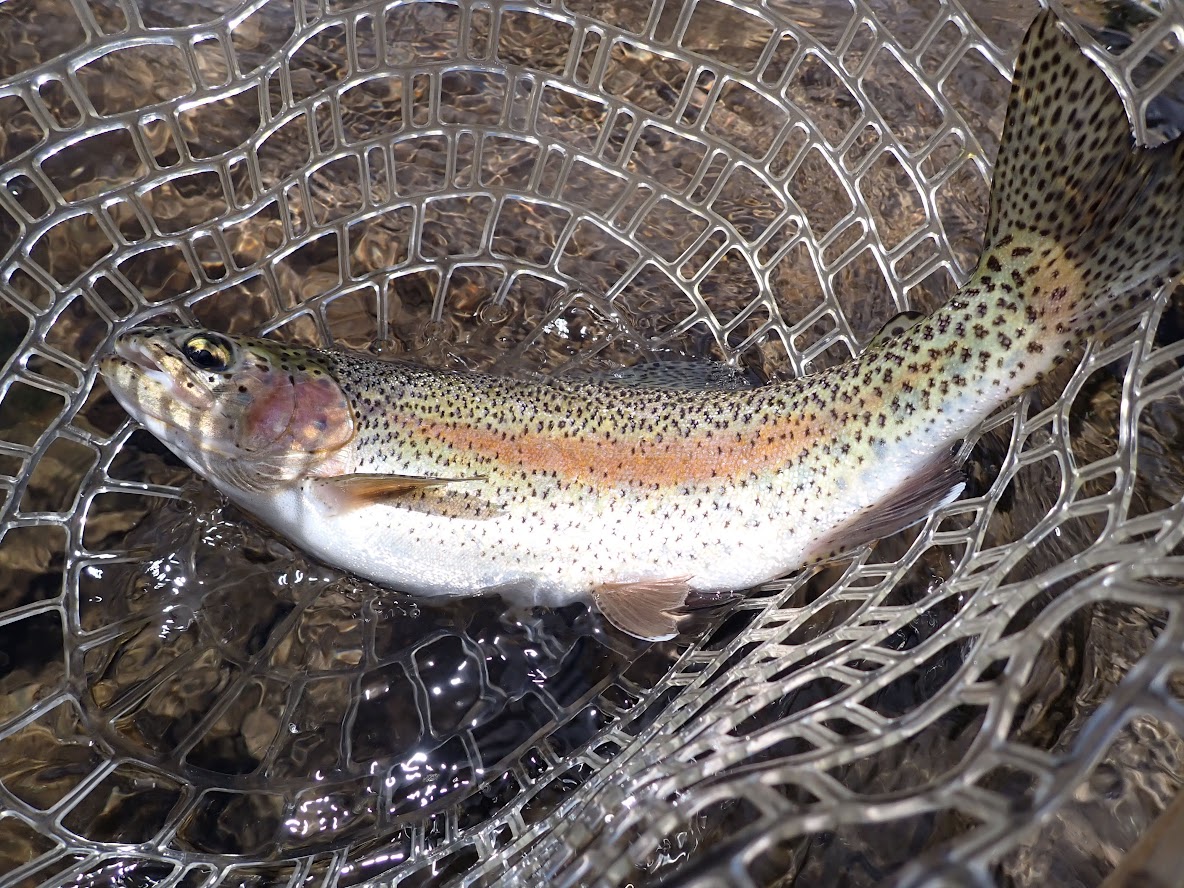 On my return hike to the car I stopped to prospect another quality shelf pool, and the return visit delivered a spunky thirteen inch rainbow. As I approached the car, I decided it was too early to quit, so I drove west to the last stile and hiked to the river above my ending point on Monday. I found a rock to eat my lunch, and then I spent thirty minutes prospecting two quality areas that delivered fish previously. Almost instantly a fish surprised me, as it crushed the chubby Chernobyl, but it escaped almost as quickly as it slammed the large foam attractor. The remainder of the time in this section was unproductive, and I called it quits at 2:40, so I could make the return trip in time for an anniversary dinner.

My catch rate on June 23 was subpar, but I rediscovered an area that impressed me in the past. I landed five quality trout and had a few opportunities for more. Two fifteen inch rainbows were a bonus, and I also parlayed a dry fly into two netted browns. Hopefully the river remains in decent shape for when the pale morning dun and yellow sally hatches intensify.