As I followed the rapid decline in flows on the Yampa River, I kept my eyes on the Eagle River as well. Fortunately the Eagle was lagging, and this enabled me to complete a two day fishing/camping trip to the Yampa on June 15 – 17, and I was very pleased with the results. Now I turned my attention to the Eagle, as it subsided fairly rapidly. I reviewed the Eagle River flow data on the DWR web site, and the graph clearly indicated that my target flows of 1,000 would be reached by Monday, June 22. This was all I needed to prompt preparation for a quick two days of fishing and one night of camping. 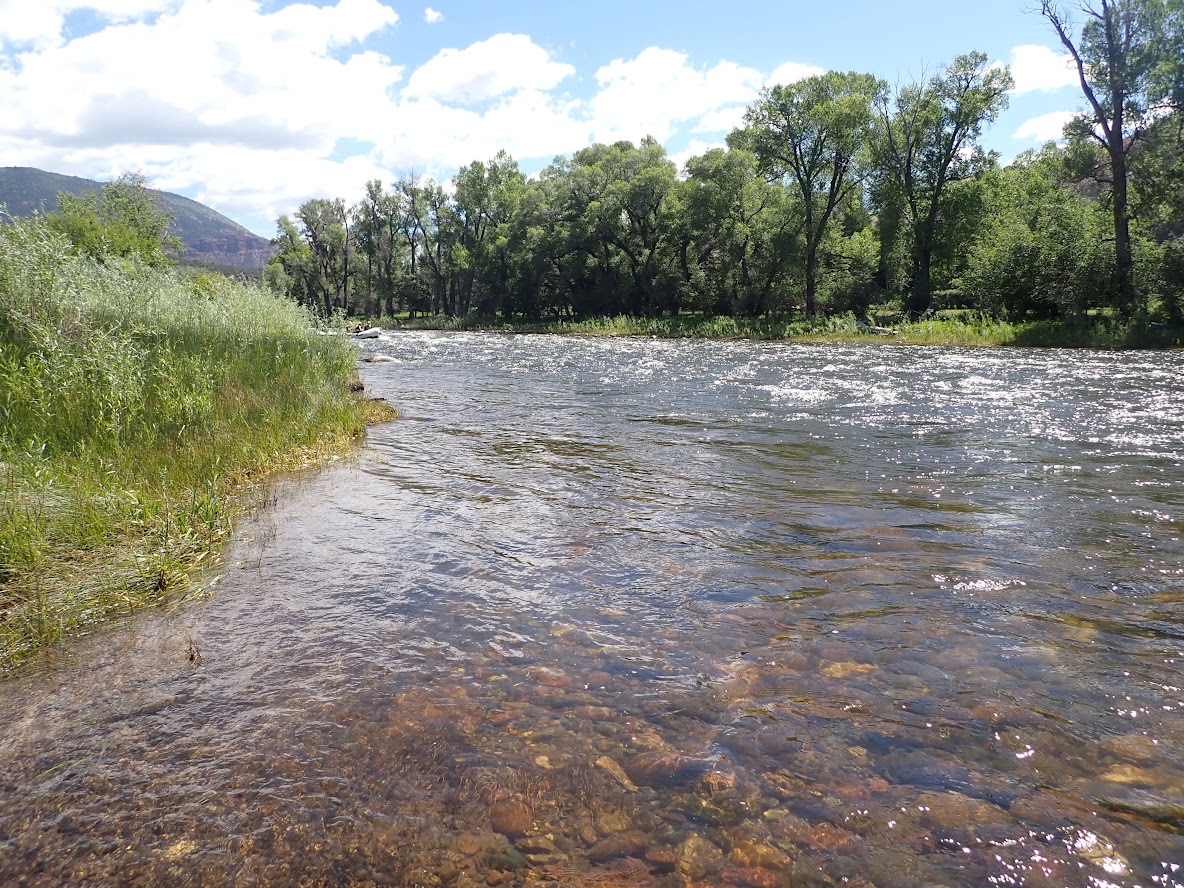 I arrived at the pullout next to my favorite access point by 10:30AM, and after I assembled my Sage One five weight and climbed into my waders, I was on my way to the edge of the river. The flows were, indeed, in the 1000 – 1100 CFS range on Monday, and these were the exact conditions, that I seek annually in the early summer season on the Eagle. The air temperature was warm and would eventually reach the eighty degree level, however, lots of cloud cover in the afternoon created a degree of comfort. During my day on the river I spotted a fair number of caddis and two yellow sallies, so the insect activity was less intense than years where the 1,000 CFS level of flows coincided with late June and early July. 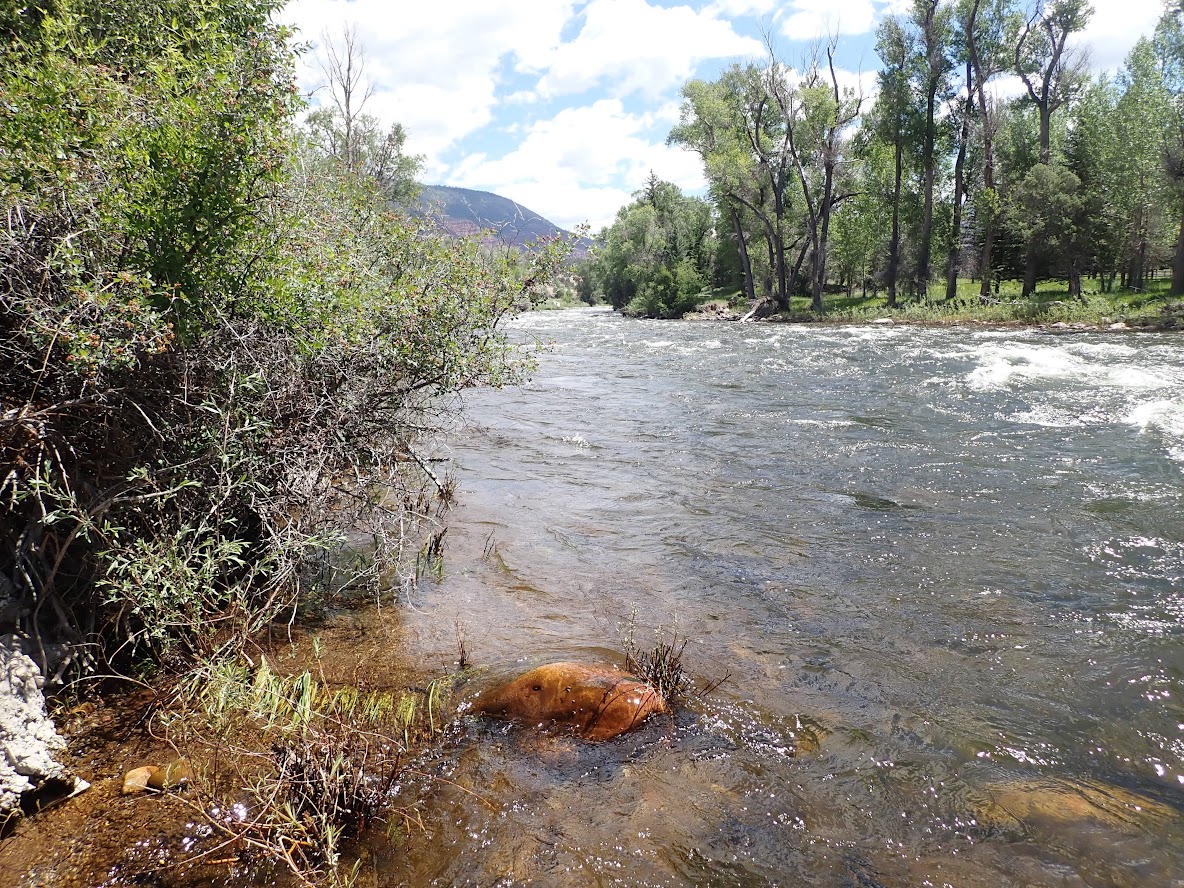 I began my fly fishing adventure by eleven o’clock with a fat Albert, iron sally, and salvation nymph. The iron sally represented the nymph of the yellow sally stonefly, and the salvation mimicked the nymph of the pale morning dun. As the day evolved, I discovered that a single consistently productive fly was not in the playbook, and this probably resulted from the lack of a concentrated hatch. The fat Albert remained on my line throughout the day as a visible indicator, but the iron sally got replaced by a 20 incher (2). For the point fly I cycled through a salvation nymph (3), ultra zug bug (1), bright green go2 caddis pupa (3), emerald caddis pupa (2), perdigon, and hares ear nymph (1). The numbers in parenthesis indicate how many landed fish each accounted for. 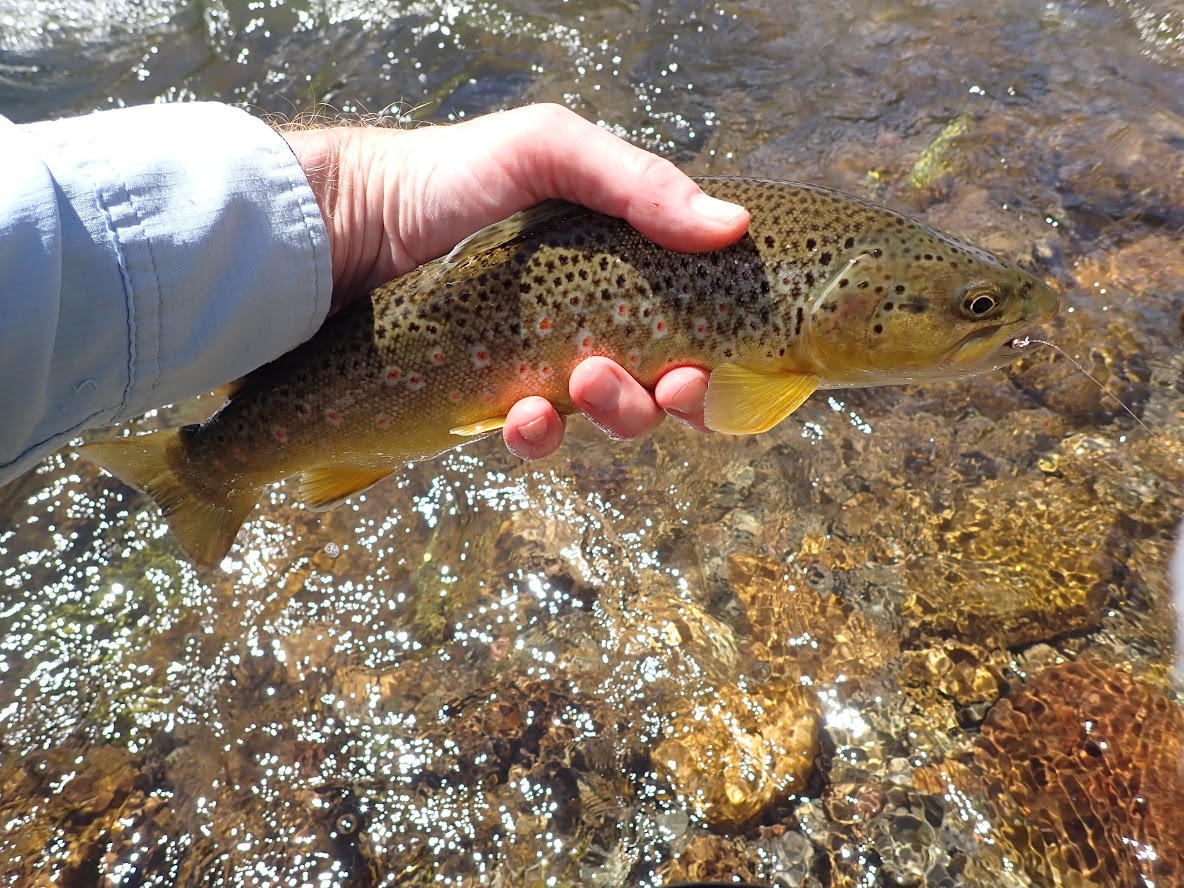 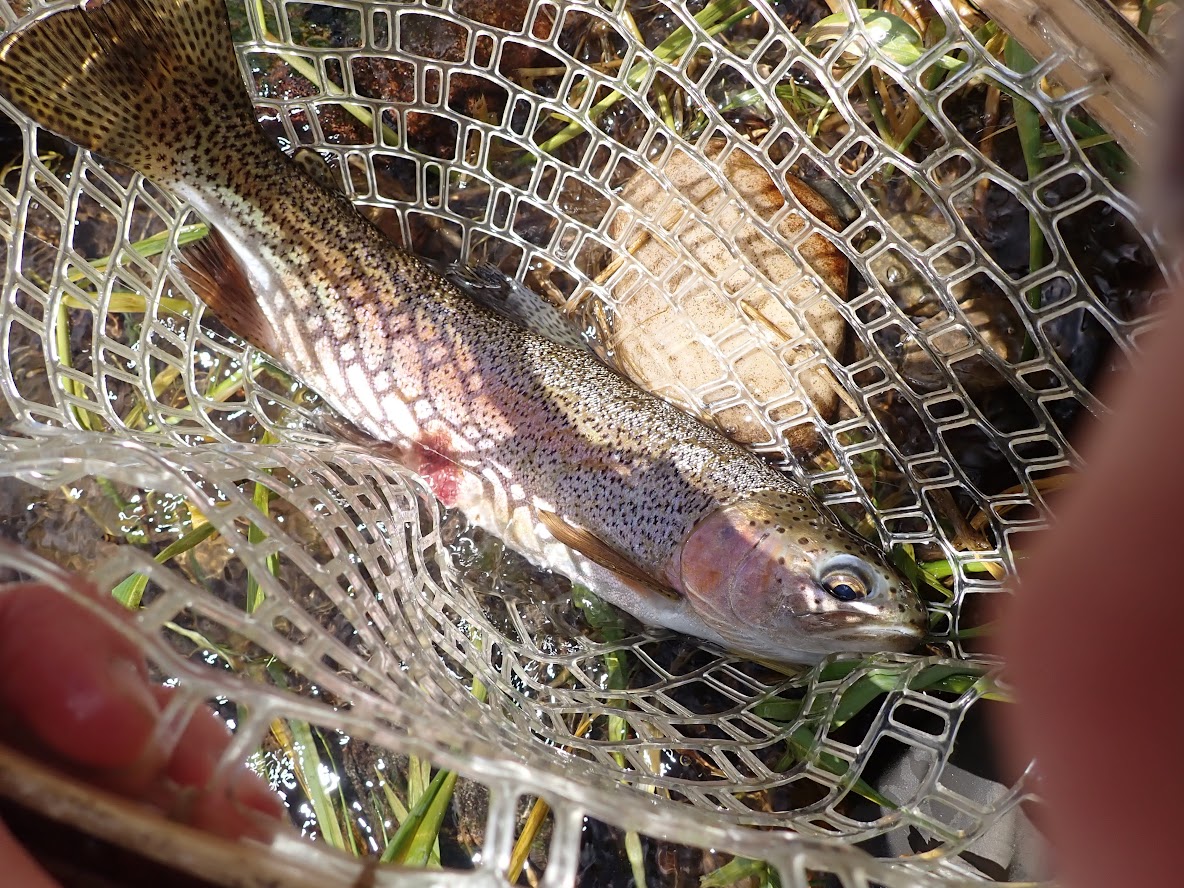 Red Belly Splotch on This Beauty 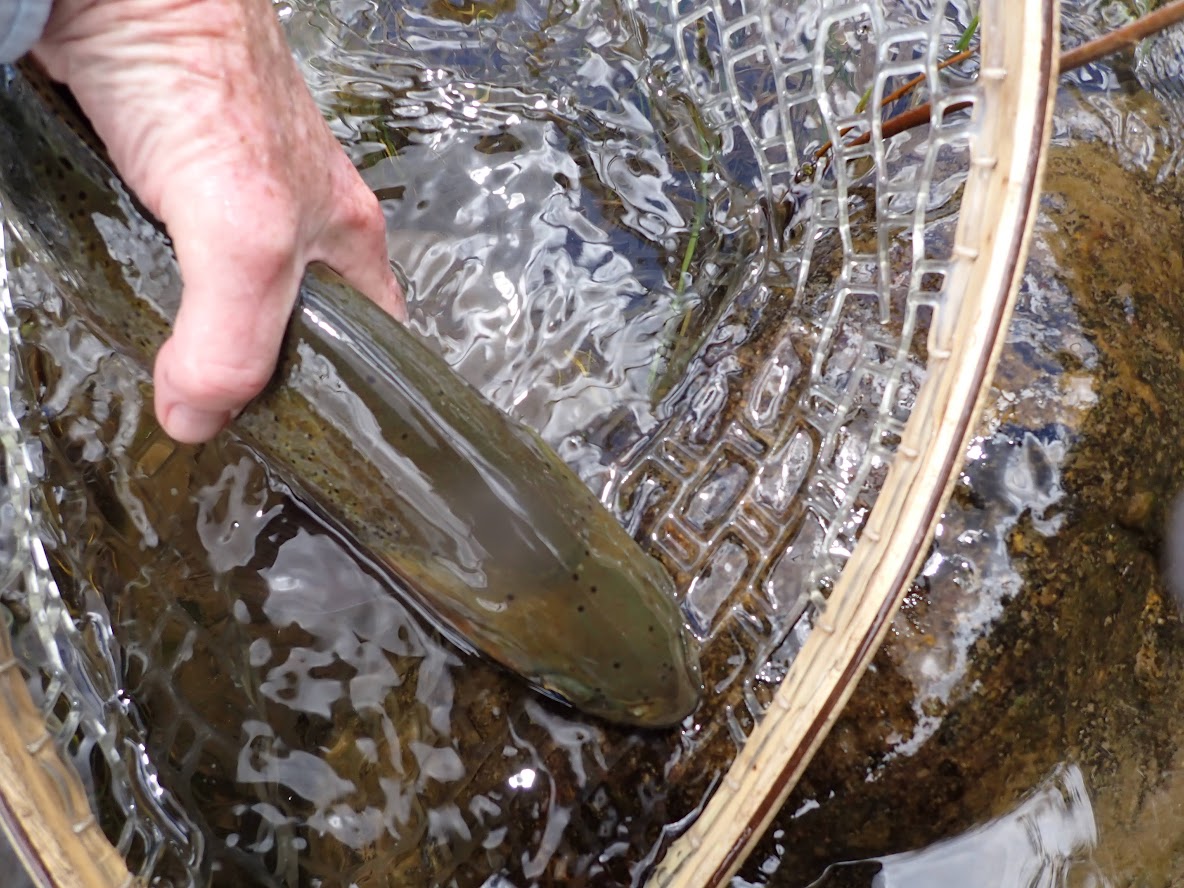 Success on Monday required persistent effort characterized by difficult wading, constant movement, and plentiful casts. I made more than five drifts in many places, that I knew from history to be likely producers. Did I dwell? Based on my normal approach the answer is yes, yet I caught several nice fish on the seventh or even eighth pass, so my methodical approach paid dividends. During my time on the water I speculated whether getting deeper may have been beneficial, but I never resorted to indicator nymphing with a split shot. Perhaps I will adopt that strategy on Tuesday. 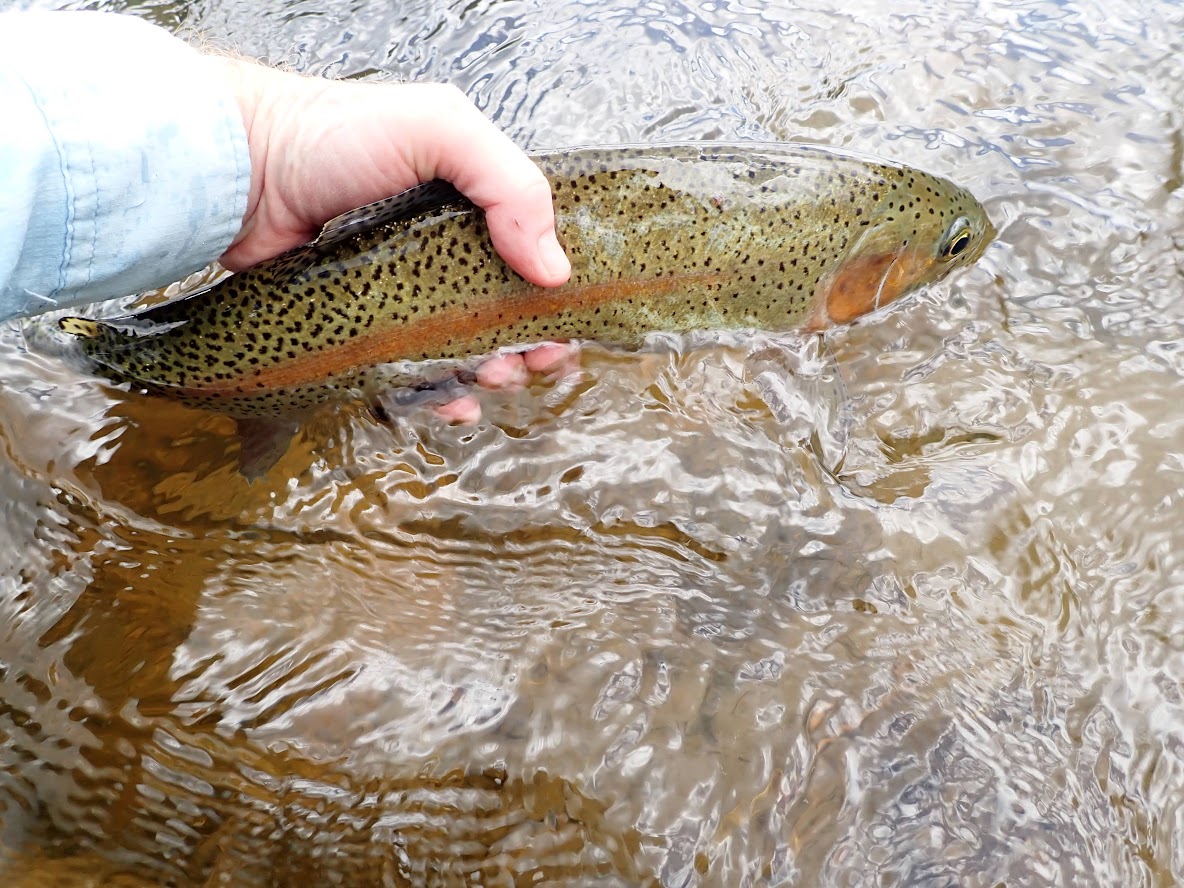 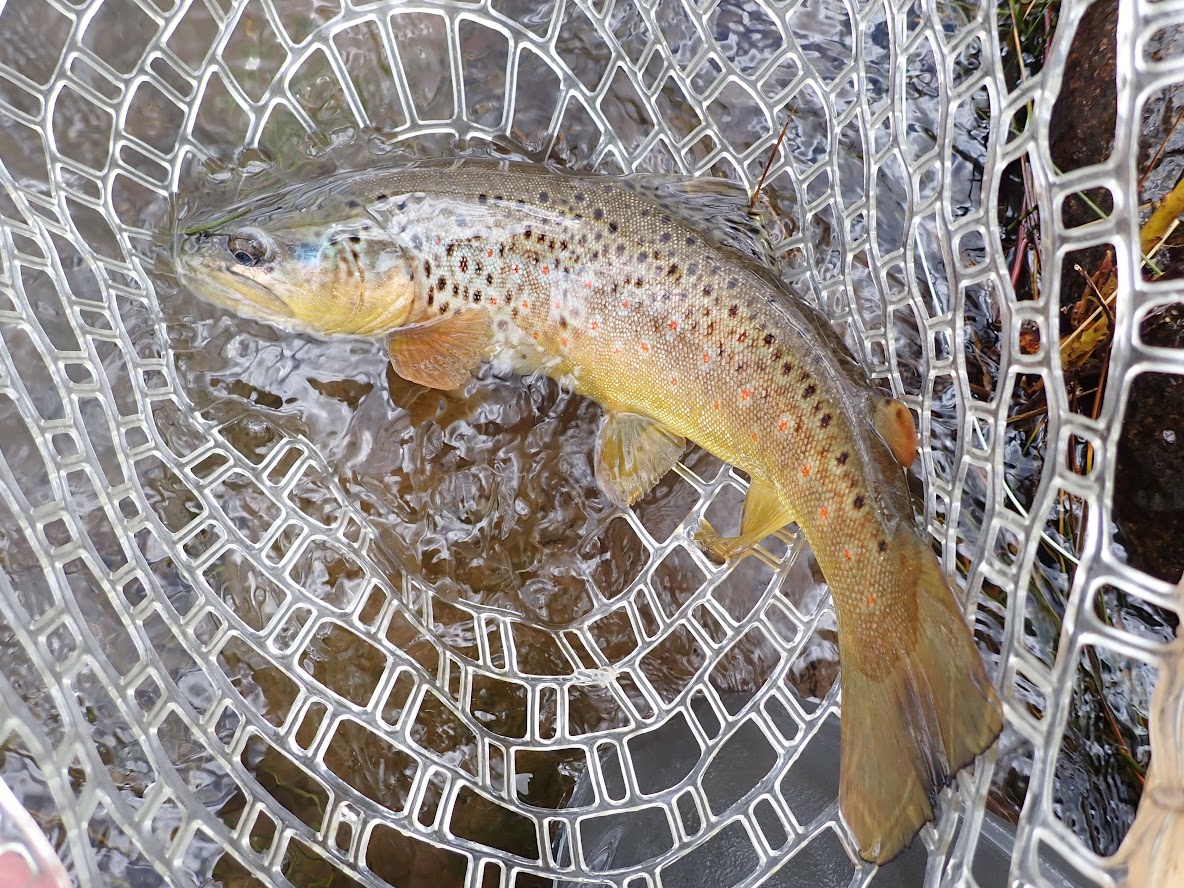 Quality was the name of the game on Monday, as only two of the netted fish were less than a foot long, and two rainbows were muscular trout in the fifteen to sixteen inch range. Additionally two brown trout measured around fourteen inches, and the remainder  were respectable rainbows and browns in the twelve to thirteen inch slot. I will take wild quality fish like this all day long. 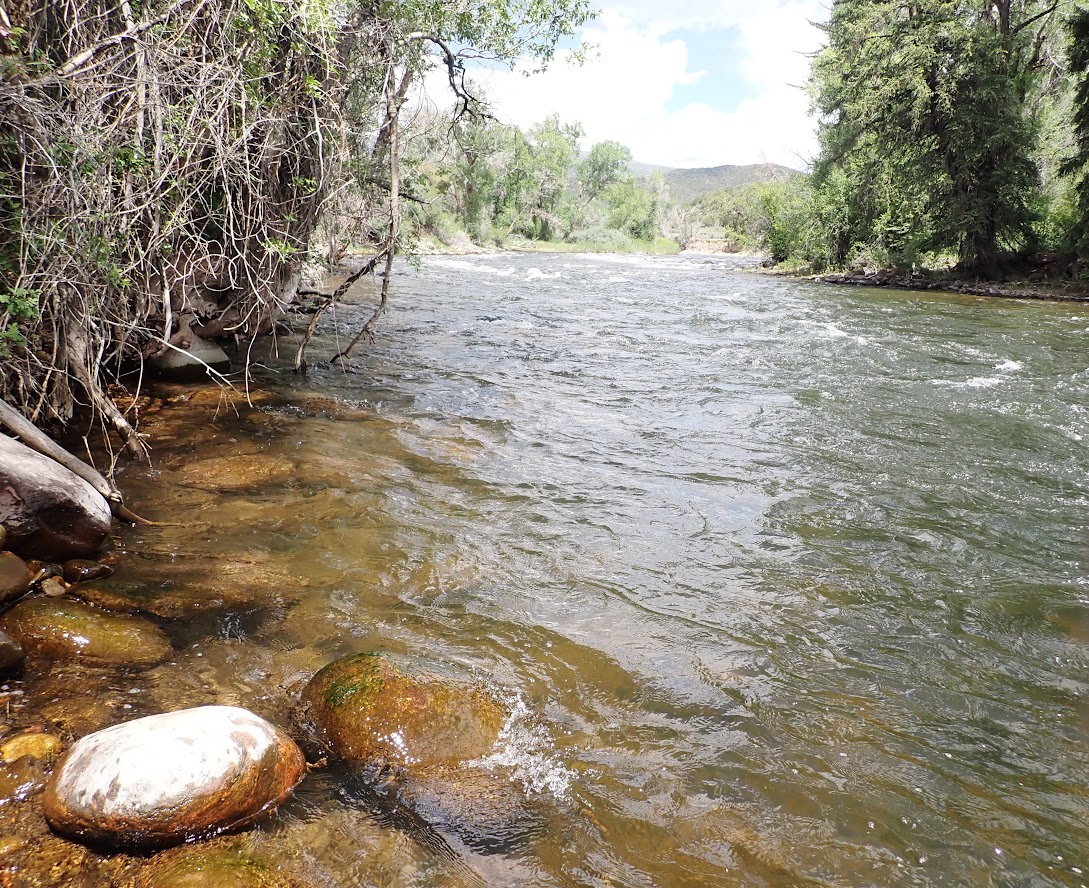 A Favorite Area, but Tough to Wade

It was a fun day. I have had better Eagle River edge fishing experiences, but the ideal flows were ahead of the heavy pale morning dun and yellow sally hatches in 2020. A double digit day is always appreciated, and quality was a positive on June 22.