Wednesday morning we woke up to rain and dense clouds. The storm was blowing from the southeast, and the wind blasted sheets of heavy rain against the large living room window of The Mettie Room. Jane and I ate our normal Door County breakfast, while we marveled at the deluge, and then we noticed water droplets along the top of the window frame; and as more time elapsed, the steady drip of water on to the window sill accelerated. I rushed upstairs to the hot tub room and grabbed a pair of thick towels and returned to the front room, where Jane placed the towels on the sill. This seemed to solve the problem for a short while, and then the rain resumed its intensity and drops appeared along the wooden ceiling beam. Gravity caused this water to fall to the carpet, and Jane reacted by placing the two trash cans beneath the dripping beam.

In the midst of this mayhem I looked up the phone number of The Cornerstone and called the person on duty. Within fifteen minutes an elderly couple arrived to inspect the situation. The gentleman claimed that the windows were recently replaced, and I pointed out that much of the leakage was originating from the ceiling, and therefore it was likely there was a leak in the roof. The woman replaced our towels, and they departed, and shortly thereafter the storm abated. We moved our belongings out of harms way, so the impact on us was minimal, and we were due to check out on Thursday, so we continued with our plans.

In retrospect we really did not have any plans for Wednesday, so while the rain slowed and ended, we once again researched our pamphlets and maps. One map highlighted road loops in Door County, and my attention was drawn to a route that tracked the eastern coastline just south of Whitefish Bay, a tiny town south of Whitefish Dunes. I convinced Jane that this would be an interesting ride, and once the rain ended, we set out for our agreed upon destination. 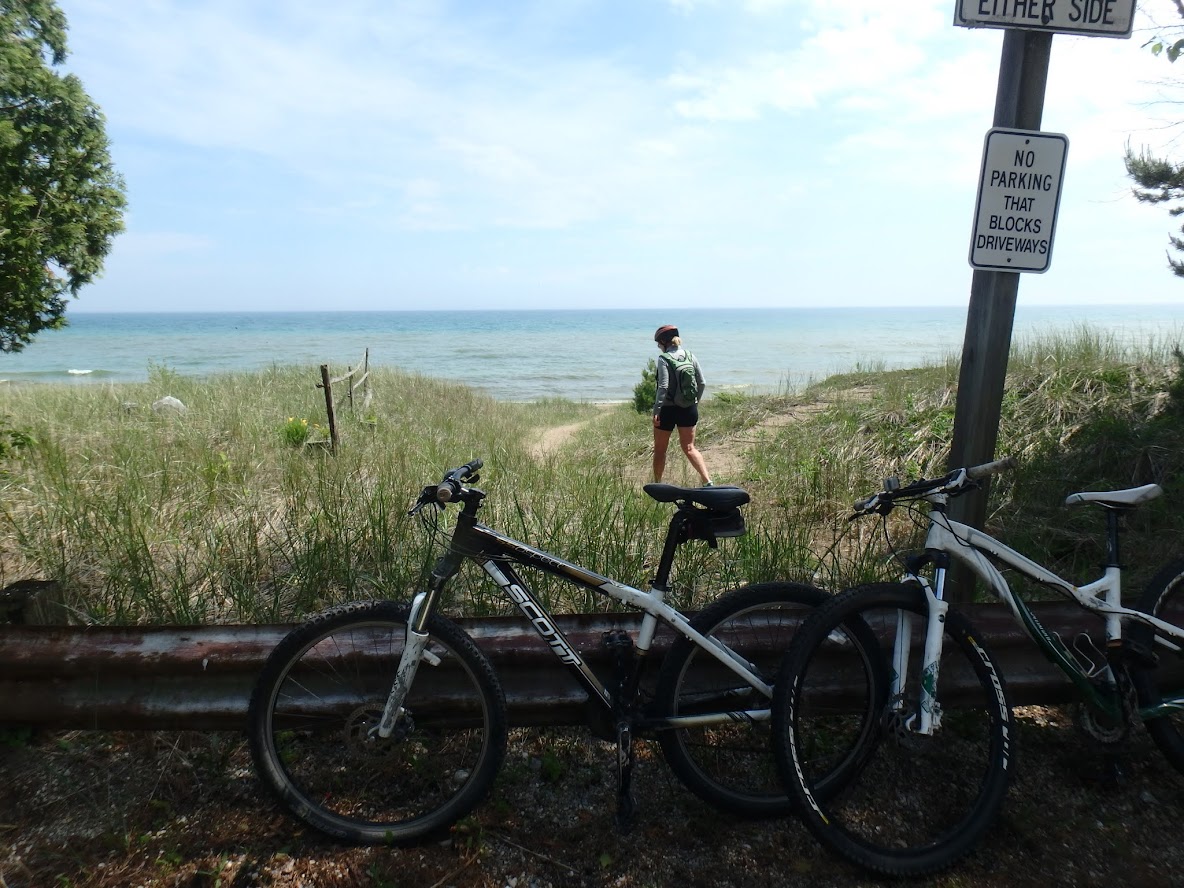 Checking Out the Beach

We found a nice parking lot with a boat launch and a concrete dock, and after unloading our bikes, we mounted them and began our ride. We followed CO T south along the eastern shoreline for six miles until we reached Lily Bay Park. It was not much of a park, as it represented a narrow public parking area and a place to launch a boat. The land between County T and the shoreline contained very nice summer homes that blocked access to the beaches; however, periodically a sign announced the name of a narrow lane, and several were not labeled as private. Jane and I stopped at a few of these to gain access to the beach, and this enabled views north and south. 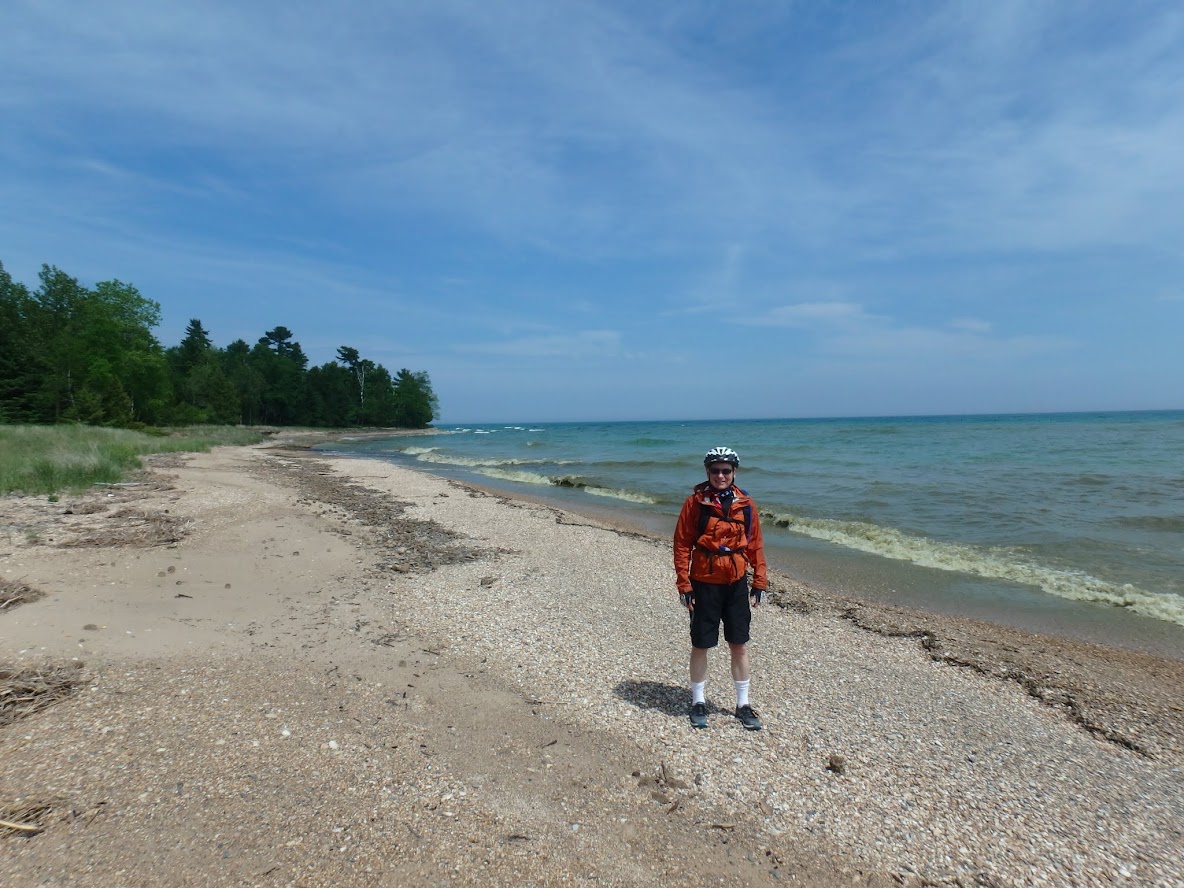 Dave on the Beach South of Whitefish Bay

The return route was uneventful, and after a one hour and fifteen minute out and back we loaded the bikes and returned to The Cornerstone. Jane booked reservations at Pellitier’s Restaurant and Fish Boil in Fish Creek for 6:00, so we changed into our nicest clothes and once again made the drive to Fish Creek. We parked on a side street and decided to browse the shops. We walked south and then crossed the main street that paralleled the waterfront, when once again the sky opened, and buckets of rain fell upon us. We quickly scrambled to find an open store and found ourselves in a small shop that specialized in international gifts. Jane felt guilty about using the shop simply for shelter, so she purchased a nice headband. 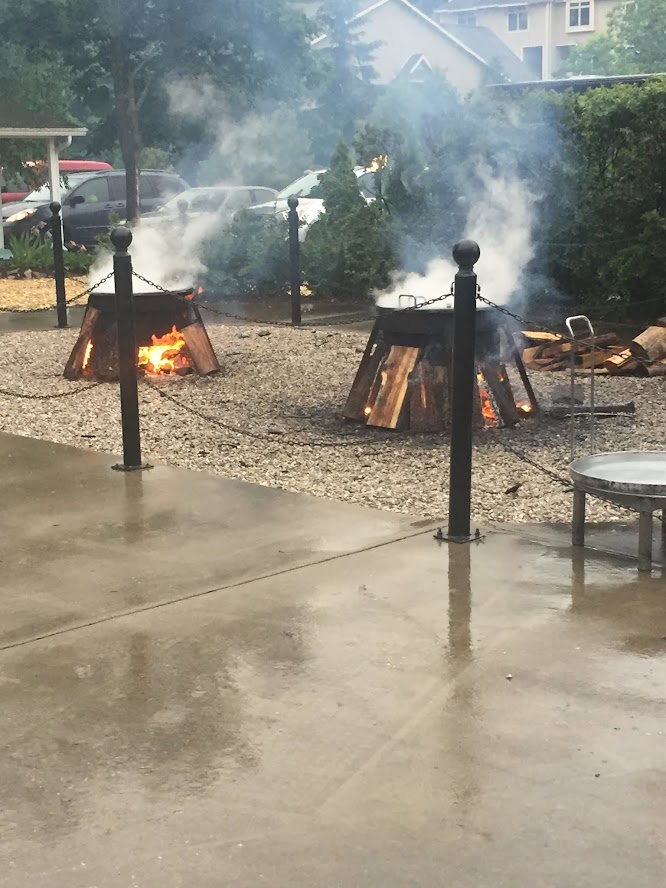 Eventually the rain slowed enough to enable us to sprint to the car, and we moved it to a parking place close to Pellitier’s. We checked in at the host counter and paid for two fish boils. I chose the standard boil, and Jane opted for the lite. We were invited to grab a table, or we could move outside to watch the culmination of the 6PM boil. We actually did both. We chose a table, and then I walked to the area behind the restaurant where two large barrels were perched on stands over a flaming fire. Several young men wearing rain slickers were tending the boil, and I snapped a few photos while attempting to remain somewhat dry. At six o’clock I was back inside the restaurant looking out the large glass window, and I witnessed the flames as they burst from the fire and surrounded the large barrel for a moment. With this climactic ending the boil was complete and ready for consumption. 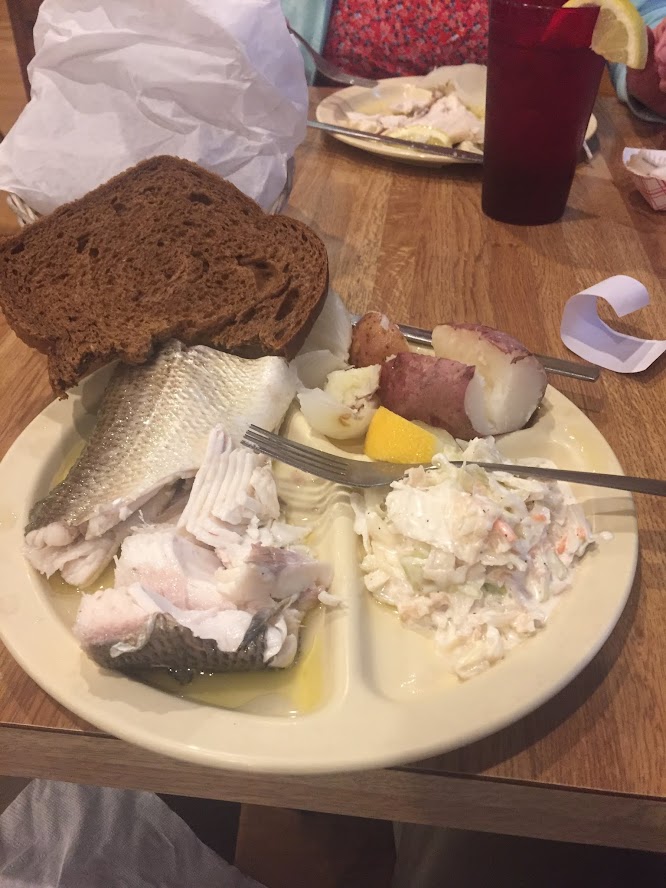 Jane and I returned to our table and within minutes our waiter arrived and deposited two plates in front of us. Each contained a fillet or two of boiled whitefish, two small boiled red potatoes, and a boiled onion. A thick slice of brown bread perched on the lip of the plate. Jane and I ate our boils, but we both agreed afterwards that it was relatively bland, and the high point was the ten second flame up in the back patio. 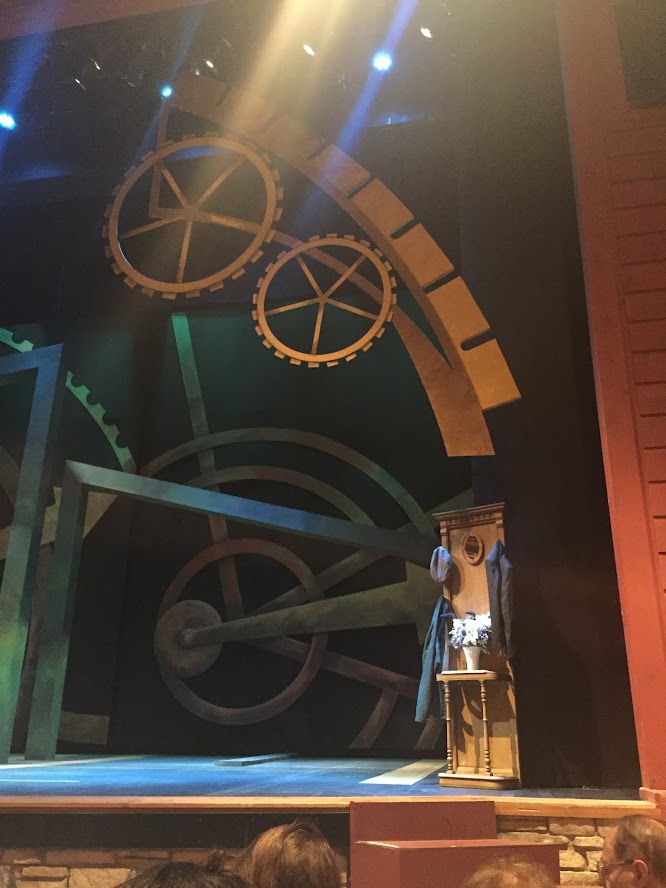 The Stage Is Set for The Actuary

After dinner we proceeded south to the Peninsula Players Playhouse several miles south of Fish Creek. We purchased tickets online for The Actuary. The playhouse opened for the season the previous night and was sold out, so we decided to stay an extra night in order to obtain seating. We both thoroughly enjoyed the performance, and the time raced by. A humorous play was an appropriate end to our Wisconsin road trip in 2017.