With the remainder of the week booked with babysitting and pickleball, I decided to take advantage of an open day on Tuesday to make back to back fly fishing trips. I spent Monday on the South Platte tailwater, and I decided to change it up with a visit to the Davis Ponds in Staunton State Park on Tuesday. Slightly less than a week ago I fished the ponds with decent success; however, my time on the water was limited after completing a long hike to Elk Falls. On Tuesday I devoted more time to the scenic ponds. 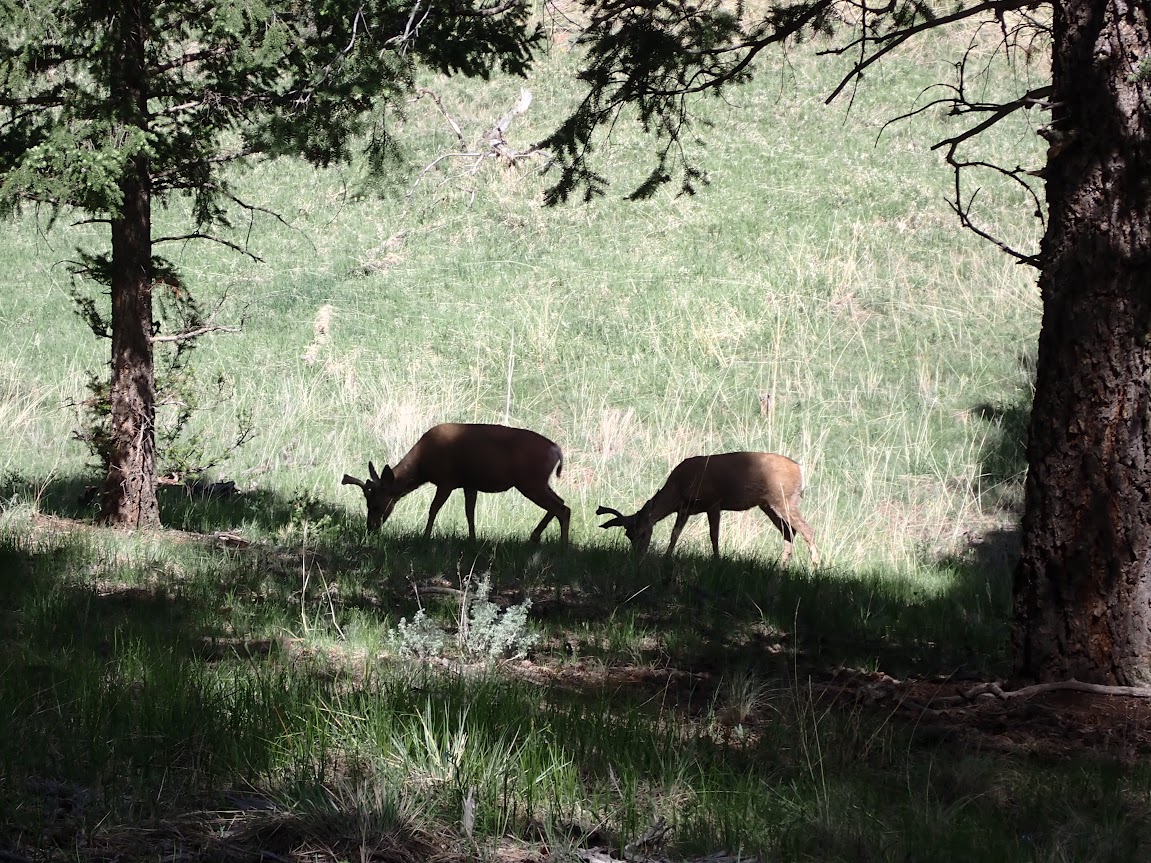 A Pair of Grazers

I departed from my home in Denver at 8:35, and this allowed me to arrive at the middle parking lot by 9:35AM. The air temperature was 60 degrees, and a large cloud blocked the sun, so I pulled on my raincoat for an extra layer of warmth. I fit together my Sage four weight and set out on the Davis Ponds loop for a day of fly fishing. I was .3 mile into my 1.1 mile hike, when the large cloud disappeared, and the sun emerged, and I was slightly overheated. When I arrived at the ponds, I chose the lower body of water, and I positioned myself on the rocky dam breast, as the northeast corner was occupied with several groups of anglers. 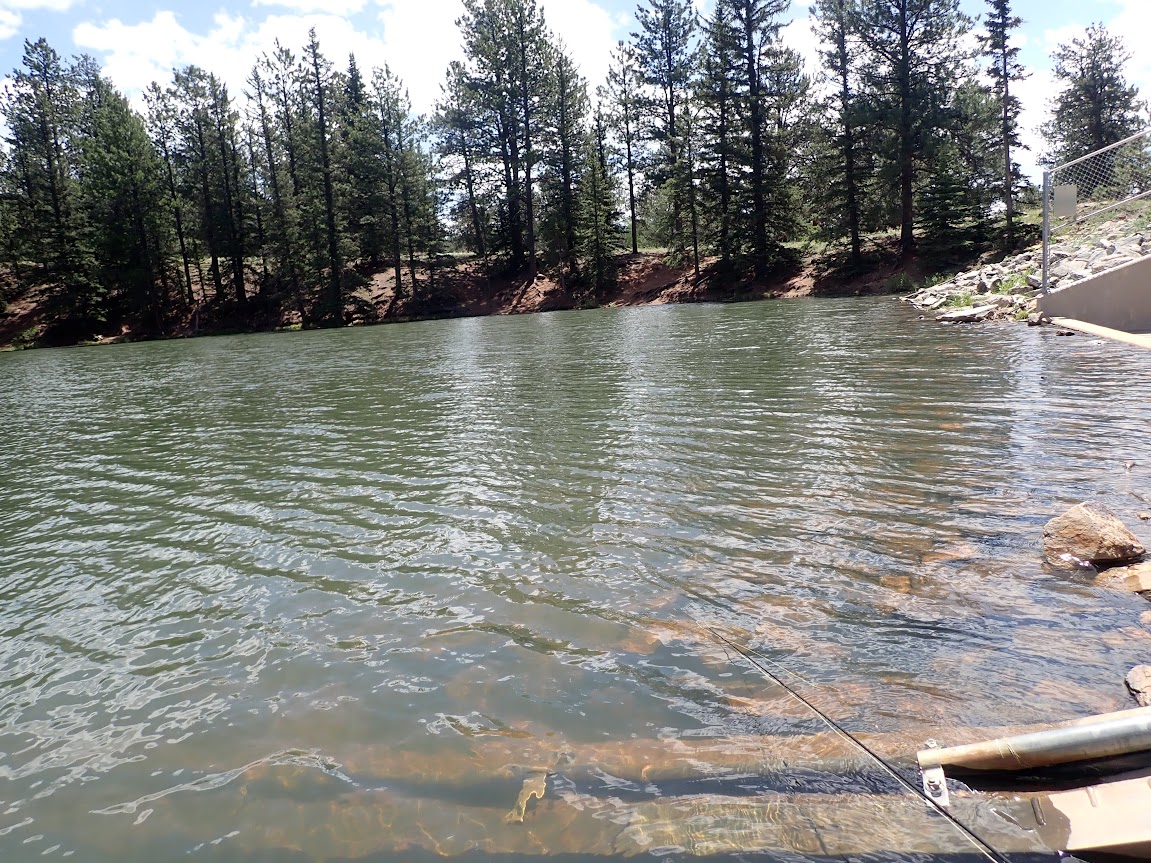 I opted to begin with a pool toy hopper along with an ultra zug bug on a fairly long dropper, and I sprayed casts all along the southern shoreline. By the time I stopped for my lunch break at 12:30PM, the fish count rested on six. Most of the rainbow trout snatched the ultra zug bug, as I stripped the flies in; however, I also duped one on a size 14 caddis, when I switched to a double dry offering. In addition to the ultra zug bug, I cycled through a partridge and orange and a wiggle damsel nymph, before I eventually settled on a size 14 prince nymph. The prince seemed to cause the flies to drop faster, and this in turn resulted in more action, but the overwhelming trout favorite was the ultra zug bug. Six fish in an hour sounds respectable, but the successes were accompanied by many refusals, and I never seemed to develop a rhythm. I also swapped the pool toy hopper for a small grasshopper pattern that I purchased many years ago, and it accounted for one of the first six trout. 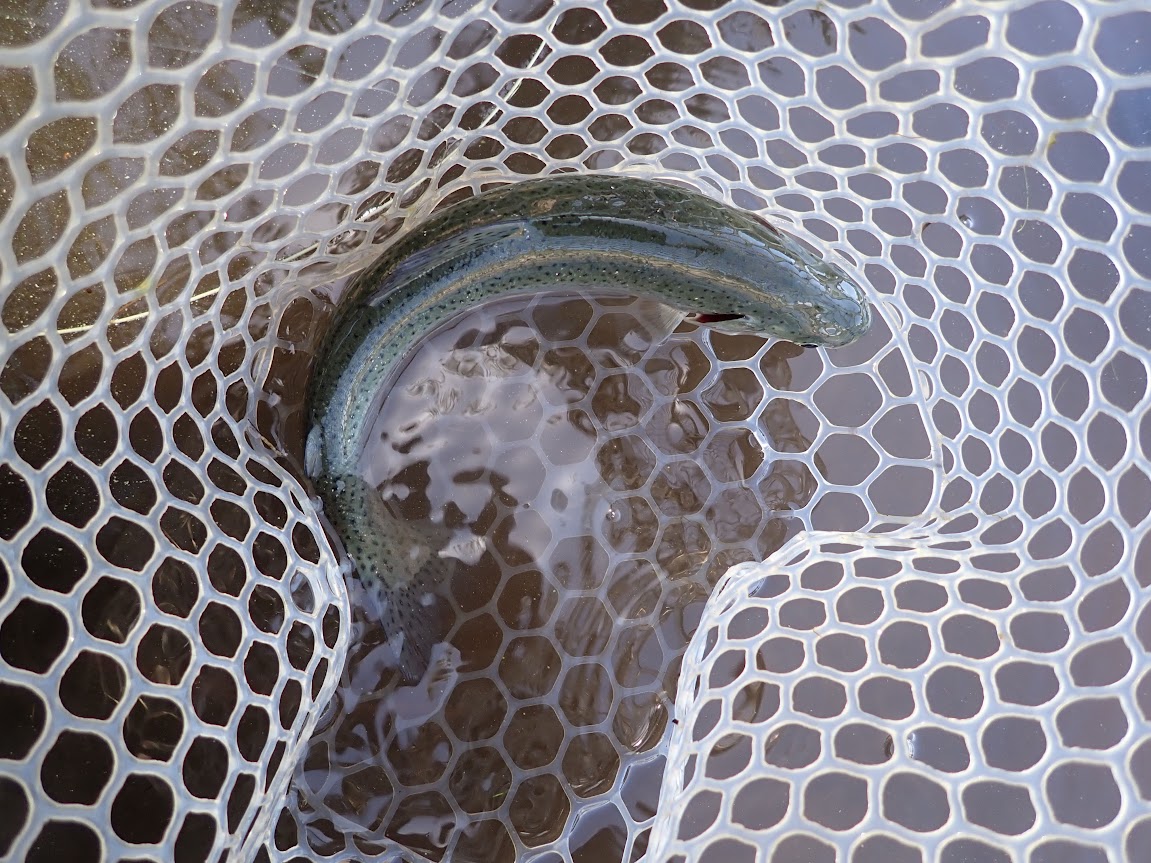 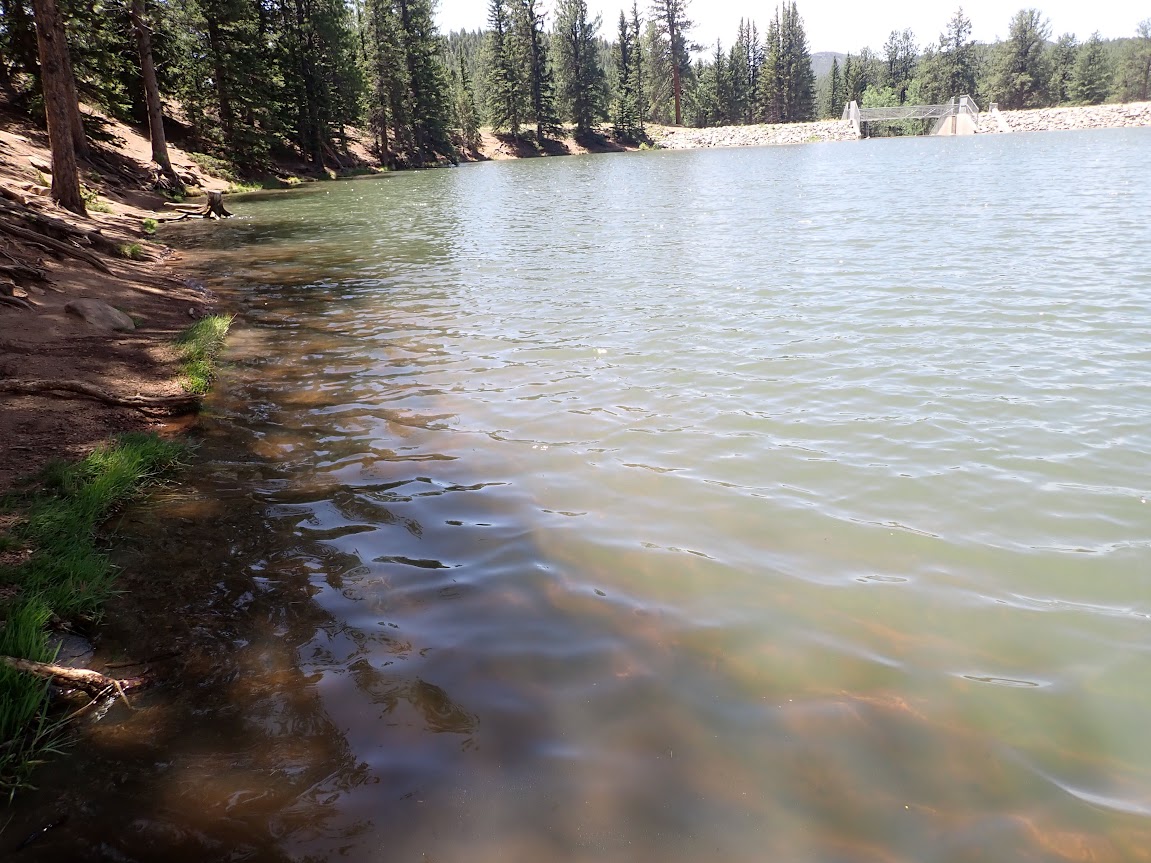 View from the Northeast

After lunch the fishermen in the northeast corner deserted their honey hole, and this provided me with an opportunity to claim their spot. I remained on that section of the lake for the remainder of the afternoon and elevated the fish count from six to eighteen. I snapped off the prince and UZB on a bank of rocks on the north side of the lake, and I used the lost flies as an excuse to modify my offering. I switched the hopper for a size 8 hopper Juan and a bright green caddis pupa and the ultra zug bug. This combination was a clear winner, and most of the afternoon fish grabbed the ultra zug bug with a few locked in on the hopper Juan. 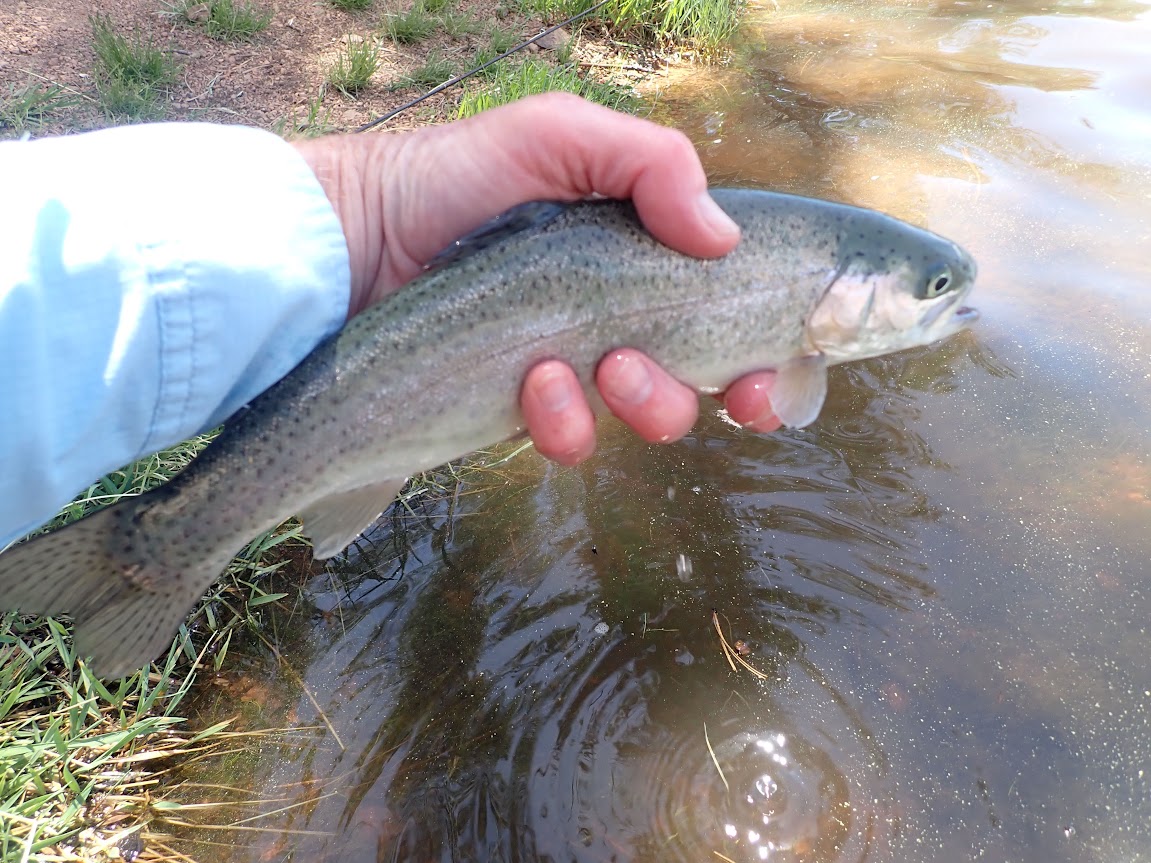 Decent Size for the Pond

During my first trip to the Davis Ponds on 05/23/2022, I settled on an approach that involved slowly stripping a double dry combination that featured a hippie stomper and caddis adult. On the abbreviated 06/08/2022 visit, I discovered that steadily stripping a hippie stomper trailing an ultra zug bug was the ticket. On Tuesday, June 14 yet another approach provided consistent action. I simply cast the large foam hopper along the shoreline or toward the middle of the pond and allowed it to rest for up to thirty seconds. Quite often the hopper disappeared below the surface, and I set the hook and found myself attached to a thrashing rainbow trout. Tuesday was quite windy, and I suspect that the wave action imparted just enough action to the trailing nymphs to interest the trout. 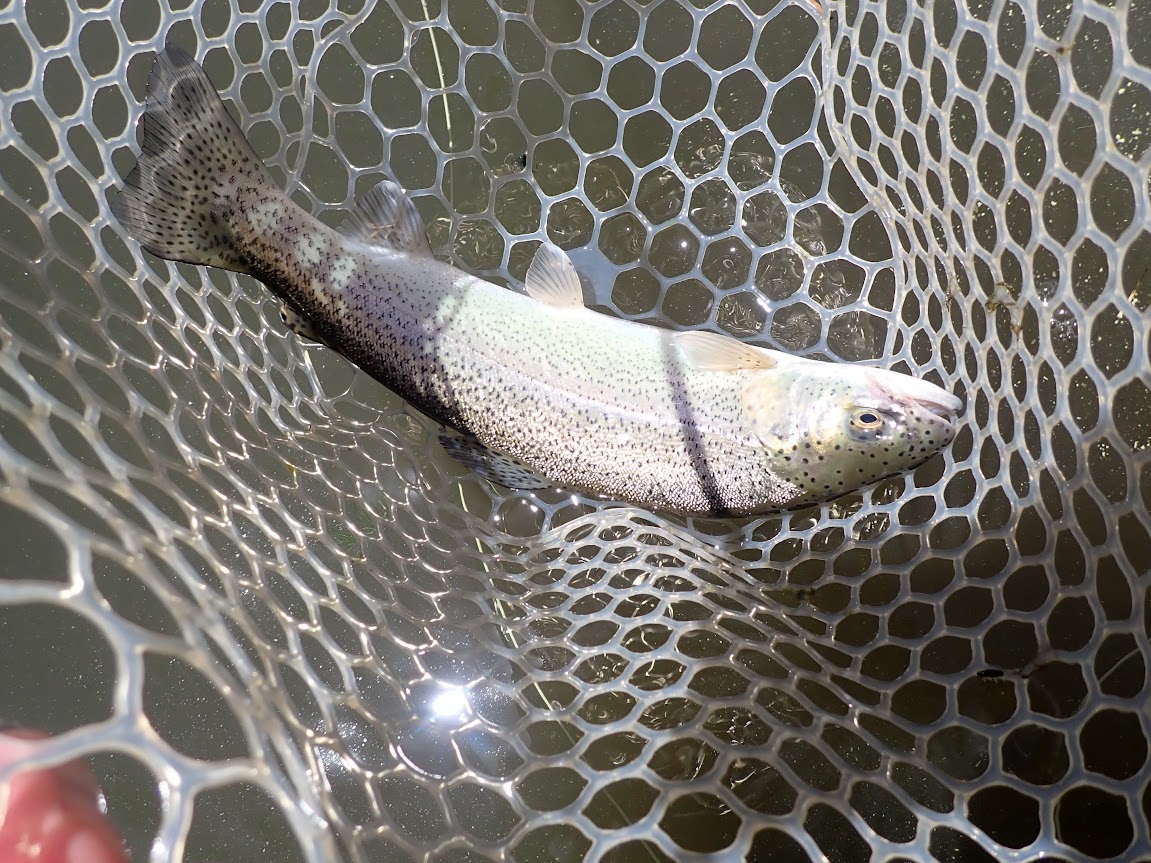 I once again had an abundance of fun at the Davis Ponds. Even though the trout were stocked, I was challenged by the problem of finding the right flies and tactics to fool trout consistently. Eighteen trout in five hours is not a spectacular catch rate, but I was pleased with the results nonetheless. For some reason the last forty-five minutes were fruitless, and I lost interest and stripped in my flies by 3:30PM. I suspect at least one more trip to these ponds is in my future.