Originally I planned to complete a trip to the Arkansas River on September 24; however, when I checked the ArkAnglers’ Fly Shop report, I discovered that the river was stained due to construction work on the F Street Bridge in Salida. Although fishing above the F Street Bridge was a backup option, this did not appeal to me as much as prospecting the quality water below Salida.  I was reluctant to make the nearly three hour drive with the risk of dirty water, so I adjusted my plans.

I settled on the Colorado River at the Pumphouse Recreation Area. The fly shop reports were encouraging, and although the flows were lower than normal for September, I knew that these conditions would actually be beneficial for wade fishing. The Colorado River at Pumphouse was my destination three times in the past, but for various reasons I never devoted a full day to exploring the area. 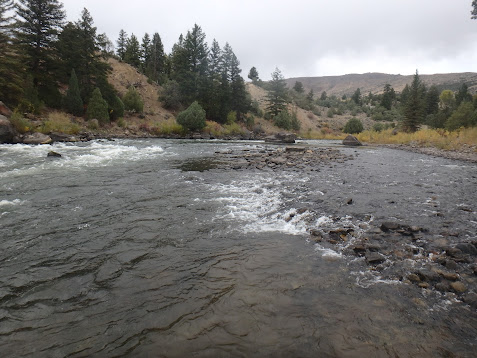 Promising But a Let Down

I arrived at the daily fee parking area by 11AM, and after I assembled my Sage four weight and completed my elbow stretches, I was on my way on the Gore Canyon Trail. I skipped the lower water and then waded up the extremely low right braid next to a large island that split the river. Toward the top of the right channel I cut across the island to the main branch, and here I began my effort to land Colorado River trout. I began fishing with a tan pool toy, ultra zug bug and salvation nymph; and the large surface fly prompted four refusals from small fish in marginal pockets along the bank. I eventually discovered that this was some of the best action during the first four hours of fishing. 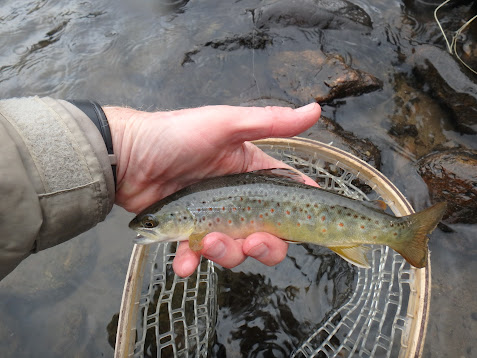 After Wiping Off the Water Spot

When I reached the top of the island, I crossed to the right bank, and between noon and 3:45PM I progressed up the river, while I prospected likely spots with the dry/dropper combination. Along the way I experimented with a 20 incher, hares ear and RS2; but none of these offerings enabled me to feel a sag in my net. I also skipped long sections of the river, that I deemed unproductive, and each time I reached the head of a pool or pocket water, I encountered several anglers. A large percentage of my day was spent hiking and changing flies. 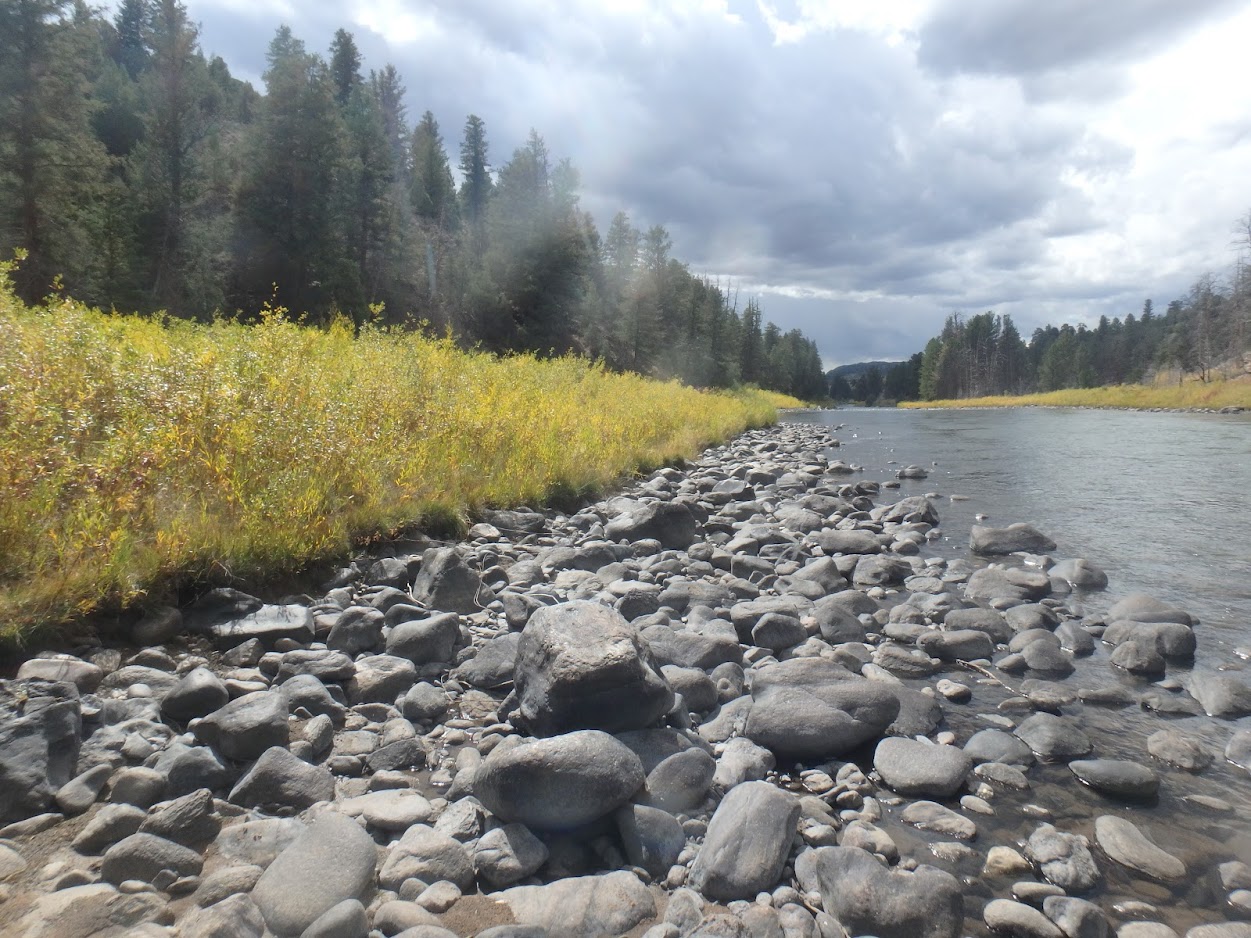 I reached a large vertical rock that served as an impediment to further progress, so I reversed my direction and retreated toward the parking lot. Along the way I paused at several attractive runs and pools, but once again the trout of the Colorado River were not kind to my approaches. Some young anglers near my farthest progression were catching whitefish on nymphs using an indicator set up, so I converted to that methodology for thirty minutes, but the change in approach failed to yield improved results.

When I reached the confluence of the two braids below the island, I reverted to the dry/dropper technique, although I swapped the pool toy for a size 8 Chernobyl ant. The area was by now absent of other fishermen, so I fished along the northern edge of the island for one hundred yards. During this effort I landed a six inch brown trout that grabbed the RS2, and I hooked a ten inch brown that leaped above the water and tossed the fly aside. Another trout refused the Chernboyl, and my frustration escalated.

By 3:30 my confidence reached a low ebb, and I decided to return to the parking lot to check out the river below the boat launches. Halfway between the confluence of the channels and the trail head I passed two spin fishermen, and I greeted the older of the two gentlemen. He asked how I was doing, and I replied, “not very well”. Apparently sensing my dissatisfaction with my day of fishing thus far, he informed me that quite a few fish were rising a short distance below where we were conversing, and I asked for more specific directions. He described the area, and I wandered thirty yards below the two fishermen. 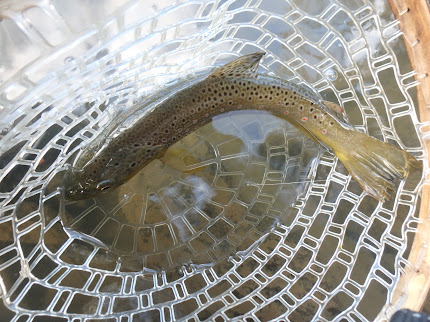 Surprised by This Late Bruiser

My skepticism evaporated, as I paused to observe, and I spotted three dimples in the slow moving deep water within fifteen feet of the bank. I switched to a CDC blue winged olive, and between 3:45 and 5:00 I landed five gorgeous brown trout that sipped the BWO imitation. This may sound easy, but the situation required stealth, patience and careful casting skills. The water was extremely smooth, and I positioned myself to make casts very cautiously. I am right handed, and a dense cluster of trees and bushes arched over the water behind me making my natural cast very challenging.

Fortunately the trout were very narrowly focused on sipping tiny blue winged olives, and this diffused their wariness to some extent. I very slowly waded four feet away from the bank, and I angled my back cast over my left shoulder to create clearance from the bankside vegetation. Initially the fish ignored my size 24 CDC tuft, but eventually three decent brown trout failed to make the distinction between natural and fraud, and I admired them in my net. Two were in the twelve inch range and one was ten inches, but after hours of futility I was very thankful for the dry fly action late in the day. 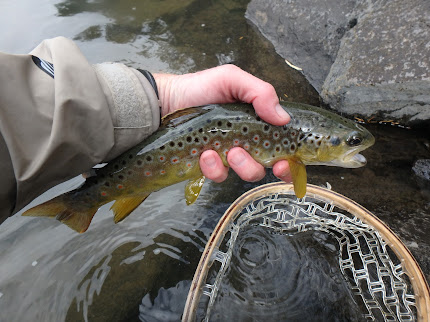 Happy With This Decent Brown Trout

Eventually the sun broke through the clouds, and this reduced the food source to a few random stragglers. The frequency of surface eats declined significantly, but I rested the water and periodically attempted additional delicate casts in an effort to increase the fish count. Of course during this time I managed to snag the trees behind me several times, and in one instance I was forced to snap off the productive size 24. Finally I grew weary of the delicate finesse game, and I decided to return to the car. By now my watch displayed 4:30, and I knew from previous trips that Jane’s concern over my safety would elevate significantly, if I lingered too long.

I began strolling along the Gore Canyon Trail, and after twenty yards I stood next to a section, where the river created a small indentation next to a beach, and I was shocked to see another pod of actively feeding fish. I could not resist the temptation to target these steady feeders, so I positioned myself at the tail of the nice shelf pool. Once again a cluster of trees was behind me, but unlike the other setting, I could side arm cast over the beach area for decent clearance.

At least eight if not more fish dimpled the surface, and I targeted a steady riser ten feet above me. On the fifth drift a surface disturbance coincided with the position of my fly, and I quickly raised the rod tip and set the hook. When I got my first glimpse of the thrashing fighter, I was shocked to learn, that I was connected to a strong fifteen inch brown trout. One can imagine my excitement, as I slid my net beneath the prize, after the long period of futility during the early afternoon.

But the story does not end here. I released the brown and resumed casting to some rising fish to my left, but this area presented more glare, and I was unable to follow my fly. I turned my attention once again to the area that produced the prize brown, and another fish rose four feet upstream from the site of my recent success. I began lobbing soft casts to the area, and on the eighth drift a fish slurped my offering. Once again I reacted swiftly, and this fish battled even harder than the previous, although once it was in my net, it measured closer to fourteen inches. Needless to say I was in a state of heightened elation with the end of day successes. 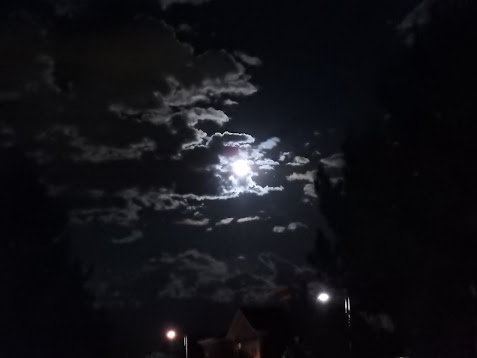 After I released the second unexpected bruiser, I glanced at my watch and noted that it was a few minutes after 5PM. Despite continued feeding in the quality pool next to me, I clipped my fly to the rod guide and walked at a brisk pace back to the parking lot.

What a strange day. I rode an emotional roller coaster from hopeful expectations to the depths of despair over my inability to attract fish to my flies over an extended four hour period. Then in the final hour I was energized by a fairly dense blue winged olive hatch and pods of actively feeding trout. I was able to overcome some casting and lighting hurdles in order to land five wild brown trout, and the netted fish were quality fish. I may consider another visit to the Colorado River; however, I will not rush to arrive there early.