After two fun nights of camping in Rocky Mountain National Park, I had Wednesday available for a day of fishing. I examined A Fly Fishing Guide to Rocky Mountain National Park in conjunction with the map in the glossy brochure provided by the park and decided to explore the lower Colorado River from the southwest boundary upstream. The map indicated that a path began at the Harbison Meadows Picnic Area, and it intersected with the Colorado River after a one mile hike.

After packing up our camping gear, Jane and I departed from the campground by 10AM and drove south, until we reached the aforementioned picnic area just north of the west side entrance gate. The temperature was 55 degrees as I assembled my Orvis Access four weight and pulled on my waders. Jane accompanied me on the one mile jaunt through the woods, until we connected with the Colorado River Trail. Here we turned right, and then after a short distance I spotted the river on my left. I said my goodbyes to Jane, and she reversed her direction, as she planned to hike the stock trail to the Kewuneeche Visitor Center. 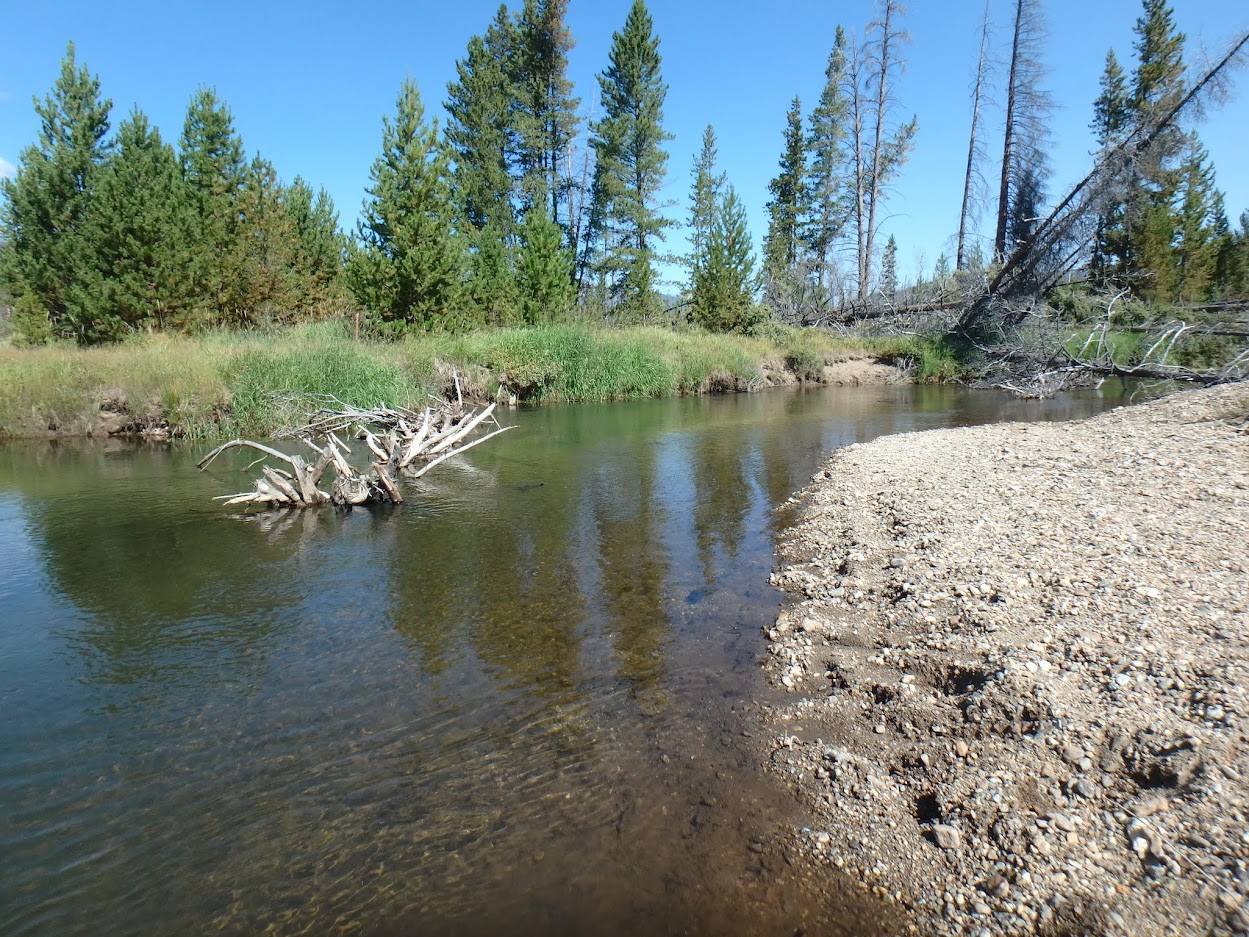 I angled away from the trail and crossed a marshy area until I reached the river. I was disappointed to discover private cabins and summer residences on the western side of the river. I labored to hike away from the road only to discover that the stream in the southwest corner was accessible via a road. To begin my day of fishing I tied an amber bodied size 14 stimulator to my line and began to cast. The first section of the river consisted of a slow deep pool, so I lobbed a cast to the middle and just behind an exposed stump. I was astonished when a nine inch brown trout darted to the surface and inhaled the stimulator. Was it going to be this easy? 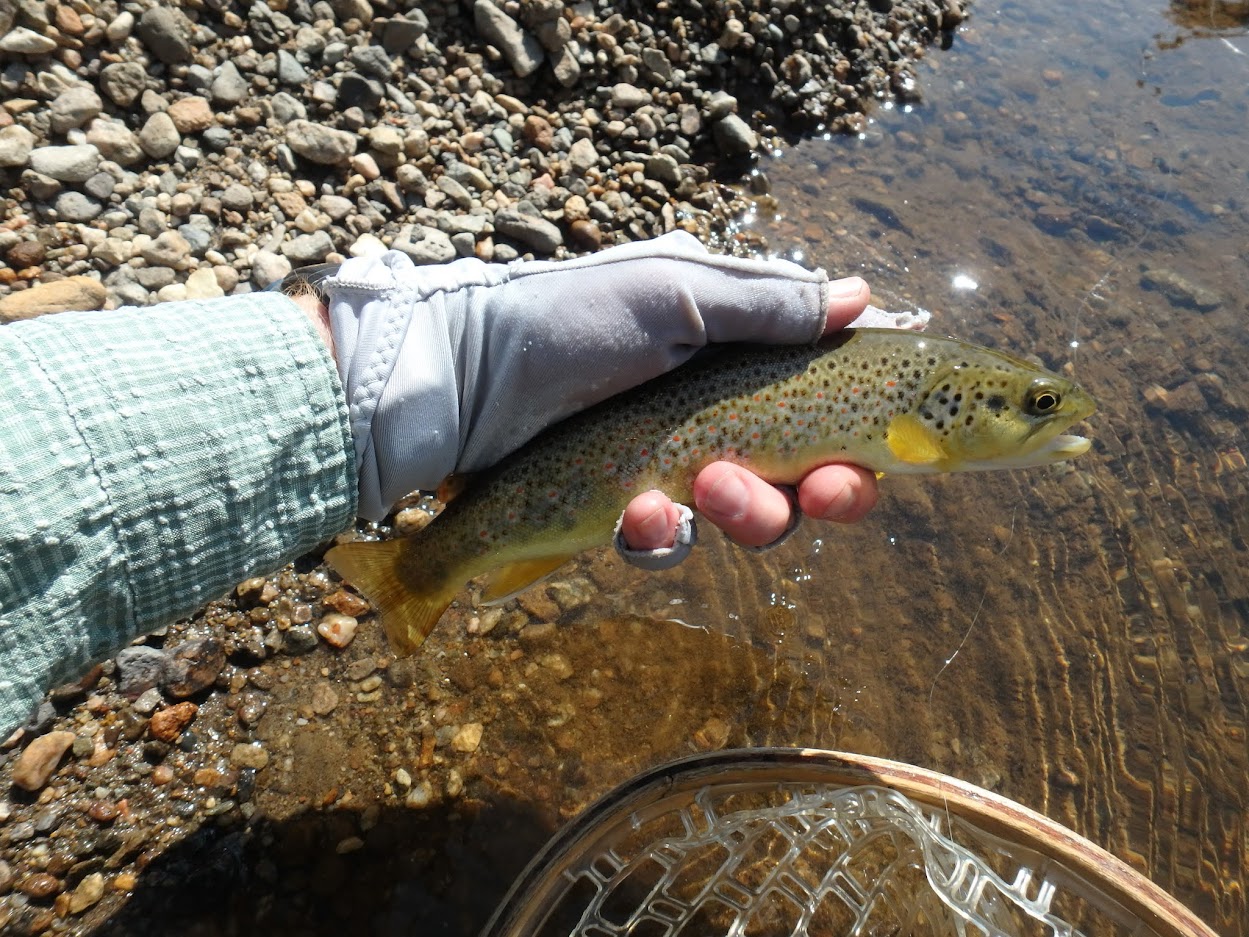 First Fish Was This Brown Trout

A second cast landed five feet below the first, and another brown trout smacked the stimulator, but this aggressive feeder was only seven inches long. Above the mid-pool obstruction I ran some casts tight to the opposite bank, and another small brown snatched the stimmy just as it was about to drag. Three fish in fifteen minutes in the first pool had me feeling quite optimistic. 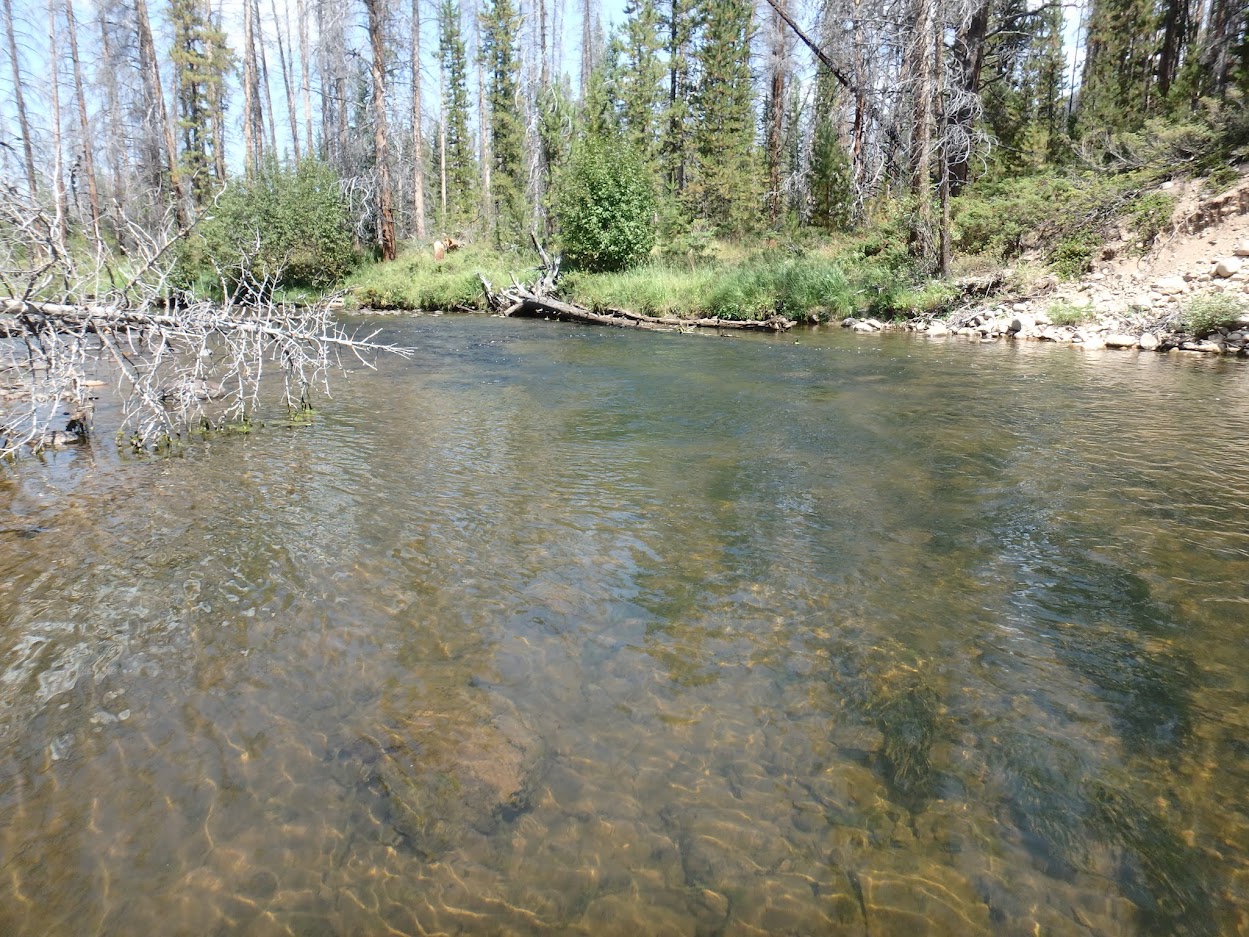 Once I departed the large pool, however, the day grew more challenging. The river in this area was quite different from what I am accustomed to. Long smooth deep pools represented the salient water type, and they were typically connected by shallow runs. I really did not have a strategy for attacking the pools, so I began to systematically make long casts to within one to two feet of the bank. This worked somewhat, although I also experienced a significant quantity of refusals from tiny brown trout. From 11 until 2:30 I moved the fish count from three to eight, but five fish in 2.5 hours of fishing is really only an average catch rate. I covered a huge amount of water and made countless long unproductive casts. In fact Wednesday August 31 probably strained my back and arm muscles more than any previous outing in 2016. The water was low and clear, and the absence of significant impediments to a backcast allowed me to approach from a distance.

During the 11 to 2:30 period I landed one small brook trout, and for half of this time I added a size 20 black parachute ant as a second dry. The ant strategy accounted for two of the five fish, and in a nice segment with deep slow moving water along a high bank, the ant produced a long distance release. I continued to fish the ant as a trailing dry for another half hour until I decided to change my lineup. The stimulator was attracting all the attention and nearly 100% of the looks resulted in refusals, so I committed to downsizing. I tied on a size 16 gray caddis, and when I began to connect the ant, I realized that the hook point was broken off! This clearly explained the lost fish in the attractive bank section mentioned earlier. 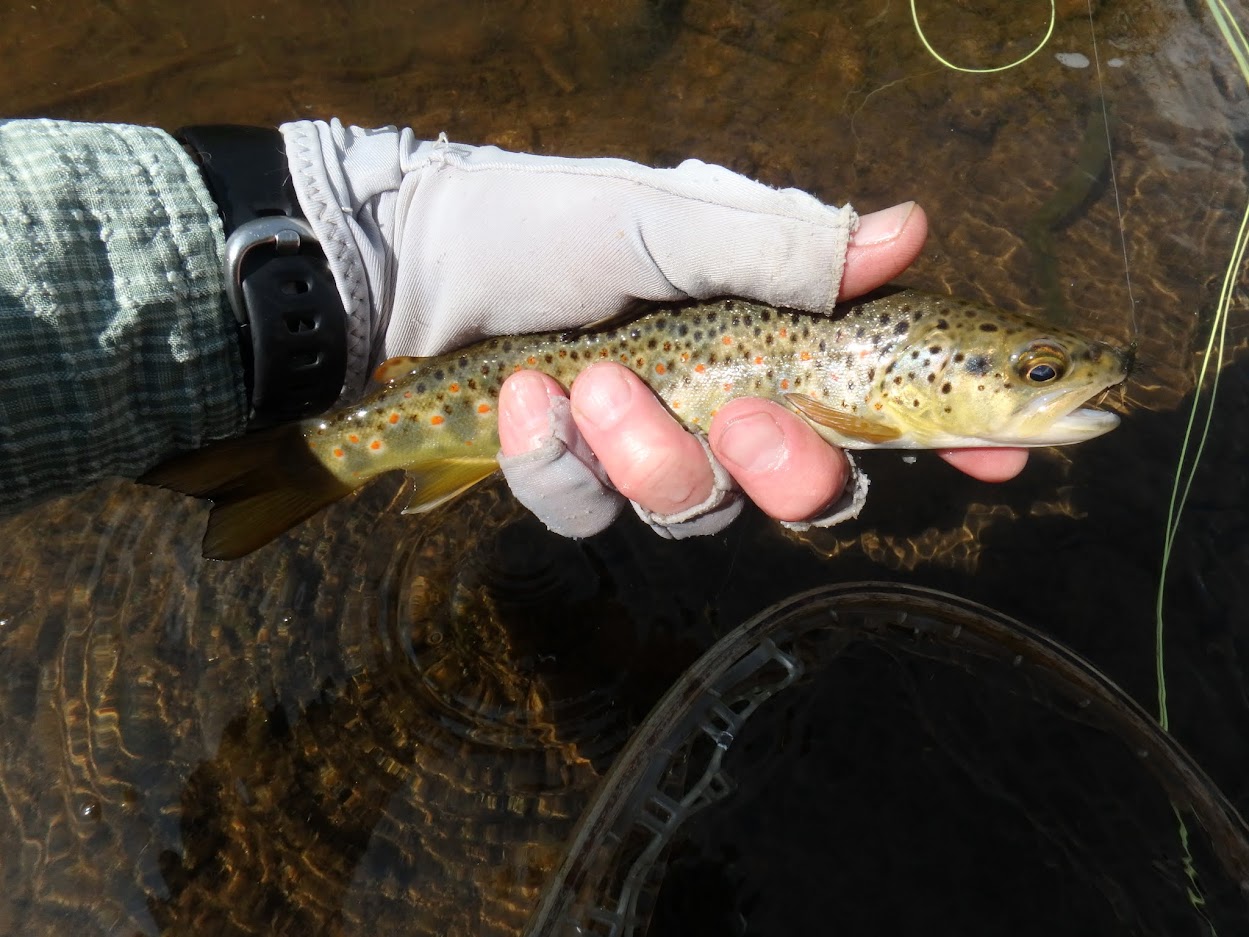 From 2:30 until 4 when I quit I incremented the fish tally to thirteen. The size sixteen caddis was clearly the most productive fly of the day. One of the caddis eaters was an eight inch rainbow, but all the others were brown trout. The caddis seemed to be at its best in moderate riffles and places where the current ran along the bank or next to substantial mid-stream structure.

At 4 o’clock I hooked my fly in the rod guide and reeled up the line. Fortunately I found a nice trail along the river, and forty-five minutes later I was back at Harbison Meadows. Jane grew concerned about my absence, and she sauntered back and met me .2 miles from the trailhead. 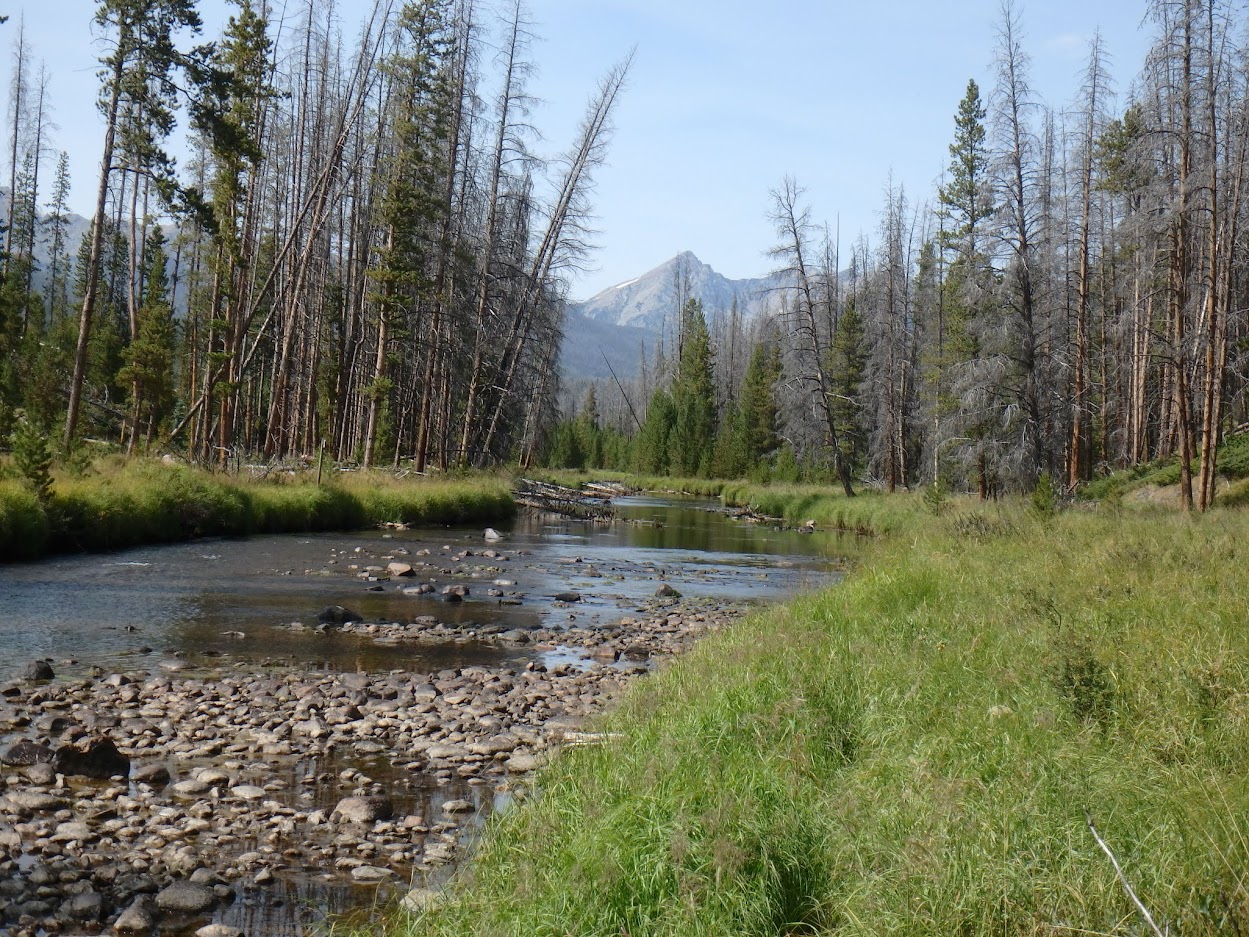 The Peak in the Distance Caught My Eye

Wednesday was a tough day from a fishing perspective. The quality of the fishing did not match the physical effort expended to hike one mile from the trailhead. I had the river to myself, but the well worn path and tamped vegetation told me that this segment of the Colorado River received more than moderate pressure. I expected to catch small brook trout, and instead my net was dominated by tiny brown trout. I probably landed and released fifteen tiny browns that failed to exceed my minimum size limit. Nevertheless I was in a beautiful location and essentially had the river to myself. I managed to find a fly that was reasonably effective and registered a thirteen fish day. A day of fishing in Colorado is always a positive.