Not all fishing days are created equal. Friday was a stark reminder of the truth of that statement. A second overstated weather forecast lured me into a trip to the western section of Clear Creek Canyon. The temperature in Denver as I drove west at 11AM was 41 degrees, and I based my decision to fish on a projected high of sixty degrees in Idaho Springs. Could the meteorologists be accurate? Amazingly by the time I entered the eastern end of Clear Creek Canyon, the dashboard temperature elevated to 49 degrees; and when I backed into a parking space on the eastern side of Tunnel 6, I was basking in the comfort of 55 degrees. The air temperature seemed to be rising, as one traveled west and gained elevation. It was a peculiar weather phenomenon.

South Boulder Creek on Thursday provided a splendid outing especially for early November, but I ratcheted down my expectations for Clear Creek. Flows were in the ideal range at 55 CFS, but I was concerned that the trout would be preoccupied with procreation given the predominant presence of brown trout. Since my arrival coincided with my normal lunch time, I remained in the car and chowed down on my sandwich, garden-raised carrot and Greek yogurt. With the matter of nourishment out of the way I pulled on my waders and set up my Orvis Access four weight. A well worn path led me down a hill from the parking area to the edge of a long featureless pool. 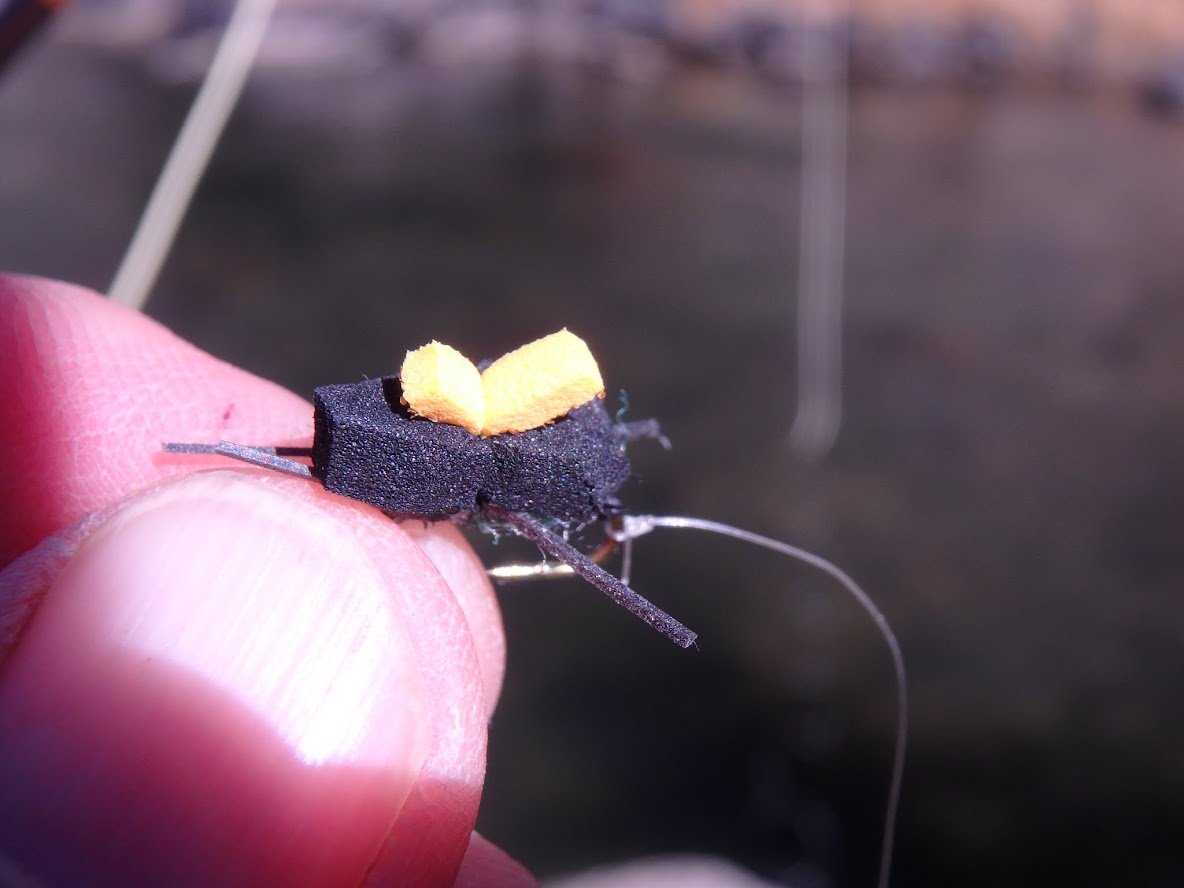 The Hoped For Fish Attractor

Jake’s gulp beetle was favored by Clear Creek trout in previous autumns and in a few earlier outings in 2017, so I knotted a size 12 version to my line, and I began to cast directly upstream along the left bank. I might as well have been floating leaves in the creek, because no trout stirred or revealed their presence. When I reached the top of the long pool, I made some across and down drifts, and finally a small brown trout elevated and pressed its nose against the beetle and firmly rejected my offering. I was disappointed, but at least I located a fish to target. I sensed that Friday was not going to be a day of fast action, so I decided to focus on this fish, and I exchanged the beetle for a size 18 black parachute ant with a pink wing post. Negative. The fish never even bothered to rise to inspect the small terrestrial.

I finally surrendered and moved to the next section, which was characterized by a series of fast chutes and short pockets. Presenting the small ant in these turbulent conditions caused my confidence to sink, so I returned to the Jake’s gulp beetle, although this time I added a three foot dropper and tied a flashback baetis nymph to the end. Near the top of the cascading pocket water section a larger shelf pool appeared, and I lobbed the two fly combination to the left side of the fast current. On the fourth drift a fish refused the beetle, but on the next drift I lifted the flies near the scene of the rejection, and a barely six inch brown trout nabbed the trailing nymph. Hooray, I was on the scoreboard on November 3.

I was now on the north side of the oxbow bend, where the stream curves around the mountain that was pierced by Tunnel 6, and shadows extended over the entire width of the creek. I began executing across and downstream drifts of the beetle and nymph in slack water areas along the far bank, and I managed to generate one more refusal to the foam beetle. When I emerged from the shadows near the western portion of the bend, I encountered another section with fast shallow water, and I skipped this stretch and ambled westward until I was below US 6. A group of female rock climbers were clustered at the base of the rock edifice on my left before I reached the highway. 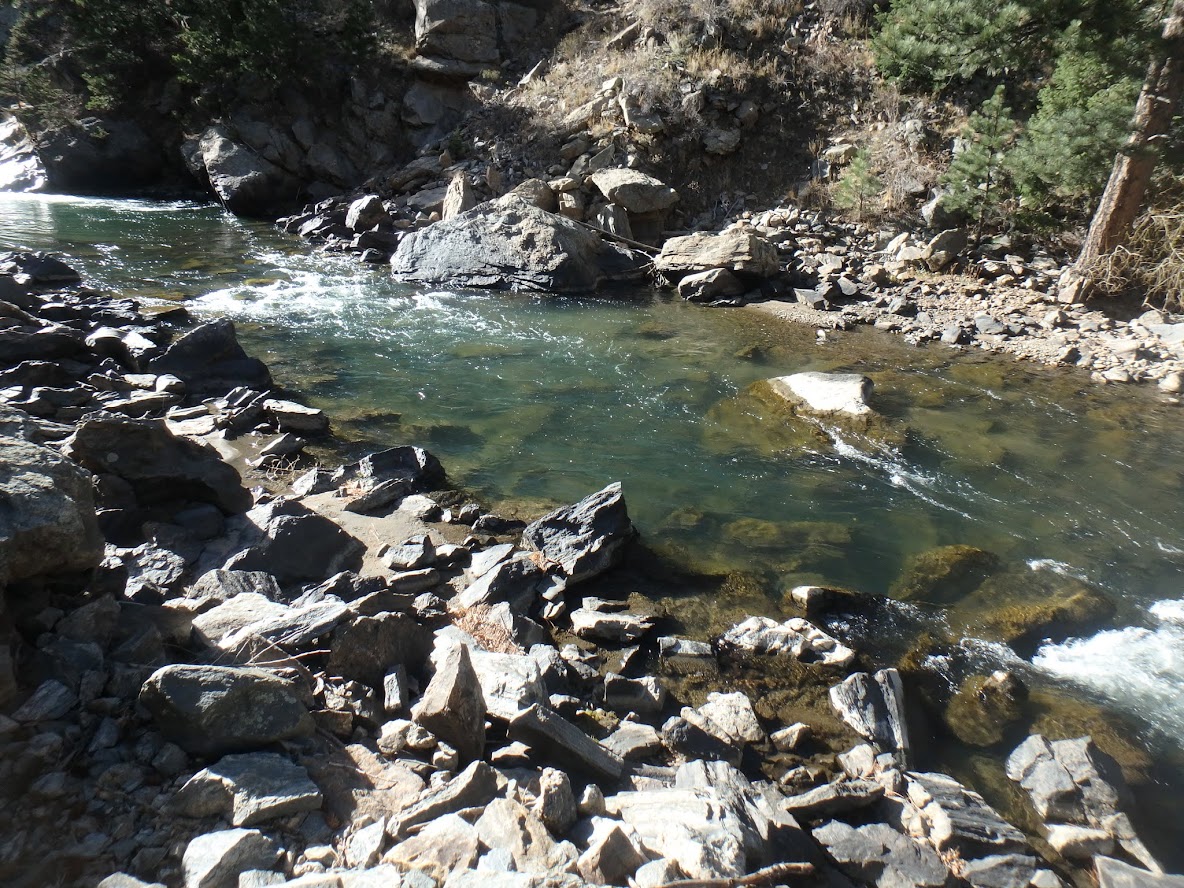 I scanned the stream ahead of me, and I spotted a spectacular pool that stood out due to the aqua color of the slow moving water. A smaller pool was situated just below the granddaddy of holes, so I prospected it first, but it offered no proof that trout called it home. I decided to go for the big boy, and I carefully approached the bluish-hued hole. As I paused to observe, I spotted three dark shadows that hovered just off to the left of the curling main current. The fish closest to the lip of the pool maintained a position near the surface, so I targeted it for my casts. Surely I could entice one of these active feeders to consume one of my delectable creations. I began with the beetle, and the visible trout slowly elevated, pressed its nose against my fly, and then sank back to its holding position. Drat, that was not the desired outcome from my effort.

Rather than disturb the pool with more casts, I resorted to swapping the beetle for an ant. Alas, five drifts of the ant generated yet another rejection from the trout closest to the lip of the pool. I paused and observed again, and I thought I noticed some tiny blue winged olives. Of course, I thought to myself, there was a sparse BWO hatch in progress, and one of my CDC olives would finally unlock their jaws. The ant came off my line, and a size 22 CDC blue winged olive replaced it. I fired some nice casts to the edge of the current seam, checked my rod high and fluttered the tiny mayfly down to the surface. The blue winged olive failed to induce even a look, and the constant motion of my casting caused the visible fish to flee out of sight. In addition to my inability to find the right fly to fool the trout, another factor came into play. The wind began to gust in fierce bursts, and my casts morphed into random efforts with the fly landing only a few feet in front of my feet. The whole scene reminded me of tossing dandelion seeds into the wind.

I was once again in the shadows, and my hands were beginning to stiffen. My confidence was a smidgen above zero, so I decided to end my frustration and called it a day. I hiked back on a nice trail above the creek and welcomed the shelter of my car. Why was I able to land only one small brown trout on Friday, November 3? I blamed it on the spawning process. I did not observe any spawning beds or see actively spawning fish, but it is rare to visit Clear Creek and not see much more evidence of the presence of fish. One six inch fish on November 3 was a notable accomplishment.