Jake’s gulp beetle rocks, and I am in love with moody Clear Creek. Jane and I returned from a five day trip to Pennsylvania, Maryland, and West Virginia on Monday; and even if I had time to fish, the blustery wind guaranteed that I would not. Tuesday was forecast to be cooler but less windy, so I made plans to visit Clear Creek. Prior to our trip I enjoyed several very productive days on Clear Creek, and in fact the size of the fish were comparable if not greater than my landed count on the Big Thompson. With winter around the corner I valued the idea of investing only a forty-five minute drive in case the weather was uncooperative. 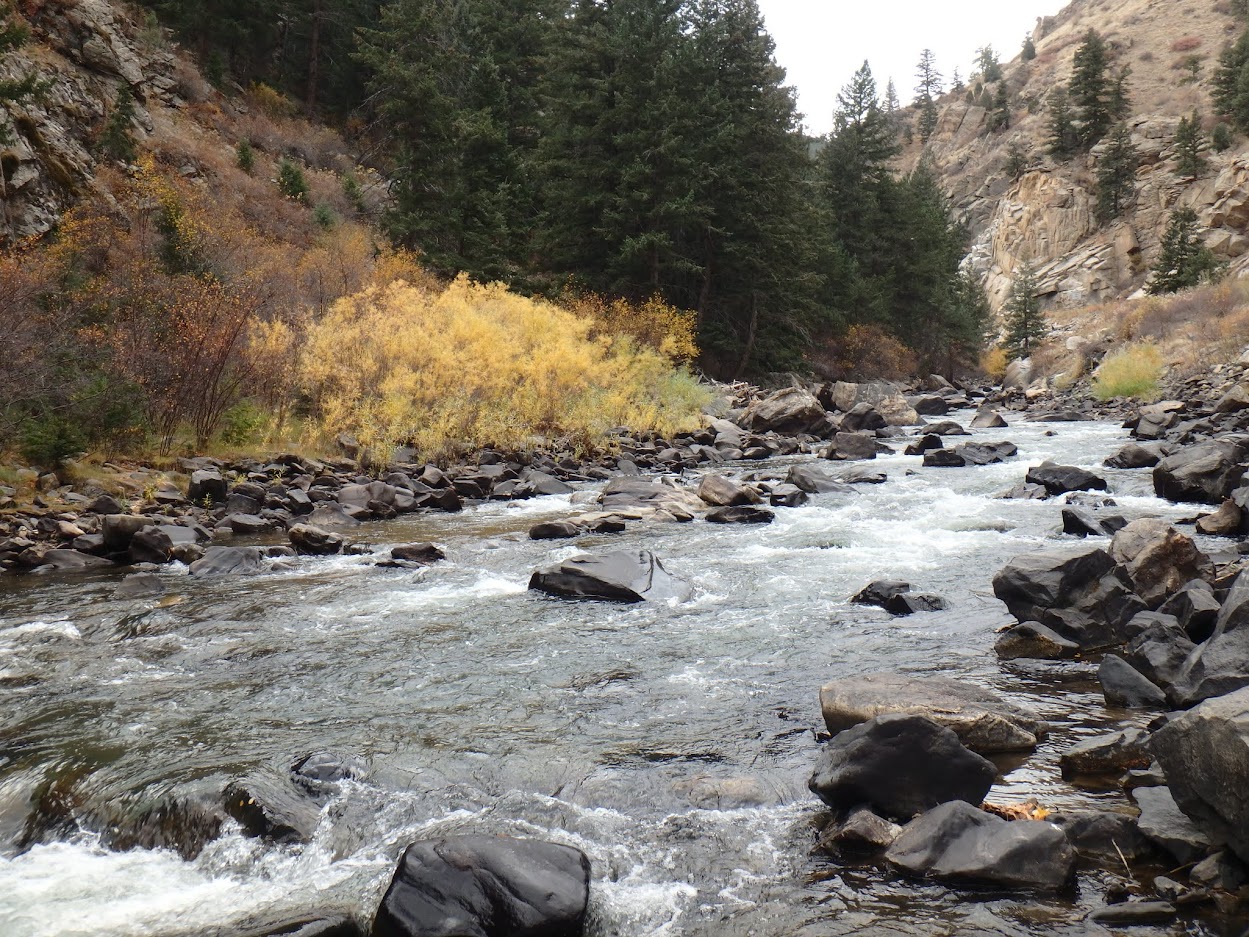 Nice Yellow Color on the Left

I arrived at a pullout near mile marker 263.0 at 11:15, and I rigged my Loomis five weight and stuffed my lunch in my backpack, before I hiked downstream along the narrow shoulder along US 6. The ever present large trucks and buses whizzed by, and several times I climbed over the guard rail to obtain a margin of safety. After a .4 mile walk I scrambled down a steep bank and used a jumble of large rocks as my stair steps. 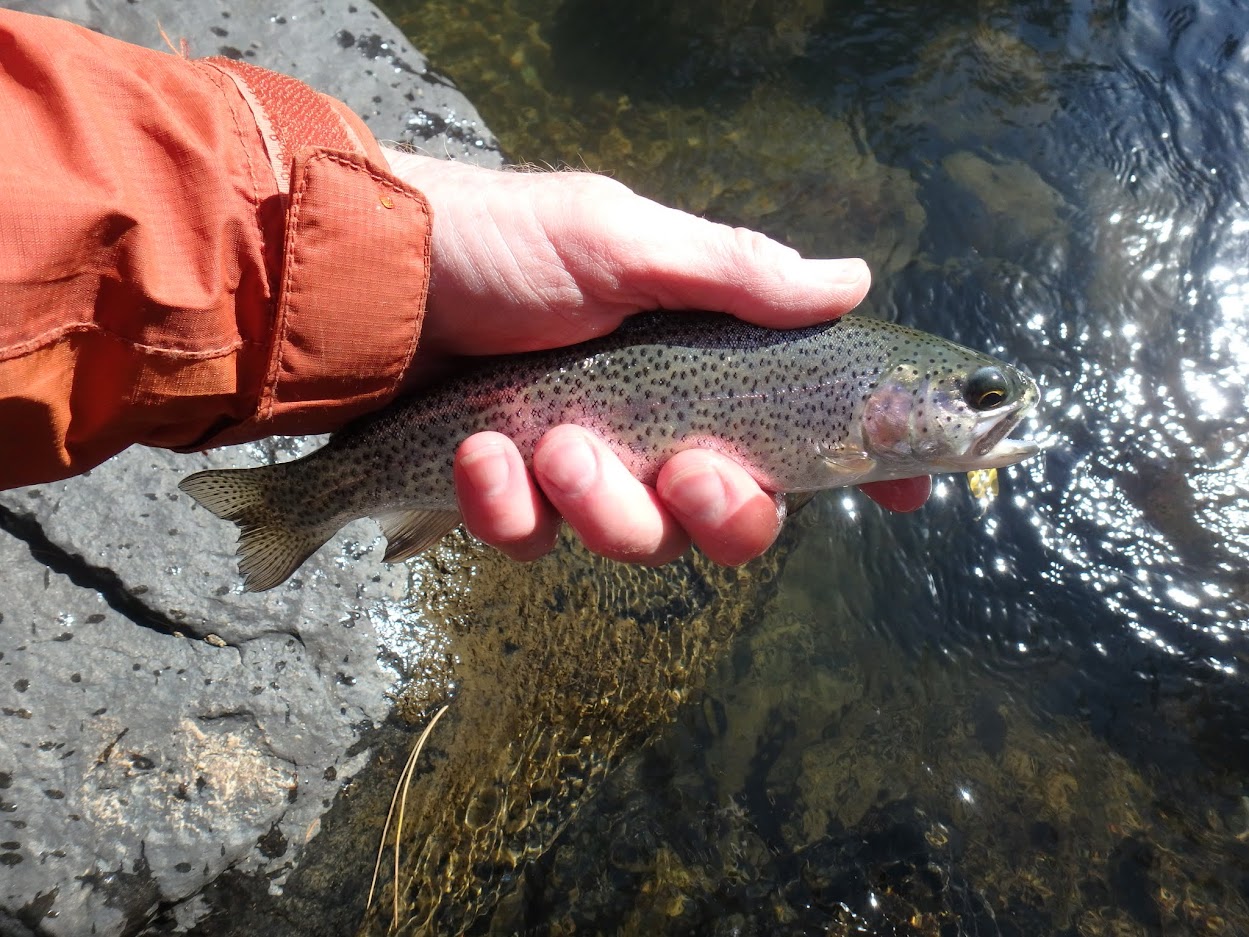 Jake’s gulp beetle was my workhorse fly on October 9 and 10, so I decided to stick with a winner and knotted a size 12 to my line. Once again the water was crystal clear and the flows were reported to be 42 cfs. The air temperature was 54 degrees, and I bundled up a bit with my long sleeved under layer, and I added my raincoat for a windbreaker. For my head gear I wore my billed New Zealand hat with ear flaps, and this proved to be a solid move. 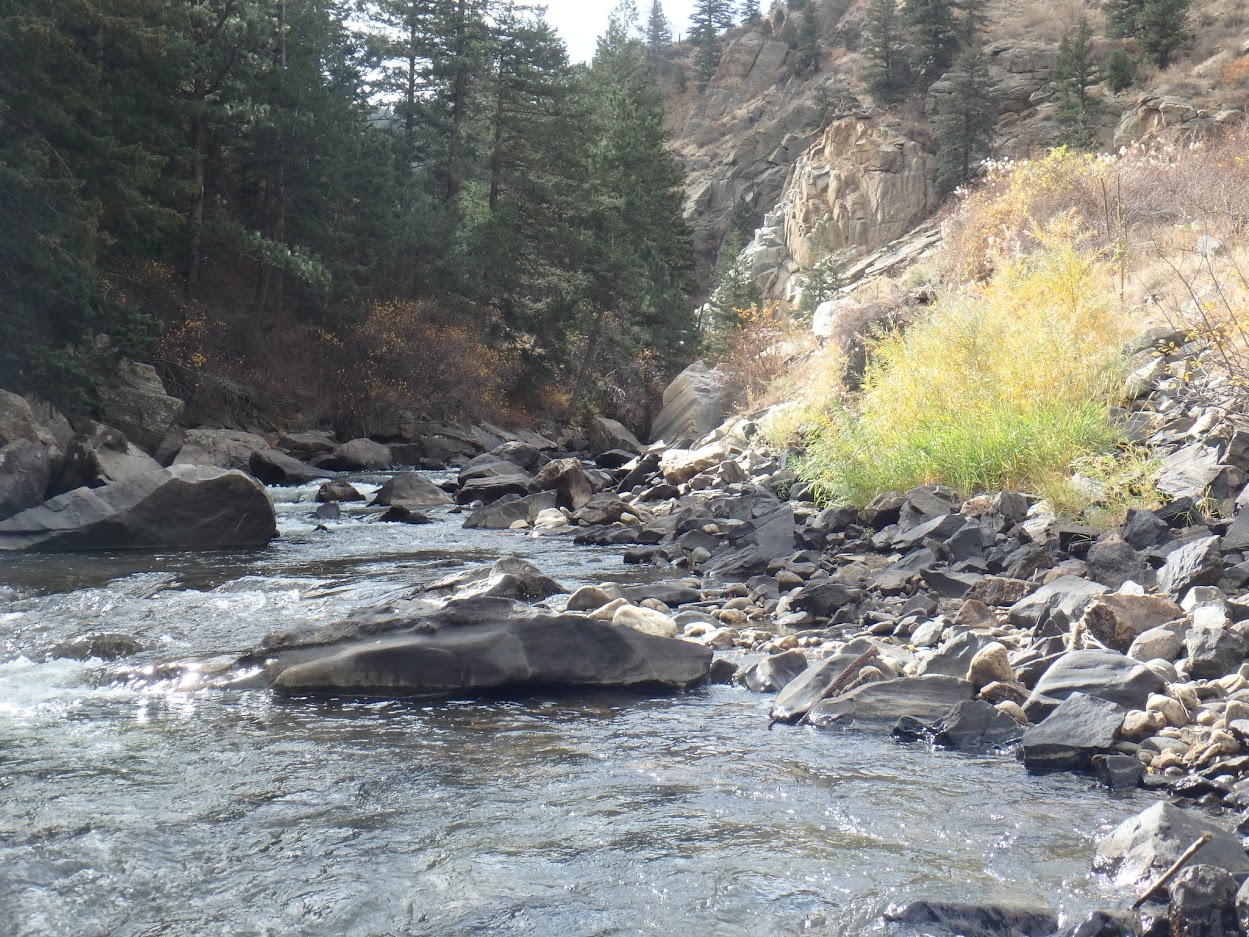 I began flicking the foam beetle to likely locations along the right bank, and I attracted interest almost immediately, but unfortunately the two early beetle eaters escaped the hook after a momentary connection. I was a bit concerned over this ominous start to my day on Clear Creek.

I maintained my optimism and progressed to the next attractive area only twenty-five feet beyond my starting point. Here a relatively wide smooth pool of moderate depth revealed itself on the opposite side of the creek. I recalled my success with downstream casts during my most recent visits, so I positioned myself toward the top of the pool albeit on the side of the stream that bordered the road. I shot a cast across and reached the fly line upstream and then executed several quick mends. This technique paid large dividends, as I landed one rainbow and three brown trout from the target area. The two long distance releases faded from my memory, and a jolt of optimism shot through my brain. 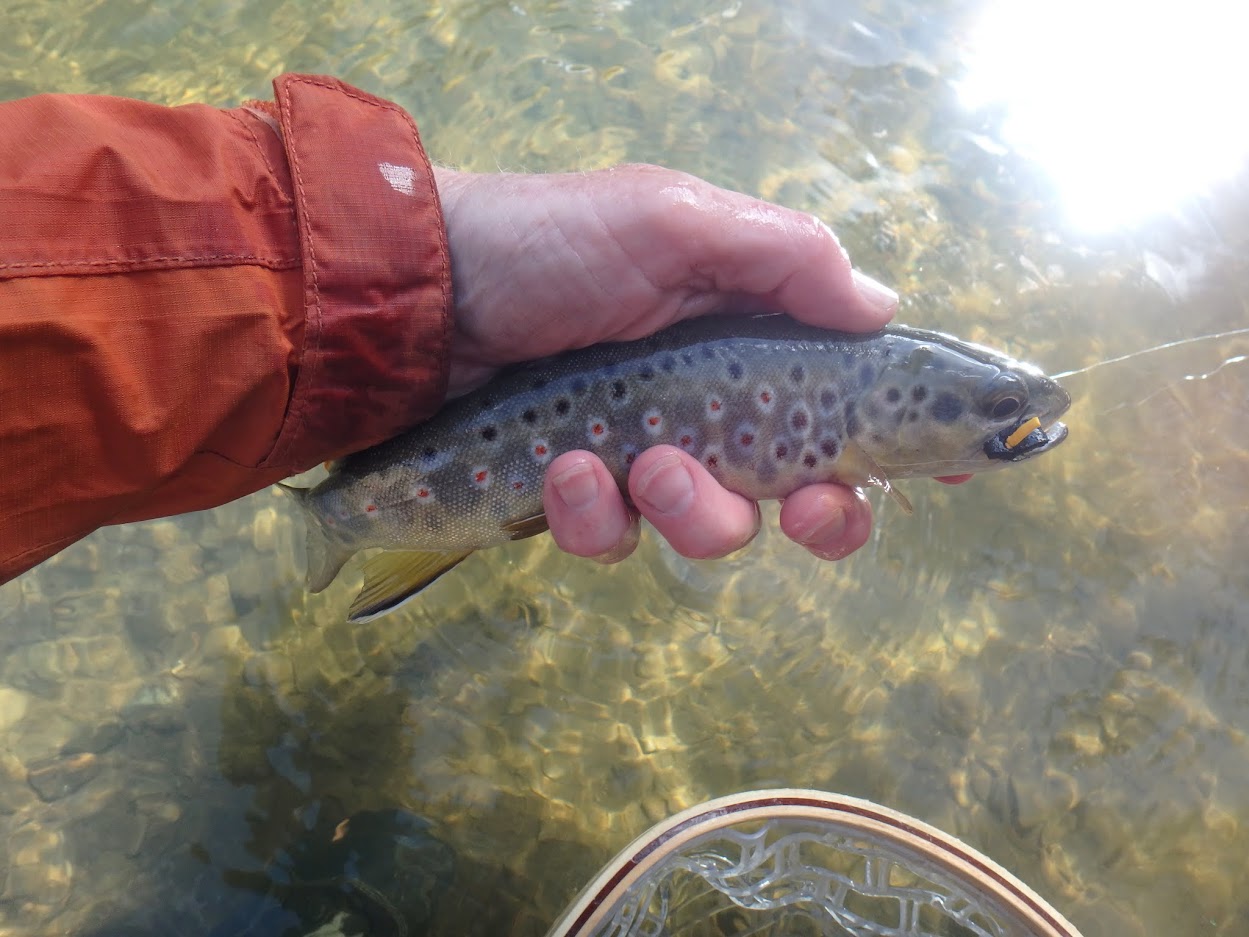 Good View of the Beetle

I broke for lunch at 12:15 and then continued on my way until I quit just short of the Santa Fe at 3PM. I primarily remained on the right bank, since the sunlight made it easier to follow my fly, but when I encountered juicy sections on the south bank, I repeated the across and downstream maneuver, that I described in the previous paragraph, and in most cases it produced. I estimate that the across and down technique delivered sixty percent of the fish that I landed, and the remainder resulted from the more conventional upstream cast. The air temperature never exceeded the sixty degree line, but the wind was not bothersome, and I was reasonably comfortable when in the shade or when clouds blocked the radiant heat from the sun. I did forego wearing my sungloves to avoid the cooling effect caused by evaporation. 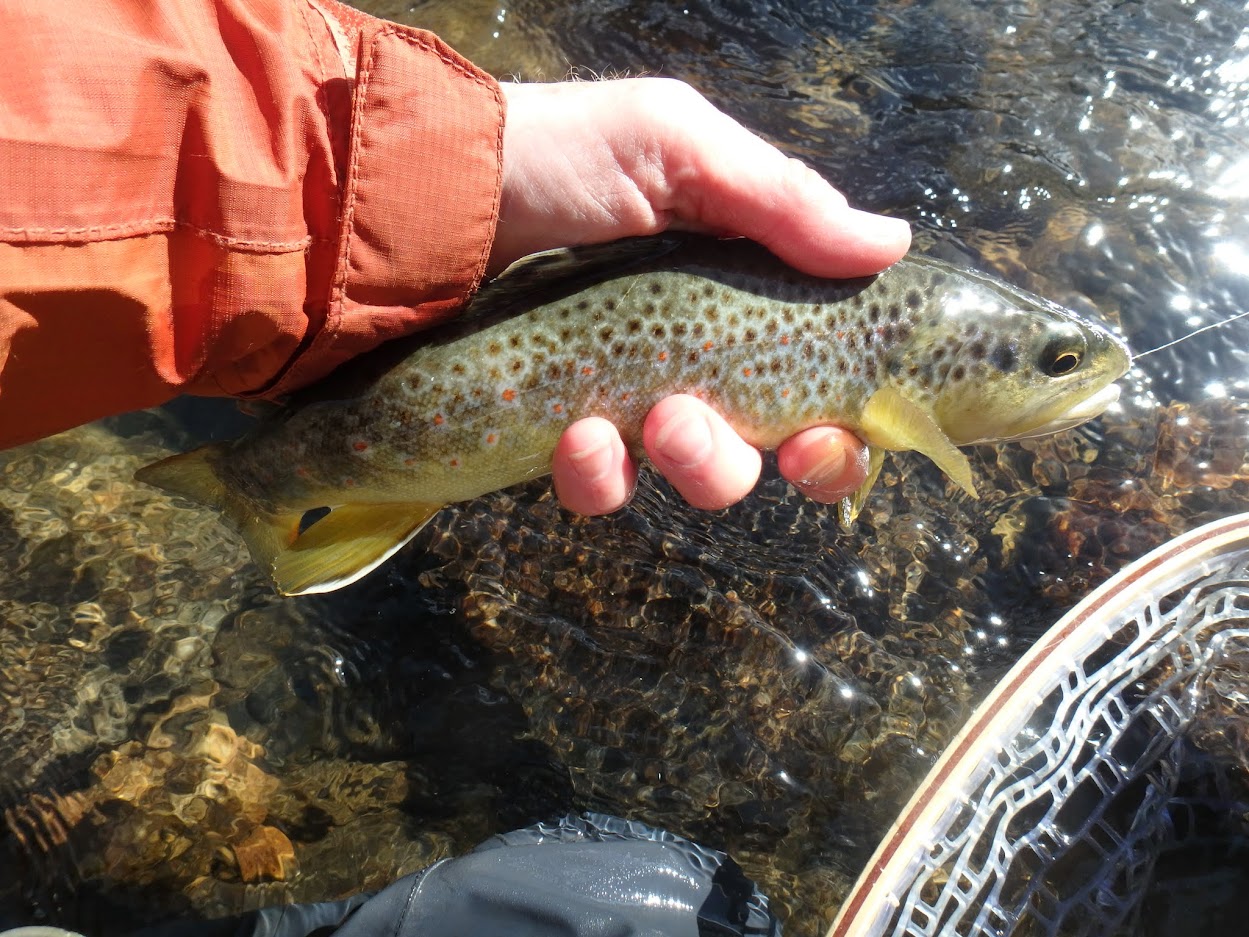 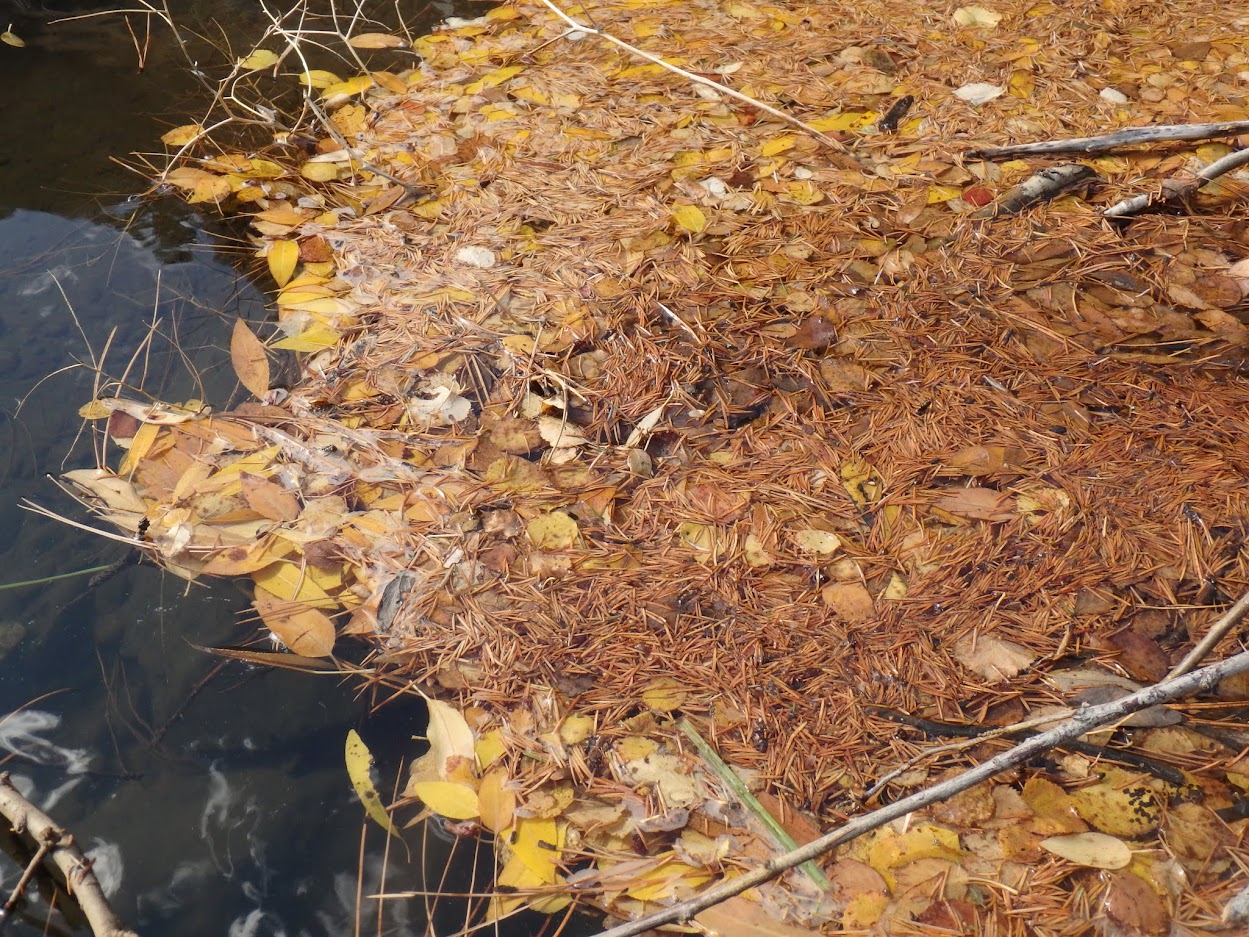 When I reached twenty-five on the fish counter, it was 2:45PM, and a man and young boy appeared along the bank above me. At first I was not certain what they were up to, but I did not spot any fishing gear. Eventually as I waded closer, I noted that the man had three large five gallon plastic buckets, and I assumed he was panning for gold. Fortunately the stream was relatively wide at this point, so I moved toward the middle and waded around him, while I prospected the likely holding spots on the south bank. The strategy worked, and I added three more fish to my total during this time period, and then I reeled up my fly and called it a day. 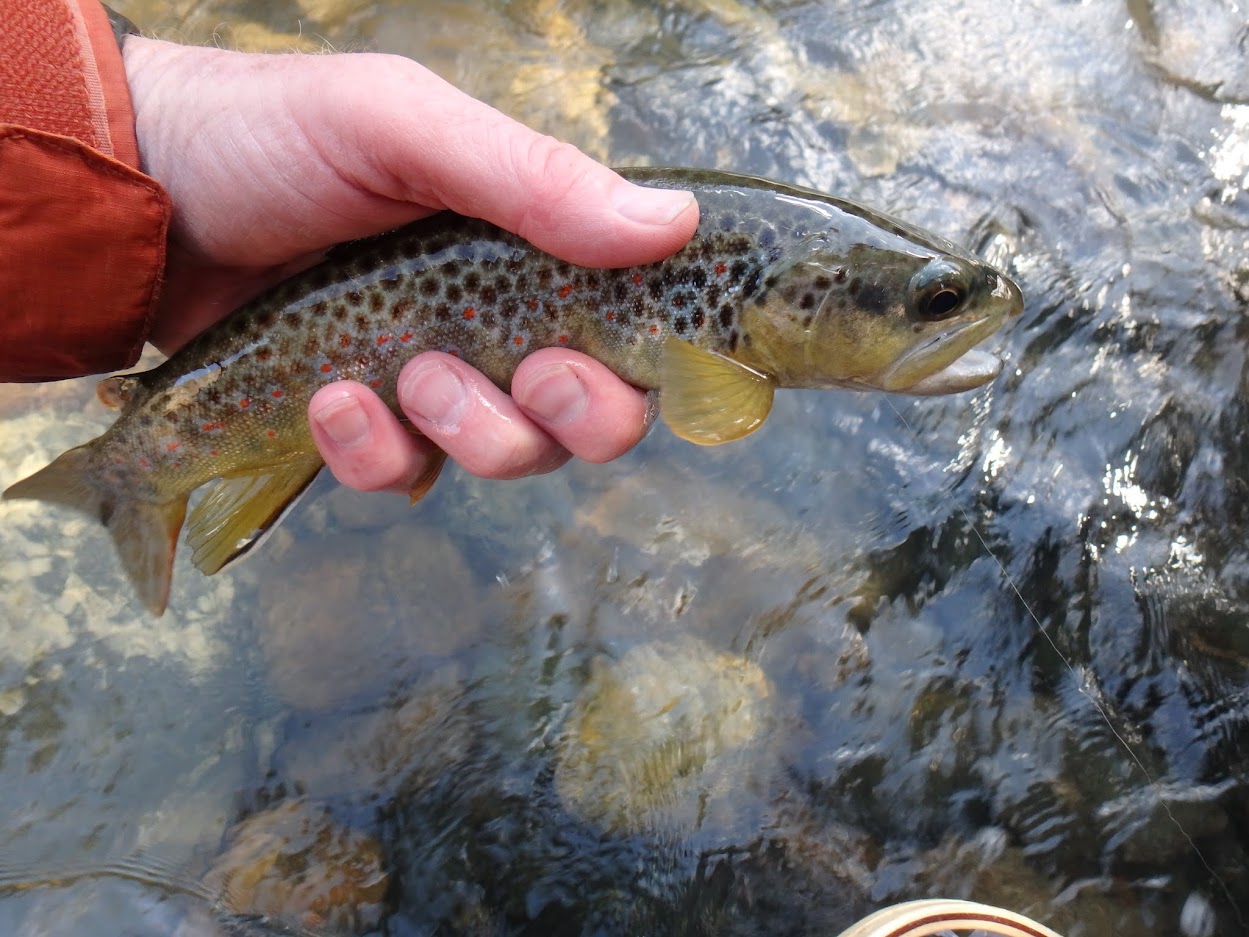 I Love the Clarity of This One

On Tuesday October 18 I had a blast. I landed 28 trout, and they all savored the foam beetle. The only negative was the three peacock body gulp beetles that I left in the mouths of Clear Creek trout. I restocked my fly box, but I fear that I will need to supplement my supply for the few remaining days of the 2016 season. If I continue catching fish during the late fall season, I will not mind producing a few more beetles.