The weather was outstanding, and I benefited from a short drive. Those were the two positives from my fishing trip on Thursday, October 17, 2019. Otherwise, my 2.5 hours on the water were forgettable. I experienced numerous fishless days in my fly fishing life, and today I landed three small brown trout barely over six inches, but the combination of slow fishing and stream mishaps placed my Clear Creek outing among the worst.

The flows were 45 CFS, and the water clarity was excellent. The air temperature reached the low seventies, and all three of these factors augured a pleasant day on the nearby front range stream. I chose to drive to the western end of the canyon beyond Golden, since I encountered more rainbow trout in that area in the past, and I attempted to hedge against brown trout spawning activity. 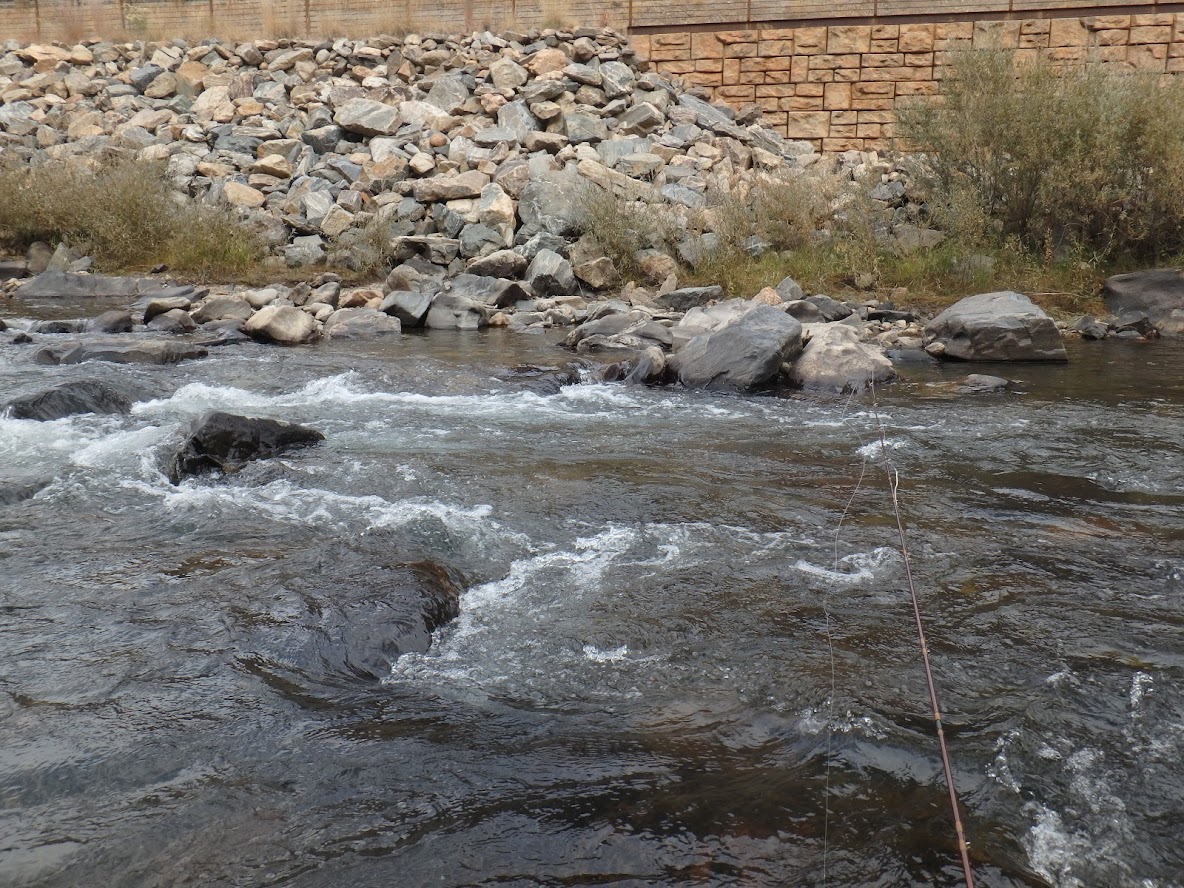 I ate my lunch, when I arrived at the parking lot along the stream, since it was already noon. Once I finished my black cherry yogurt cup, I assembled my Orvis Access four weight and gathered my gear for a few hours on the creek. I found an opening in the fence and cut directly to the stream and then waded along the edge for a decent distance to gain separation from the popular water near the parking lot.

I quickly knotted a size 12 Jake’s gulp beetle to my line and began to plop it in likely locations, but after thirty minutes with nary a look, I modified my approach. I removed the beetle and tied a peacock hippie stomper to my line along with a beadhead hares ear nymph and a salvation nymph. As I removed the hares ear from my fleece wallet, I momentarily last my grip and dropped the size 14 nymph in the water. This was the beginning of a series of adverse events that forced my early exit.

I moved upstream and featured the three fly lineup and eventually landed a brown trout that barely exceeded six inches. I carried doubts whether I would land additional fish, so I removed my sunglove to grip the small trout for a photo and placed the glove on a large boulder along the shoreline. With fish number one under my belt, I continued my progression and landed two additional browns of similar size to the first. One of the midget trout hammered the salvation nymph, and the other slurped the hippie stomper. The size of the trout was lacking, but at least the action was improving. 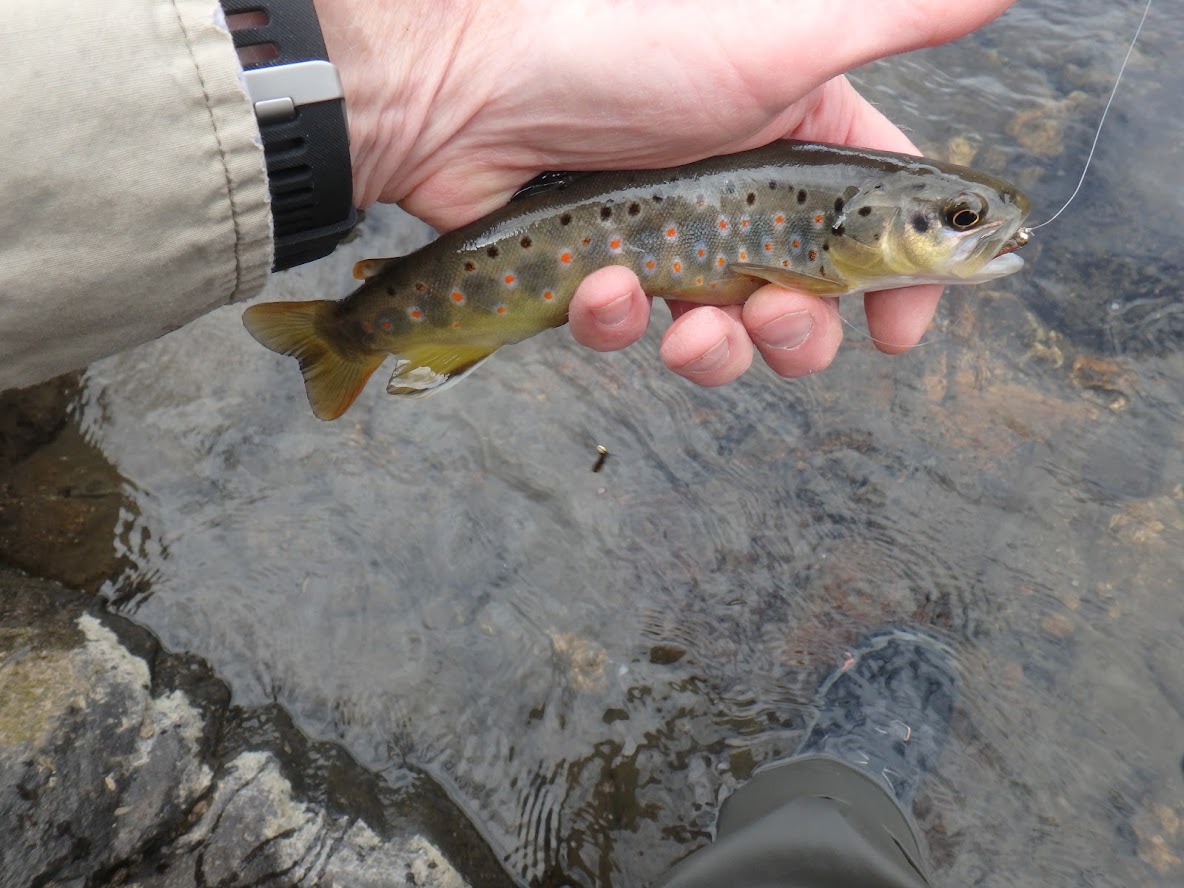 As these events transpired, I noticed that long pockets and riffles of moderate depth yielded the most evidence of fish, and I spotted an area along the far bank that fit the criteria of productive. I carefully waded to the center of the creek to position myself to make some across and downstream casts, and suddenly both my feet slipped on an angled underwater rock. I clutched my wading staff in my right hand, but it was useless, as I fell sideways and broke my fall with my left hand, which held my fly rod. The splash down was for only a moment, but my left arm went underwater up to my armpit, and ice cold water trickled over the top of my waders and seeped down to my feet. I cursed my ill fortune, but I was encouraged to realize that my rod remained in one piece, and I was not injured in any way. I mumbled to myself, that three tiny brown trout did not justify the hassle of getting wet. 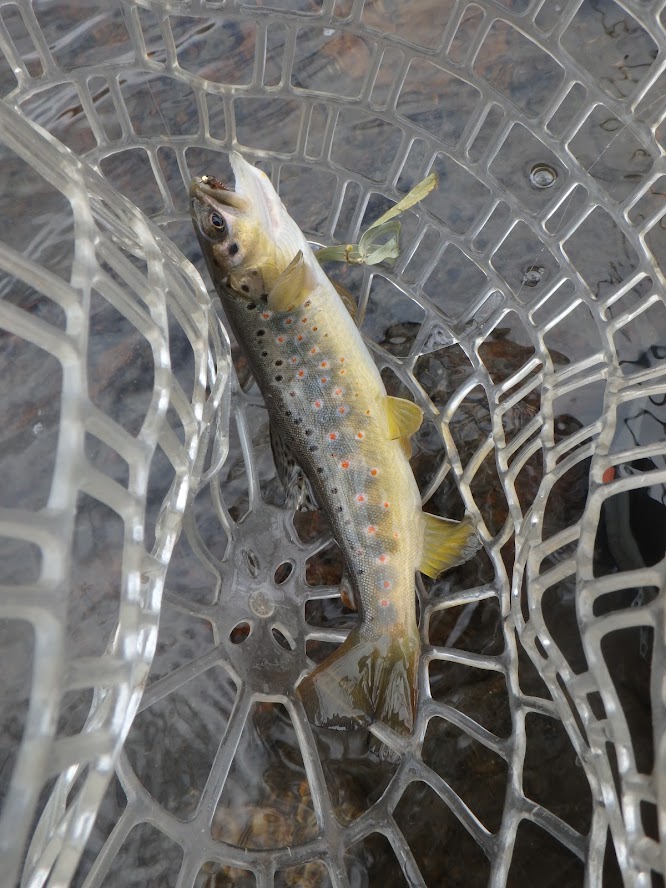 I attempted to resume fishing, but I quickly realized that the fly line was wrapped around both wading boots, and this forced me to shuffle to shore to unravel the snarl. Once the line was cleared, I sloshed upstream to resume casting. In a brief amount of time I saw the hippie stomper pause and executed a swift hook set, but the absence of a jaw caused the flies to catapult towards me. Before they could reach my body, they snagged the fly rod and created a monofilament nightmare. In a wet state I patiently unwound the entanglement, but when I was once again prepared to cast, I realized that I was only wearing a sunglove on my right hand. I remembered that I removed the left in order to grip the first fish for a photo.

I was not willing to write off a relatively new pair of sungloves, so I retreated to the scene of my first catch, and sure enough a left sunglove remained perched on a large boulder along the bank. I was closer to the upstream Peak to Plains bridge, than where I began, so I decided to fish to the bridge and call it a day. But my string of unfortunate events was not over. I found a promising long deep shelf pool, and as I raised my arm to cast, my reel released from the seat and plummeted into the creek. Apparently I had not tightened the lower clamp enough, and the reel worked itself loose during my time on the water. Fortunately this happened in shallow water, and I quickly recovered the newly washed reel and once again mounted it below the cork grip.

A couple momentary hook ups in the home stretch did not improve my outlook, so I waded below the footbridge to the bank next to the highway and then circled to the Peak to Plains Path and returned to the car. I retrieved my rarely used change of clothes from my fishing bag and removed a pile of wet apparel and made the short drive to my home.

Thursday was not one of my better outings. Wet wading was not on my agenda, and the three small brown trout did not compensate for the string of mishaps on October 17. Clear Creek continues to be my nemesis, and I need a break from the small stream west of Golden.