Tuesday on the Middle Fork of the South Platte River was a deeply humbling experience. I stayed in a motel in Salida to be close to my fishing destination, and then I wasted one of the dwindling mild fall days on a stream that was extremely low and that contained very skittish fish. I needed a bounce back experience on Thursday, but what were my options? After completing the nearly three hour drive to Salida and back on Monday and Tuesday I was not in the mood for another long trip, so that ruled out Eleven Mile Canyon; a destination that I had been considering for some time. I checked the new DWR graphs for the front range streams. The Cache la Poudre was running extremely low as was the North Fork of St. Vrain Creek, so I ruled them out. The Big Thompson retained flows in the 116 CFS range, and that is actually higher than I prefer. South Boulder Creek below Gross Reservoir displayed flows of 108 CFS. This is another example of a tail water with unseasonably high flows; however, it was within my desired range. It was a possibility. Next I checked Clear Creek, and flows were on the low side, but I decided to give it a try, as the cold narrow canyon would soon be out of play. South Boulder Creek involved a fairly strenuous hike, and after my back to back outings early in the week, I desired a more restful day. 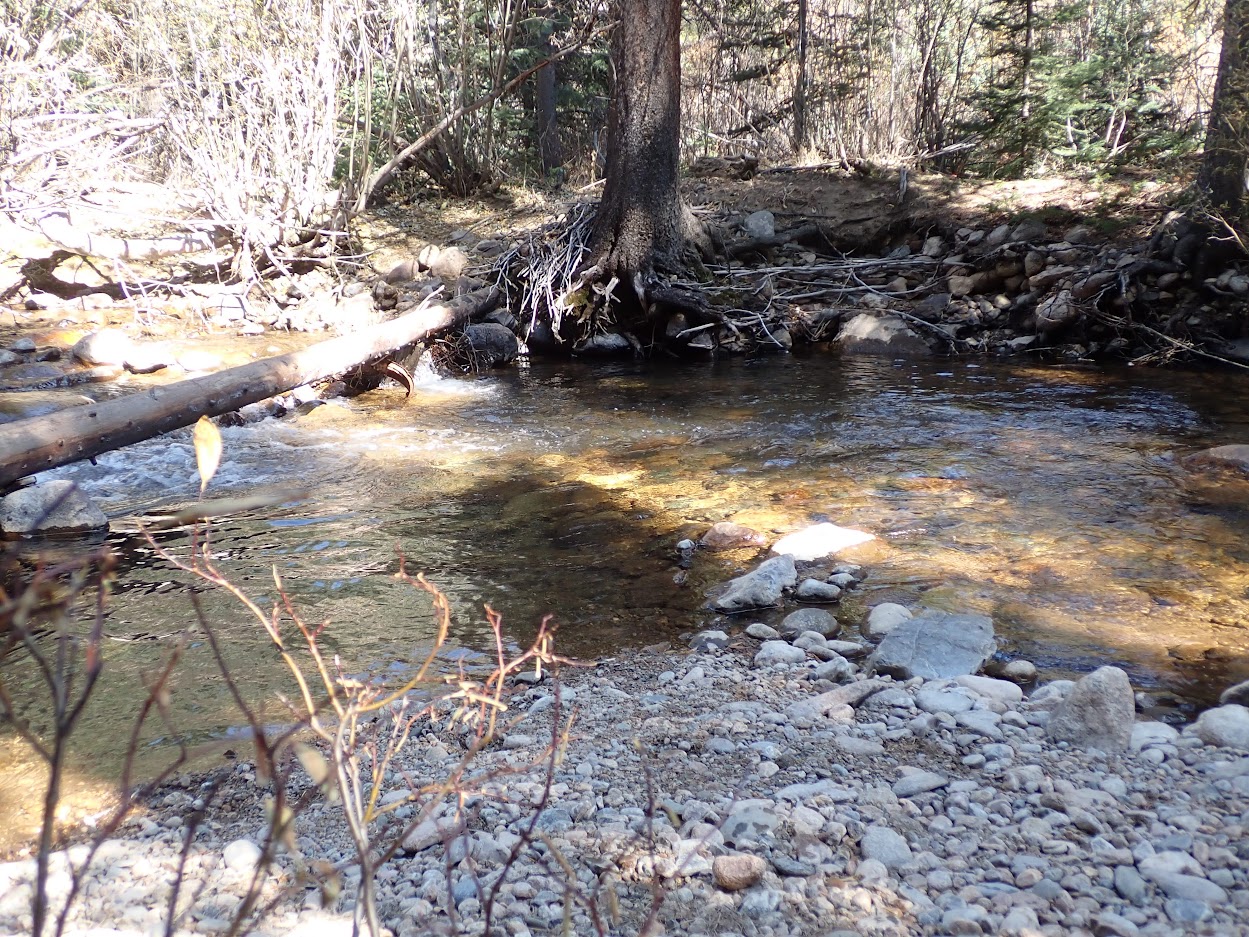 I arrived at my targeted pullout by 10:30AM, and after assembling my Orvis Access four weight I climbed into my waders and completed a .3 mile hike to the creek. The air temperature was 59 degrees, so I donned my light fleece hoodie, and I was mostly comfortable throughout my time on the stream. The creek was, indeed, running quite low; and I instantly had visions of a replay of Tuesday. I banked on the higher gradient and, thus, faster water creating more spots where fish could hide from predators, but I recognized the need for extreme stealth. 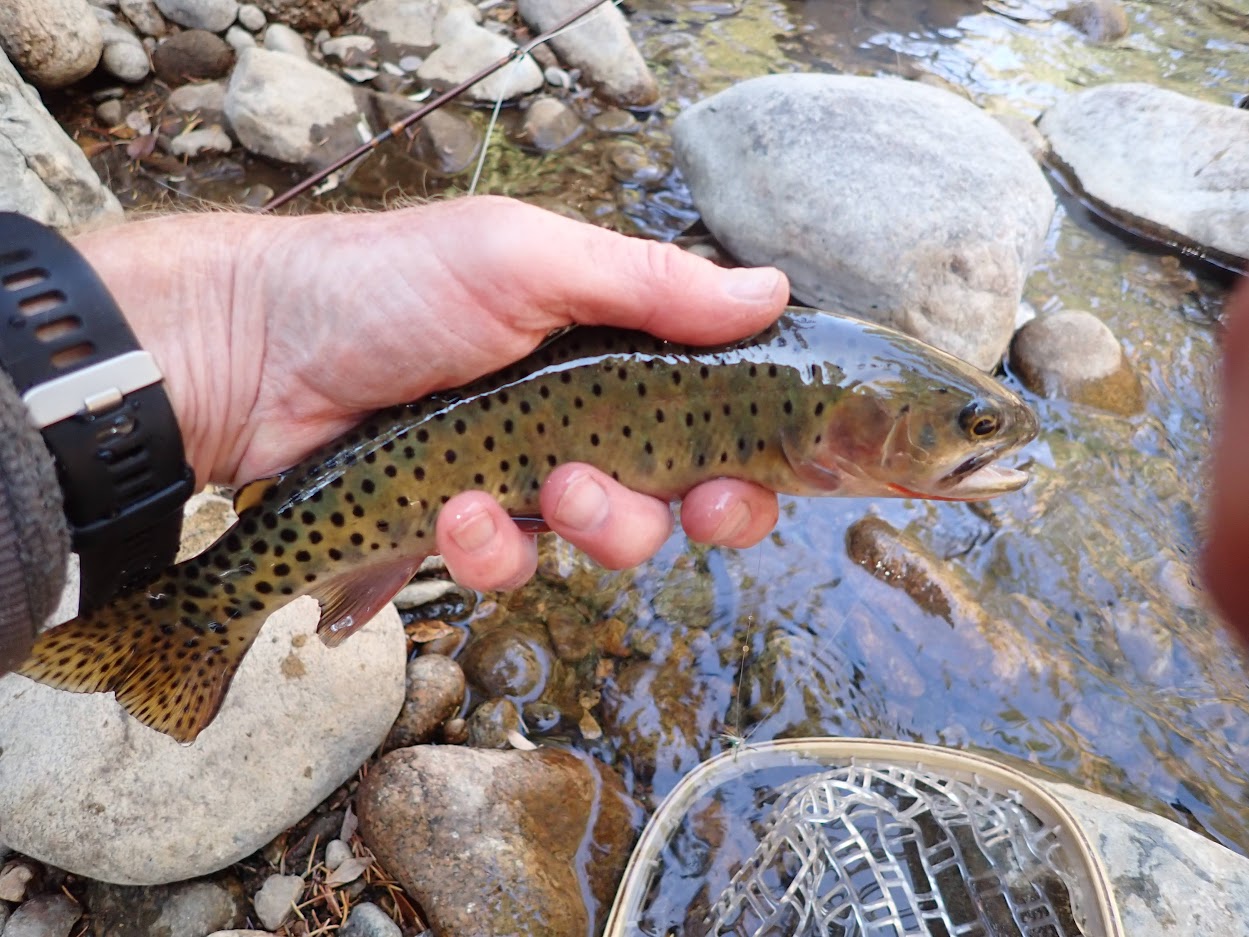 I began with a peacock hippie stomper trailing a size 18 beadhead pheasant tail nymph, and I approached a gorgeous little tailrace below a natural log dam. I flicked an abundant quantity of casts to the white foam area created by the small waterfalls and allowed the hopper/dropper to drift five feet, and finally on the eighth cast a small cutthroat trout nipped the stomper. Unlike Tuesday I was on the scoreboard early. I was not ready to call Thursday a comeback, and I was correct in exercising caution.

I quickly moved upstream, but at least thirty minutes elapsed before another small cutty smacked the hippie stomper. I landed number two in spite of a relatively tentative strike, and throughout this time quite a few refusals to the hippie stomper were sprinkled into the mix. I covered quite a bit of stream, and very few prime spots presented themselves, so it was unclear, whether I presented the wrong flies or whether the creek was sparsely populated in this stretch. 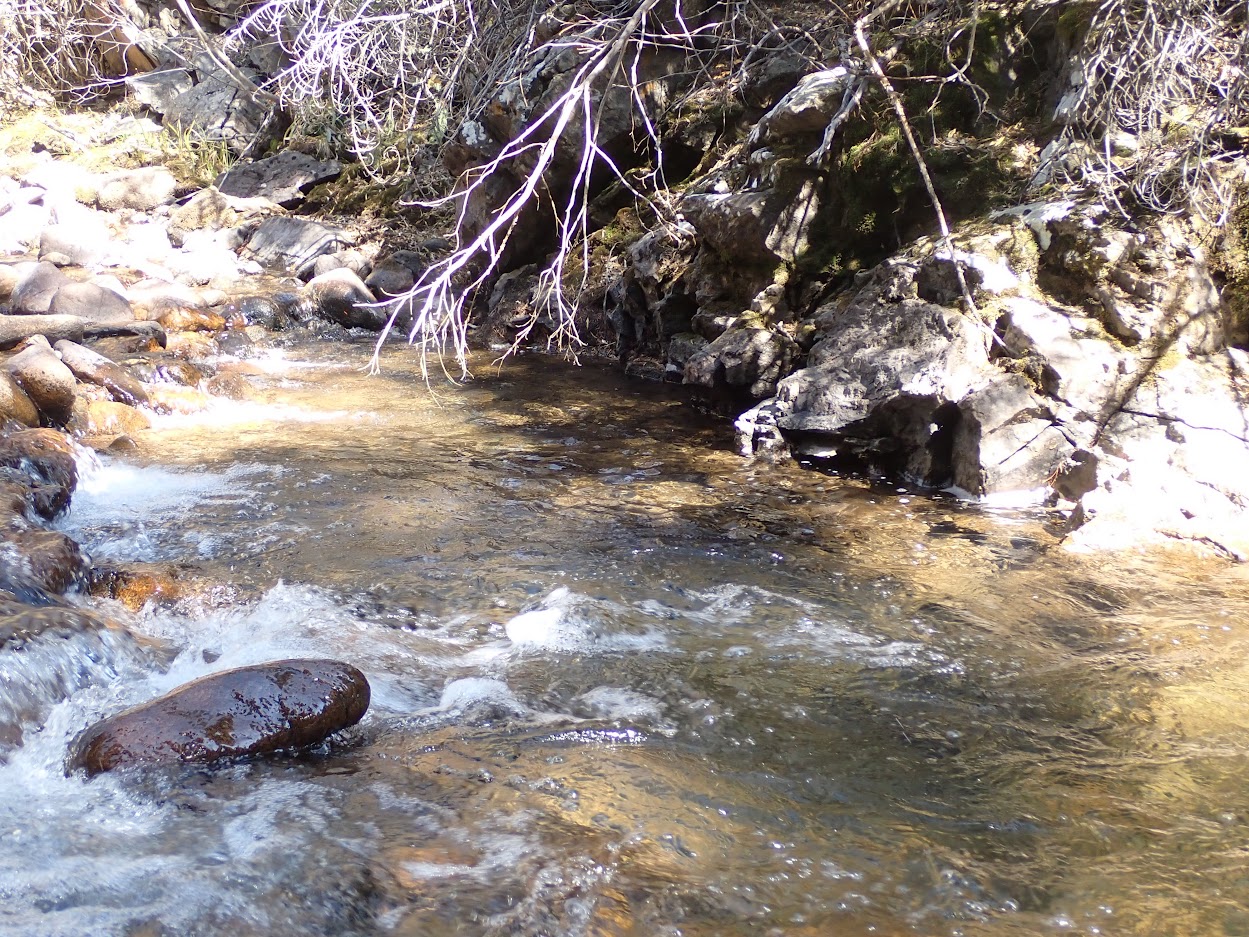 Alternating Shadows and Sunlight Were Tricky 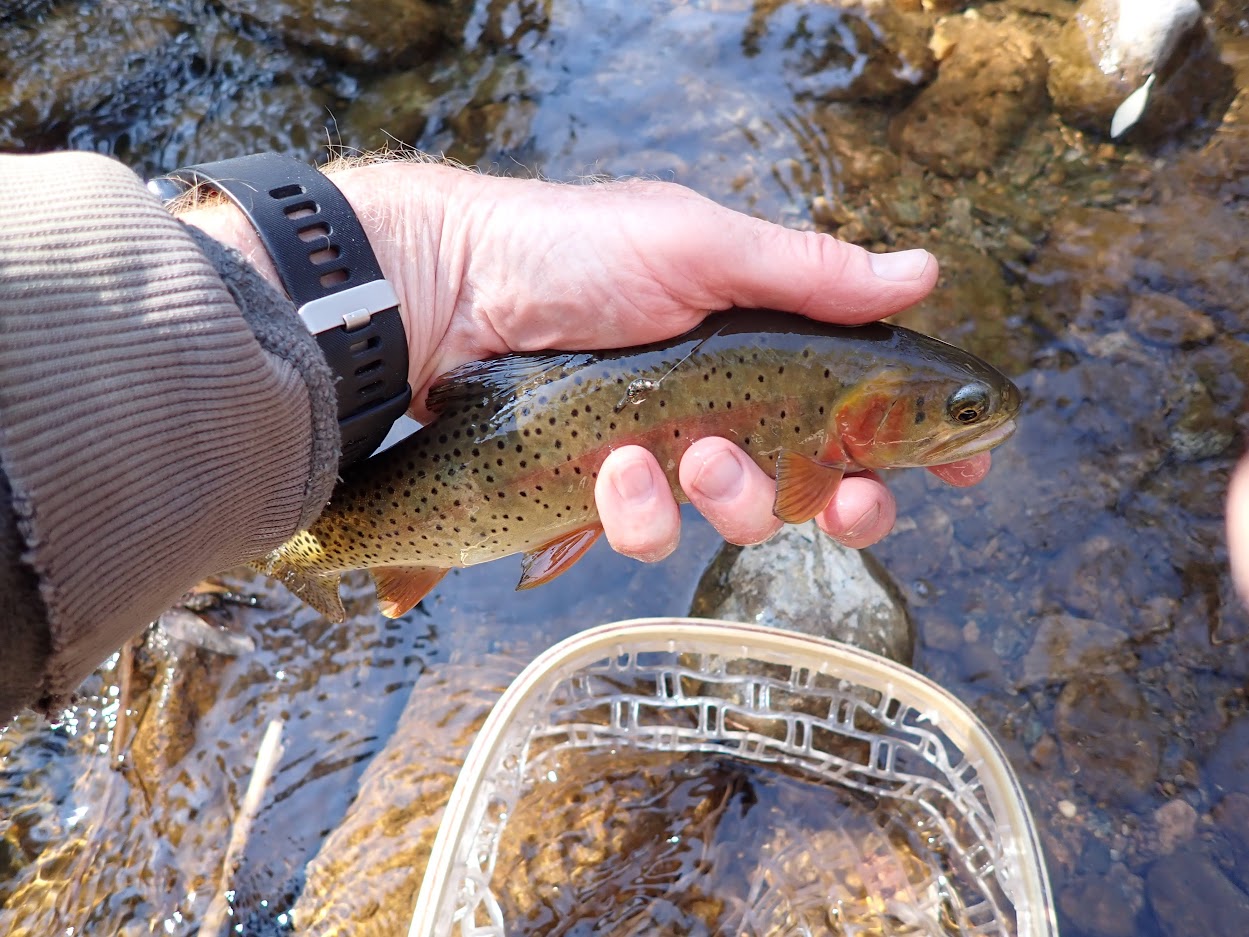 I decided to change out the trailing nymph and swapped the pheasant tail for a size 20 classic RS2. The move paid off somewhat, as I landed a pair of cutthroats that chomped the small RS2, but this was in spite of prospecting some very attractive locales with no interest from the resident trout. It was around this time that I began to observe quite a few scattering fish either from my clumsy approach or the plop of the hippie stomper and nymph. I concluded that a lighter presentation would be more effective, and I switched to a pale olive stimulator. The heavily hackled size 14 was ignored, and in a location where I sighted several fish I cycled through a parachute ant, Jake’s gulp beetle, and bionic ant. None of these offerings generated any interest, so I returned to the hippie stomper, and I reprised the RS2. 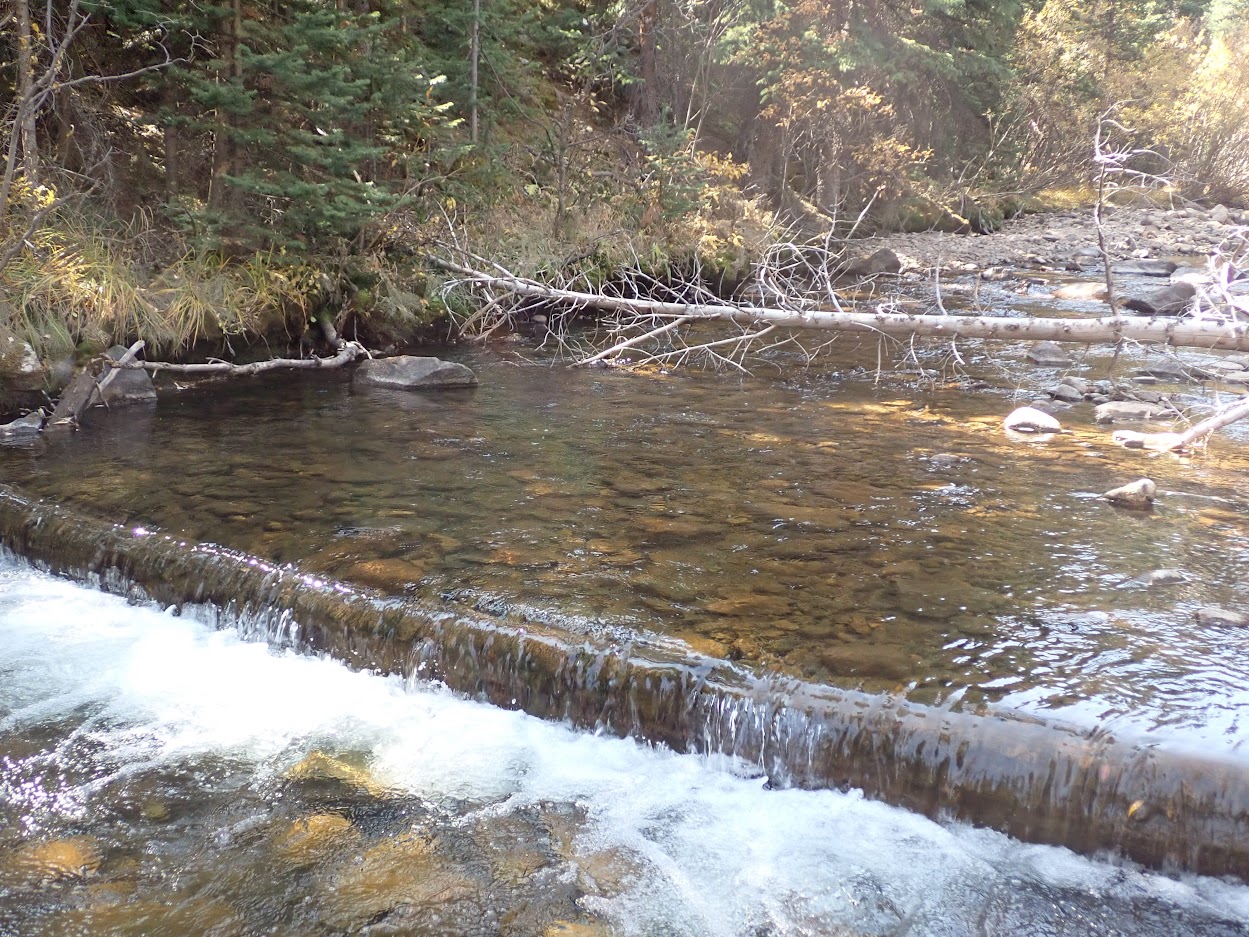 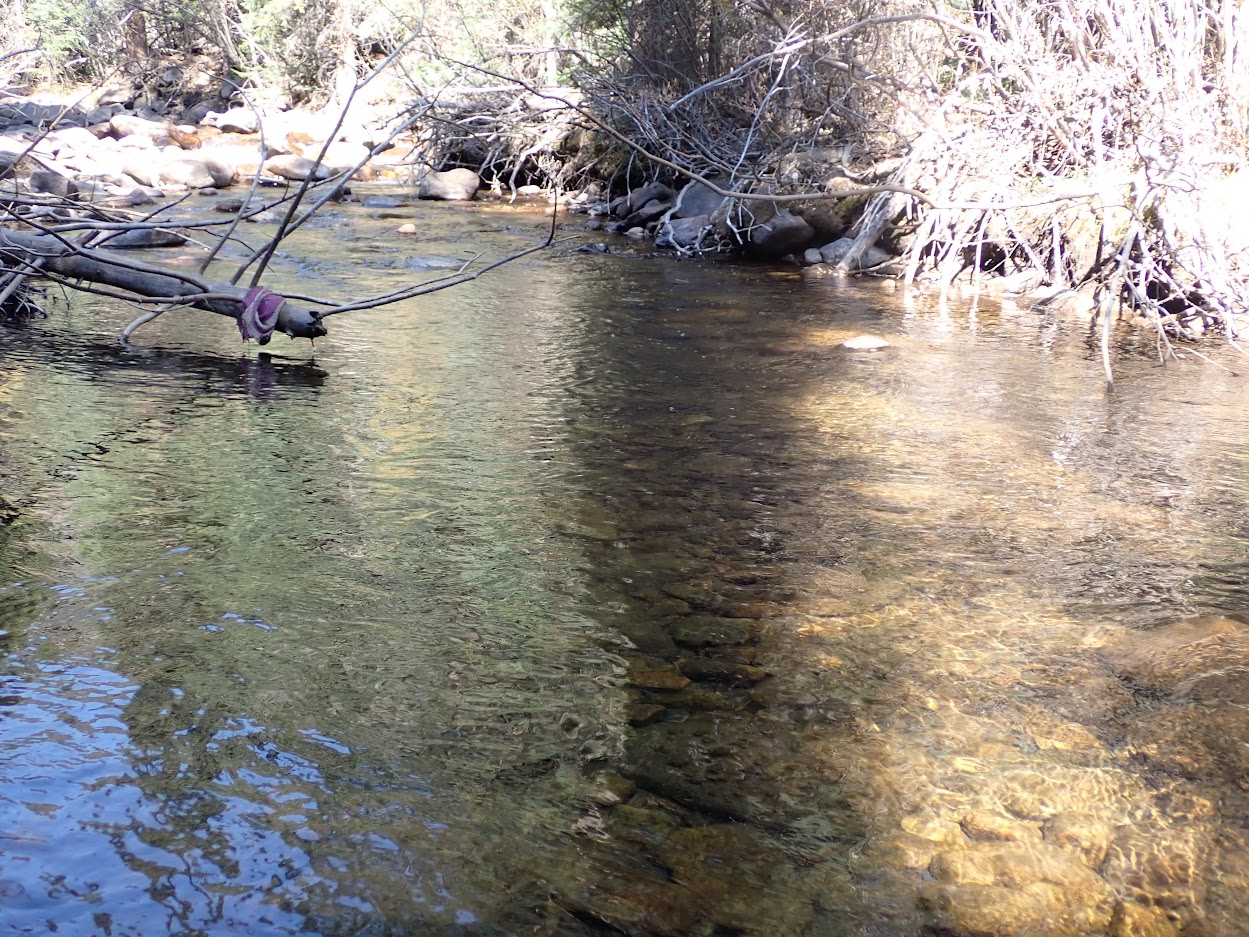 Where Is Waldo Trout?

As the sun rose higher in the early afternoon sky, it became easier to sight trout, and I used this to my advantage. I skipped shallow marginal pockets and only paused at obvious holes with greater depth. I scanned the water intently before casting, and in many cases I was able to spot a cutthroat to target. This process greatly elevated the probability of success and eliminated wasteful shotgun casts that were spooking the skittish fish. Perhaps this technique would have worked to my benefit on Tuesday on the Middle Fork of the South Platte River? 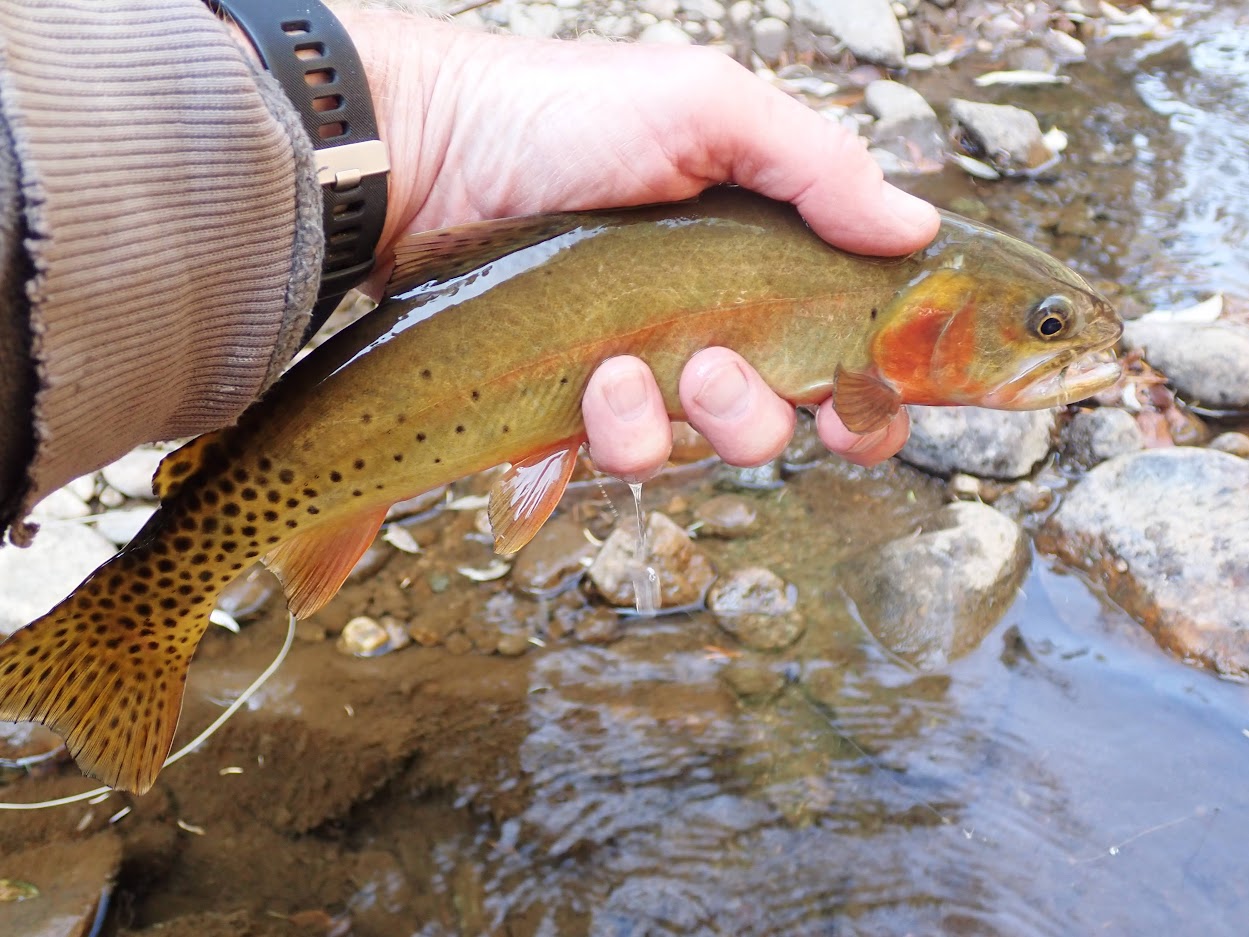 At any rate I approached a nice deep, smooth pool, where I could see several fish hugging the bottom. These fish elevated to the hippie stomper, but I could not induce them to close their mouths on my offering. I noted a few very small mayflies in the air above the stream, and I decided to try a CDC blue winged olive. I fired a few casts to the run that fed the pool, and two stunning cutthroats sipped the small mayfly imitation. My ability to sight two fish and then select a fly that fooled the fussy eaters was very gratifying. I vacated the pool and moved up the narrow creek to an appealing deep run, and before I approached too closely, I paused to study the rocky streambed. 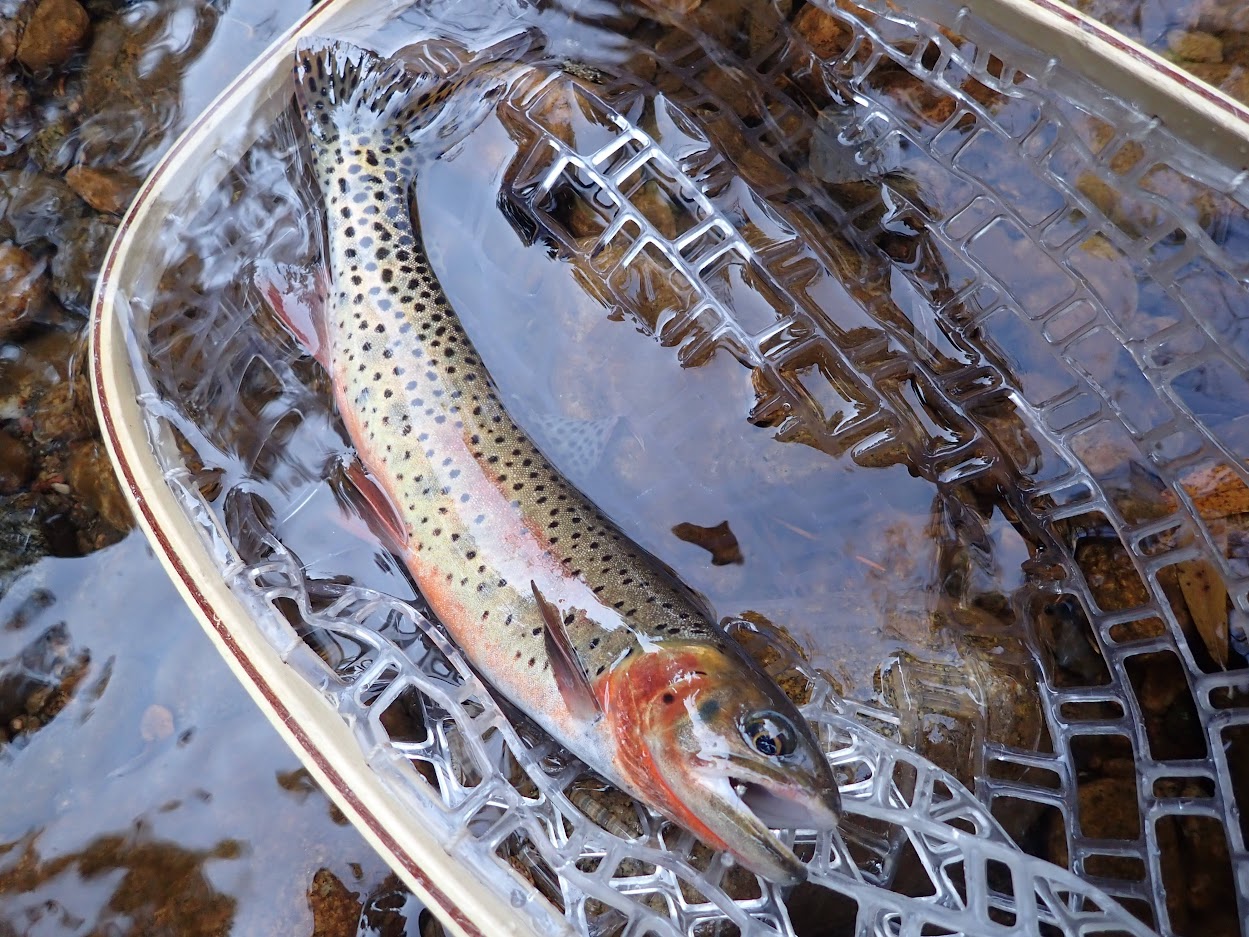 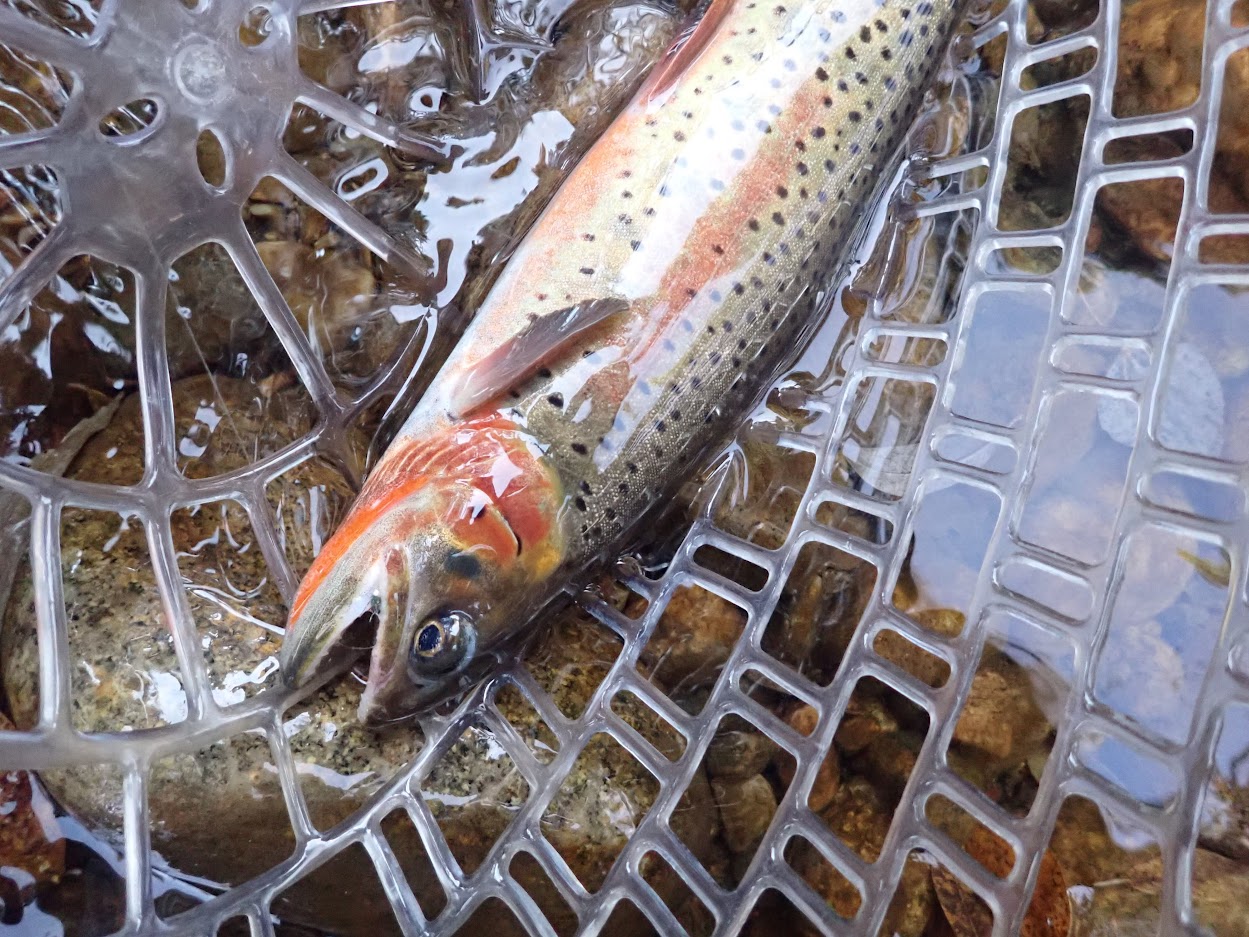 The caution paid off, when I spied what appeared to be a fine cutthroat trout in the eleven to twelve inch range. I stooped down low and stripped out some line and lobbed some casts above my target trout, and on three consecutive drifts, the cutty rose and then dropped back to its holding lie. In one instance the fish literally pressed its nose against my fly, and not lifting and pulling the fly away required the utmost restraint. I paused for a bit to sop moisture from the wing, and then I dipped the size 22 fly in dry shake. After some vigorous shaking action I removed the fly and flicked off any residual powder or crystals and then fluffed the wing, so that it portrayed a nice wide profile. While this fly preparation transpired, I rested the water, and now I was ready for another approach. I flicked the fly upstream and to the left, and when it drifted within six inches of the trout, it curled sideways and then in an exceedingly leisurely manner it sipped the tiny tuft of a mayfly. This scenario was easily the highlight of the day, and I may have shouted a few words of congratulations to myself. 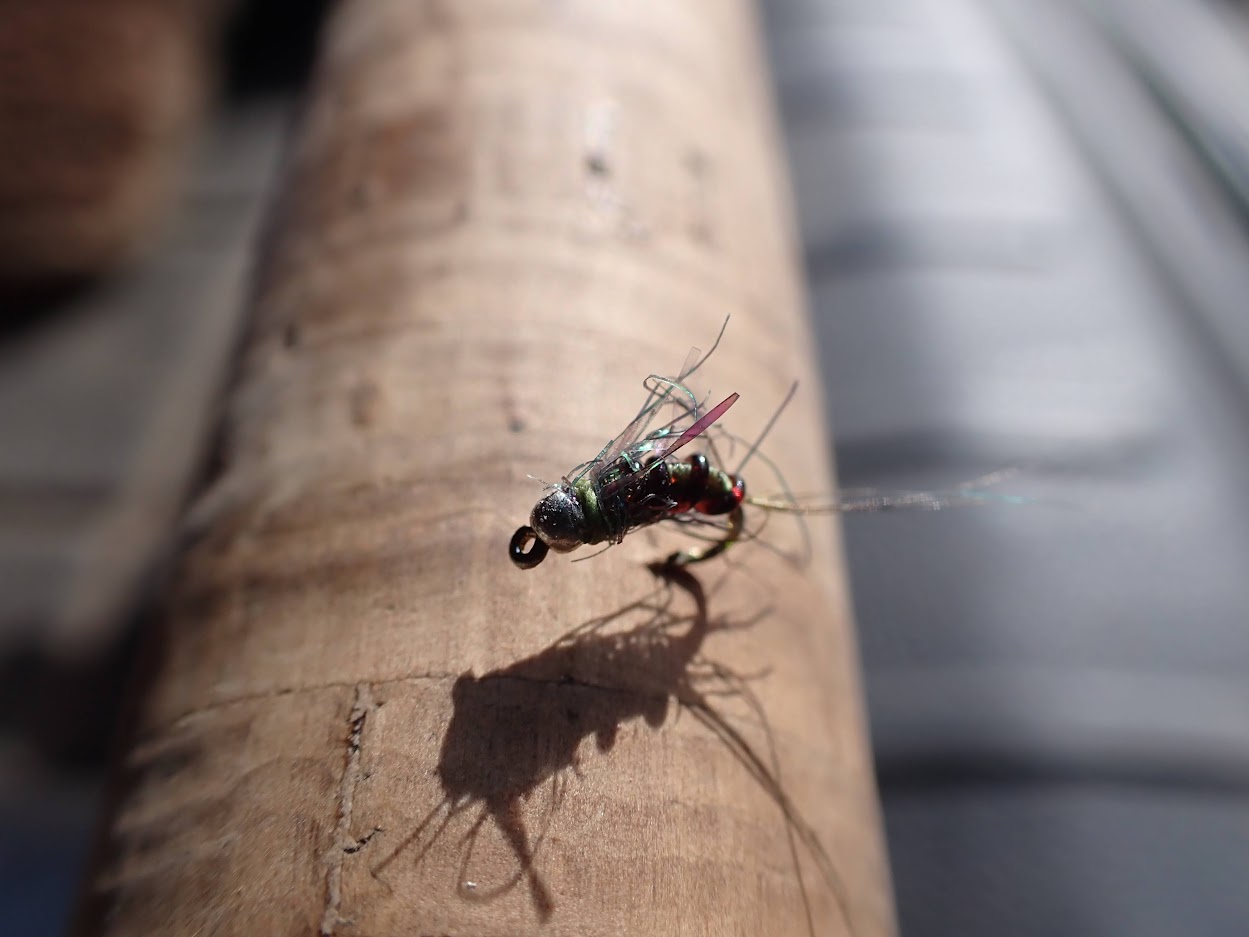 I continued for a bit more with the CDC olive, but the nature of the creek transformed into a narrow tumbling pocket water stretch, so I reverted to the hippie stomper and added a size 20 super nova baetis. I tied these Juan Ramirez patterns during my surgery recovery and noticed a pair in my fleece wallet. I continued for another forty-five minutes by prospecting the dry/dropper, and I boosted the fish counter to ten. The last three trout nabbed the super nova baetis, and it seemed that a lifting action encouraged the takes. 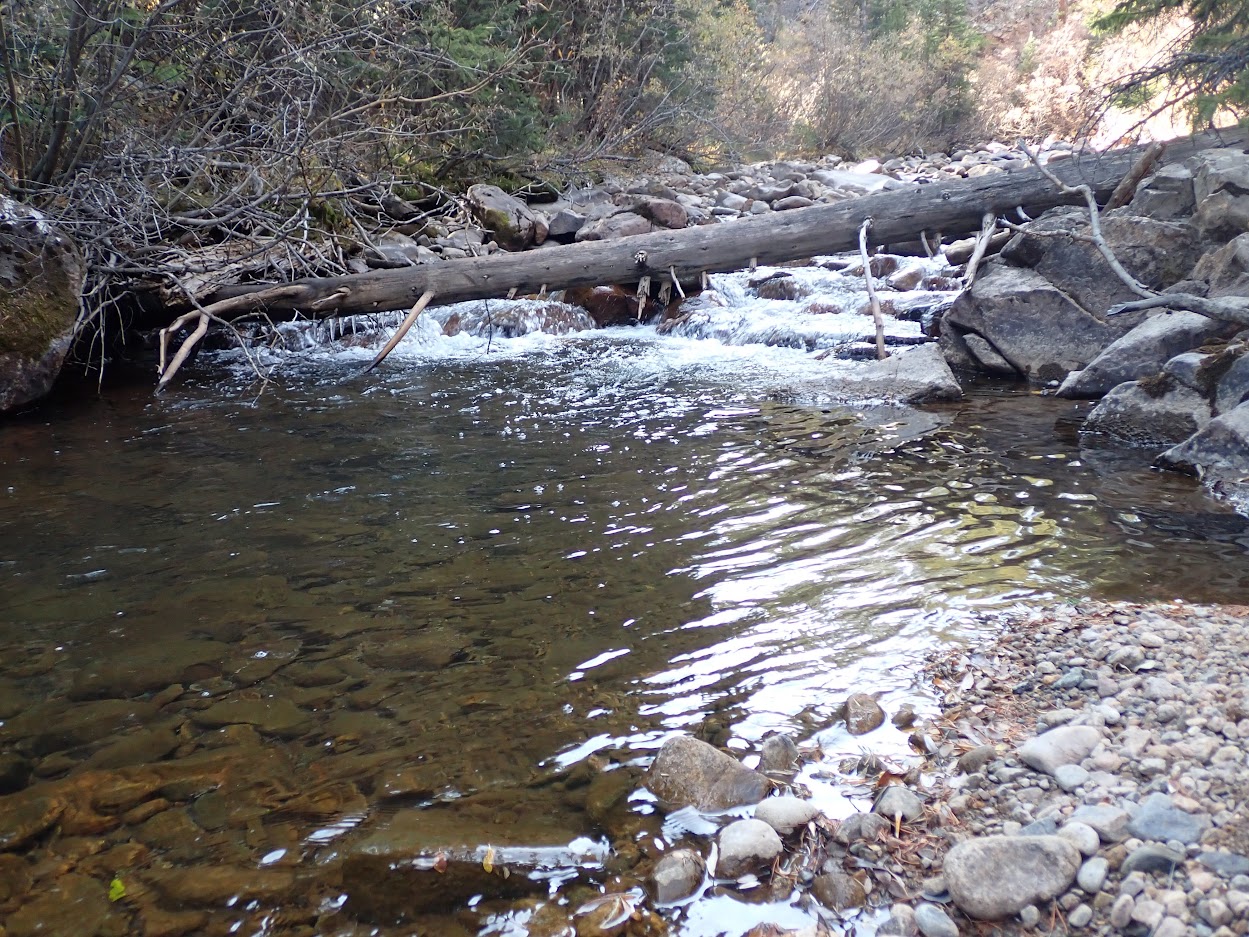 The Last Trout Came from This Prime Location

Number ten came from a nice deep hole just below a single log dam, and my watch displayed 3:30. The shadows were lengthening over the small stream, and the water ahead did not seem especially appealing, so I hooked the super nova to my rod guide and clambered up a steep bank and then picked my way through a sparse forest, until I reached the road. I was .7 mile above my parking space, and that translated to covering approximately a mile of Clear Creek. 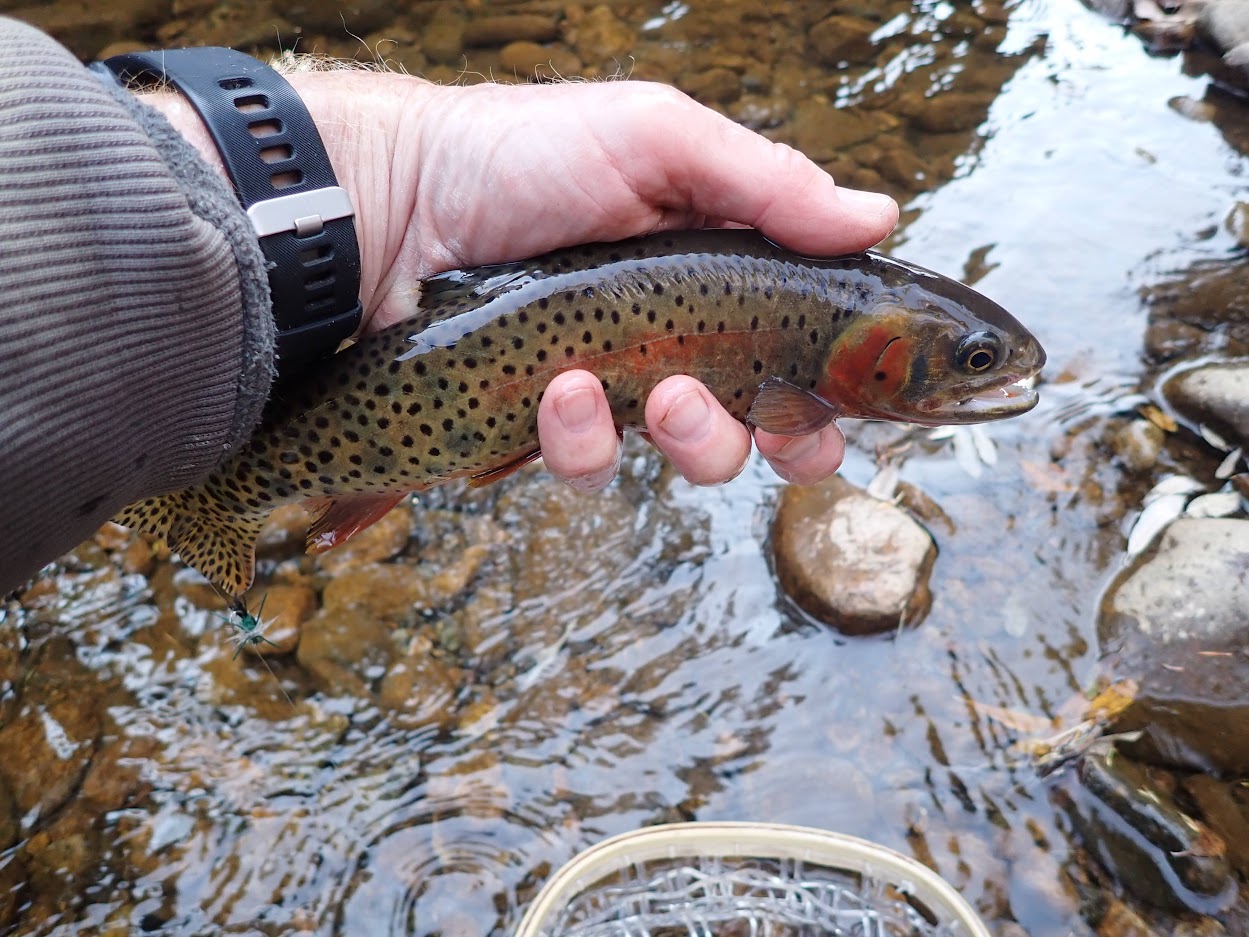 Thursday was a respectable day, and it taught me the importance of being observant and remaining flexible. Instead of continuing to flail the water with blind casts, I adjusted my approach to sight fish. The modification to my standard fishing style paid off with a double digit day on a clear and very shallow mountain creek. The quality of the cutthroats was outstanding, as each displayed some variation on the watermelon color scheme. The light olive body color was comparable to the skin and rind, and the speckles portrayed the seeds, and the subtle pink spots on the side matched the edible flesh.