Once again I was a victim of the allure of fishing close to home. Several times each season I make the short drive to Clear Creek in the canyon just west of Golden, CO, and I anticipate some easy number padding fly fishing. Rarely do the results follow this script, and today was not an exception.

The temperature when I began at noon was in the low seventies, and the creek was flowing along slightly higher than normal for late September at 61 CFS. Since I arrived at 11:45AM, I gobbled my small lunch, before I hiked to my starting point along the creek. I chose my Orvis Access four weight; and I began my day with a tan pool toy hopper, beadhead hares ear nymph and beadhead pheasant tail nymph. 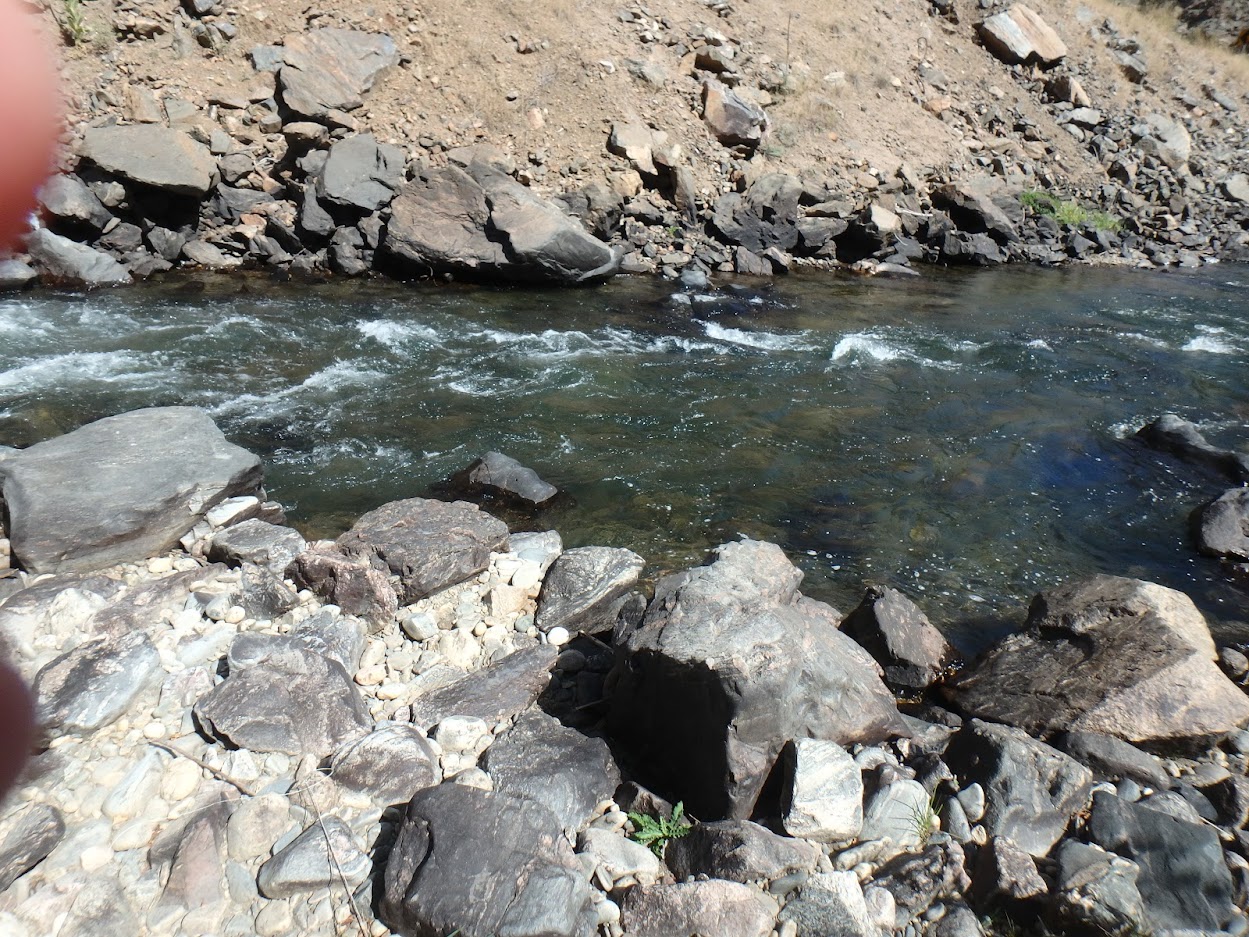 On the first cast in a tantalizing shelf pool a twelve inch brown trout elevated and crushed the pool toy hopper. Was my day destined to be this easy? Stay tuned. I paused to photograph the larger than average catch for Clear Creek, and then continued and notched two more trout on the hopper within the first thirty minutes. Perhaps today was going to be an exception to the prevalent pattern of selective small trout. 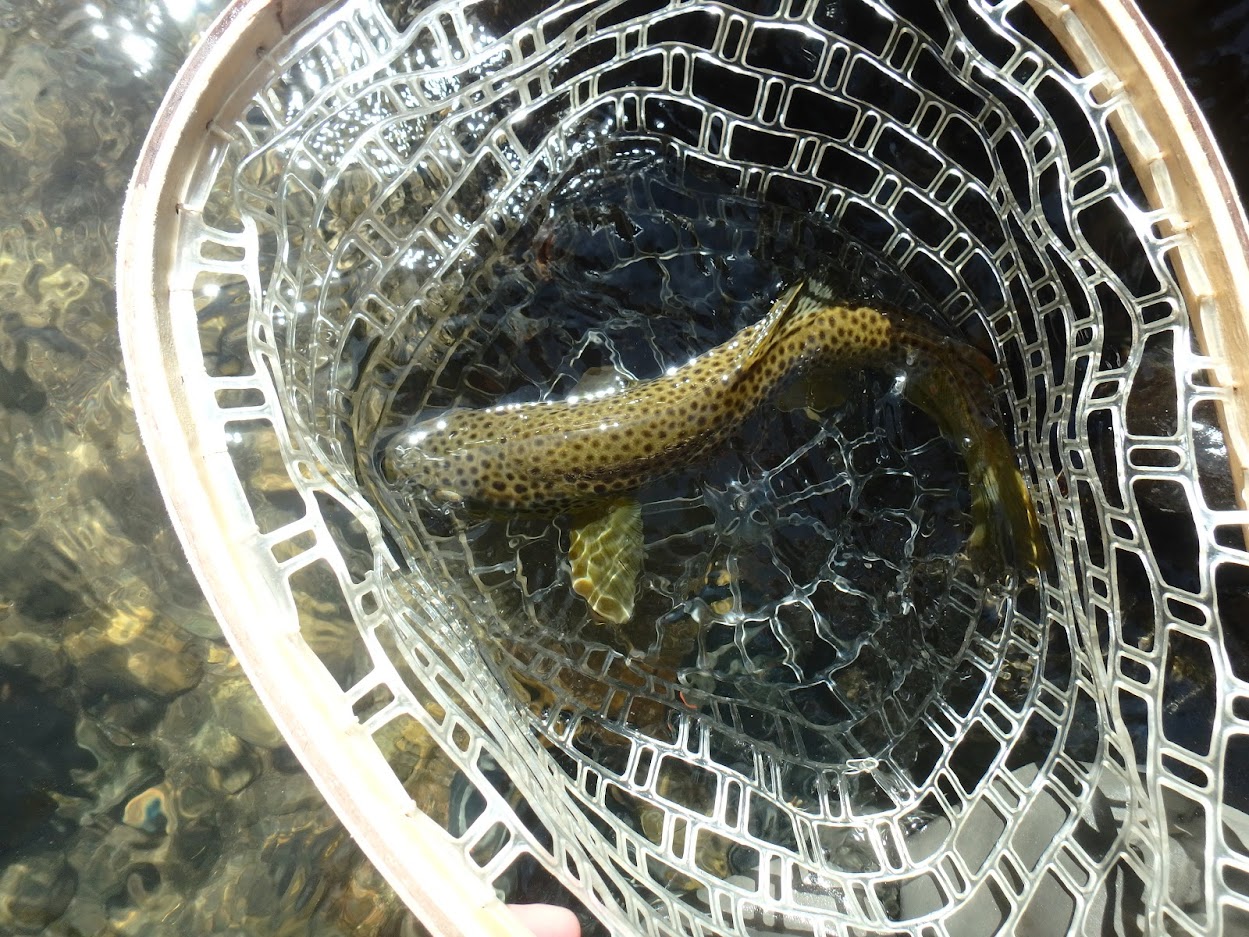 After my early successes my fortunes took a turn for the worse, and suddenly the trout of Clear Creek reverted to form and began to snub the hopper while paying no attention to the trailing nymphs. After a lengthy lull in the action, I downsized the pool toy to a size 10 Chernobyl ant, but the irritating pattern of refusing the top fly continued. This called for another step down in size, and I swapped the Chernobyl for a size 14 hippie stomper. The stomper generated a pair of takes from small fish to boost the count to five, but then it also became a shunned object, and I once again pondered a change.

The nymphs were merely a nuisance and a risk of tangles, so I clipped them off and tossed the solo stomper for a bit, but flashes and rejection ruled the day. Perhaps these persnickety trout desired something even smaller? I exchanged the hippie stomper for a solo Jake’s gulp beetle, and after a couple additional looks and refusals, I managed to land a pair of small brown trout. The beetle was certainly generating more interest, but it was not exactly what the trout were expecting. During the beetle phase I also temporarily hooked several fish, and it seemed that the eats were very tentative and another indicator that my offering was close but not close enough. 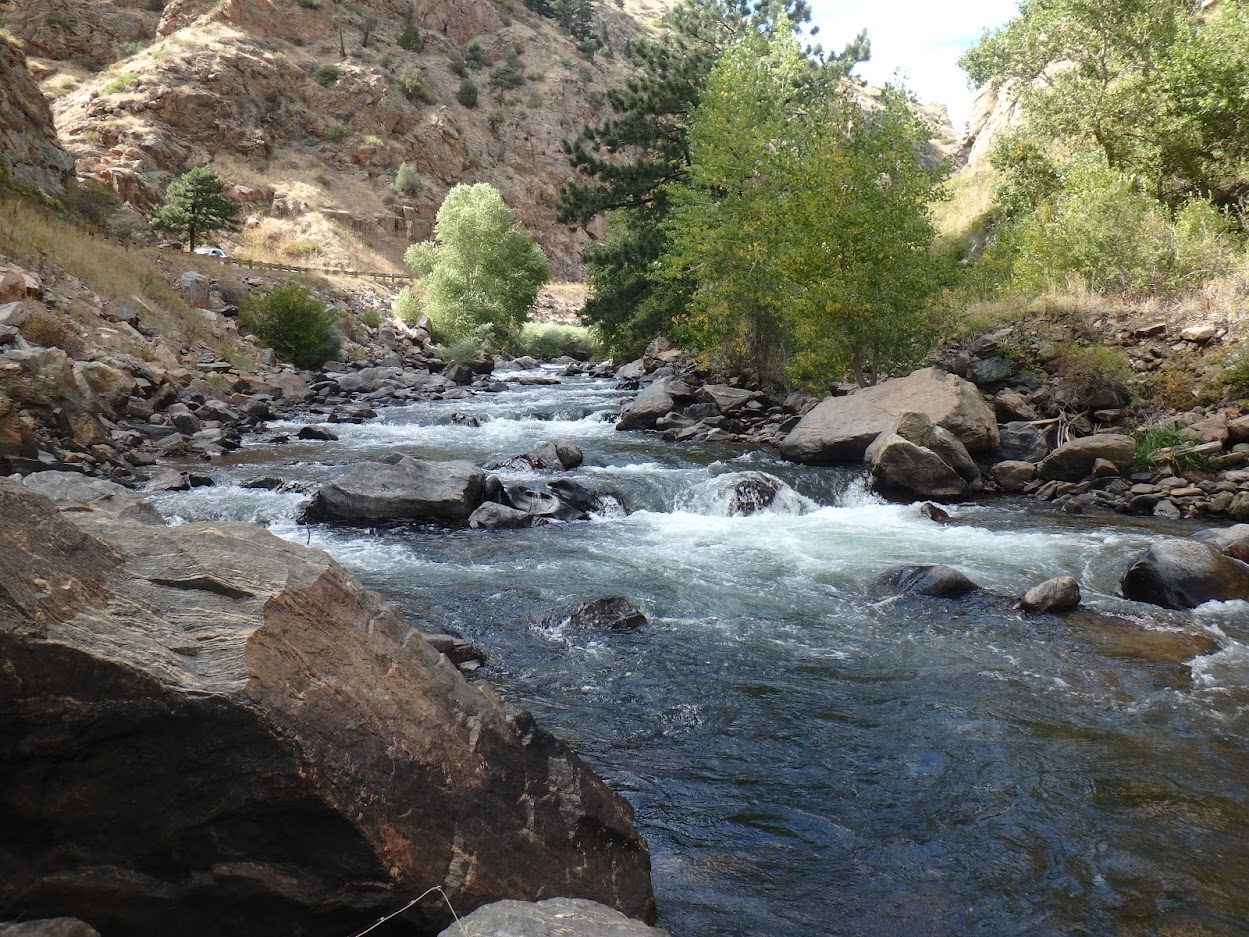 Once again I paused to consider options, and I suspected that perhaps the trout were focused on aquatic insects such as caddis, so I implemented yet another switch to a size 14 gray stimulator. The hackled dry fly was difficult to track, but it did yield one more trout in addition to a batch of subsurface flashes that avoided contact with the hook. The day evolved in a pattern that mirrored many previous trips to Clear Creek. The small natives ignored subsurface offerings and rejected the majority of the dry fly imitations, that I threw their way.

By 2PM I reached a bridge, so I crossed to the opposite side of U.S. 6 and continued my migration. In a fit of frustration I decided to revert to the pool toy hopper, as it was my most effective fly in spite of frequent refusals. I lengthened the dropper to an ultra zug bug and added a salvation nymph as the point fly. I vowed to stick with this method over the final hour and to move at a fairly rapid pace while focusing only on the prime deep slow moving pockets and shelf pools. 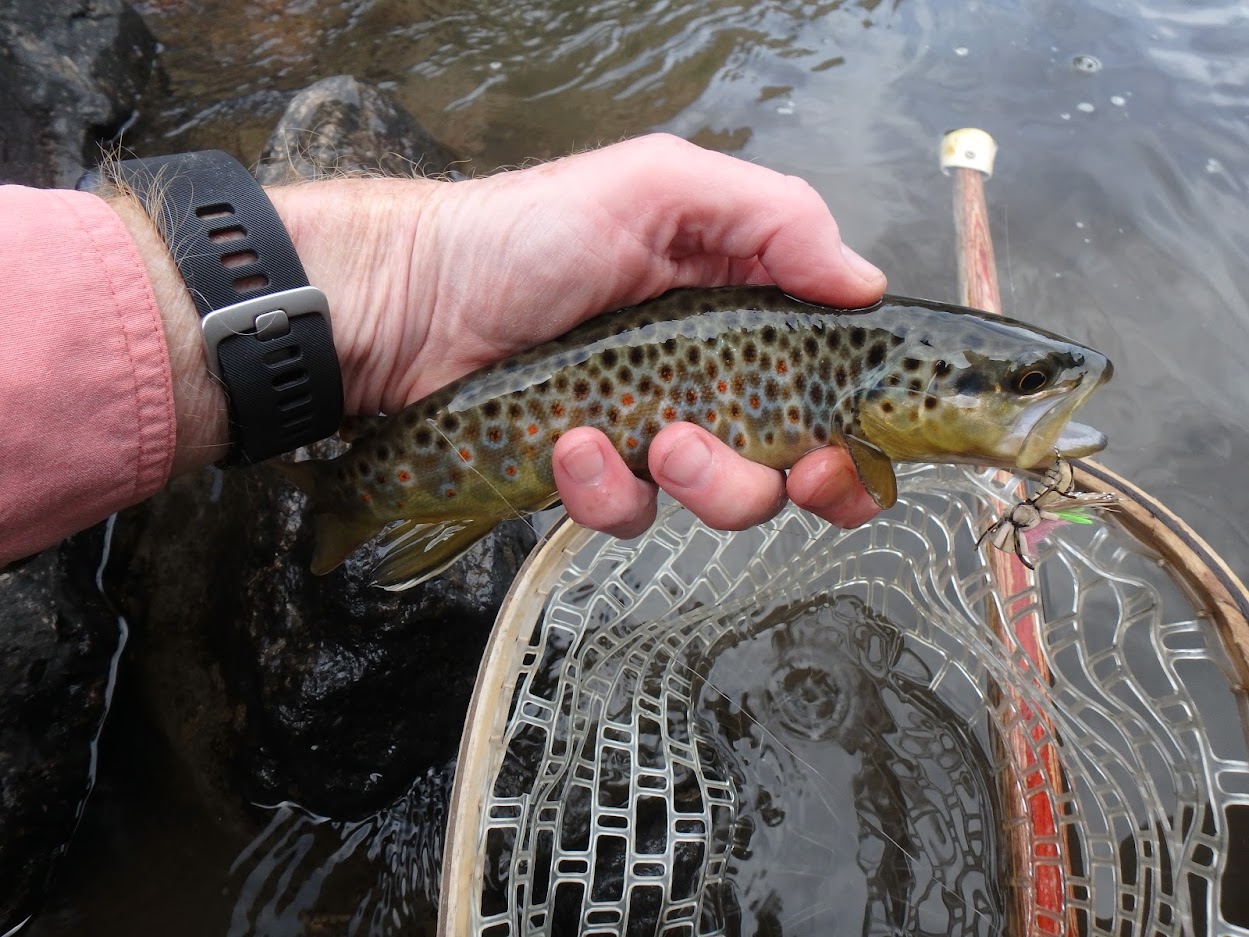 I mostly adhered to this commitment and landed two additional trout, before I called it quits at 3PM. Both trout were browns, and one snatched the salvation, while the other crushed the pool toy. These last trout enabled me to reach double digits, and I was quite pleased to attain that goal on what evolved into a very challenging day. 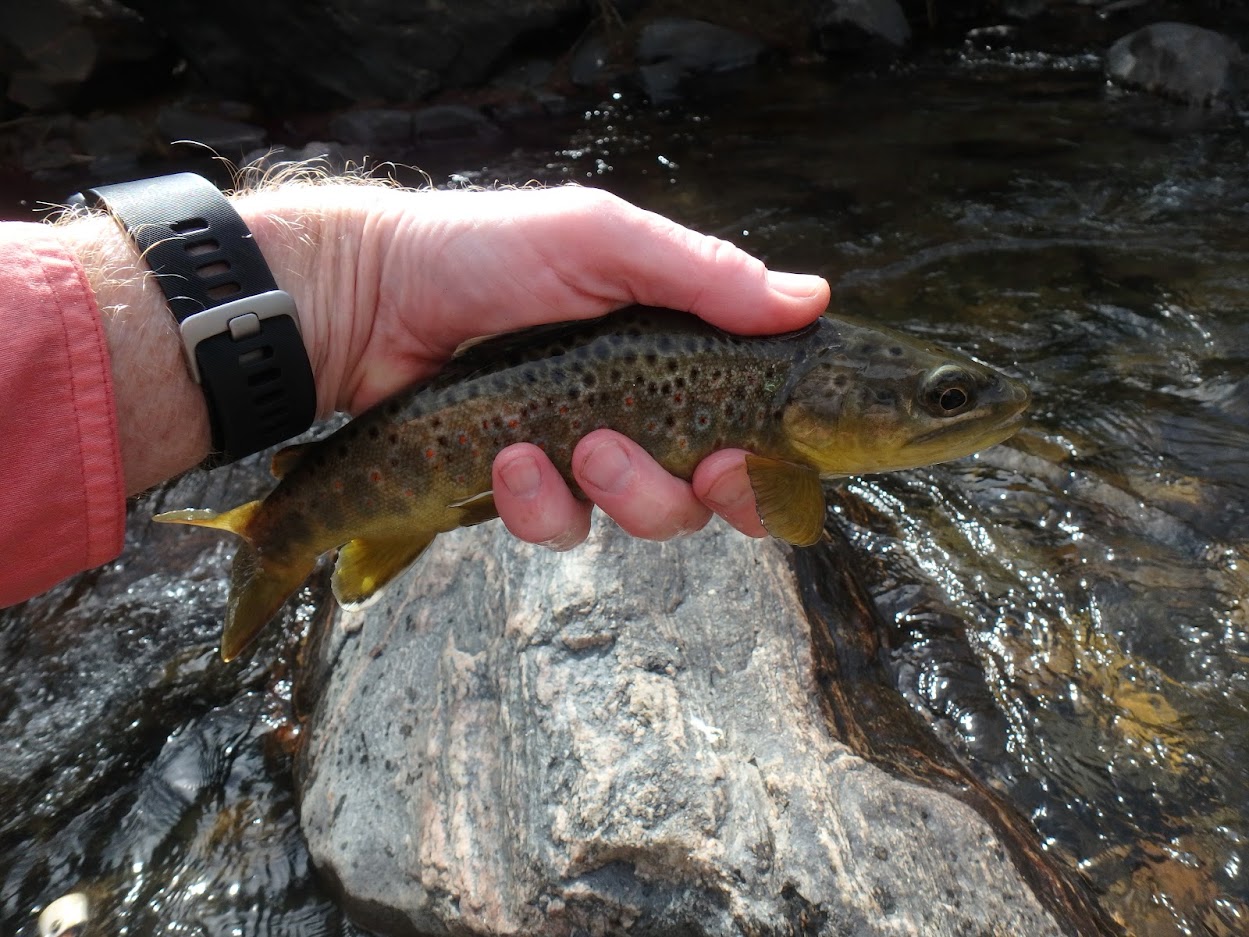 Ten fish in three hours is a decent pace, but the size of the fish was lacking, although I never expected much in this aspect of fly fishing the freestone creek west of Denver. The twelve inch brown on the first cast was actually large by Clear Creek standards. I never found a consistent top water producer, although the trout were clearly looking for their meals on the surface. I caught fish on five different flies, and that was a strong indication that I never found the favored food of the resident trout population. In retrospect I might have tried an ant and a small caddis, but I will never know if these options solved the vexing puzzle of Clear Creek on September 26.