After a short layoff upon my return from the Flattops, I was eager to once again match wits with the high country trout of Colorado on Wednesday, September 23, 2020. I would hate to acknowledge that I was outsmarted by pea-brained trout, but that was a risk I was willing to assume. Highs in the 80’s in Denver prompted me to seek out a high elevation stream, before temperatures dropped to uncomfortable levels.

I chose a new section of Clear Creek, and the temperature, when I arrived at the roadside pullout, was sixty degrees, and I suspect the thermometer never spiked above the upper sixties. At lunch time I pulled on my thin raincoat for added warmth, and I removed my sungloves, as the cooling effect of evaporation was chilling my fingers and causing a stinging sensation. When I arrived next to the stream I noted that the creek was quite low, and this dictated stealthy approaches. 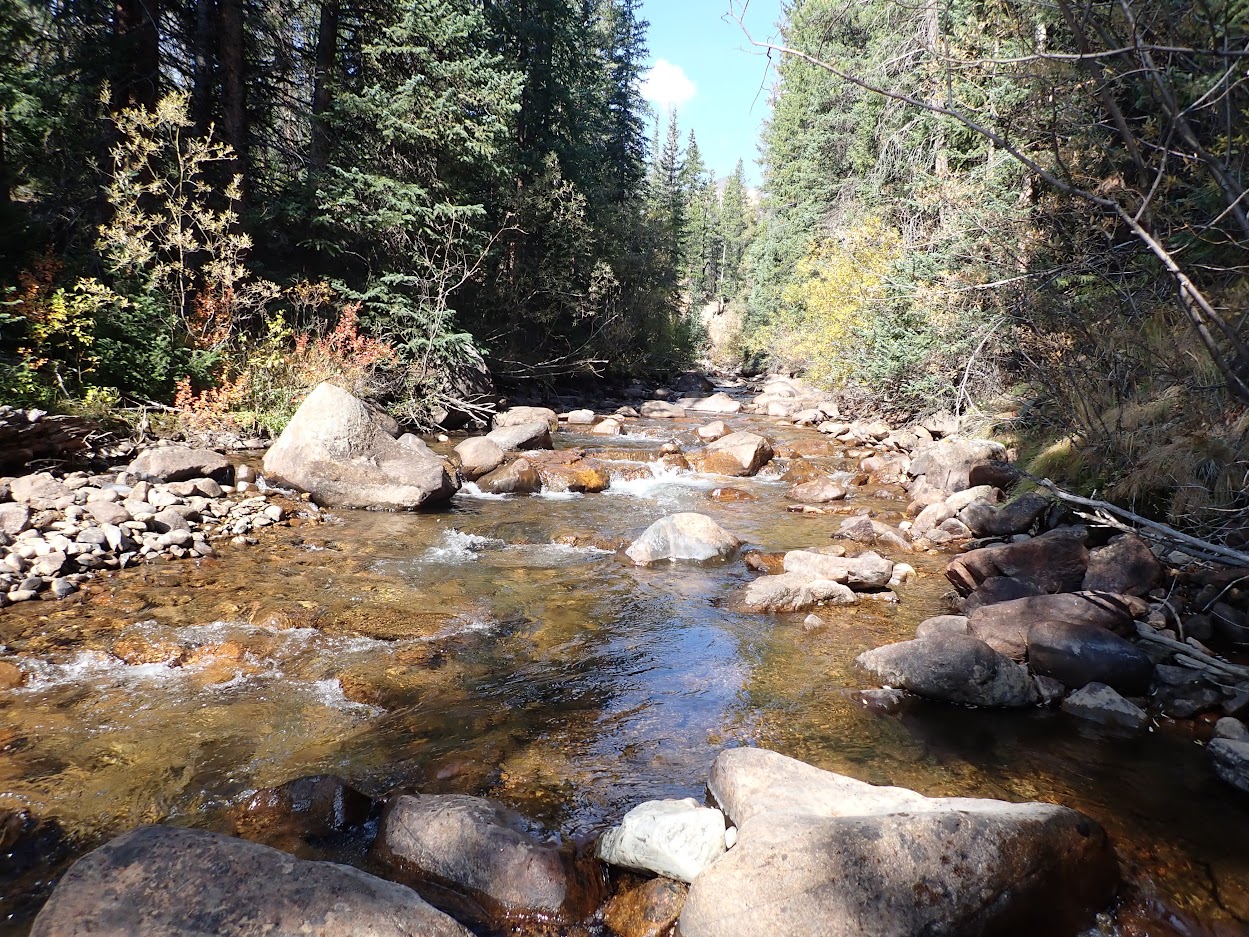 I began fishing at 10AM with my Orvis Access four weight, and I selected a peacock hippie stomper for my initial search for trout. The stomper was ignored in several attractive pockets, and then looks and refusals became the norm. Evidently the dependably irresistible hippie stomper was not on the menu for Clear Creek trout on September 23. Finally after fifteen minutes of futility a pair of cutthroats nabbed the stomper at the lip of a pair of pools. 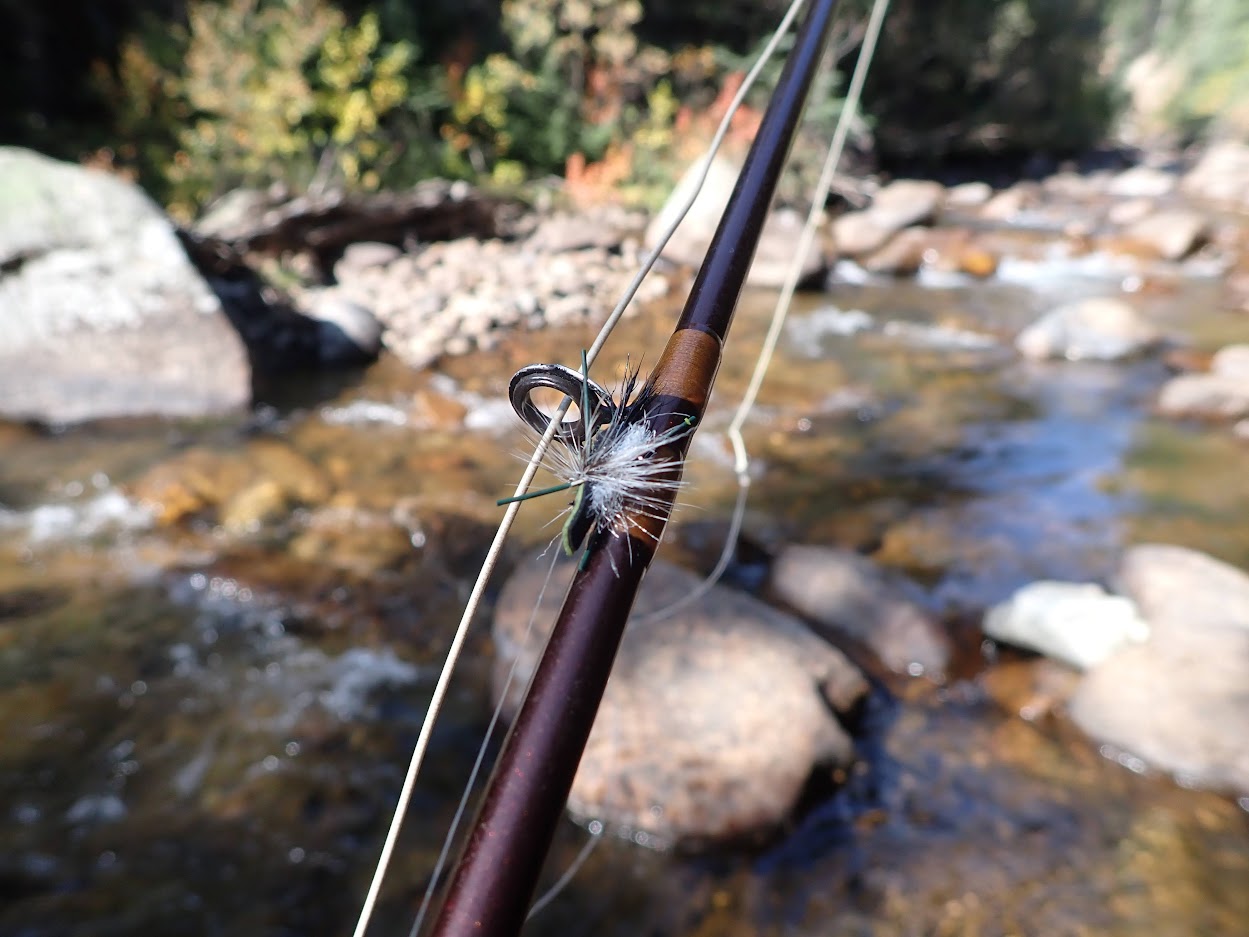 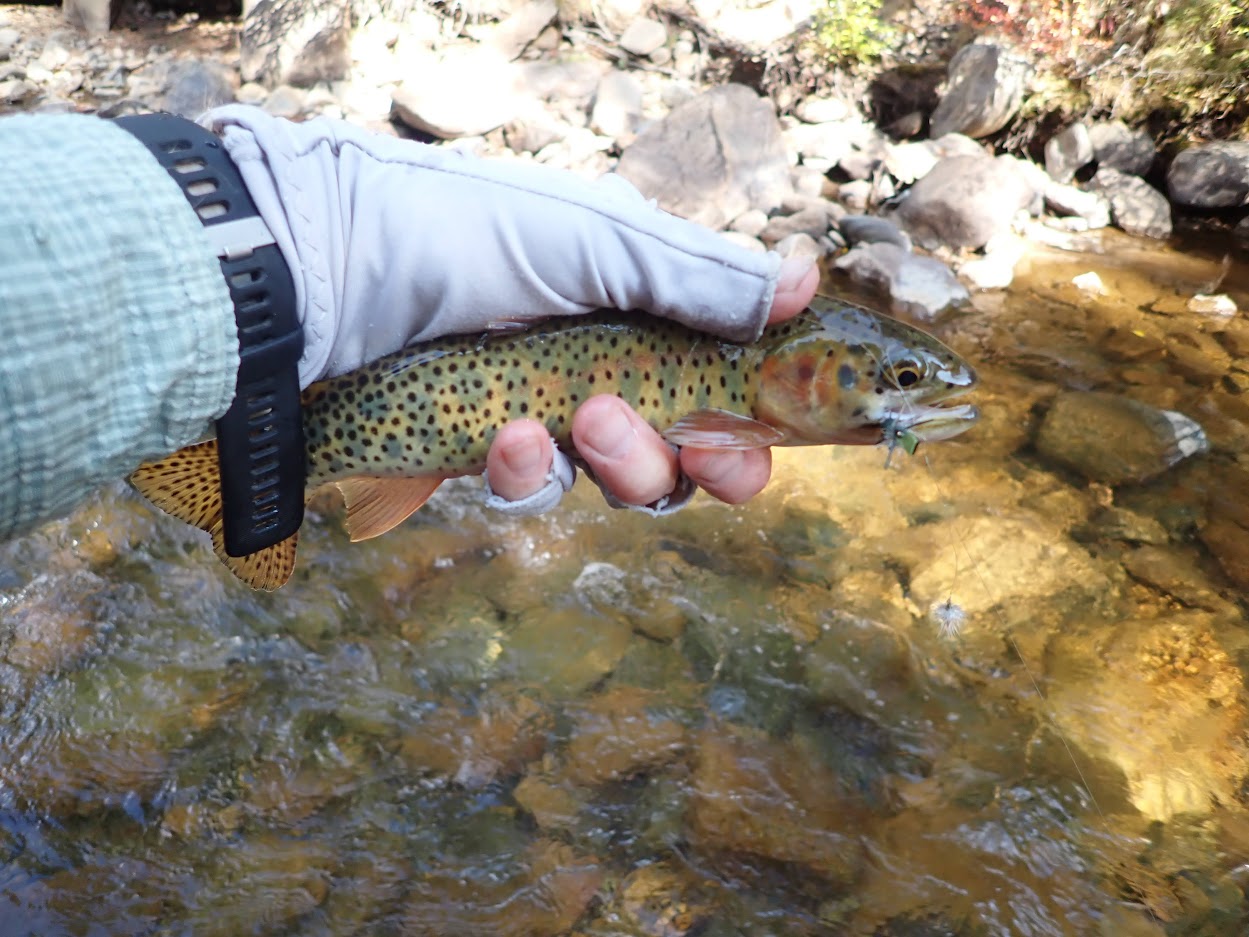 I sensed that I was passing over fish (I saw some dart for cover after I thoroughly covered a pair of attractive pools), so I added a deer hair caddis behind the hippie stomper. The caddis fooled one fish, but it never captured the attention of the stream residents, so I went to a dry/dropper with a very short leader. I added a one foot section of monofilament to the bend of the stomper, and then I knotted a size 18 beadhead pheasant tail to the line. The switch to a subsurface offering proved beneficial, and I raised the fish count to ten, before I broke for lunch at noon. Most of the late morning catches grabbed the pheasant tail near the tail of deep pockets or pools. For awhile I added a salad spinner and zebra midge below the pheasant tail, but these flies never produced a fish and only served as a tangling annoyance, when I hooked fish on the hippie stomper or pheasant tail. 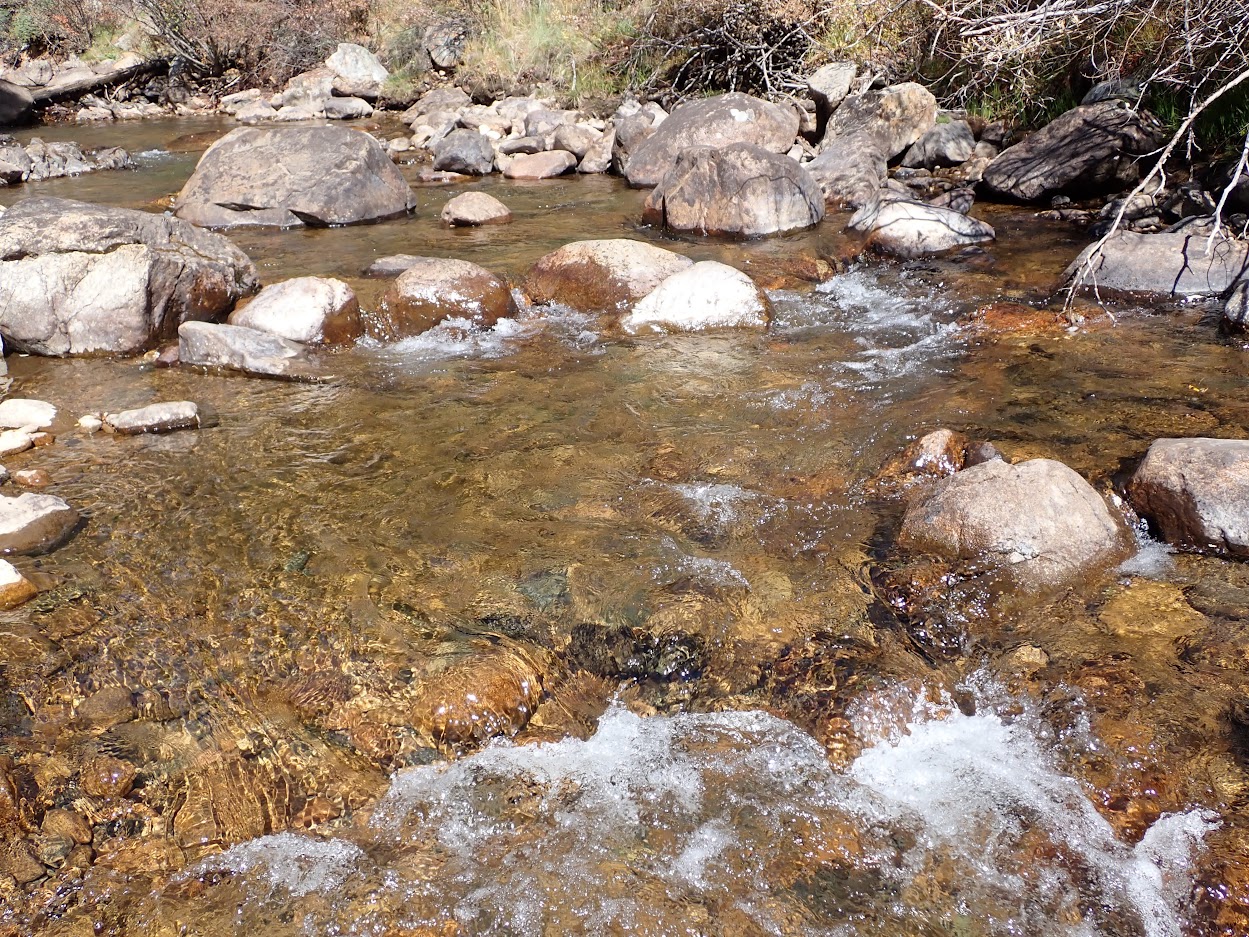 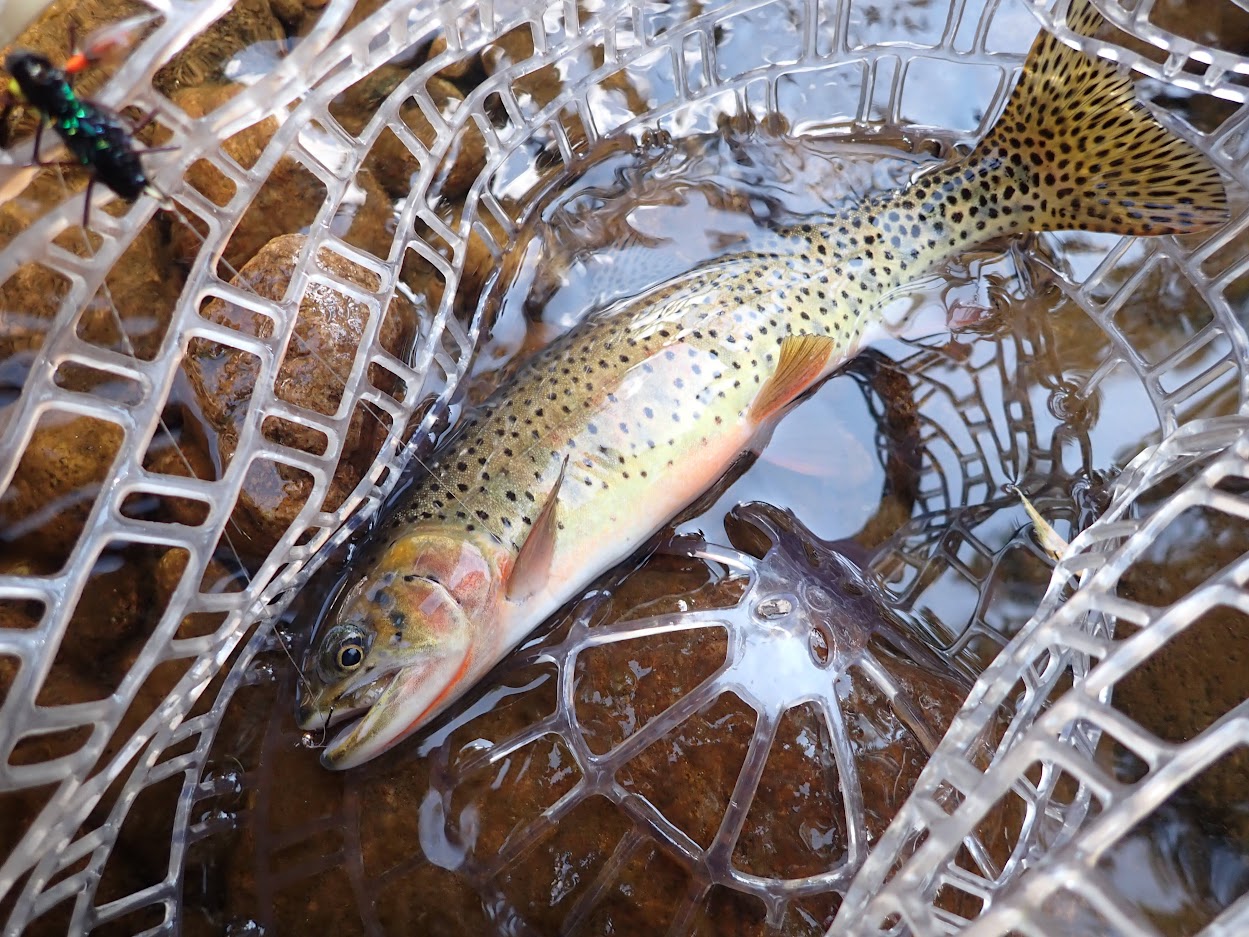 Some Width to This One

In the thirty minutes before lunch the hippie stomper became purely an indicator, and the white wing was difficult to track in shadows. I decided to convert to a more buoyant and visible indicator fly and replaced the stomper with a size 10 black Chernobyl ant. I kept the pheasant tail as the upper subsurface fly and then cycled through a series of nymphs and wet flies in the point position. The array of trial flies included a partridge and orange, an ultra zug bug, a hares ear nymph, and a Craven soft hackle emerger. Only the soft hackle emerger delivered a fish; however, the pheasant tail continued to be my mainstay fly. 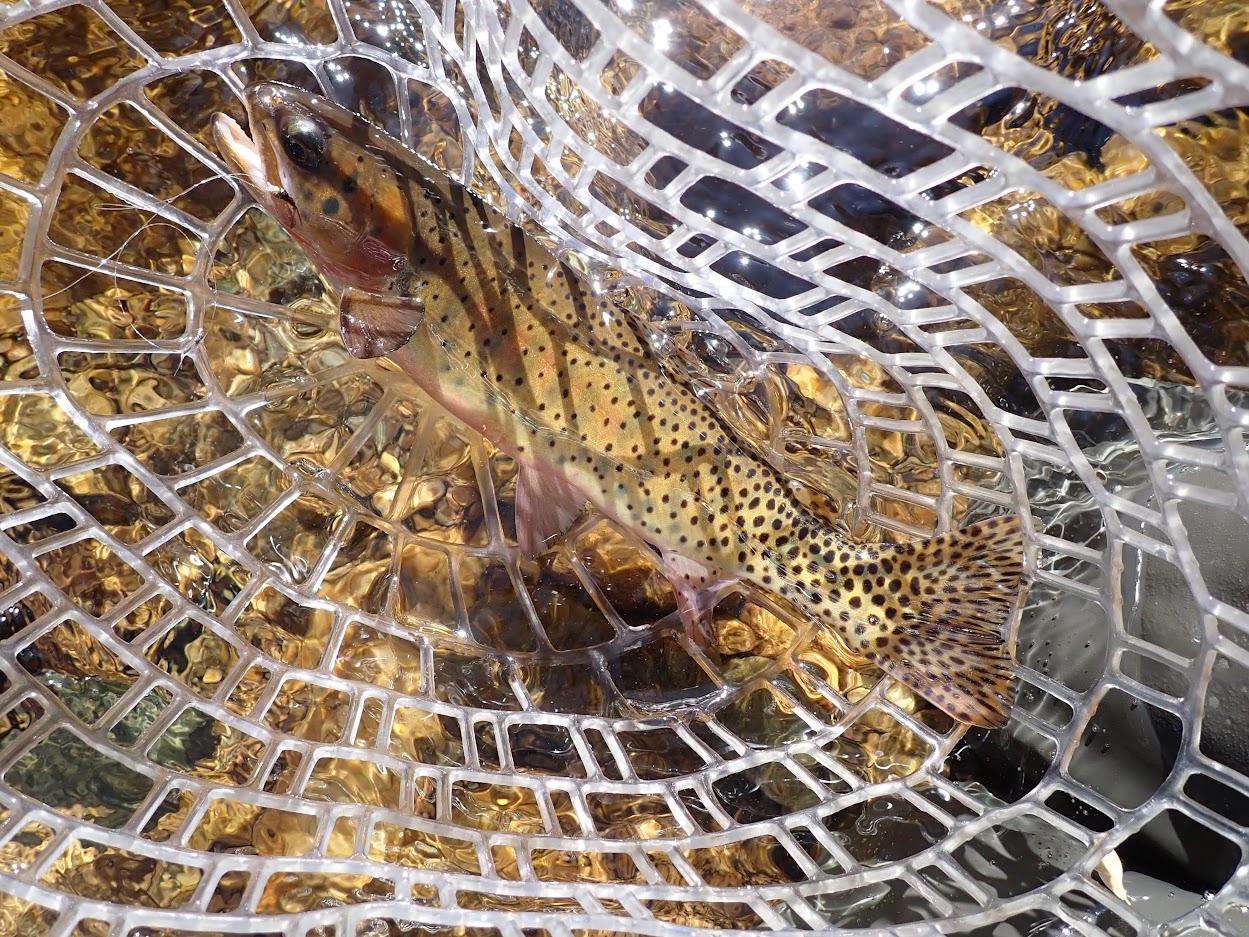 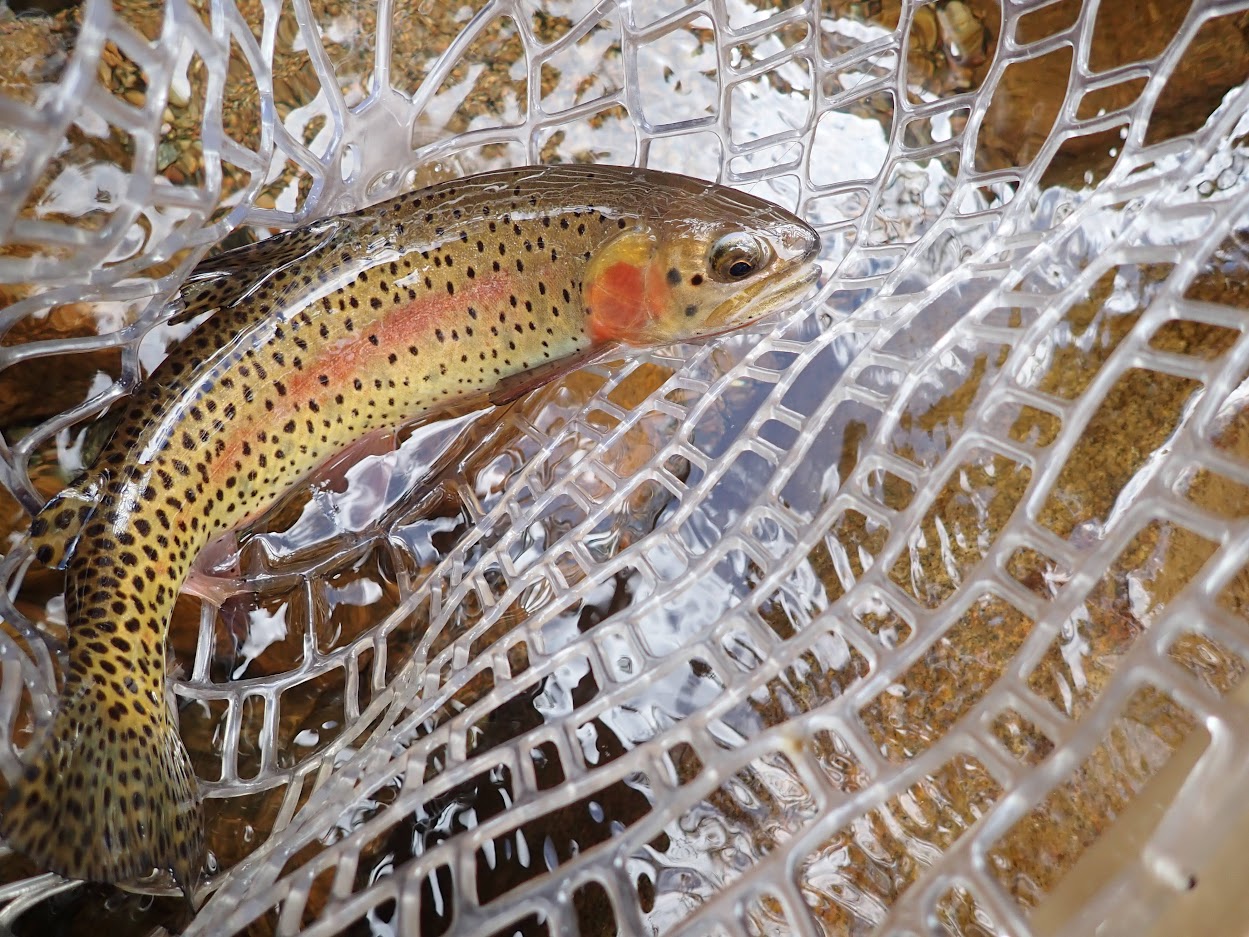 During the last hour the catch rate subsided, and I covered much more water between netted fish. I decided to try dry flies once again and attached a yellow size 14 stimulator to my tippet. A wave of refusals greeted this move, but then a cutthroat crushed the heavily hackled dry fly. The yellow stimulator became a one fish wonder before an errant backcast donated it to an evergreen tree. Next I moved to a gray size 14 stimulator, but evidently the high country stream residents were not color blind, because gray did not arouse interest. I downsized to a gray size 16 deer hair caddis, and an aggressive fish smashed it, but then the caddis was ignored, and I struggled to follow it in the swirly currents. This would have been an ideal time to once again experiment with a sunken ant, but I am ashamed to admit, that I have not visited the tying bench to produce a batch after losing my one and only black metal head ant. 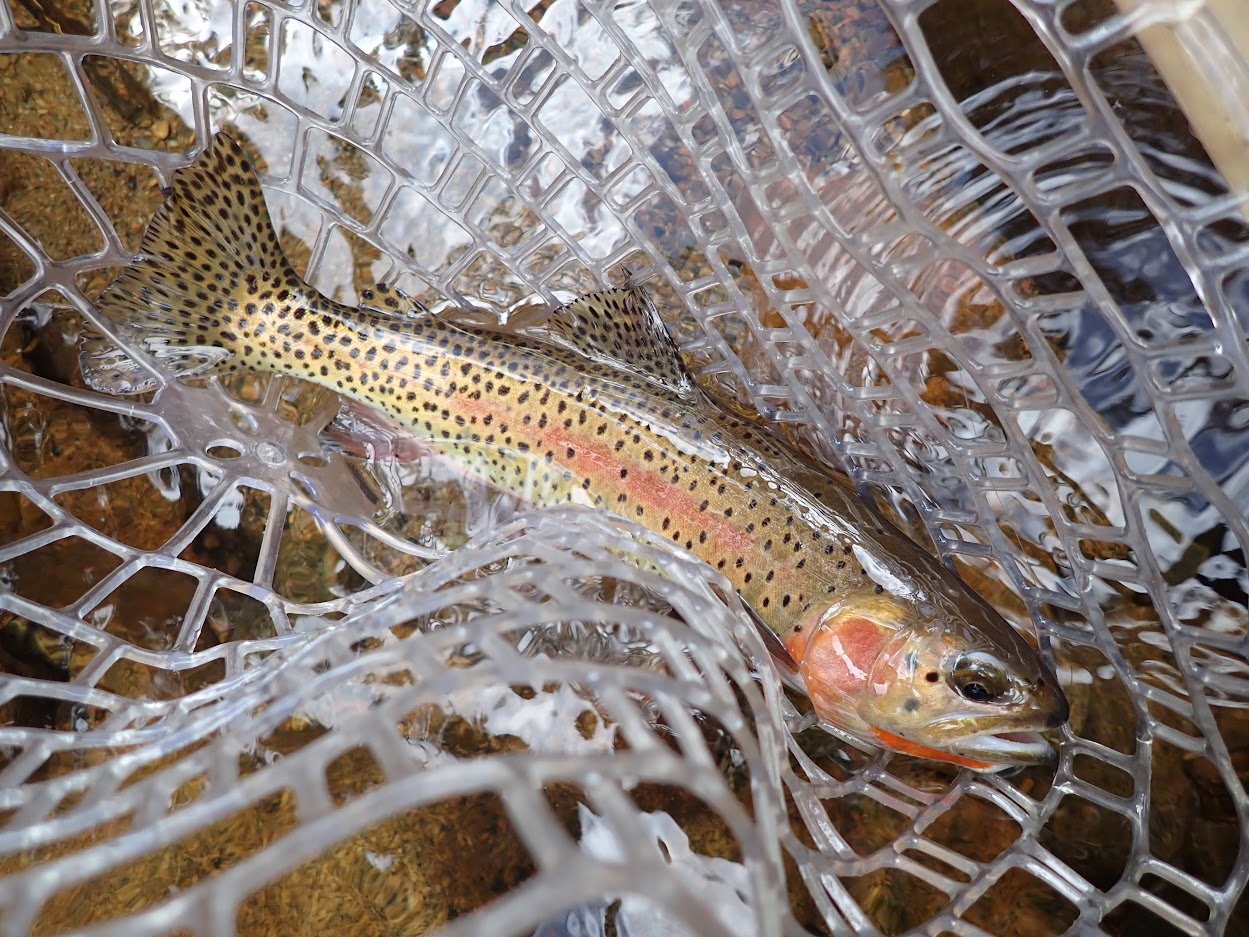 It was after 3:00PM, and I was about to quit, but several nice pools beckoned a short distance upstream. I exchanged the caddis for a Jake’s gulp beetle, and in a very smooth slow moving pool a nice cutty raced at least five feet to inhale the terrestrial. That was my last bit of action, and I retired at 3:30 and found a path back to the car. 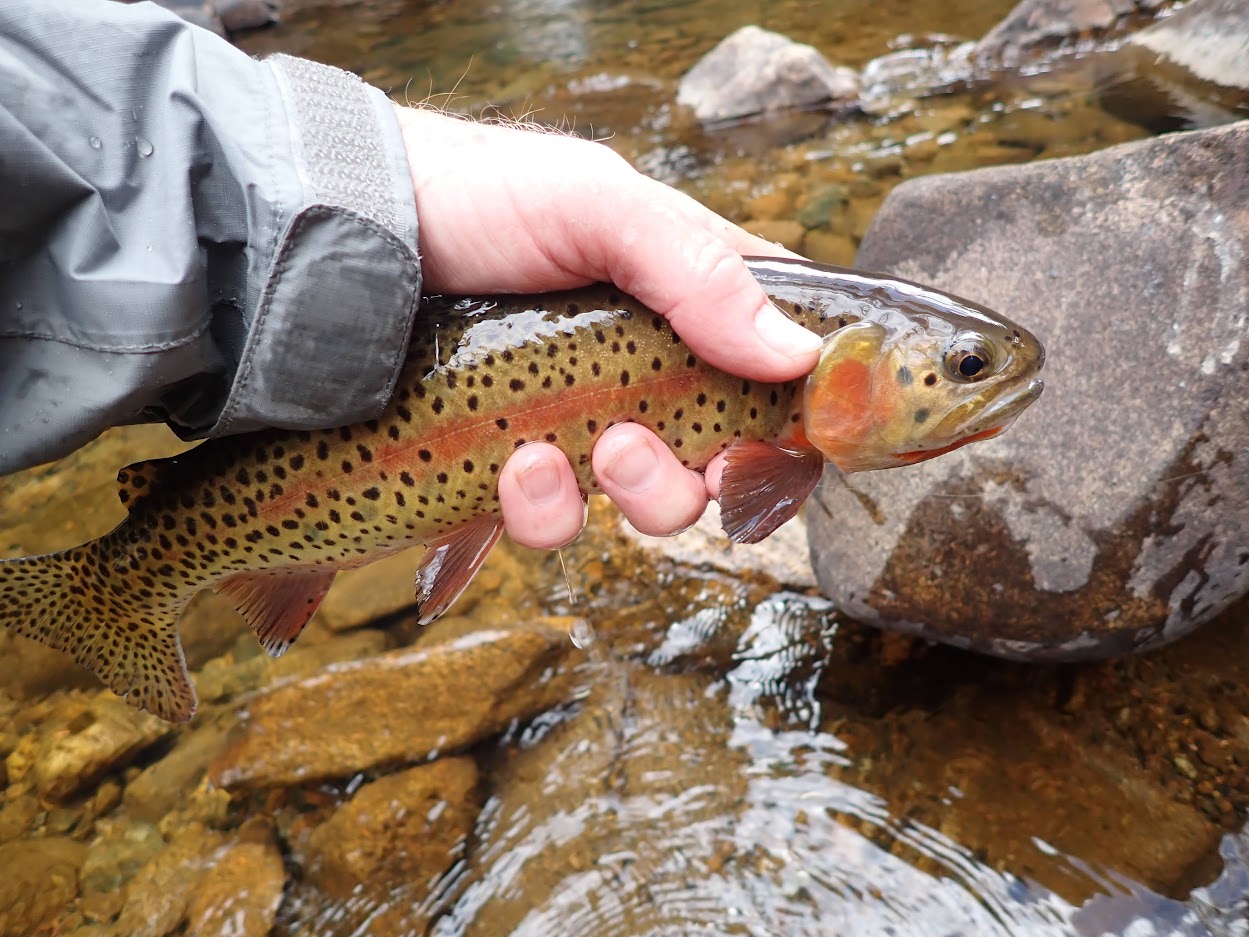 Water Droplet Off My Finger

Wednesday was another fine day on a high elevation stream catching colorful cutthroats. The largest fish merely stretched to eleven inches, but the wild stream residents made up for a lack of size with vivid colors and spunky attitudes. This may have been my last day on this particular creek in 2020, unless unseasonably warm weather continues.