I was itching to return to South Boulder Creek for green drake action after our camping trip on Monday through Wednesday. After Jane and I unpacked the car from the camping venture, I immediately reloaded it with my fishing gear, and I prepared a lunch. I was all set for an early start to my drive to South Boulder Creek. I learned, however, from past experiences, that the Denver Water managers unexpectedly vary the flows from Gross Reservoir, so I made a last minute check on Thursday morning. Imagine my disappointment, when the graph revealed that the flows were ratcheted up to 230 CFS after four days at 140 CFS. I was not interested in battling the stiff currents through the narrow canyon, so I resigned myself to a day of catching up on other matters.

I began to unpack the car, when Jane asked why I did not try the stretch of Clear Creek that a pickle ball acquaintance recommended. I pondered the question and decided that Thursday, August 28, was a day to experiment with a different section of water. I restored my fishing gear to the car, stuffed my lunch in the Coors insulated bag, filled my hydration bladder, and departed for an adventure on Clear Creek. I arrived at my chosen destination at 10:30AM, and by the time I assembled my Orvis Access four weight and tugged on my waders and hiked .5 miles downstream, I was primed to fish by 11:00AM.

By late morning, Thursday developed into another hot day with temperatures in the eighties at my high elevation location. I wore my waders, because I was not familiar with the vegetation and terrain, but I soon regretted that decision. The creek was clear and cold and fairly narrow, but enough volume tumbled over the rocky stream bed to create abundant quantities of deep pools, runs and pockets. I would characterize my mood as moderately optimistic, but I was obviously excited to sample a new area. I tied a light brown-olive size 14 stimulator to my line, and in a short amount of time I experienced two refusals and two temporary connections. Clearly the bushy attractor fly caught the attention of the fish, but the takes seemed to be very tentative thus explaining the brief nature of the encounters. When refusals become the prevalent fish response, my first response is to down size, and in this case I accomplished that by exchanging the stimulator for a size 16 deer hair caddis with an olive-brown body. The small low riding caddis clicked, and I began landing stunning cutthroat trout from the small stream. The trout measured between eight and twelve inches, but they were a pleasant surprise, and their colors were vivid in the dry high country environment. 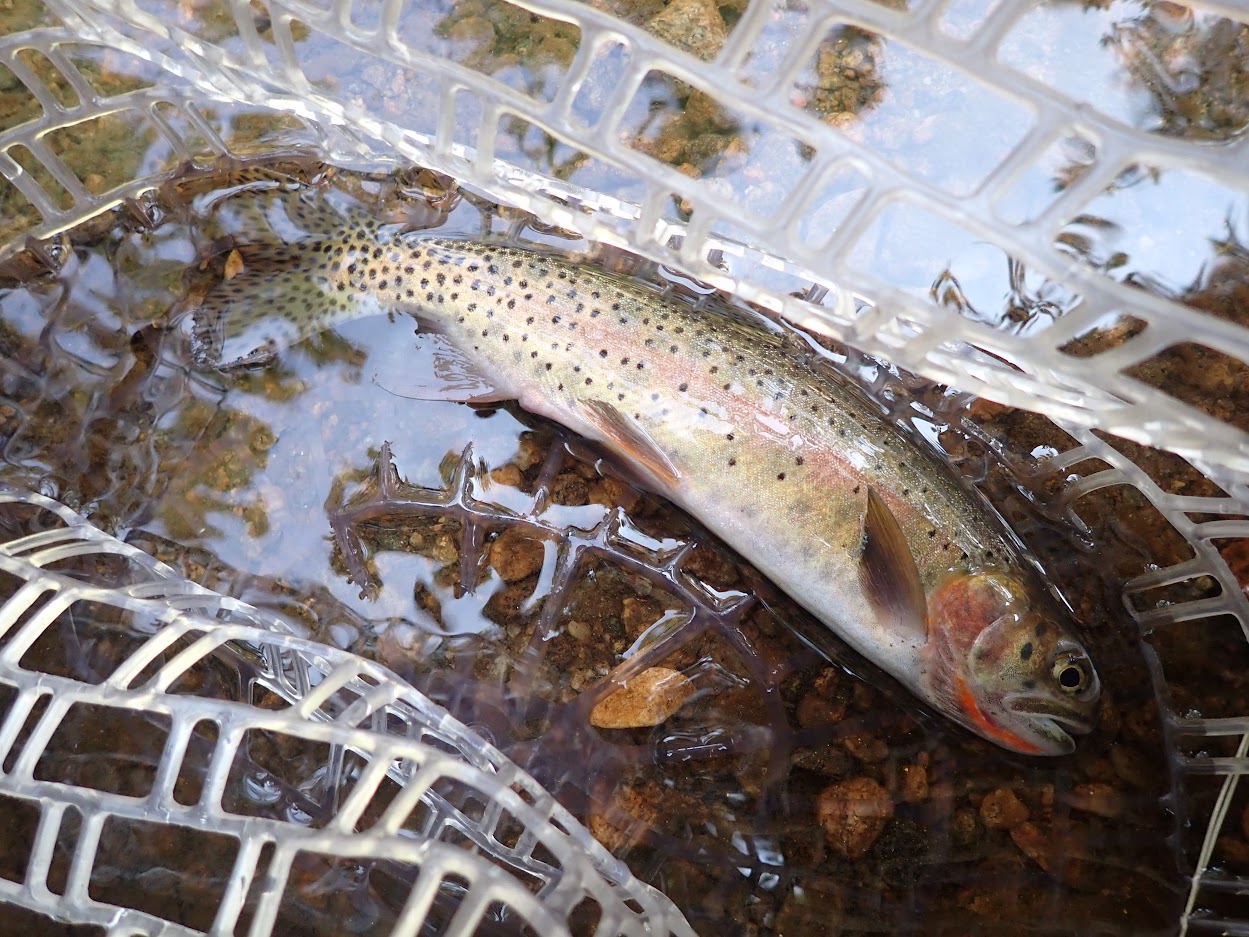 Many of the trout consumed the caddis, but of course this fly was quite difficult to follow in the dappled shade and sunlight. I grew weary of drying the fly constantly and decided to evaluate a more visible and buoyant option. I knotted a peacock hippie stomper to my line, and almost immediately duped a cutthroat, but after the early success the trout served up a steady stream of refusals. I once again elected to downsize, and I tied a bionic ant to my line. The bionic ant is a foam ant that I tied for the first time this spring during my surgery recovery, and it showed promise, as it fooled two cutties, before I set the hook on water and hurled the fly line into a tall evergreen tree. I quickly determined that the fly was impossible to retrieve, so I yanked hard and broke off the only bionic ant in my MFC fly box. I made a mental note to restock some bionic ants. 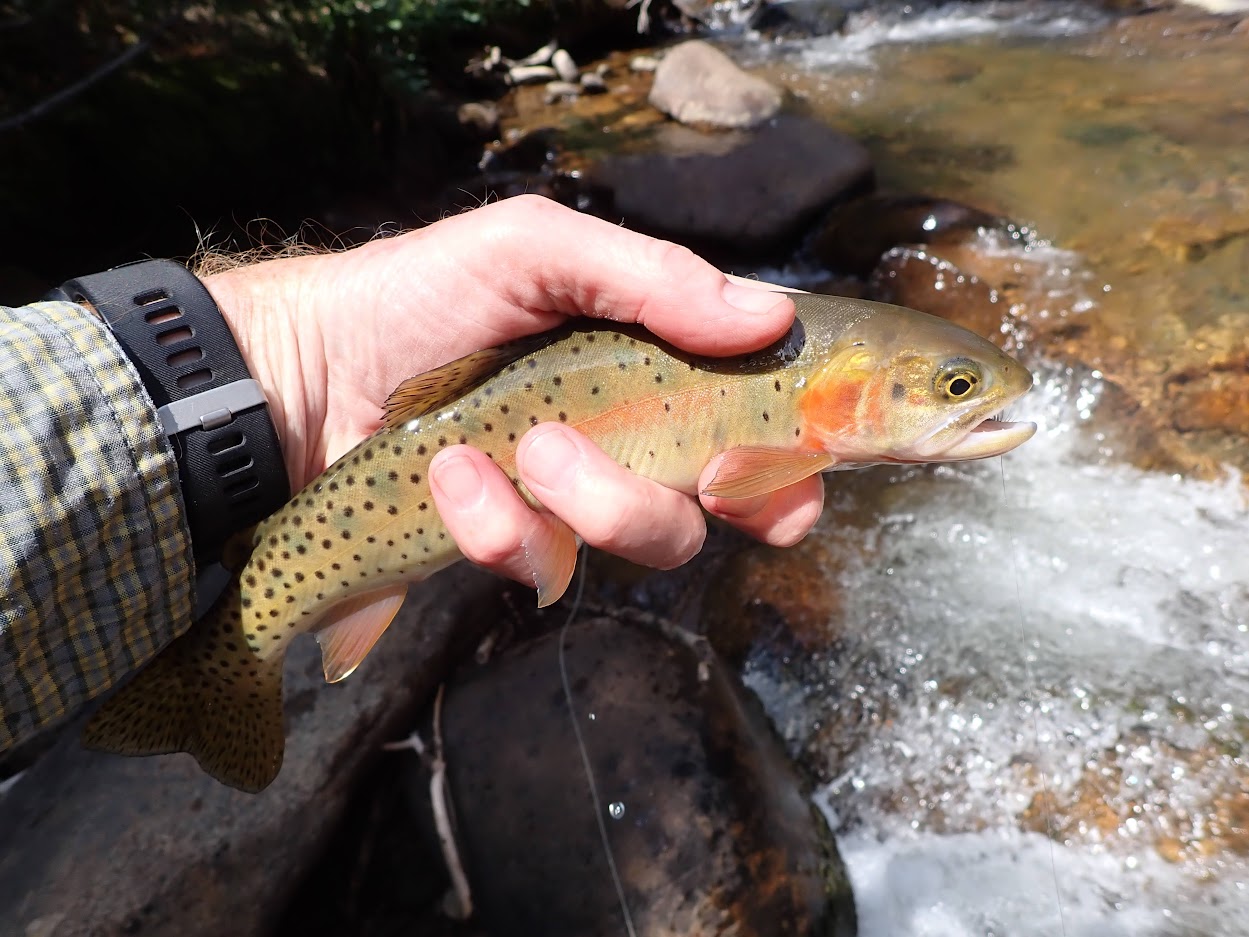 I now knew that the local fish savored ants, so I knotted a size 18 parachute black ant to my line. Logic would suggest that this fly was actually more imitative of the ants in the area than the bionic version, but surprisingly it elicited looks and refusals. I considered another fly change, and I stuck with the terrestrial theme and replaced the small ant with a size 14 Jake’s gulp beetle. The foam beetle imitation duped a pair of fish, but frequent refusals suggested that it was not the favorite, that I was seeking. I returned to an earlier productive fly and added back the deer hair caddis on a six inch dropper from the bend of the beetle. Once again the caddis justified my confidence, and tentative feeders morphed into confident eaters. The fish count mounted steadily, and I enjoyed myself immensely, as I migrated upstream. I spotted quite a few of my target fish in the clear water, and it was a thrill to view the casual approach and slurp of the visible cutthroats. 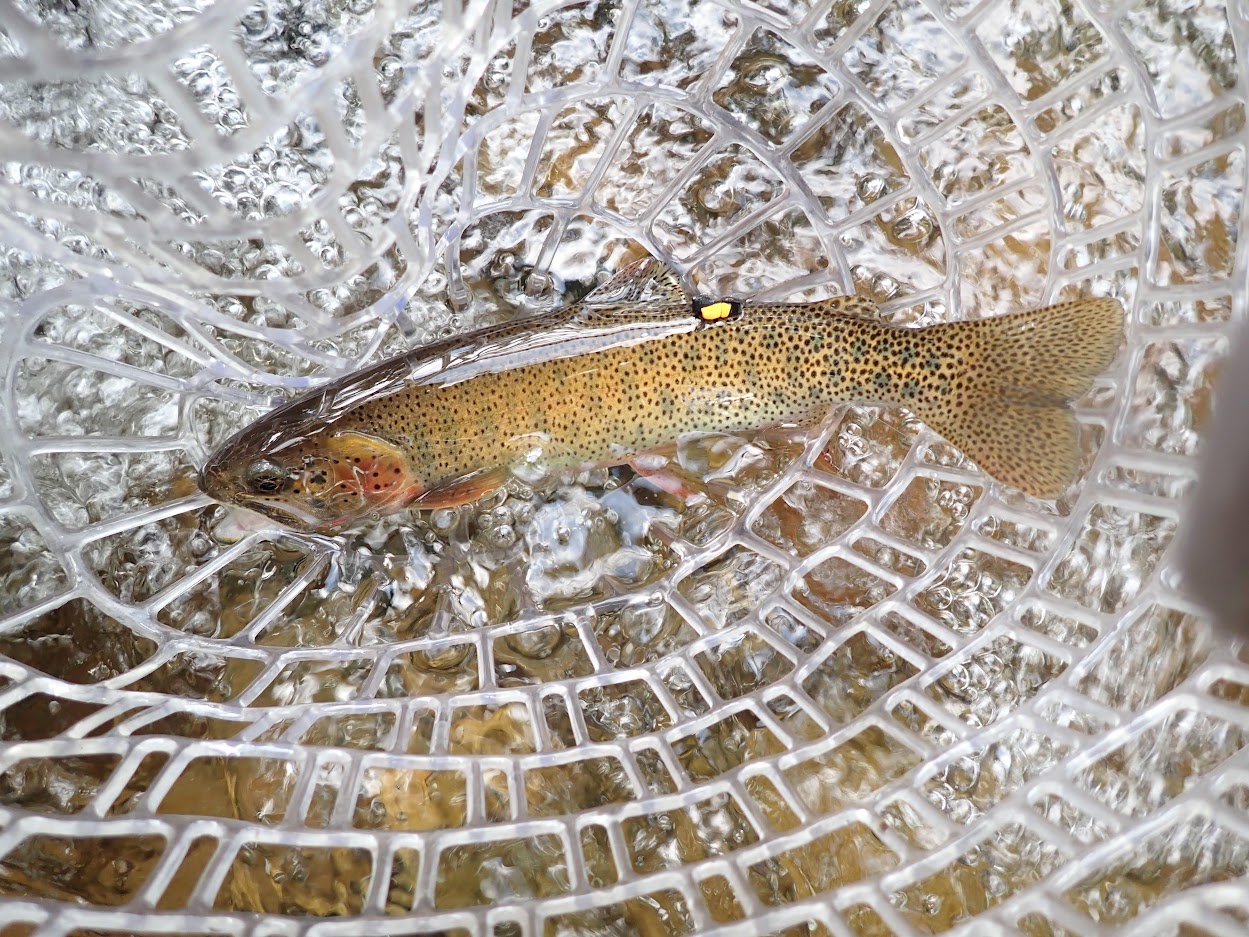 When one of the cutthroats crushed the foam beetle, I struggled to remove the fly, and a damaged terrestrial was the outcome. One of the legs disappeared, and the orange indicator began to rotate to the side as a result of the loosened thread wraps. I decided to make a change, and I scanned my fly box for a replacement. Originally my eyes focused on a size 12 Jake’s gulp beetle, but in the midst of these flies I noted a pair of size 12 moodah poodahs. These were also experimental flies tied during the surgery recovery and coronavirus lockdown, so I selected one and attached it to my line. 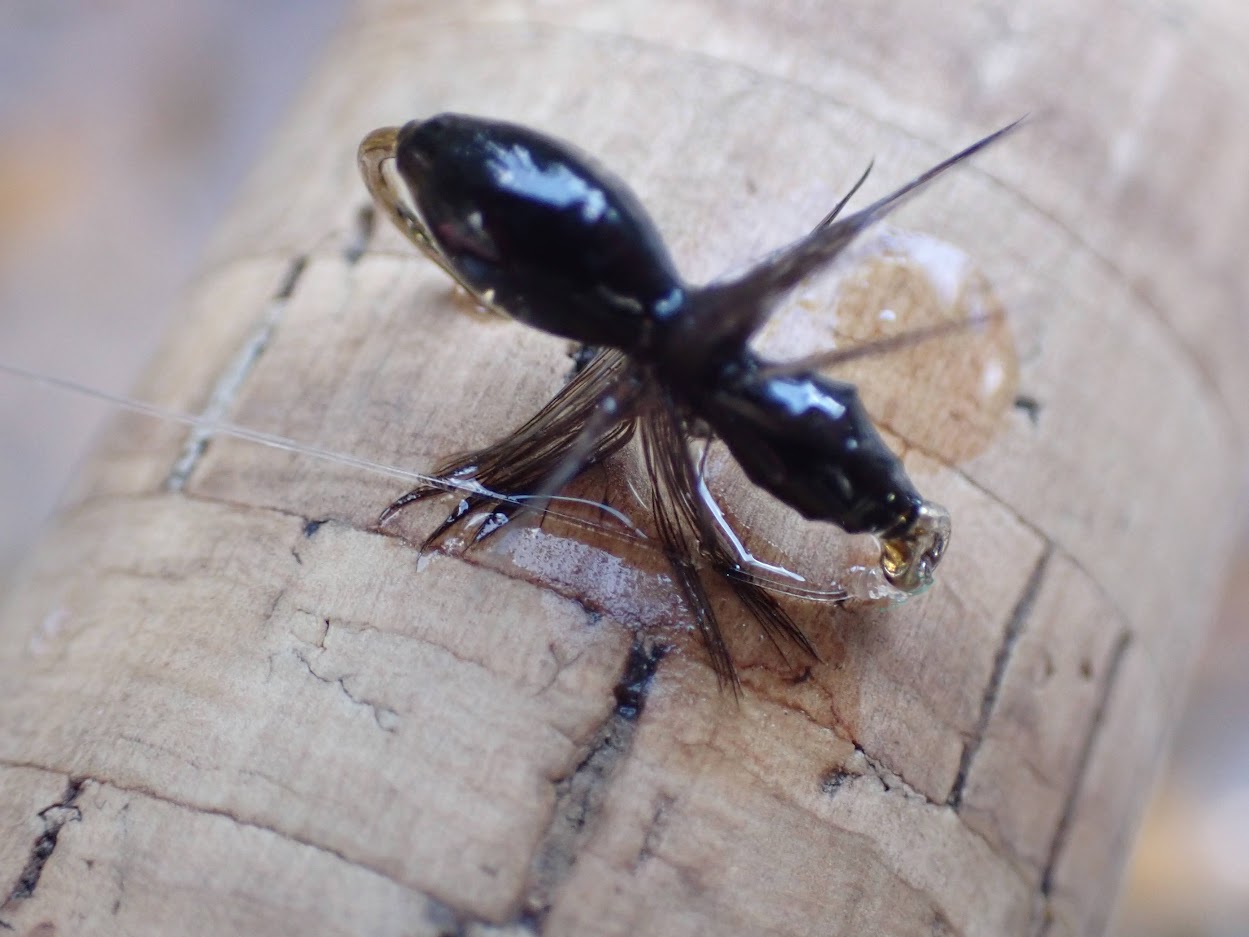 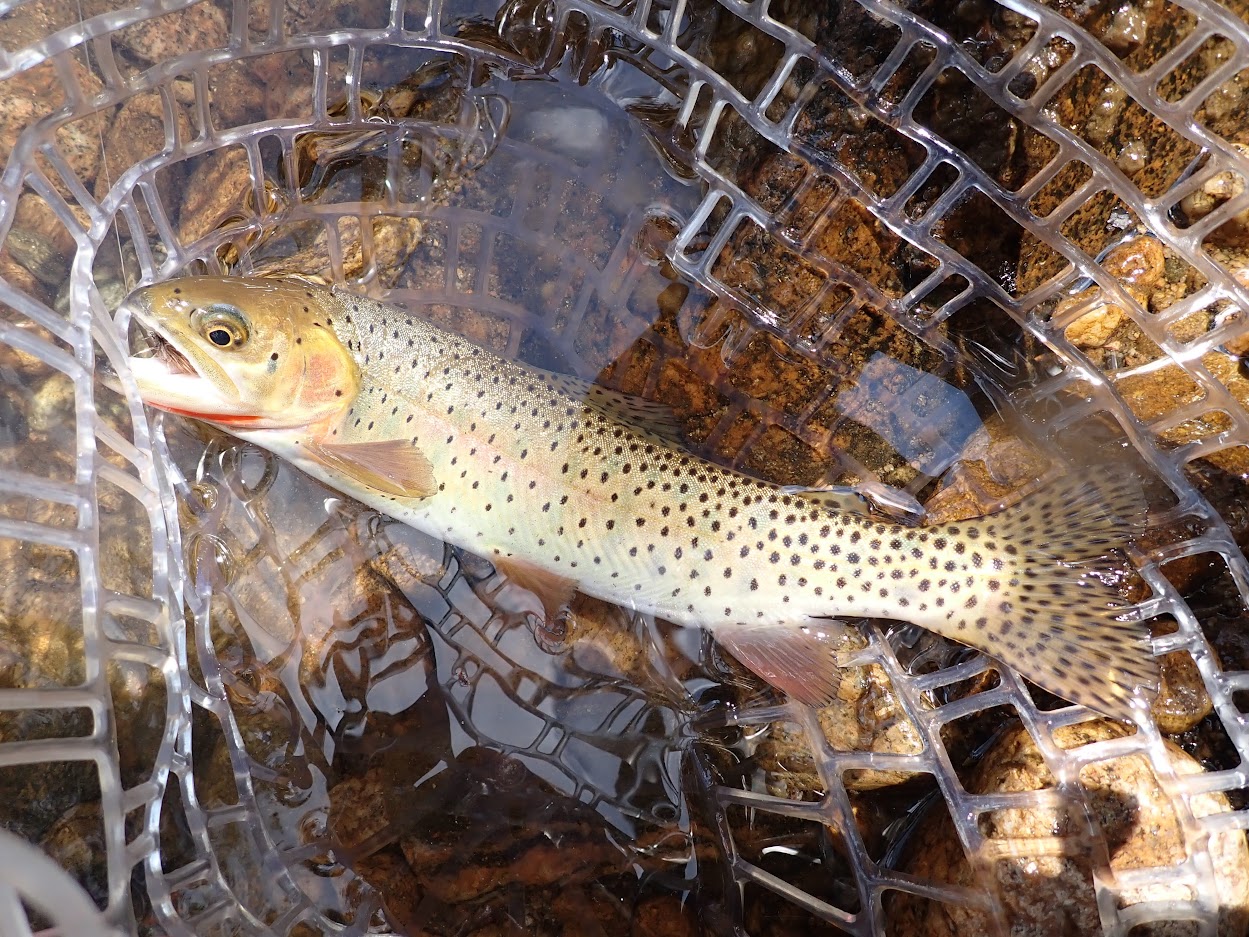 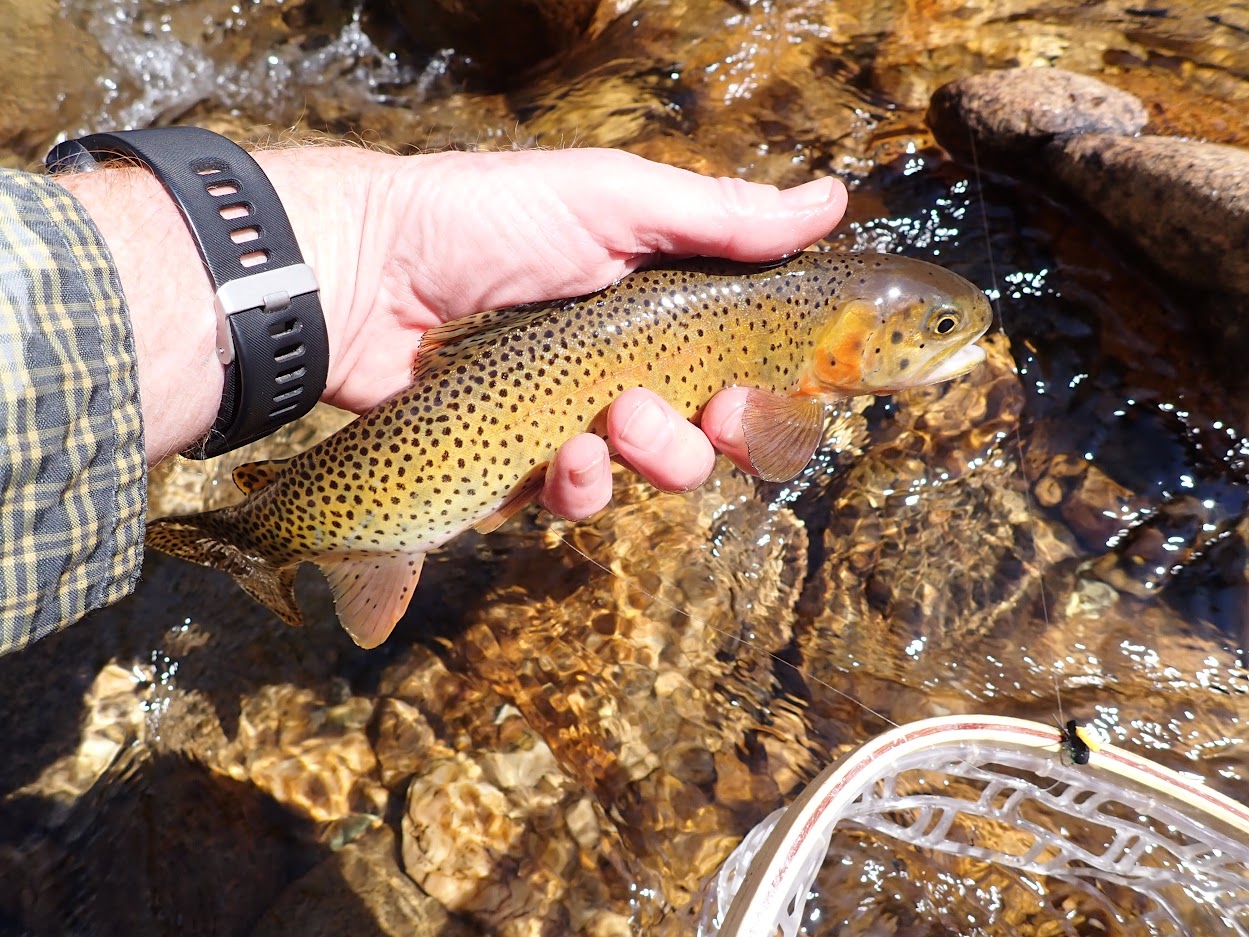 It was at this time that I was locked on fourteen fish, and I had gone without action for a longer than usual period of time. I subscribe to quite a few fishing magazines, and on a regular basis they discuss the ploy of fishing drowned terrestrials. I decided to experiment with the sunken ant concept on Clear Creek, and I plucked a black size 16 hard body ant from my box. This was the only one in my possession, and it was tied by my friend, Jeff, many years ago. 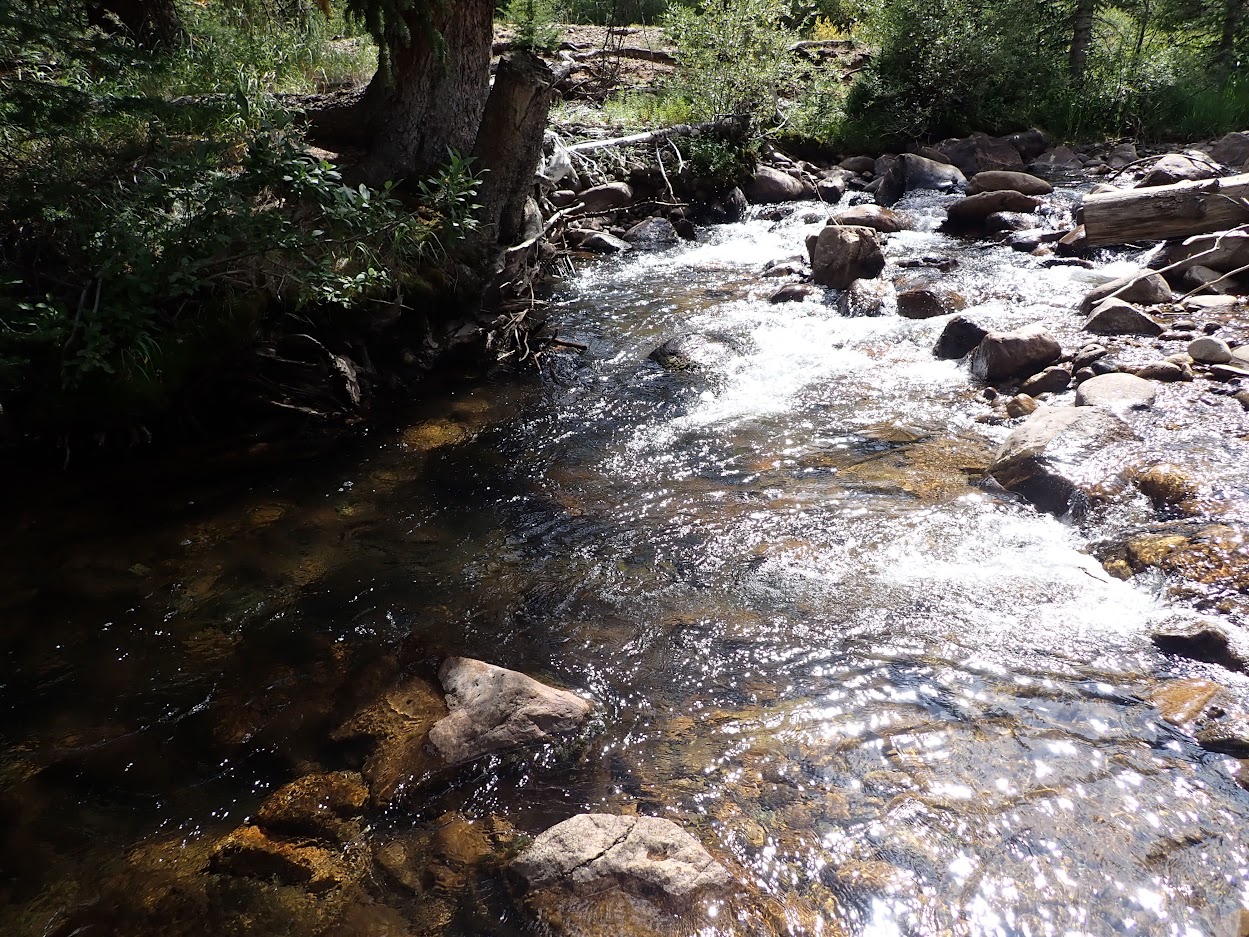 What a choice this combination turned out to be! The fish count surged from fourteen to twenty-three over the last hour, and most of the landed fish snatched the hard ant. A couple cutthroats succumbed to the moodah poodah, but the prevailing preference was the sunken ant. The ant seemed to be particularly effective in small deep oxygenated pockets at the top of a run. My best cutthroat of the day grabbed the black hard body in a deep tight eddy next to a large exposed boulder. 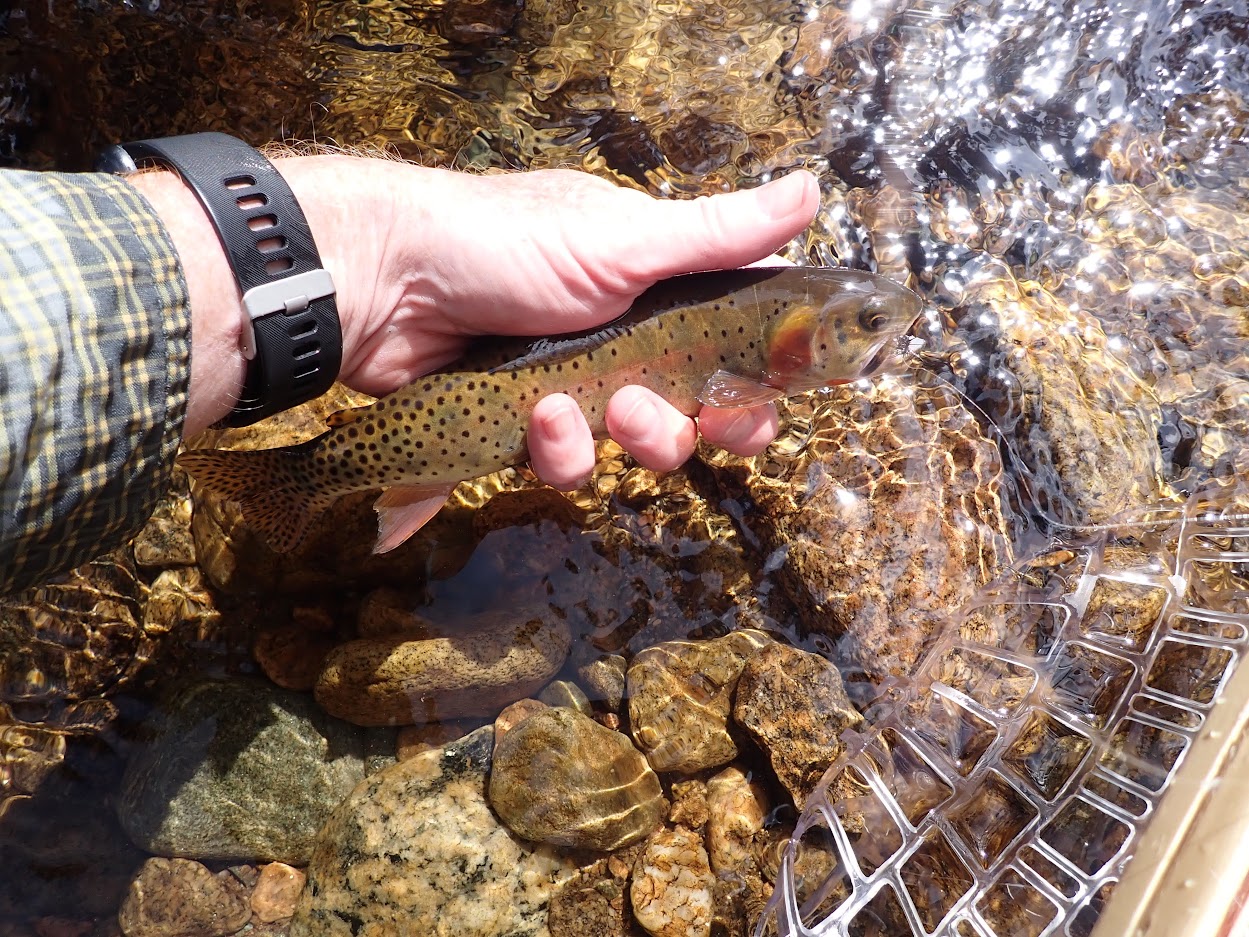 What a pleasant surprise Thursday evolved into! I went from resigning myself to not fishing. to landing twenty-three high country jewels. All the trout that occupied my net were cutthroat trout, and this result was very satisfying. I will hopefully be returning again before the end of the 2020 season.