Location: Within one mile east of Tunnel 2

Jane and I had tickets for the Cardinals vs Rockies game on Friday evening, so my fishing options were limited to relatively close destinations. The closest choice was Clear Creek, so I made the short drive to the narrow canyon west of Golden, CO on Friday morning. Traffic was flowing reasonably by the time I left the house around 9:30AM, and I arrived at a very wide pullout on the south side of US 6 east of Tunnel 2 by 10:15. 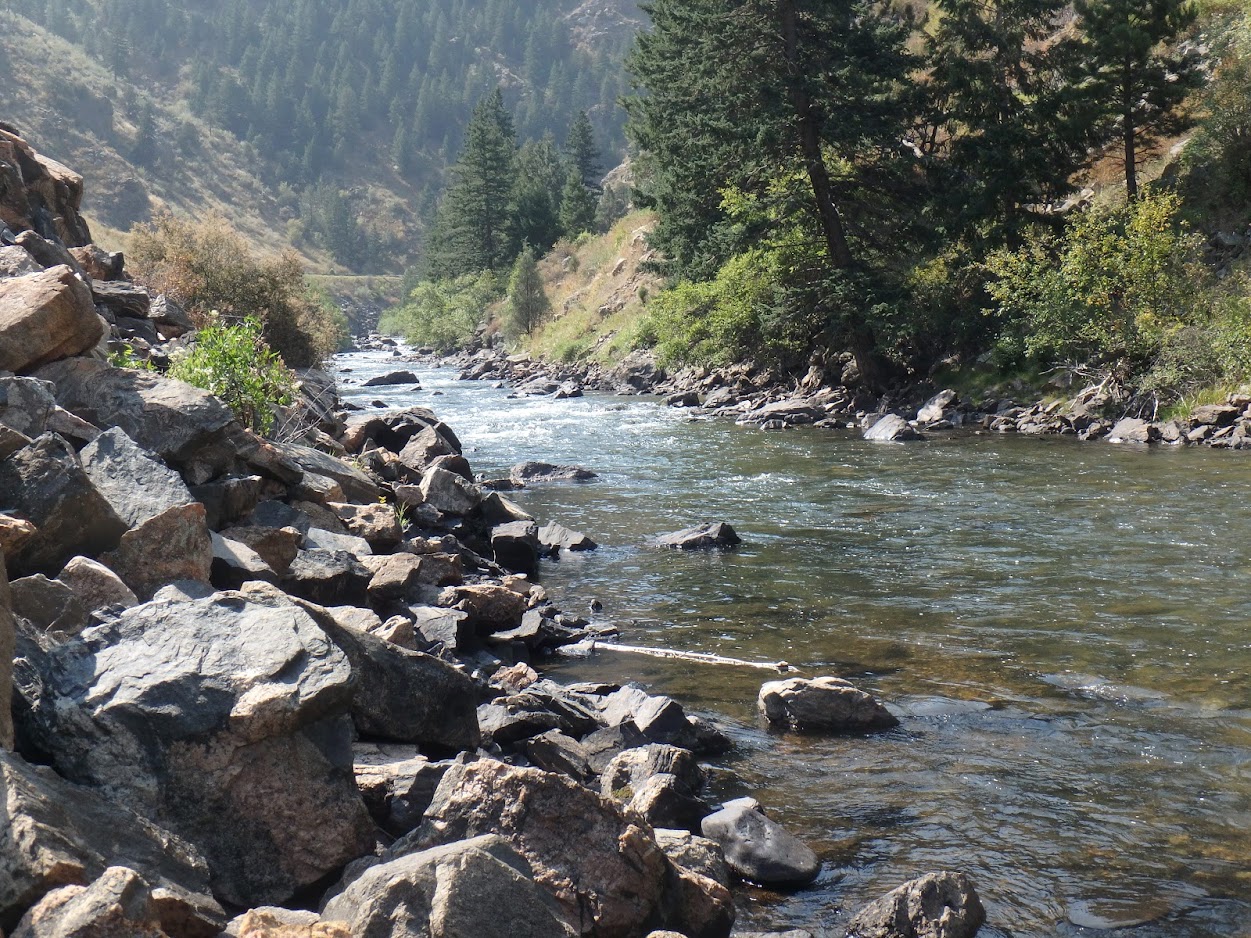 The high temperature for Denver was projected to reach ninety degrees on Friday, so I elected to wade wet, and this decision proved to be appropriate. I rigged my Orvis Access four weight for small stream fishing, and I ambled along the shoulder of the highway for .2 miles, until I found a reasonably safe spot to negotiate the steep rocky bank to the creek.

Jake’s gulp beetle historically yielded excellent results on Clear Creek, so a size 10 foam terrestrial became my first fly choice. I lobbed it to likely deep spots, and I observed a few looks, but the trout failed to open their mouths, before they dropped back to the stream bottom. Unwilling to deepen my frustration, I switched to a size 16 gray deer hair caddis, and this matched the small naturals that covered the streamside boulders. 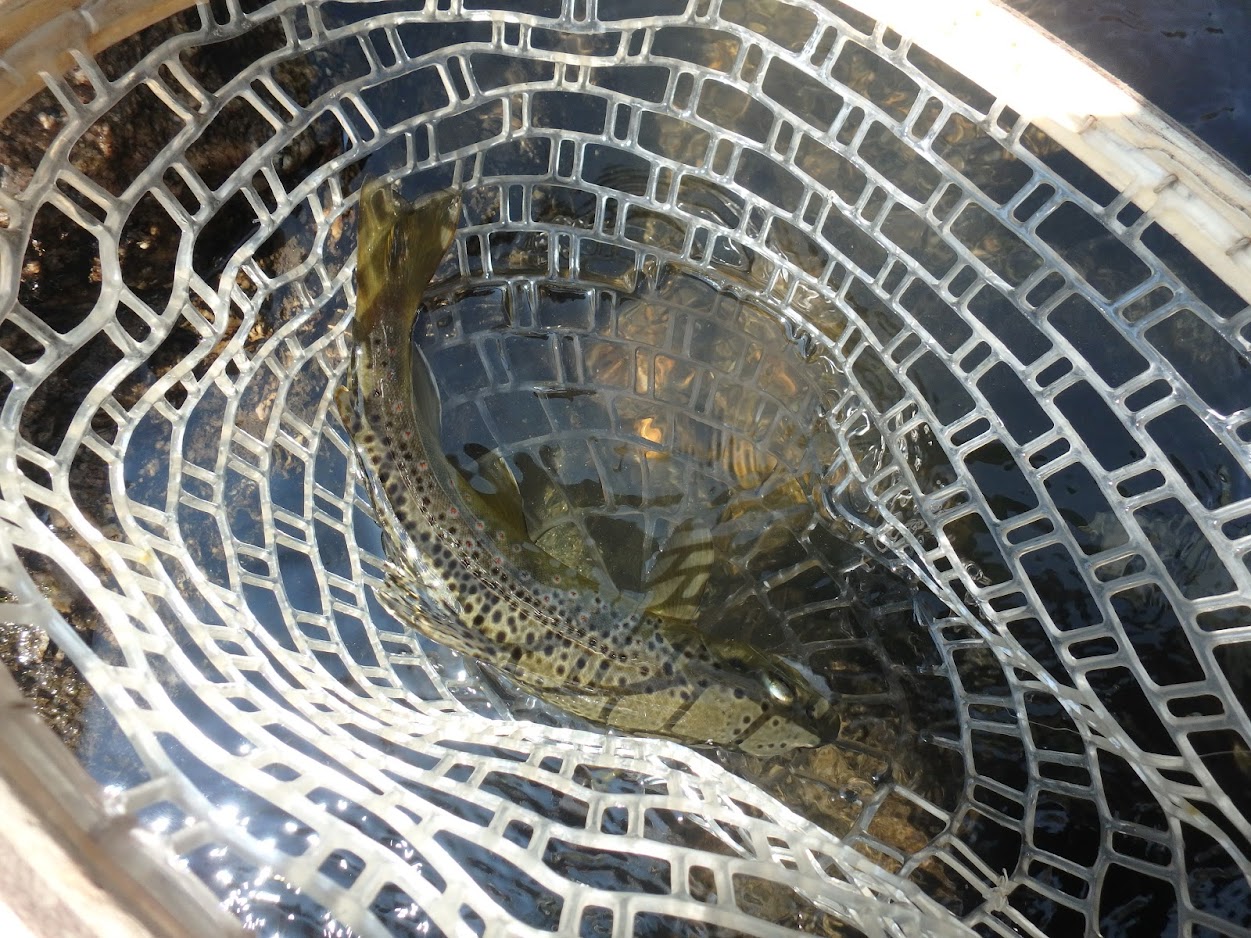 My move was immediately confirmed as a winner, when I tossed the caddis to a deep hole below a large exposed boulder situated along the bank. As I looked on, a decent brown trout slowly elevated to the surface and sipped the caddis impostor. Needless to say I was very pleased. I methodically worked my way upstream along the left bank and added another representative brown that was quite nice for Clear Creek but smaller than the first netted fish. A pair of smaller brown trout followed, but then a series of refusals ruined my state of fly fishing bliss.

The water type shifted to fast runs and deep pockets, and I speculated that perhaps the Jake’s gulp beetle might be more effective and surely more visible, so I made the switch. Initially the foam beetle accounted for fish number five, but then it lapsed into another ignored or rejected dry fly. At this point I paused for lunch in a rare shady location overlooking a gorgeous run and pool. The deep center run cut the pool in half and created two very attractive shelf pools on each side.

After lunch I extended the leader by eighteen inches, and I exchanged the Jake’s gulp beetle for the size 16 deer hair caddis that provided success during the morning. By now the sun was directly overhead, and its rays beat down on the river and anyone attempting to fly fish in the canyon. Apparently the fish were affected as well, because the same caddis that yielded confident takes in the first 1.5 hour now provoked tentative looks at best. I persisted, however, under the mistaken belief that the right spot along the bank would yield positive results in spite of the bright blue sky and soaring air temperatures. 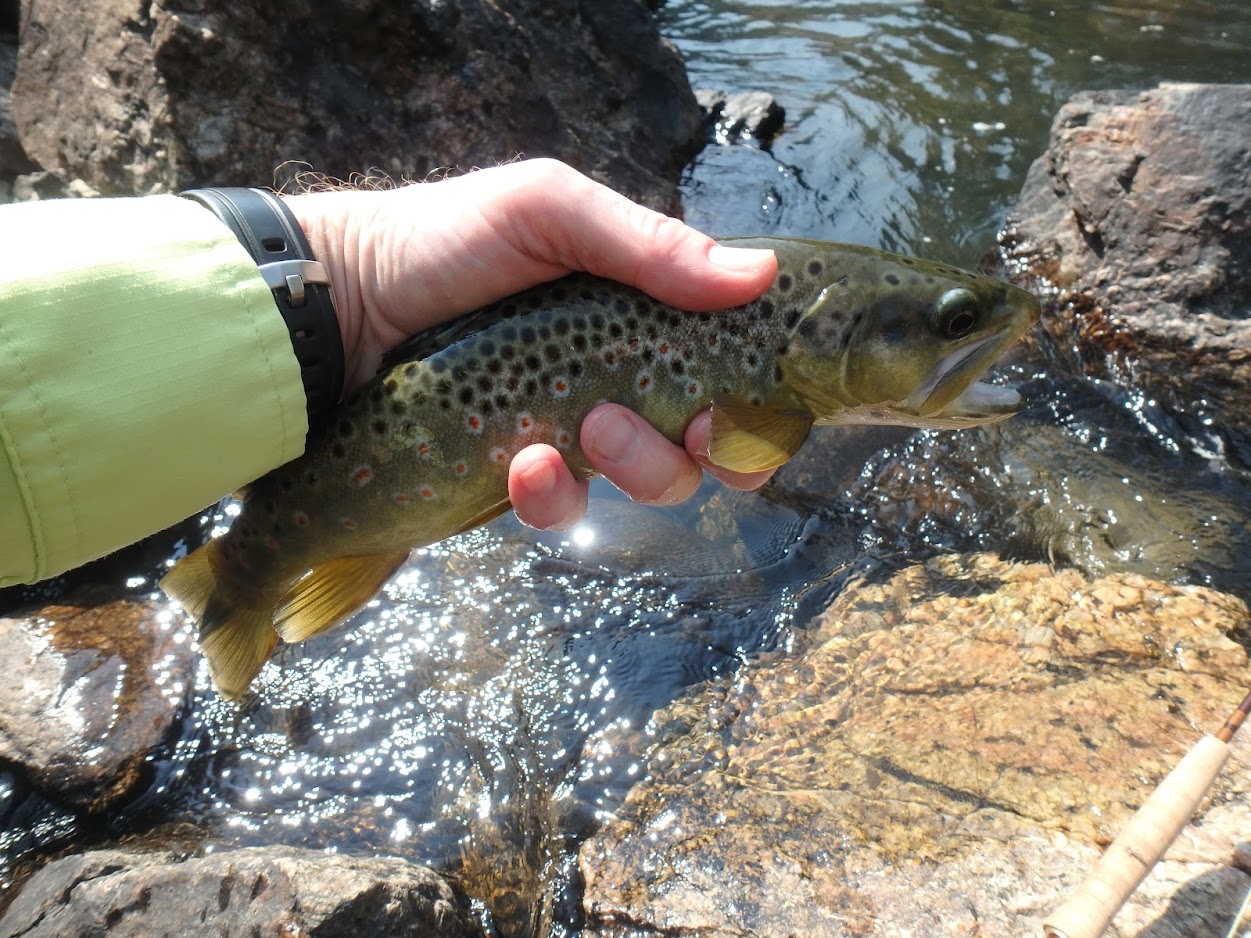 After an hour of dry fly frustration I decided to try one last approach before I surrendered to the heat and exited the canyon. I tied a size 12 Chernobyl ant to my line and added a beadhead hares ear as a dropper. Initially I cast this combination to similar locations as those prospected with the dry flies, but after another lull in action, I began to focus on faster deep runs and frothy sections at the top of pockets and riffles. A small brown trout grabbed the hares ear, and my method was finally vindicated.

I moved along and experienced a couple momentary hook ups, but then the small yellow indicator on the Chernboyl began to twist around on the underside of the body. The top fly was not drifting topside up, so I replaced it with a size 14 chubby Chernobyl with a brown body. With the more buoyant surface fly I added a second dropper in the form of a size 16 yellow caddis pupa. I continued to target the faster aerated spots in the creek, and the deep nymph approach paid dividends, when two brown trout mashed the caddis pupa, as it began to swing at the end of the drift. 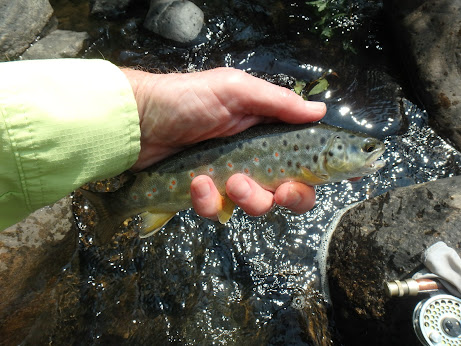 Just before two o’clock the chubby paused in the middle of a current seam, and I responded with a quick hook set, but after feeling some weight for a split second, the line went limp. I stripped in the line and discovered that the hares ear and caddis pupa were missing, as apparently I tied a bad knot between the chubby and the upper nymph. I was within minutes of when I planned to quit, so rather than undertaking the task of tying two replacement flies to my line, I climbed the very steep rocky bank to the highway and paced back to the Santa Fe.

Late August is typically a slow time for fly fishing in Colorado on freestone streams, and the hot weather added to the challenge, so I was pleased to land eight trout in 3.5 hours of fly fishing on Friday. Hopefully I have more time next week, and that will enable some longer trips to tailwaters in Colorado.