Dan and I made plans to fish after work on Friday, May 18 at Clear Creek. I planned a retro day and wore my old fishing shirt and took my Fenwick fiberglass fly rod out of mothballs. I was still waiting for my repaired Sage rod, so I let Dan use the Loomis five weight that he has become comfortable with, and I dusted off the old fiberglass since it is a short rod and better for small streams such as Clear Creek.

A change of weather was rolling in to Denver and the skies were overcast most of our time on the stream. Dan met me at the Woolly Mammoth parking lot near the geologic cut out and we continued in my car to the parking lot at the start of the bike trail off the Hidden Valley exit of interstate 70. We hiked down the trail to the area where the creek widens near the large green Blackhawk road sign on I70. Dan waded across to the north bank and I worked up the south or left bank. I began fishing with a yellow Letort hopper and added a beadhead hares ear dropper approximately 2.5 feet below the hopper. Dan used the same flies with a shorter dropper. 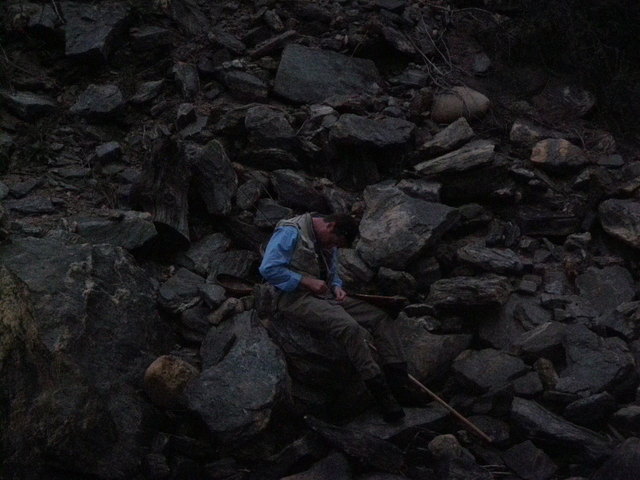 Dan Ties on a New Fly Along Clear Creek

In short order Dan landed a small brown, but it took me half an hour or so to connect with my first fish. Over the next 1.5 hours we paralleled each other as we worked up along opposite banks. I landed one more fish in the last half hour. Dan landed a second fish as well but earlier in the two hour window of fishing. I probably failed to land an additional four or five fish after making a hook up. I attribute this to the soft nature of the fiberglass pole, and my failure to adjust my hook set technique to accomodate the increased flex deep into the trunk of the rod. 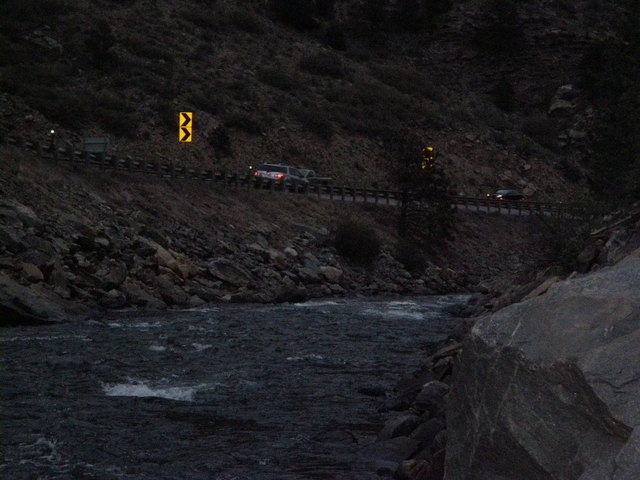 Dusk on Clear Creek Along Interstate 70

Fishing during the last half hour was very challenging as there was a glare on the water in the dwindling light. I switched the top fly to a parachute hopper during this time to gain better visibility of the white wing, but this only marginally improved things.