Was I padding my numbers? Perhaps a bit, but I really enjoyed my evening on Clear Creek on Wednesday, May 9. Making the relatively short 45 minute drive to Clear Creek just east of Idaho Springs and fishing into the evening when the sun dropped behind the mountains and the air cooled reminded me of evening fishing in Pennsylvania when I began fly fishing.

I threw all my gear in the back of the Santa Fe when I got home from work and departed for the mountains. I had to maneuver through some heavy traffic on I70, but still managed to arrive at Clear Creek by 5:00PM. Initially I planned to fish upstream from the Hidden Valley exit, but there were road construction workers up ahead on the road, so I decided to turn around and park at the bike path trailhead and walk downstream. I hiked down the path beyond my previous furthest point and entered where Clear Creek fans out from its normal narrow chute. 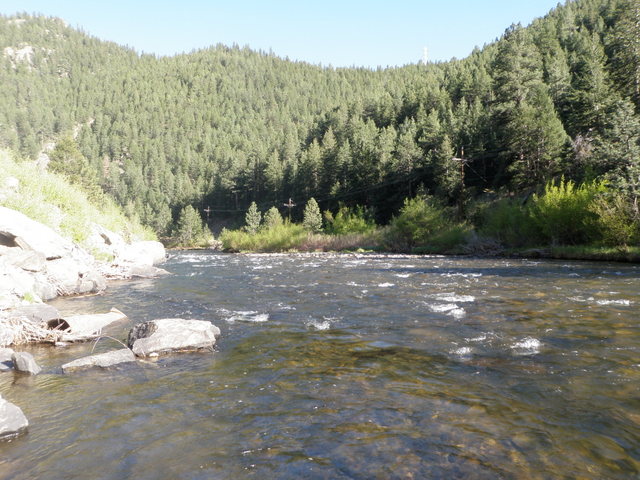 I tied a nice dark olive deer hair caddis to my line and began casting in some very attractive water at the tail of a run over moderately deep water. There were caddis in the air, so I was hoping to get some action on top before resorting to nymphs. However, I covered the nice twenty foot run with no signs of interest from any fish, and the fly was difficult to see in the sun glare and the swirly water, so I elected to tie on the tried and true yellow Letort hopper with a beadhead hares ear nymph dropper.

It didn’t take long before I hooked and landed a small brown on the hares ear as I moved up above the long run to some shallower pocket water. At this point the stream was shallow enough that I could cross, and I concluded that the north or right side of the stream would remain in the sun longer, so I made the move and worked my way up along the right/north bank.

For the remainder of the evening I scrambled over the rock embankment and popped casts to the likely deep slower moving pockets along the north bank. I landed an additional fourteen brown trout mostly ranging in size between seven and ten inches with perhaps two or three stretching the tape to eleven inches. I caught a few no counters and had numerous long distance releases and refusals. The key was to keep moving and not dwell on spots where a fish showed but wouldn’t take. As time passed I also found that the fish liked to hit the trailing nymph as I lifted the rod to make a new cast. Of the fifteen fish landed during the evening two inhaled the hopper and the others bit the hares ear. 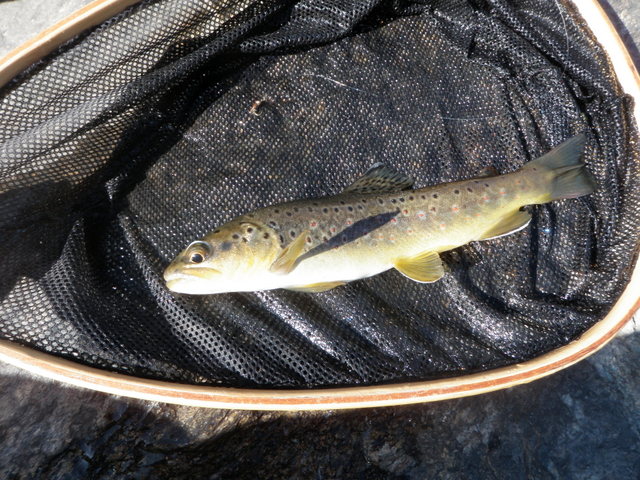 By 7:30 the air had chilled to the point that my hands were cold, and the sun disappeared behind the mountains to the west. I decided to scramble up the steep bank to the shoulder of interstate 70 and walk back to a point where I could cross and return to the car.

Yes, the fish were small, but I enjoyed my evening and remembered fishing during cool spring evenings in Pennsylvania on the Monocacy Creek and Little Lehigh Creek. I’ll do it again if the snowmelt holds off.