A two hour session on Clear Creek on Saturday afternoon along with a weather forecast that included five straight days with high temperatures in the upper seventies encouraged me to make another short drive to the canyon west of Golden. I considered Boulder Creek and Bear Creek, but the flows on Clear Creek were comparable to Saturday, and I decided to take advantage of the close destination, before true run off blasted down the freestone waterway. The downside to Boulder Creek is the highway construction taking place in the canyon west of the city. Bear Creek was an interesting option, that I hope to explore in the near future, if flows remain manageable.

I followed my normal morning routine including my workout and run, and this delayed my arrival at a pullout along westbound US 6 until 12:30PM. I am convinced that the best fishing early in the season is in the afternoon, so the later arrival conformed to this assumption. Since it was nearly noon, I ate my lunch in the car, before I launched my fishing preparation routine that included assembling my Sage four weight. I like the extra length and stiffness of the Sage in canyon situations, when wind inevitably becomes a factor. 71 degree temperatures allowed me to fish with only a short sleeved undershirt and a fishing shirt, and I was comfortable during my stay on the creek. 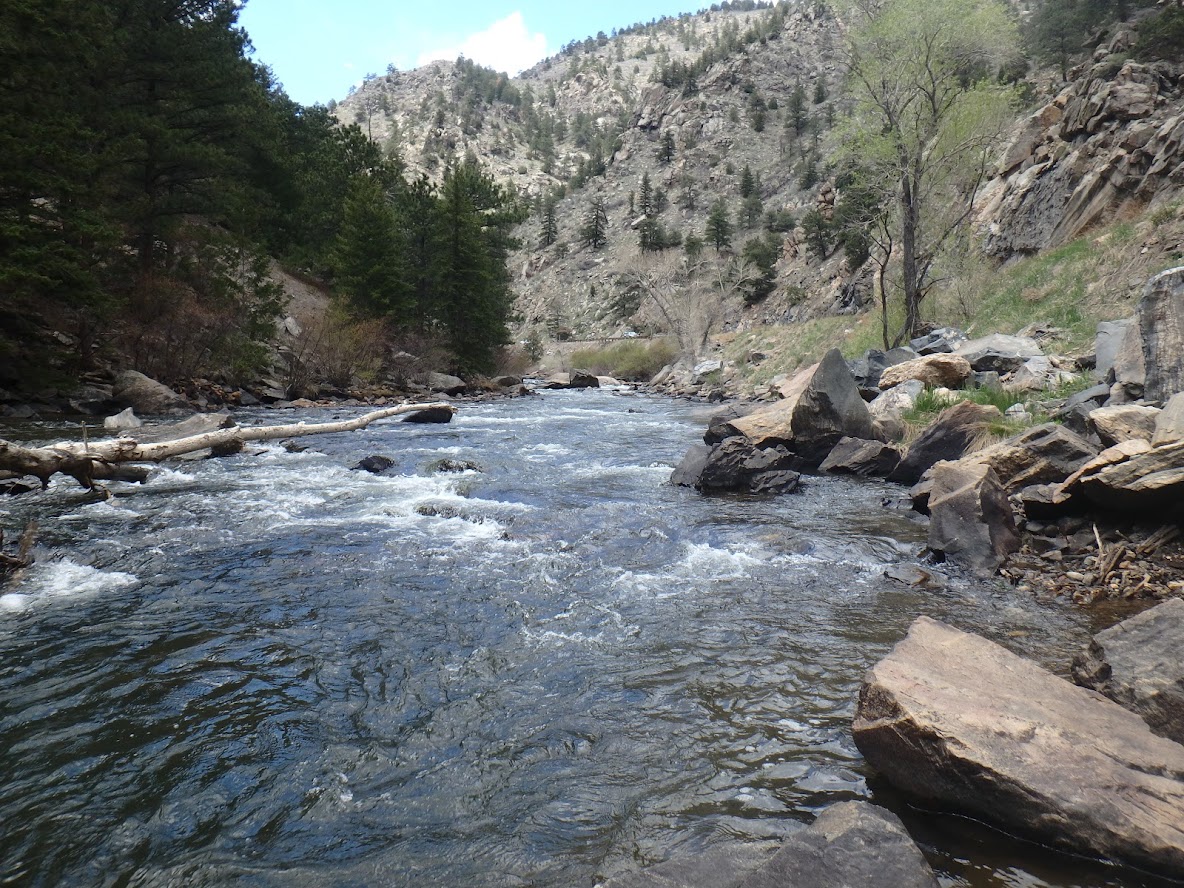 I ambled east along the shoulder of US 6 for .2 mile, and then I scrambled down a rocky bank to the edge of the stream. Like Saturday the flow was ample at 70 CFS, but structure remained easily identifiable for prospecting. I configured my line with a yellow fat Albert for flotation and visibility and then added my traditional spring nymphs of an ultra zug bug and beadhead hares ear. I progressed upstream between 1PM and 4PM and netted nine wild brown trout. As was the case on Saturday, most of the trout were in the eight to ten inch slot, although I was pleased to extract a nice twelve incher on a downstream drift in some slack water along the opposite bank. A foot long fish from Clear Creek is a trophy. 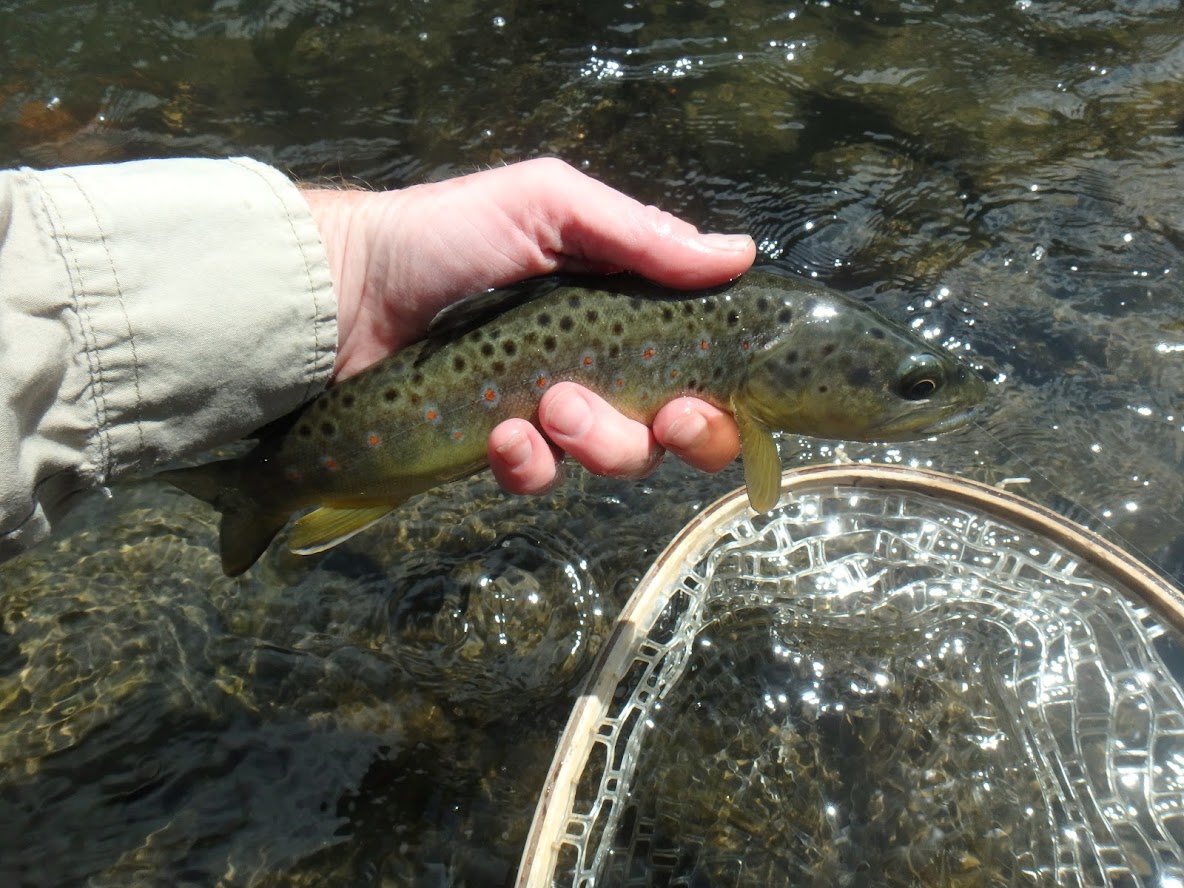 Best Fish by Far on Monday

Nine in three hours is an above average catch rate; however, I would not describe the action as easy pickings. I covered a fair amount of stream mileage and fired off a generous quantity of casts to achieve this fish count total. In the first hour refusals to the fat Albert were also part of the equation, but that annoyance seemed to fade as the afternoon advanced. It seemed that casts to very slow shelf pools were the primary initiators of nips and rejection.

When my tally climbed to nine, I focused on attaining double digits, and as is usually the case, the fish began to ignore my offerings, when a goal was within reach. Some heavy clouds rolled above the canyon, and I spotted a very sparse blue winged olive emergence. I decided to react to this observation, and I swapped the hares ear nymph for a soft hackle emerger size 20. This move paid dividends, when a small brown trout grabbed the BWO wet fly, as it began to swing and lift at the end of a drift. 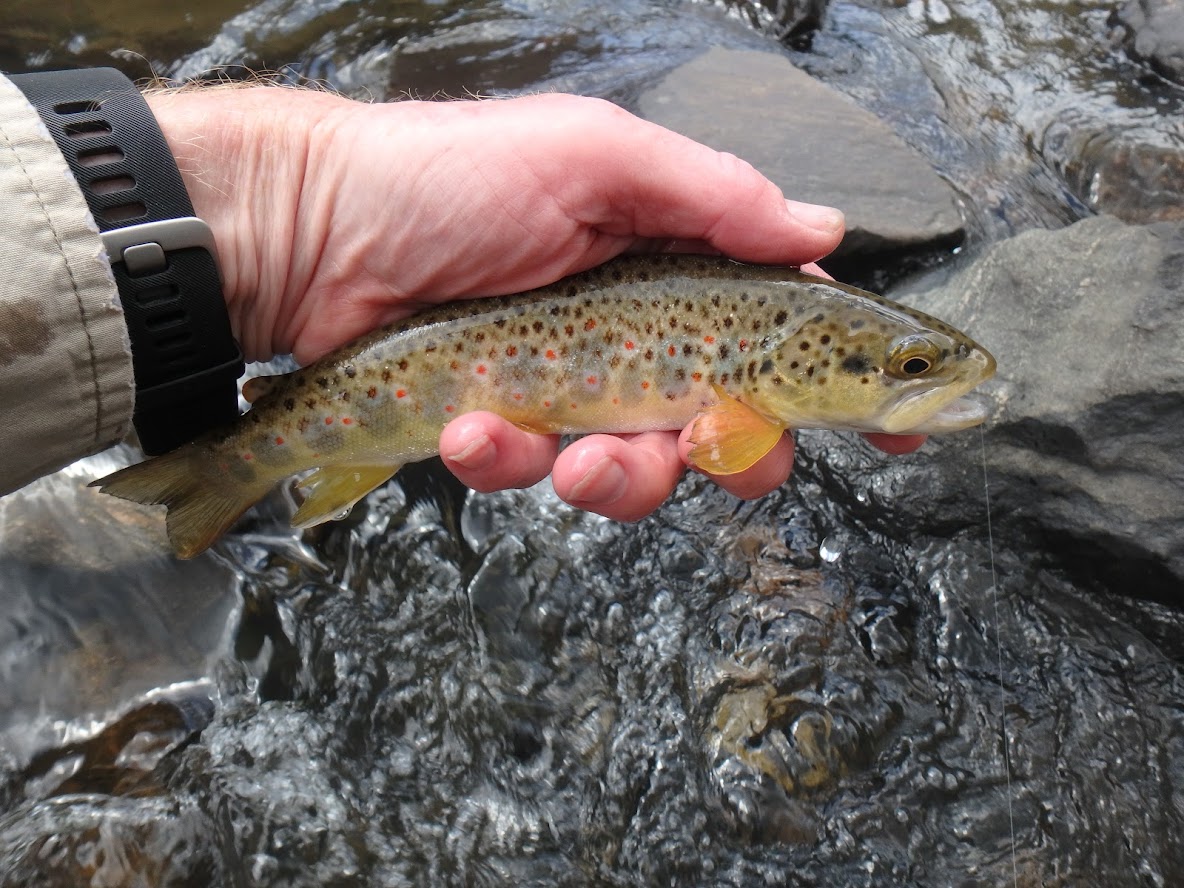 I glanced at my watch and noted it was 3:50PM, so I decided to test a dry fly for ten minutes. The yellow fat Albert attracted attention, so I plucked a size 14 yellow stimulator from my fly box and spent the remaining time prospecting two nearby shelf pools. Again some clouds blocked the sun, and this created some difficult glare, which made following the size 14 dry fly difficult. My experiment failed to translate to success, but it partially satisfied my curiosity of whether a smaller dry might be a winner on Monday, May 13.

Once again the fish that I landed were small, and although the action was not exceptional, it was steady and held my attention. I must admit that I now feel a strong urge to tangle with some larger fish, and Tuesday may fulfill that wish. In spite of my fears over clarity, the stream was crystal clear and exceeded my expectations for May 13.