The name Chernobyl ant conjures images of a small black ant wandering among the fields of Russia after the Chernobyl nuclear power plant disaster. During its journey it encounters a heavy dose of radioactivity and immediately takes on a bright glowing sheen and then mutates to a specimen that is one hundred times larger than its original size. The Chernobyl ant story that lurks in my mind is worthy of a comic book saga and could potentially overshadow Spiderman.

The Chernobyl ant has been a mainstay in my fly boxes for over fifteen years, and I suspect it will occupy an elevated status for as long, as I continue fly fishing. The story of my introduction to the Chernobyl ant is chronicled in my post of 2/1/11, and little has changed regarding my confidence in the over sized ant imitation. I actually suspect the the willing eaters of Chernobyl ants regard them as large beetles and not mutated ants. 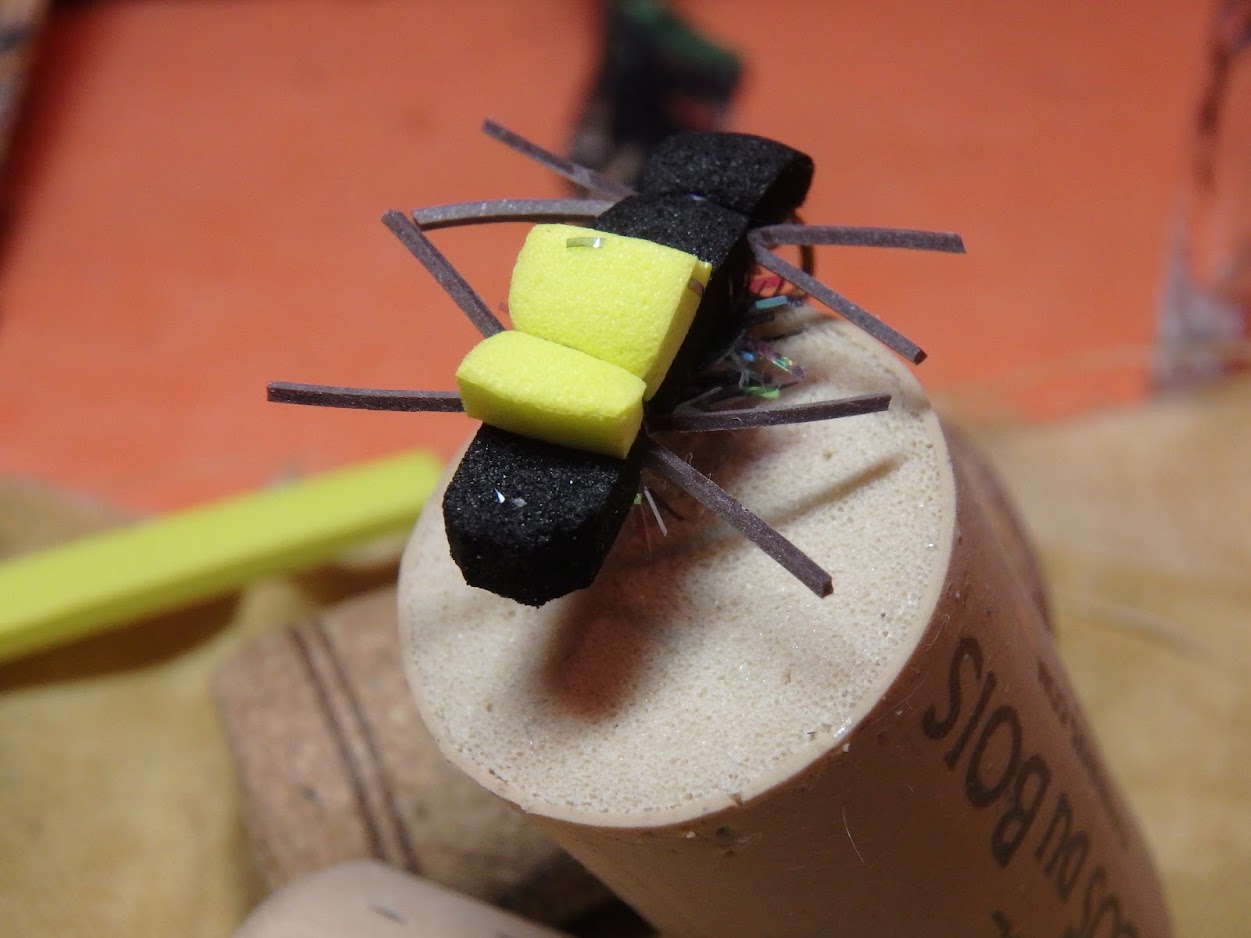 In recent years the fly fishing community seems to have abandoned the classic Chernobyl ant for a steroidal variation called the Chubby Chernobyl. These bizarre concoctions possess two large plumes of poly yarn on the upper shell of their bodies; but the view from beneath is likely similar to that of the classic Chernobyl ant. I find the Chubby’s to be awkward to cast, and they require a heavy dose of floatant applied to the wings to prevent them from getting waterlogged. On infrequent occasions I free a chubby from my fly box and give it a fair trial on the water, but the results never seem to suggest, that I should forsake my classic black version for a modern chubby.

A quick read of my post of 02/25/2018 reveals, that I made some minor tweaks to my tying process for this relatively simple foam pattern. Several years ago I began cutting a V in the end of the foam section, that allowed me to tie in the over body at a point on the downward section of the hook curve, and this enabled me to bend the foam back over the hook shank. This simple step resolved the problem of the foam spinning around the hook after several attacks by ravenous trout. I also strongly advocate a section of pearl chenille wrapped around the hook shank between the rear and forward tie down points. The iridescent chenille imitates the peacock sheen that is present on the underside of many beetles. 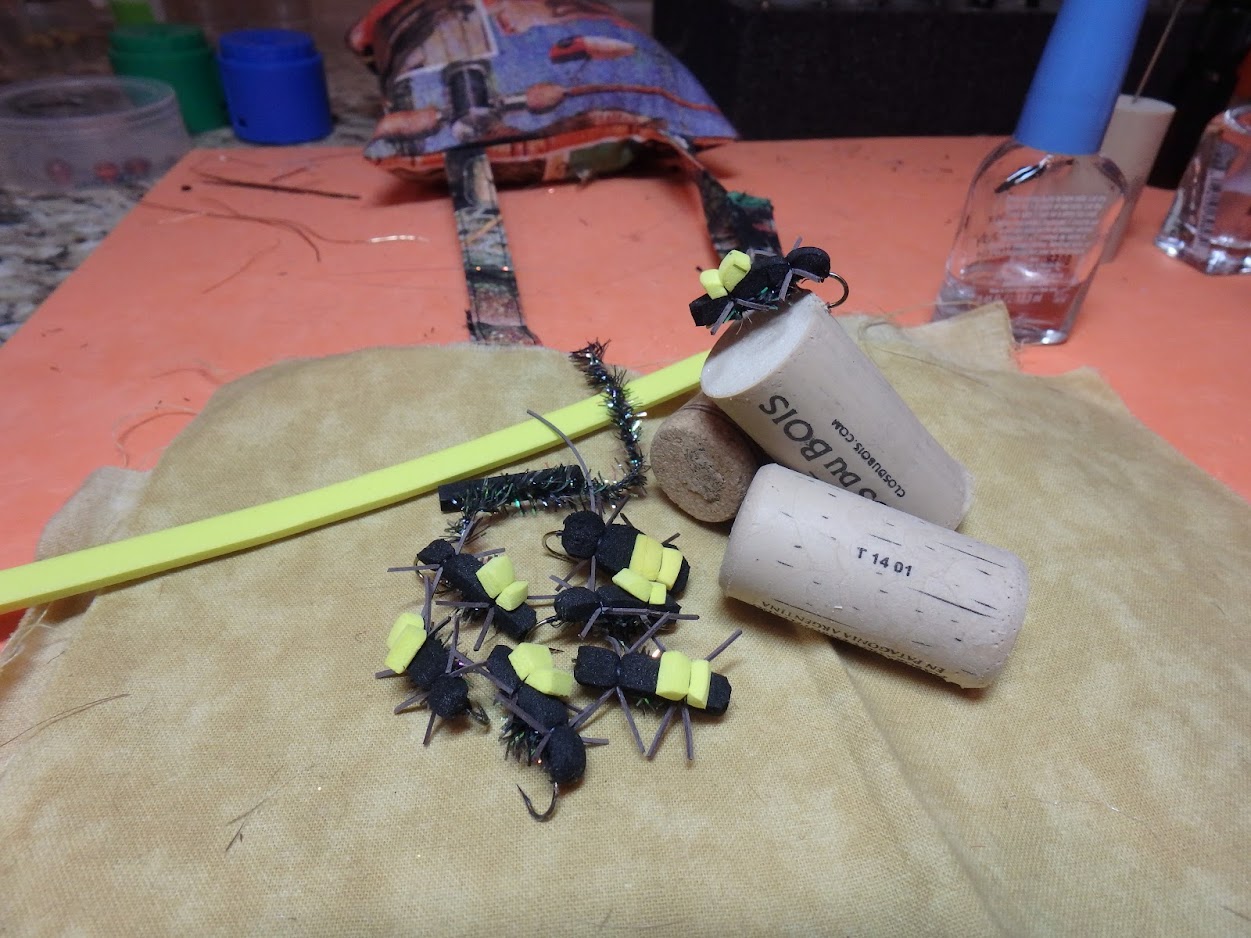 To some extent my reliance of the Chernobyl ant has waned in recent years; as my confidence in the fat Albert, pool toy hopper and hippy stomper increased. Many situations remain, however, where I continue to choose the reliable Chernobyl. Small streams and low water quickly come to mind as prime examples of situations ideal for the mutated ant. The Chernobyl is lighter and makes a smaller disturbance on the water than larger multi-layer flies. Its foam structure and lack of poly elements makes it maintenance free, and this is important in tight quarters where false casting is not possible.

During recent seasons I also discovered that downsizing often encouraged otherwise reluctant trout to crush a properly presented Chernobyl ant. I carry some size eights to support multiple nymphs, but I always stock a supply of size tens in case refusals become the norm. The smaller sizes often result in more takes, but they are harder to see and sink more readily with beaded droppers attached, particularly in turbulent water.

Because of reduced usage my supply of Chernobyl ants remained adequate, but I added seven additional models to my storage bin. Two were refurbished, and the other five were created from a bare hook. The Chernobyl ant will certainly earn its place in my fly box again in 2019.