Jane and I scheduled a trip to Portland, OR at the end of March to visit Amy and help her plant a garden. This was the stated mission, but the real reason was to spend precious time with our sweet daughter. Since Portland has a milder climate than Colorado, we felt this would be a good time to plant the cold weather vegetables.

Well, things worked out more or less as planned. It rained heavily off and on during the entire weekend, but there were enough gaps in the heavy rain that we were able to find the time to prepare two raised beds and plant all the items on our list for the early season. Jane suggested that we work on the garden on Friday as soon as the rain stopped, and her strategy was very effective as we used all the available time on Friday and Saturday when it was not raining to reach our gardening goals. 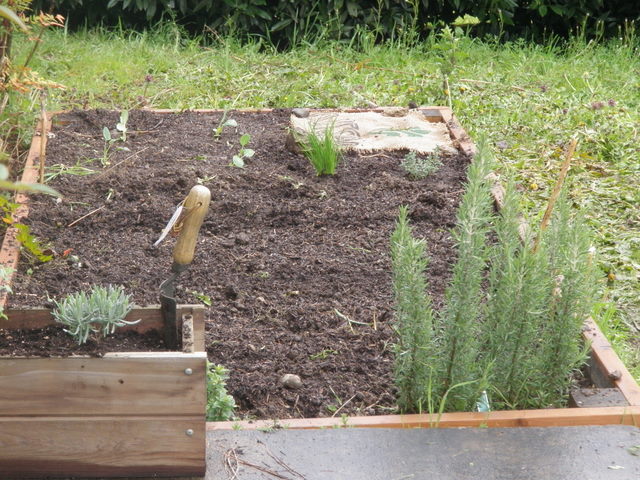 The Raised Bed in Front of House

Amy’s boyfriend, Joe, had already assembled a raised bed in front of the house, so we just needed to prepare the soil and augment the raised bed with some compost in order to be ready to plant. The area facing south along the side of the house required more work, so on Saturday we prepared the soil and then persuaded Joe to build a second frame for a raised bed. Once Amy and Joe secured the corner posts and attached the frame, we added three bags of compost and had a second raised bed. 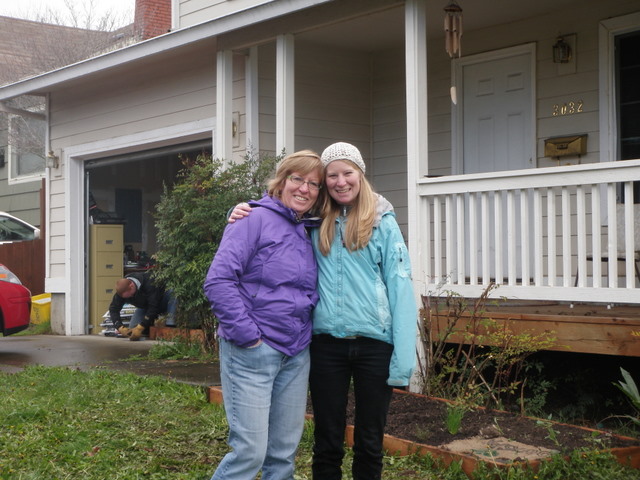 During the course of preparing and assembling the raised beds, someone asked the obvious question, why raised beds? I replied with a couple legitimate reasons, but upon further research came up with additional justification. One of the primary reasons is that it prevents soil compaction. If the beds are constructed properly, all areas can be reached from the surrounding pathway thus no need to walk on the soil and compact it. Also related to this is the ability to space plants closer due to the lack of pathways within the bed. Because the bed is raised, it typically drains better than level soil, and in a wet climate such as Oregon, this is important. The soil can be better controlled as the bed consists mostly of additives such as topsoil, fertilizer and compost. Another benefit is the garden is closer to the gardener as signified by the name, raised bed. 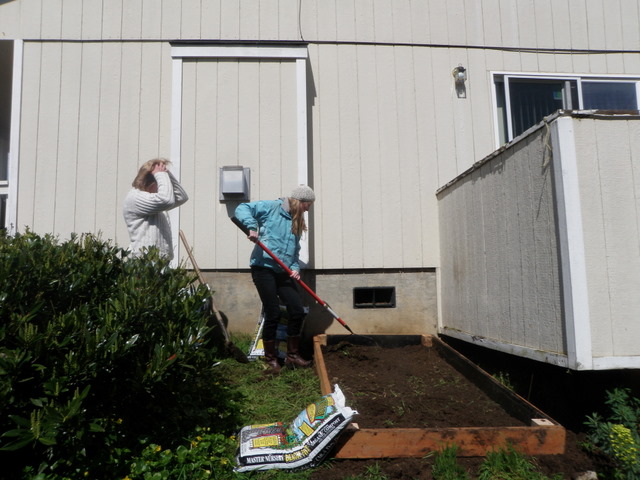 After our efforts,  Amy and Joe’s garden held radishes, spinach, onions, beets, leaf lettuce, kale, thyme, chives, brocolli, brussel sprouts, catnip and lavender. Unfortunately the catnip was under attack almost instantly by Joe and Amy’s cats, but it was entertaining to watch nonetheless. Even with all these items planted enough space remained to add warm weather plants later in the season.

Now that my daughter lives in Portland, and after having visited numerous times, two things come readily to mind about this exciting northwestern city, and they are rain and food. The rain theme is obvious as we had to work around rain constantly throughout the weekend. But a visitor to Portland soon discovers that the residents do not allow a bit of rain to get in their way. Even under overcast rainy conditions you will still see cyclists and kayakers and hikers and any number of activities taking place. Good rain gear is observed everywhere as well as cozy coffee shops to fight the dampness and warm the soul. Another evidence of the weather is the green landscape everywhere. Winters are wet but mild, and thus the grass seems to be constantly green and flowers bloom early in the season. While we were there, daffodils seemed to be everywhere. 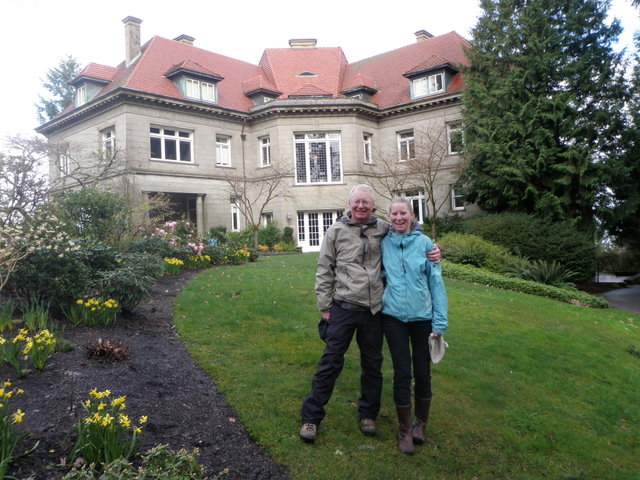 Dave and Amy at Pittock Mansion

If one ventures outside the urban area to forested areas such as the Forest Park area we hiked on Saturday, one will be immediately impressed with all the moss and ferns adorning the landscape. The scenery is quite different from the arid sparse landscape of Colorado. 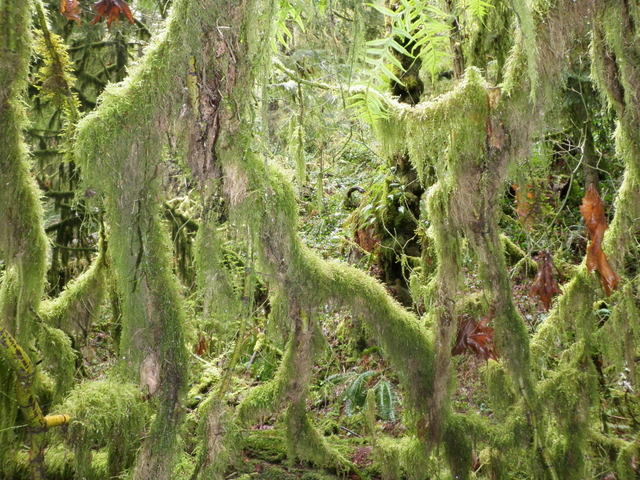 Our second impression of Portland revolves around food. I’m sure the suburbs and outskirts feature the same chains, big box areas and strip malls as any other U.S. city, but the various areas of Portland itself are littered with locally owned neighborhood restaurants and eateries. The hospitality industry must employ 90% of the mushrooming twenty something population. Eateries range from ubiquitous food trucks to small take out locations featuring one menu item to more traditional high end sit down establishments. Another popular Portland fixture are the dessert stops, restaurants that specialize only in desserts. Amy, Jane and I anxiously looked forward to all of our meals in Portland and sampled Mexican, Irish, Thai, and Mediterranean cuisines during out stay. Another Portland favorite and a favorite to us as well is brunch. Brunch can be found everywhere on Saturdays and Sundays. Had we stayed during the week, I’m sure we could have found a brunch offering somewhere on a weekday. 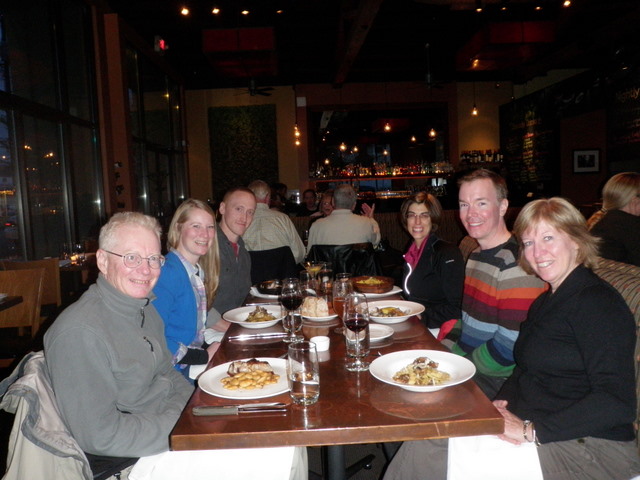 Aaron and Jessica Join Us for Dinner

Our Saturday night entertainment featured watching The Hunger Games at a local cinema. Amy and Jane read the entire Hunger Games trilogy, so they were well versed on the plot and anxious to see the movie treatment of the novels they’d recently completed. Dave, on the other hand, only read movie reviews which were luke warm at best. The plot is a bit of Survivor and American Idol on steroids. Apparently the United States has been divided into twelve districts, and the ruling class holds a hunger games event each year. Two teenagers are chosen from each district, a male and female, and transported to a central location where they will attempt to survive to be the last person left standing. Of course prior to the event there is training, festivities, partying and gambling on the outcome.

The main character is Katniss from district twelve, a poor coal mining region. Katniss volunteers after her younger sister’s name is drawn from the bin. It’s a classic case of brains over brawn, but I won’t give away any more. We all enjoyed the flick quite a bit and were still discussing it on Sunday morning.

When Dave visited Oregon in August to be a driver in the Hood to Coast Relay, he visited Milo McIver State Park along the Clackamas River where he fished for trout. While there he picked up a brochure that described the bat barn and also noticed an extensive array of disc golf courses. With the early completion of our gardening project on Saturday, we were looking for something to do on Sunday. The weather was typically  overcast with intermittent rain showers and we considered going to the coast or up the Columbia River gorge. I mentioned the bat barn, but when we researched it online, we discovered that the bats are present in the summer and probably not an attraction on April 1. 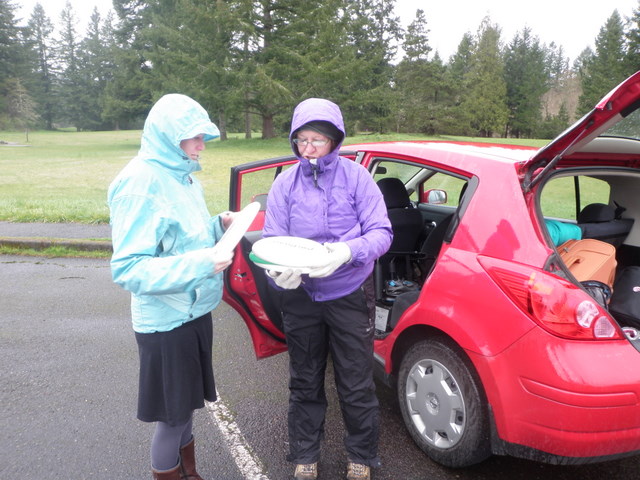 As we discussed it, however, we decided to give the disc golf course a try. For those of you who aren’t familiar with this sport, disc golf is played similar to golf except tossing a Frisbee takes the place of hitting a small white ball with a club. There are 36 holes at Milo McIver but our threesome decided to play only the front nine on the east course. Amy wisely took five frisbees along and it was raining lightly when the three of us emerged from the car at the disc golf parking lot. Amazingly there was a small wooden box with scorecards and maps of the course layout. We elected to not keep score or keep score in our heads. The course we played essentially followed the downstream flow of the Clackamas River, which was quite high and turbid due to all the recent rain. 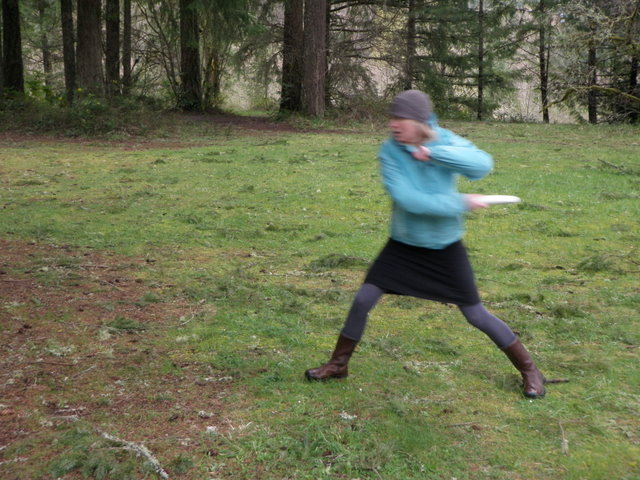 There were tee boxes and “greens” and hazards of many types. The water hazards were probably larger than normal due to all the rain and quagmires created by heavy runoff. The green consisted of a metal post with a cluster of chains hanging vertically from the center post to a circular metal cage below the chains. The idea was to toss a disc into the chains, and then it fell and rested in the cage below. This compared to sinking a putt. We had a great time and were amazed at the number of fellow disc golfers in the rain. These disc golfers took their sport seriously as most possessed multiple frisbees of various sizes for driving, chipping and putting if in fact the same vernacular applies. They also possessed disc golf bags, small rectangular duffles with shoulder straps that were used to transport their assorted discs. It was a whole new world for Jane and Dave. 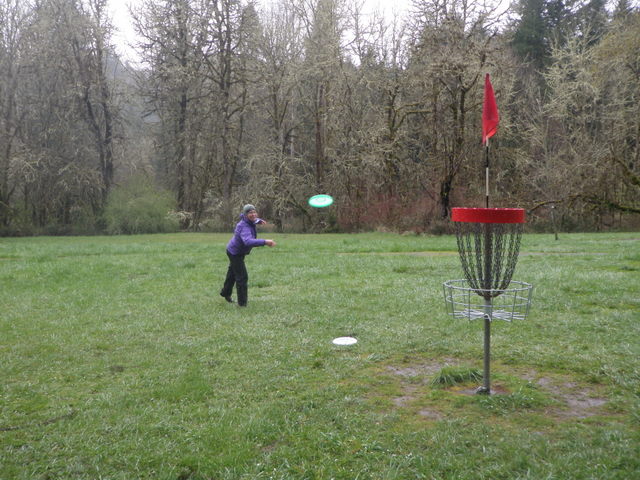 Jane with a Chip Shot