My friend, Dave Gaboury, typically books ten guided float trips throughout the fly fishing season, and he invites me to join him on as many, as I choose to. For 2022 I selected two dates, and the first one arrived on Wednesday, June, 29, 2022. As you will note on my previous post, Dave G. invited me to meet him on Tuesday to fish the club water on the Eagle River. I stayed at Dave’s house in Eagle, CO on Tuesday night, and on Wednesday morning we met our guide, Reed, with Cutthroat Anglers at the Eagle rest area. We stowed our gear in Reed’s SUV, and he drove us to the boat launch just below the CO 133 bridge in Carbondale, where we launched the drift boat for a day of fly fishing. 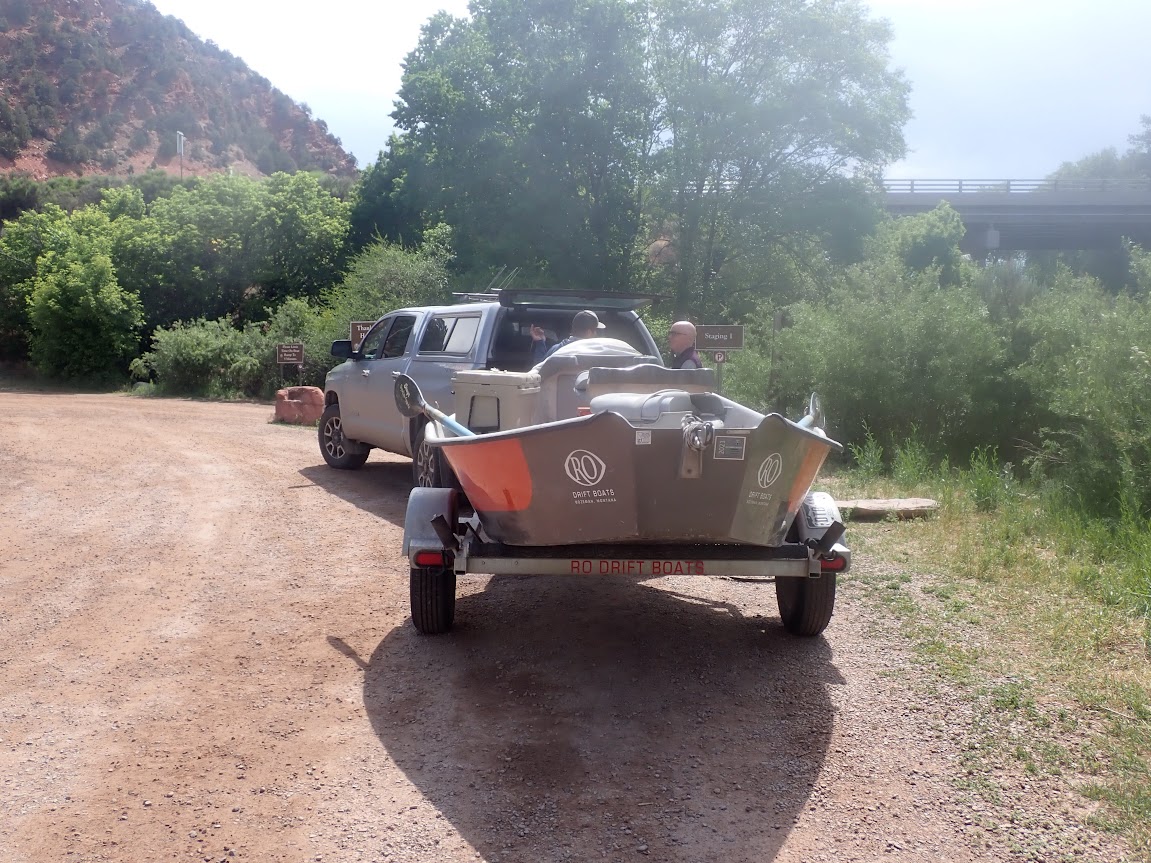 Our Driftboat Ready to Launch

The temperature was in the seventies and very comfortable, as we began at 11:00AM. Two afternoon thunderstorms caused us to pull on our raincoats, and the sky was cloudy off and on for much of the afternoon. The flows on the Roaring Fork River at Glenwood Springs were 1700 CFS. The river was high but very clear and almost ideal for float fishing. We began our trip with Dave G. in the bow, while I manned the rear. We switched positions after a late lunch at 1:30PM. Our mode of operation for the day was pretty consistent. Reed set us up with relatively large dry flies, and we cast double dries to the banks. When we encountered a very attractive long pool and eddy, Reed rowed us into a nose up or rear forward position, so that one of us could shoot long casts upstream. This technique produced positive results quite often. 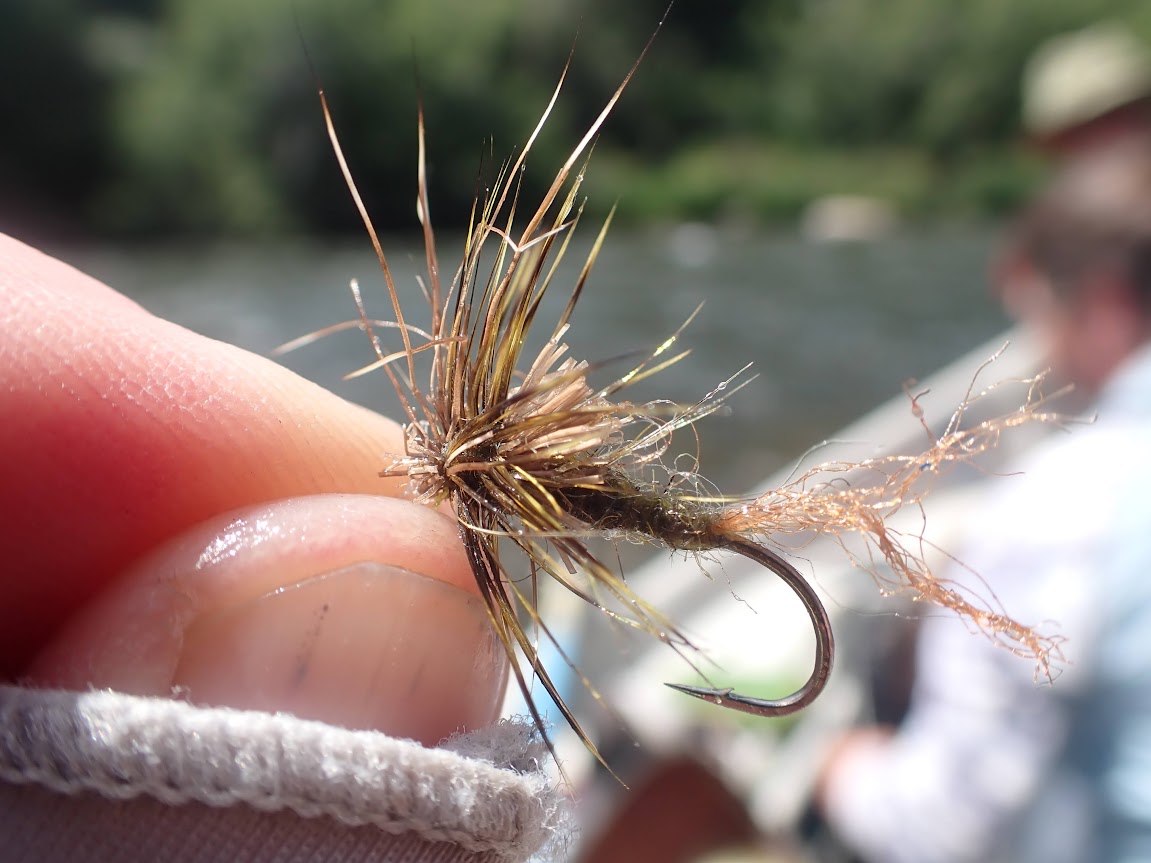 A Cripple Was on the Morning Menu 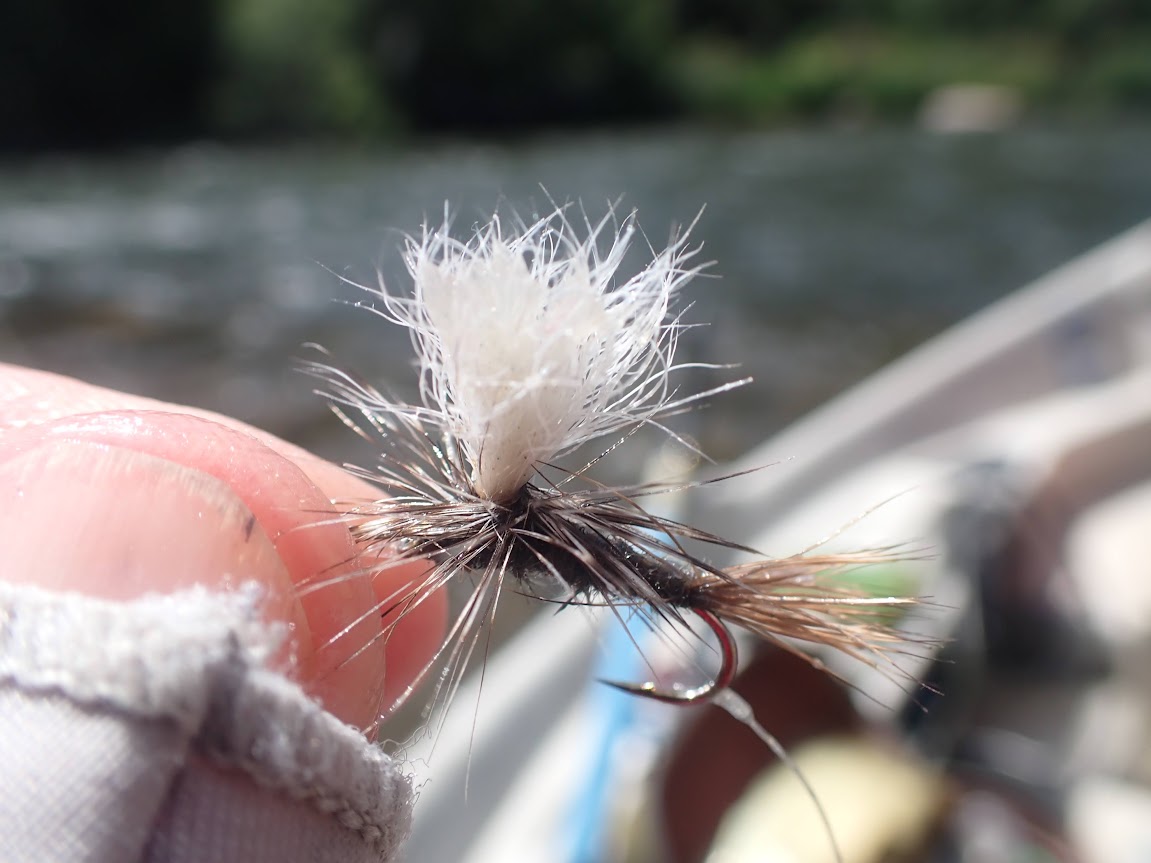 We cycled through quite a few different flies, but the most productive was easily a size 14 or 12 purple haze. Other flies that delivered results during different time frames throughout the day were a parachute hares ear, rusty haze, parachute pale morning dun, and an extended body green drake. 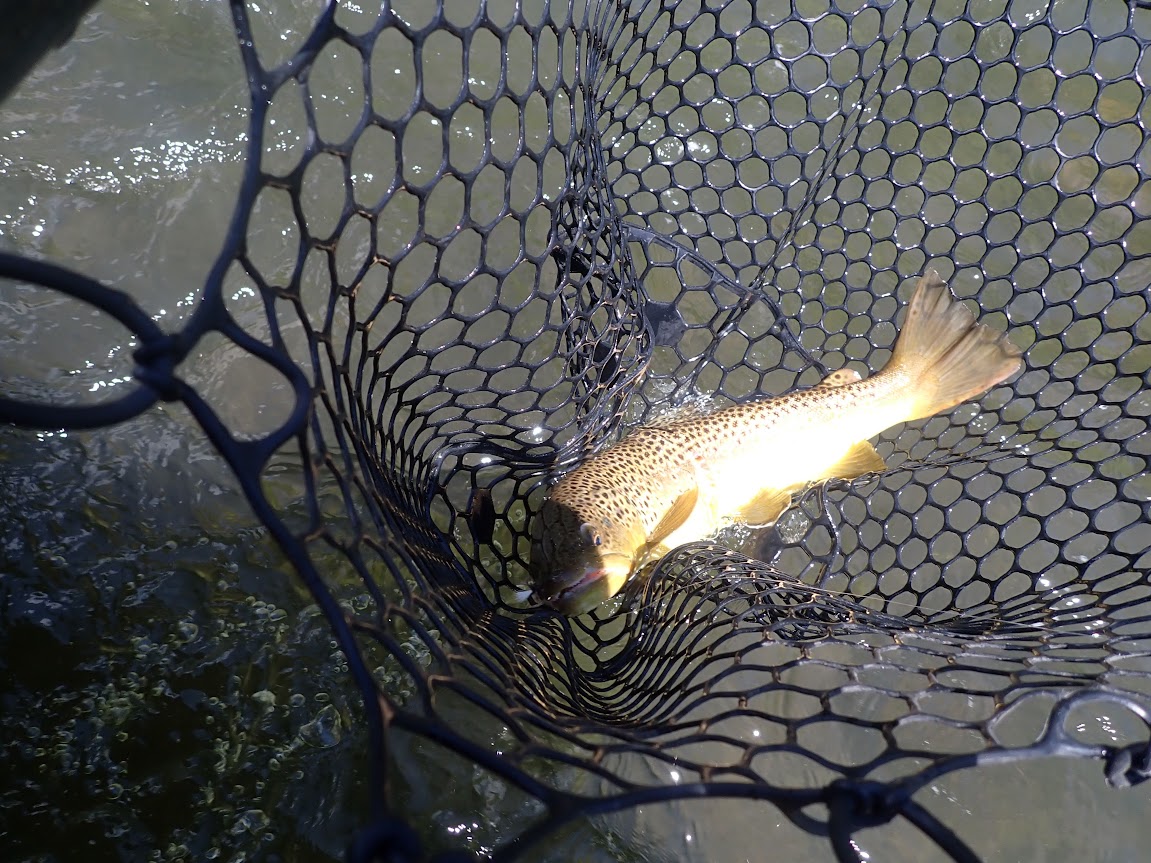 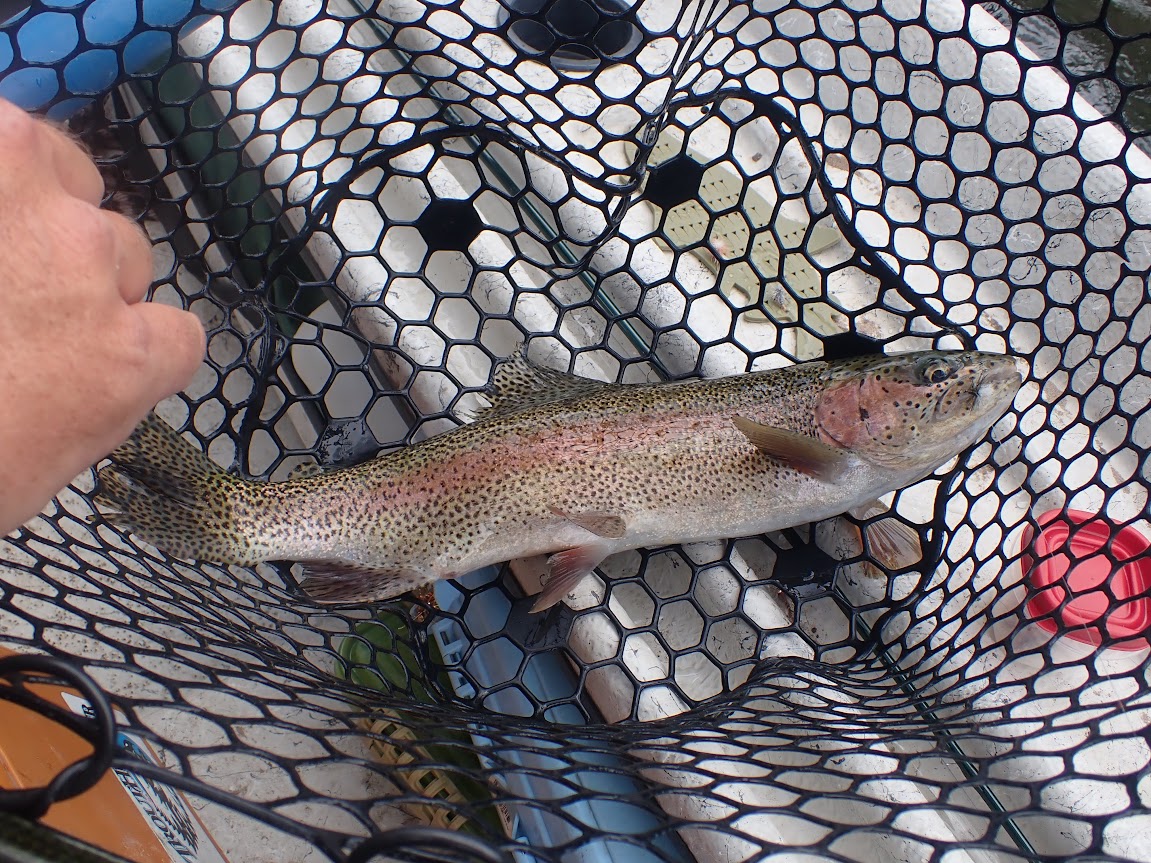 A Quick Shot of a Rainbow

I landed ten fish from the rear position in the morning and early afternoon, and then I more than doubled the fish count to twenty-two by the end of the day from the forward spot. I estimate the mix of fish to have been five cutbows, five brown trout; and the remainder were rainbows. Roaring Fork River trout were a blast to catch, as most fell within the fourteen to eighteen inch range. The fish in this river were not weak, washed out stockers, but thick, wild fighters that featured streaking runs. My arm and back muscles were severely tested by all the fish on my line, and I was pleased to be using 3X tippet to prevent breakoffs. 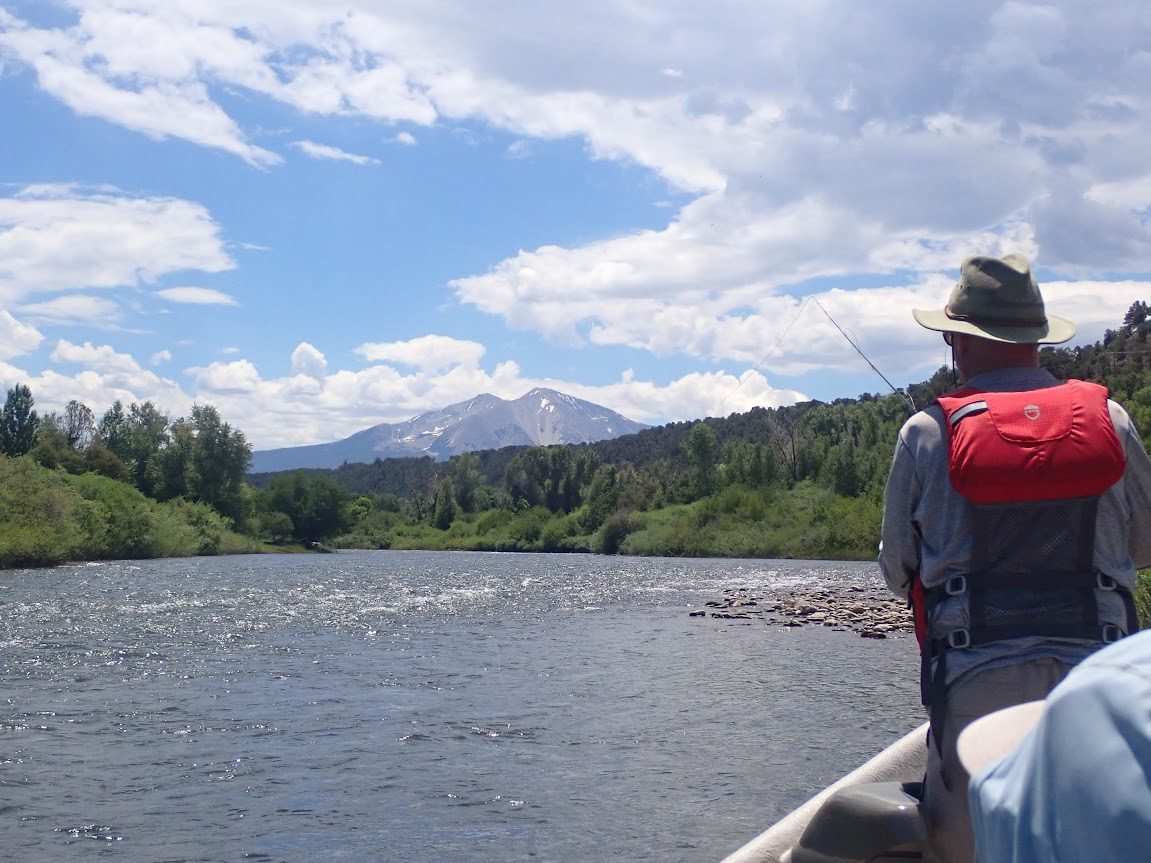 The Roaring Fork and Mt. Sopris

Solid casting skills were definitely an advantage during this type of fast-paced bank fishing. The ability to cast forty feet to locations within a foot of the bank was quite valuable. In addition, reach casts and mending capability enhanced the probability of connecting with trout. My shoulder, neck and arm were very fatigued by the end of our Wednesday adventure. 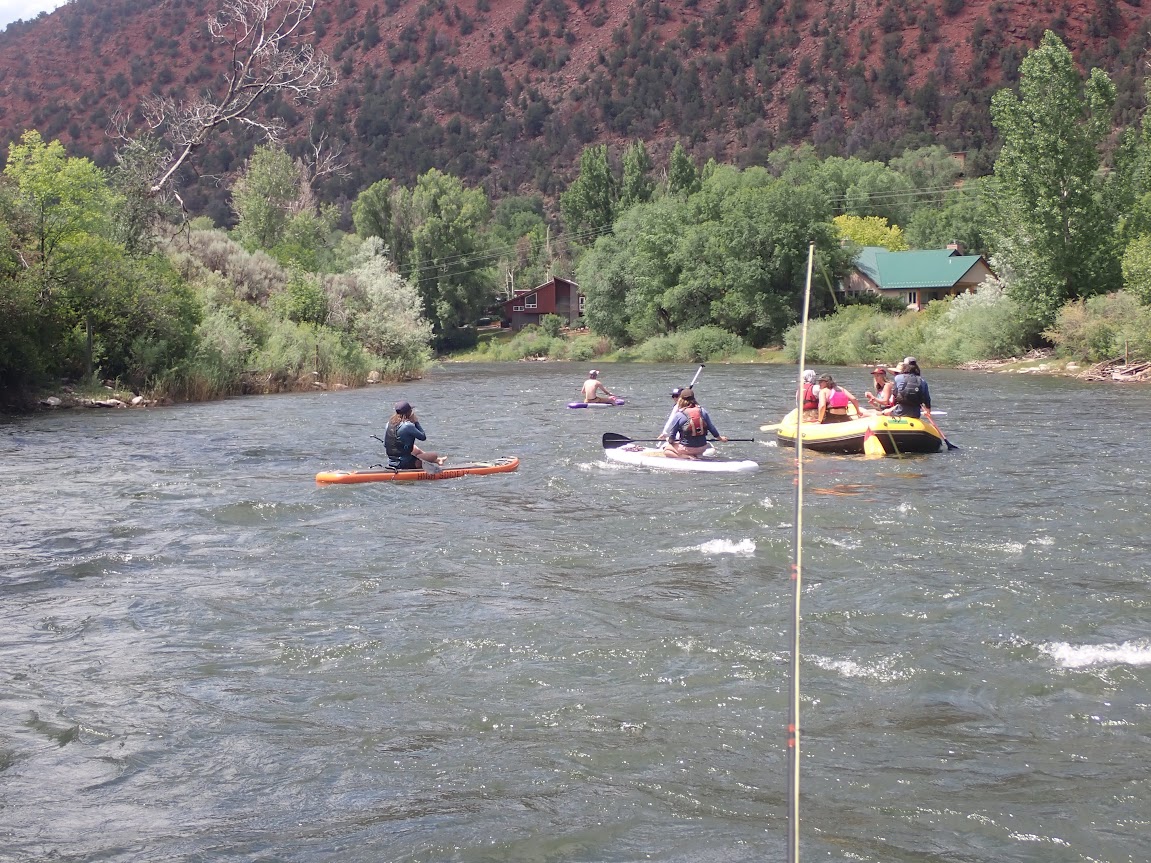 My favorite moments were a pair of slow motion eats in relatively shallow and rocky lies near the bank. Seeing a large fish slowly close on a naturally drifting dry fly after executing an accurate cast is hard to beat. I have one more guided trip scheduled for July, and I am eagerly looking forward to it.