Wednesday was our third day of guided float fishing with Brandon of Cutthroat Anglers. The weather forecast projected temperatures and precipitation similar to Monday and Tuesday, so I wore my waders on board the raft, but ultimately the day was warmer with no rain, and for the first time on the trip I fished with just my fishing shirt and no extra layers. The river on the stretch downstream from South Fork was larger and wider than the Monday and Tuesday beats, but it was very clear and perfect for fly fishing. I manned the bow position in the morning, and Dave G. and I switched positions at 1PM after a lunch break. During our drive to Creede on Sunday I noticed the symptoms of a sore throat, as swallowing created a catching feeling. On Wednesday afternoon I developed a persistent tickle in my throat that caused intermittent coughing. Fortunately the early stages of a cold progressed slowly, and the first two days of the trip elapsed mostly symptom free, but Wednesday signaled the onset of a more severe stage of a summer cold. 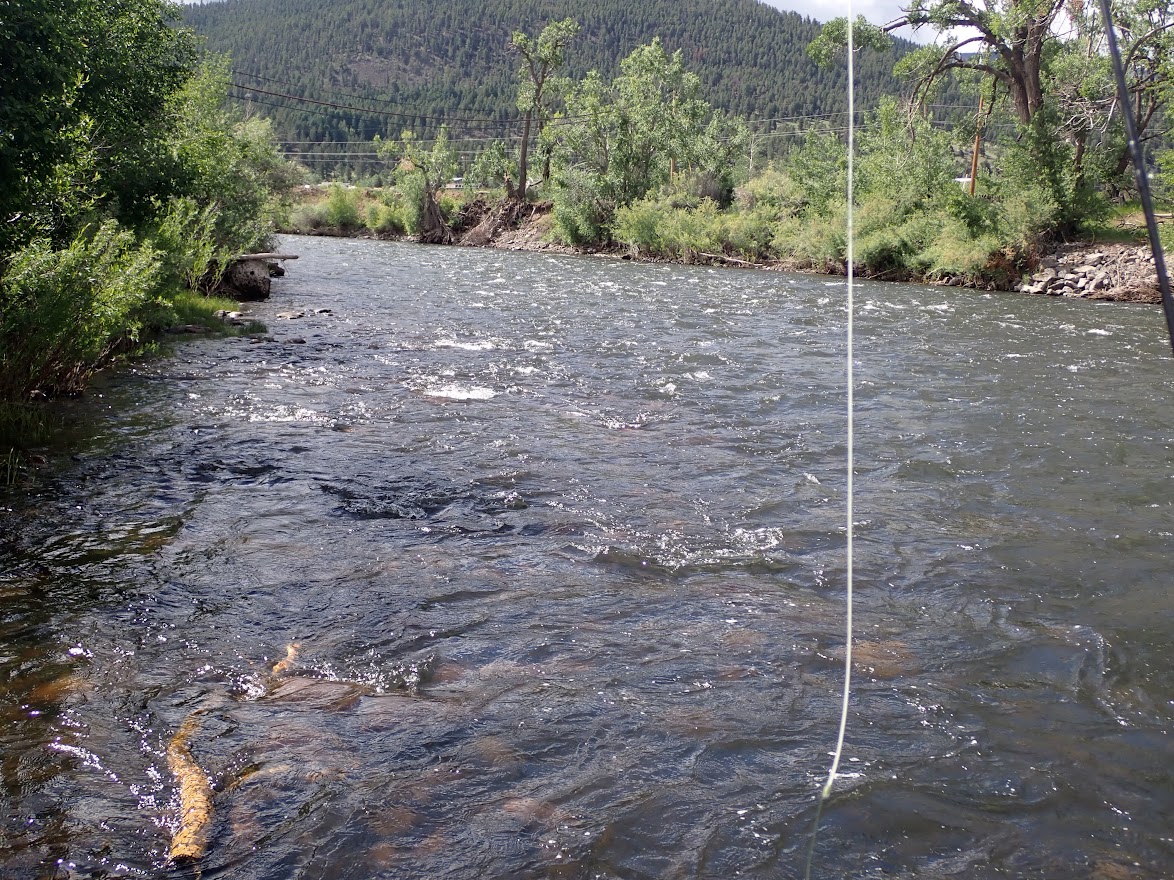 I was plagued by poor casting technique for much of the morning, as I was over zealous and failed to allow the double dry flies to extend enough on the backcast. This resulted in a significant number of snarls, where the leader on the trailing fly wrapped around the forward fly. The tangles were not severe, but I spent a significant amount of time unwinding the twisted leader, and this subtracted from the time my fly was on the water, when I held the advantageous forward position in the raft. In spite of this angler error, I landed fourteen trout by the time of our 1:00PM changeover. Similar to Tuesday most of the landed fish were vividly colored wild brown trout in the fifteen inch range. They battled valiantly, and Brandon warned me not to count them before they were secure in my net. 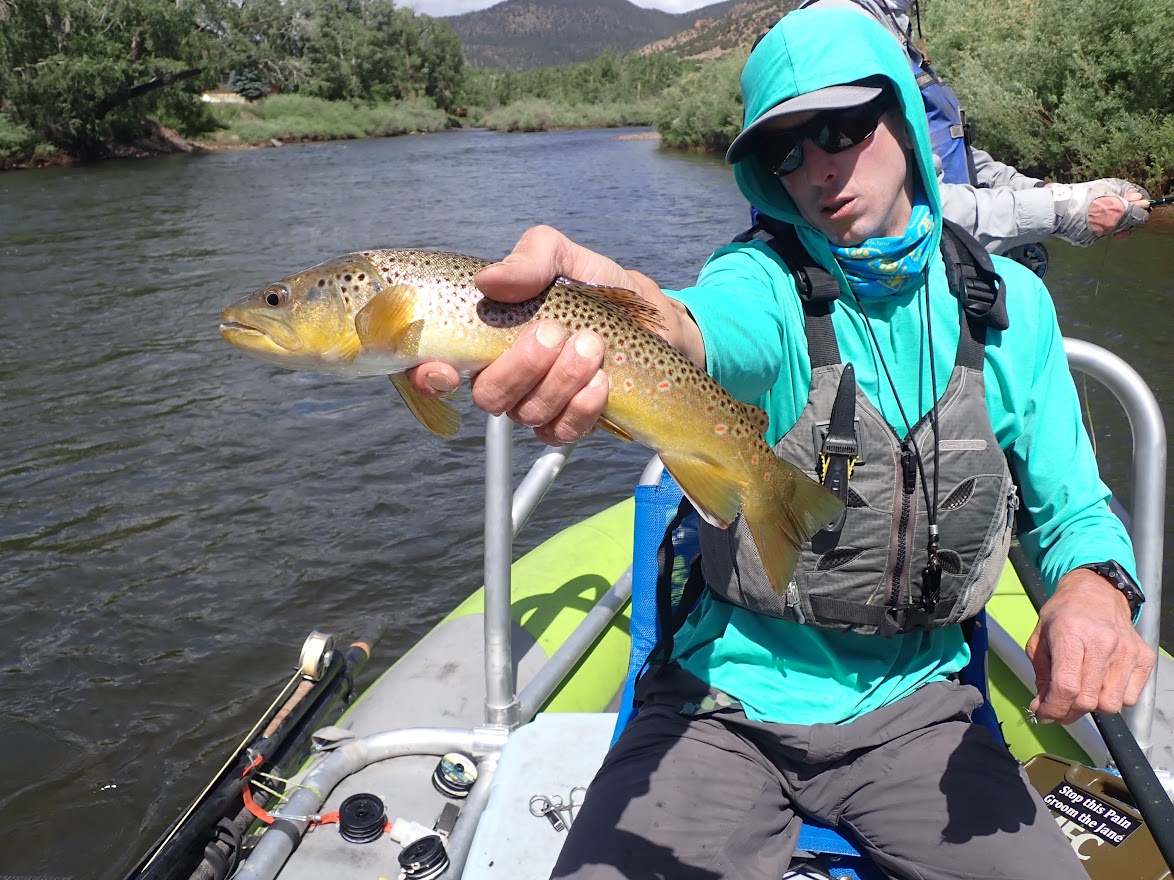 Because Wednesday was our last day, we planned an earlier end point in order to jump start our four plus hour return drive to Eagle, CO, and this explained the earlier than normal lunch time. At around 11:00AM a dense hatch of gray drakes commenced. This aquatic insect event caught the attention of the Rio Grande trout population. Brandon purchased a batch of gray drake cripples the previous evening based on the recommendation of some local guides, and these flies were close approximations of the naturals, because the trout crushed them. In fact, we agreed to eat only half of our lunches to take advantage of the long lasting emergence. 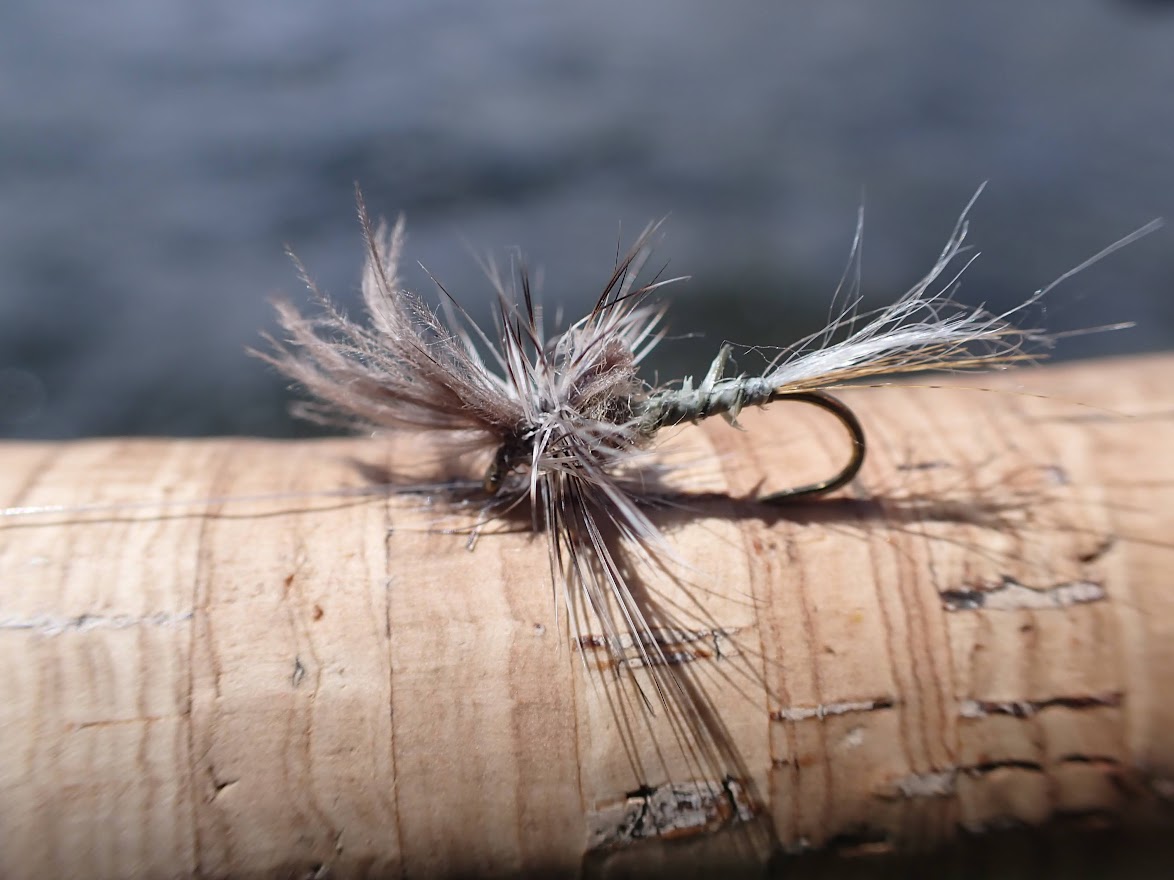 Rising trout remained a sporadic occurrence in the afternoon, but our prospecting attracted interest on a regular basis. As we drifted past the heads of riffles, we encountered clouds of mating gray drakes, and they bounced off our faces and glasses. I mention this only to emphasize the abundance of gray drakes on the South Fork section.

After lunch the drake population waned a bit, but eager eaters remained, and we continued to pick off trout with regularity. I increased the fish count from fourteen to twenty-four from my rear position in the raft, and I concentrated on better casting form. This resulted in my flies spending more time on the water and less time in monofilament snarls. We fished double dries all day, and the gray drake cripple was far and away the top performer. During the afternoon time frame, Brandon switched us to purple hazes, and the size 12 parachute versions contributed additional netted fish. 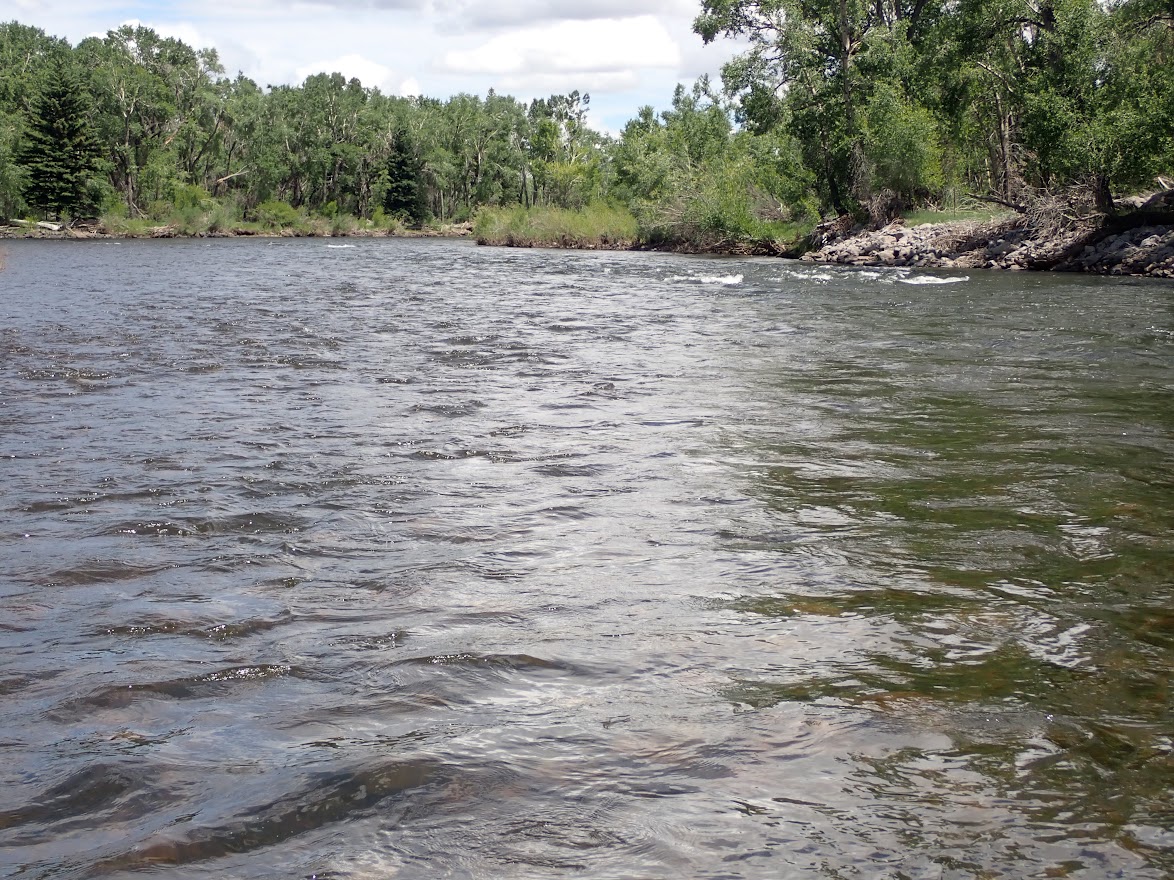 Wednesday was another excellent day on the Rio Grande. Steady action kept me focused, and most of the trout were hard fighting brown trout in the fifteen inch or greater range. Compared to the first two days, we caught more fish from bubble lines five feet or greater from the bank or wide riffle sections over cobble bottoms with a depth of two feet. The drop in flows and wider river bed clearly allowed the resident trout space to spread out and feed on the abundant quantity of mayflies, caddis and stoneflies. 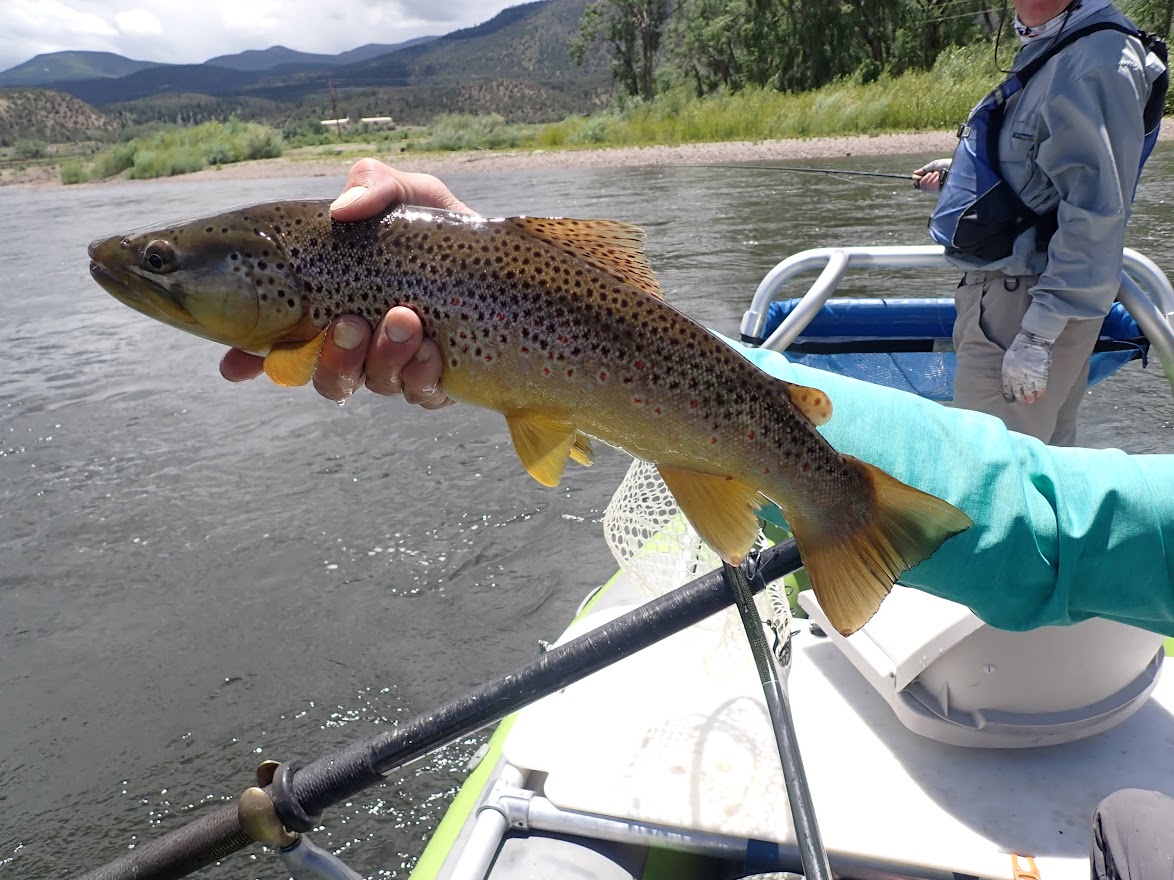 My most vivid memory of the day and trip was created by a twenty inch bruiser that put a substantial sag in Brandon’s large net. We were casting to nice pockets tight to the left bank, and I was popping short casts into a stairstep series of pockets for short, quick drifts. On the sixth such flick, the cripple floated ahead of the point fly and crept in front of a large exposed boulder. Suddenly a large head and then body emerged from the shadow of the large rock, and the cripple disappeared. It was a very visual take and the highlight of my day. Needless to say, I was quite impressed with the Rio Grande River during our three day stay at the end of June 2021. 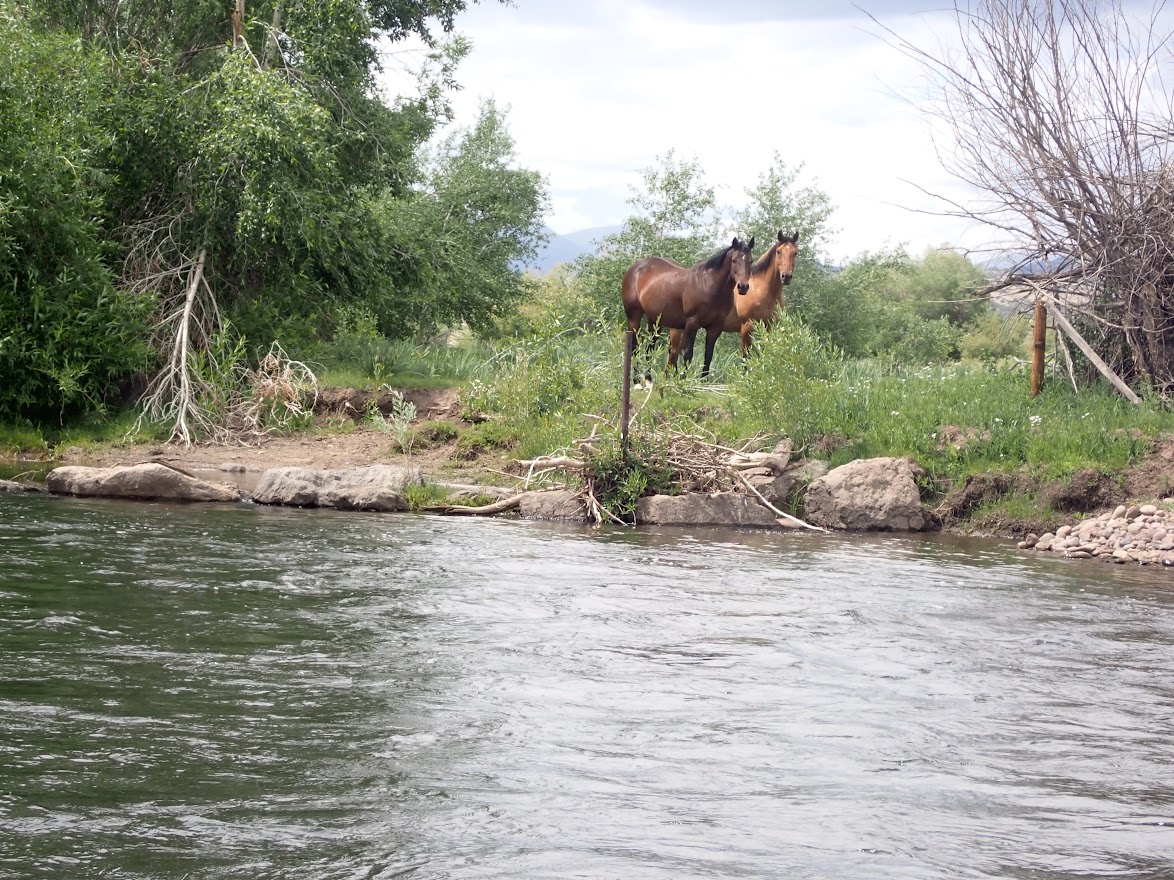 Friends Checking Us Out

The weather on Tuesday was similar to Monday with highs in the low sixties. I wore my waders for the second day in a row, and I was comfortable all day. Between 1:00PM and 2:00PM some storm clouds gathered, and I wore an extra layer for thirty minutes, until the sun reappeared. For most of the day I wore a fleece and raincoat. 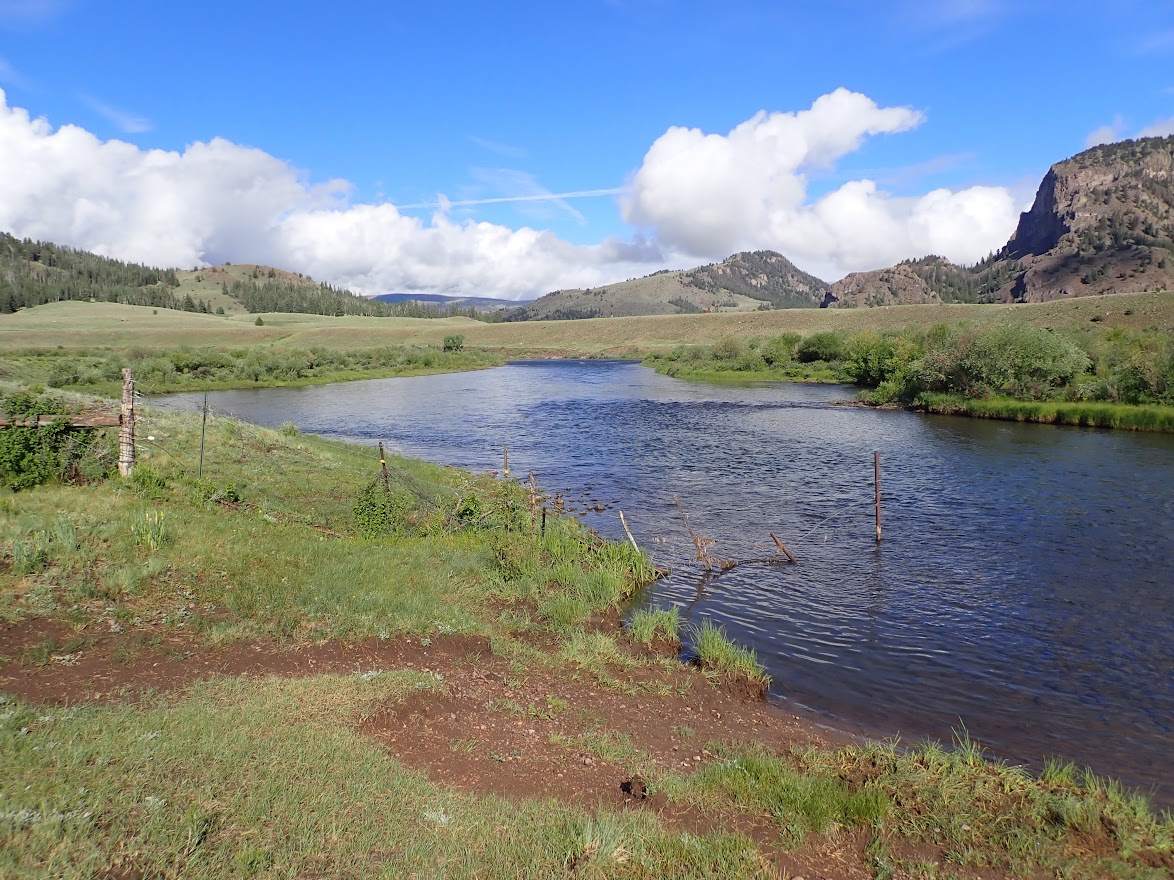 This Is a Boat Launch? 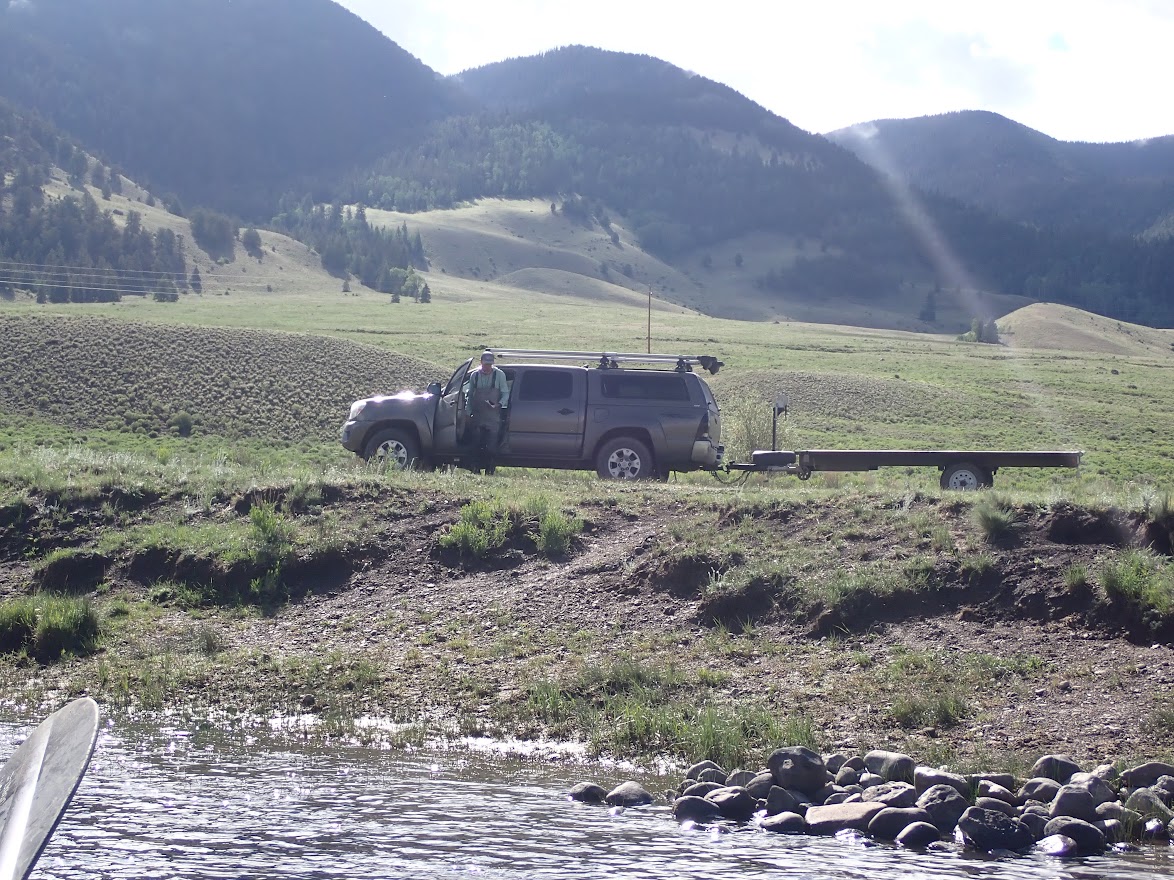 Could Be an Ad for a Toyota Truck

Once again our guide was Brandon from Cutthroat Anglers. The river was in fine condition, and we launched the inflatable raft at Sneaky Boat Launch, a crude rutted area that was barely more than a slanted meadow bank. This put in was upriver from Creede, CO, and consequently the river carried less volume.

Tuesday evolved into a day just as productive as Monday. My fish count was twenty-six, but the size of Tuesday’s catch was on average larger than Monday. Other than four brown trout barely above the counting threshold, the remainder of the netted fish were easily within the fourteen to eighteen inch range. I landed four hard charging rainbows, and the remainder were robust brown trout. These fish were dogged fighters, and they put a significant strain on my arm. 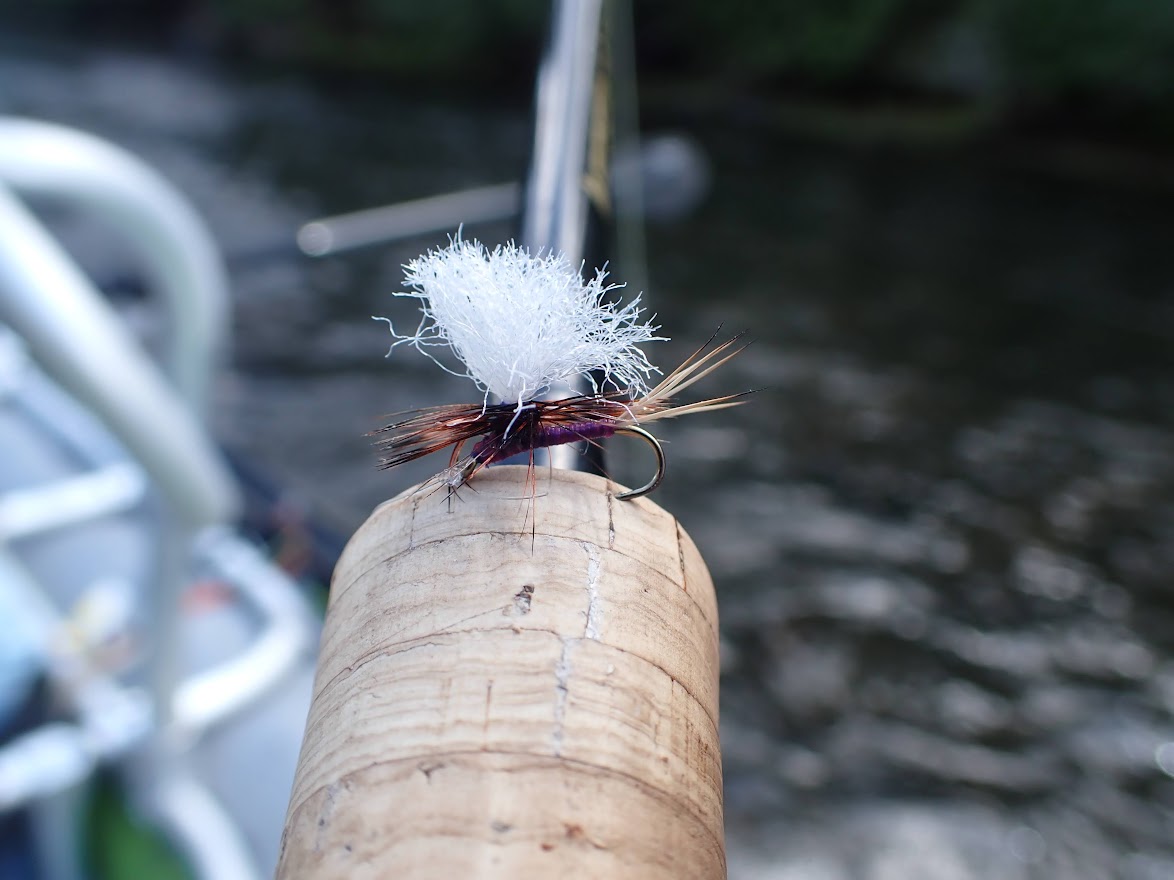 Zoomed in on the Purple Body 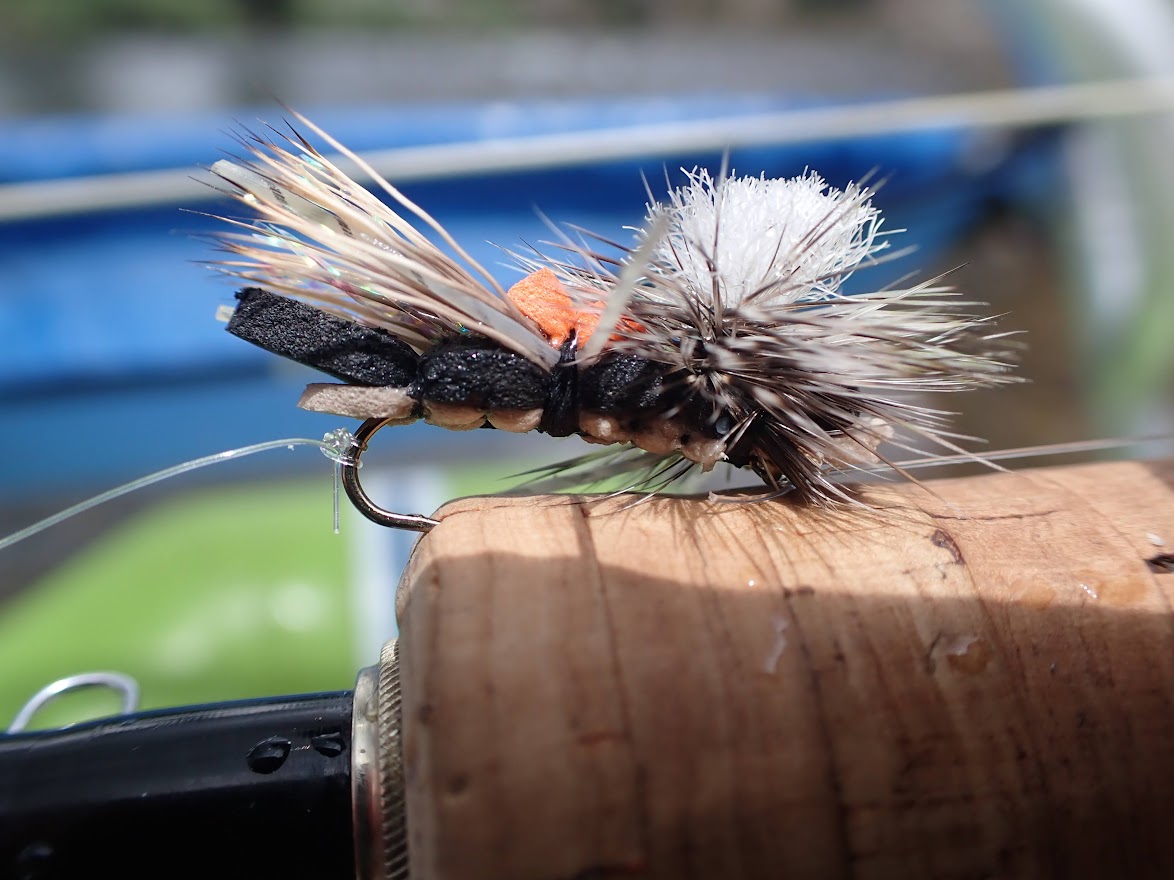 Dave G. and I registered at least three doubles, when we were both hooked up at the same time. The upper section was somewhat smaller than the day one stretch, and this created a more intimate feel. I manned the stern position in the morning and switched to the bow at 1:30PM. Sixteen of my landed fish were recorded in the morning, and ten reached my net in the afternoon. Arm and body fatigue played a significant role in my afternoon fishing experience. 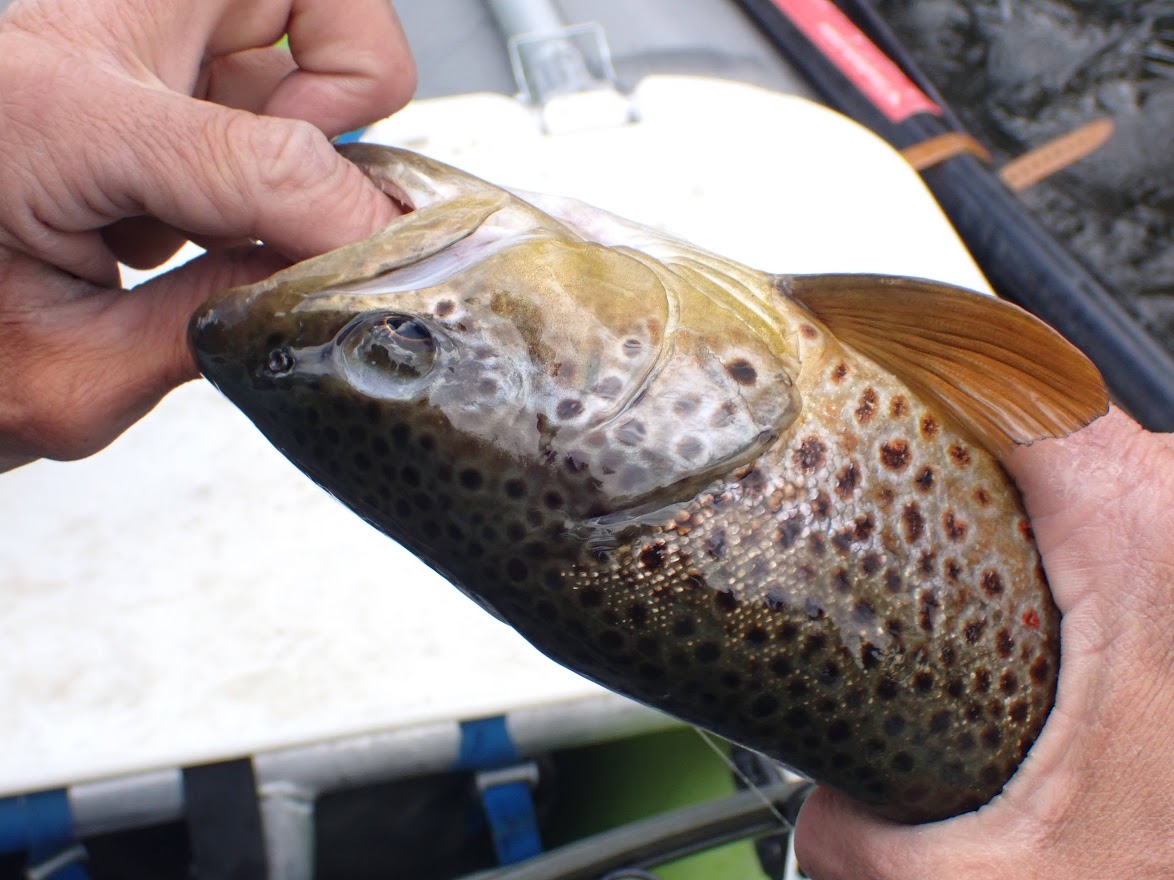 During the afternoon I connected with three very strong fish that streaked for logs and branches, and my efforts to prevent them from reaching their destination resulted in break offs. A thirty fish day was easily attainable with better luck and skill. Dave G. and I spent the entire day tossing dry flies. The most productive of these flies were a size 14 purple haze and a fuzzy wuzzy foam surface fly. The fuzzy wuzzy imitated both a grasshopper and stonefly. Twice during our drift I witnessed a lumbering egg laying stonefly, as it crash landed on the water. The egg laying proved short lived, as ravenous trout crushed the large morsels of meat in confident swirls. 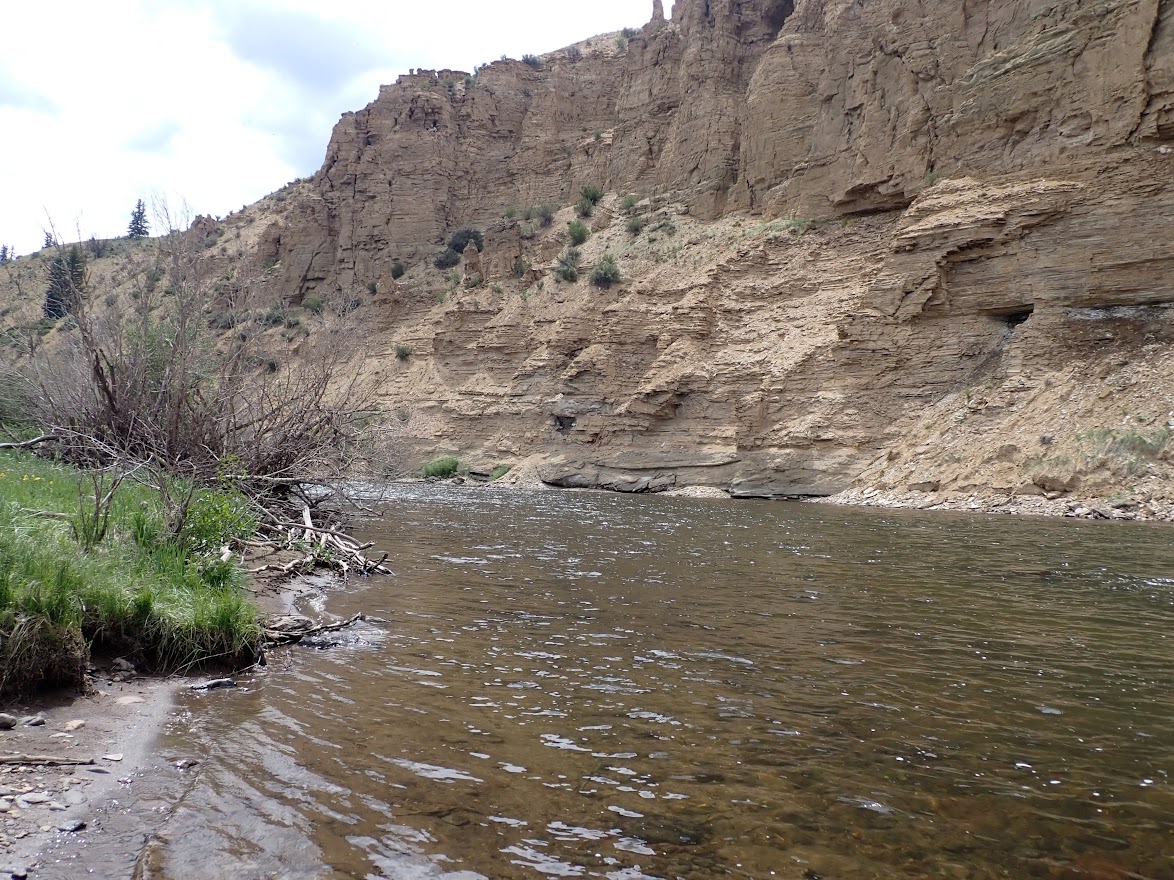 Before lunch quite a few PMD’s, caddis, and drakes made an appearance, and I observed the most rises of my cumulative time on the Rio Grande. I spotted four or five green drakes, and I was tempted to try one of my parachute style flies, but I stuck with Brandon’s expert recommendations. 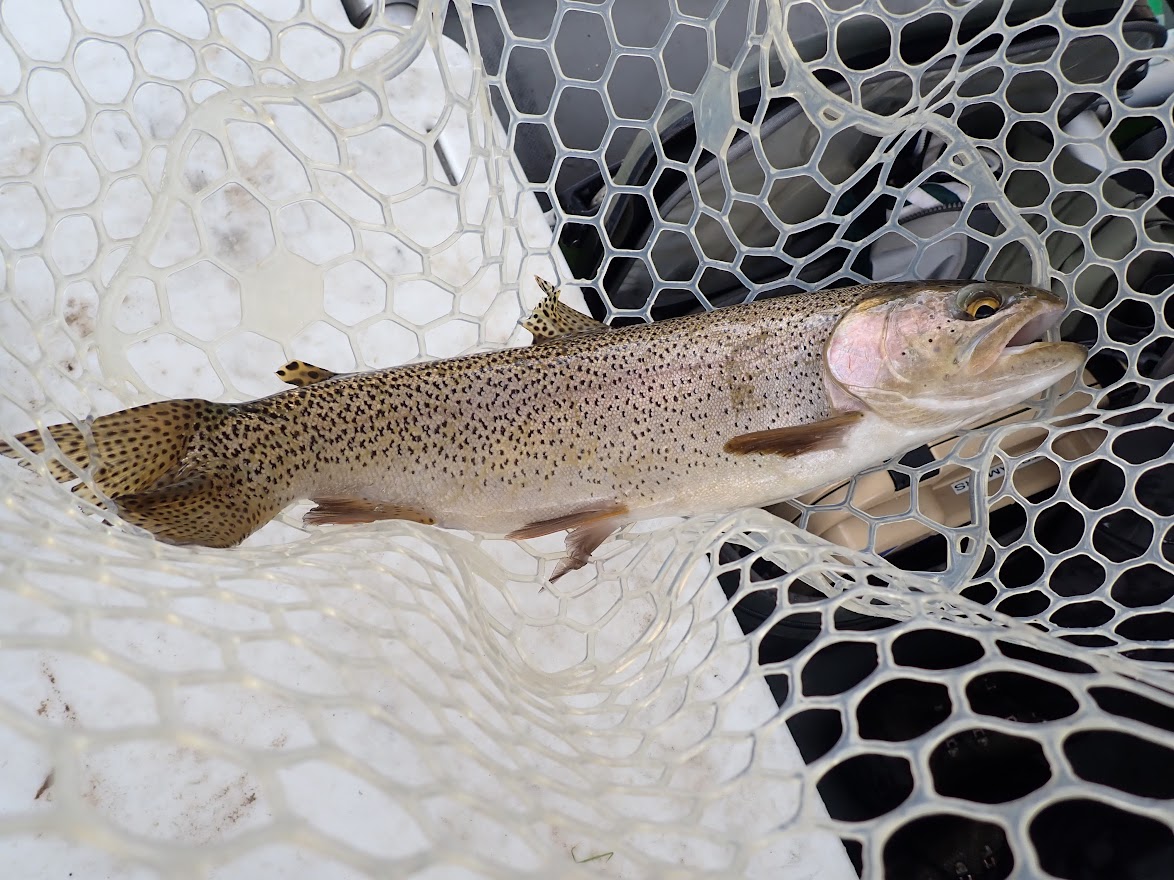 My friend, Dave Gaboury, and I scheduled three days of guided float fishing with Cutthroat Anglers on the Rio Grande River in the Creede, CO area, and on Sunday, June 27 we completed the five hour drive from Denver. We arrived at The Grove in Creede on Sunday at around 6:00PM. MIchelle of Cutthroat Anglers was our chef for the three days, and she prepared our breakfasts and dinners at the modern cabin in addition to making box lunches for our daily float trips. 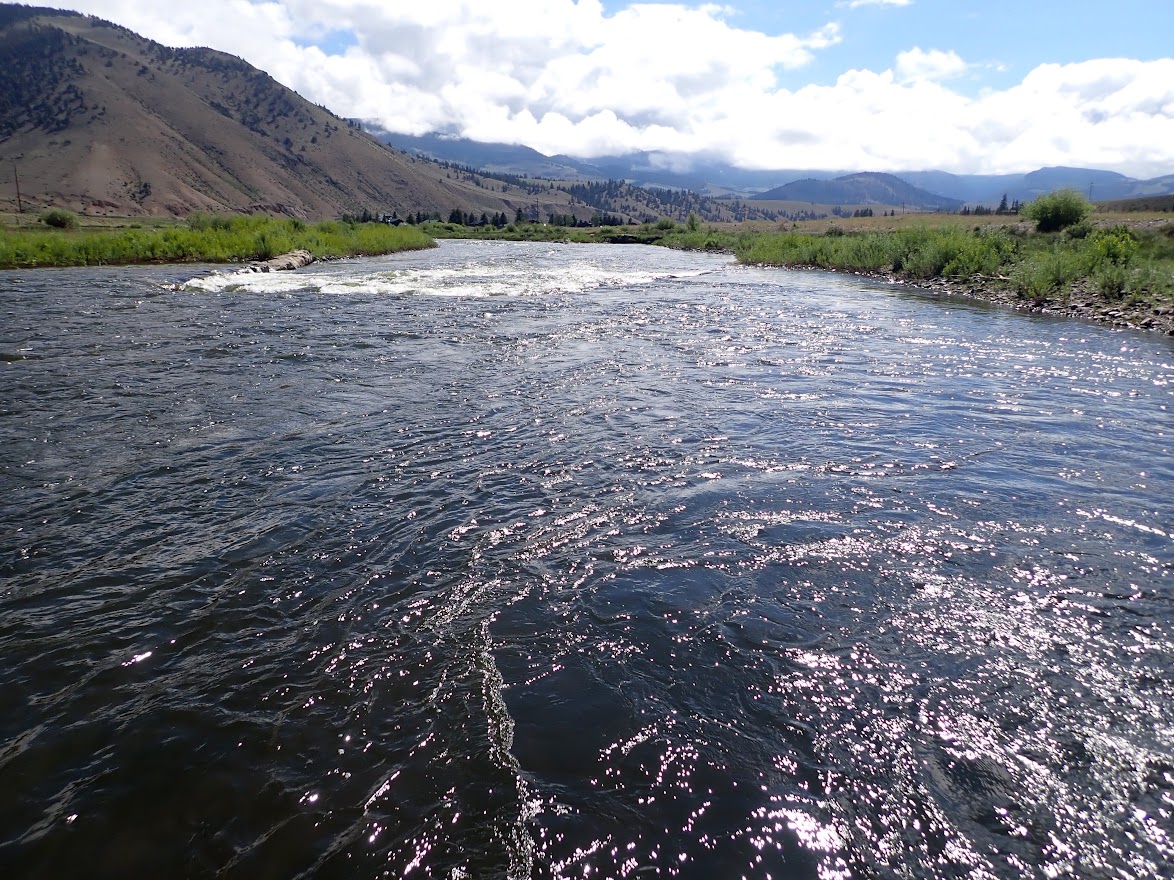 We met our guide, Brandon, at 8:00AM on Monday morning, and we were on the river by 9:30AM. Monday was a cool day with a high in the low sixties after a decent amount of rain on Sunday night. I wore my waders and wading boots in case of afternoon thunderstorms, but they never materialized. Nevertheless, I was only a bit warm for a short window in the afternoon. The flows on the Rio Grande at Wagon Wheel Gap were 900 CFS, and the river was very clear. Conditions seemed perfect to this newbie to the Rio Grande River. 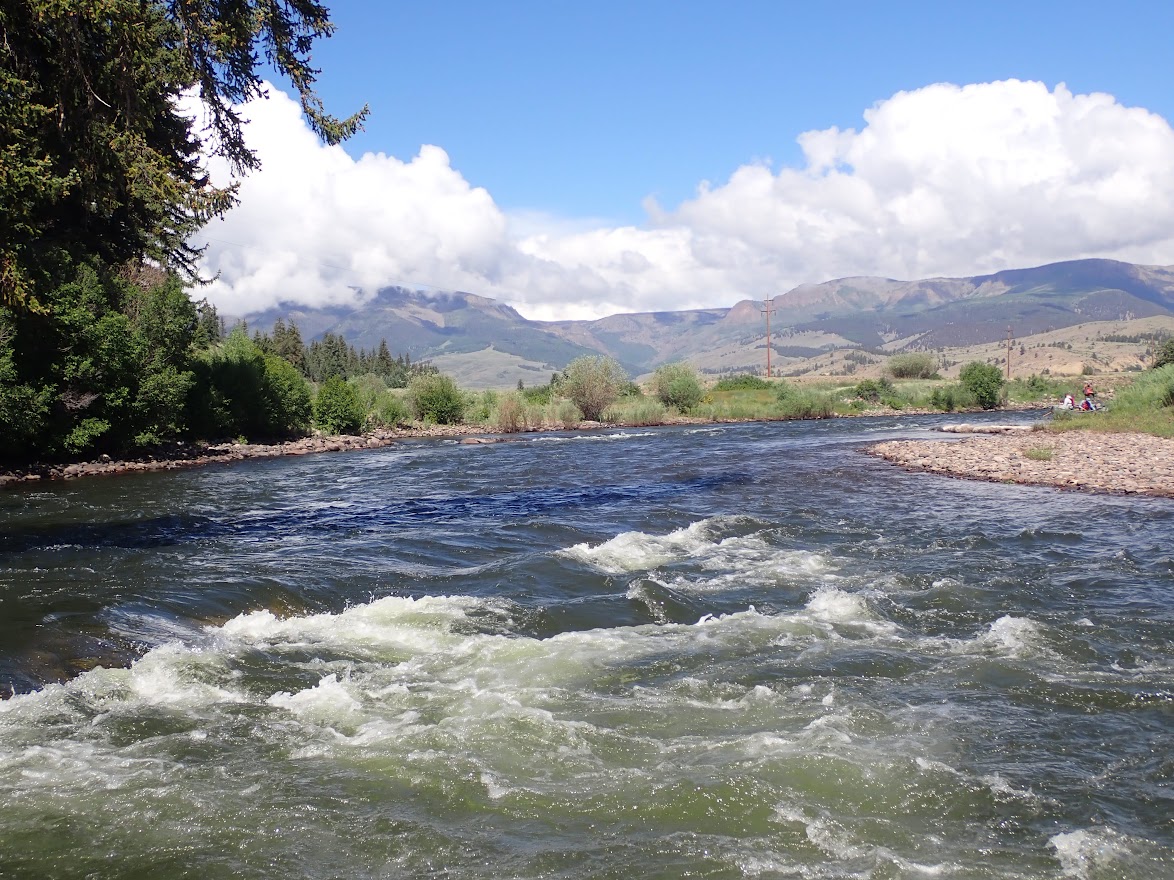 We began our morning with double dry flies, but this approach yielded no success, so we switched to dry/dropper rigs that featured a chubby Chernobyl and pheasant tail nymph on a jig hook. The move to dry/dropper paid dividends, and we began scoring fish with some regularity on the pheasant tail. By 11:00AM some pale morning duns appeared, and Brandon switched us back to double dries with a pale morning dun comparadun paired with a chubby Chernobyl. My fish count surged to twenty-one by the time we paused for lunch at 1:30PM at Wagon Wheel Gap. 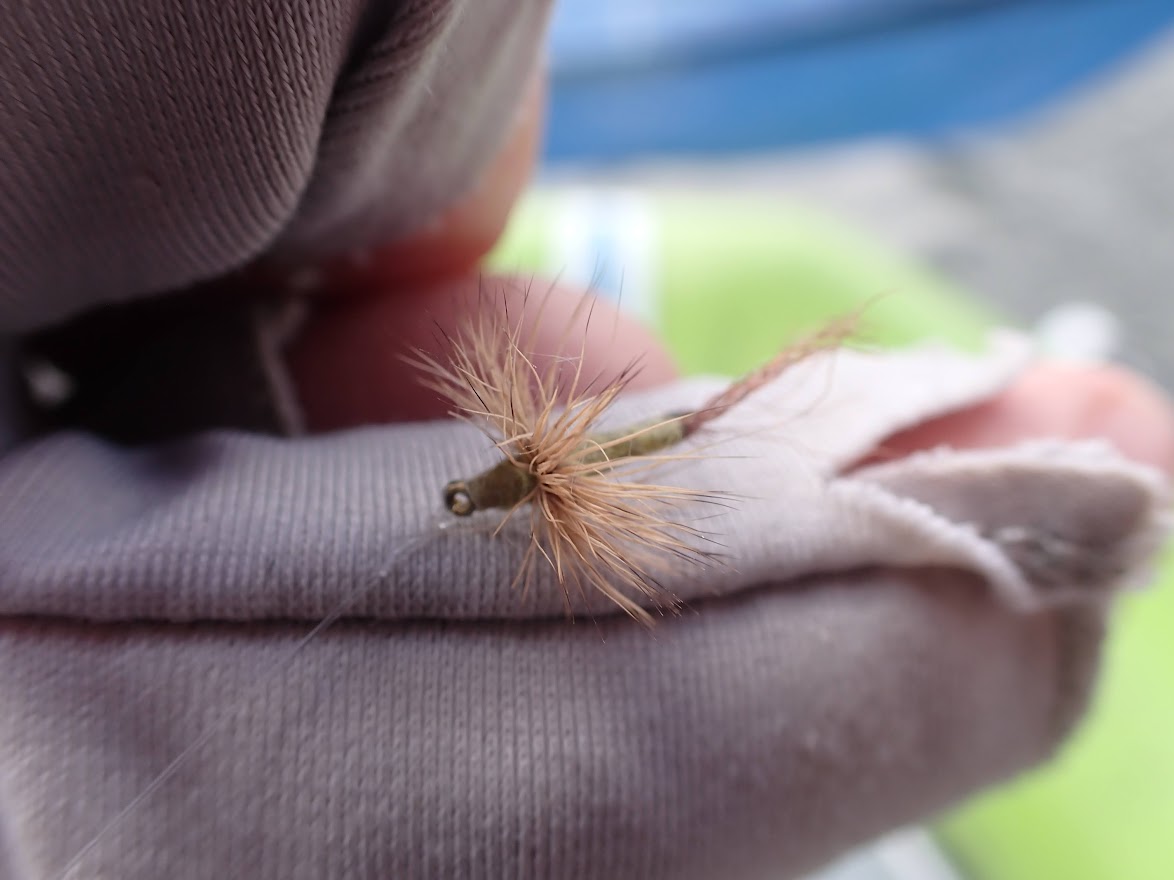 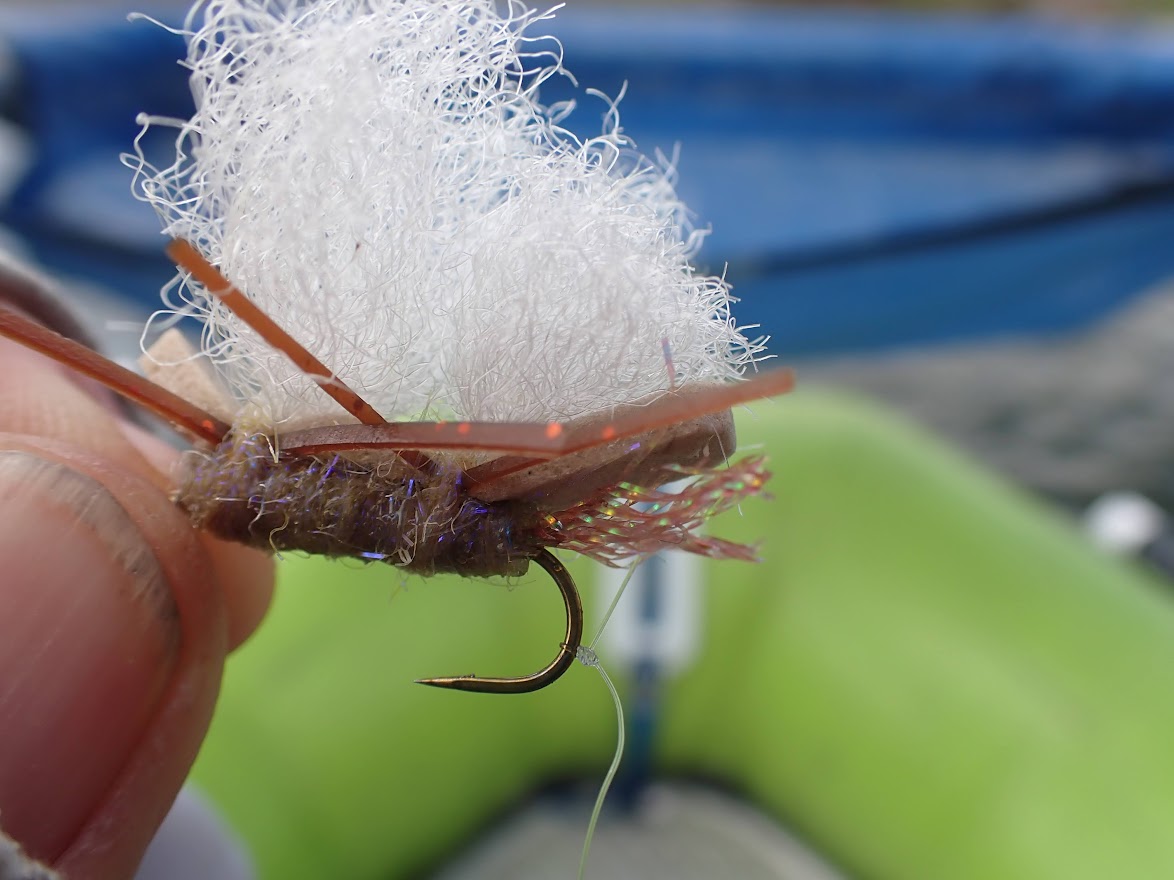 Chubby Chernobyl on the Point

After lunch Dave G. and I switched positions in the boat, and we continued presenting double dries. During this afternoon time frame the most productive fly was a size 12 parachute adams. The water type that delivered the most fish was tight to the bank with moderate depth and velocity. Casting to bank side pockets next to large rocky structure was particularly advantageous. All the trout landed were browns except for two rainbows. The standard size of the fish was 13 – 14 inches, but I also landed a decent number of trout in the fifteen to eighteen inch range, and Dave G boated an eighteen inch beauty. 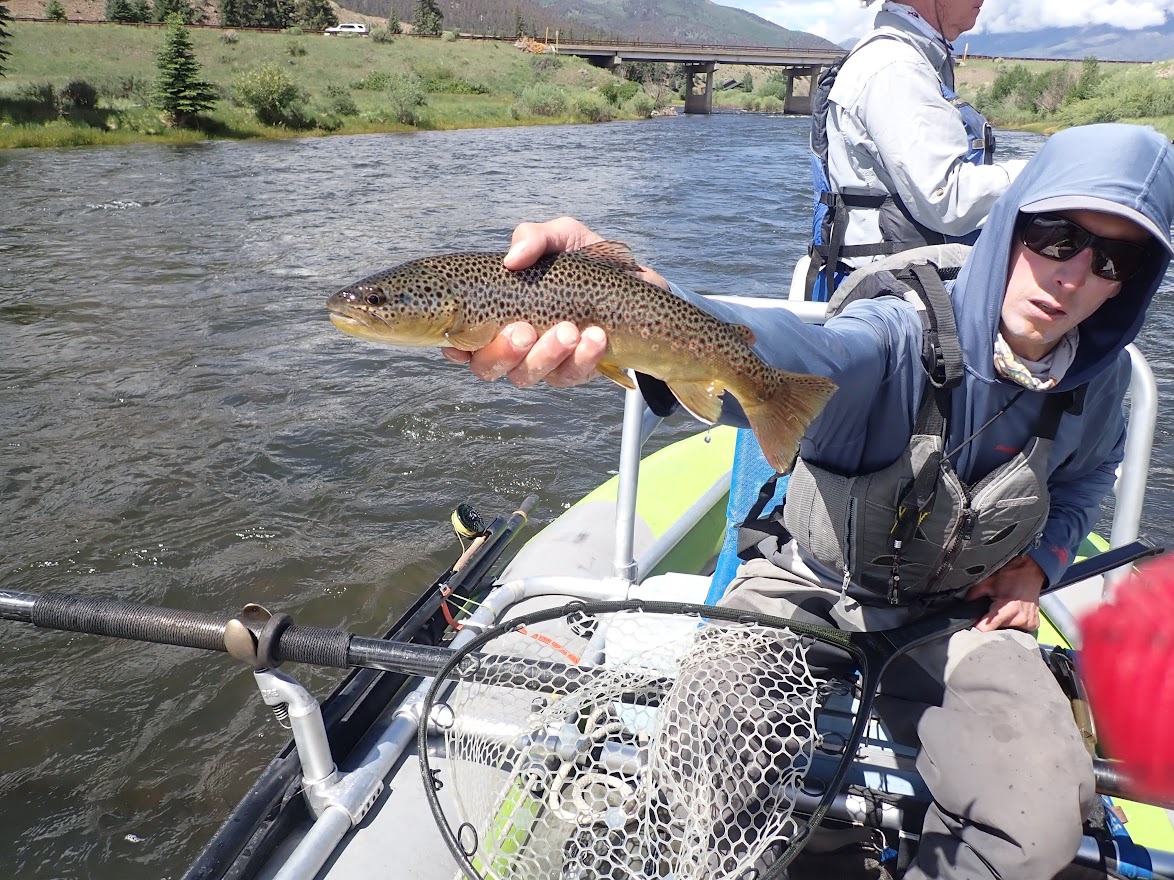 Showing Off a Fine Brown Trout 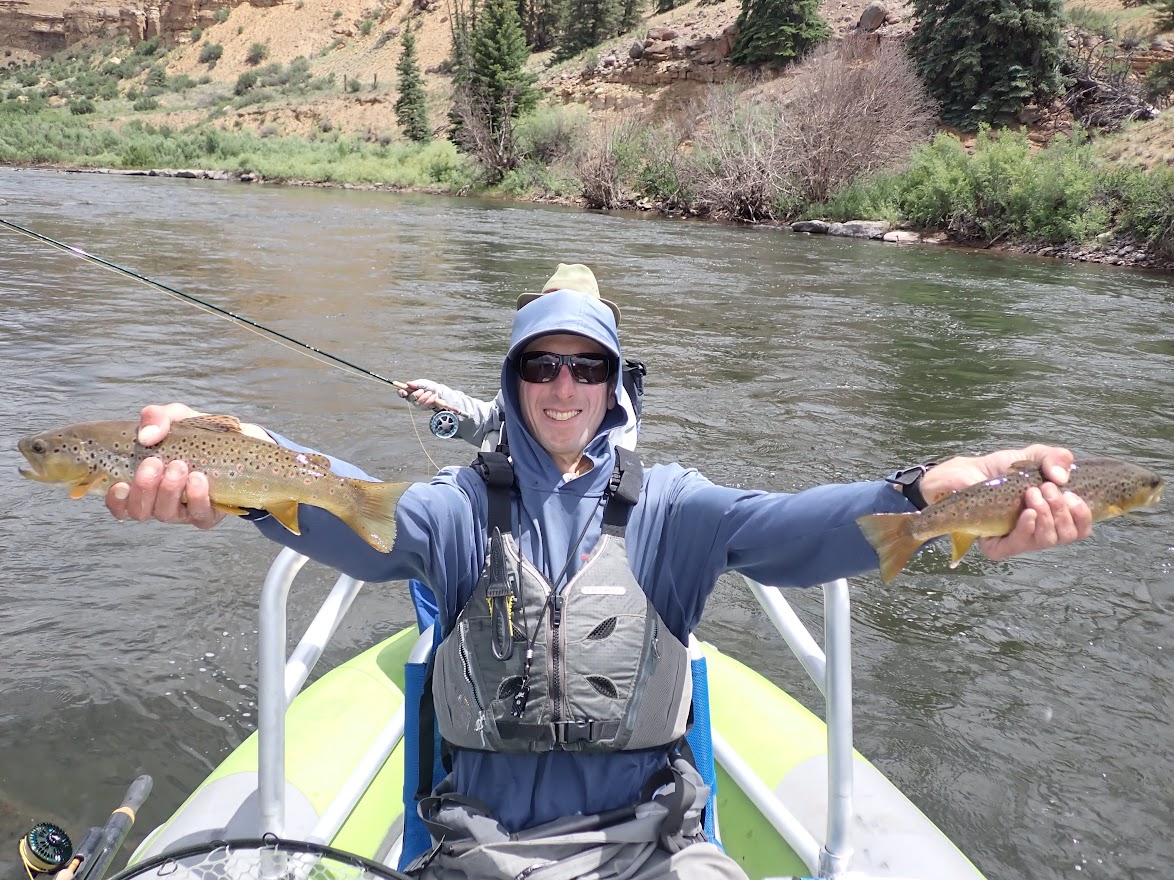 Monday was a blast, and a thirty-three fish day was certainly a healthy introduction to floating the Rio Grande River. As I curled under the blanket listening to the rain outside our modern cabin on Monday evening, I was filled with anticipation for what Tuesday might bring. 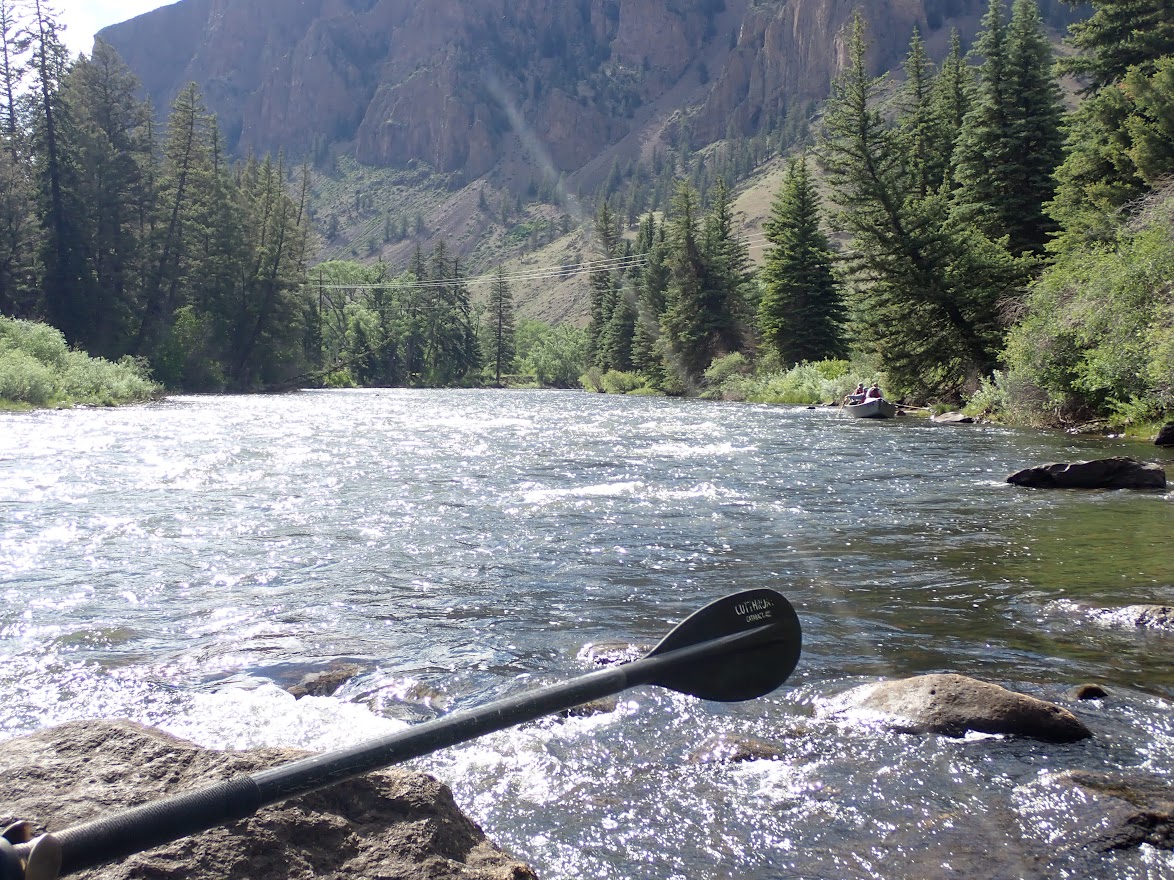 Entering More of a Canyon