Location: Bogan Flats Campground upstream to the group camping area and then from the downstream border of the campground back upstream for 50 yards.

Our daughter, Amy, was visiting for ten days during her summer break from the physical therapy program at Pacific University in Hillsboro, OR. Jane and I considered several options for a camping trip during her stay and finally settled on the Crystal River valley. Jane and Amy had never visited this area, and we were intrigued by the towns of Marble and Redstone, and there were numerous interesting hikes and bike rides nearby. In addition the Crystal River was the common thread, and I experienced one reasonably successful day fishing in Marble and upstream from the Bogan Flats Campground several years ago.

Jane and I attempted to make reservations using the USFS web page, but we quickly discovered that all the sites that allowed reservations were locked up for Friday night, July 17. However, it appeared that there were numerous first come/first serve campsites at Bogan Flats. Based on this assessment, we decided to make the trip on Wednesday and secure a walk up site for three nights.

On Wednesday morning we filled the Santa Fe from floor to roof with camping gear and departed for the Crystal Valley. The addition of a third camper challenged our ability to squeeze everything into the back of the car, but we managed to do it with no significant omissions. After a four hour drive with a stop for lunch in Glenwood Springs, we arrived at Bogan Flats by 3:30PM and made a quick circle of the campground. Very quickly we discovered that all the sites were contained in the reservation system, and this meant all were reserved for Friday night. We were now faced with the decision of whether to drive to another campsite, or change our plans to stay at Bogan Flats for two nights rather than three. We chose the latter as we concluded that we could pack everything up in a manner that enabled biking and fishing on Friday and then return to Denver.

Before leaving Denver I did a quick check of the stream flows on the Crystal River, and I was quite unnerved to see a huge spike in flows Wednesday night. Prior to the peak, the river flows subsided to 430 cfs, but on Wednesday night the graph depicted a dramatic blip to 700 cfs. Causing me more concern was our stop at the USFS White River ranger station in Carbondale where the man on duty confirmed that the area received heavy rain, and he also informed us that the Crystal muddies quickly as it passes through soft red soil on its way to the Roaring Fork River.

Fortunately as we drove on Colorado 133 for 25 miles along the Crystal River on our way to Bogan Flats, I noticed that the river was nearly crystal clear albeit with relatively high flows, although a level that appeared to allow edge fishing. 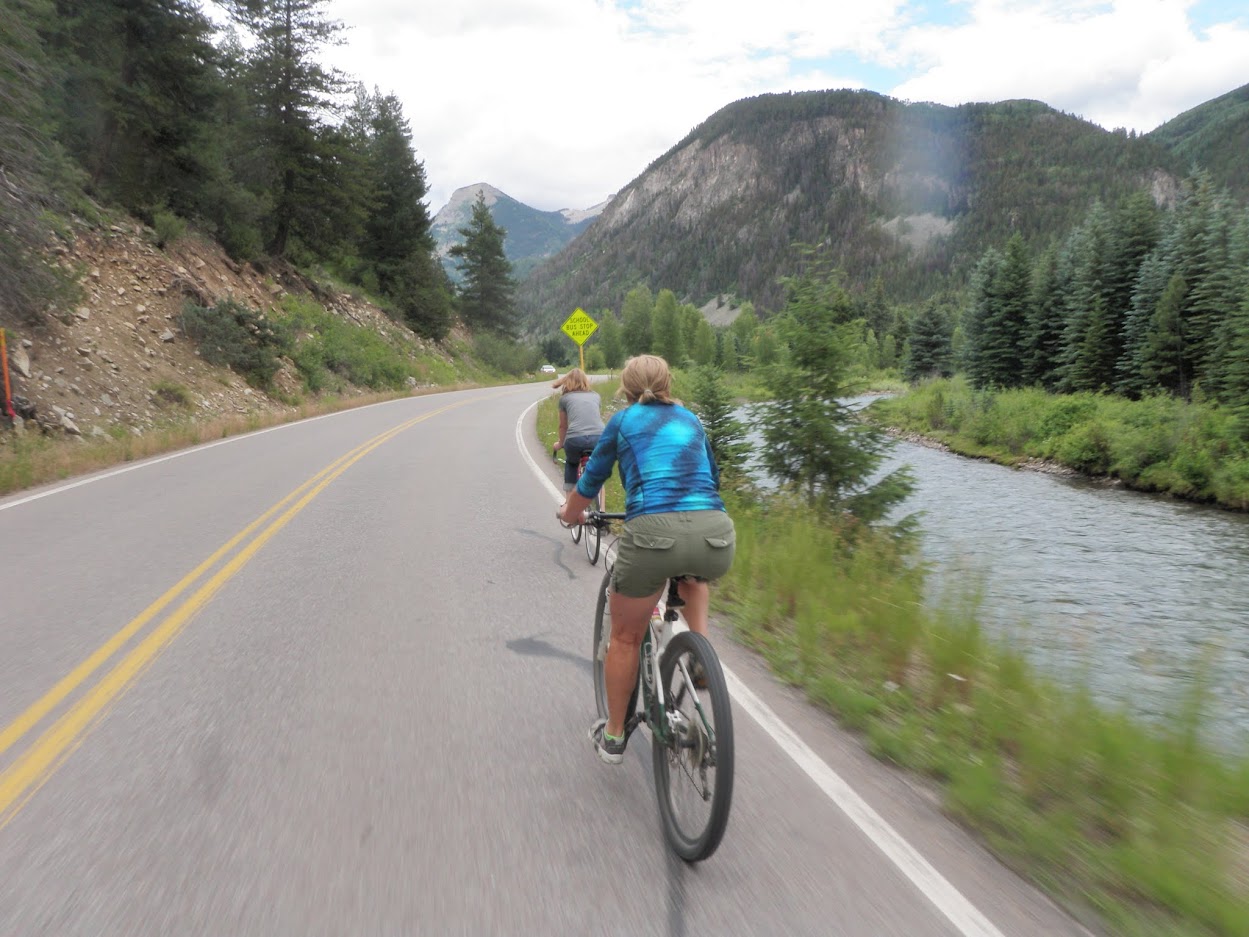 On the Road to Marble

After we settled on campsite number four and paid our fee for two nights, we assembled the tent and canopy; and with some time to kill before dinner, we chose to take a brief bike ride. I suggested that we ride toward Marble a bit, as I selfishly wished to check out the river access, but once we got started, we fell into a rhythm and continued into the town. The ride lasted for an hour, and we endured several significant hills but enjoyed seeing numerous marble remnants and sculpture along the way. The town of Marble was rather small with a firehouse and many small vacation homes. 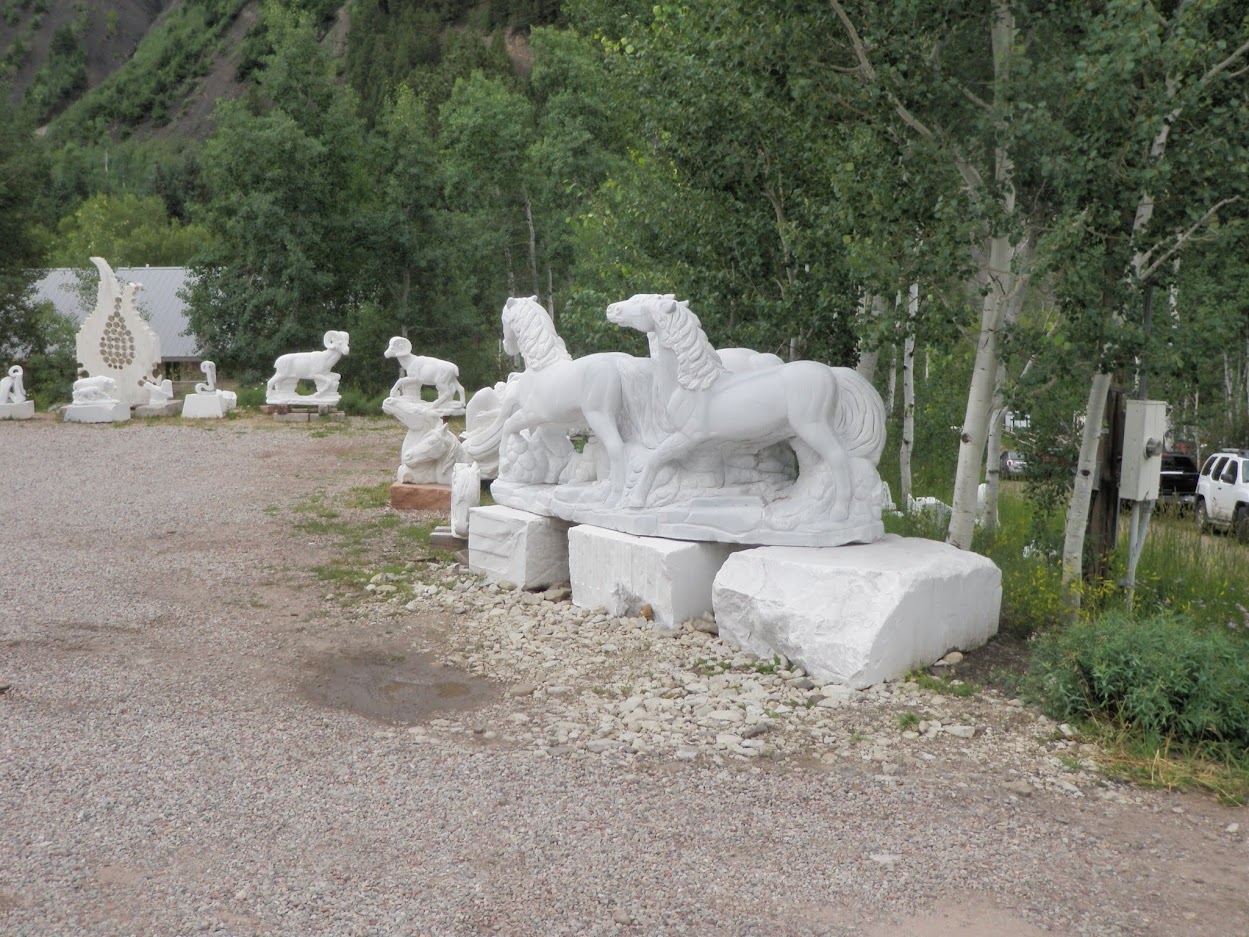 On Thursday I suggested that we undertake a bike ride on the Rio Grande Trail in the morning, and then in the afternoon I planned to fish from the campground while the girls could use the car to travel to a trailhead where they could either bike or hike. Amy and Jane chose a segment of the Rio Grande Trail that went from Woody Creek to the terminus in Aspen at Neale Street. We executed the plan with the only stumble being our inability to find the Woody Creek parking lot. Instead we found Jaffe Park, and while this served our purpose, it also necessitated a steep .5 climb to the trail at the outset of the twenty mile ride. Much of the course followed the upper Roaring Fork River, and the clear although somewhat high flows beckoned me to abandon the Crystal River to fish this larger river with reputedly bigger fish. The Rio Grande Trail skirted Aspen, and it was rarely obvious that we were traveling through a resort town with extensive million dollar residences within a stone’s throw of our path. 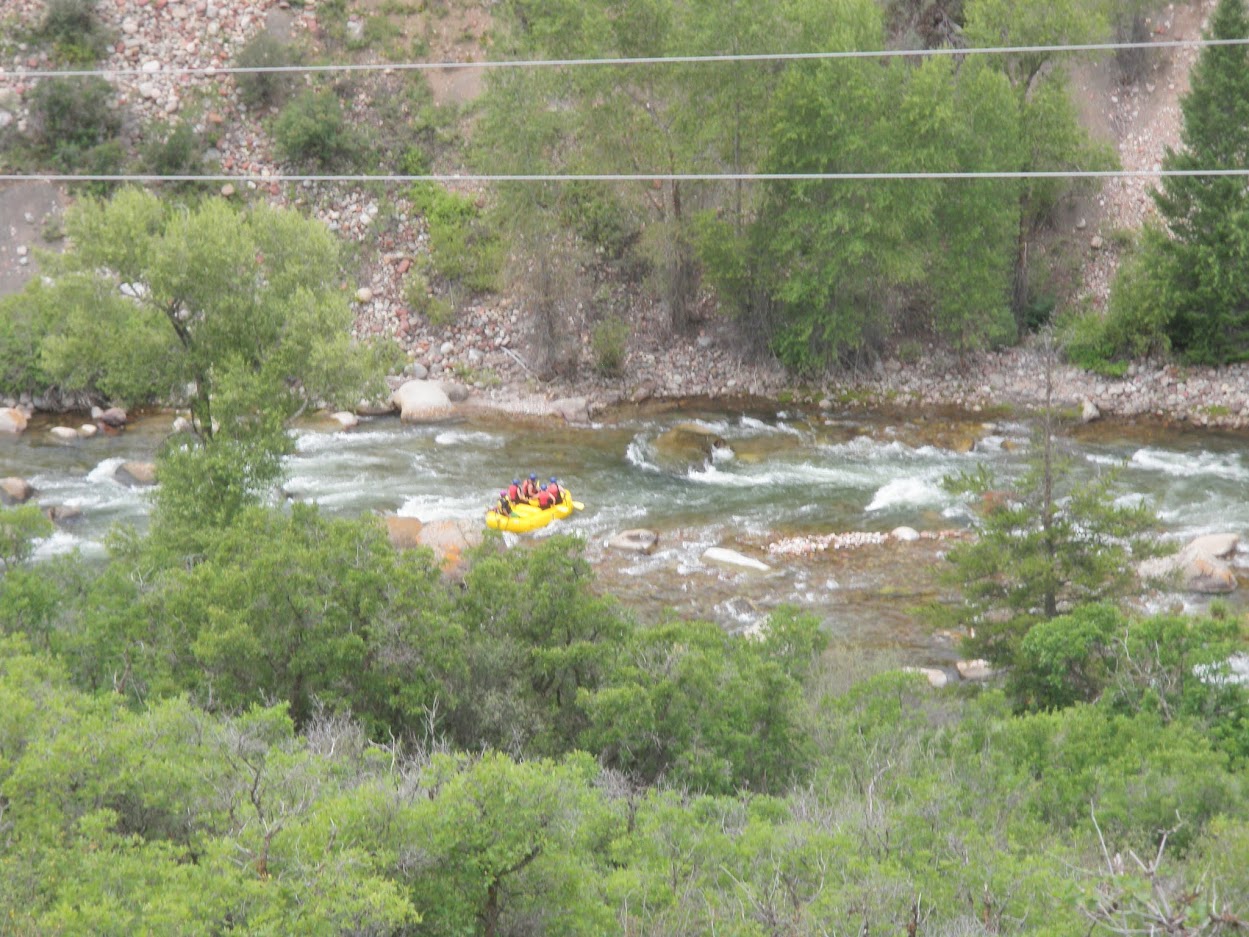 Upon our return to Bogan Flats, I quickly prepared and devoured my lunch and then set out on my Crystal River fishing adventure. It was almost 4PM by the time I donned my waders and assembled my Sage four weight rod. The sky was mostly sunny with occasional clouds providing a white blemish on the background of blue. I found a worn path that cut away from the entrance to the campground and quickly hiked toward the river. The location where the Crystal River flowed past our campsite featured a high steep bank, so I was looking for a place along the trail where I could descend to the river without undue risk. 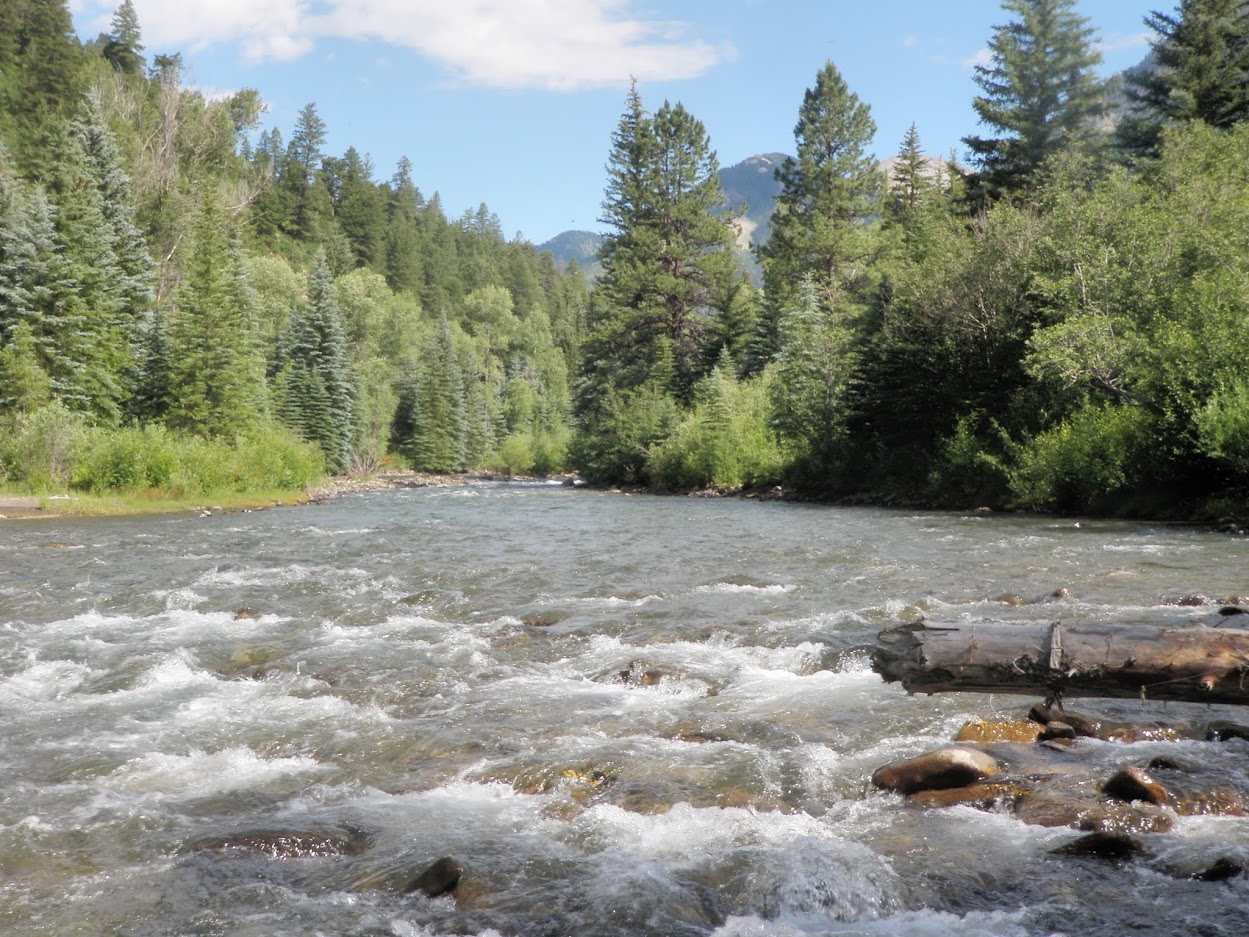 It was not long before I found my opportunity, and I bushwhacked my way through the forest until I found myself along the edge of the river. As I stood next to the river, I confirmed that it was high and clear. Next I prepared to fish, and I spotted a yellow stonefly cruising up from the river, so I elected to begin with a yellow sally adult, but after a reasonable test in several promising pockets with no results, I decided that I needed something larger to attract attention with the higher flows. I adjusted my approach to dry/dropper and featured a Chernobyl ant connected via a 5X tippet to a beadhead hares ear nymph.

This combination at least prompted a few refusals to the Chernobyl ant, but I still could not land a Crystal River fish, so I swapped the Chernobyl for a yellow Letort hopper. Perhaps golden stoneflies were present along with their smaller yellow sally cousins. Again I could not entice any interest, so I exchanged the hares ear for a salvation nymph and continued prospecting likely holding spots. Finally the salvation nymph delivered a small rainbow trout, but I consumed roughly thirty minutes with intense casting and wading to achieve this result. 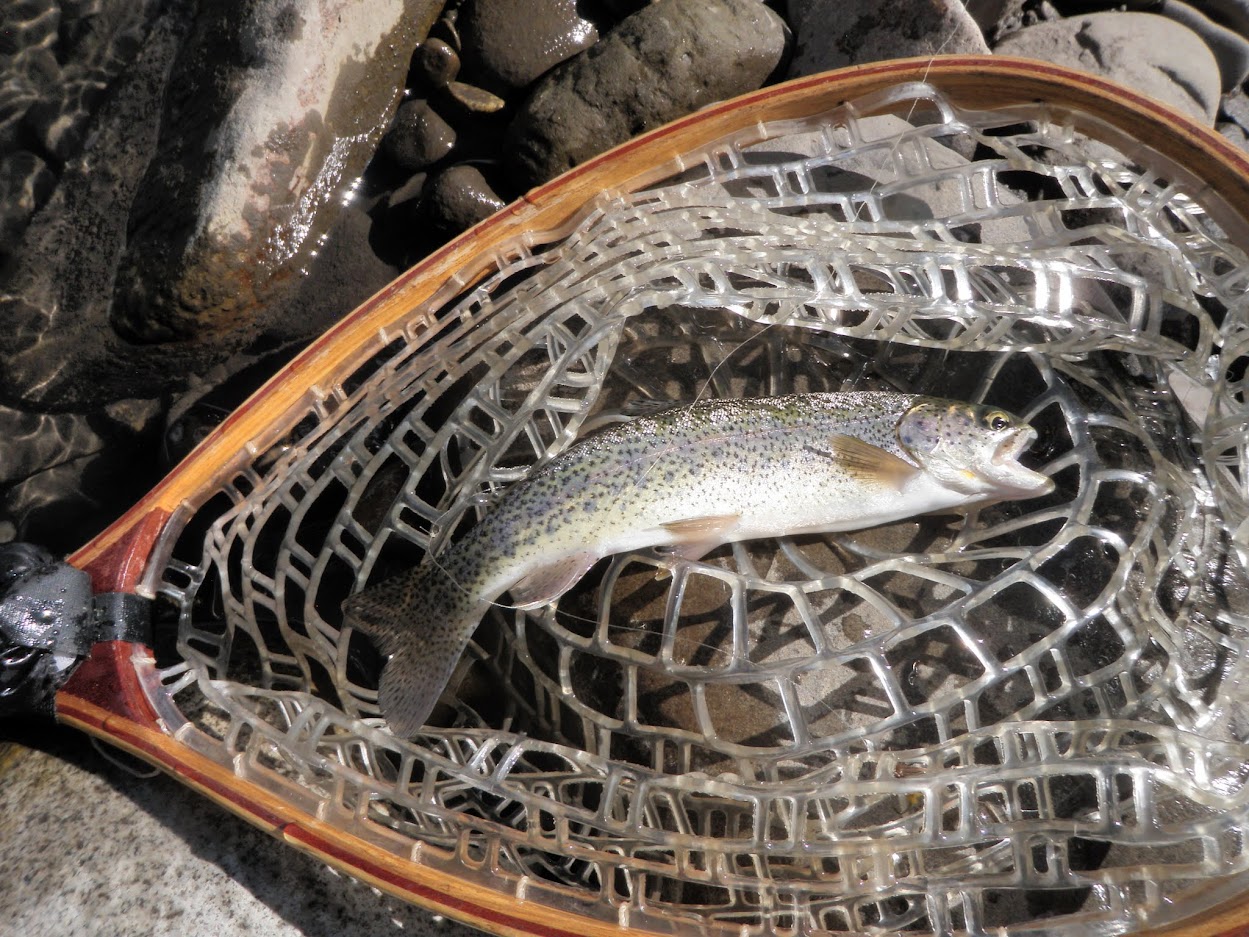 At this point I concluded that the dry/dropper approach was not conducive for the high cold late run off conditions present on the Crystal River, so I resigned myself to going deep with weight. I rigged my line with an indicator, split shot, iron sally nymph and salvation nymph and began dredging the bottom of the river. This actually paid dividends as I landed seven additional fish until I decided to move on at 6PM. The trout chose evenly between the iron sally and salvation nymph, and six of the netted fish were rainbow trout with one lone brook trout in the mix. The brook trout was actually quite nice by western standards and measured around nine inches. All the rainbows were quite small and fit in the 6-9 inch range. Unfortunately the best fish between four and six PM was a thirteen inch whitefish, which I did not count. 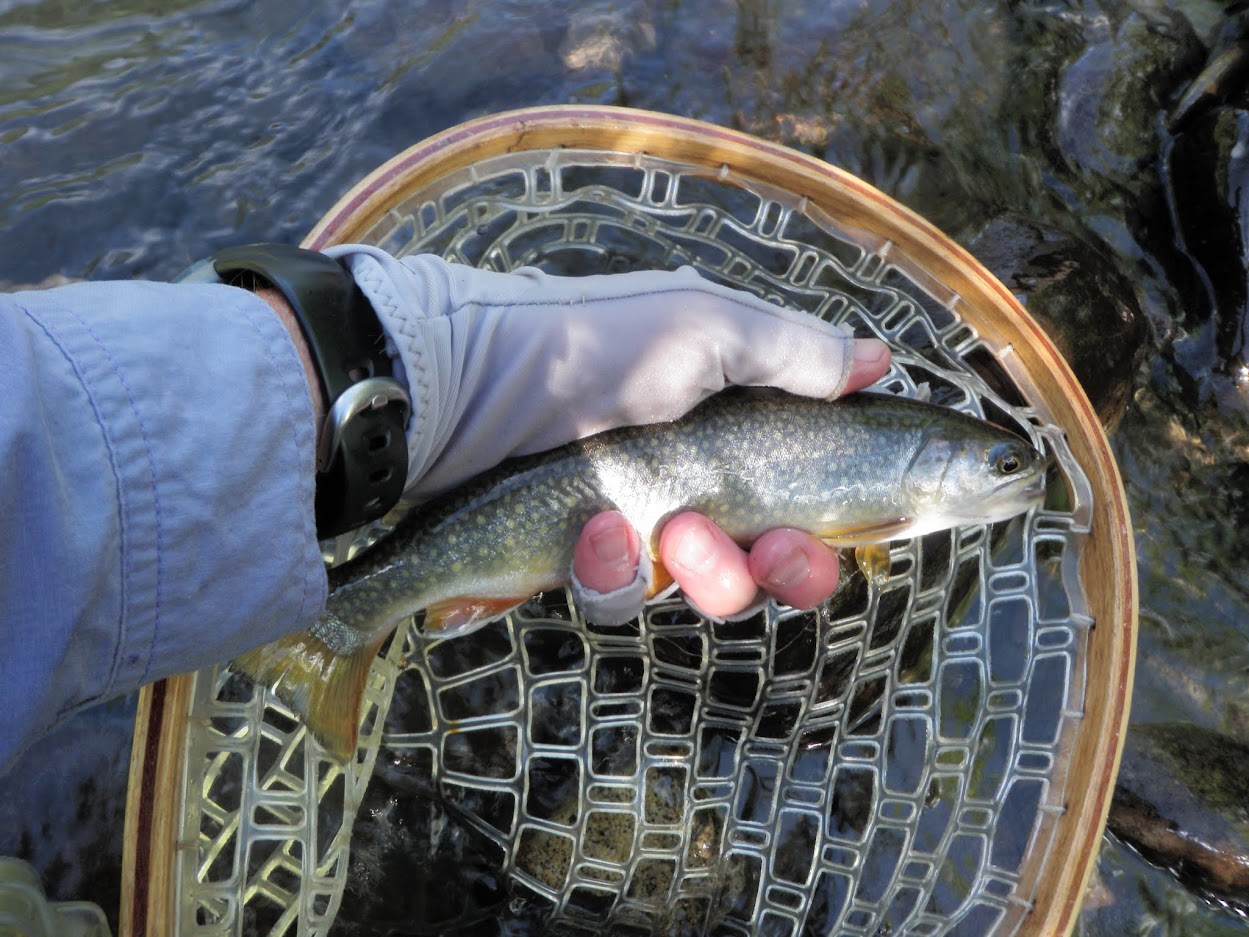 Surprised by a Brook Trout

When I reached the group camping area, the river narrowed and flowed tight to a high bank. I did not wish to undertake the challenge of circling around this obstacle, so I took advantage of the group campground road and walked back to the paved road and then returned to Bogan Flats. The Santa Fe was not parked at our campsite, so I decided to march the length of the campground to investigate the water at the lower end. The river split around a tiny island, so I waded across the smaller channel to the point of the island and worked some pockets with my nymphs. The indicator dipped, and I set the hook only to feel significant weight bowing my rod. Could this be a bigger fish to end my day on the Crystal? Imagine my disappointment when I stripped in a twelve inch whitefish that was attracted to the iron sally.

I was now disappointed with nymph fishing, so I decided to at least have some casting fun. Earlier I witnessed two trout that rose to inspect my neon red strike indicator, so I tied a royal wulff to my line. I’ve had success with this ploy as a response to indicator rises during many previous outings. Much to my surprise, this strategy worked nicely as I landed four additional trout while I worked my way methodically up along the right bank. Two of the landed fish were rainbows and two were browns. I made sure to photograph the brown trout in the waning light to prove that I achieved a Crystal River grand slam; rainbow trout, brown trout, brook trout and whitefish in three hours of fishing. 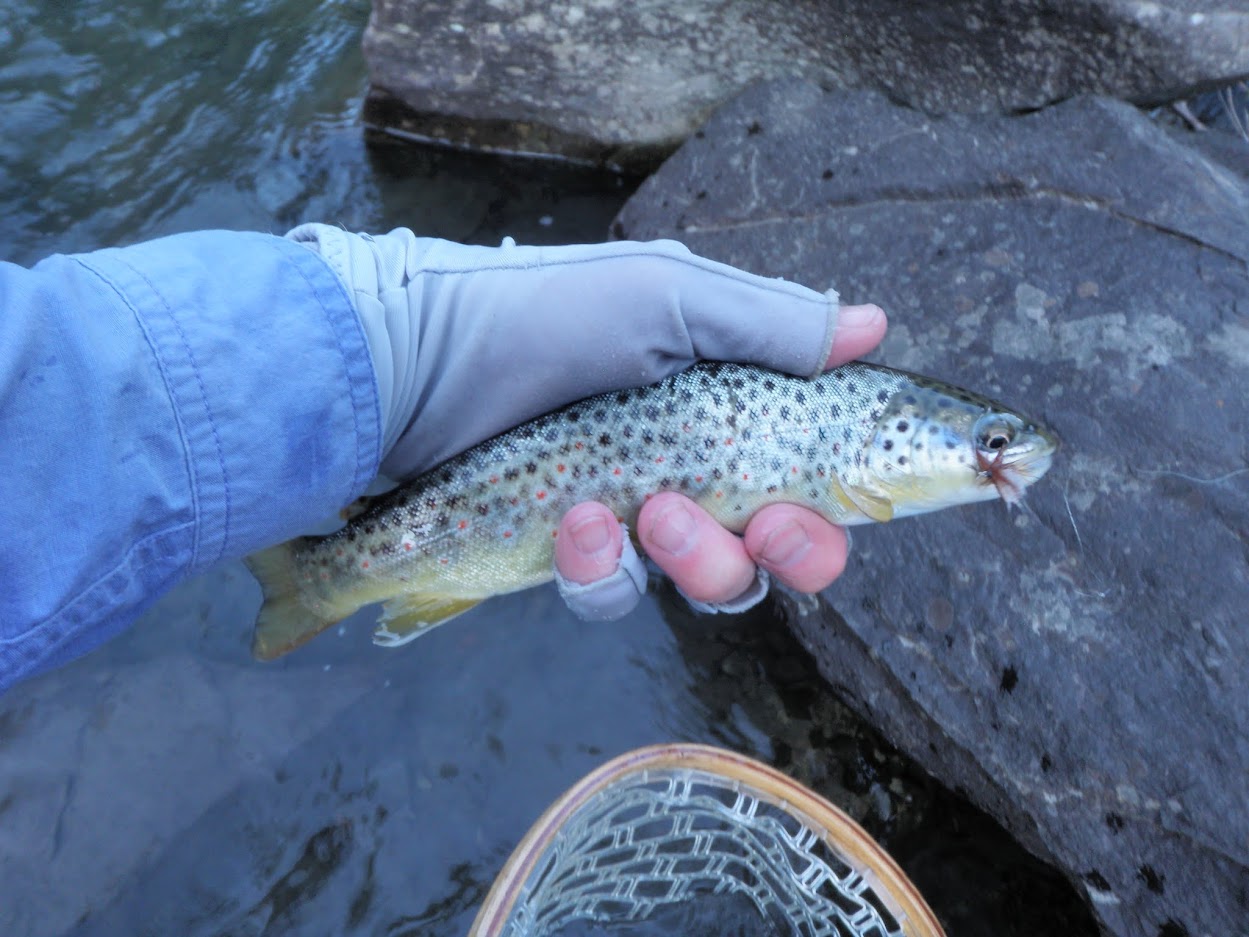 A Brown Trout Completes the Trifecta

At one point I was intently focused on casting and watching my fly, and I hooked and landed a small brown. As I released the fish, I heard a voice from high on the bank above me congratulating me on my success. I turned around and gazed upon a woman and a dog, and she seemed keenly interested in my every move. She told me that she was enchanted by the rhythm of my casting and fish catching movements.

I ended my day with an avid spectator and dry fly success, and I managed to reach double digits with twelve fish landed in three hours. I suppose it was a decent outing, but I yearned for greater size and the addictive tug of a tougher fish on my rod. Perhaps tomorrow the Frying Pan could quell my desires for better fish.