Location: From where I ended in the morning to the fence behind Viola Park

I was still glowing from the excellent morning of fishing when I discovered Jane walking along the highway on her return from shopping in Viroqua. We were both anxious to undertake a canoe trip so we changed into our swimsuits and jumped in the Ford Fiesta and made the drive to Ontario, WI where several canoe outfitters were located.

We traveled north through Westby and then on to Cashton where we turned eastward and drove to Ontario, WI. We were both amazed at how similar this area of Wisconsin was to central Pennsylvania. The landscape was a patchwork quilt of neat farmland. We rolled from hills to valleys, crossed small streams and encountered three or four Amish driving their horse drawn carriages on the rural roads. We also passed a few farms with horse drawn plows in action. 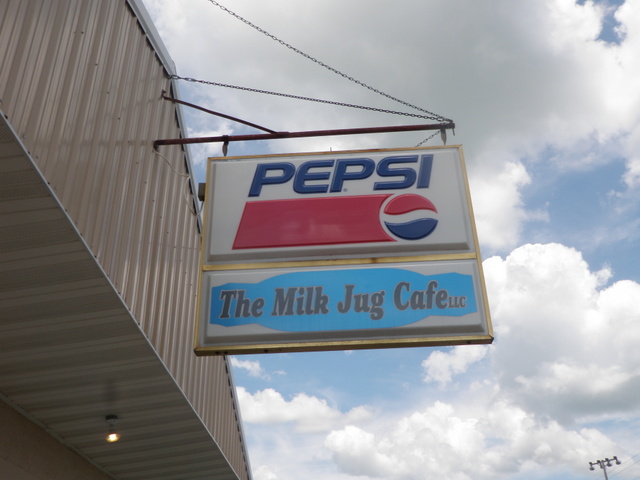 Lunch Spot in Ontario, WI Where Our Canoe Trip Began

Since Ontario is a hub for canoeing we assumed there would be numerous eating establishments catering to the tourists who flocked to this area. This turned out to not be the case as there were four canoe outfitters but only one restaurant, the Milk Jug Cafe. On this gorgeous Thursday, Jane and I were essentially the only patrons of the Milk Jug Cafe, and we soon discovered that it was free milk month for all of June. Jane enjoyed a free cold glass of milk with her lunch while I passed on the offer due to my lactose intolerance. 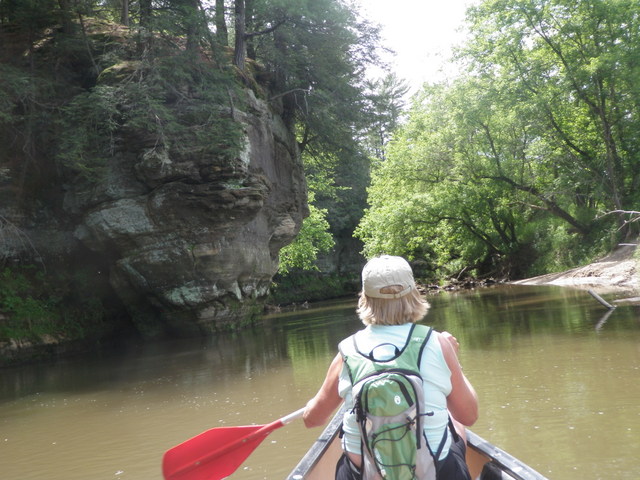 For some unknown reason we selected Mr. Drifty Canoes over Mr. Duck and Titanic. Titanic didn’t convey safety to us, and Mr. Duck seemed a bit juvenile. We paid for a two hour float, and then Mr. Drifty led us to the take out at bridge four where we left our rental car. We rode back to Ontario in the Mr. Drifty van, and then we jumped in the canoe and pushed off on our river adventure. Jane claimed a seat in the bow, and that left Dave steering from the stern. We actually completed the float in one hour and fifteen minutes as we apparently did too much paddling and not enough floating and relaxing. The whole experience was delightful as there was only one mild rapid, and the only danger was avoiding the overhanging branches as the river curved and snaked through the beautiful Driftess countryside. There were numerous high rocky walls on both sides of the river that added a Tom Sawyer and Huck Finn aura to the experience.

When we reached bridge 4, we dragged our canoe up the concrete ramp and left it in the grass at the top, and then we hopped in the car and returned to Viroqua. I was still riding a high from the morning fishing and enthusiastically anticipated a return to Camp Creek. Jane decided to accompany me, and I described the small Viola Park as a place where she could read for the two hours I planned to fish. I also warned her about the likelihood of persistent gnats, but she decided she could take refuge in the car if the bugs proved to be too great a menace.

All went as planned, and we pulled into the Viola Park turnaround, and I prepared to fish. I was ready between 5 and 5:30 and decided to walk down the road again, and then I skipped the water that I covered in the morning and began fishing at my ending point. I tied on the Chernobyl ant and beadhead hares ear that earned my confidence in the morning and began my stint of evening fishing with renewed confidence. It was a pleasant evening with some clouds in the sky, but I fished comfortably in just my fishing shirt with no additional layers. Once again I sprayed myself liberally with insect repellant, and although I did not suffer any bites, the Off did not seem to have much impact on the tiny gnats that emerge in dense clouds on Wisconsin evenings in June. 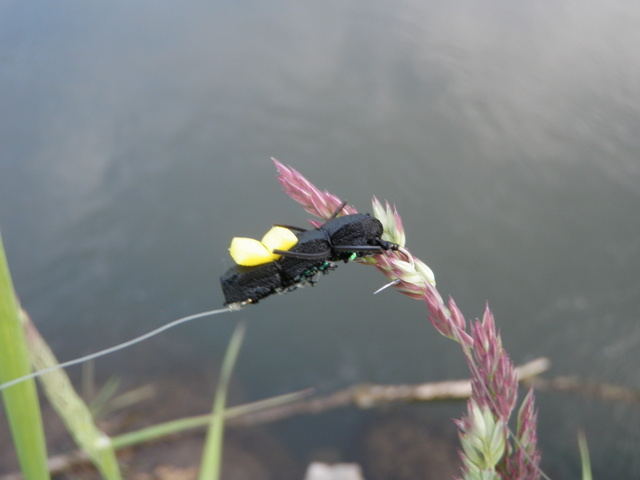 Chernobyl Ant Was the Top Fly

The stretch of water I fished in the evening was more akin to the water below the bridge where I began the morning session, as it consisted of many pools and short riffles with several deep bend holes. It appeared that a group had done stream improvements on the outside banks of many of the bends as a series of large boulders created a reinforced barrier to contain the stream. The boulders were constructed like a wall, and that is what leads me to believe that they resulted from a project. 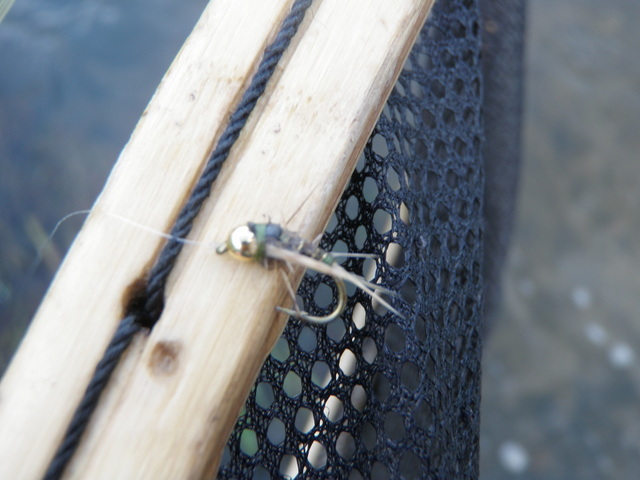 Another Shot of the Hares Ear

However they came into being does not matter, but they proved to be great fish holding areas. I landed six brown trout during my two hours of fishing, and at least three of them grabbed the beadhead hares ear as it drifted tight along the rock wall. Once again the slow moving sections of the pool did not produce any signs of trout, and most of the fish that showed interest in my offerings emerged from the seams and edges of faster water.

I moved along quickly and jumped over the unproductive slow moving water to concentrate on the runs and riffles at the heads of the pools. Because of this rapid progress, I arrived at the barbed wire fence that runs perpendicular to the stream behind Viola Park by 7:30. I’d fished for two hours and landed six fish, and my head was surrounded by annoying gnats, so I decided to follow the fence line back to the park and call it a day.

And what a day it was! I went from ridiculously low expectations including writing off evening fishing to landing 18 trout over 4.5 hours. In truth the fish were on the small side, but the water was clear and rich with aquatic weeds and reminded me of small spring creeks in Pennsylvania. Best of all the fish were receptive to my dry/dropper approach, and other than fishing dry flies to a heavy hatch, this is my favorite method of fishing. I would certainly jump at a future opportunity to fish in the Driftless Area particularly if the streams were clear and flowing at normal levels. Jane and I celebrated our wonderful day in the Driftless Area with New Glarus lagers from Dave’s Pub in Viroqua. It was an appropriate wrap up to a fun day of adventures.