Location: Within the town of Fort Collins

The forecast of a 63 degree day along the Front Range of Colorado on Friday, November 15 caused incessant brain messages that implored me to visit a trout stream. I contacted @rockymtnangler, also known as Trevor, and learned that he was off from work on Friday and planning a day of fishing. With that news in hand we planned a day on the Cache la Poudre River in Fort Collins, CO. Trevor logged sixty plus days on the city section of the Cache la Poudre, and he has become a bit of an expert on the nuances of the urban fishery. In fact, Trevor shared a sample of his impressive art work with me in the form of a pen and ink rendition of a map of the Cache la Poudre. I am convinced that Trev could have a future in art, if he tires of his current occupation.

We agreed to meet in Fort Collins at 9AM, and I arrived at our designated rendezvous point at that exact point in time. Trevor was already clad in waders, and since he owns a rod vault, his rod is in a constant state of readiness. He waited patiently, while I cycled through my preparation routine which included the assembly of my Orvis Access four weight. 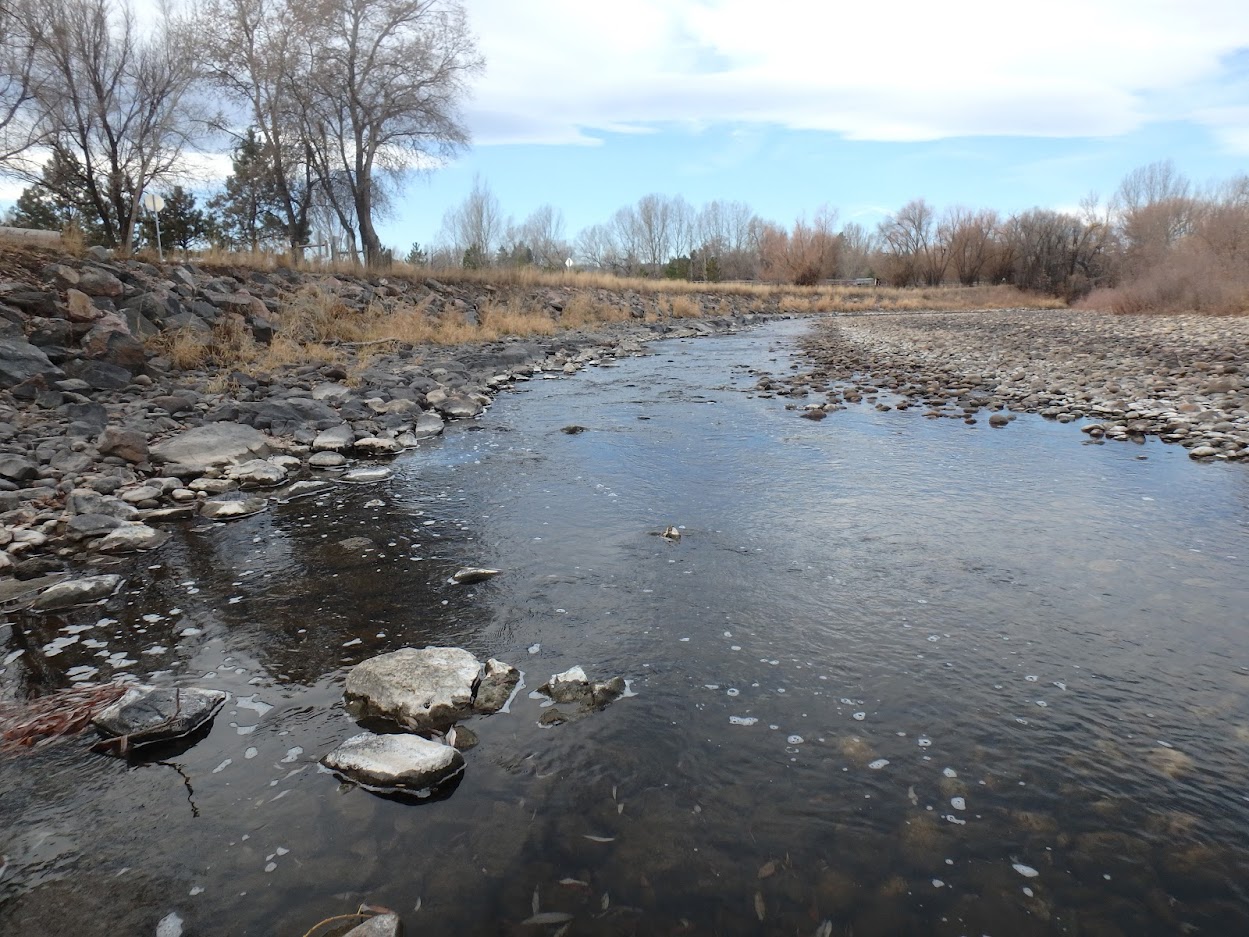 The air temperature remained quite chilly at this early juncture of the morning, so I slid into my North Face light down coat. By the time we quit at 12:30 the temperature rose to the low sixties, but I was never uncomfortable in my chosen attire. In a text message on Thursday Trevor warned me to temper my expectations due to the low water conditions, and evidence of his advice was apparent, as we approached the low narrow stream of flowing water to begin our day. I estimate that only 1/3 of the stream bed was covered by water with the remainder a jumble of bleached river rocks.

We hiked downstream for .5 mile and jumped in the river just below the water gauge bridge. Trevor grabbed a pool downstream, while I targeted a spot, where the river flowed against the north bank and created a nice deep run. Within minutes Trevor hooked and landed an eight inch rainbow trout, but I was unable to lure anything to my line. I began my day with a Jake’s gulp beetle and a size 16 salvation nymph, as I searched for a surface fly that was small yet visible and buoyant enough to support a beadhead dropper. 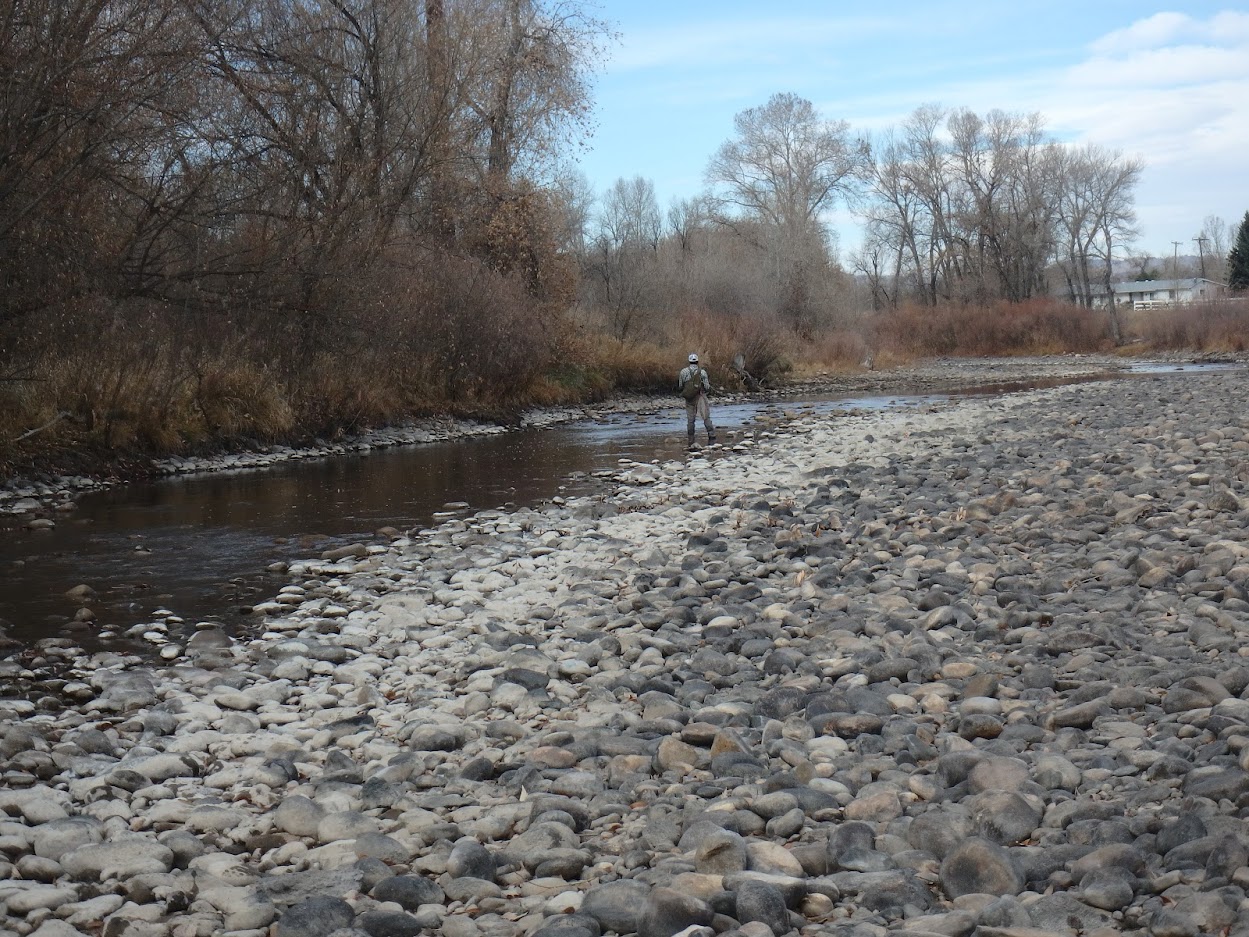 Trevor Focused on a Run

Trevor and I continued fishing upstream through the remainder of the morning and played hopscotch among the intermittent attractive pools. The most productive locales featured a bit of current that fed large smooth pools, and the trout seemed to gravitate to the top to intercept food, before it spread out in the slower sections. Within the first thirty minutes Trevor added a second rainbow, and both landed fish attacked his small parachute Adams. We both were convinced that my nymph should be generating more interest, so I swapped the salvation for a beadhead sparkle wing RS2. Surely the Poudre trout could not resist the small baetis imitation in the prevalent low conditions. Since the beetle was difficult to track in the shadowed areas, I opted for a peacock body hippie stomper with a white wing, and this move proved effective, as the large wing contrasted nicely with low light conditions.

My strategy seemed viable, but in a twist of trout contrariness, the hippie stomper became the desired food object and not the RS2. During the remainder of my time on the water, two rainbow trout smashed the attractor dry fly, but the small nymph went unmolested. In fact, I swapped the RS2 for a size 18 beadhead pheasant tail nymph for an extended period, and it also was ignored. 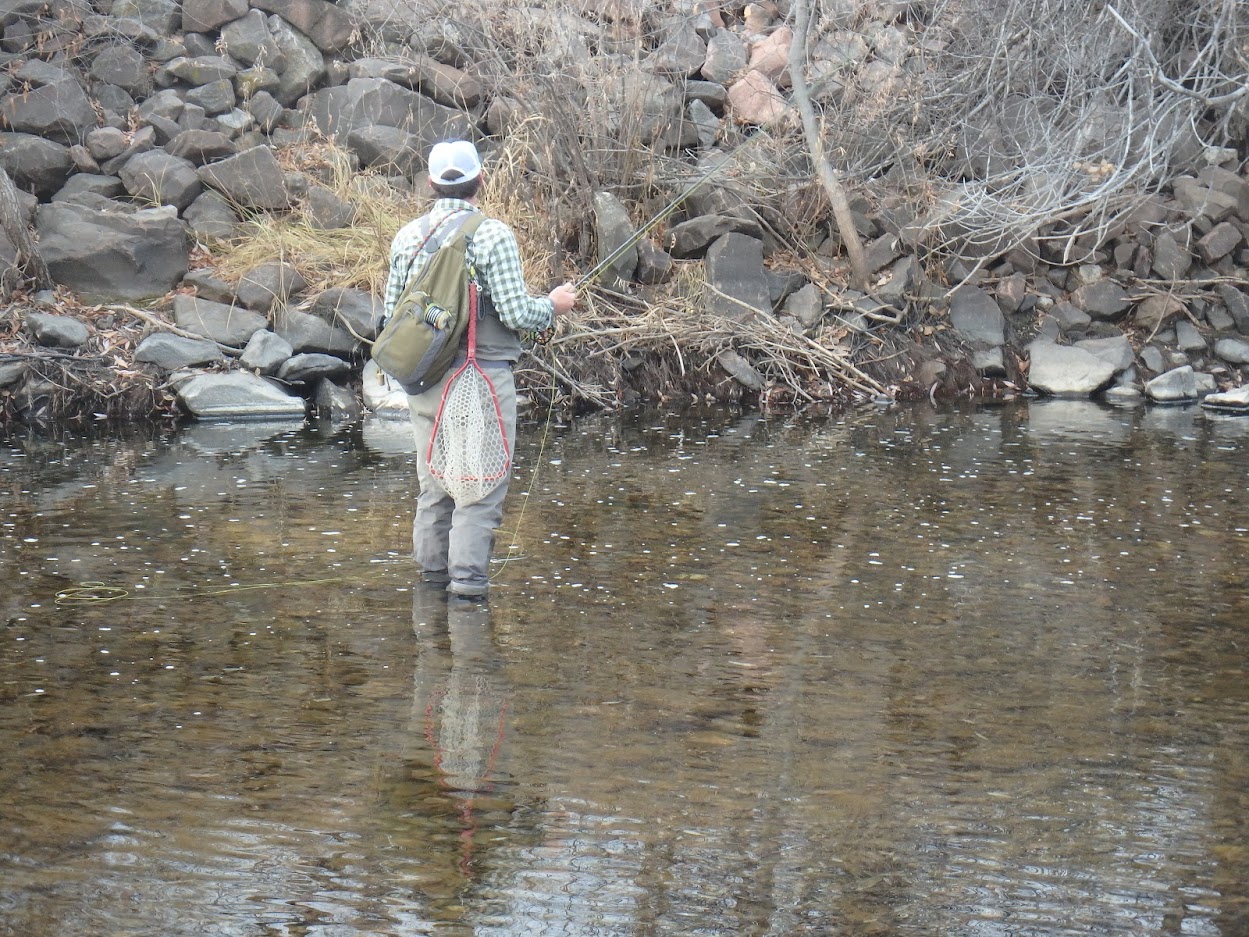 A Pod of Rainbows Next to Trevor

By 11:30 the infrequent rises in the pools ceased to appear, and we persisted in our upstream mission, but the fish were no longer willing to accept our offerings. At a spot that contained a large quantity of man-made stream improvement boulders, we agreed that the best fishing of Friday, November 15 was behind us, so we climbed the bank and ambled back to our cars. Once we removed our gear, Trevor led the way to the Odell Brewing tasting patio, and we quaffed craft brews and enjoyed the unseasonably warm afternoon.

The fishing was slow, but my expectations were appropriately lowered. The highlights of Friday were the companionship of a fishing friend, pleasant weather, and a tasty brew at Odell Brewing. Any nice day with a few fish is a bonus in mid-November.