Location: West of the Narrows.

The Cache la Poudre River reinforced itself as one of my favorite streams in Colorado. The fish are relatively small; but how can one not admire the canyon setting, the nearly endless miles of public access and the high density of fish? I was very anxious to pay the northern front range freestone a visit in 2019, and Tuesday, August 13 became that day.

I struggle to translate the DWR water gauge readings for the Cache la Poudre, but the fly shop reports were glowing; and my friend, Trevor, provided convincing testimony to the merits of making the trip. I departed my home in Denver a bit after 7AM and arrived at a paved pullout across from the river by 9:30AM. Traffic volume was a bit heavy, until I traveled north of suburban Denver. I glanced at the dashboard temperature reading, as I traveled west in the canyon and noted that it was 66 degrees, so I chose to wear my waders and new Korkers wading boots, although the air temperature eventually spiked to around 80 degrees. 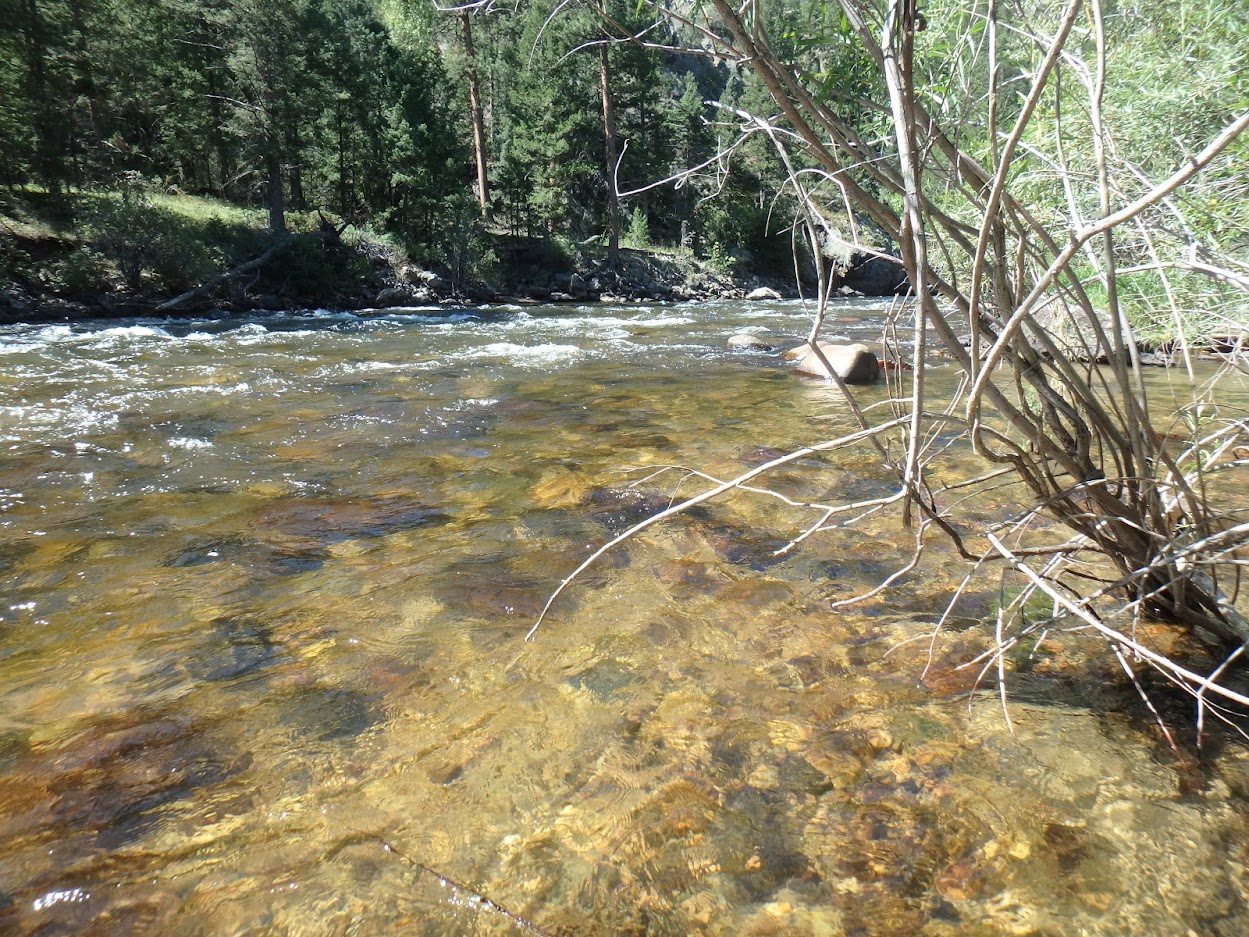 The flows remained higher than normal for August 13, but I was actually pleased with the river conditions. High flows translate to colder water temperatures, and they enable closer approaches than are necessary at seasonally low summer flows. Clarity was excellent, and I marveled at the crystal clear water, as it tumbled over the many rocks and boulders in Poudre Canyon. The river conditions on August 13 reminded me of those that I generally encounter on July 13 in normal years. 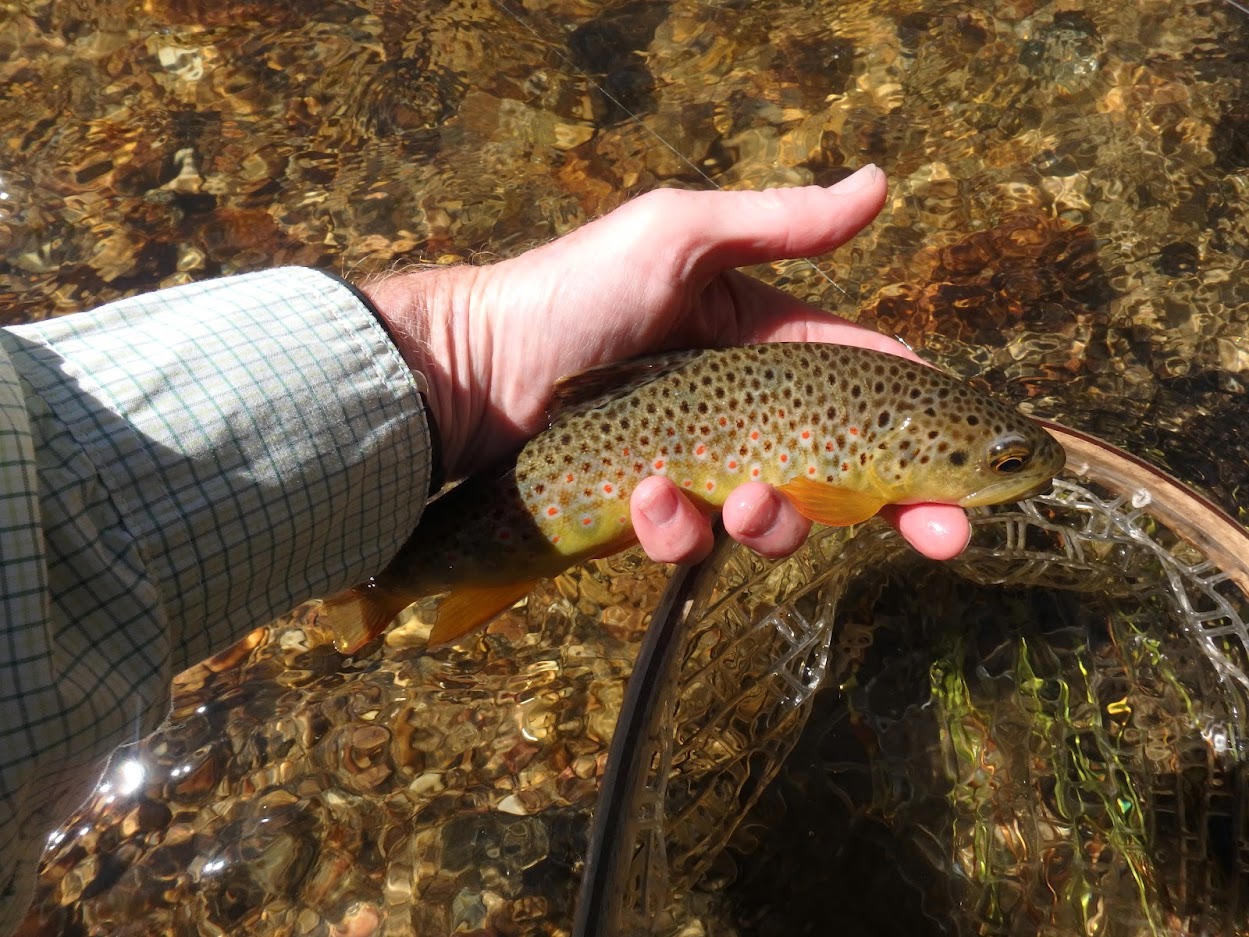 I chose my Sage four weight because of the higher flows, and when I was prepared, I sauntered down a bank across from the Santa Fe and began fishing. I knotted a yellow size 14 stimulator to my line and began to prospect likely fish holding areas, but I was unsuccessful in the first ten minutes, so I initiated a change. I swapped the stimulator for a peacock body hippie stomper and added a beadhead hares ear on a relatively long dropper. This combination produced results, and I landed two small brown trout that snatched the hares ear.

When I plucked the hares ear from my fleece wallet, I noted that my supply was shrinking, so I climbed the steep bank and returned to the car to restock from my boat box. When I arrived at the car, I decided to drive west closer to my anticipated exit point, but when I returned to the river, I realized that moving the car distracted me from my initial mission of augmenting the hares ear supply! I resumed fishing for a short distance, but then I once again scaled the bank and replenished my supply of hares ears in my fleece wallet. 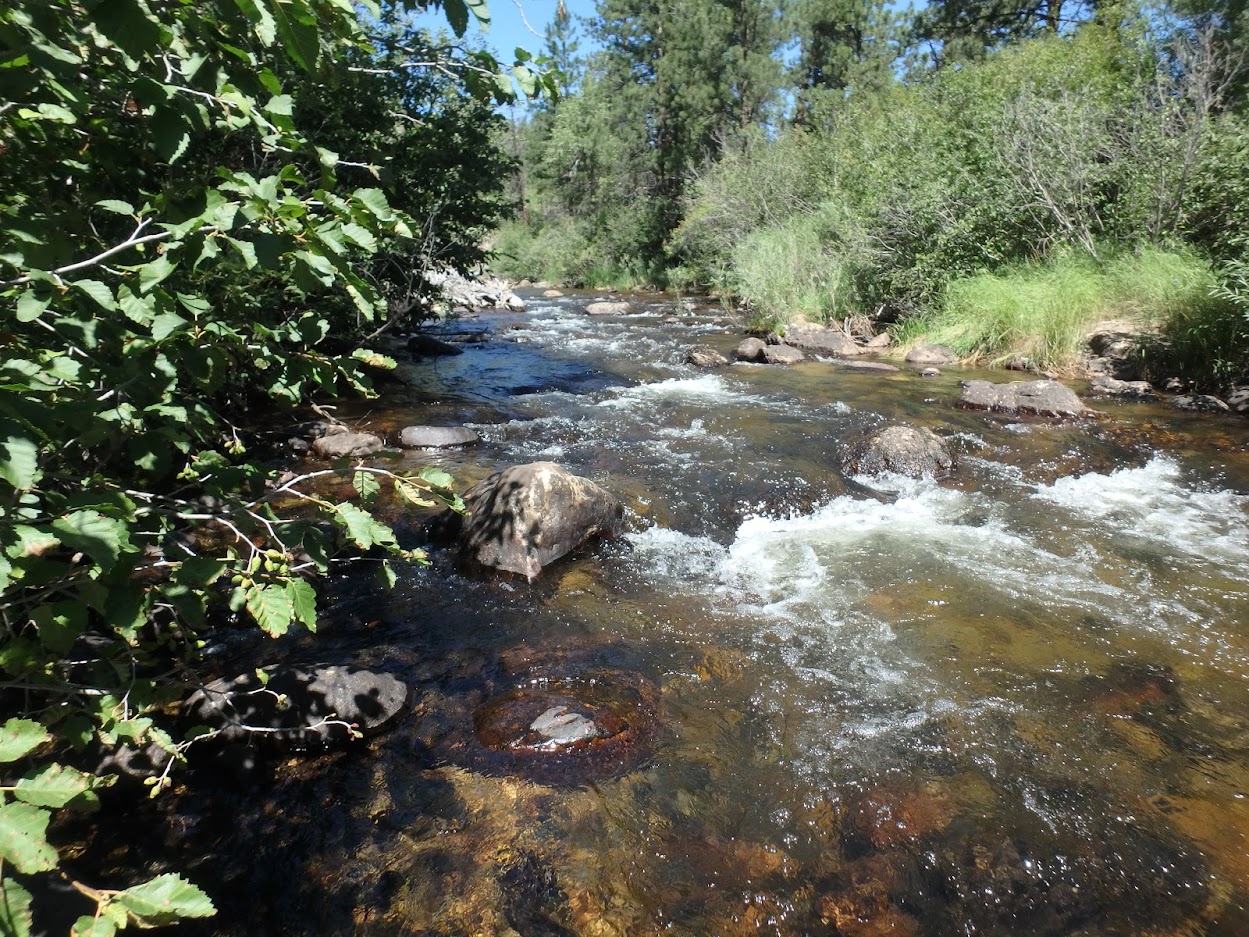 Side Channel Yielded a Couple Trout

With the hares ear episode finally behind me, I returned to my last exit point and resumed my pursuit of Poudre trout. Ironically I concluded that the hares ear was underperforming, so I replaced it with a size 12 prince nymph and a salvation nymph. The hippie stomper, prince and salvation combination advanced my fish catching pace, and I attained twelve by the time I broke for lunch at 12:30PM. Most of the trout landed in the late morning time frame grabbed the salvation nymph, while a few outliers chose the prince. Just before lunch I executed some downstream drifts through a narrow seam, and a decent fish elevated and inspected the hippie stomper but turned away at the last instant. 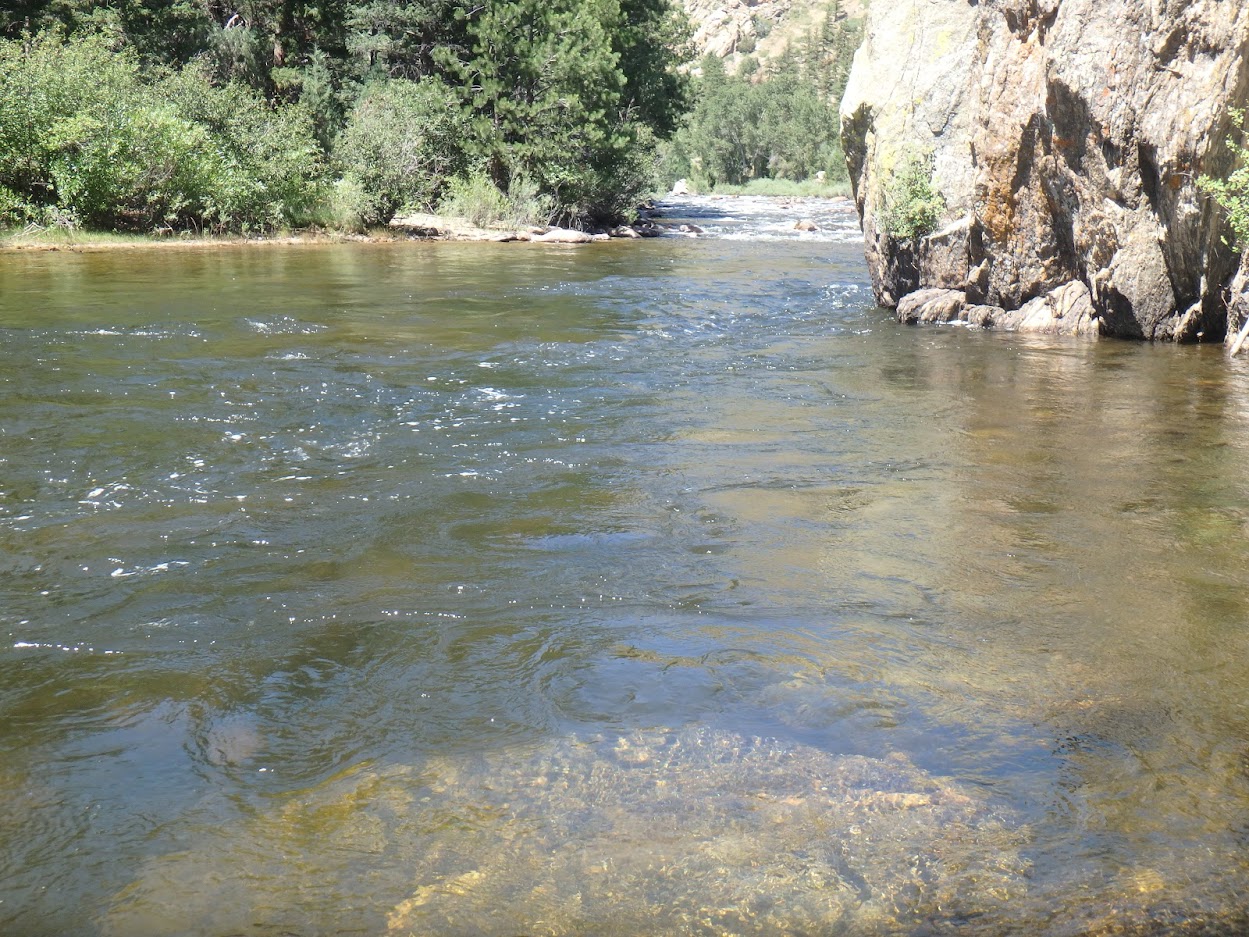 Deep Pools Were Not Productive

As I munched my lunch, I pondered this situation and decided to convert to a parachute green drake. I knew from previous seasons that size 14 green drakes were present on the upper Cache la Poudre, but I was not certain whether they hatched during the high water of July or were delayed into August. The fly shop report did not mention them, so I assumed their time had passed. I also knew from past experience, that trout retain a long memory of the large olive colored mayflies, and I speculated that the refusals to the peacock hippie stomper were attributable to green drake lovers. The color and silhouette were close to a green drake, and this prompted a close inspection, before the fish decided that the profile and color deviated a bit from the naturals. 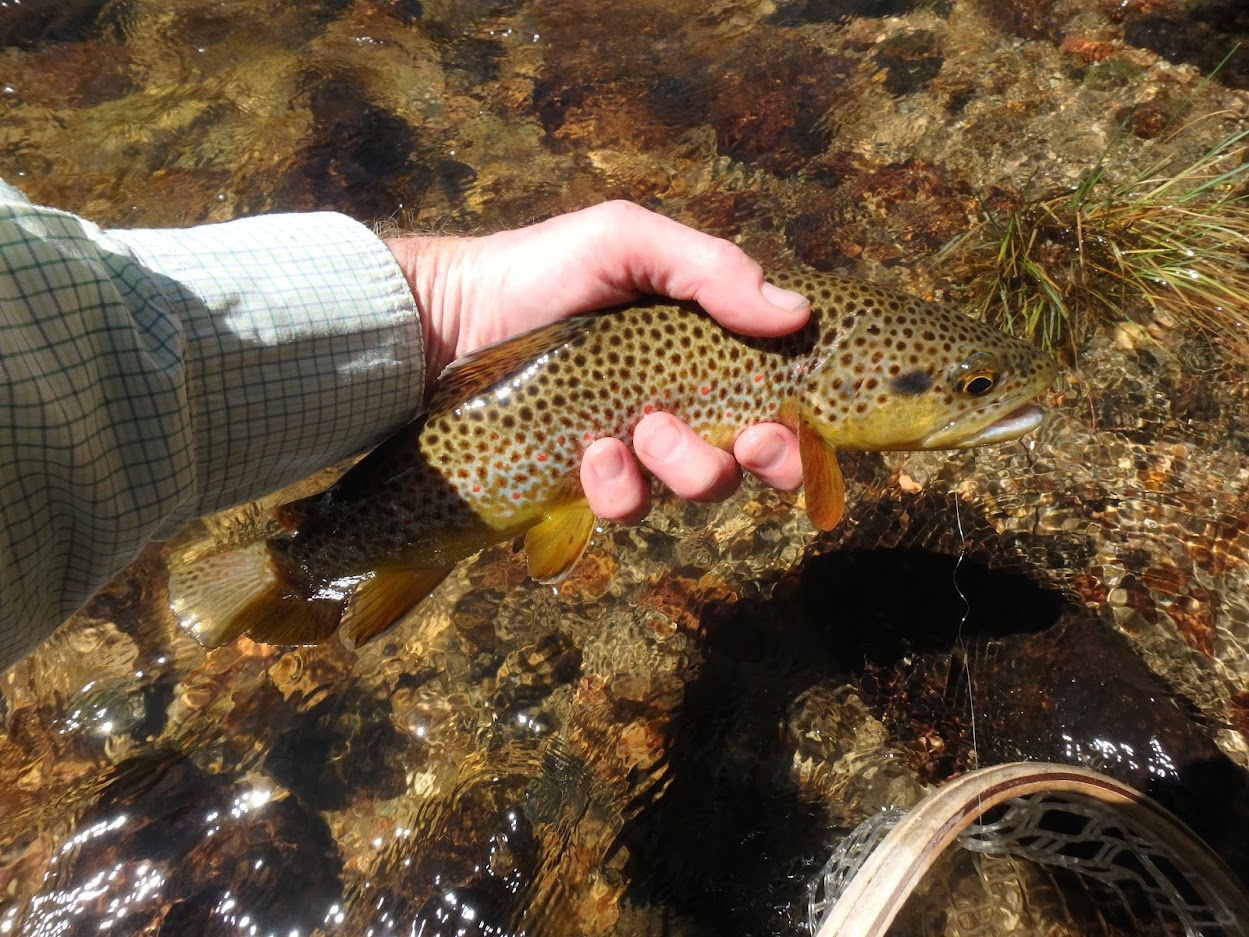 I followed through on my idea and removed the dry/dropper components and tied a nearly perfect parachute green drake with a white turkey flat wing to my line. What a move this turned out to be! Between 12:30PM and 2:00PM I incremented the fish counter from twelve to twenty-four. A few refusals occurred, but more often than not a trout rose and slurped the parachute green drake with confidence. I also learned that most of the brown trout were holding tight to the bank in shallow to moderate water, and this observation enhanced the efficiency of my fishing. I mostly ignored all but the shallow edges of the river, and I was pleasantly surprised by the number of willing eaters that emerged from fairly shallow riffles and runs very close to the bank. One might expect these to be diminutive dinks, but quite a few stretched to the twelve inch mark, and that is a respectable size for Cache la Poudre trout. 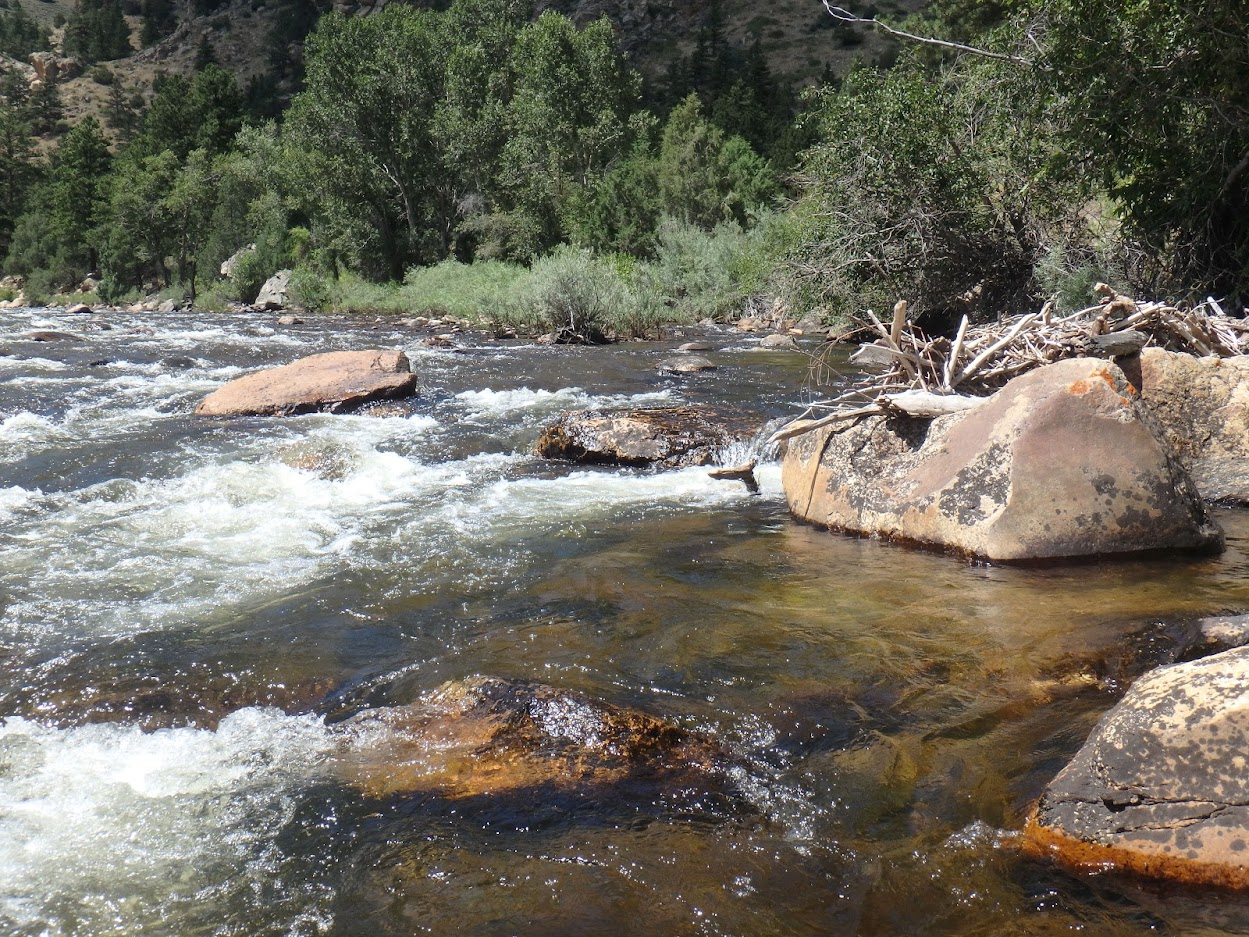 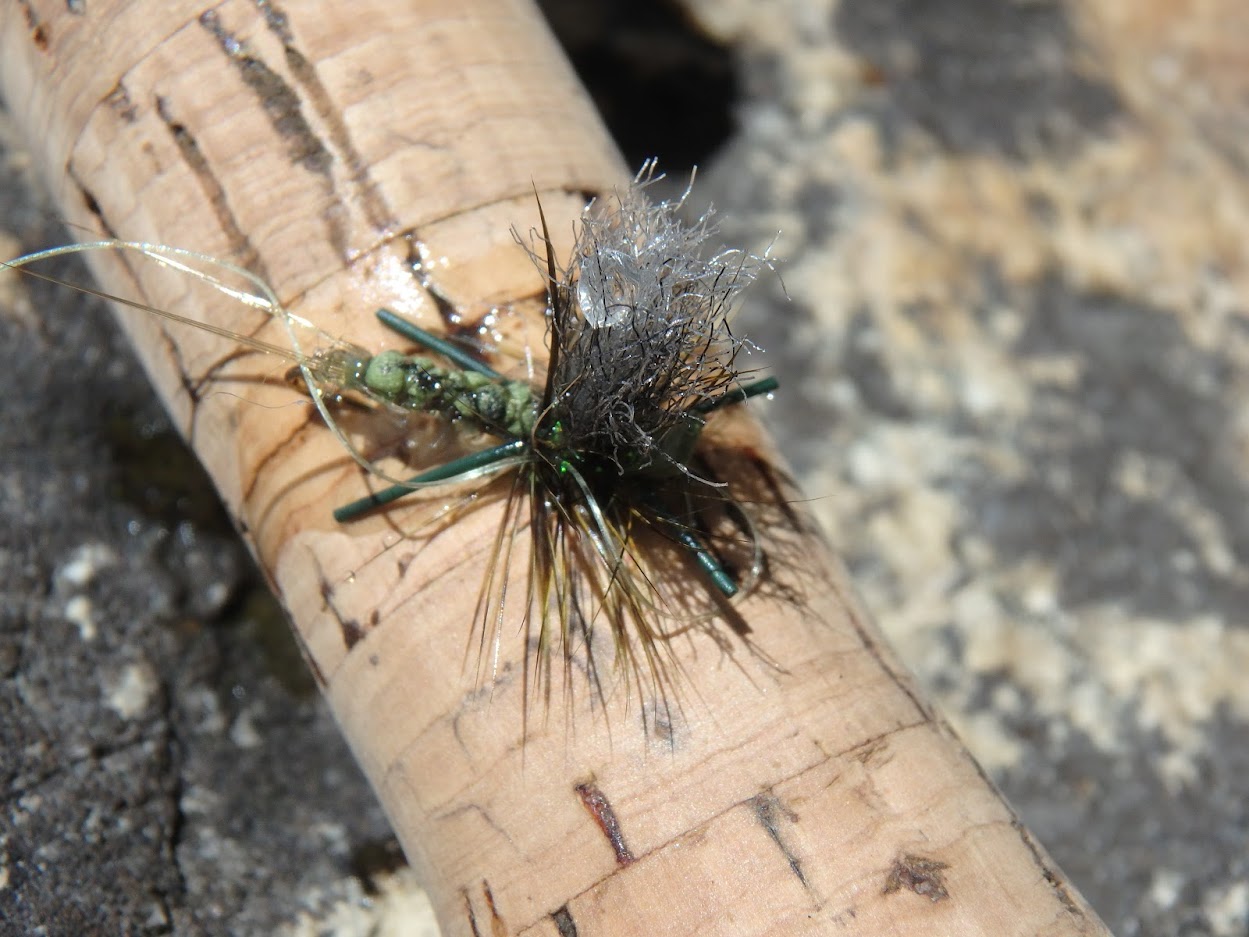 When I reached twenty-four landed fish, I was quite satisfied with my day, so I decided to introduce one of my Andrew Grillos user friendly green drakes to the local trout. I cast the foam enhanced green drake version for fifteen minutes, and it produced two trout, but the number of refusals increased dramatically compared to the more delicate and slender parachute green drake. By 2PM my count rested on twenty-six, and the bright sun warmed the air significantly. The riverbed narrowed, and I was pondering a change of scenery, when a group of three young fishermen appeared forty yards above me. The combination of the less desirable river structure and competing anglers motivated me to climb the bank and return to the car. 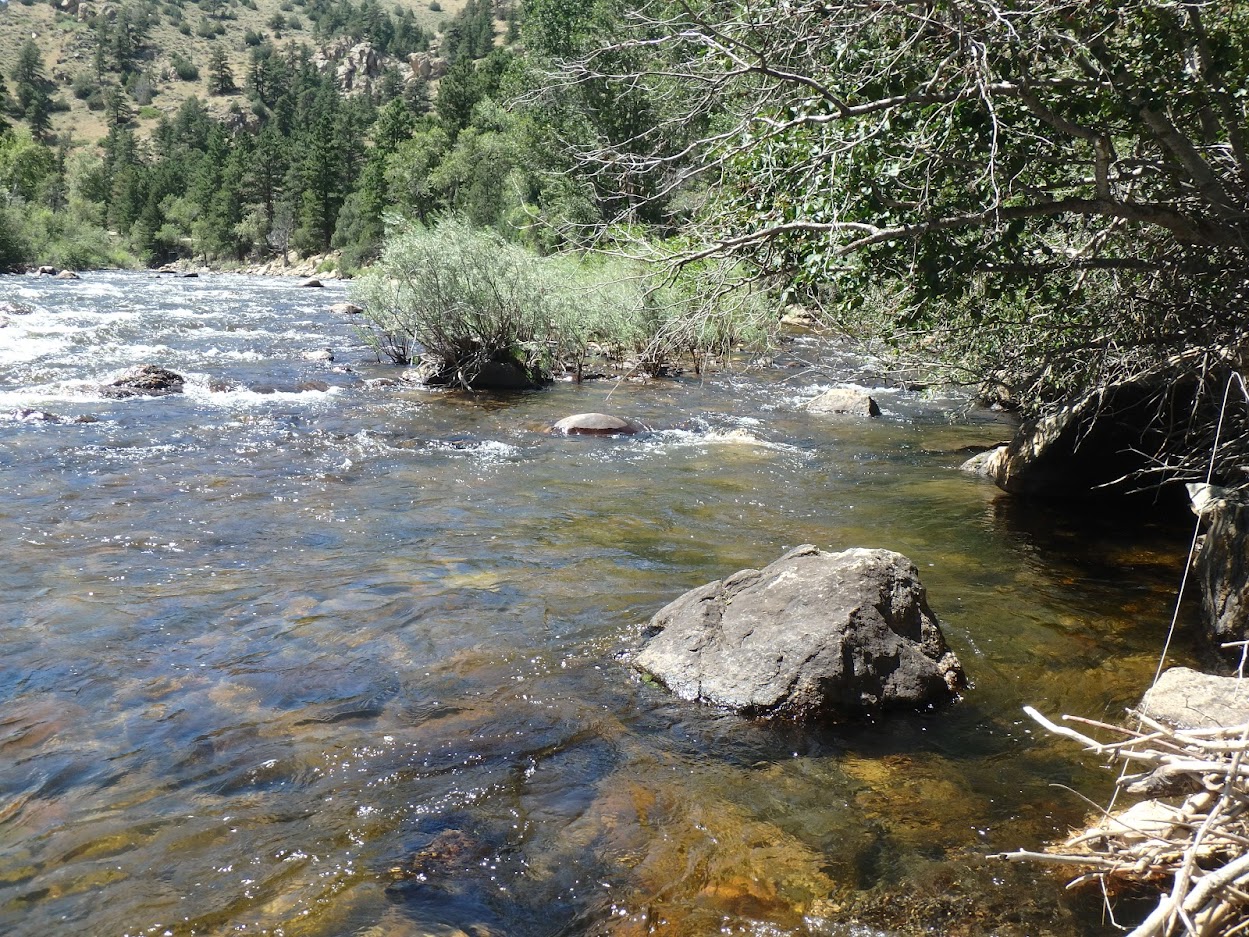 I was not ready to quit for the day, so I drove west and crossed the bridge and parked in a single pullout above the river. I hiked back toward the bridge for .2 mile and then dropped down a short but steep bank. I resurrected the parachute green drake, and I began prospecting the pockets that were along the south bank of the river. The Poudre in this section was running faster than the area downstream, and this factor along with the preponderance of trees and branches arcing over the water made wading and casting a challenge. Some clouds and the angle of the sun created an annoying glare on the water, and this added to the challenge of tracking my fly in my new fishing stretch. I persisted and managed to land two additional brown trout on the parachute green drake, but when I reached the vertical rock wall just below the Santa Fe, I decided to call it quits. A quick glance at my watch confirmed it was 3PM, and I knew my return drive would overlap with Denver at rush hour. 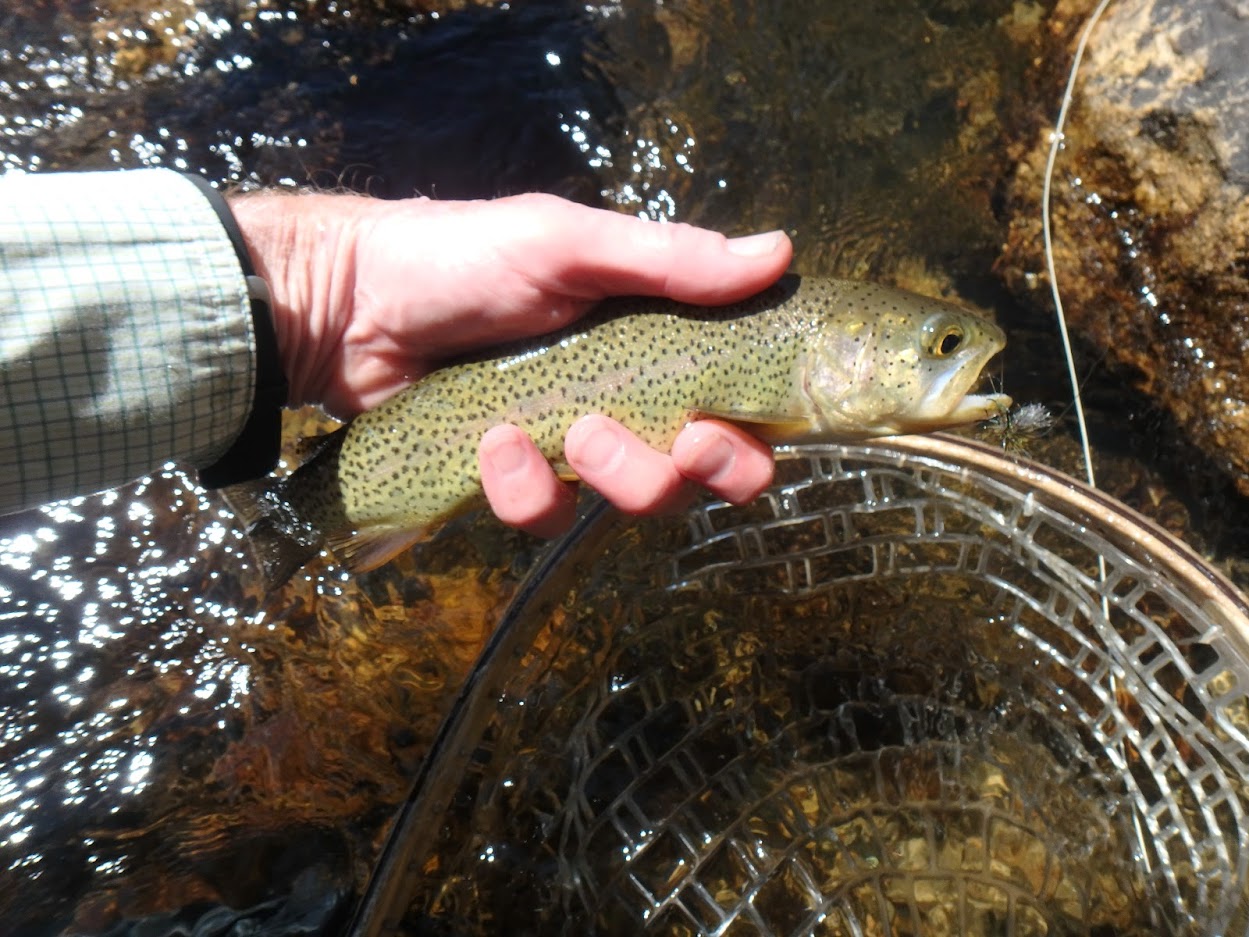 Twenty-eight fish on August 13 was a very successful day by my standards. Yes, the fish were small, with perhaps only one stretching to twelve inches, but hooking and landing sixteen on a green drake dry fly made it special. I never saw a green drake during my five hours on the water, so my assumption about long memories was probably accurate. A return to the Cache la Poudre River during this year of endless run off is a strong possibility.