It is prime western green drake time in 2020, and I initiated my annual effort to encounter this exciting event. I am not certain whether I or the trout anticipate it more, but every year I strive to encounter hatches of this large western mayfly. On 7/10/2020 I met a brief and sparse hatch on the Cache la Poudre River, and I had a hunch that the main emergence had not yet arrived. I decided to make a return trip to the Poudre on 07/17/2020 in an attempt to rendezvous with a longer and denser version of my experience the previous Friday. 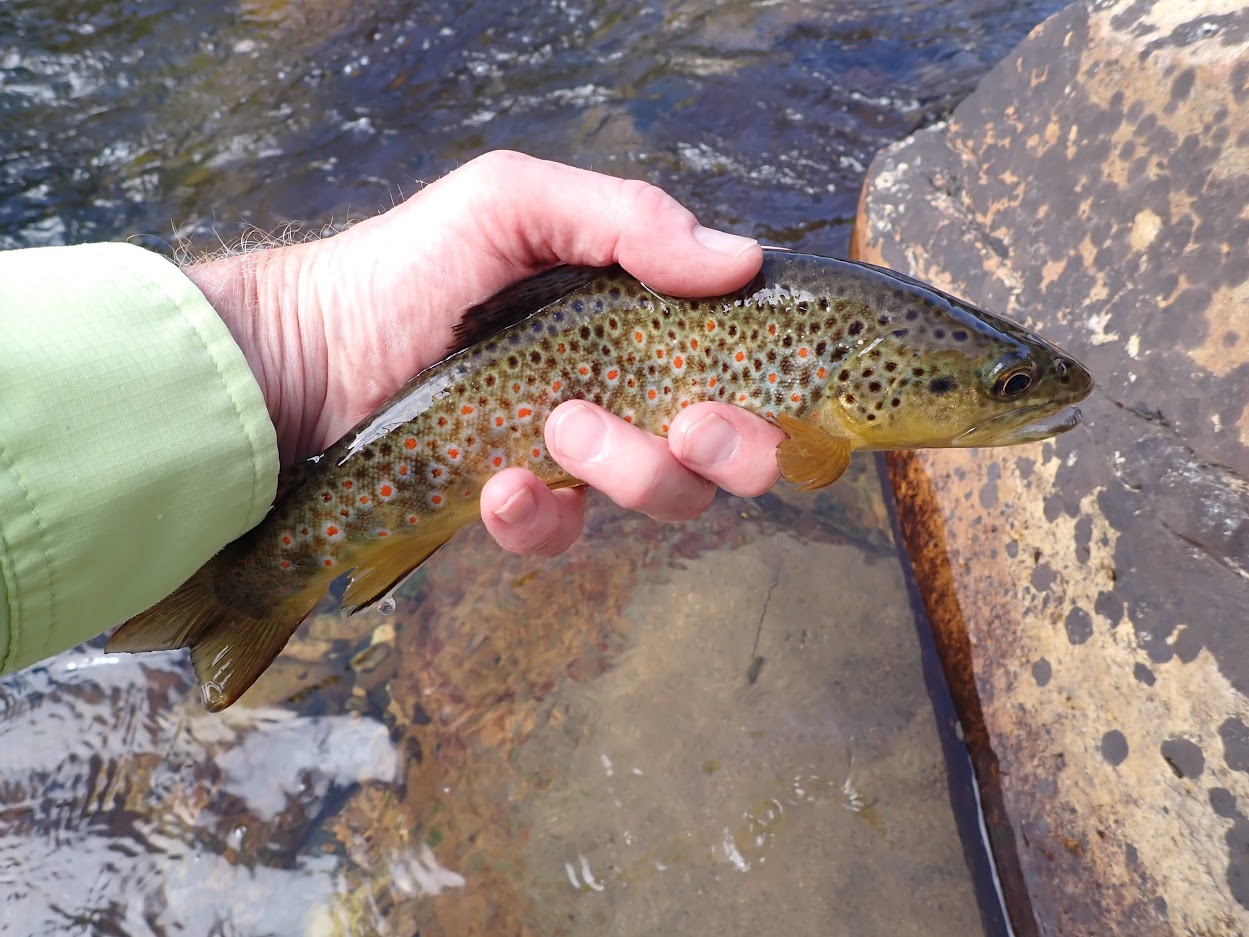 Green Drake Eater at the Start

I managed to depart Denver by 7:45AM on Friday morning, and this enabled my arrival at a pullout along CO 14 across from the Cache la Poudre River by 10AM. Traffic was already building on the twisting two lane through the canyon, and my progress was maddeningly slow. The forecast for high temperatures in Denver approached one hundred degrees, and I suspected that the best fishing would be early. I contemplated wet wading, but ultimately decided to wader up to take advantage of the fly box storage of my wader bib. I need to give some serious thought to my wet wading setup. For Friday’s adventure I elected to assemble my Sage four weight, and once I was completely prepared, I ambled downstream along the shoulder of CO 14 for .4 mile. Originally I conceived the idea of crossing the nearby upstream bridge and then hiking downstream along the south bank, but a quick inspection revealed numerous vertical rock walls that made that plan unattainable.  .4 mile delivered me to a favorite spot, that I fished on my previous visit, but I was near the end of the stretch covered a week ago and thus subject to minimal overlap. 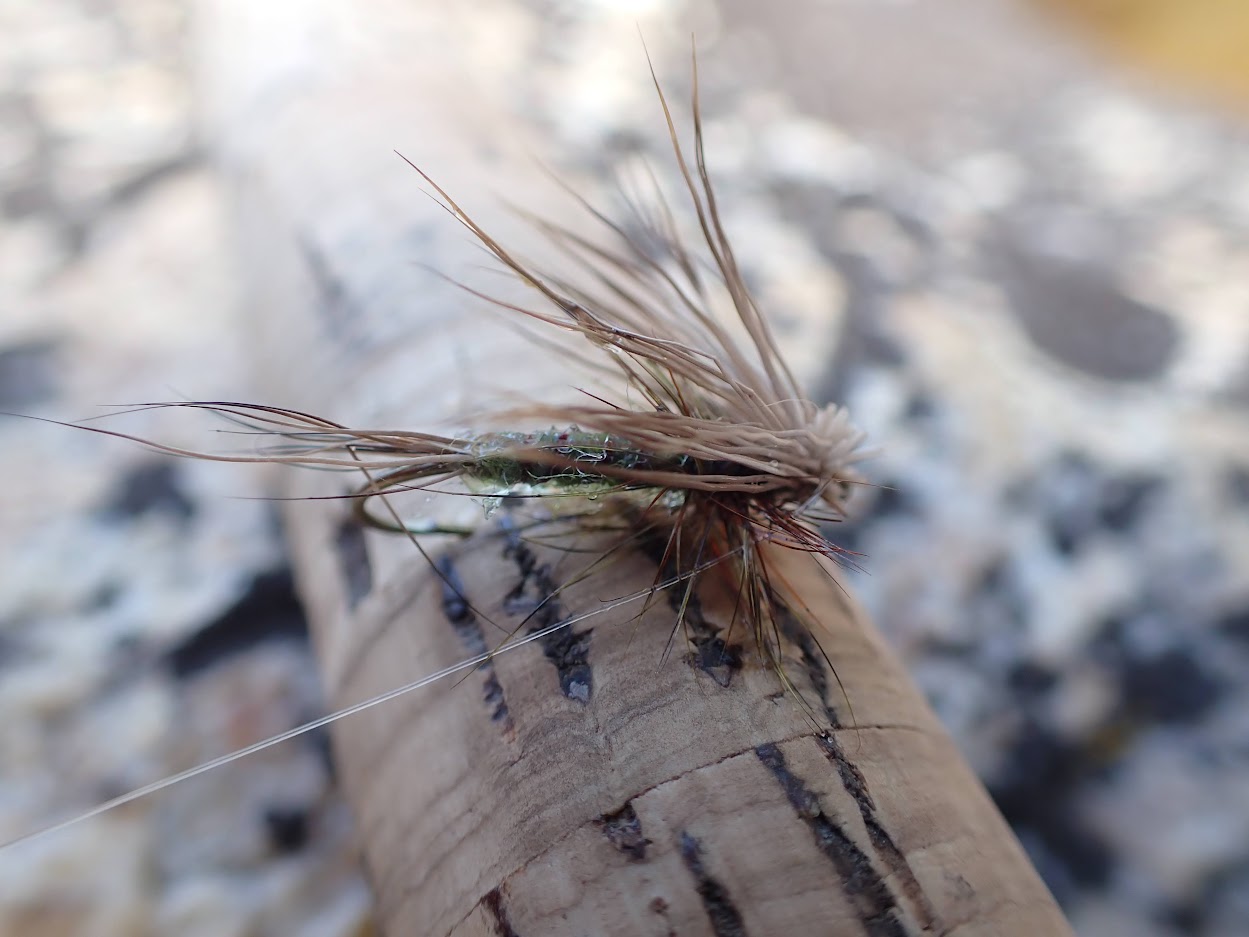 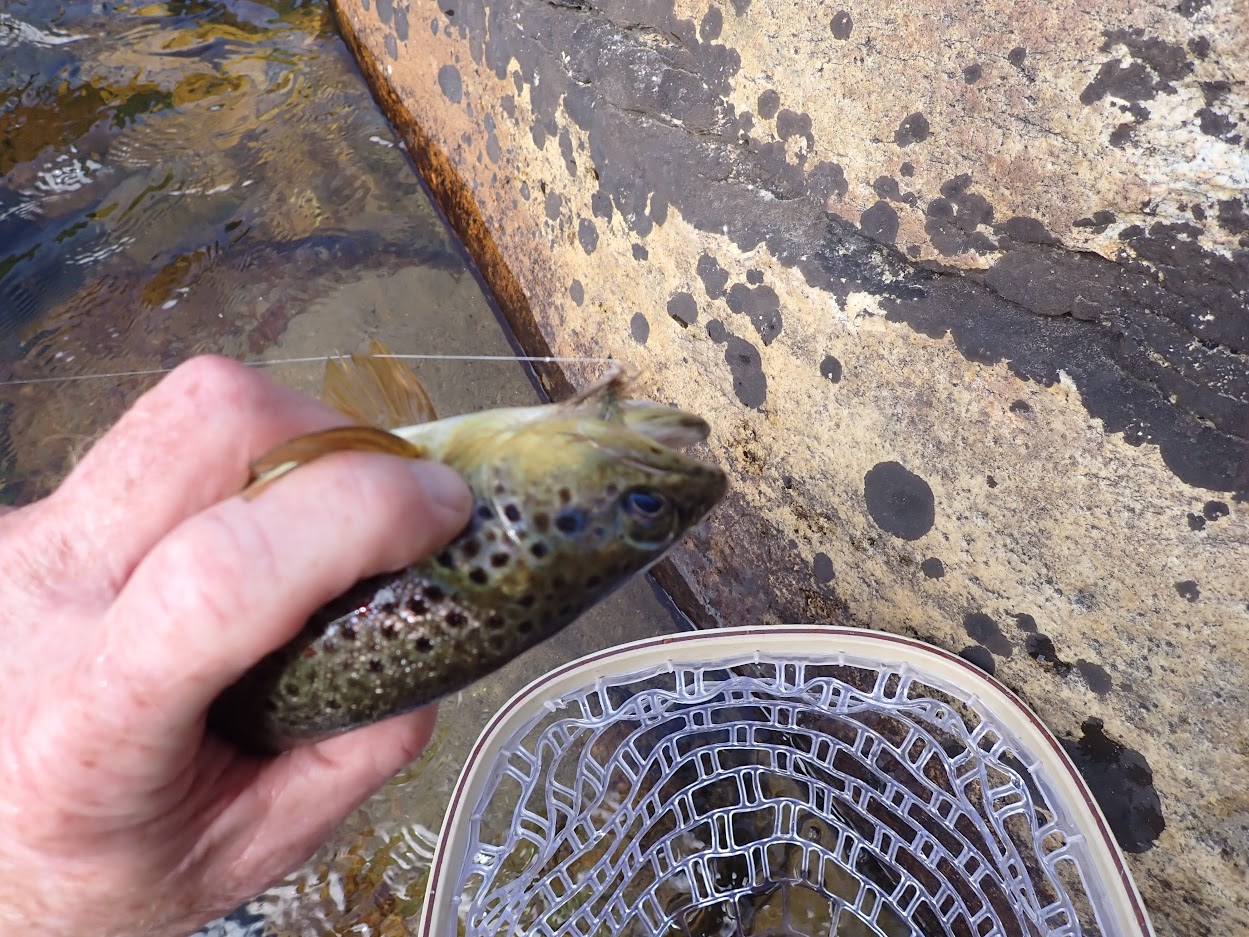 Harrop Hair-wing in the Lip

I deviated from my normal dry/dropper starting strategy and tied a Harrop hair wing green drake to my line. What a choice! A brown trout flashed to the surface and nipped the drake imitation in a small pocket on the first cast.  The second cast fooled a comparable brown in a slightly larger downstream pocket, and then a couple casts to a deep slot toward the middle of the river resulted in another slurp. The magic of the Harrop green drake endured for the first hour, and the fish counter mounted to nine. In short, I relished my first hour of fishing and held my breath with the hope, that it would endure throughout the day. 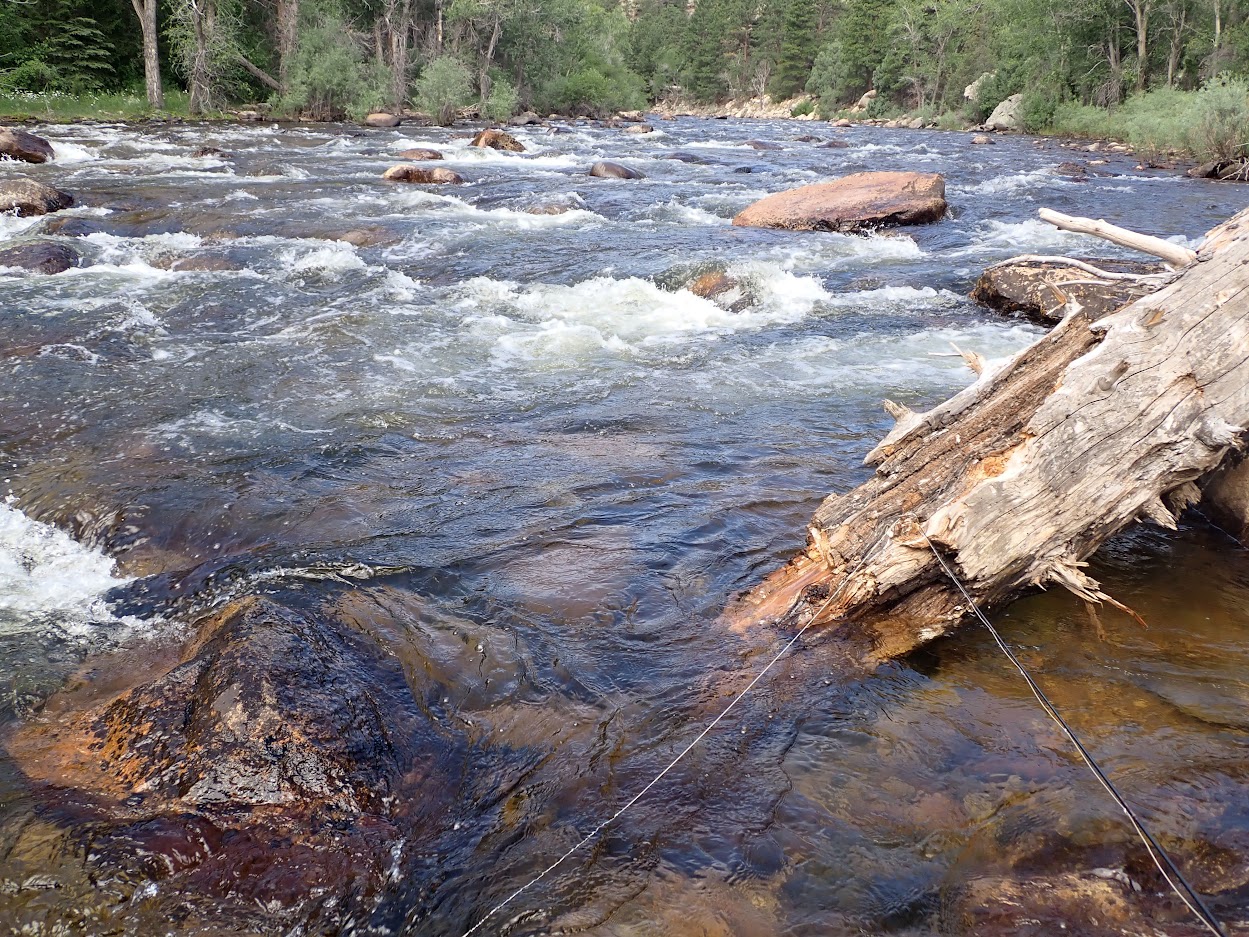 Of course it did not, and by 11:30AM the confident takes of the hair-wing disappeared, and fruitless casts suddenly became the norm. How could this happen? Perhaps a different version of my green drake would resurrect the hot fishing of the first hour? I exchanged the Harrop hair-wing for a parachute green drake and immediately notched my tenth fish, but then the fish once again refrained from gulping my artificial. My watch indicated that it was noon, and the heat was taking its toll on my energy level, so I found a nice flat rock next to a large spectacular pool and consumed my lunch. 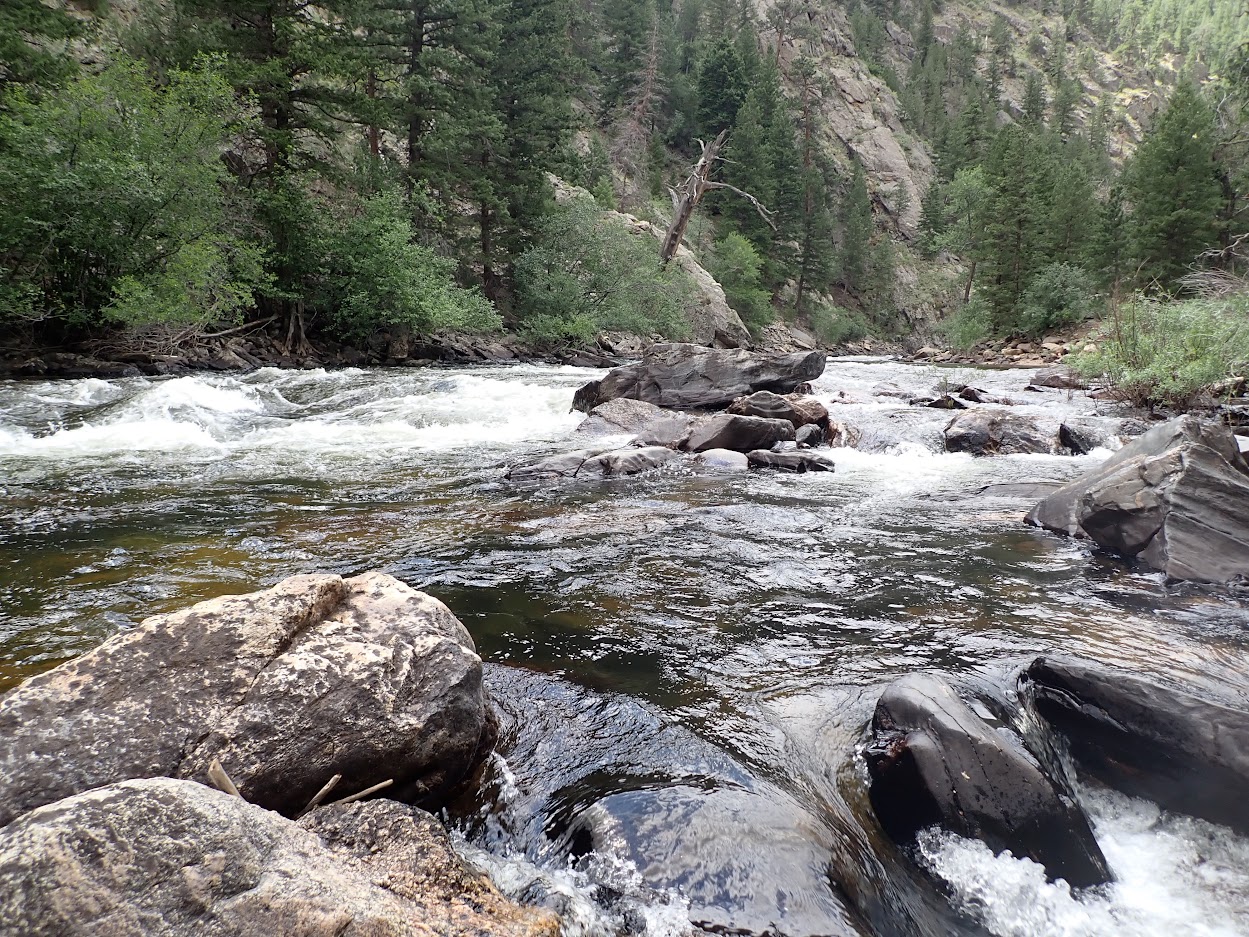 During lunch I observed carefully for insect activity, but the air was nearly devoid of life. I was baffled by why the trout would eat a green drake in the absence of a hatch between 10:30 and 11:30, but then suddenly show no interest? I decided to revert to my dependable dry/dropper method with a peacock hippie stomper, prince nymph, and salvation nymph. My thought process surmised that the hippie stomper might mimic a green drake, and the prince nymph was an approximation of a green drake nymph. The salvation covered the possibility of a pale morning dun hatch. The ploy paid off, and I elevated the fish count from ten to fifteen, as I progressed upstream along the right bank in the first hour after lunch. 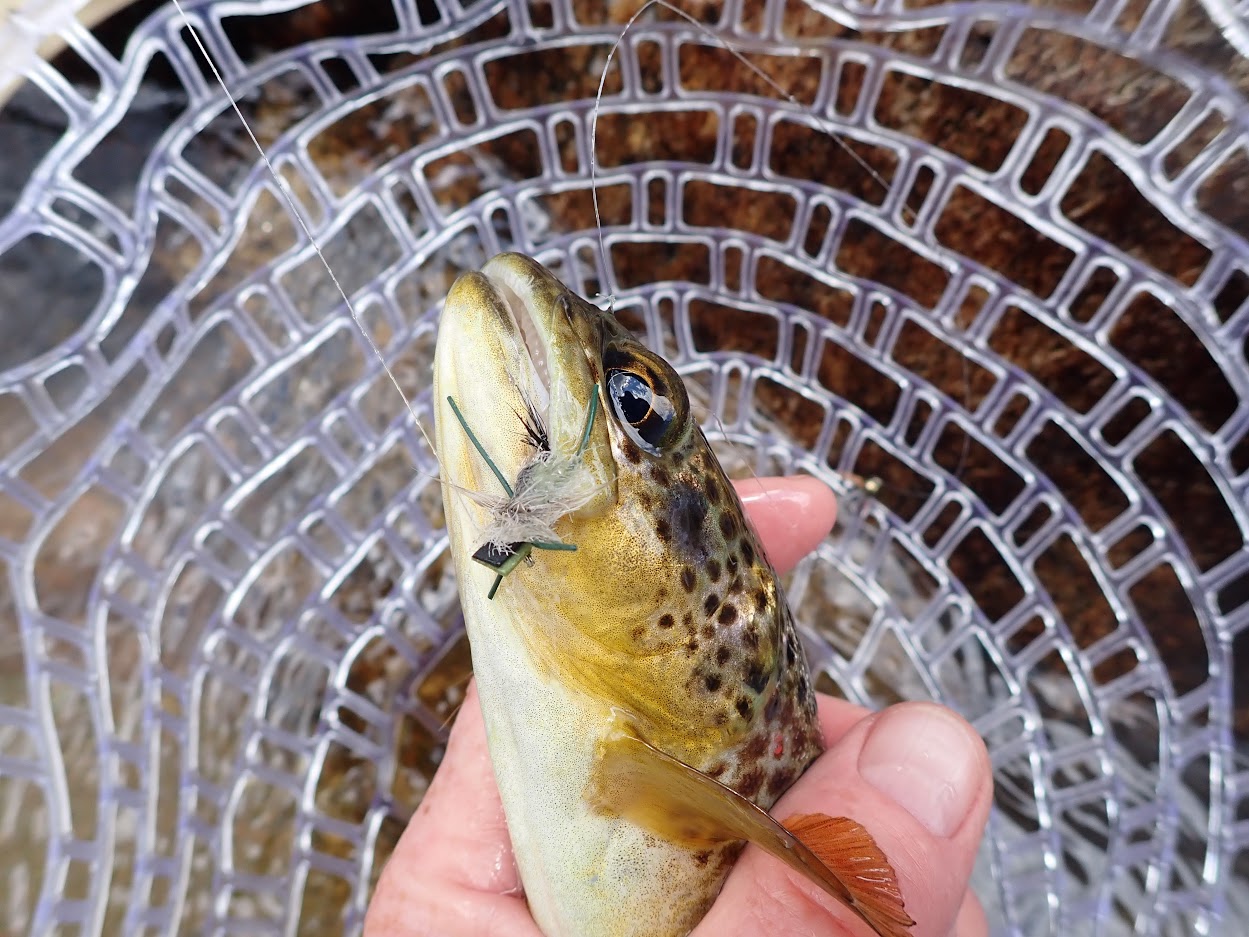 By one o’clock I actually witnessed five or six green drakes, as they slowly drifted above the river like a tiny hot air balloon. I was in a quandary. The dry/dropper was performing reasonably well, but the sighting of natural green drakes nudged me toward a return to dry flies. I ultimately decided to trade in the dry/dropper for a green drake comparadun. I reasoned that I wait all year for the opportunity to fish to green drakes, so why not take advantage? I knotted a size 14 green drake comparadun with a maroon thread rib to my line, and I began to flick casts to likely trout holding locations. 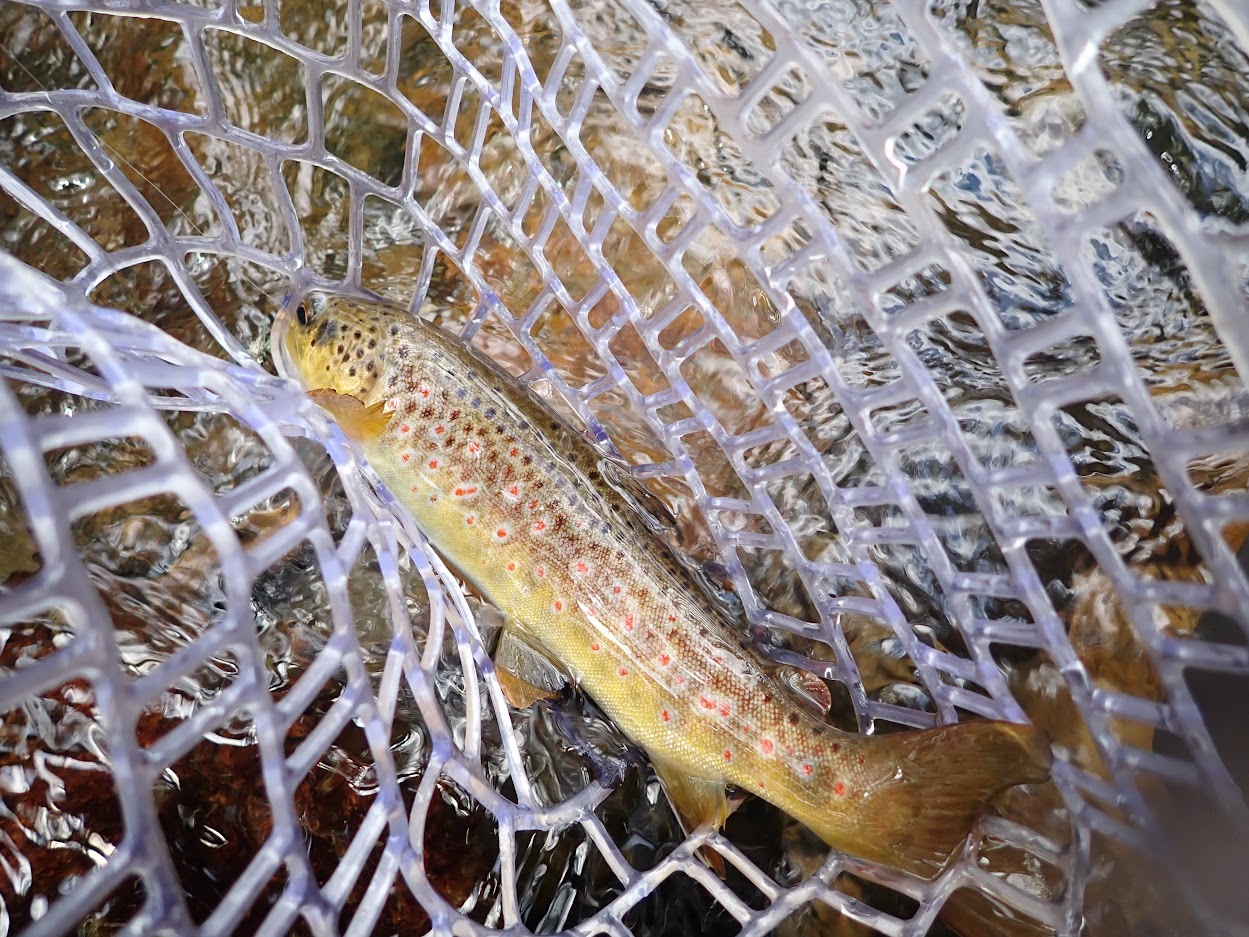 The tactic proved productive, and I incremented the fish count from fifteen to nineteen on the back of the comparadun. The trout were grabbing the low riding dry fly with confidence, and I was loving the rhythmic casting and periodic surprises, when a resident trout decided to ambush the western green drake. Unfortunately all good things must end, and suddenly the fish began to refuse the comparadun or ignore it completely. I covered several promising areas with no positive results, and the comparadun body absorbed water and began to sink, so I once again stripped in my fly to make a change. I suspected that the lull in my catch rate was more attributable to a sinking fly and inability to track, so I replaced the comparadun with a user friendly green drake. I tied a batch of user friendly green drakes during the winter between 2018 and 2019, but I experimented only briefly with the new green drake imitation. I decided to give it another try due to its buoyancy, and I was pleasantly surprised by the results. 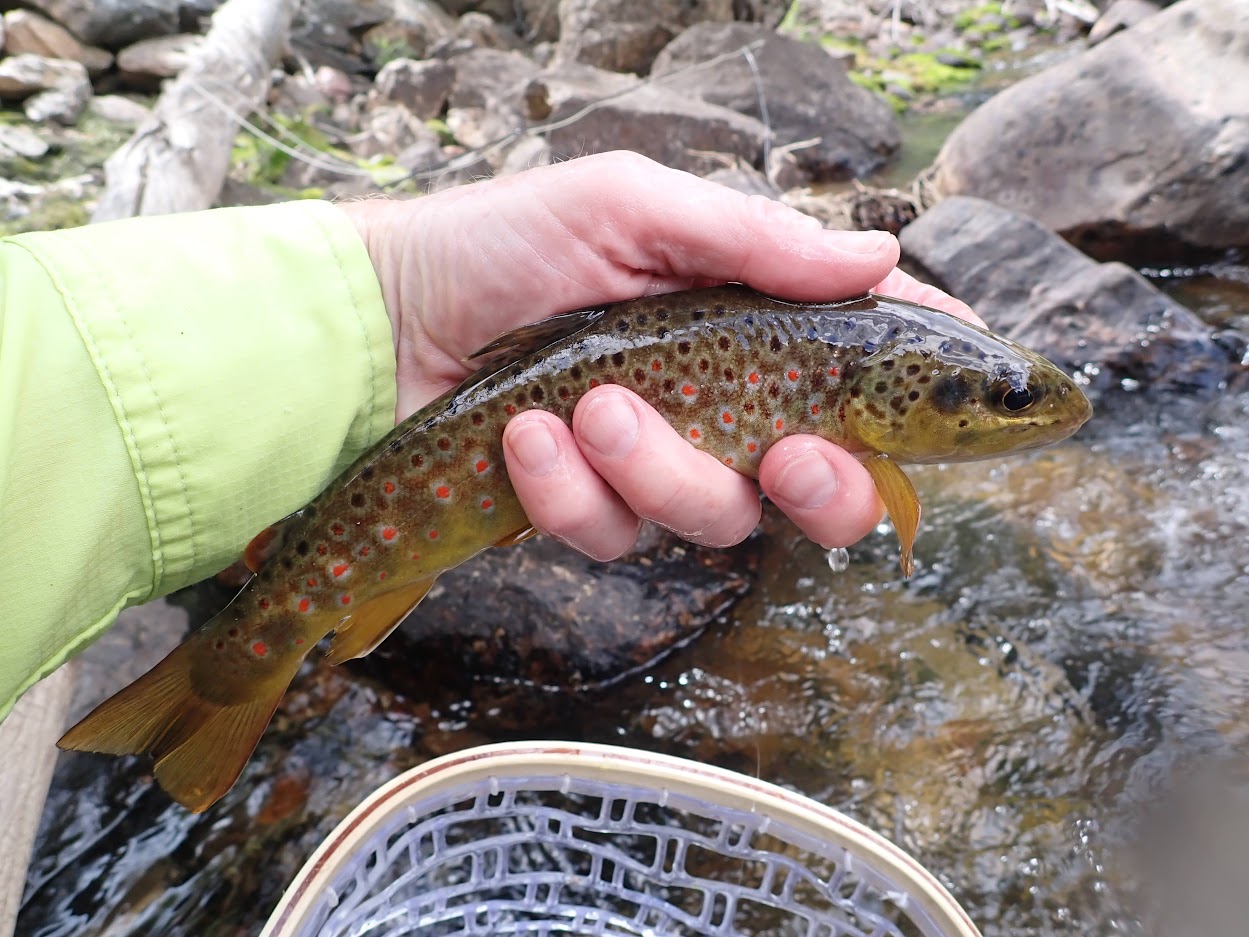 The green drake user friendly was not perfect, as it generated its share of refusals, but by the time I hooked it to my rod guide at 3:30, it was responsible for moving the fish count from nineteen to twenty-six. I never saw additional green drake naturals after one o’clock, so the user friendly productivity came in the time frame after the hatch was over. The foam enhanced dun with the white wing was a joy to track, and it apparently represented a desirable meal for the Cache la Poudre trout. 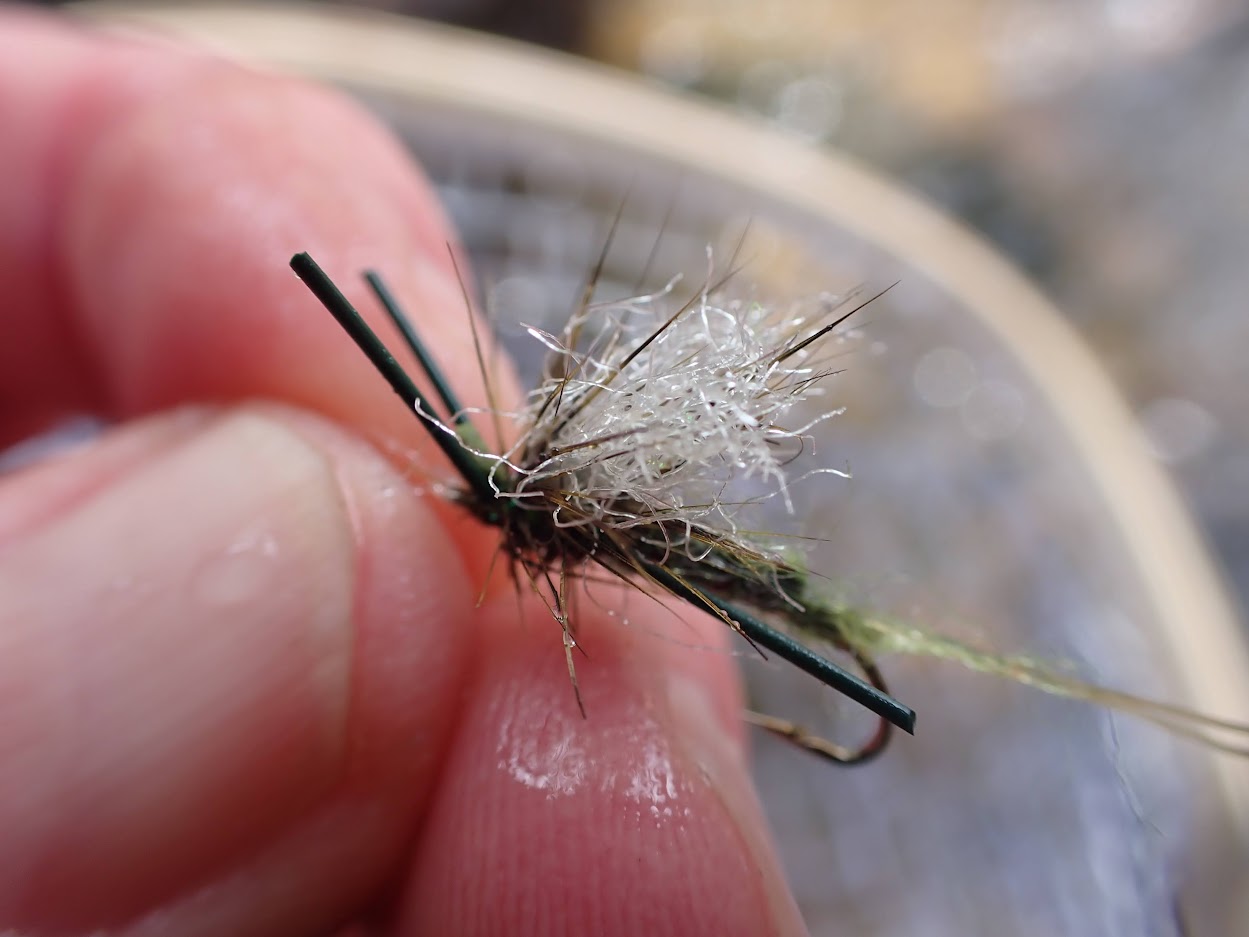 Friday, July 17 evolved into an outstanding day on the Cache la Poudre River. On my return drive through Fort Collins the dashboard thermometer registered 95 degrees, but I landed twenty-six trout in spite of the heatwave. My quest for green drake action was successful, as twenty-one of the twenty-six netted trout gobbled one of my array of western green drake imitations. The first ten confidently slurped the drake frauds, even though the hatch did not commence until one in the afternoon, and this confirmed my suspicion that trout have long memories when it comes to a sizable meal such as the western green drake. Do readers have suggestions on other Colorado freestones that offer excellent green drakes over the next week or two? I would seriously evaluate a trip.