Friday was all about chasing the green drake hatch. I am obsessed with the large western mayflies, and I knew from previous years, that the green drakes typically hatch throughout July on the Cache la Poudre. A 7/9/2020 fishing report from St. Peter’s Fly Shop in Fort Collins announced that the hatch was just around the corner, and that was the only impetus I needed to schedule a day trip to the scenic canyon west of Fort Collins. A disappointing day on the North Fork of St. Vrain Creek on Thursday added incentive to seek out another location for a day of July fishing. I remained undeterred in spite of a forecast high temperature in Denver of 100 degrees. It could not possibly be that warm in the canyon, could it?

I departed Denver by 7:50AM and this enabled me to arrive at a favorite pullout along CO 14 by 9:15AM. A slow moving RV was a temporary impediment to progress, but I slowed down and enjoyed the ride and remained in a positive mindset. As I pulled on my waders and assembled my Sage four weight, the temperature was a pleasant seventy-five degrees, and I concocted a back up plan in case it was too hot. I would return to the car for lunch and transfer into wet wading attire. 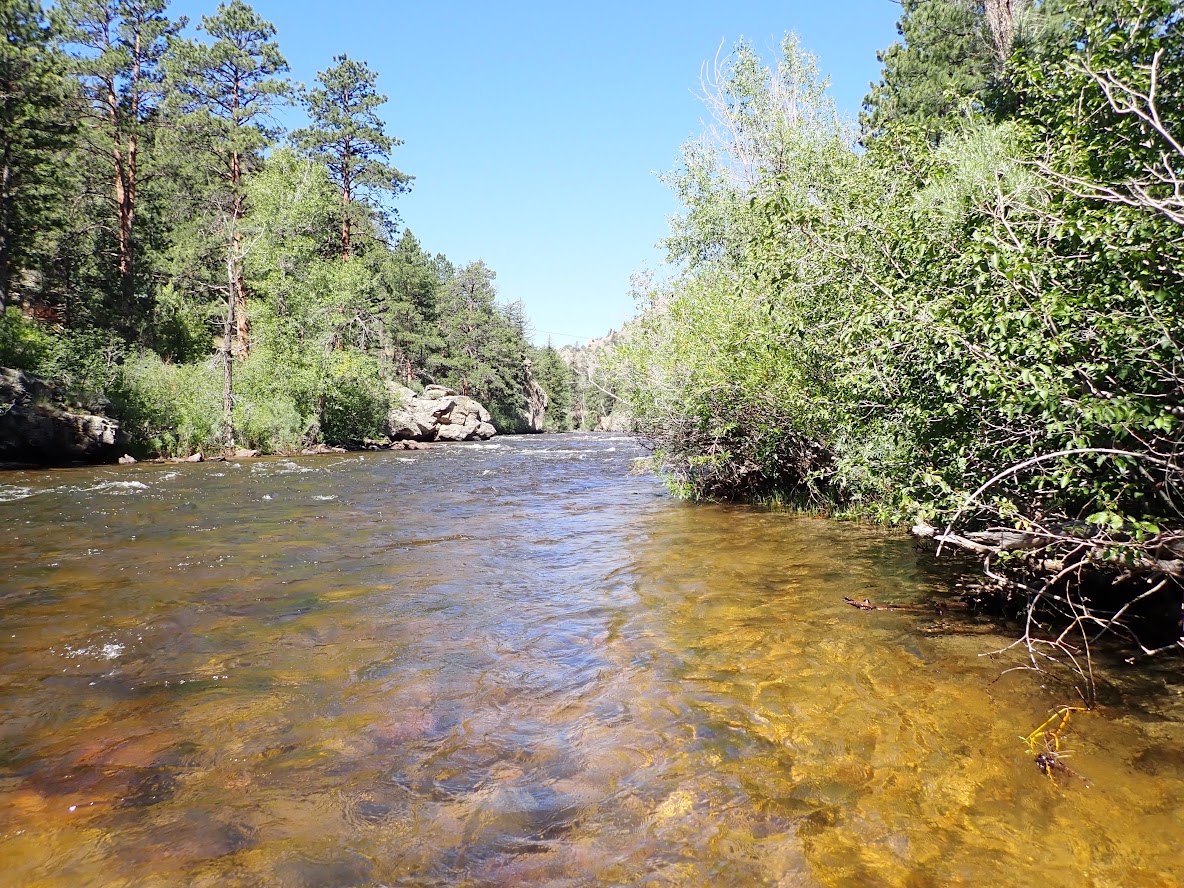 The condition of the river was spectacular. The flows were a bit high at 560 CFS, but I was actually pleased with the extra volume. The cold run off would push the trout to the river banks and help offset the high air temperature. I crossed the highway and entered the river and began fly fishing at 10:00AM. My starting lineup included a tan ice dub chubby Chernobyl, a green drake X leg nymph, and a salvation nymph. The green drake nymph was a new fly that I created during surgery recovery to imitate the western green drake nymph, and I utilized some dyed green Australian possum for the body. The salvation was intended to imitate the nymph stage of pale morning duns. 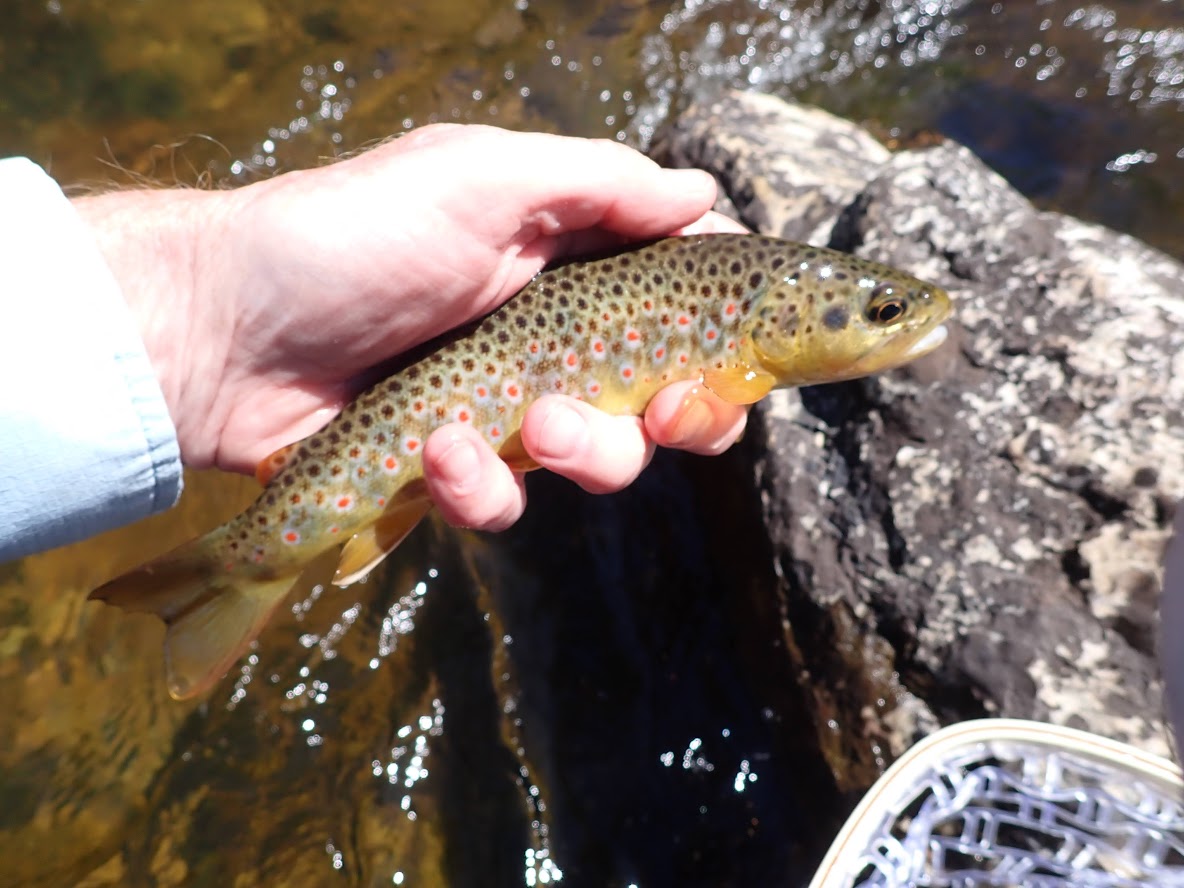 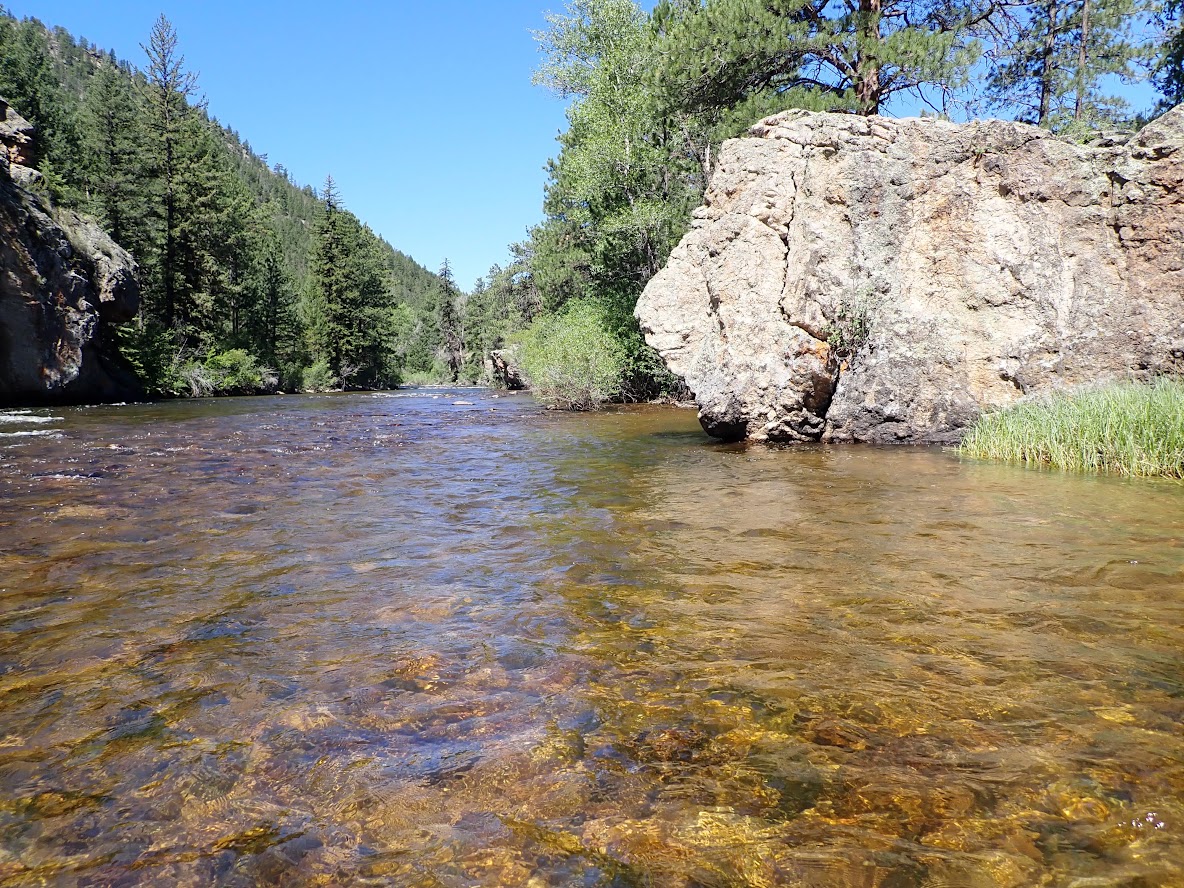 The Area Around the Large Rock Was Productive

In the first hour I landed four small brown trout. One trout consumed the X leg nymph, and the other three nabbed the salvation from the drift. Early on I discovered that the trout preferred fairly shallow runs and riffles next to the bank. Before this became apparent I wasted time casting to very attractive deeper runs and pockets that normally produced fish, but for some reason otherwise marginal lies were popular on this day early in the p0st-run off summer season. The catch rate was slower than expected in the first hour, and I knew from previous seasons that a prince nymph was an effective fly ahead of the western green drake hatch, In short, I was more confident in the prince’s fish catching ability, so I exchanged the X leg nymph for a size 12 prince. 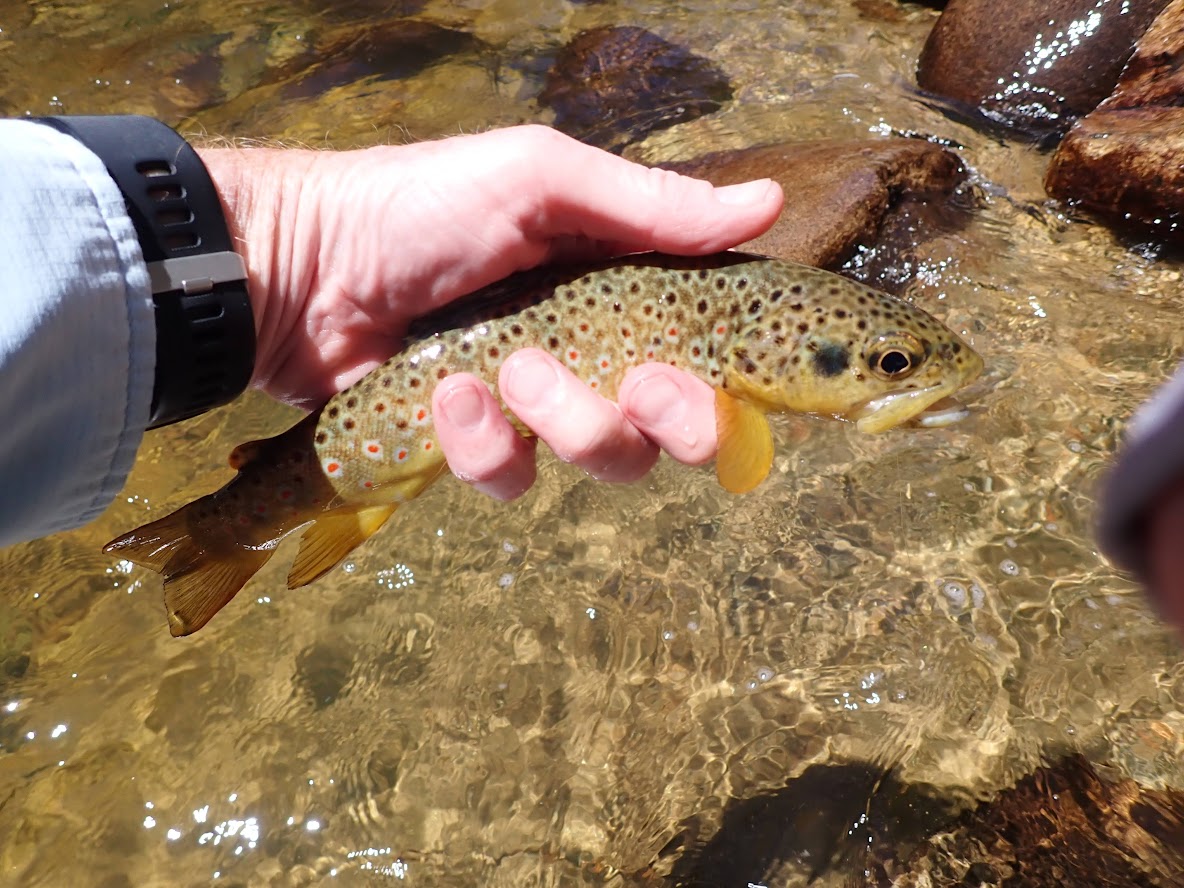 Between 11AM and 2PM I methodically worked my way upstream along the right bank and steadily incremented the fish count from four to twenty. 75% of the brown trout grabbed the salvation nymph, and 25% snatched the prince. These results included an abundant quantity of long distance releases, and I would characterize the action as lukewarm. The key to success was finding pockets and runs along the bank with a water depth of two feet. A carefully placed soft cast to these locations yielded frequent takes. I stopped for lunch at 12:15PM, and the fish count was paused at ten by that juncture. 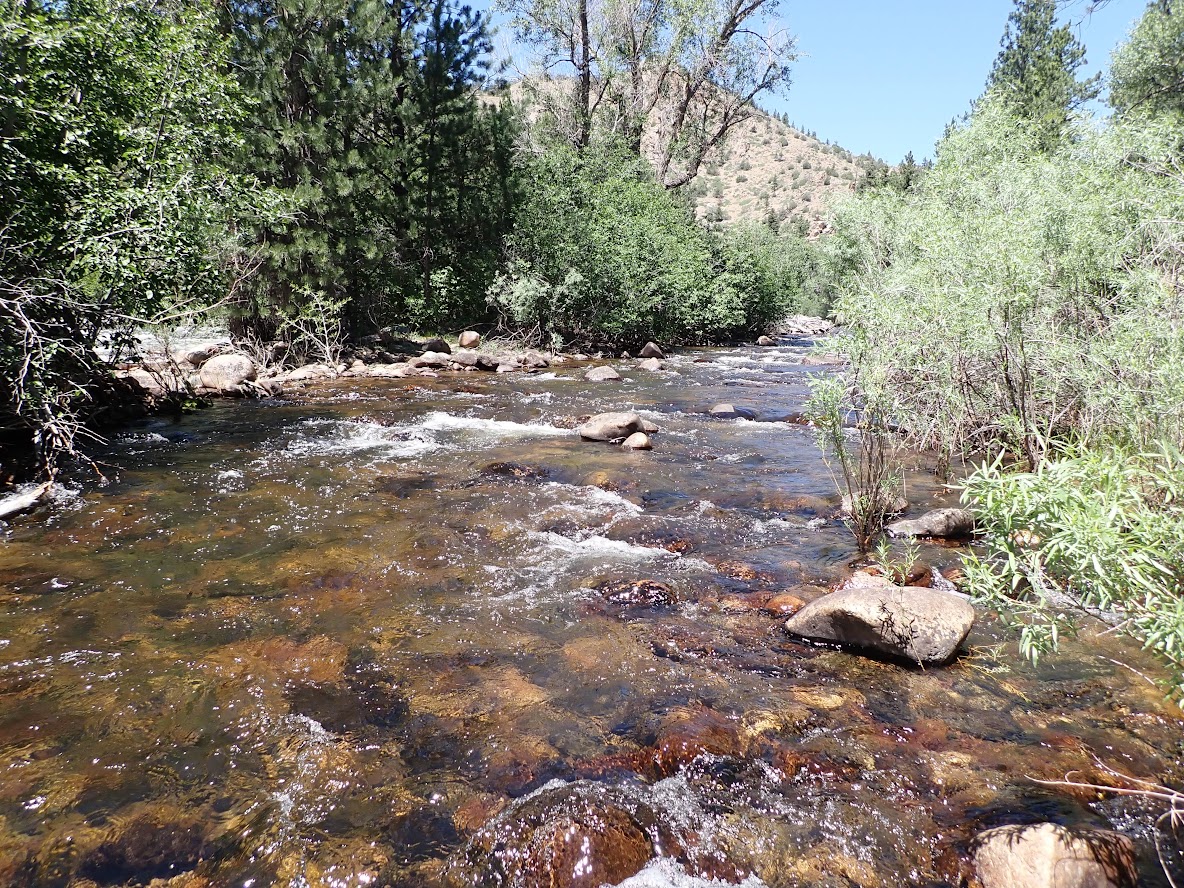 A Very Productive Side Channel 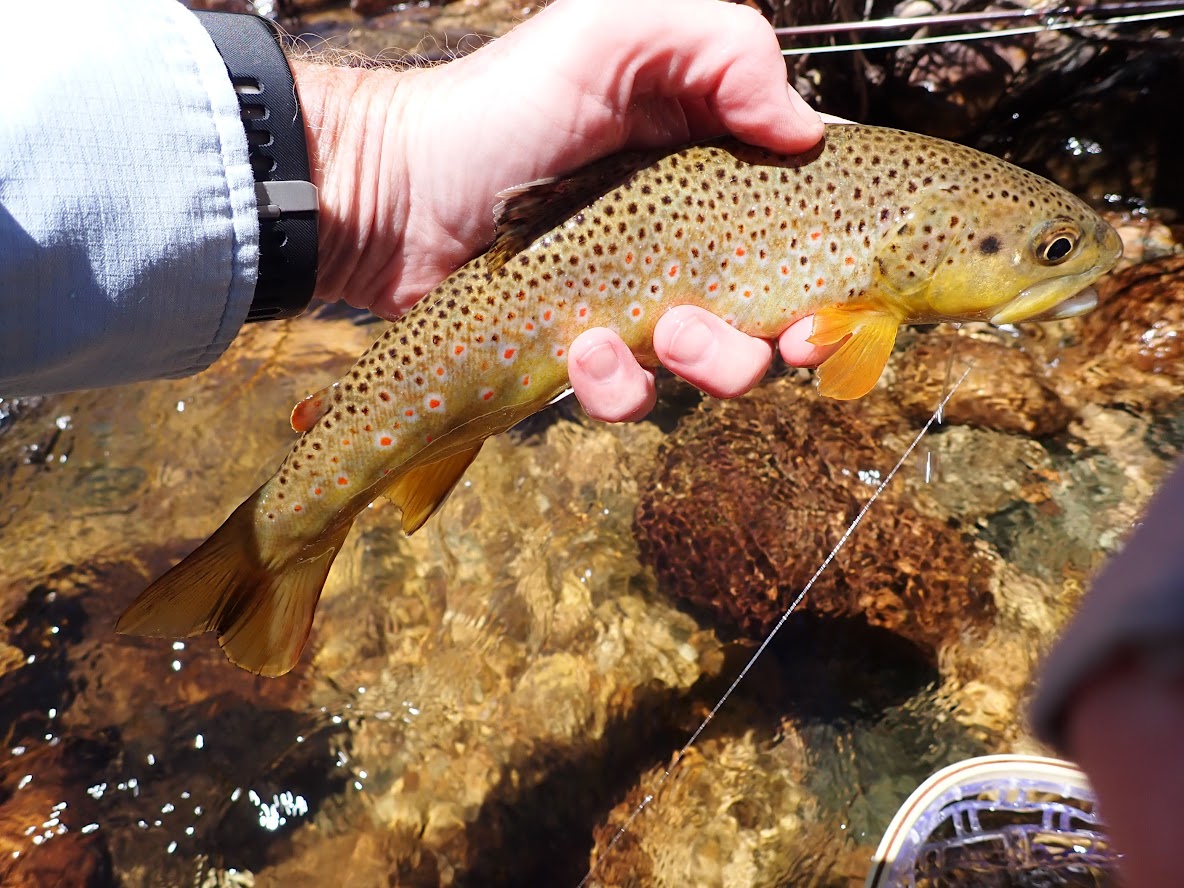 Just before 2PM I spotted three western green drakes, as they slowly glided upward from the river. In the absence of rises I continued with my high performance dry/dropper rig; however, I began to wonder if a size 14 green drake dry fly might inflict some damage on the local trout population. The third fluttering mayfly sealed the deal, and I snipped off the three fly dry/dropper configuration and replaced it with a size 14 parachute green drake. The changeover was magical, and a ten inch brown trout immediately gave me positive reinforcement, as it slashed the fresh dry fly aggressively. Between two o’clock and 2:30PM I tossed the green drake to likely spots and elevated the fish count to twenty-four, but then the trout wised up, and I began generating refusals or no response at all. 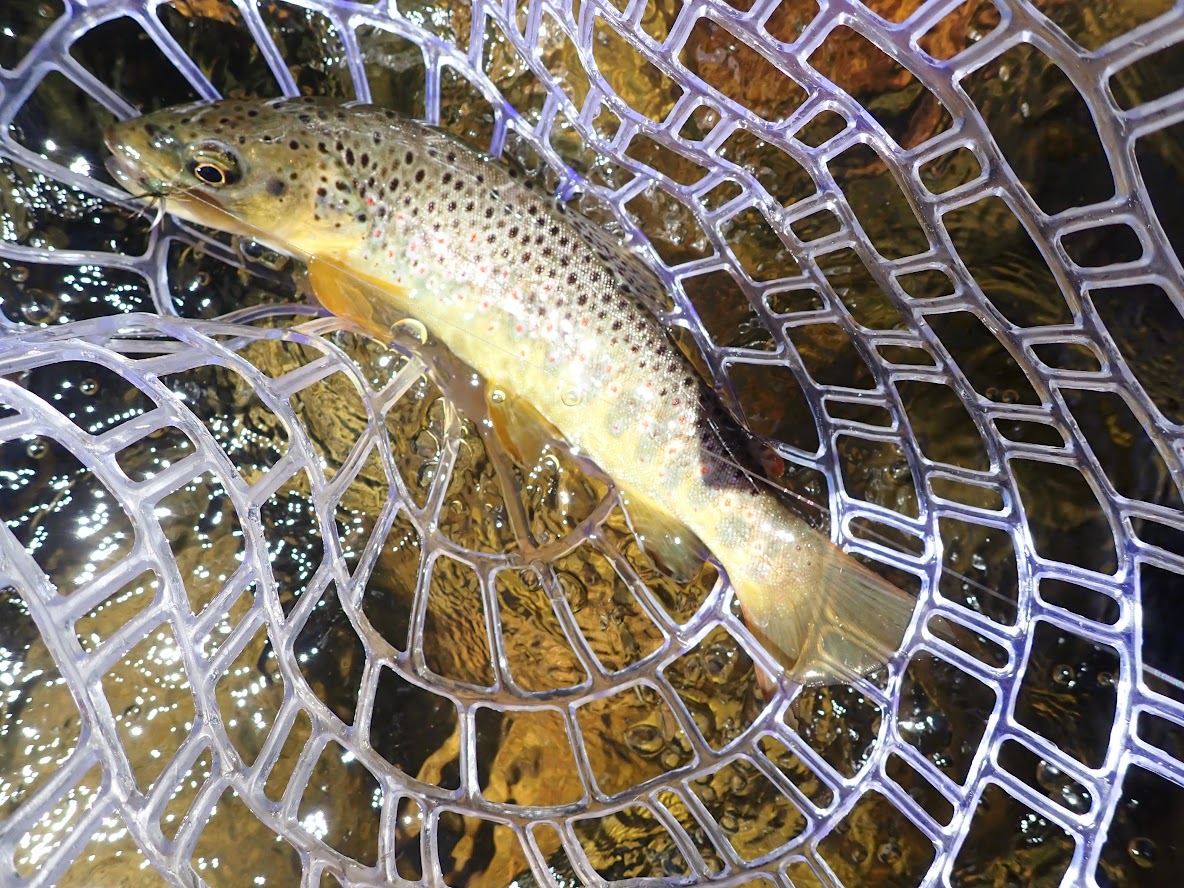 The water type shifted to deeper pockets and the green drake was very difficult to track, so I reverted to the same dry/dropper set up that gained me twenty fish earlier. Alas, the magic was gone, and the dry/dropper could not recapture the imagination of the Poudre fish. I suspect the heat was the main influence that caused mid-afternoon doldrums, as the dashboard registered 95 degrees, when I started the engine for my return drive. I hooked the salvation to the rod guide and hiked half a mile back to the car and made the two hour drive back to Denver. 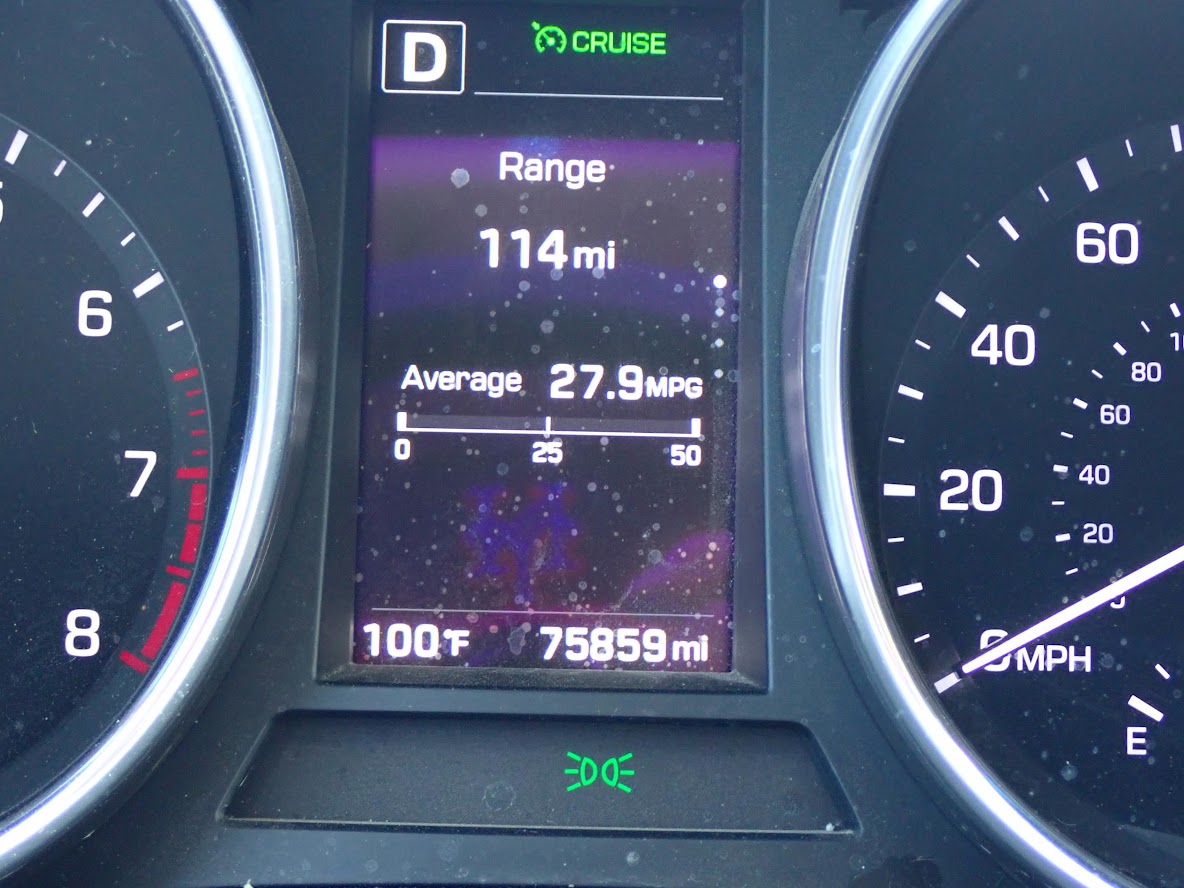 The largest fish to land in my net on Friday was a thirteen inch rainbow (the only rainbow of the day), and most of the brown trout were in the seven to eleven inch range, which is admittedly subpar, but the relatively fast action maintained my interest. I reveled in the challenge of reading the water to determine the preferred holding lies of the wild trout in the high water of the early season. Once I noted their preference, I targeted spots along the bank, and getting casts under branches and into small holding zones was a demanding endeavor. The western green drake “hatch” was icing on the cake, and I was pleased to determine that the Poudre trout were already tuned into the large olive mayflies. A return trip within the next two weeks seems like a likely scenario.