High expectations are a recipe for disappointing fly fishing. In reality my day on the Poudre on July 15 was a decent outing, but it suffered from comparisons to Thursday and the last five or six fishing trips of my summer tour.

The high point of Friday was not a fishing related experience. Jane and I explored a new hiking trail in the Red Feather Lakes area called Lady Moon Trail. We read a review of the trail on the Poudre Wilderness Volunteers web site, and the two thoughts that remained in our minds were “easy” and “horse pack trail”. As we completed our five mile round trip hike, we were pleasantly surprised that the trail was indeed relatively flat, but in addition we passed through a variety of landscapes ranging from pastures to aspen groves to fields of wildflowers to ponderosa pine and evergreen forests. I expected deep troughs from horse traffic and abundant horse excrement, but these worries were unfounded. I could hardly keep my eyes on the trail to ensure safe footing, since I was constantly gazing at the variety of colorful wildflowers.

By the time we returned from our hike, it was noon, and we were required to leave our campsite by one o’clock. Jane and I hustled and teamed up like camping professionals and beat the deadline by two minutes, I even had time to gobble my lunch before we pulled our loaded car out of the campground parking lot.

Because I enjoyed an outstanding day on Thursday in the restricted fishing area below the fish hatchery along the Cache la Poudre, I decided to visit another section on Friday. On our drive west from Rustic earlier in the morning I identified a section of faster water near the downstream border of the special regulation water, and this is where we parked. Jane pulled out her camp rocker and prepared to read, and I rigged my Sage four weight and slid down a steep bank to fish. Immediately I was greeted by a huge deep shelf pool below some large exposed boulders, and I carefully tied a size eight Chernobyl ant, beadhead hares ear, and salvation nymph to my line. By the time I began fishing it was 1PM, and this coincided with the beginning of the best period of fishing on Thursday. Needless to say I was excited to finally be on the water.

I began casting the dry/dropper to the current seam in the deep hole, but on the third cast I snagged something. I attempted some rudimentary tugs from various angles, but it became clear that one of the flies was severely wedged. I waded upstream and looked closer, and sure enough the flies were attached to an immovable object in front of a large submerged boulder. The water was fast and deep, and there was no way I could get close enough to attempt to use my wading stick to free the flies, so I pulled my line toward me in order to preserve my rod tip, and then I heard the ugly sound of my line popping. I reeled up the line and discovered that all three flies were missing along with several sections of tippet.

After shouting some curse words, which Jane unfortunately heard from her perch in the camp rocker, I sat on a rock and grieved. When I accepted that I lost the three flies that I spent ten minutes tying to my line, I began the long process of repeating the task. What a way to start my Friday fishing venture! I tied the exact same lineup of flies to my line, and after another ten frustrating minutes, I was back on the water. I skipped the deep shelf pool to avoid additional snags, and began my upstream migration. 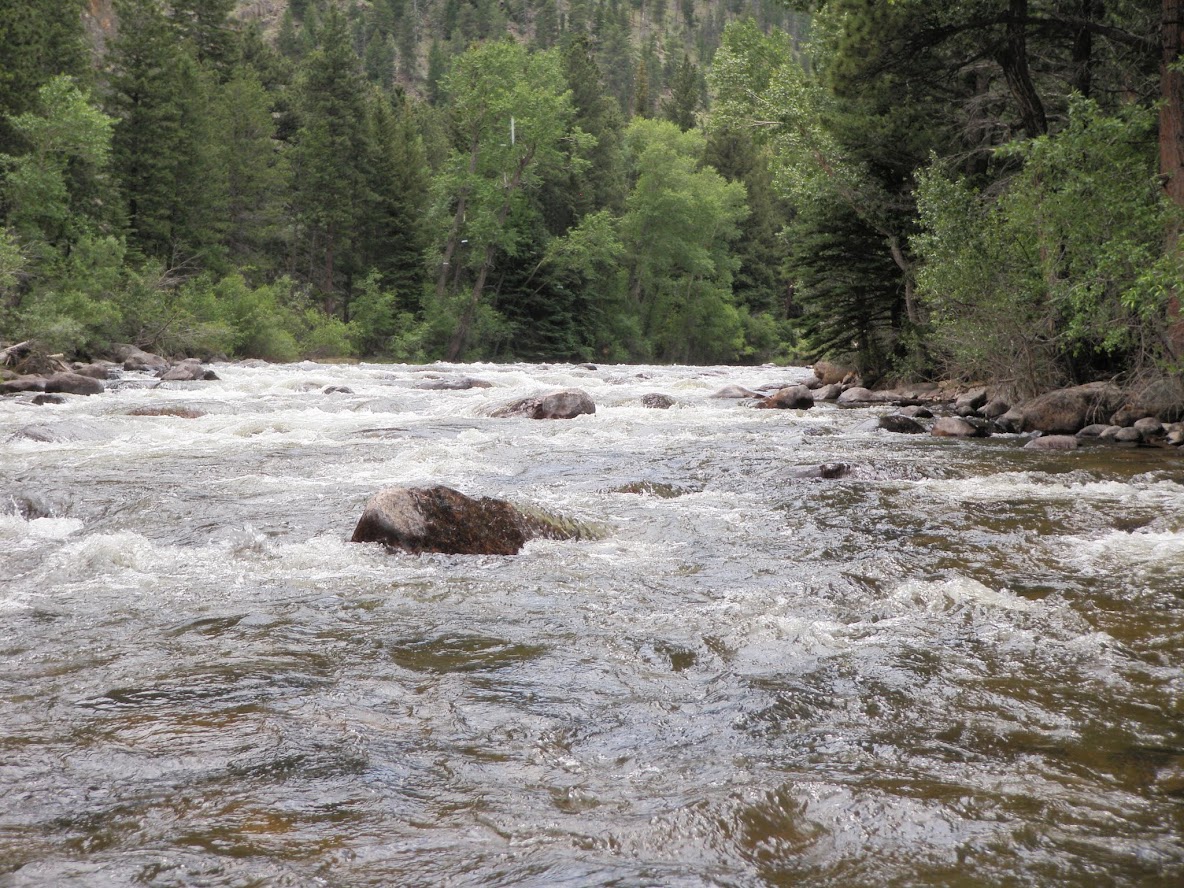 Friday was another warm day with temperatures peaking in the low eighties. The river level was similar to Thursday with high early summer flows that limited fishing to the edge except for sections that were wide and exhibited lower gradient. For the first hour I fished the pocket water along the edge and netted four brown trout. All were relatively small and all attacked the salvation nymph except for one gullible brown that slurped the Chernobyl ant. 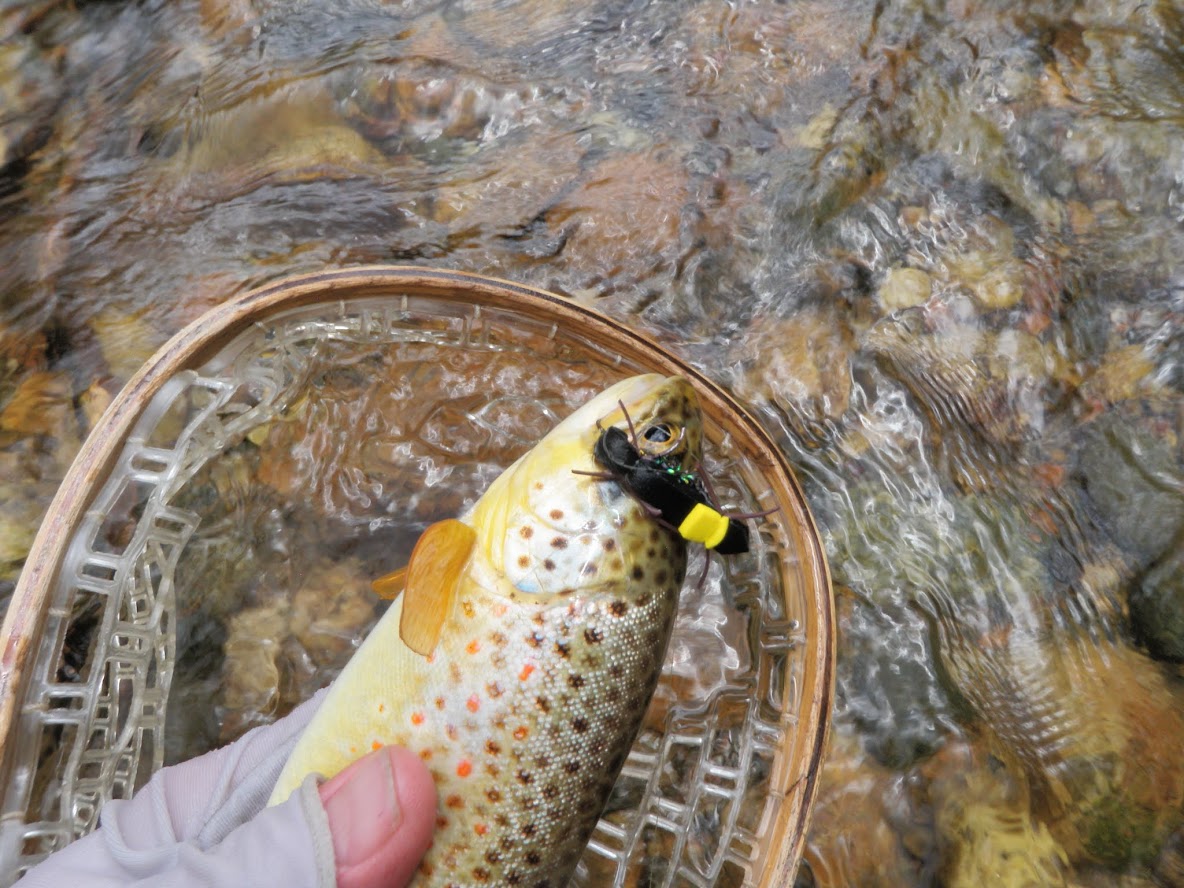 As I was working my way upstream some dark clouds moved in from the west, and the wind kicked up. The low light and wind made fishing a challenge, and it was at this time that I spotted several large mayflies, as they floated from the surface of the river like a rising hot air balloon. The mayflies were obviously green drakes, and I was not setting the world on fire with the dry/dropper combination, so I converted to a Harrop deer hair green drake. July was after all the green drake tour.

Over the course of the next hour I landed four 9-12 inch brown trout that smacked the green drake. In addition I experienced three long distance releases, a foul hooked fish, and three or four refusals. On the one hand I was pleased to encounter a very sparse green drake hatch and successfully fool some fish with my imitation, but I was also frustrated by the refusals and temporary hook ups. My imitation was close to what the fish were looking for, but apparently differed in some significant way. In these situations I always challenge and analyze me approach, and on Friday I regret not experimenting with different versions of  green drake dry flies. In hindsight I also question whether I would have been better off sticking to the dry/dropper approach, since it was highly effective the previous day. 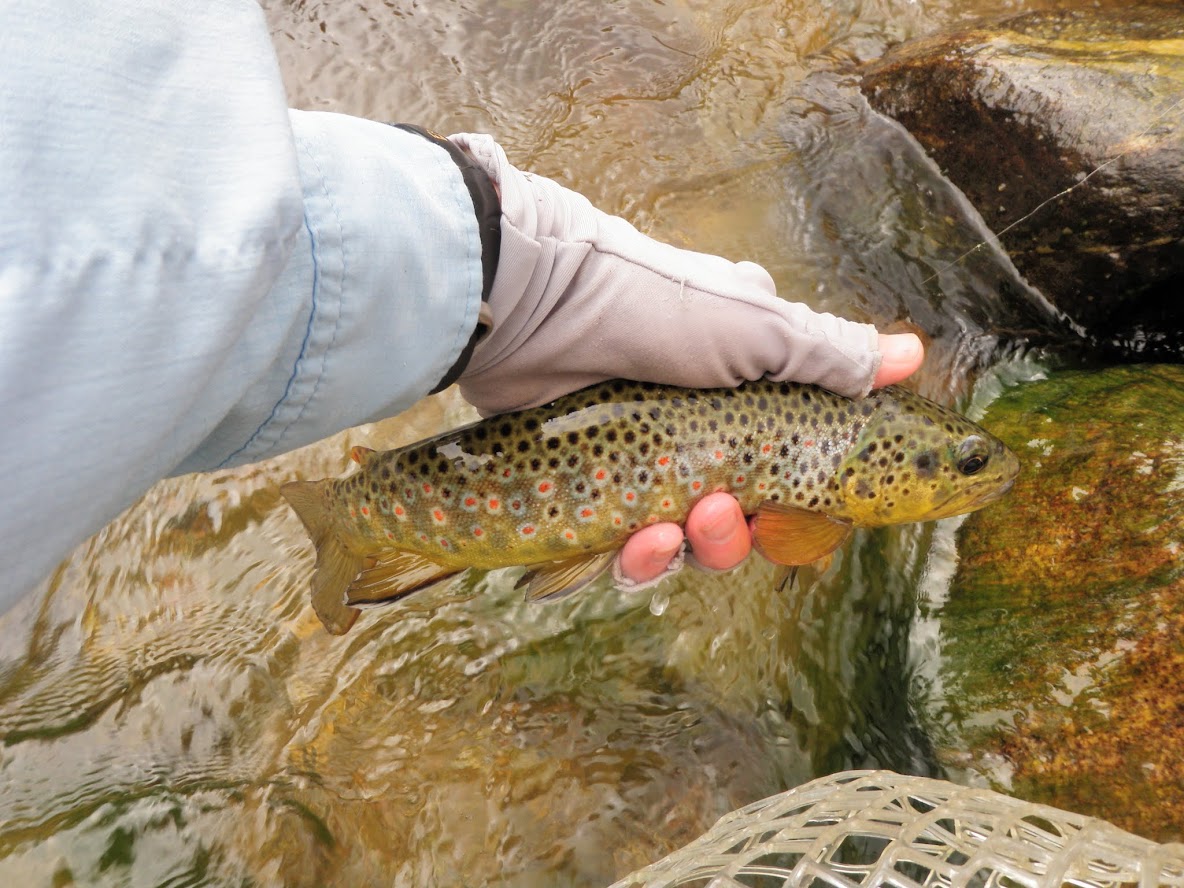 Best Fish on the Day

During the last half hour of fishing I reverted to the dry/dropper presentation, and I landed one more small brown trout to bring my fish count to nine. Nine fish in 2.5 hours of fishing is actually a decent catch rate, but I was comparing my day to Thursday, when I landed twenty-one fish in 3.5 hours. As I reflect on my day, I suggest several factors that perhaps explain my reduced catch rate. Utilizing the green drake versus the dry/dropper configuration is the first and most obvious. Generally subsurface  offerings produce more fish, but I could not dismiss the allure of fishing a large green drake on the surface.

The section of the river that I chose to fish was also a factor. On Thursday I fished the edge on a stretch of the river that was fast moving, but the gradient was not as extreme as Friday. On Friday there were many portions where the river was churning and kicking up whitewater, and the high velocity extended to the bank, thus offering fewer deep pockets and runs for me to prospect. I spent much more time scrambling over rocks and skipping marginal water. The cardinal rule of fishing is, “You cannot catch fish if your fly is not on the water:” 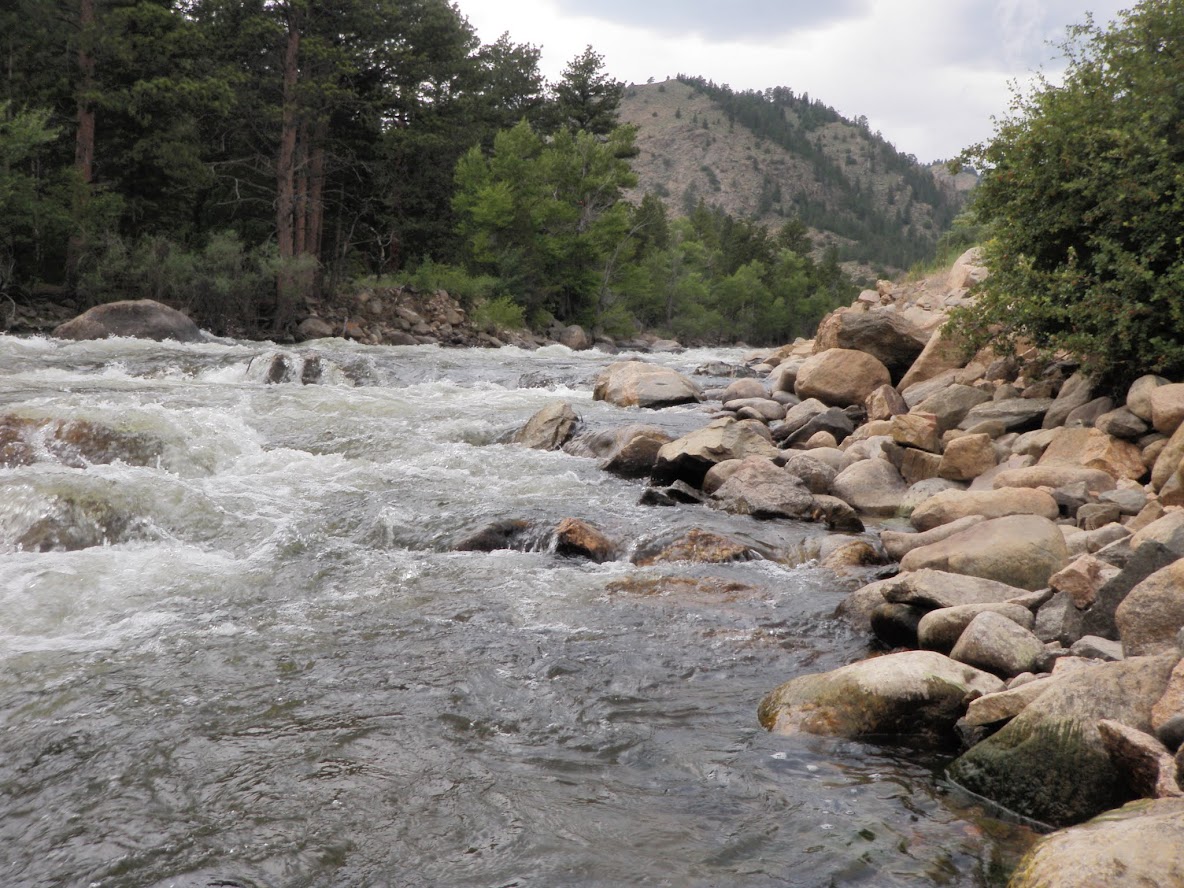 The last variable was the weather. The wind impacted my casting efficiency causing me to make multiple casts to adjust, whereas, on Thursday one toss may have been sufficient. The wind also caused some tangles, as I was casting backhanded for most of the time. The overcast sky was another weather related factor, as the low light made following my flies difficult, particularly the olive and gray toned green drake. The difficult visibility may also help explain the lost fish and refusals.

As I returned to the car to meet Jane, I was frustrated with my day, but now that I reflected and chronicled the sequence, I realize that it was an average outing. Even the size of the fish was likely normal for the Cache la Poudre based on what I read in the guide books. The green drake tour will continue on Sunday when I make the annual trek to the Conejos River. It will be difficult to contain expectations for this trip, but I will do my best.