Dave G. called the landowners of a private stretch of Brush Creek and obtained permission to fish through it on Saturday, so that was part of our gameplan. Dave suggested that we fish Brush Creek from the Eagle Ranch Road bridge upstream to the southern end of the Eagle Ranch property in the morning, and then fish the private water in the evening, and I readily agreed to the plan. After a hearty breakfast with Beth and Jane, Dave and I prepared to fish, and Beth drove us to the bridge where we began fishing. We once again employed the hopscotching method and built cairns to denote where the upstream fisherman entered the water.

I began fishing the water closest to the bridge while Dave changed his flies from the previous outing. I decided to go with my standard starting pair of flies, a yellow Letort hopper with a beadhead hares ear nymph. I didn’t have any luck in the first short run so I moved up to a nice ten foot long pool. On the first cast I witnessed a refusal from a small fish and then on the second cast my trailing nymph snagged on a submerged stick. I waded into the pool to free my fly and disturbed it, so I moved on to the next stretch. This was very attractive water with a long 25 foot pool and the main current flowing along the grassy left bank.

I began casting to the lower part of the pool where it tailed out but didn’t have any luck, so I moved up a bit and was standing at the very bottom of the pool. I shot a few casts up higher in the slack water to the right of the current and again had no reaction. However on perhaps the third cast closer to the edge of the current a huge head appeared which engulfed my fly. I set the hook thinking the fish had taken the hopper, and the fish immediately arched above the water so I could see it was a nice football shaped brown. Next the brown shot to the left and headed for the undercut bank. I continued to apply side pressure and moved it away from the bank. By now Dave G. had come up behind me and was watching the ensuing battle. The brown kept trying to go under the bank, and I kept guiding it back out. After three or four of these episodes, the brown made an upstream run and then quickly stopped. I frantically reeled up line to maintain tension as I worked the fish back toward me, and then the torpedo shot by me and went five feet below. I could see by now that the fly was in the brown trout’s mouth. I pivoted around and worked the tiring fish back above me a bit and guided it up on some exposed midstream rocks and then slid the net underneath. I now noticed that the beadhead hares ear was lodged in the corner of the mouth. Dave G. hypothesized that the brown turned away from the hopper and grabbed the nymph on the downturn. Dave G. graciously snapped a nice photo of me holding my prize trout, and I returned it to Brush Creek to grow and be caught again. 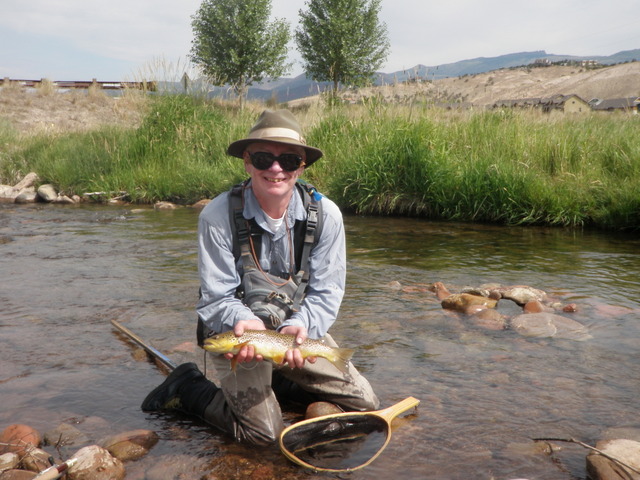 Dave with Catch of the Weekend – 16 Inch Brown

Shortly after this experience I landed a twelve inch brown on the beadhead hares ear in a similar spot along a current seam near the left bank. I’d caught two fish within the first half hour, so I was feeling pretty optimistic about the remainder of the day. Alas, the action slowed considerably. I continued fishing and hopscotching for the next hour or so with no action. Dave G. meanwhile was picking up three or four twelve inch fish. Finally close to noon I hooked and landed a pair of seven inch browns, but then it became dead again. Much of the stream was shaded by cottonwood trees, but there were some long open stretches. The sun was now quite high in the sky and very intense, and I was perspiring as I walked the bank from pool to pool. 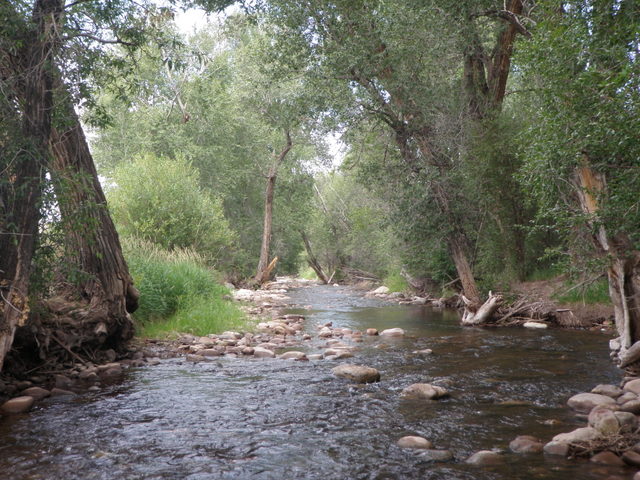 When we reached another bridge, I asked Dave G. if we should quit. He had likewise experienced a long period of inactivity, so he decided to cast to a nice spot above the bridge and then we would adjourn to the house. I pulled out my camera and snapped a few photos of Dave working the stream, and then Dave G. called Beth on his mobile phone. We waited only ten minutes or so on a bench on a small corner park in the shade before Beth arrived and taxied us back to the house. 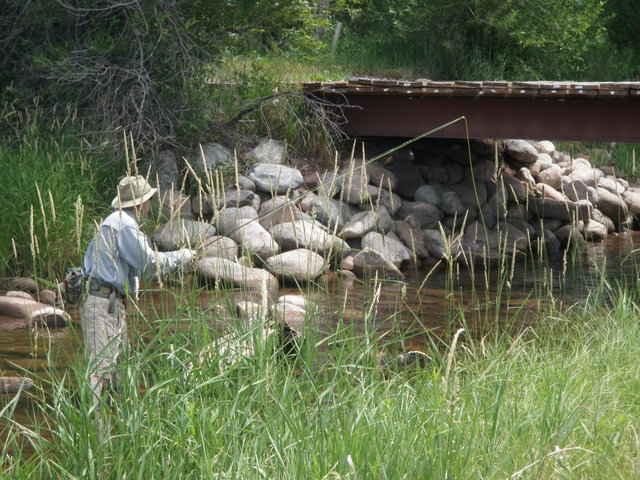 Some rain clouds moved in after lunch but we managed to enjoy a nice bike ride between 4 and 5PM. After the bike ride, Dave and I grabbed our rods and walked down the bike path to the stream above the first bridge to the visitor center and near a high cut bank. We began fishing the stretch of water next to a long undercut bank where I’d had great fun in July 2010, but I was unable to pound up any action. I had replaced the yellow Letort hopper with a Chernobyl ant and reattached the beadhead hares ear. Dave waited while I fished this usually productive stretch as he was certain I would need his services for photography. Unfortunately photo opportunities did not materialize and we moved on.

Not far from this starting point I ducked under a barbed wire fence running over the stream, and now we were both fishing the private water. Brush Creek makes numerous bends as it winds through this private land creating nice pools and runs in the process. We continued to leap frog over each other, but we did short stretches, therefore, no longer requiring the cairn building exercies. I spotted several rises so I switched to a bushy caddis and this prompted a smug refusal. Perhaps the fly was too large? I clipped it off and replaced it with a size 16 deer hair caddis with a light gray body. Sure enough when I placed the smaller imitation over the spot of the rise, I hooked and landed a twelve inch brown.

As we moved along, the sky remained overcast and I was certain we’d experience some fast action on the surface. At one point Dave G. wasn’t having much luck with the beadhead hares ear so he asked me what might be a good sufsurface fly to use as a dropper. He had showed me a box with numerous caddis pupa and larva flies on Friday so I suggested he try one of them since there were caddis present. This ended up being a great recommendation and Dave experienced some great action on the caddis pupa dropper including a 17 inch brown. The caddis pupa had a light olive body with a black thorax and white legs protruding from each side behind the head.

Meanwhile I spotted a rise at the very top of a run and close to the bank. I could see the side of the fish and it appeared to be a decent fish. I slowly moved closer and popped a cast a foot or two downstream from the location of the rise and immediately a twelve inch brown inhaled my fly. I quickly played it to my net and released. Was that the fish I observed? Perhaps I overestimated its size, but I decided to shoot another cast higher and above where I’d seen the fish. On the second cast a fish burst through the surface and grabbed my caddis dry. This fish felt heavier than the previous, but not as large as the 16 inch brown of the morning, as it shot downstream along the bank and then made a quick lateral move to go underneath. I held on and in a split second my line came flying back toward me with no flies attached.

The sudden force of turning had caused my surgeon’s knot that attached the tippet to the tapered leader to break. Dave G. had once again come up behind me and witnessed this dose of misfortune. I tied on another deer hair caddis and moved on but had only one more momentary hookup below some large beaver dams before arriving at the bridge where we’d begun our morning fishing. Dave G. continued to have decent success with his caddis pupa, but I was too stubborn to listen to my own advice and stuck with the dry fly under the mistaken assumption that a hatch would materialize.

It was 7:30 when we reached the bridge so we called Beth for another pickup and returned to the house for dinner.