Dave G. called and reserved the stretch of private water for Saturday so we made plans to fish in Brush Creek for a second day, and why not with the excellent results experienced on Friday evening?

After breakfast Dave, Beth, Jane and I drove to Sylvan Lake State Park and explored the lake and adjacent campground. Jane and I had never been there so we hiked around the lake and then returned to the Gaboury’s house and grabbed some lunch. After lunch Dave G. and I put our waders on and geared up to fish the private water of Brush Creek. I took my phone along in a zip lock bag so I could call Jane or Beth for a pick up once we completed our afternoon fishing stint.

We began fishing just west of the private water and Dave G. was immediately into several fish. I began with the Chernobyl ant and beadhead hares ear and stayed with this combination the entire two hours we fished in the afternoon except for a brief period when I switched the hares ear for an emerald beadhead caddis pupa. The caddis pupa actually yielded a 14 inch brown, but Dave G. continued to have success with the hares ear so I reverted back to that productive fly. In the two hours we fished in the afternoon I landed 14 brown trout with two rising for the Chernobyl, one hitting the caddis pupa, and the remainder grabbing the trailing hares ear.

At one point I was walking through a muddy area on a high bank cautiously planting my feet so I would not slide. It appeared that beavers had been working this area as there were shallow troughs that connected the marshy field to the stream. As I stepped into one of the deeper channels I noticed movement and stared down to discover a trout in the one foot deep puddle. I waited for the muddy water created by my footstep to clear a bit and then was able to see a brown trout in excess of 15 inches. I reached down with my right hand and grabbed the brown and pushed it into my net and then walked to the rim of the high bank and released it into a nice large pool that Dave G. had already fished through. Why was this nice large brown landlocked in a tiny one foot deep trench? My only theory is that it ventured from the stream on a side channel created by beavers when the water was high due to run off and then the stream level dropped quickly leaving my friend landlocked. I felt good about returning this nice fish to Brush Creek and hopefully it will live to be caught and released by other fishermen in the future. 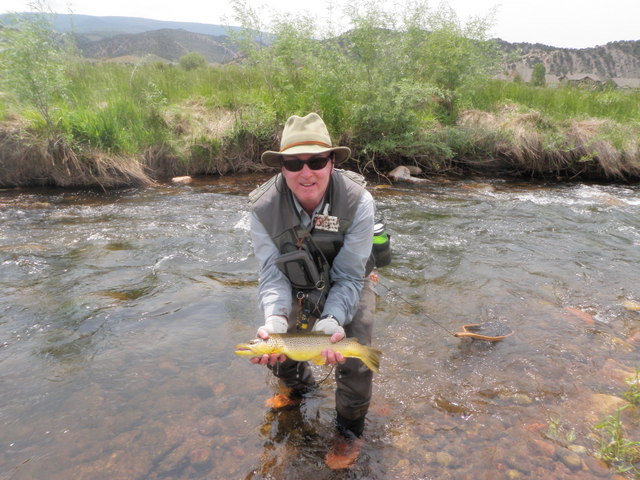 Dave G and His Fine Catch

The highlight of the afternoon was a 17 inch brown that grabbed the hares ear near the top of a run. The large fish immediately dove and shook its head then made a couple hard but short spurts downstream and back up until I scooped it into my net. Dave G. snapped some nice photos before I gently released the healthy brown back into the cold currents. Just prior to my highlight Dave G. landed a bright yellow 18 inch wild brown, and I was able to record some video and capture some nice fin and grin shots of Dave and his prize catch. 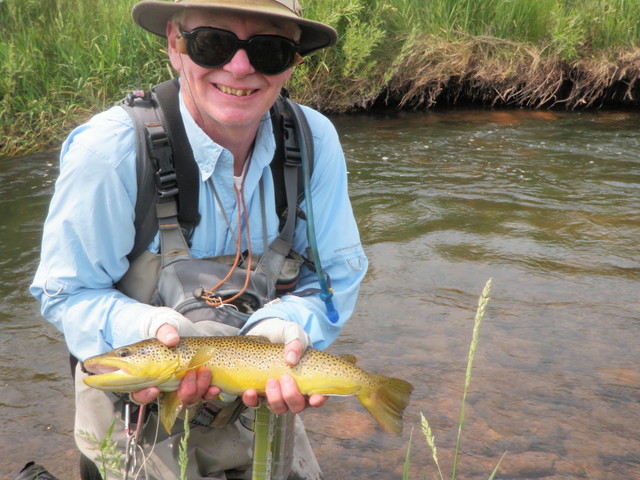 Dave W with His 17 Inch Brown

When we reached Sylvan Lake Road I called Jane and Beth for taxi service, and we waited only a few minutes before our ride appeared. Once again I took a late afternoon bike ride with Beth and Jane and upon my return, Dave G. and I prepared to fish again. We asked to be dropped off at the very same spot as the morning and covered the same private water and Eagle Ranch public water to the east. I once again began with the Chernobyl ant and hares ear, but after covering two attractive stretches with no results decided to switch to a dark olive deer hair caddis. This was partially prompted by my spotting a nice rise along a juicy deep run.

Initially I received a few refusals to the caddis, but then I noticed a couple little yellow sallies fluttering up from the water and added a yellow sally as a second dry fly below the caddis. I moved on and began receiving refusals to the yellow sally, but I stuck with the combination and eventually had a hot streak where I caught four on the caddis in short order. At this point I began to overanalyze. Dave G. switched from dry/dropper to a royal wulff and began to catch fish with regularity. I remembered using a royal stimulator on Brush Creek in the evening with great success, so I clipped off my two flies and tied on a royal stimulator. This brought me nothing but refusals, so I added the caddis that had produced as a second fly behind the stimulator.

I somehow managed to catch a small fish on the caddis, but more often than not, the fish were focusing on the royal stimulator that passed over them first and refusing it. I decided to join Dave and sorted through one of my boxes and found a royal wulff and tied it on. Almost immediately I landed a small brown, but this success quickly gave way to refusals. As the daylight waned, I removed my sunglasses and put on my regular lenses and pulled my headlamp on to my head. For some reason I clung to the idea that the royal stimulator would produce in the low light and I returned to it as my only fly. Of course it failed to hook any fish and before long it was 8:30 and we called for our rides and returned home for dinner. I’ll never know if sticking to the subsurface approach would have outproduced the dry flies.

It was still another great day on Brush Creek with 20 total fish landed including several in the 15 to 17 inch range.