With a high of 65 degrees forecast for Denver on Sunday, November 10, 2019 I could not resist the siren call of Boulder Creek. Boulder Creek within the City of Denver is one of my favorite destinations in late November, as it remains milder than the streams in the foothills and those at high elevation.

I departed my house in Denver at 10:40AM on Sunday morning, and this enabled me to arrive in Boulder across from the stream by 11:15AM. My normal parking space at Scott Carpenter Park was off limits, as the parking lot was fenced off for some sort of construction project. This forced me to reverse my direction on 30th Street, and after I crossed the bridge over Boulder Creek, I made a left and parked in a CU parking lot next to some greenhouses. The lot was empty, and signs warned against parking without a permit on Monday through Friday. An advantage of my rare weekend fishing excursion was the availability of parking. 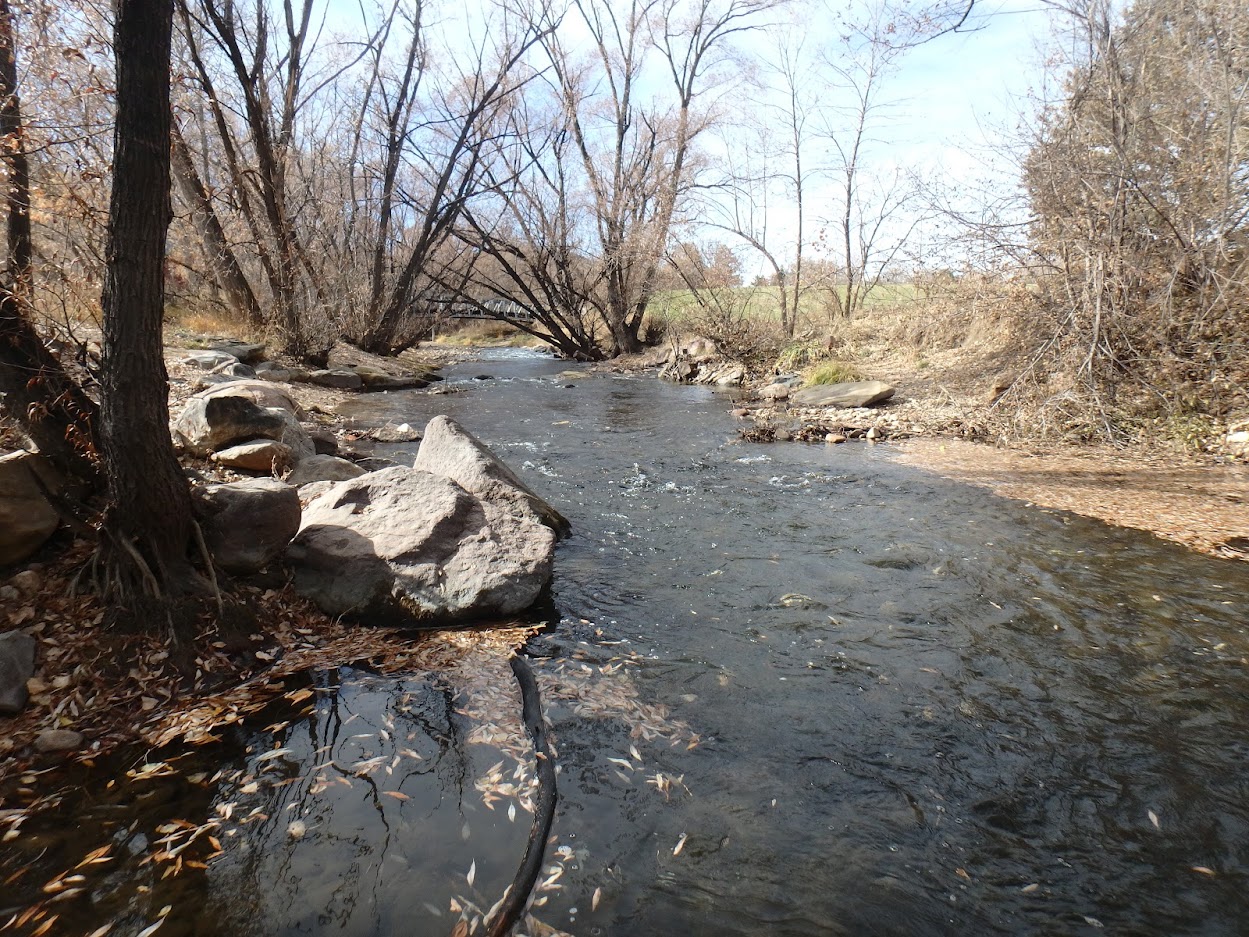 I assembled my Orvis Access four weight rod and quickly ambled to Boulder Creek just below the 30th Street Bridge. I knotted a peacock hippie stomper to my line and then added a beadhead hares ear nymph and salvation nymph. These flies remained on my line during my entire stay on Boulder Creek. The stream was seasonally low, but no snow remained from the back to back storms of the previous week. The temperature was in the low sixties and the sun was bright, so I elected to forego additional layers beyond my fishing shirt over a long sleeved Columbia undershirt. 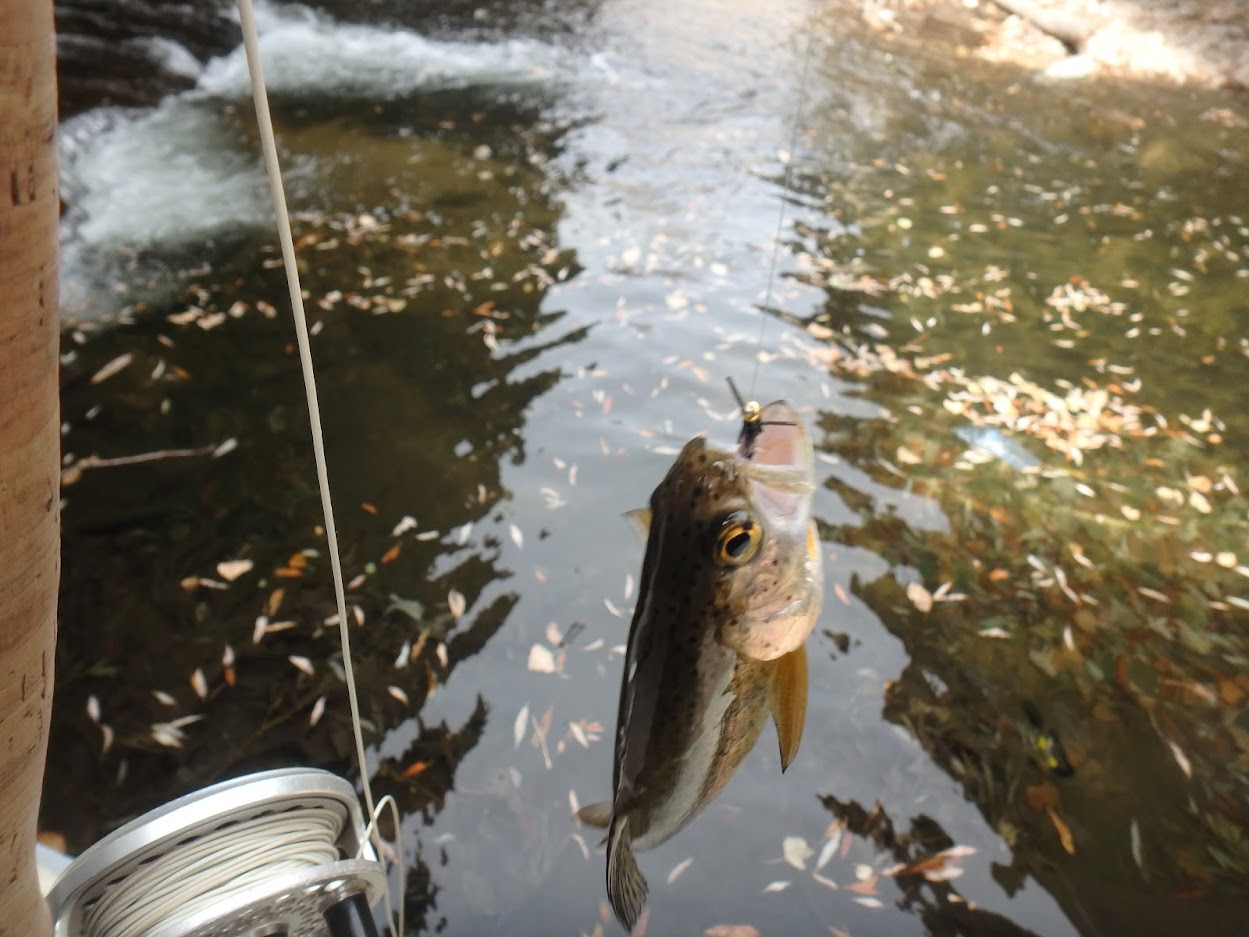 A Rare Rainbow from Boulder Creek in Boulder, CO

I covered .6 mile of water in my 3.0 hours on Boulder Creek, and I landed eight trout in the process. All except one of the temporary net residents were brown trout, with the outlier being a colorful rainbow. The largest trout was barely eight inches, and most fell within the six to seven inch range. The hippie stomper served as an indicator, although two or three fish flashed to the surface only to veer away at the last instant thus registering only teasing refusals. 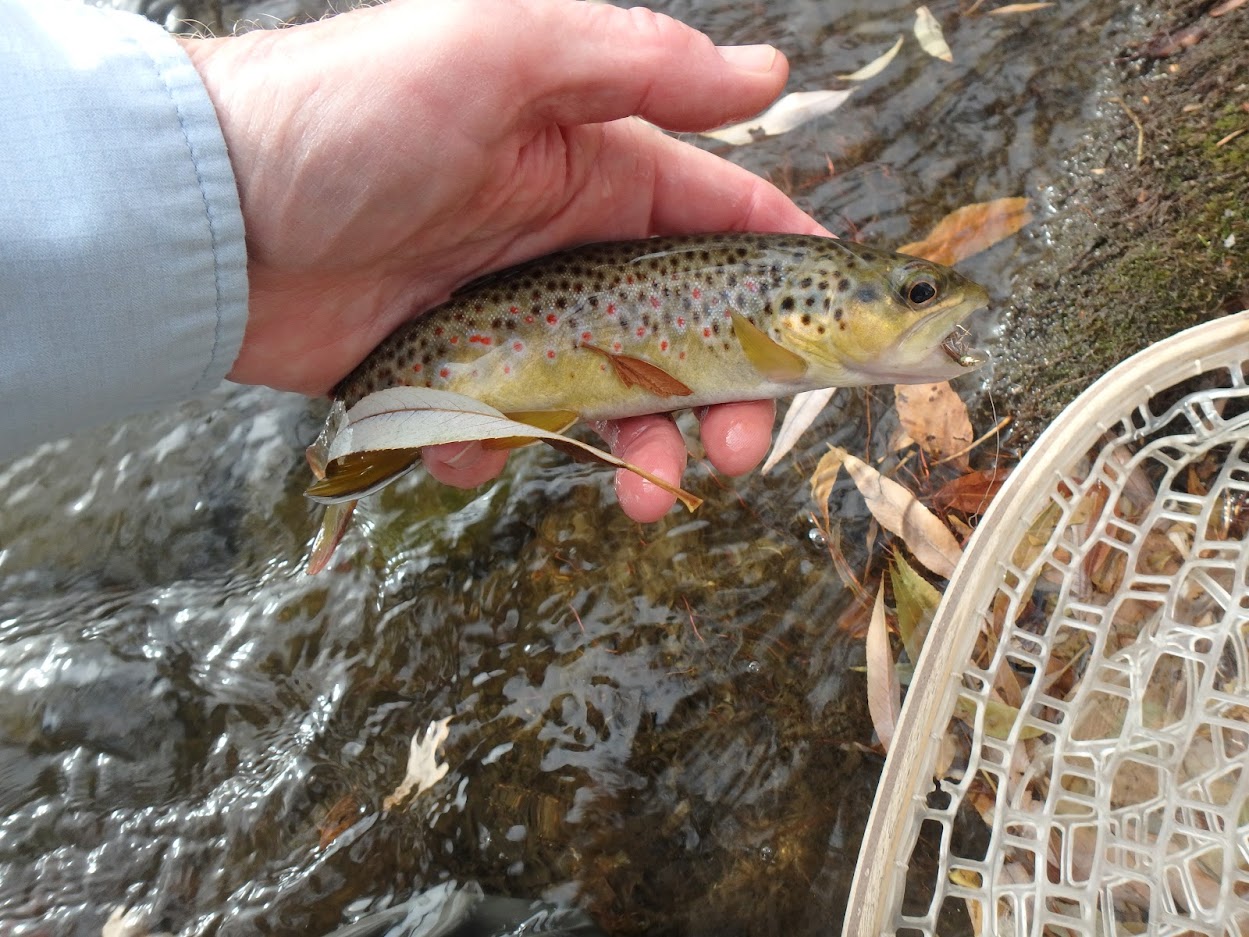 The shallow condition of the stream caused me to skip significant sections, as I sought slower moving areas with greater than normal depth. The most effective technique was an up and across cast followed by a long drift to a point three quarters below my position. Most of the trout nabbed one of the nymphs, as the flies began to accelerate away from the bank, or as I executed a lift to initiate a new cast. I tried to remain on the north bank as much as possible, as this position avoided the strong glare that made tracking the hippie stomper difficult from the south bank. 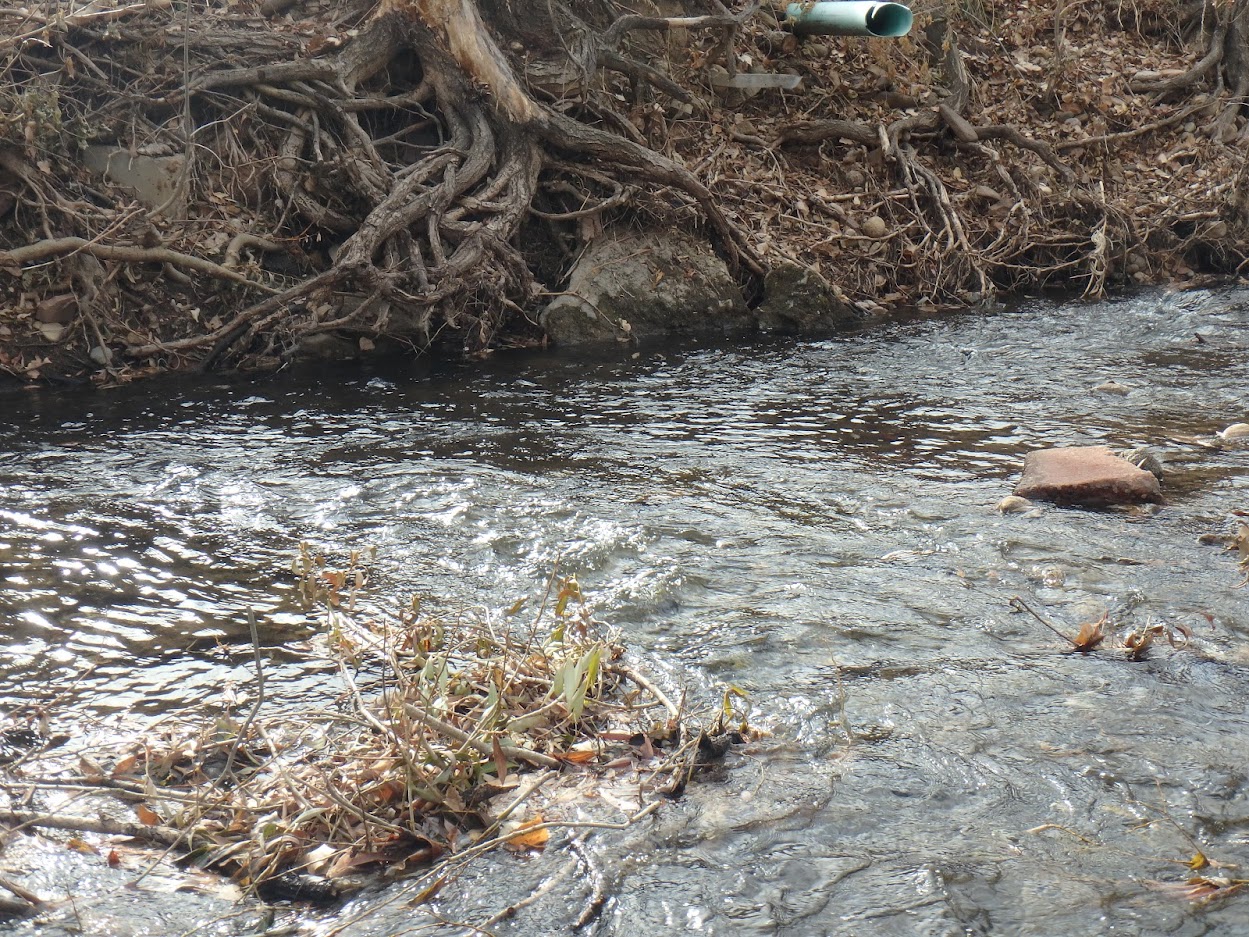 The Slack Water by the Roots Produced

Sunday was a short outing and the fish were small, but I took advantage of one of a dwindling number of warm days in November. The Boulder Creek bike path was swarming with skateboarders, dog walkers, runners, walkers, and cyclists; however, I only saw one other fisherman, and I was pleased with that circumstance on a rare weekend outing. I checked the weather forecast, and a high of 65 is predicted for Wednesday. Perhaps another visit to Boulder Creek is in my future for 2019. 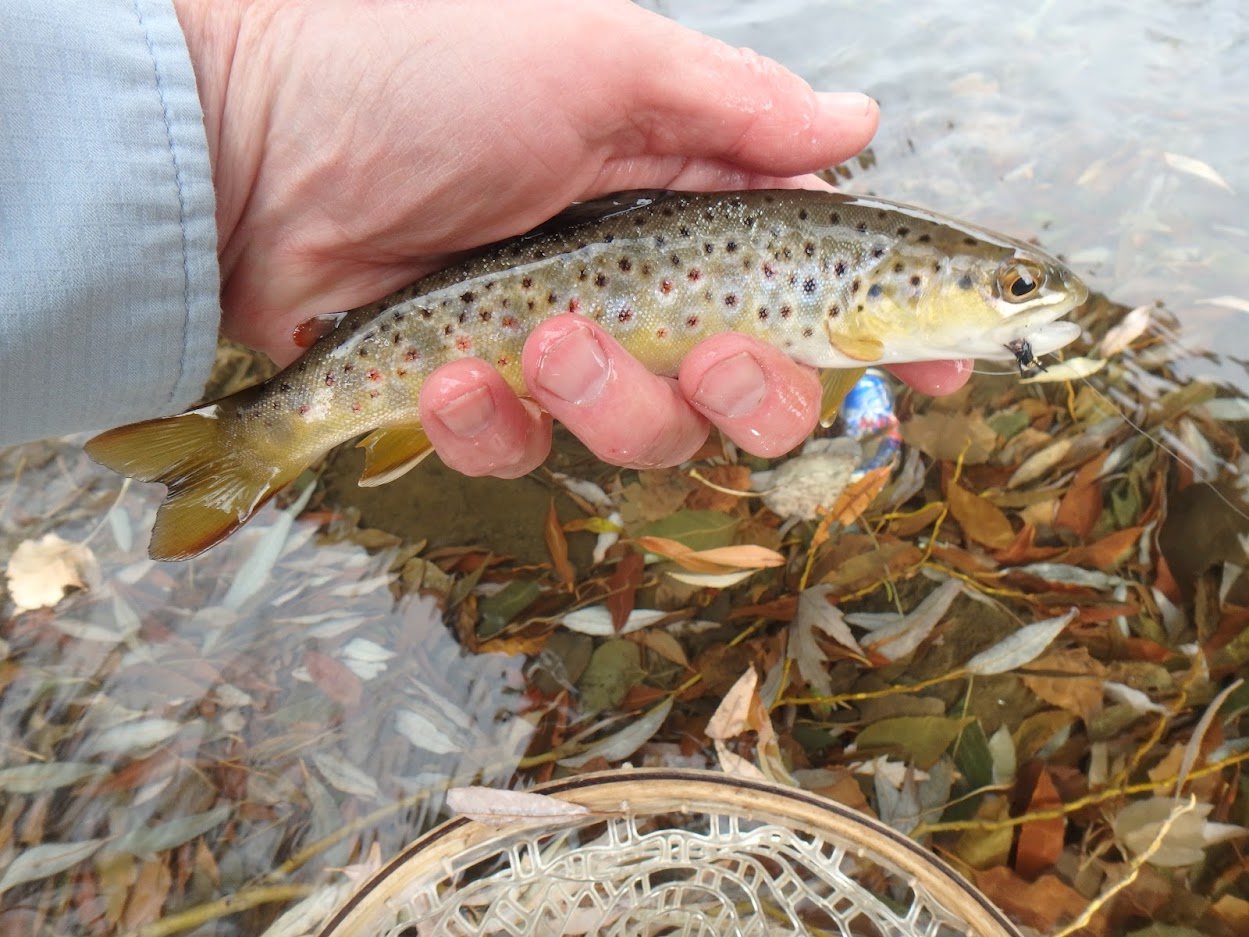 One of the Best Fish of the Day