An early cold snap remained Colorado from October 4 through October 16, and I managed only one chilly day of fly fishing on the Arkansas River on October 11 during this time. Clearly I was aching to wet a line, but the month of October was not cooperating. As I scanned the weather forecast at the beginning of the week (after a snowstorm), I noted a small warming trend with highs reaching the upper sixties and even seventy by the end of the week. Peak temperatures on Tuesday and Wednesday were in the mid-50’s, and from experience I knew that this translated to forties or less in the foothills and higher elevation locales. I pondered my options and considered streams along the Front Range at lower elevations. Immediately Boulder Creek in the City of Boulder crossed my mind, and I decided to make the short trip to the urban setting on Wednesday. I contacted my son, Dan, who lives in Louisville next to Boulder, and he informed me that most of the snowfall from Saturday and Sunday had melted.

I departed Denver at 10:30AM with the expectation of arriving in Boulder near the creek and in a position to fish by 11:30. Unfortunately I was delayed when a car rear ended me, as I was waiting to turn right from the US 36 ramp on to Baseline Road. I pulled into a bank parking lot off of Baseline, after I turned, and I exchanged insurance and contact information with Richard. The damage was minimal, but I decided to place a claim rather than drive with six or seven scratches that were inflicted by another inattentive driver.

After I geared up with my waders and Orvis Access four weight rod, I noted that my watch displayed 11:40, so I decided to consume my lunch rather than stash it in my backpack for a short amount of time. Finally after lunch I anxiously crossed a grassy area to a bridge and then followed the Boulder Creek bike path downstream for forty yards, where I entered the stream to begin my quest for trout. I began my search for fish with a peacock ice dub hippy stomper and a beadhead hares ear nymph. In the early going I managed a temporary hook up with a small brown trout, but that was the extent of the action in the first twenty minutes. 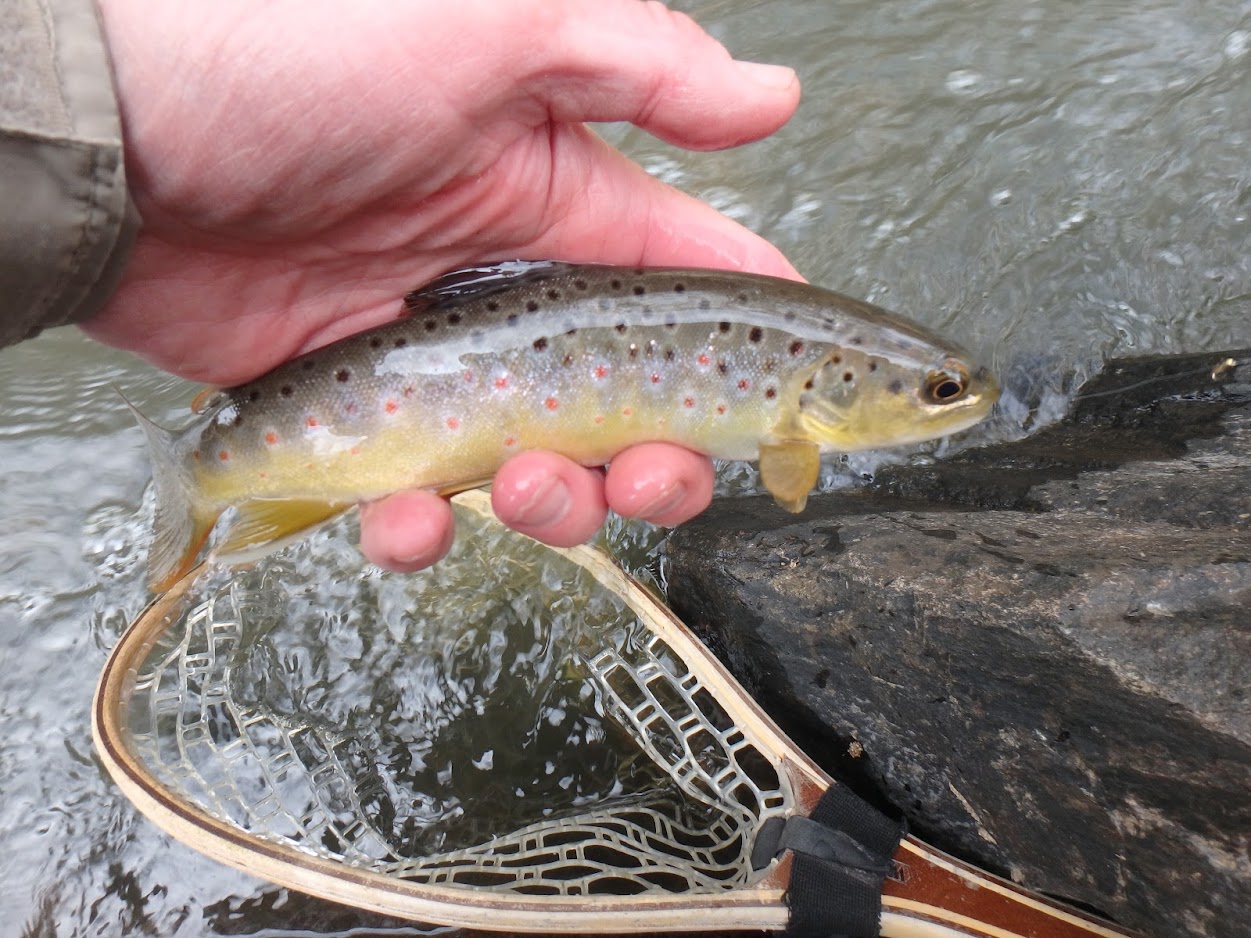 When I passed under the bridge and approached a nice deep run, I concluded that a change was in order, so I knotted an ultra zug bug below the beadhead hares ear. This addition provided a small degree of success, as I netted two wild brown trout that could not resist the ultra zug bug.

After I moved through the deep run and approached another nice deep trough along the north bank, I heard a rustling sound behind me. I pivoted quickly and discovered Jane and our grand puppy Zuni along the gently sloping shoreline. Zuni was interested in my dangling wading staff, but before she could sink her teeth into it, I lifted my rod tip and felt the tug of a fish. I steered the splashing attachment toward the bank, and Zuni immediately showed excited interest. When I lifted the brown trout and steered it toward my net, I realized that it was foul hooked in the dorsal fin, so I quickly wet my hand and grabbed the small trout and removed the hook. Before I released it to its aquatic environment, I held it out for Zuni to inspect, and she greeted the puzzled wet creature with a gentle tongue lick! 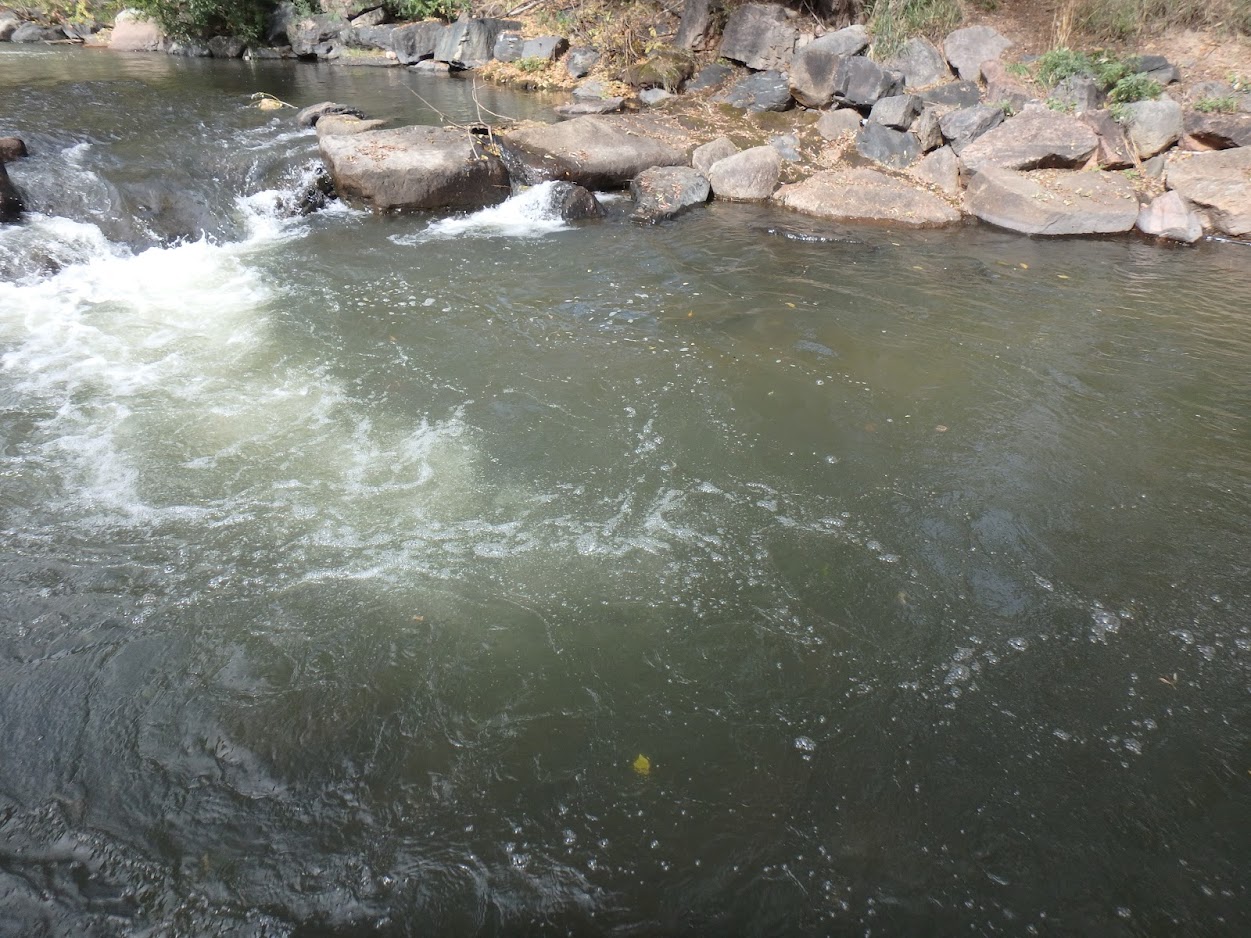 Jane and Zuni stopped briefly on their return from Davidson Mesa, so after the fish encounter they departed for Zuni’s home in Louisville. I meanwhile resumed my search for wild Boulder Creek brown trout. I continued prospecting with the hippy stomper/hares ear/ultra zug bug combination, and the fish count elevated to twelve before I quit at three o’clock. The catch rate was steady, and I covered quite a distance, while I hooked and landed ten additional fish. Six of the small browns nabbed the ultra zug bug and the remainder snatched the hares ear. Nearly all the net dwellers emerged from slow water that bordered faster runs, and I learned that shallow riffles and marginal pockets were not favored by the Boulder Creek residents. Halfway through the afternoon session, an errant hook set looped around a high tree branch. After a brief struggle I managed to retrieve the ultra zug bug, but I sacrificed the hares ear and a one foot section of tippet to the limb. The net result of this undesirable encounter was a reduction in the length of the droppers, and I concluded that the shortened configuration was more appropriate for the small urban stream.

Wednesday evolved into a decent outing in spite of chilly conditions. The temperature actually touched sixty, and it felt warmer in the sun. I landed twelve small wild brown trout in three hours of fishing, and the outing only required a brief thirty minute drive. The unexpected introduction to Richard and his Subaru was unfortunate, but the damage was minimal, and I will likely gain an unblemished bumper from the incident. A brief visit from Jane and Zuni were icing on the cake.