Friday was my one week anniversary since skin surgery, and I felt a pressing urge to fly fish, so I searched for a location with relatively easy wading to minimize the risk of banging the site of my incision on my right leg. Boulder Creek within the City of Boulder was my choice, and it fit my needs nicely.

Friday’s weather was spectacular with blue skies and sunshine, and the air temperature spiked in the seventies. I selected a new section of Boulder Creek, and I arrived at a parking space near the creek at 11:45AM. I decided to down my lunch first rather than lug it in my backpack for a mere thirty minutes. Lug is probably an exaggeration. 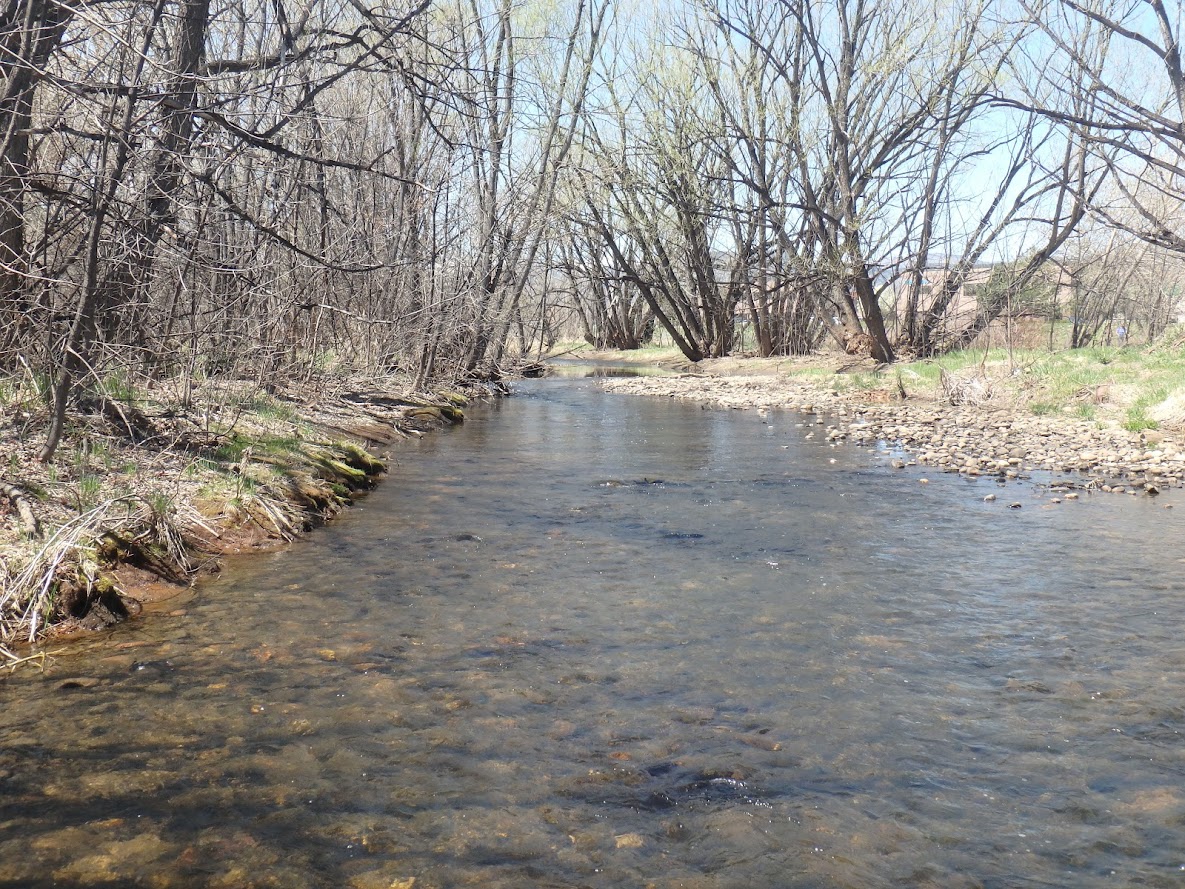 After lunch I climbed into my waders and assembled my Loomis five weight, and then I followed a narrow single track path downstream for fifty yards, before I quietly entered the stream. I began with a black peacock ice dub hippy stomper and a beadhead hares ear on a two foot dropper. In the first thirty minutes I witnessed two refusals to the hippy stomper and two momentary connections with small brown trout. Finally I drifted the two fly combination in a narrow ribbon of water between the current and the opposite bank, and a short chubby brown slammed the hares ear. I was on the scoreboard and documented my catch with a photo. 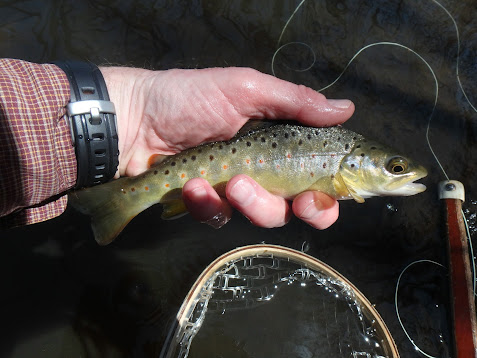 The next half hour produced another long distance release, but I played this brown trout for a minute or more before it escaped. I cast to some three foot deep riffles that flowed over some relatively large submerged rocks, and the trout appeared from a hideout between the boulders. It would have been the best fish of the day.

Once again I endured an extended period of inactivity, so I decided to abandon the dry/dropper for a solitary dry fly. My choice was one of the seven size 14 deer hair caddis flies, that I tied on Wednesday. The change proved to be beneficial, as I landed five more small brown trout on the dry fly before I quit at 3:30. 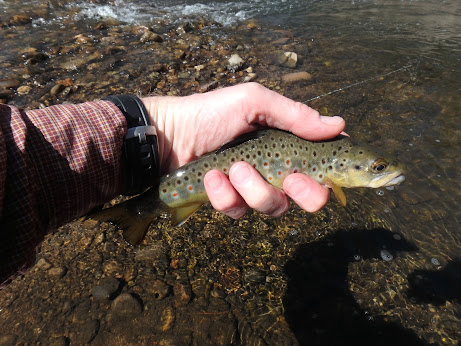 Last Trout of the Day

I covered a significant distance and skipped over a ton of water, as I searched for proven water types. What was productive water on April 27? Nearly all the caddis fanciers appeared where faster current bordered slow-moving areas with some depth. These fish conserved energy in the pools and pounced on food, as it tumbled by on the adjacent aquatic conveyor belt. 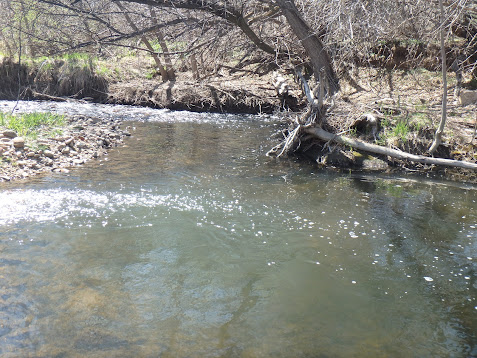 A Fish Appeared Where Currents Merge

One fish stood out as the most memorable, and it materialized from a spot that does not match my productive water description. I was slowly wading upstream, when I spotted a single random rise in a long slow pool. Just above the scene of the rise a large angled fallen tree spanned the entire width of the stream. I exited the creek very carefully and then slowly edged my way around the root ball of the dead fall and stopped five feet from the shoreline. At this point I knelt and partially hid behind the tree to prevent the trout from seeing me. 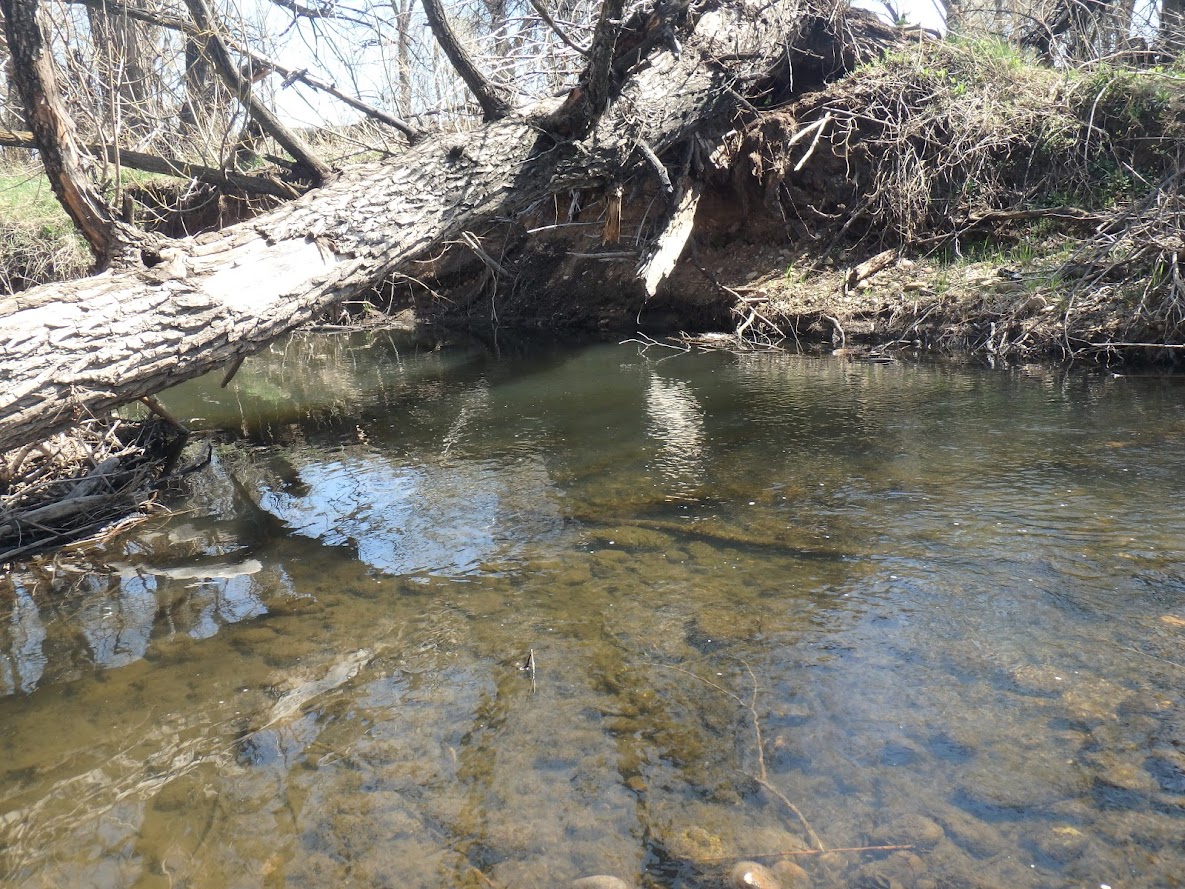 When I was satisfactorily positioned, I fluttered a cast to the center of the pool and allowed it to creep toward the site of the recent evidence of surface feeding. The enticing caddis failed to prompt a reaction, so I continued with two more casts and extended each a bit farther toward the opposite bank. I was about to surrender to the choosey underwater resident, but I decided to lob one more soft cast to the center of the stream. The olive hares ear caddis drifted a foot, when suddenly it was attacked by a voracious Boulder Creek brown trout. Sure it was only nine inches, but I savored the stealthy approach, the challenge of making an accurate cast, and the gratification of seeing a wild trout in my net. 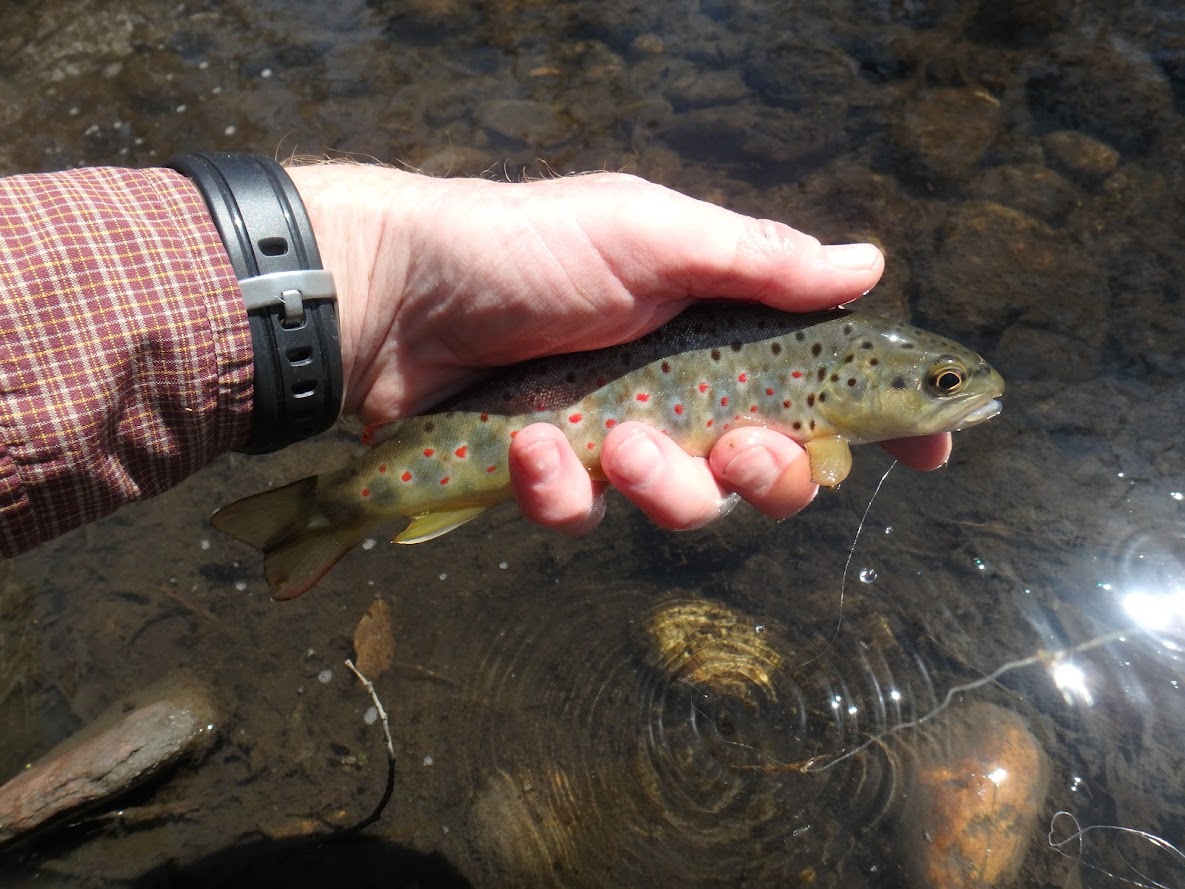 Friday was just what the doctor ordered…relatively benign wading, warm weather, a lack of wind, and a slow pace while stalking wild trout in a section of water never previously explored. It was a fun day after a one week layoff.