Weather was a deterrent to fishing on Monday, April 25, but I persisted. It was not a stellar day of fishing, but fly fishing nonetheless. My number one consideration, as I planned a trip, was air temperature and wind. Originally I anticipated a trip to the Arkansas or South Platte in search of blue winged olive activity, but the highs were in the upper forties in those locales. I was not anxious to undertake a long drive with the prospect of frozen hands and feet, so I narrowed my choices to the Front Range. Estes Park and Pinecliffe also displayed highs in the upper forties, so I settled on Boulder Creek. Highs in Boulder were forecast to peak at around 54 degrees, so this translated to fifty in Boulder Canyon. The forecast was accurate, as I bundled in fleece, down and ear coverings; and I was consistently at the low end of the comfort zone. Cold feet and stinging hands are always my cold weather downfall, and that was the case on Monday.

I arrived at a wide parking space along Boulder Creek by 11:15AM, and this enabled me to position myself along the small stream by 11:30AM to begin casting. I was armed with my Sage four weight, and I fished unsuccessfully for thirty minutes, before I climbed the bank to a convenient bench and ate my lunch. After lunch I resumed fly fishing, as small crystal pellets descended from a dense overhead cloud. It was definitely cold. My early fishing utilized a peacock hippie stomper and an olive-brown caddis, but the combination simply produced refusals and a couple very brief hook ups. By one o’clock I managed to land a couple very small brown trout that chomped the hippie stomper, but it was very slow going. I was baffled by the preponderance of refusals, so I experimented with a size 22 CDC BWO behind the hippie stomper. This tactic was not effective, so I paused to assess additional options. 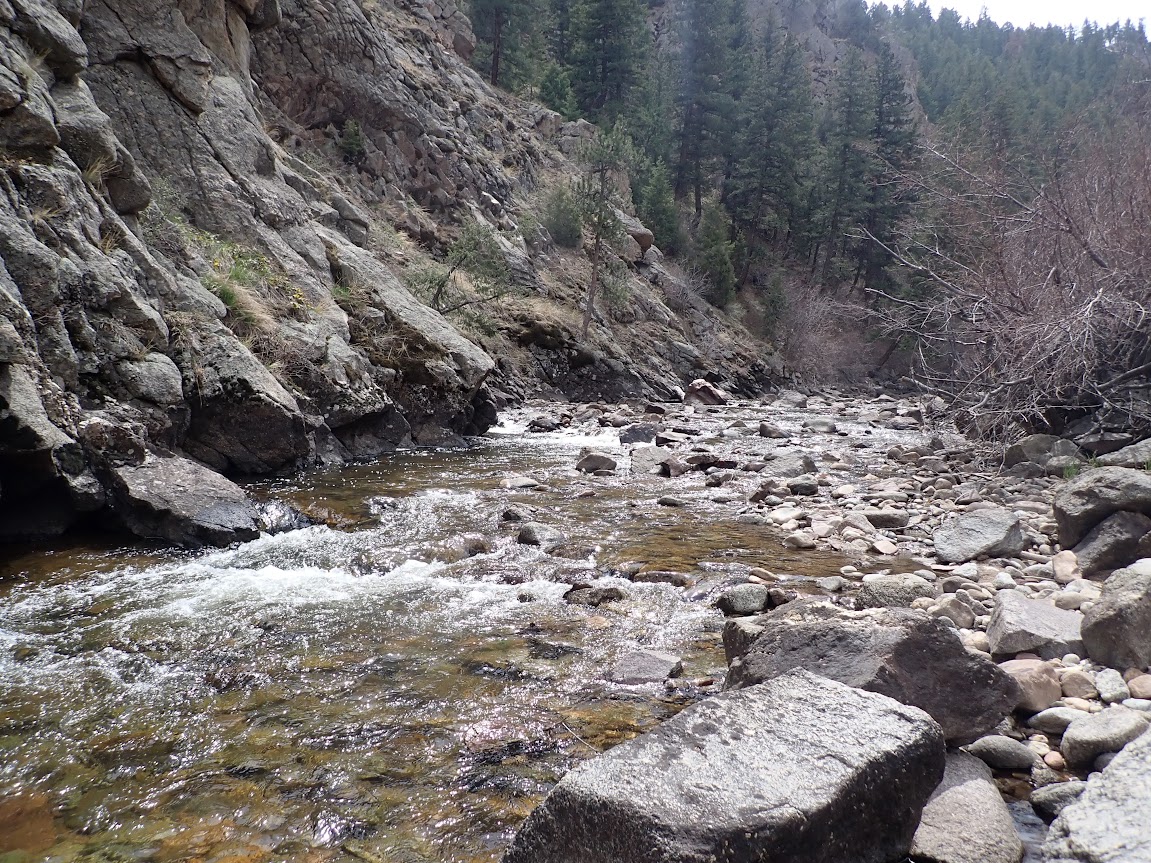 The first fly over the trout was typically the hippie stomper, and it was grabbing the trouts’ attention, but they refused to eat. I removed the hippie stomper and replaced it with a size 14 gray stimulator for a decent amount of time, but this combination was worse, as it failed to yield even refusals. Next I swapped the stimulator for a Chernobyl ant in order to support some heavier nymphs that included a beadhead hares ear and sparkle wing RS2. One small brown trout actually latched on to the Chernobyl, as I lifted it to cast, and that brought my fish count to three. It was definitely slow going on a winter-like spring day. 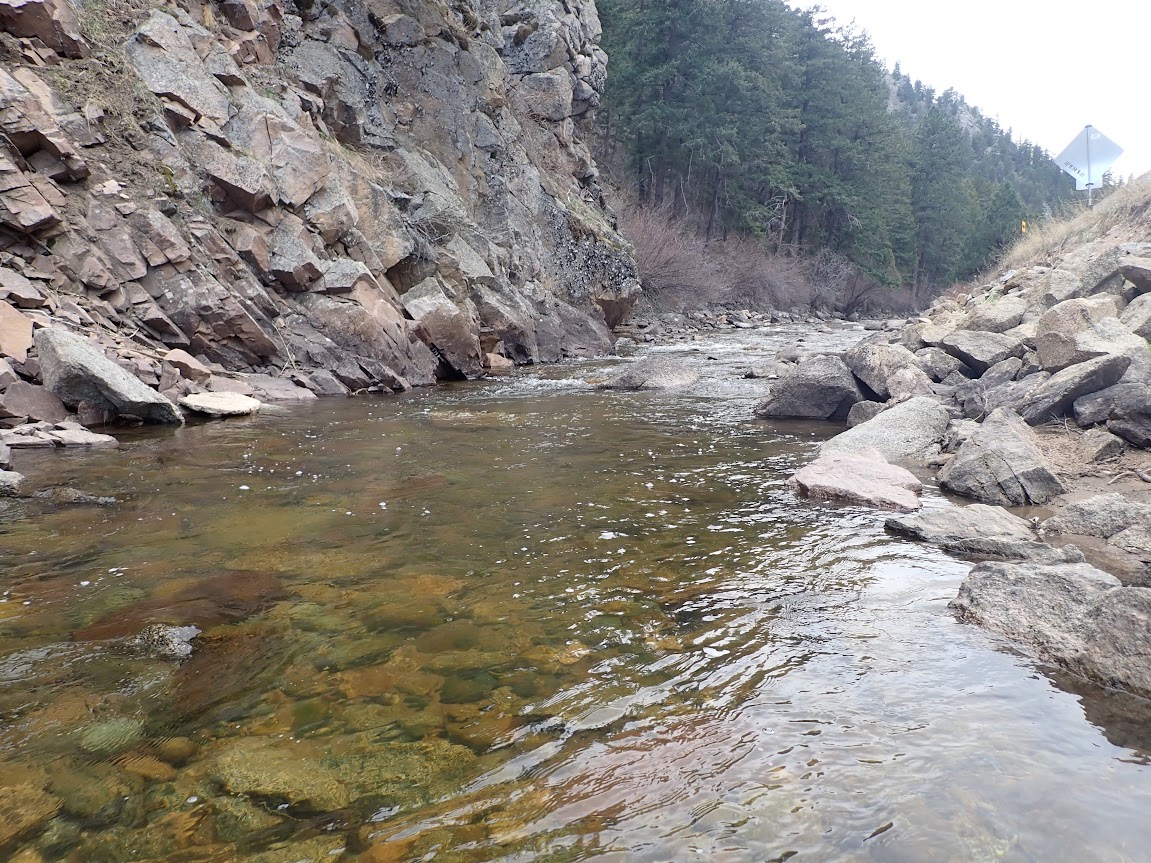 Similar to the stomper, the Chernobyl mostly produced looks and refusals, so I once again changed my approach. I plucked a size 14 Jake’s gulp beetle from my fly box and knotted it to the 5X leader. Beneath the beetle I extended a two foot leader and added a sunken ant. While these two terrestrials occupied my line, I noted one look at the beetle and one very temporary grab of the ant. The land based insects were not clicking with the Boulder Creek trout, so I reverted to the hippie stomper. The stomper at least attracted the most interest, but for the second trial on my line I elected a hippie stomper with a red body. I added a salvation nymph as the top subsurface offering, and beneath it I reprised the sparkle wing RS2. 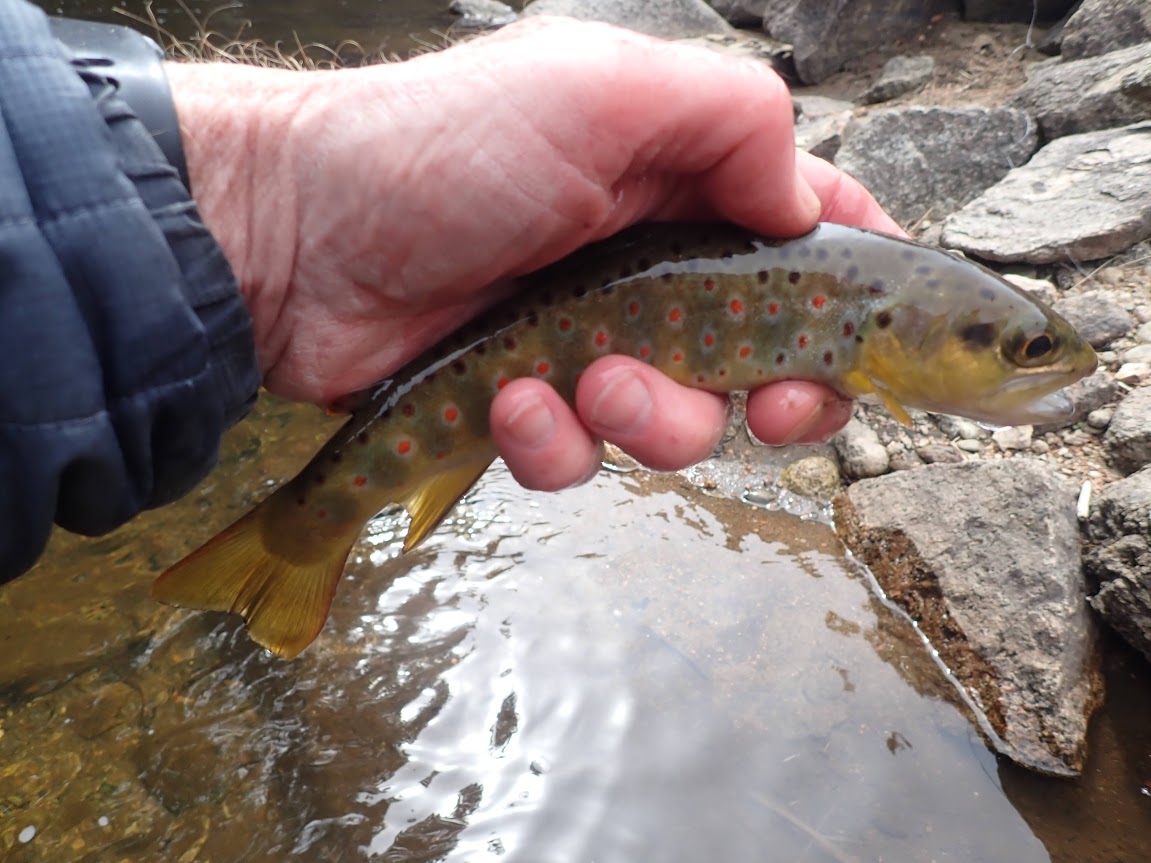 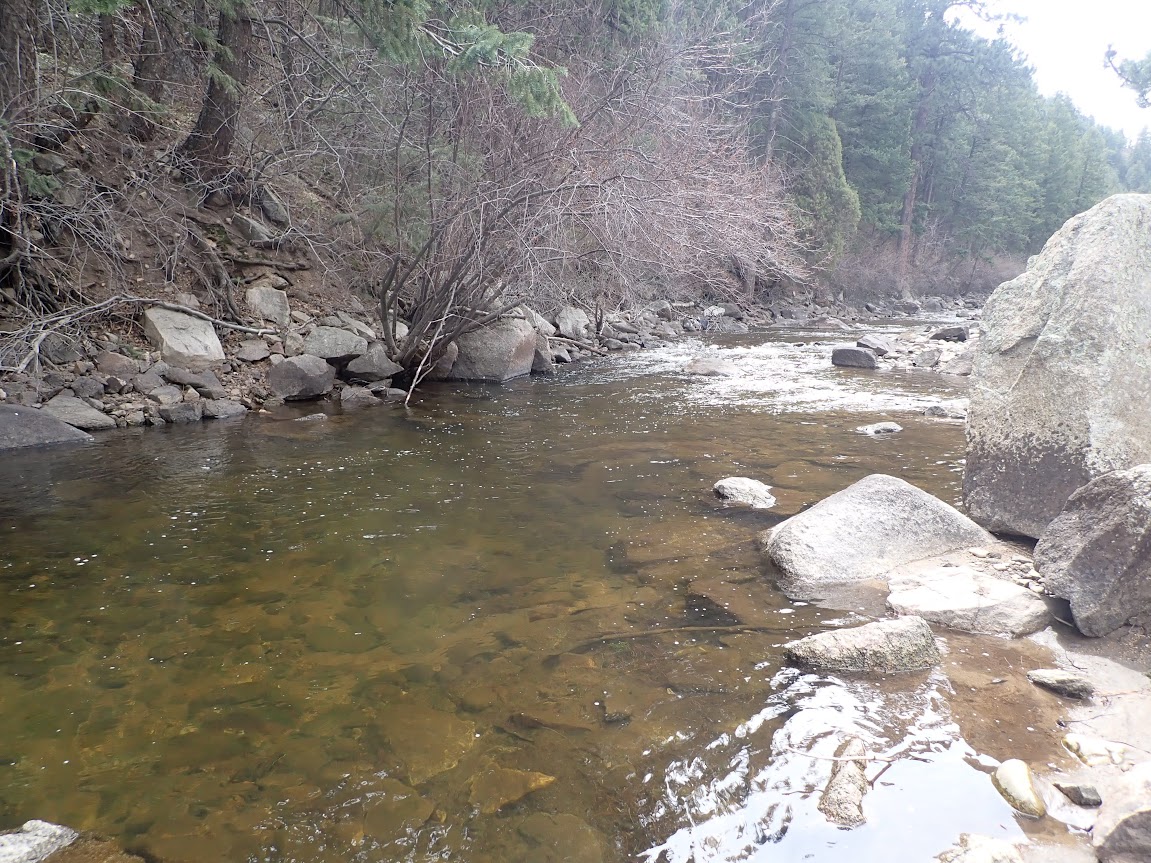 By 4PM my hands were stinging from the wind and the evaporation effect, my feet were morphing into stumps, and a constant chill ran up my spine. I clambered up a short but steep bank and returned .3 mile to my car. I was very happy to reacquaint myself with the warmth of the heater.

Seven fish over 4.5 hours was clearly a subpar catch rate, and the size of the fish was lacking. For some reason the tiny brown trout in Boulder Creek are very selective. The fish were mostly looking toward the surface, although I did land four on nymphs between 1:30 and 3:30. In addition to the seven netted fish, I endured quite a few temporary hook ups and even more refusals, Given the wind and frigid conditions. I was actually satisfied with my production. A warming trend is in the forecast for the rest of the week; so, hopefully, I will make a longer drive to one of the larger rivers and experience a decent blue winged olive hatch. Stay tuned.