My outing a week ago on Boulder Creek merely served to whet my appetite for closure on unfinished business. I was only getting warmed up, when I quit at 5:30PM with seven trout registered in my fishing log.

Until I checked the DWR flow information on Monday, the gauge on Boulder Creek at Orodell displayed an I for ice. I mentioned this in my last blog report, and perhaps a DWR employee read my post and corrected the reporting bug. More likely the timing was coincidental, but regardless of the reason, the graph now showed 33 cfs for Boulder Creek. I knew from historical experience that this level was very acceptable for fly fishing. The air temperature in Denver was projected to peak in the upper sixties, so this placed another variable in the favorable column, and I chose to make the drive to Boulder Canyon.

Jane and I drove through Boulder on Sunday on our return from a hike with grand puppy, Zuni, and I recalled seeing a road sign warning of a closure to Boulder Canyon. In addition to checking flows and weather, I now resolved to access the COtrip.org web site for road conditions. After a bit of wheel spinning I found the Colorado road conditions page, and the Boulder Canyon entry informed me that CO 119 in Boulder Canyon was closed for blasting April 17 through April 19. I was planning a trip on April 16, so all systems were go. 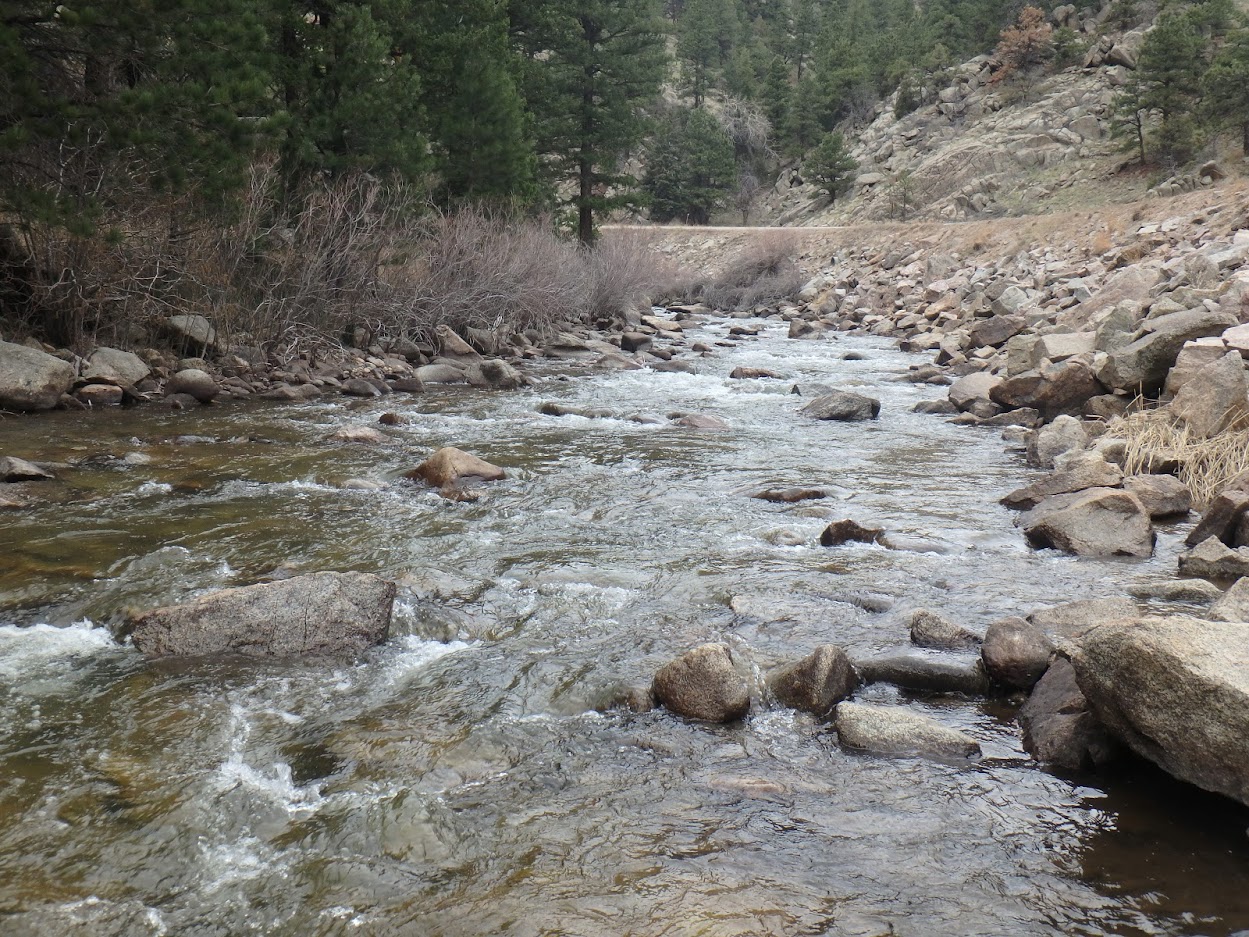 By 11AM I arrived at the same pullout that my car visited a week ago next to Boulder Creek. I quickly climbed into my recently patched waders and then geared up with my Orvis Access four weight and added a light fleece layer. The air temperature was in the low sixties, and it felt chilly, when the sun disappeared behind some large heavy gray clouds. I ambled upstream along the shoulder of the highway for .1 mile and then carefully scrambled down an angled path to the creek. I began my day with a Chernobyl ant, hares ear, and soft hackle emerger before lunch; and this combination enabled me to land two fish. One of the brown trout nipped a soft hackle emerger, and the other latched on to the Chernobyl ant. 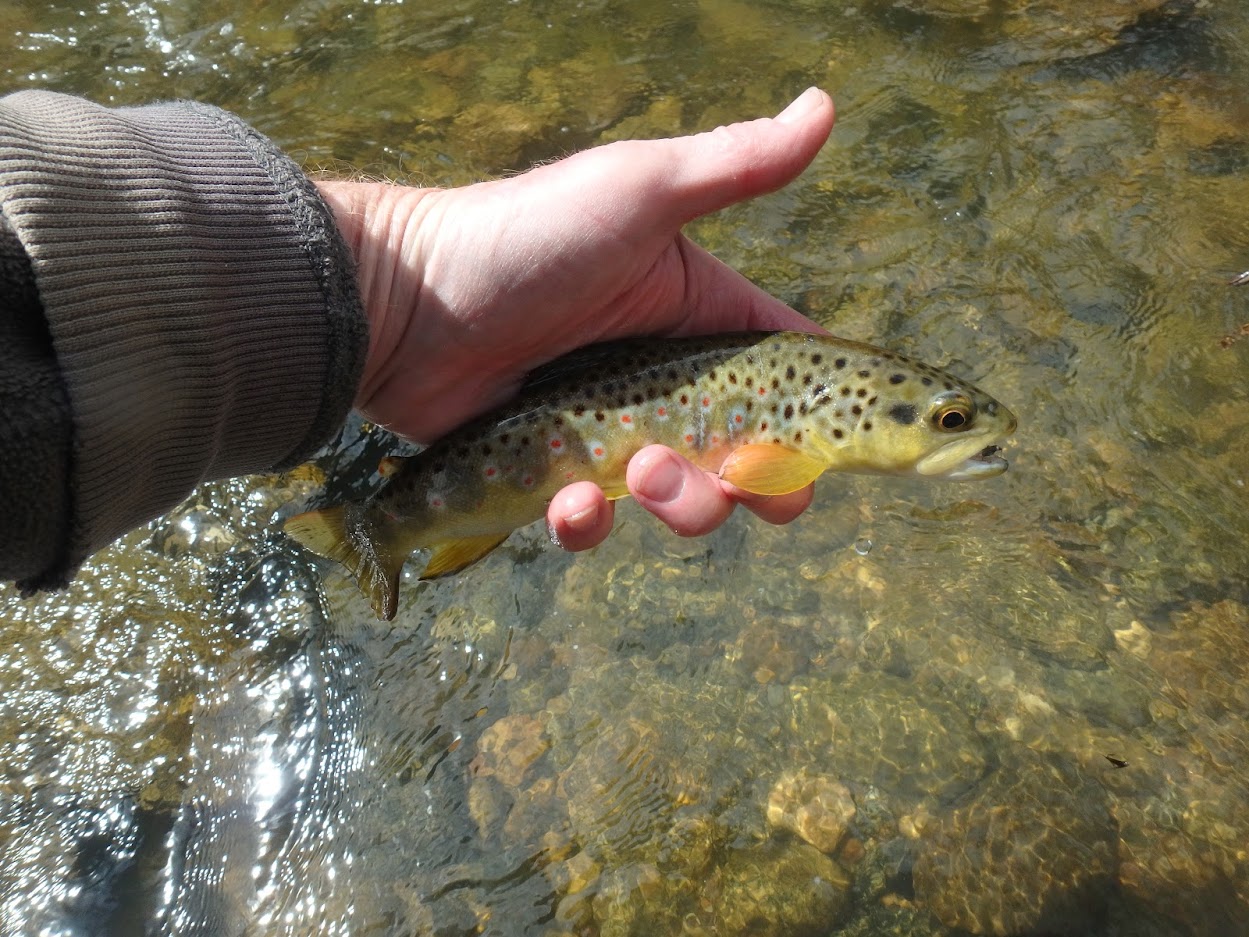 Several minutes after noon I encountered a gorgeous wide pool, but my quest for trout was plagued by refusals to the Chernboyl ant. I decided to pause for lunch and then modify my lineup, before I resumed in the afternoon. I followed through on this commitment, when I switched to an olive-brown size 16 caddis. The refusals suggested that the fish were looking to the surface for their meal, and I gambled that the small caddis dry fly was the answer. The ploy was worth a brief trial, but the visible fish in the pool ignored the small hackled offering. 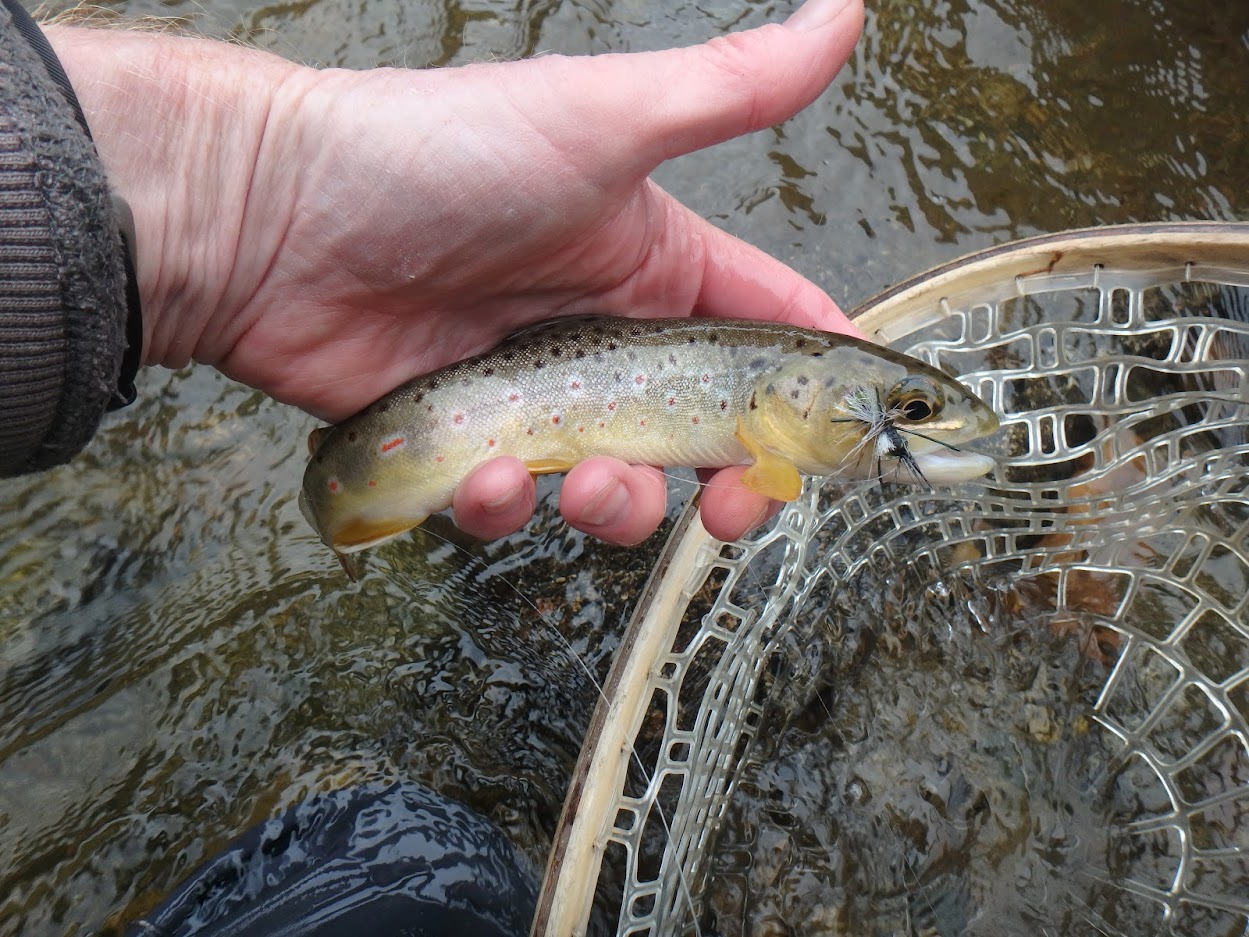 After a fifteen minute test I gave up on the caddis, and I revisited the dry/dropper approach with a hippy stomper, ultra zug bug, and a classic beadhead RS2. This lineup was not productive, so I once again made a change and converted to an emerald caddis pupa instead of the ultra zug bug. During the last hour of fishing in the afternoon I used a massive tangle as an excuse to swap the emerald caddis pupa for a beadhead pheasant tail nymph. 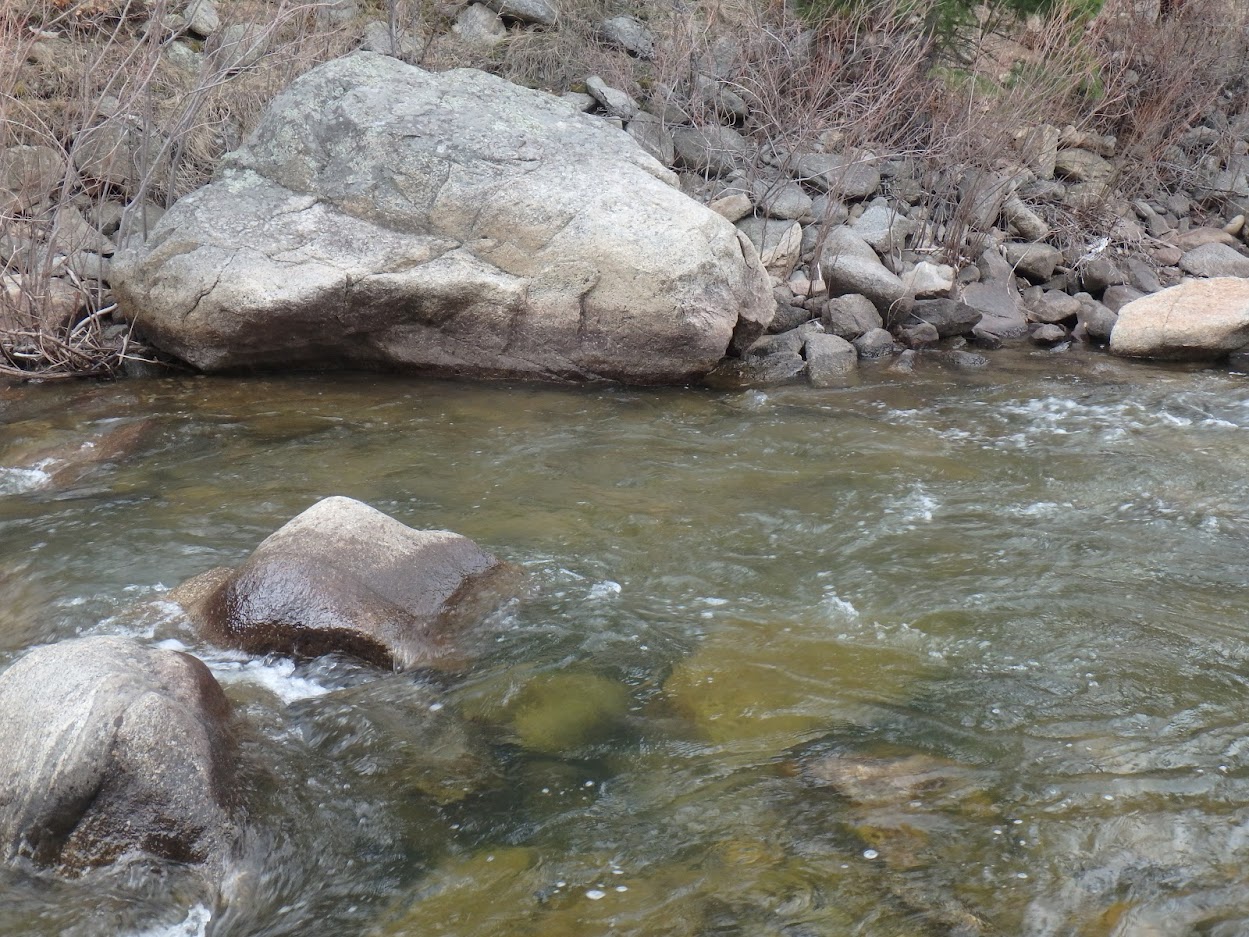 Trout Lair For Sure

Between 12:30 and 3:30 I progressed upstream for .5 mile at a fairly rapid pace, and I popped casts with the dry/dropper to likely fish holding locations, while I built the fish count from two to thirteen. Two fish snatched the pheasant tail nymph, two inhaled the RS2, and the remainder slurped the hippy stomper. During my entire time on Boulder Creek the hippy stomper was the top producer and accounted for eight trout. Tuesday yielded a reasonable catch rate; however, the fish were small, and I experienced a generous number of refusals to the hippy stomper and many momentary connections. 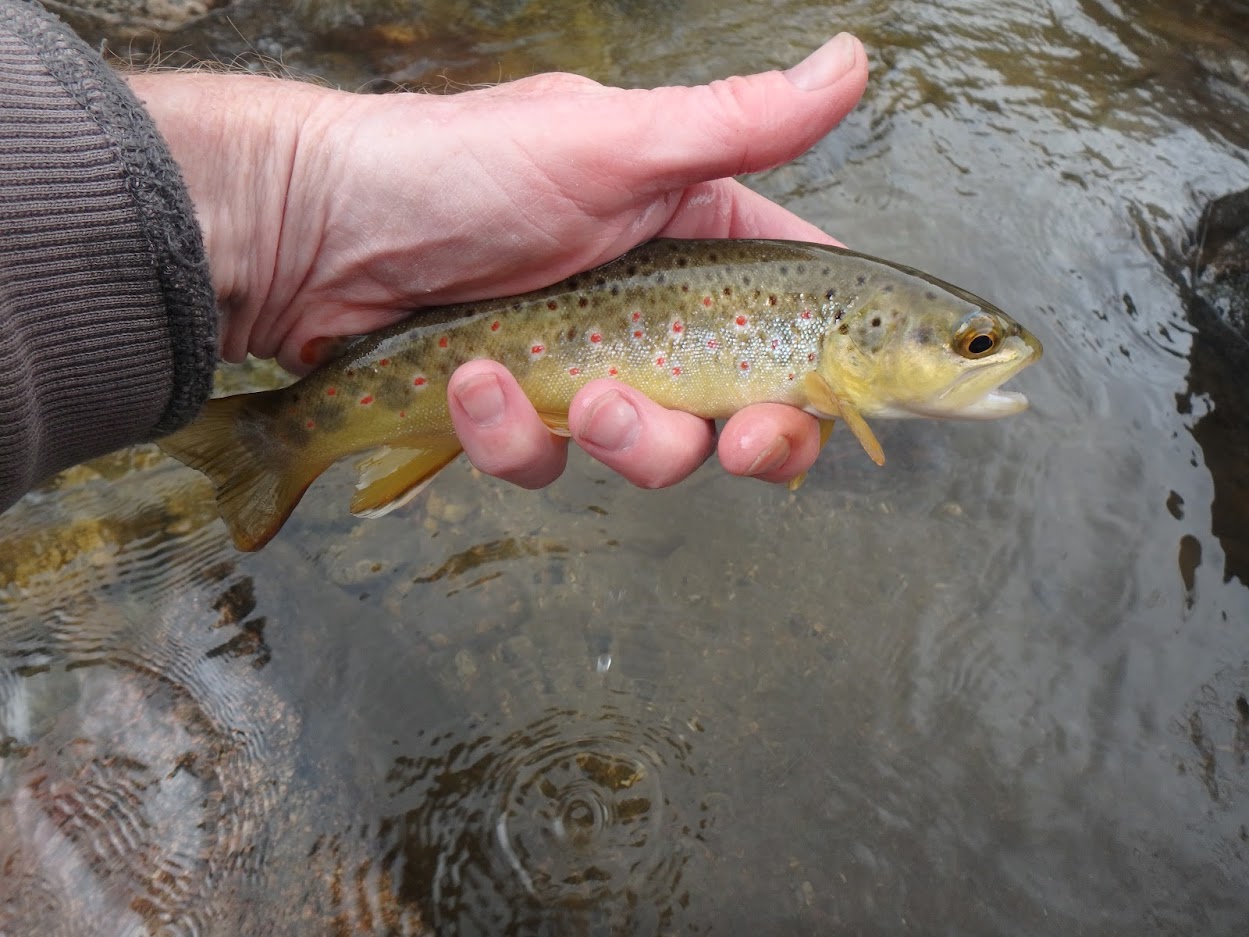 In spite of these frustrations, Tuesday was an enjoyable day on Boulder Creek. The air temperature reached the mid-sixties, although quite a few clouds moved in during the latter phase of the afternoon, and this shift in weather was accompanied by an uptick in wind. I prospected at a moderate pace with three to five casts to attractive runs, pools, and pockets. The nymphs produced, whenever I cast across and allowed the flies to drift along the rocky shoreline. The trout pounced, as the flies accelerated and swept by the tails of these areas. Brown trout were more prone to grab the hippy stomper on upstream casts to long runs, pools and pockets. 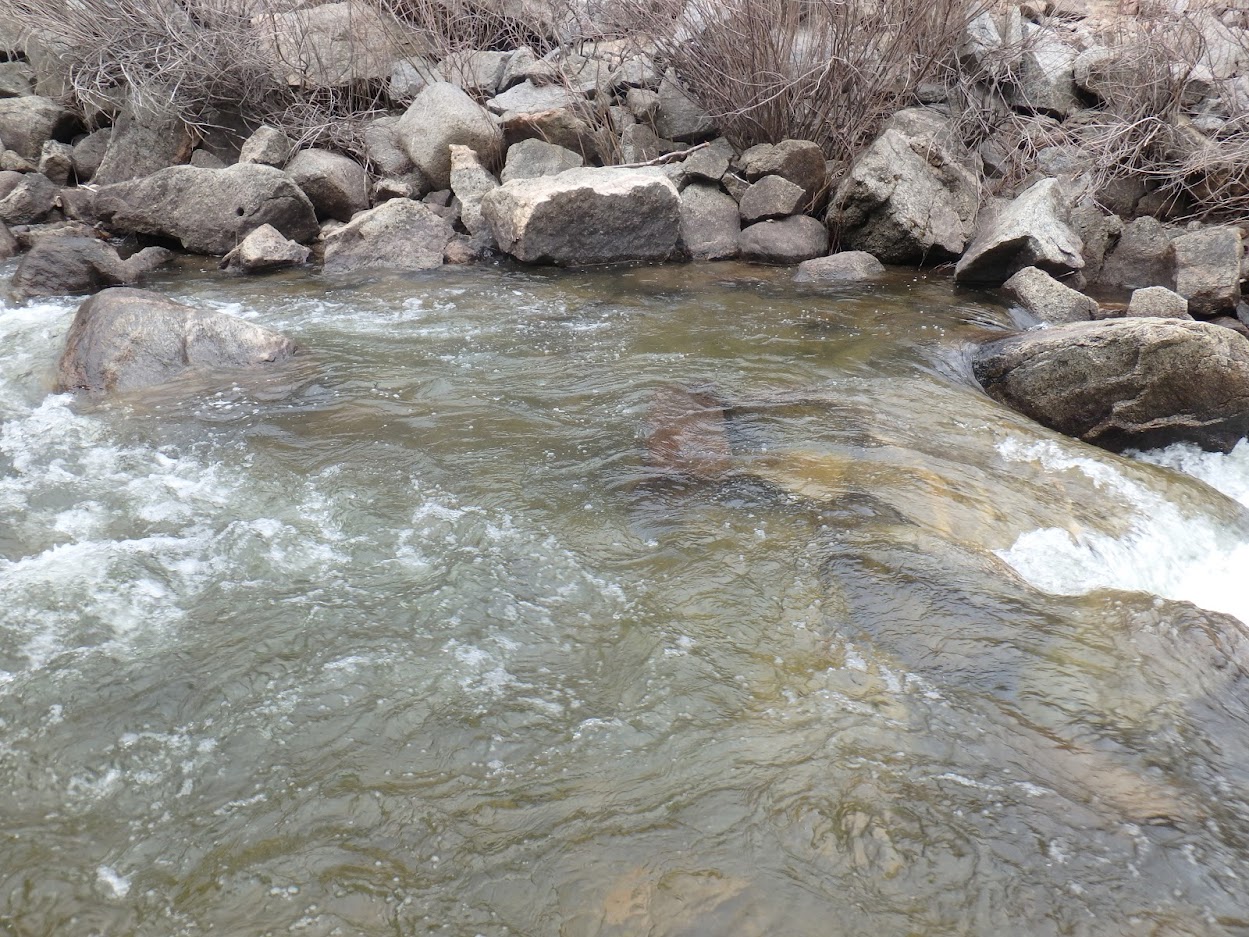 Slow Along the Bank