February 2, 2020 was a momentous day. Where shall I begin? I will start with the quirky date, as the month and day are the mirror image of the year, 02022020. Of course I cannot overlook the fact that Sunday was Groundhogs’ Day, my favorite holiday of the year. Groundhogs do not exist in Colorado, so local mammalian prognostications come from marmots, and given the gorgeous sunny day, I suspect the furry animals saw their shadow, and we are in store for six more weeks of winter. Given Colorado’s high elevation and relatively long winters, six more weeks would actually be a positive, for those who are not winter enthusiasts.

As I scrolled through my Instagram feed, I was informed that Sunday was Tater Tot day, and two local purveyors of food, Dog Haus and Smashburger, were offering free tots with the purchase of a meal. The offer was enticing, but Jane and I chose to defer. We woke up to the sound of tennis balls hitting rackets and watched most of the Australian Open men’s finals. Novak Djokovic battled through energy deficiencies and earned his eighth Australian Open title. Later in the day the foremost sporting event in the United States unfolded, and the Kansas City Chiefs won their second Super Bowl and first since 1970.

As if these events were not compelling enough, the weather in Colorado was spectacular. The thermometer spiked at seventy-five degrees in Denver, and with a winter storm on the horizon for Monday, I could not bypass the opportunity to fly fish on the second day of February. I called Dan, and he was game for some winter fishing, and I picked him up at his home in Louisville, CO. After an enthusiastic greeting from Dan and Ariel’s pup, Zuni, we departed and drove a short distance to Boulder Creek. As we pulled into the parking lot, we were disappointed to discover that all the spaces were occupied, but a two minute wait allowed a couple to return from a hike, and they quickly vacated a front row space. 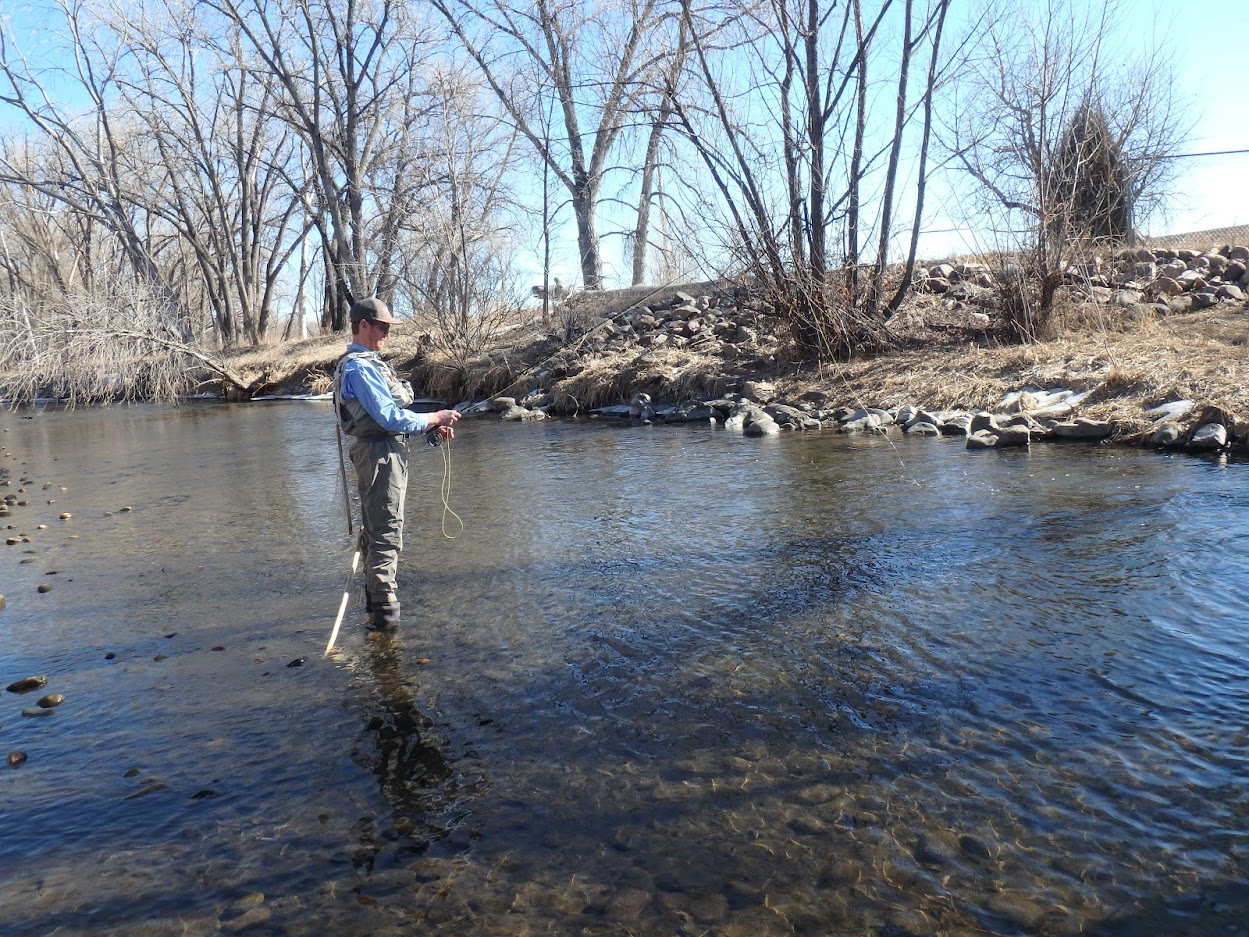 A Bank Side Run Near the Beginning

Wind was an ongoing hassle on Saturday, and we were concerned about similar conditions on Sunday, but other than an occasional breeze, the air was relatively calm. I rigged my Orvis Access four weight to take advantage of the lighter weight for casting, and the lack of significant wind allowed me to go short. When Dan and I were prepared, we began a short hike to the creek that allowed us to arrive by 11AM. Everything was brown, and the creek was low and clear, and the whole scene felt very contradictory, as the warm temperatures did not conform with the grim winter scene in front of us. 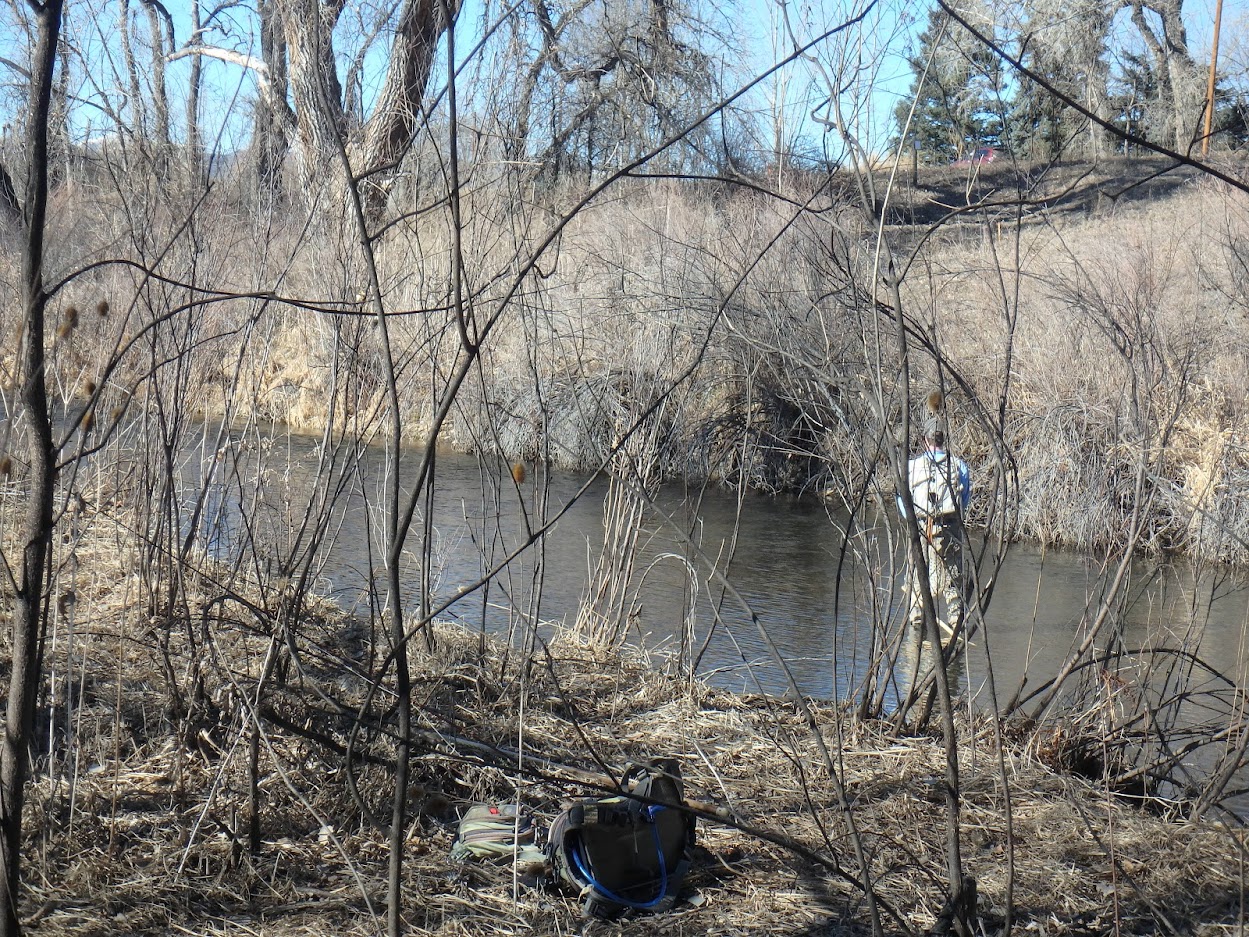 I wish I could report that the fishing was as momentous as the day, but I must confess that neither Dan nor I landed any fish. In fact, we failed to experience a momentary hook up, refusal or even a look from a resident trout. As we approached a very deep slow moving pool after our lunch break, we spotted five fish that darted for cover despite our efforts to be stealthy. It was great to gain confirmation that fish were present, but the extreme skittish nature of these fish was rather intimidating.

Dan and I alternated, as we approached the deeper runs and pools, and the low gradient of the section that we covered caused quite a bit of walking to skirt wide shallow stretches that were very likely barren of fish. I deployed a peacock hippie stomper, ultra zug bug and salvation nymph; while Dan offered a Chernobyl ant and hares ear nymph. Toward the end of the day we swapped the Chernobyl for a fat Albert for improved visibility in the glare and shadows. 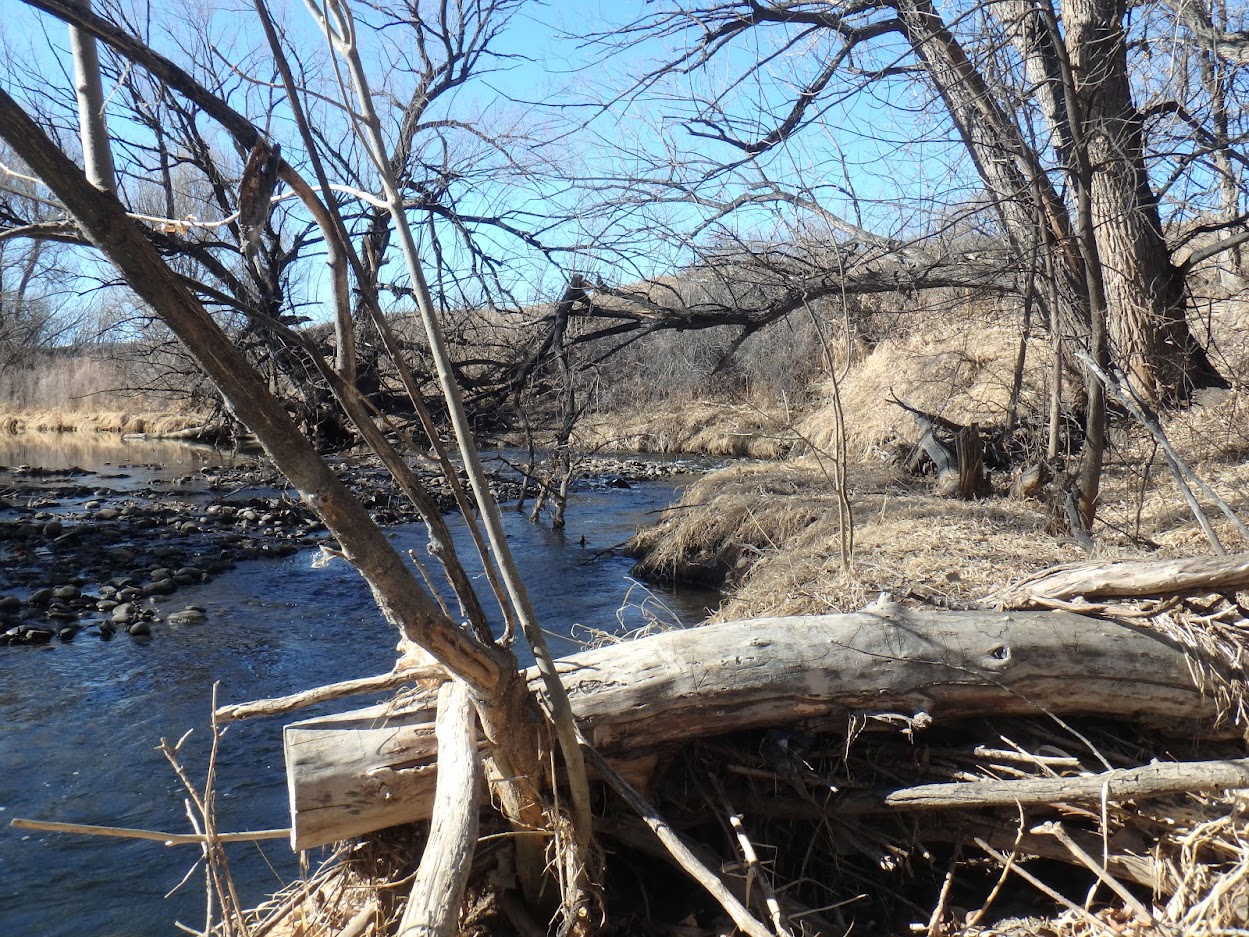 Upstream from Our Lunch Spot

Clearly the highlight of our Groundhogs’ Day adventure was our lunch. We found a nice high grassy bank on the north side of the stream in the sun, and we casually consumed our snacks while catching up on our lives.

Naturally a few fish in the net would have been very rewarding, but we both agreed that seventy degrees in February was a gift from nature to be enjoyed. We explored a new section of Boulder Creek; but the cold water temperatures, lack of insect activity, and low water conditions conspired to prevent any level of success. I remain undecided as to whether I would give the section of Boulder Creek another try, but now I at least know the area and what to expect.